Fourteen experienced hikers had been invited by Martin and Sue Bamfield to join them in the take over of the wonderful Eastfield House in Leyburn North Yorkshire for a weekend of banter with some walking thrown in for good measure.
Apart from Martin and Sue and Sheila and I, the party consisted of Conrad, Mick and Gayle Blackburn, Graham Brookes, Humphrey and Mary Weightman, Mike and Marion Parsons, Sue Oxley, Ali Ogden, Richard and Jennie Craven.

Friday evening's meal was wonderful, provided by Martin, consisting of luxury fish pie, meat or veggie lasagne. I think most folk had all three.
The evening passed all too quick and i wished i had taken a few more bottles of Holts Two Hoots.

I was particularly interested in Mike Parson's new venture which he with the help of others is putting together. Its basically about training the trainers on outdoor fabrics. It's far too much to go into detail here but check out the facebook page to get a better idea.

Saturday, 12 of us drove to Redmire station from where our walk started. Martin had the route and i made the mistake of not downloading the map onto my iphone. Having paid the OS to have the UK at 1:25,000 i never checked my downloads. Hence, i just had a red arrow on a white screen. I learned a lesson today.

Looking out across Wensleydale.
We had our first meander in the village of Redmires but normal service was quickly resumed when a footpath sign was spotted a little further on.
Apedale Beck was crossed by a sturdy footbridge and led across fields to Bolton Castle. It was quiet here, no hordes of visitors, no cars or voices, just the aroma from the rising smoke from numerous chimneys.

I was suffering with a dodgy knee, the cause is still under debate, could it be worn out cartilage or is it arthritis? The jury is still out. However, it isn't pleasant. I decided against my better judgement to use walking poles. This is the first time i have ever walked with them and will probably/hopefully be the last. What i noticed from the off was that i couldn't be bothered releasing myself from the pole straps to get my camera out to take pictures as and when. All rather frustrating. Its the learning curve you know.

It was a dry muggy sort of day but with lots of dark clouds intermittent with bright. Some times it looked as though it was about to pour down whereas at other times you could sunbathe. 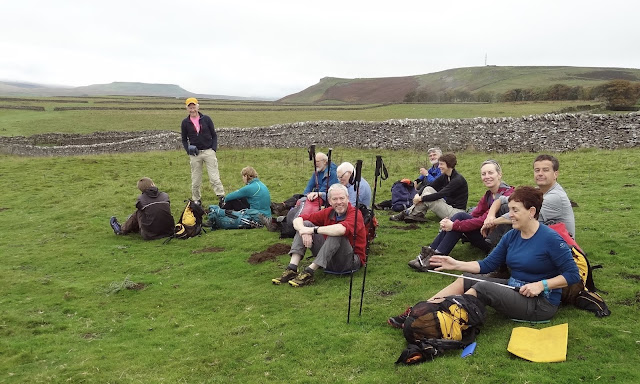 We had a quick break for coffee at some point north of Carperby.
Down beyond Carperby we crossed the River Ure and decided lunch was about due and following that another meander, so it was duly taken. I think we should be called the Backwards Walking Club. Meanders are fun though and should always be included somewhere within a walk. In fact they should be compulsory.

A huge steep hill (cough) led us into Aysgarth. A lovely village and worth a visit. We entered and left quite quickly, it may have been due to the plague, i'm not sure. 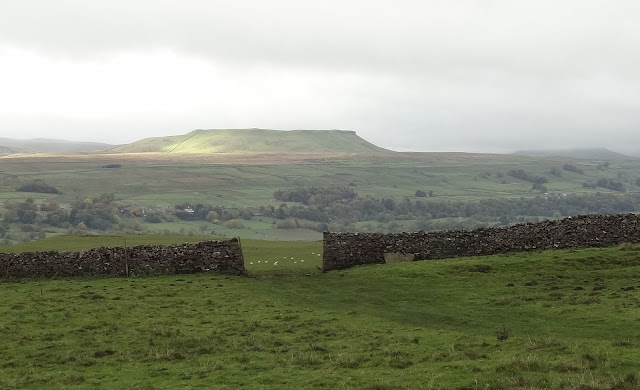 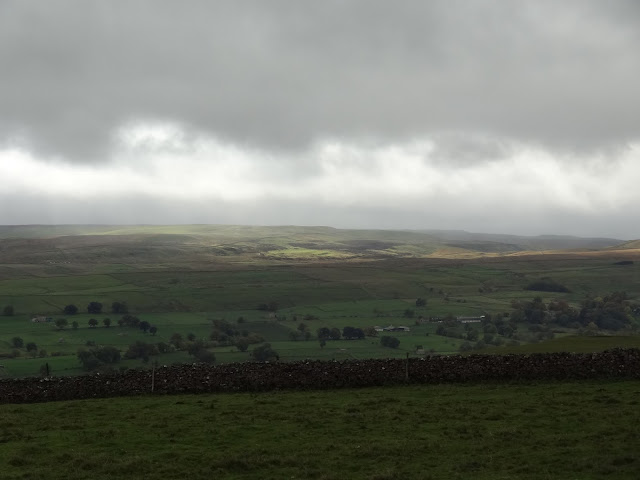 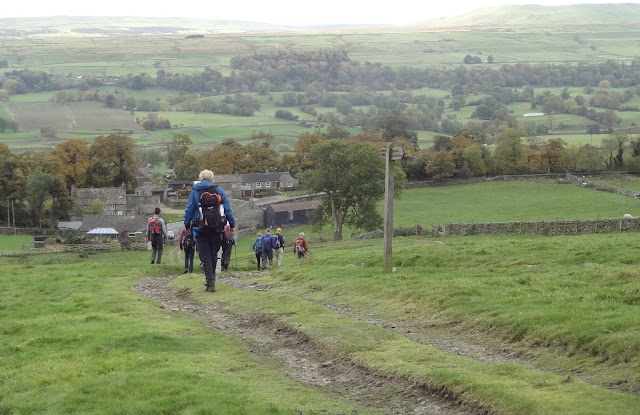 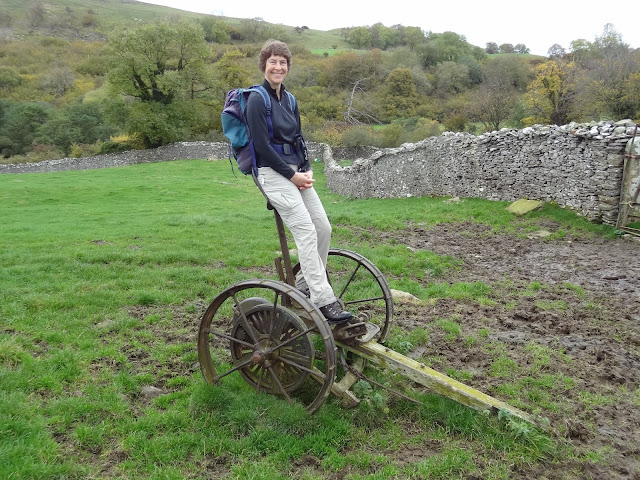 Sue, astride the Ben Samualson, Bambury Mower circa 1900. 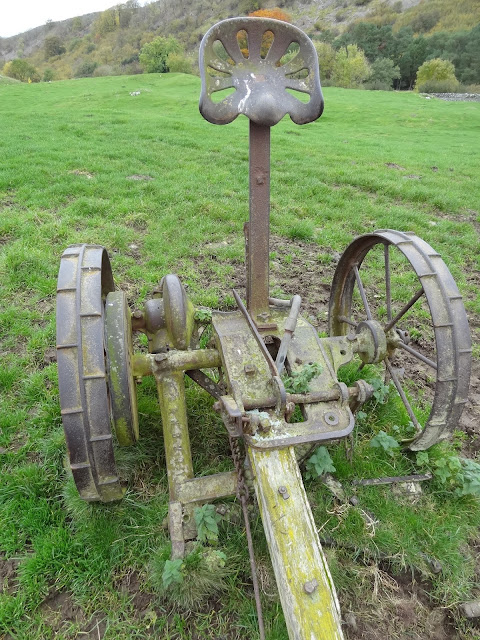 (Two images above.) Due to another very impressive meander, which you really had to have been there and done it to appreciate that this meander was a catagory "A".
We stumbled upon this fine mower. There seems to be a growing number of agricultural vehicle lovers amost the blogging community so a little history here won't go amiss.

The mower was built by a splendid chap called Ben Samuelson in his factory, The Britannia Works at Bambury in Oxfordshire. This chap was a special person, way before his time. He looked after his workforce in ways that puts todays rich company owners to shame. The wages he paid to employees was double the average in the area, he looked after the welfare and education of the families. And visa versa they looked after him too, producing 650 of these machines as well as numerous other pieces of agricultural equipment per month. They were so well made there are still many examples of this horse drawn mower to be found up and down the country. We saw two on this walk alone.
This one dates at about 1900-1905. 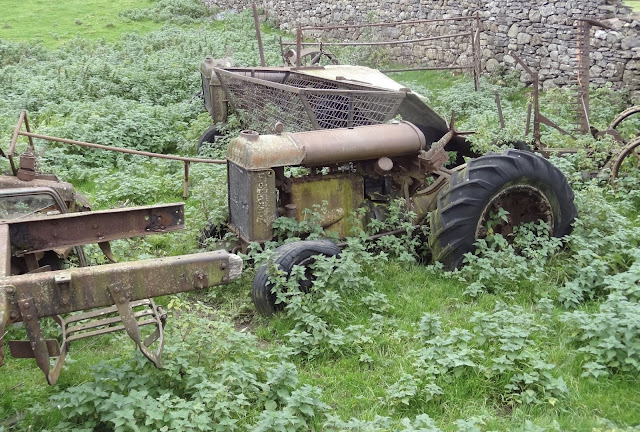 The above image shows two Fordson type N tractors dating from around 1937. Its a shame that they are in a graveyard and not being restored. I wonder how much i can get them for. (Just kidding Sheila). Just to the right is another Samuelson mower. 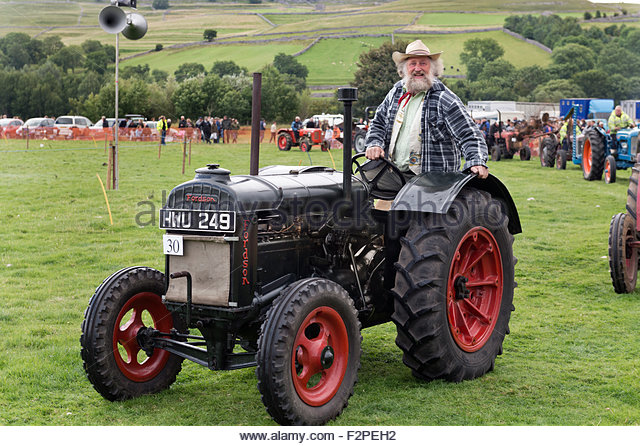 This is what they could look like restored.
Anyway i have started a meander of my own here. So back to the walk.
Just before we got to Aysgarth upper falls we crossed a camp site where a motor home had become bogged down. The arrival of a dozen willing hands must have been a sight from heaven. But we looked the other way and walked on.
Of course we didn't, we tried our best but it was to no avail, we couldn't get it out of the grass. A restored Fordson would of though.
The falls were busy with visitors as its on a roadside and there is a cafe. A few photographs and then away from the bustle we went. 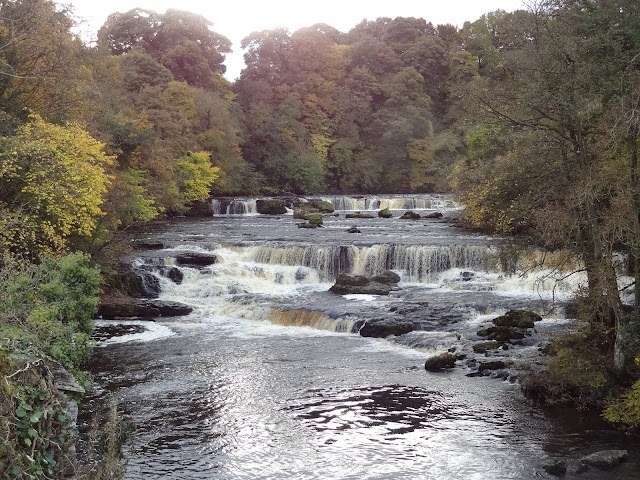 Aysgarth Upper Falls
The Upper falls lacked a bit of power due to the good weather recently but the lower falls were a bit more spectacular, good force and sound. 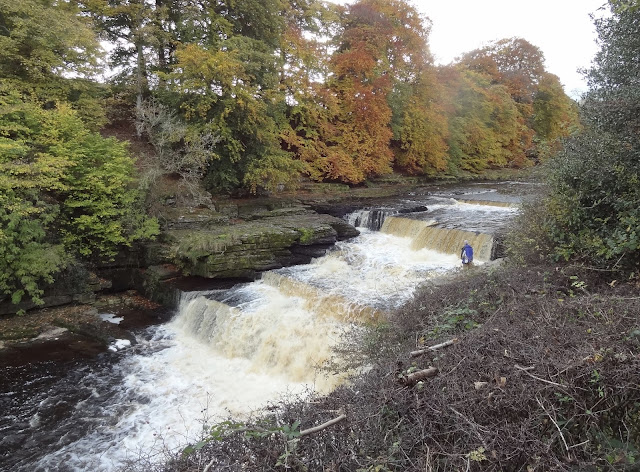 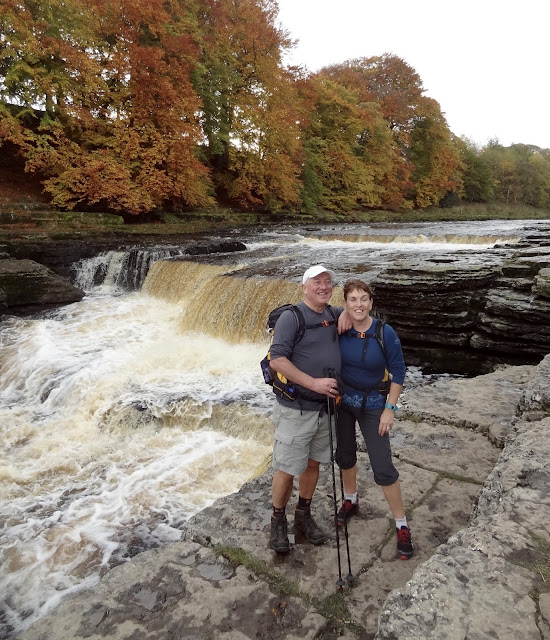 Sheila and I, photo taken by Mick Blackburn. 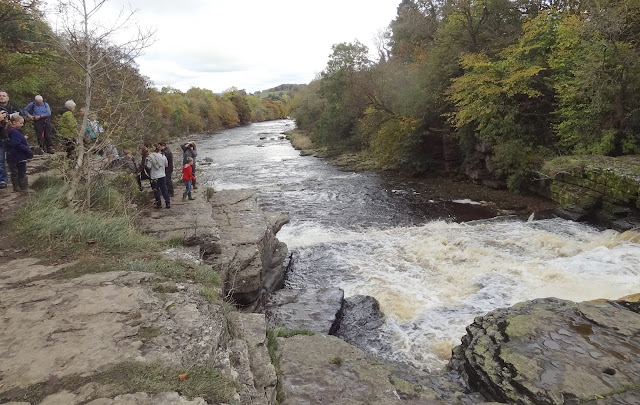 The group shot off, heading downstream, we hadn't realised until we were last 2 standing. Getting back onto the footpath we spied and caught up with Conrad and within a minute or two saw the disappearing heads of the group. At this point Sue caught us three up, she too had somehow gone astray. This was not classified as a meander.
The sun came out and blue skies made for a warm afternoon. Castle Bolton was bathed for a few minutes, just enough for myself and Mike P to get a photo. 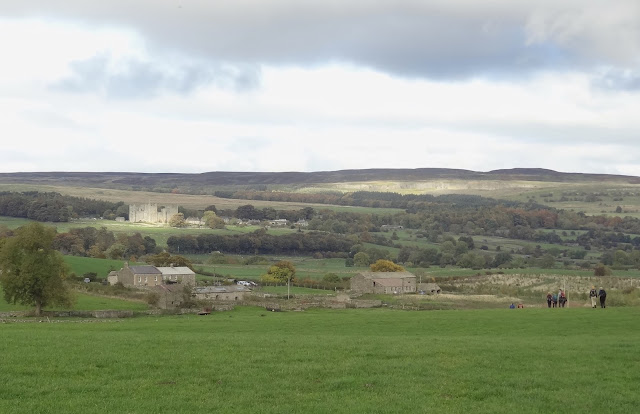 The group, well ahead must have been chatting because some went the wrong way and had to backtrack which allowed us slow coaches a chance to catch up. A couple of high stiles had to climbed and i slipped on the downward step and clobbered my sore knee, it had to be that one didn't it.
In a bit of discomfort i soldiered on.

Approaching Redmires our path had a sign which said "NO RIVER CROSSING HERE". Well that was all it needed for the advance party to see a bit of a challenge. Off we went to find the river. When we got there, Apedale Beck, it was hardly in spate so Martin, Sheila and I splashed through the knee deep pools, Graham B decided he wanted a bath and so belly flopped into the cold throwing his rucksack into the water just for good measure.

The rest, decided to use the bridge which was about 20yds further up stream. Wimps thats all i will say. So i ask myself "why the sign saying no river crossing here". PASS.

With only a short distance from our start point i didn't empty my boots of the water but squelched my way back. 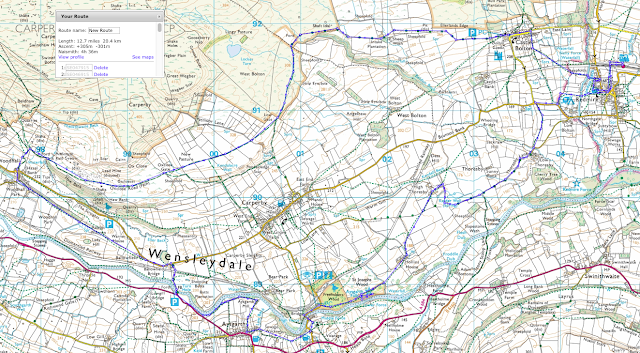