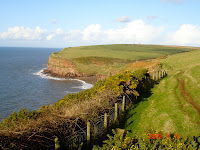 A few weeks ago Sheila and I walked some of the Coast to Coast route. After we had been going about a hour we came across Fleswick Bay. It looked really nice and we said at the time we would come back and spend a bit more time here.
This weekend we decided due to the lousy weather forecast to do just that. On Thursday night we drove up to West Cumbria, to Sheila's mums. It hammered it down most of the way and there was a lot of flooding. We picked up Dorothy and went for a couple of beers in Gosforth Hall.
Friday morning we drove to St Bees in wonderful sunshine. So different to yesterday, and we set of walking along the Coast to Coast path.
It was so bright, that from the viewpoint on St Bees Head we could see Isle of Man 30 miles to the west with the twin Peaks of Snaefell and North Barrule clear, the Scottish coastline and hills behind was also visible. Getting down to the bay from the path was a bit precarious as the sandstone bed was very slippery. But it was worth the effort.
We explored the cliffs and rock pools. The sandstone weathering was fantastic especially where the water had come down the cliff faces from the land above and worn the ground rocks into what looked like red icing. (See pics in gallery.)
The remains of a large engine, a gearbox, a transfer case and some winding gear can be seen in the surf. These are possibly the remains of the fishing boat Coeur de Lion, (Lion Heart) which foundered in 1993.
The light was just fantastic as the clouds were lit by a watery sun and the surf caught the rays as well. Its difficult to explain the beauty of Freswick bay but have a look at the photo's and you will get my drift. Its a great place to spend an hour or two and we never saw a soul.
Posted by AlanR at 9:15 PM