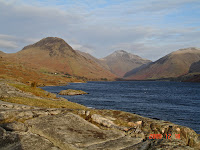 With a poor weather forecast predicted we decided to do a quick dash up to Cumbria and stay over at Sheila's mums. We drove up 1st thing Friday morning and it was very cold as we set off. The car said -4 degrees. On the way over we decided to go up Whitfell as its only a quick bimble. The views were fantastic although not as much snow as we thought there would be.
When we picked Dorothy up we decided to go to Wastwater and take some photo's. (Some pics in the gallery) It was a beautiful clear day but very cold and windy and you needed to be well wrapped up. We had a bit of a stroll as it was too nice to miss but the thought of a nice malt scotch and a pot of coffee was called for. We got back to the car and headed off for the Screes pub at Nether Wasdale. Pity i had to drive but i would make up for it later in the Gosforth Hall hotel.
One of the reasons we went was to try out the Golite Fly trail shoes. They surprised me how good they were, even on frozen ground . I thought i would slide everywhere but they were quite stable. Another good buy.
Driving back today, we decided to go over Birker fell and get some photo's of the Scafell range. When we got up there the cloud base was too low and we couldn't see any of it. More's the pity.
We then headed over to Seathwaite, Duddon valley to deliver christmas presents. From here we headed home just as the weather was turning stormy.
Posted by AlanR at 3:45 PM