On the recent camping weekend when we tried out the Scarp 2, our old tent light packed up.
I therefore had the opportunity to have a look what was available and buy a new one.
We both have Petzl elites and use them a lot. Personally i think these are the best for a light weight backpacker. I wear mine on my wrist almost permanently when i am walking, it’s light and unobtrusive and can become a talking point in the bar when you get asked what’s that or why do you wear 2 watches etc. It also makes it easy to find when in the tent.
However during those dark extended times in the tent you need something a little more extensive than the 16 Lumens of bright white light provided by the elite.

I scanned the web and what i finally decided to buy was the Black Diamond Orbit Lantern.
When i first came across it, i thought, too big, too heavy and it’s a lantern, something i don’t usually go for. But when i delved a little deeper and to my surprise found it only weighed 85gr and 132 gr with the 4 AAA batteries. So i ordered it. 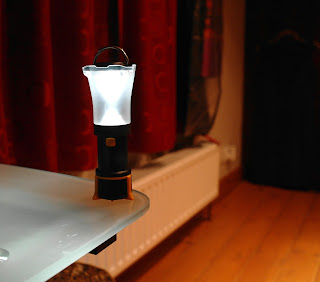 Reading the enclosed paperwork i noticed that the stated Lumens was 32. I had been expecting 45 as per  the ratings stated on a number of web sites.
I sent emails out and it seems that Black Diamond have 2 generations of this lantern in the market place but for some reason they seemed to have forgotten to tell the retailers.
So you can get the same lantern with both 32 and 45 Lumens output depending on the luck of the draw and yes, they are the same price.
2 web based retailers i contacted did some checking and confirmed the above. They checked their stocks and one found a mixture of both generations and the other only had the first generation 32 Lumens version.
Both were pleased that i had raised this issue with them and amendments to the web pages followed.
The company that had the 45 Lumens lantern offered to swop mine for the G2 version. Extremely kind of them. Thank you for that offer.
The other only had the 32 Lumens but did offer me a 10% discount on my next purchase before the end of the year. (that was if i was going to make one of course).
I have decided not to name these 2 retailers as numerous others sites have made the same mistake and it wouldn’t be fair to single these 2 out. 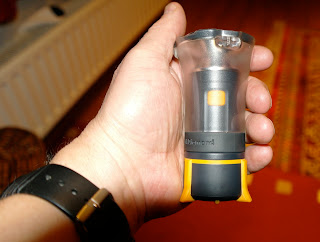 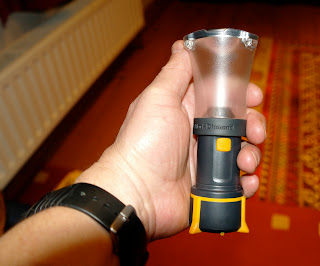 The globe is frosted and this reduces the glare and that sharp white light effect that LED’s produce. Within the extending globe there are 2 light reflectors that enhance the 1 watt light and maximise the output.
The switch is excellent and not just on/off but also dimming to save battery life when full power is not needed.
The lantern always turns on at the brightest power setting and by holding down the switch you get the dimmer working.
When either the lower or highest light setting is reached the light flashes.
On high setting the 32 Lumens will last for 10hrs and on the lowest setting it will last 24 hrs. The emitted light radius is 2metres. (6.5ft approx). 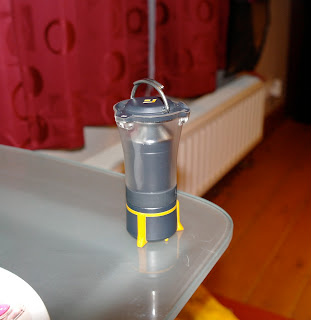 The lantern has a split loop at the head so that you can hang the lantern or it has 3 legs attached to the base to give firm support.
It can also be used outside and is stormproof although not submersible.


Black Diamond also supply the NRG2 Rechargeable Battery Kit (with Battery Power Indicator) but it’s a very expensive bit of kit and i doubt that many people would opt for it.

It is also warrantied by Black Diamond for 3 years which is excellent. It’s a well made piece of kit, robust and well thought out and is nicely balanced. I like it very much.

Quite light for a lantern Alan, I'm coming round to the idea of a bigger tent light for winter when you spend more time in the tent. I have a Luxeon lantern (same as the Alpkit one) but it's heavy at 205g and doesn't collapse down for packing. The only thing I've found with lanterns is that they tend to cast their own shadow directly under where the hang, how does the Black Diamond fare in this respect?

hi Richard
You do get a bit of shadow underneath. But with the globe being wider than the base the shadow is less than it would be if it was a parallel lantern.
The Luxeon is 3 watts so it will be a brighter light than the BD i assume.
Thats probably why it’s heavier too.

Is that a Suunto Vector I spy on your wrist...

Maz,
Very good. Correct.
I am not a huge fan of it though. I cannot recommend it.

Do you have both the 32 and 45 lumen versions? How do they compare? Is the 13 lumen difference very noticeable? And how does battery life compare?

Anonymous,
No i only have the 32 unfortunately. So i cannot do the comparison you have requested. Sorry about that.
If you are interested in one of these then i know for sure that Ultralight outdoor gear have the 45.
Thanks for your comment.