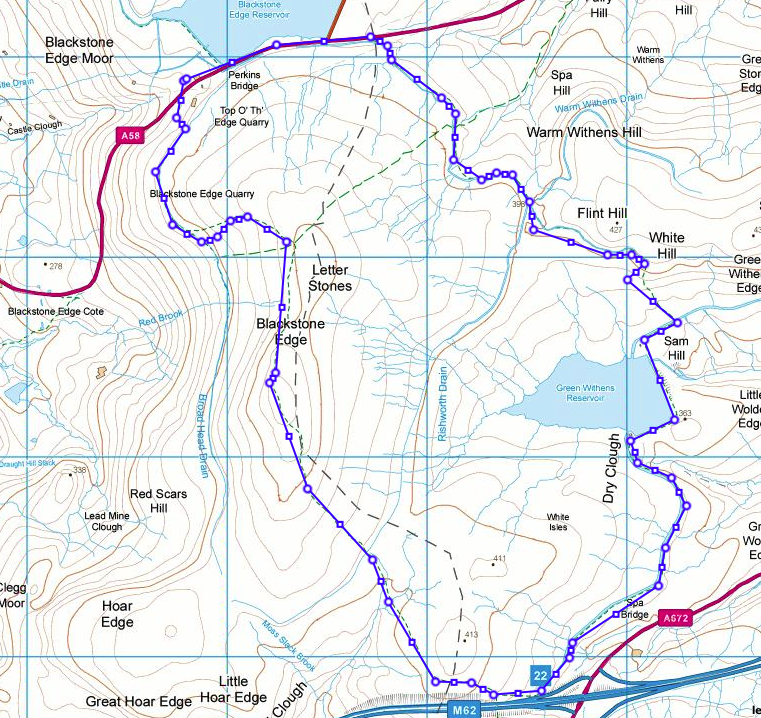 Start and finish was the car park next to The White House restaurant, which is on the A58 just left of Blackstone Edge Reservoir. SD 968178

Yesterday (Saturday) i tried out the knee again doing a local walk of around 6-7km. Having returned home with nothing detrimental we decided that we would try a “Proper” walk and see how that goes.
The forecast overnight was pretty chilly with frost and temperatures falling to -3C.

Driving to the start point was easy enough once i had defrosted the car which seemed to take ages, all the roads had been gritted. 5 other vehicles were already in the car park when we arrived at about 9.50am.

It was certainly chilly around the ears as we donned our boots and jackets but it was a clear day in the majority of directions except over Manchester which was misty.

We crossed the A58 and headed for the trig point on Blackstone Edge. The grass was crispy white and all the puddles left by the recent rain had frozen into beautiful shapes and patterns. In front of us was a guy walking his dog. His breath clearly seen against a blue backdrop.
The sun was low to the SSW, we needed sun glasses on. 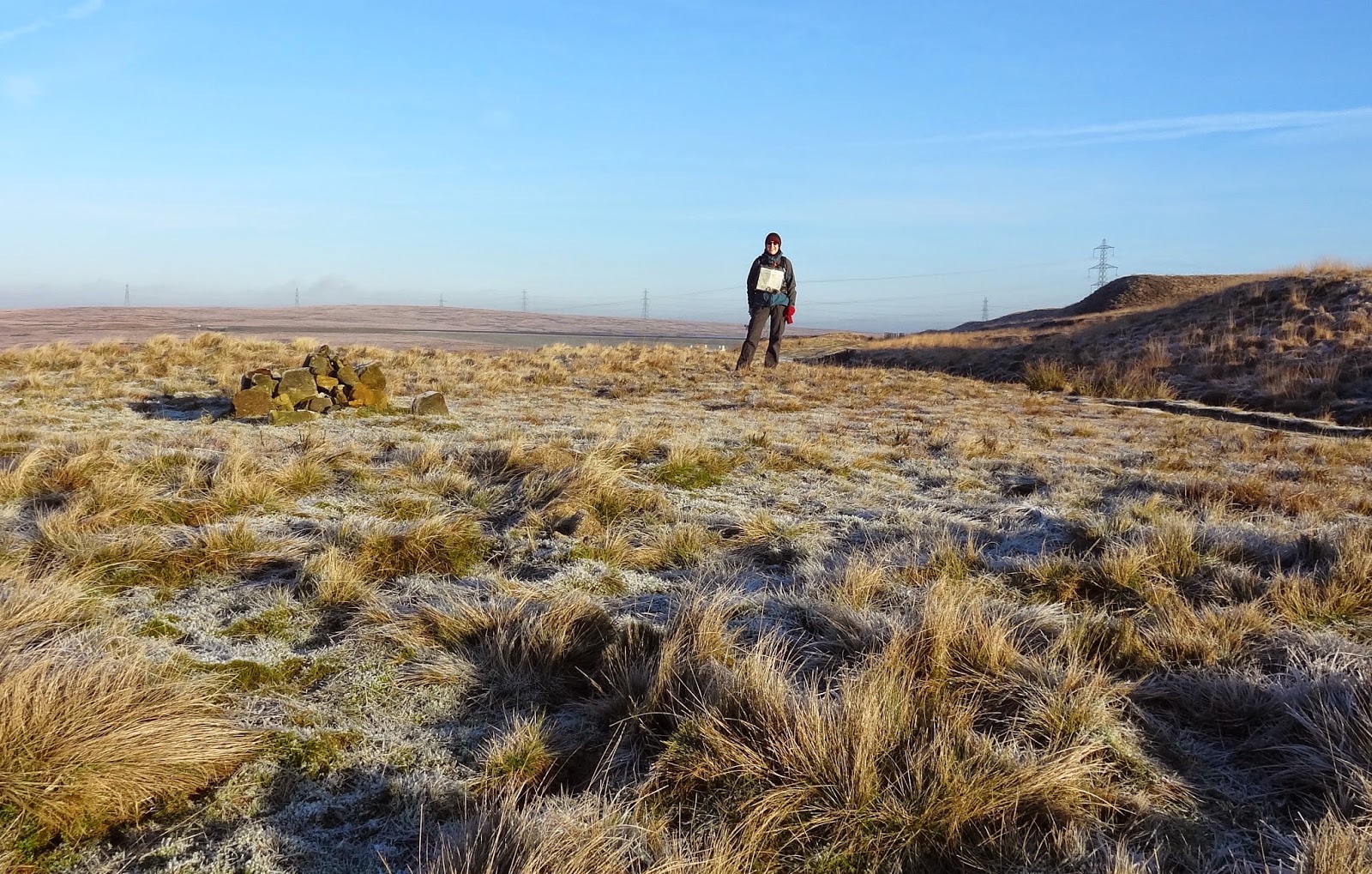 Starting along Blackstone Edge
We followed a water collection channel instead of going straight up onto the moor and this led us round to the Roman Rd. The outcrops of the edge were looking splendid silhouetted against the low sun.
We followed the Roman Rd as far as the Aiggin Stone, a centuries old marker for travellers at this important moorland cross roads. 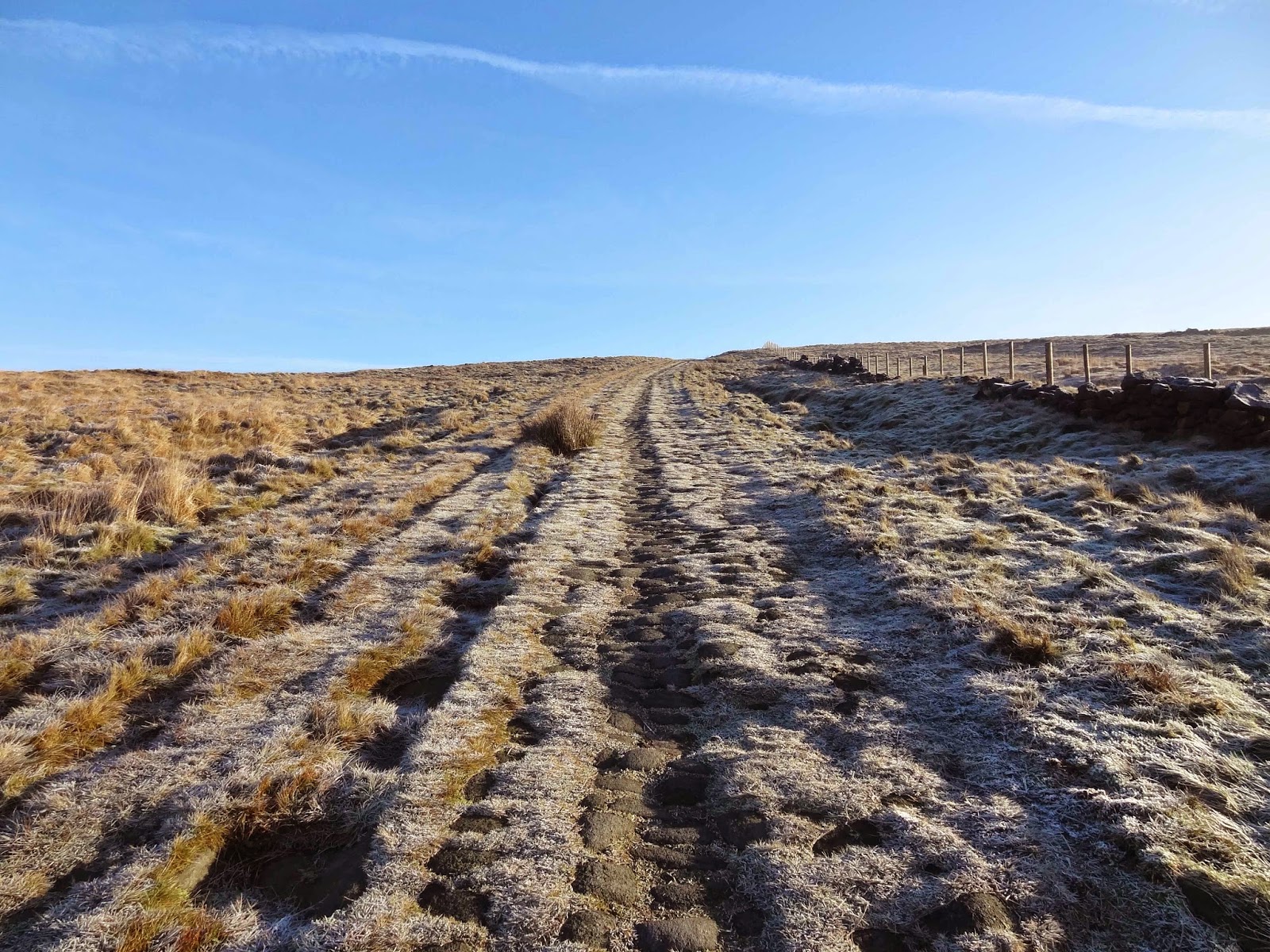 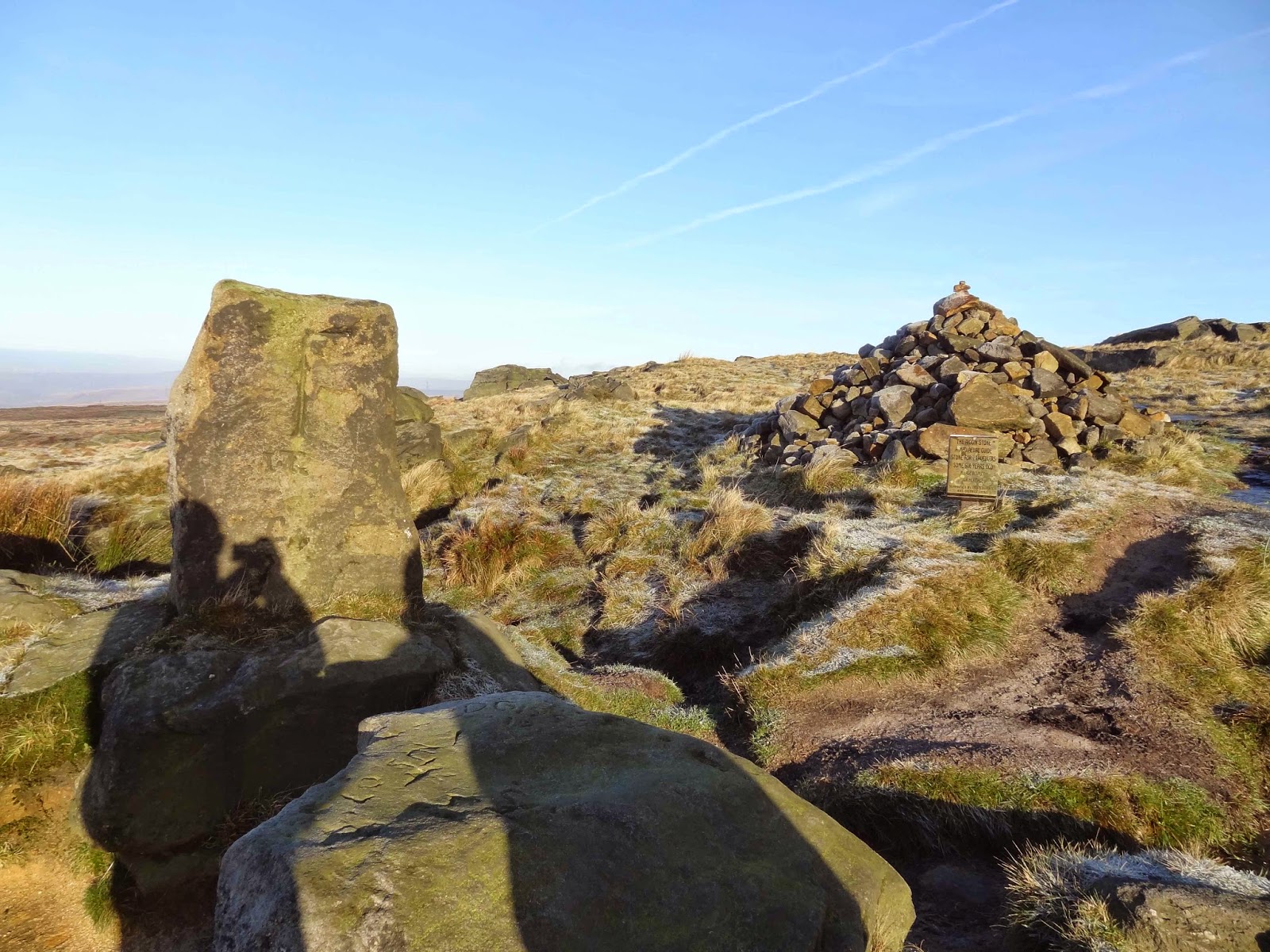 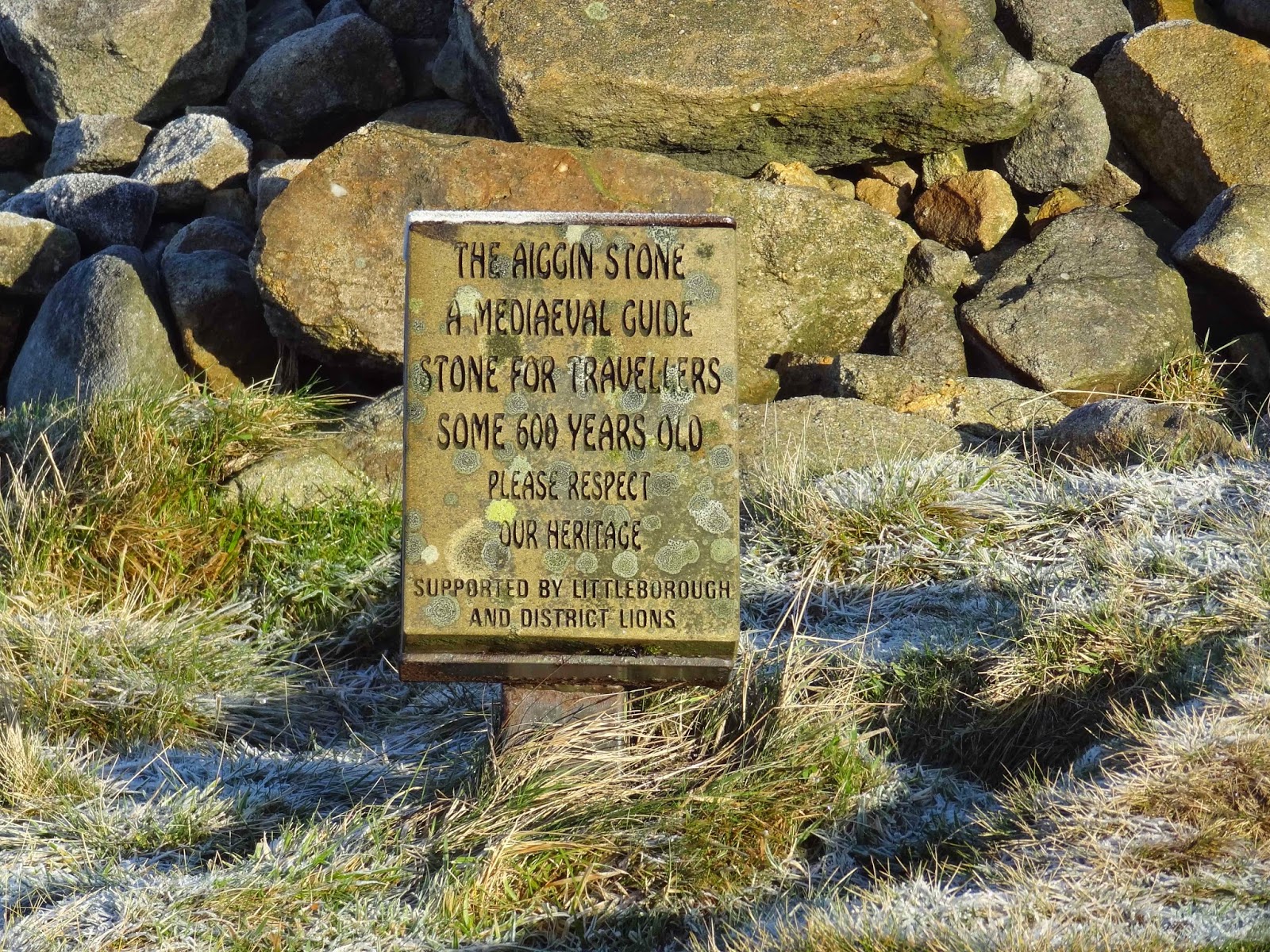 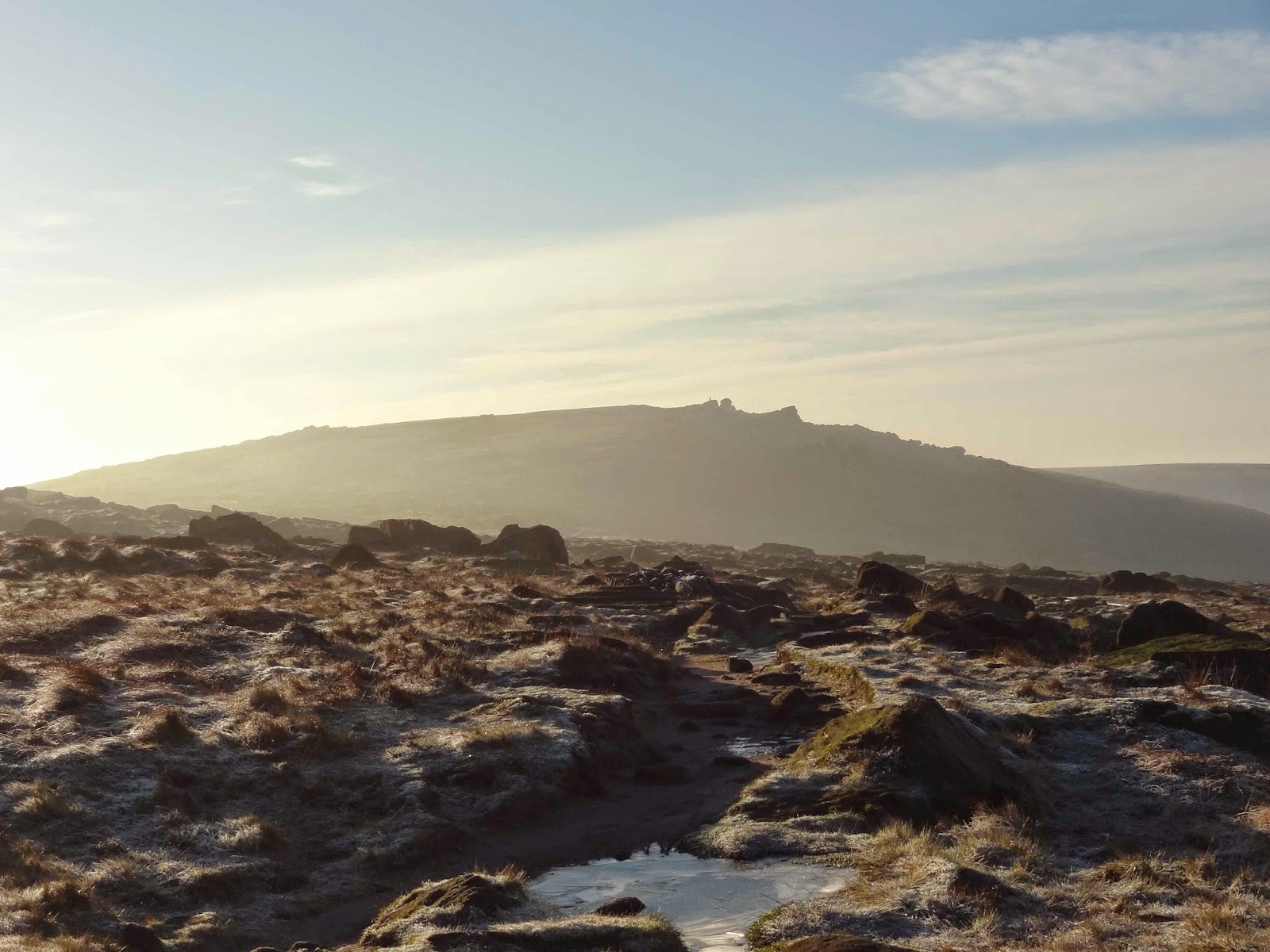 Blackstone Edge Top.
The walk up to Blackstone edge was fine due to all the mud and peat bog being frozen. I was cautious as i didn’t want to slip or do any ice dancing and stress out my knee. It was a constant worry.
It was so good to be out again though especially on a day like today.
At the trig point we stopped for a few minutes enjoying the scenery. No wind, unusual for this location. We had the top to ourselves and with no others in view. 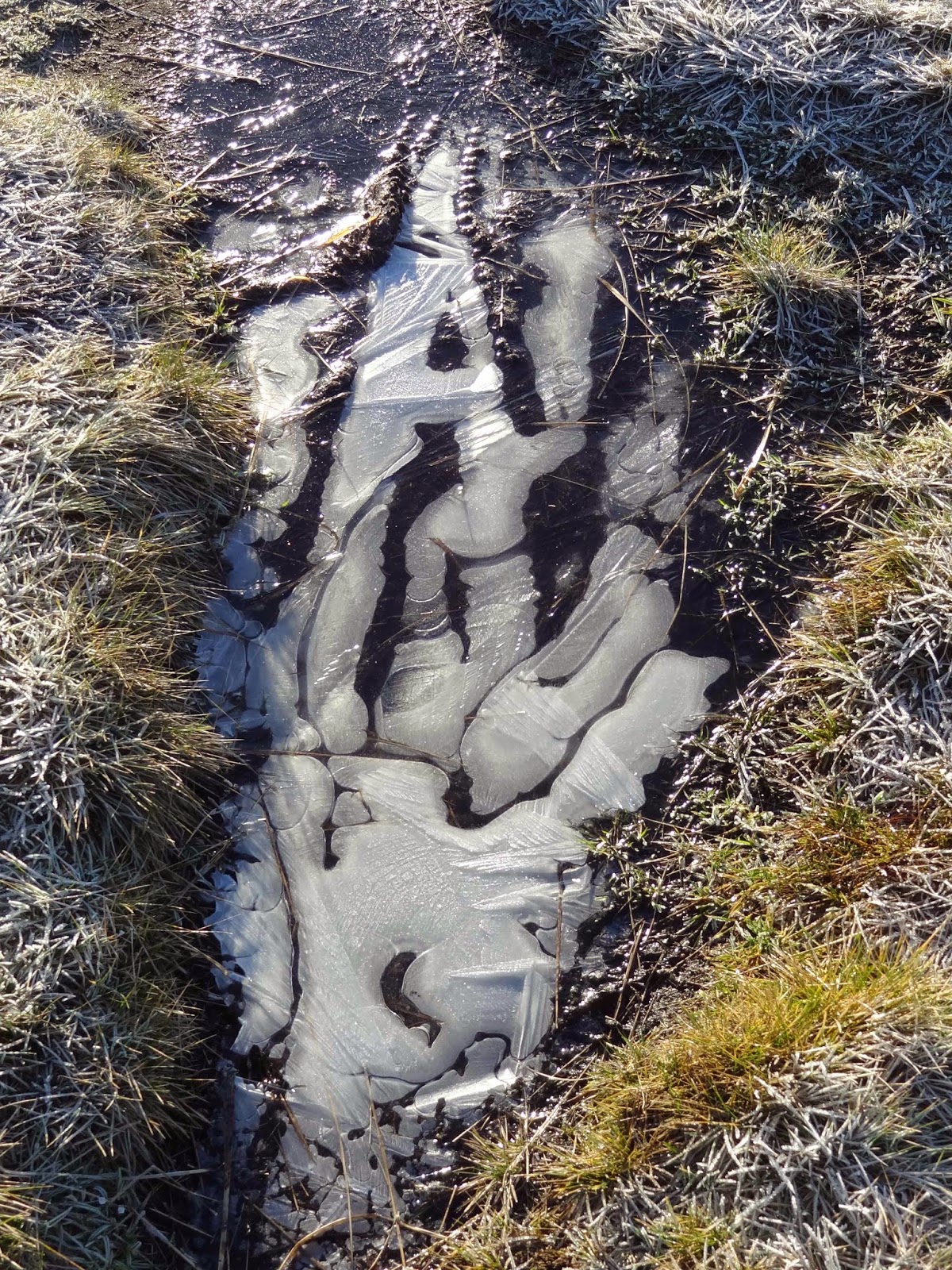 We though this frozen pool resembled a skeletal foot. 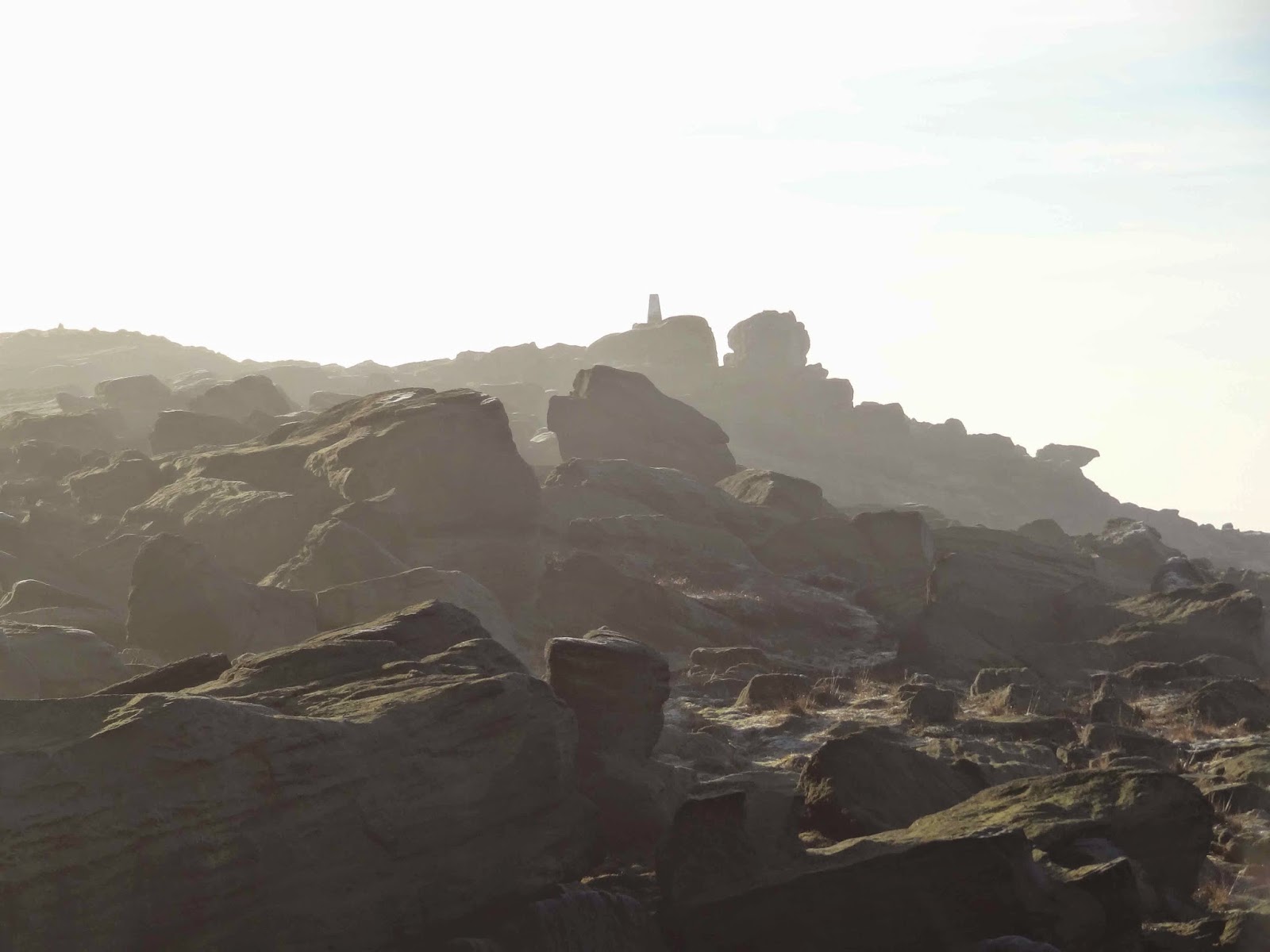 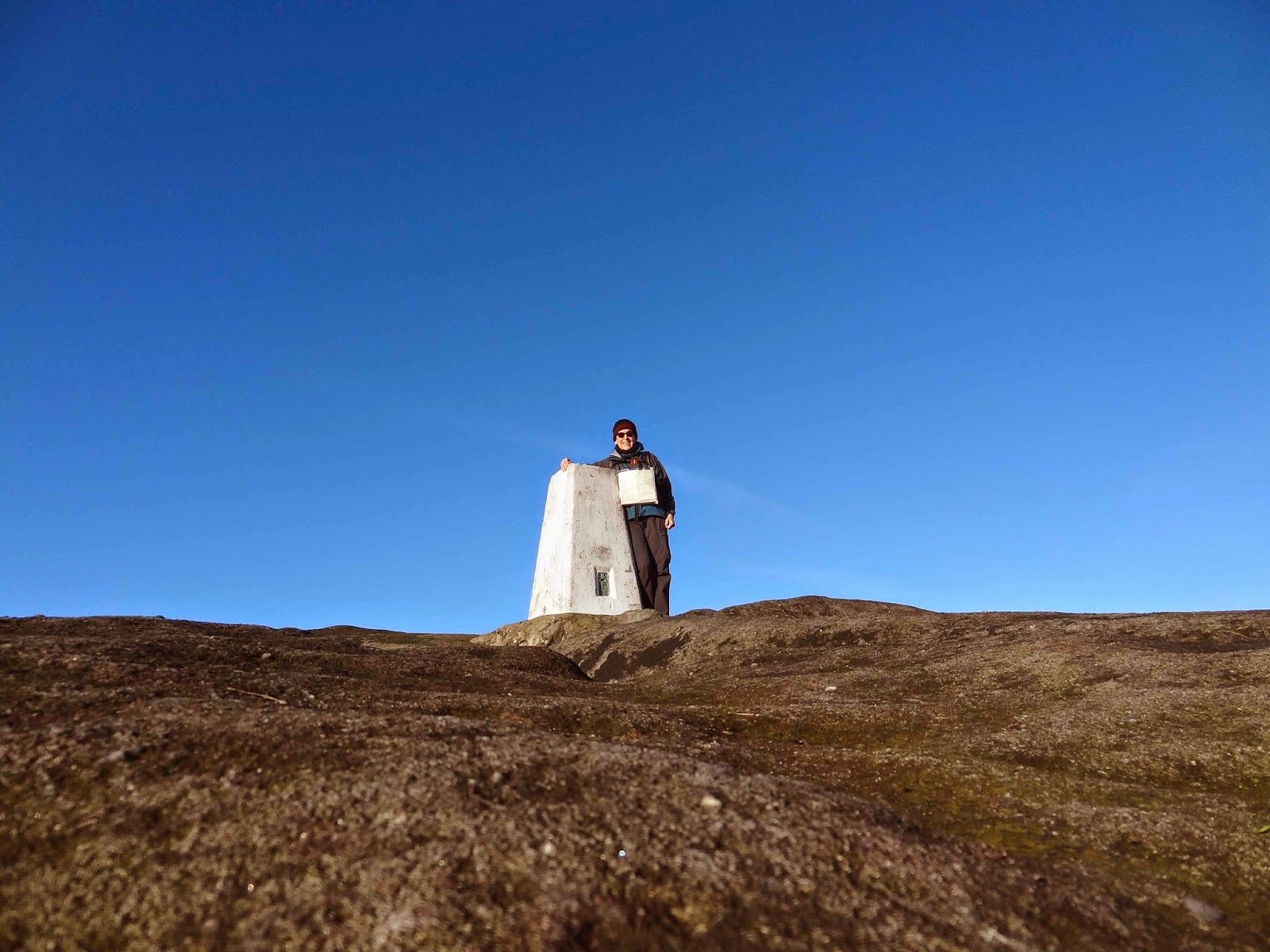 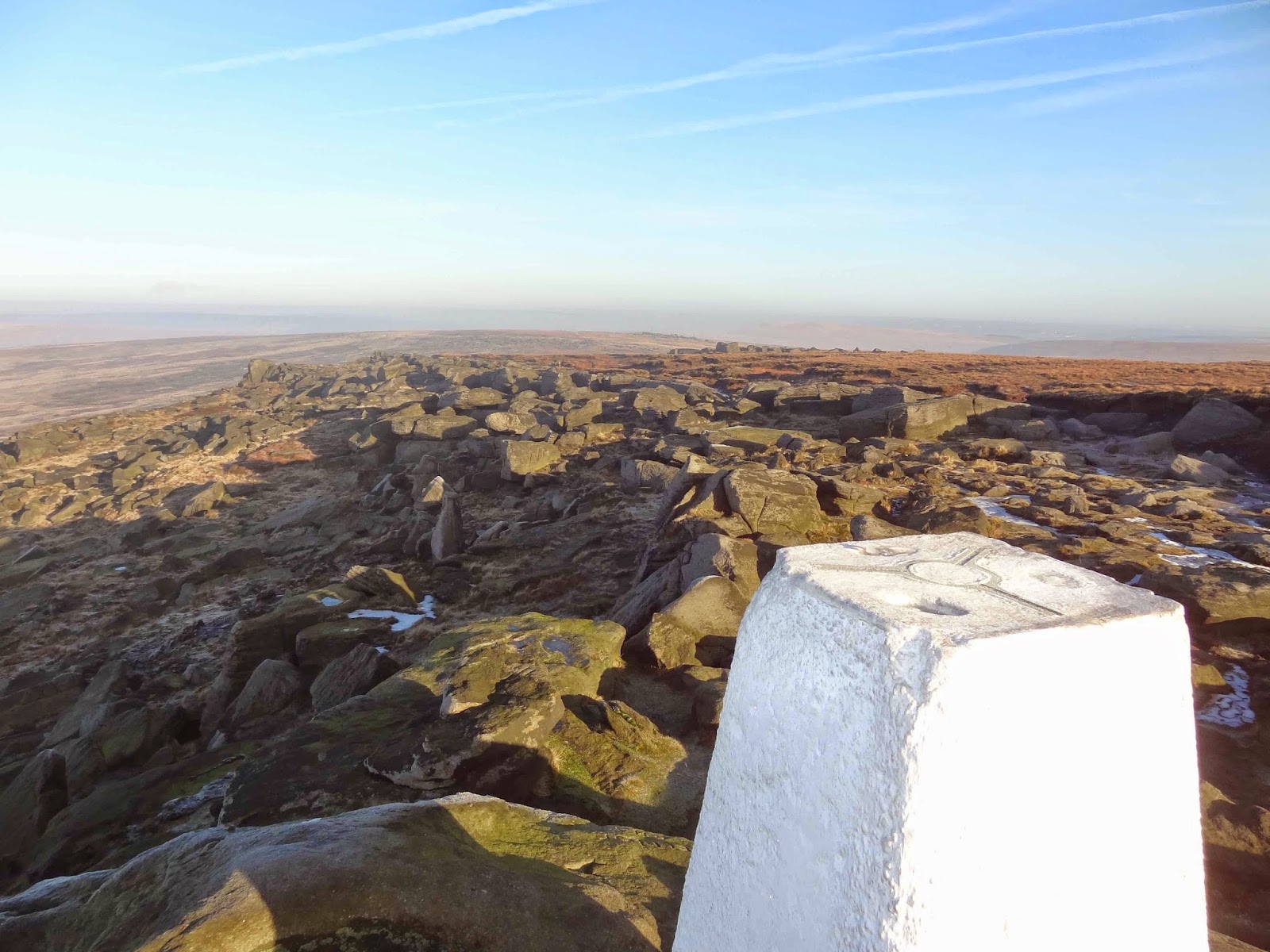 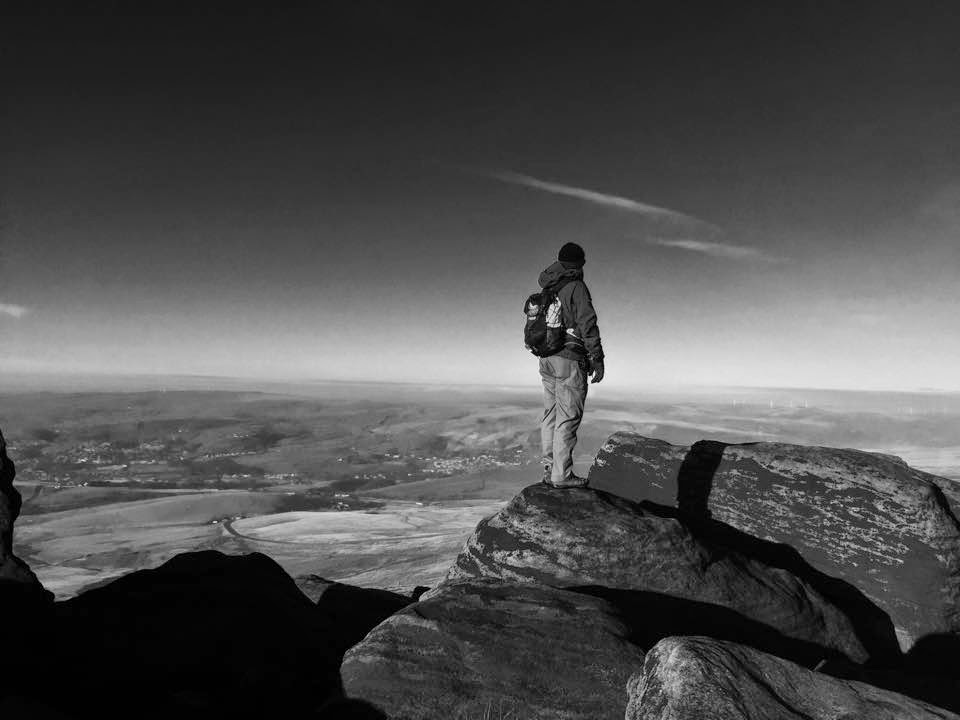 Now that we had gained the highest point the low sun made it even harder to see the path. We had the massive mast on the south side of the M62 in our sights. Our route would follow the Pennine Way to the bridge across the M62 but we would go east just before the crossing.

A few walkers crossed our paths along this stretch. Like us they were well wrapped up. The pennine way here has been paved and although it is better than negotiating the otherwise deep peat bogs today the slabs were slippery.

Approaching the M62 is quite strange as the traffic noise can be heard from some way off but its not until you are almost upon the road that you see the motorway. The planners did a good job here hiding it. Sheila actually asked me “So where is the motorway” when only a hundred yards away from it. It runs through quite a deep cut. 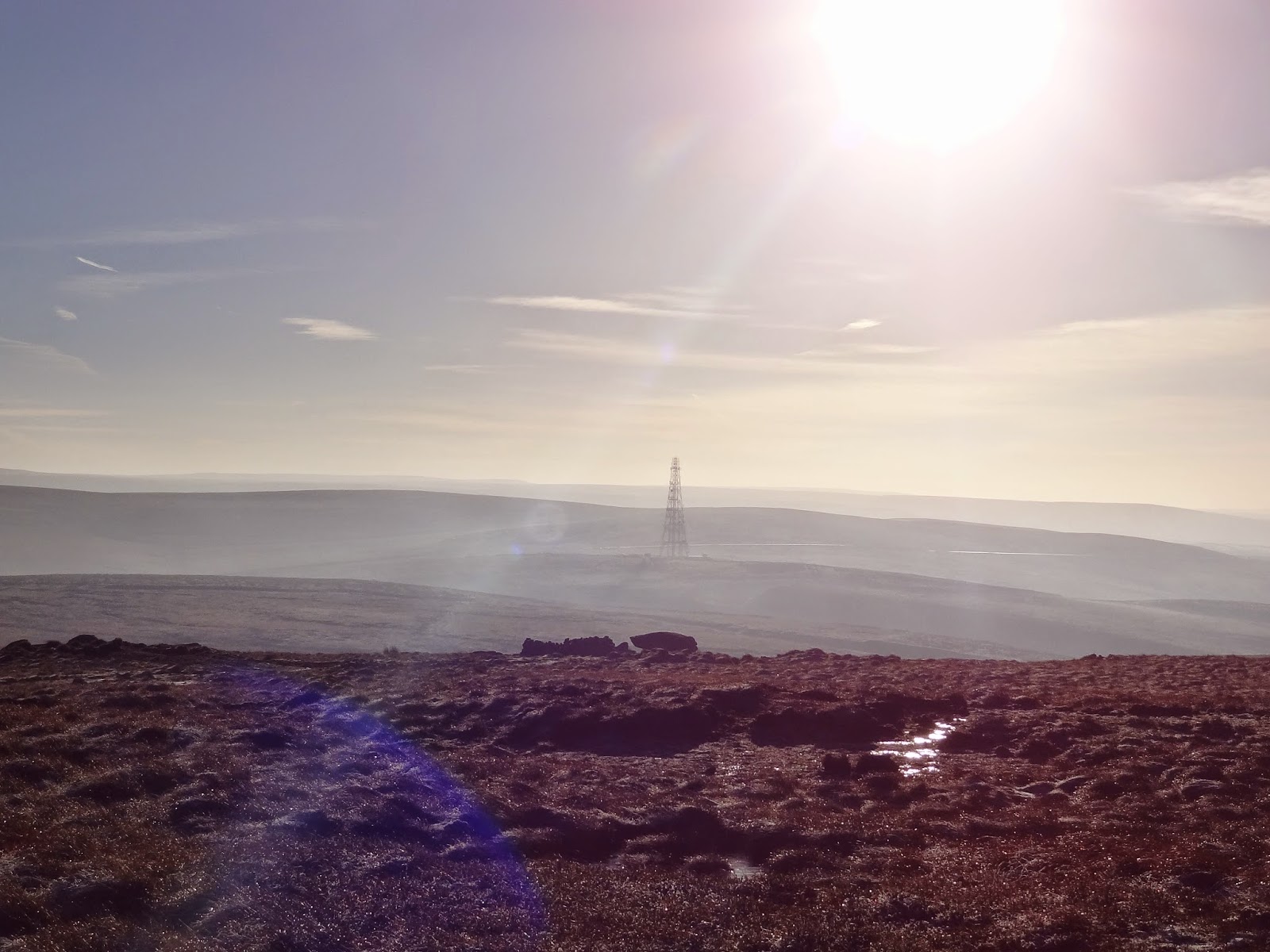 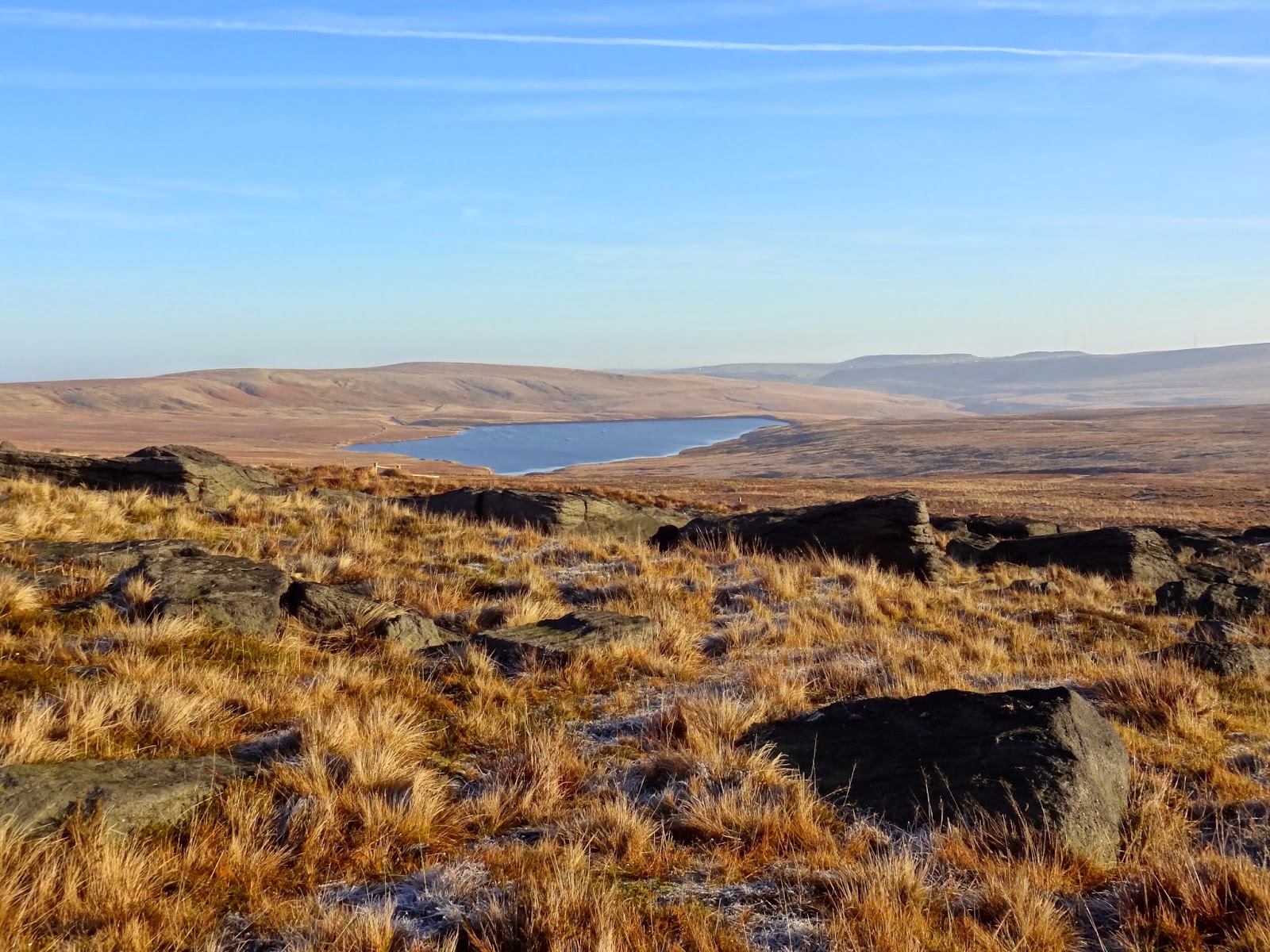 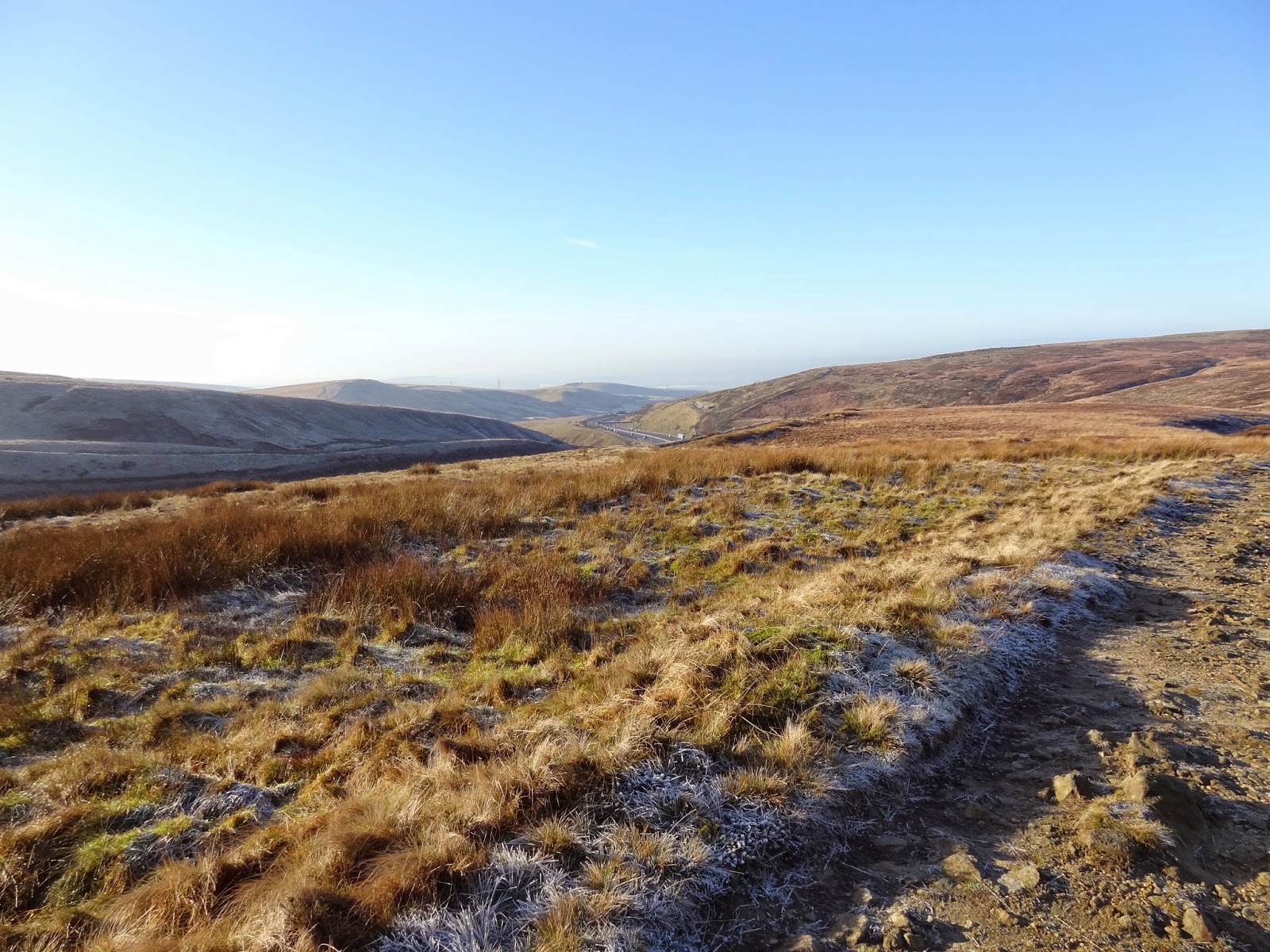 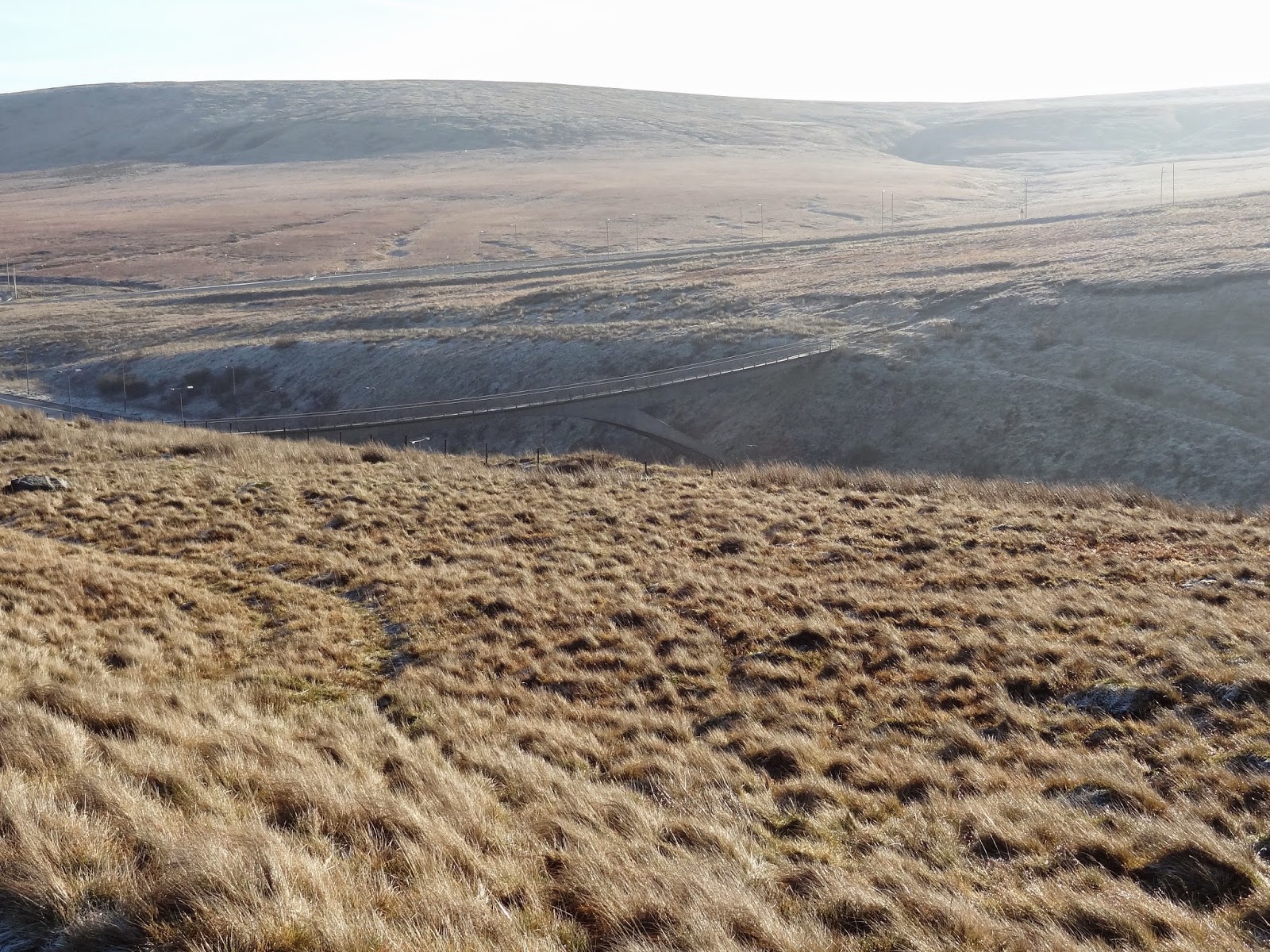 From here we headed for Green Withins reservoir. I picked up a good path heading in the general direction but quickly realised it was a mistake. I inadvertently had picked the county boundary path. A quick about turn had us back at the bridge entrance and the correct path following a water channel.
Along this embankment we heard engines and moved out of the way as 8/9 off road bikes passed us.
The embankment  was deeply rutted in parts and so its obvious this is a regular route for them. Further along a sign came into view which says, …..well you can read it yourselves below.
Obviously no one from Yorkshire water is trying very hard. 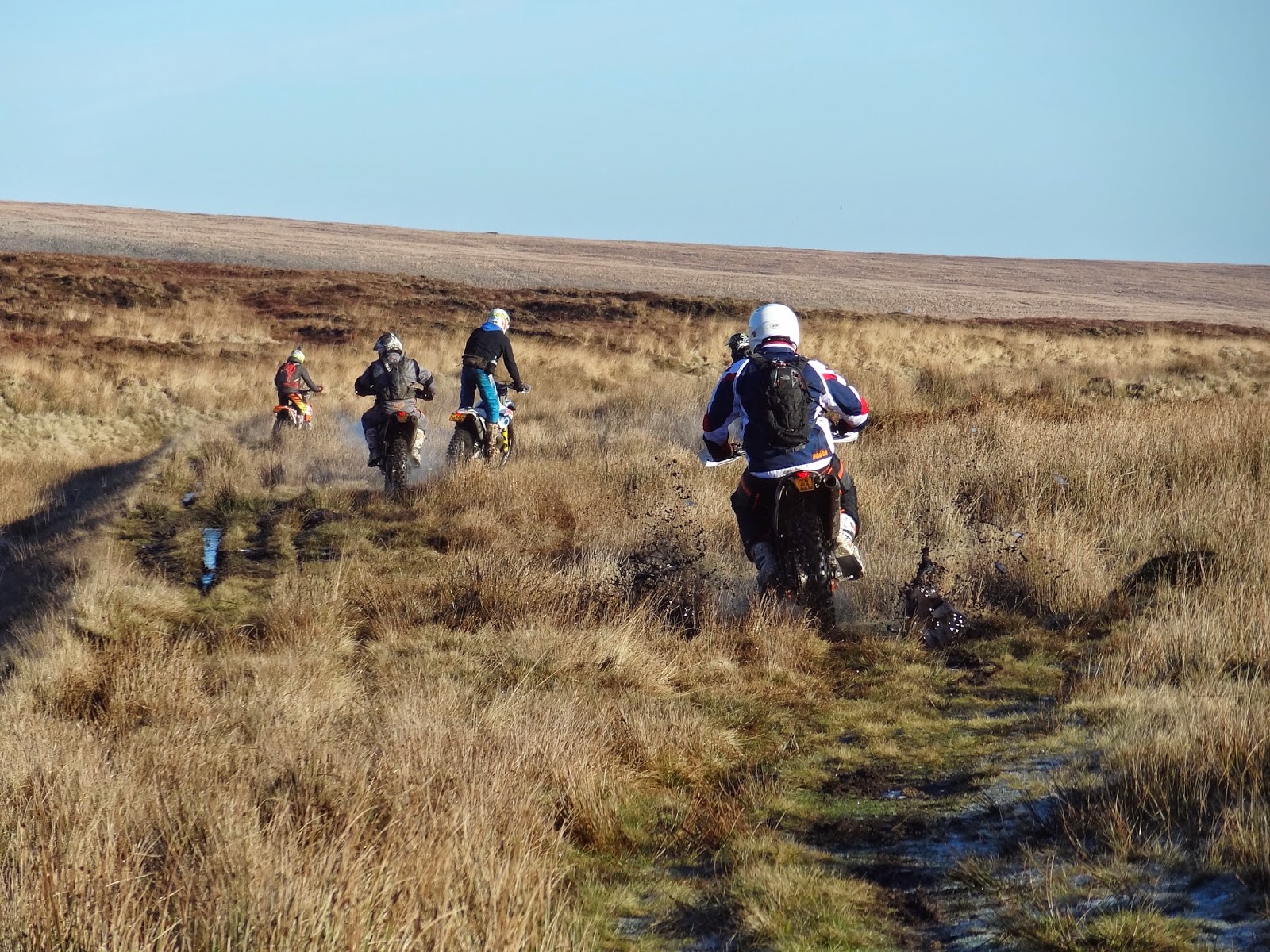 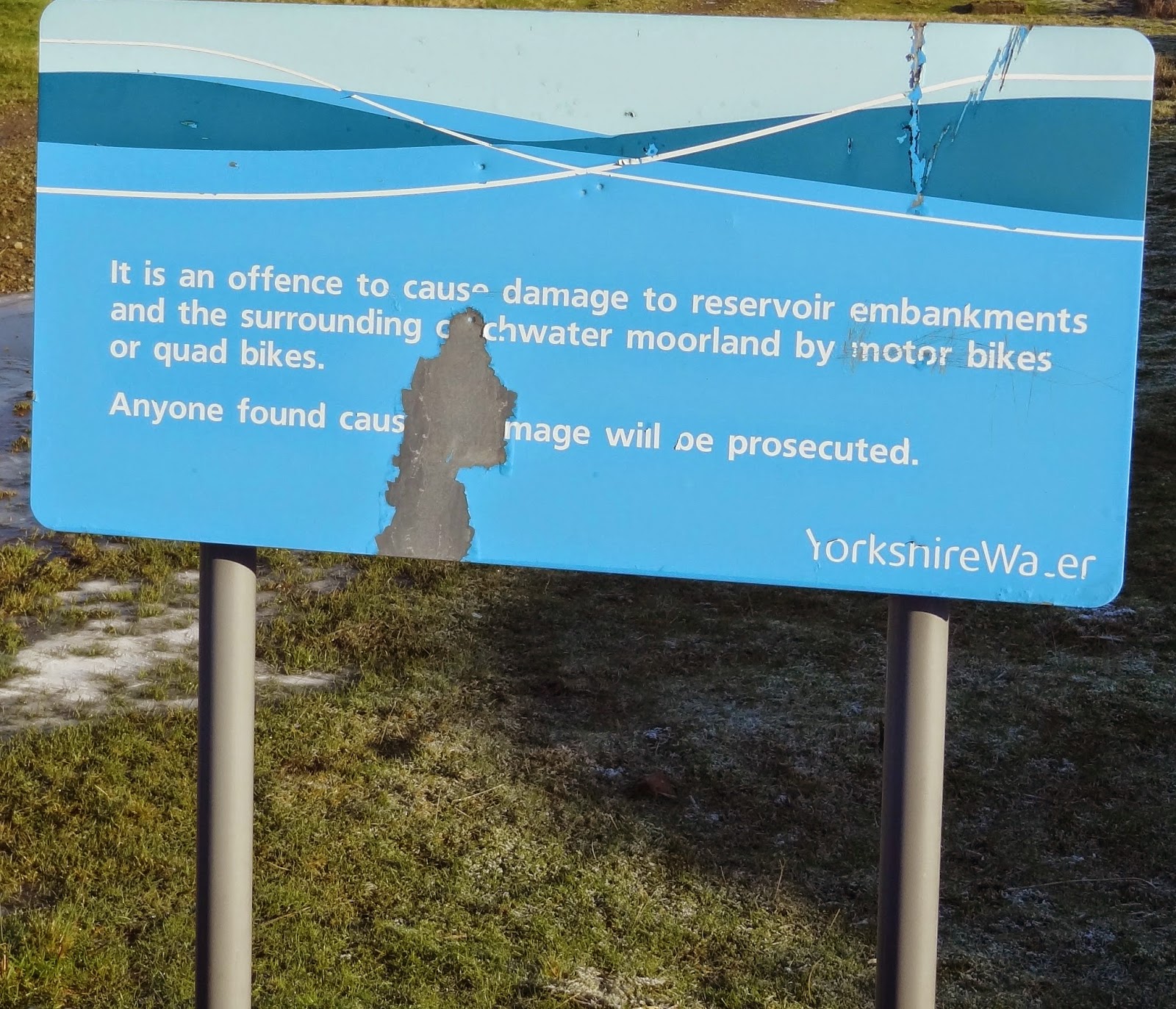 Approaching midday it was glorious. Any ground other than north facing had started to melt. Green Withins looked wonderful with the blue sky reflecting on the water. We stood and watched the motor bikes climb straight up the hillside beyond the reservoir and saw the deep black scars they left in doing so. 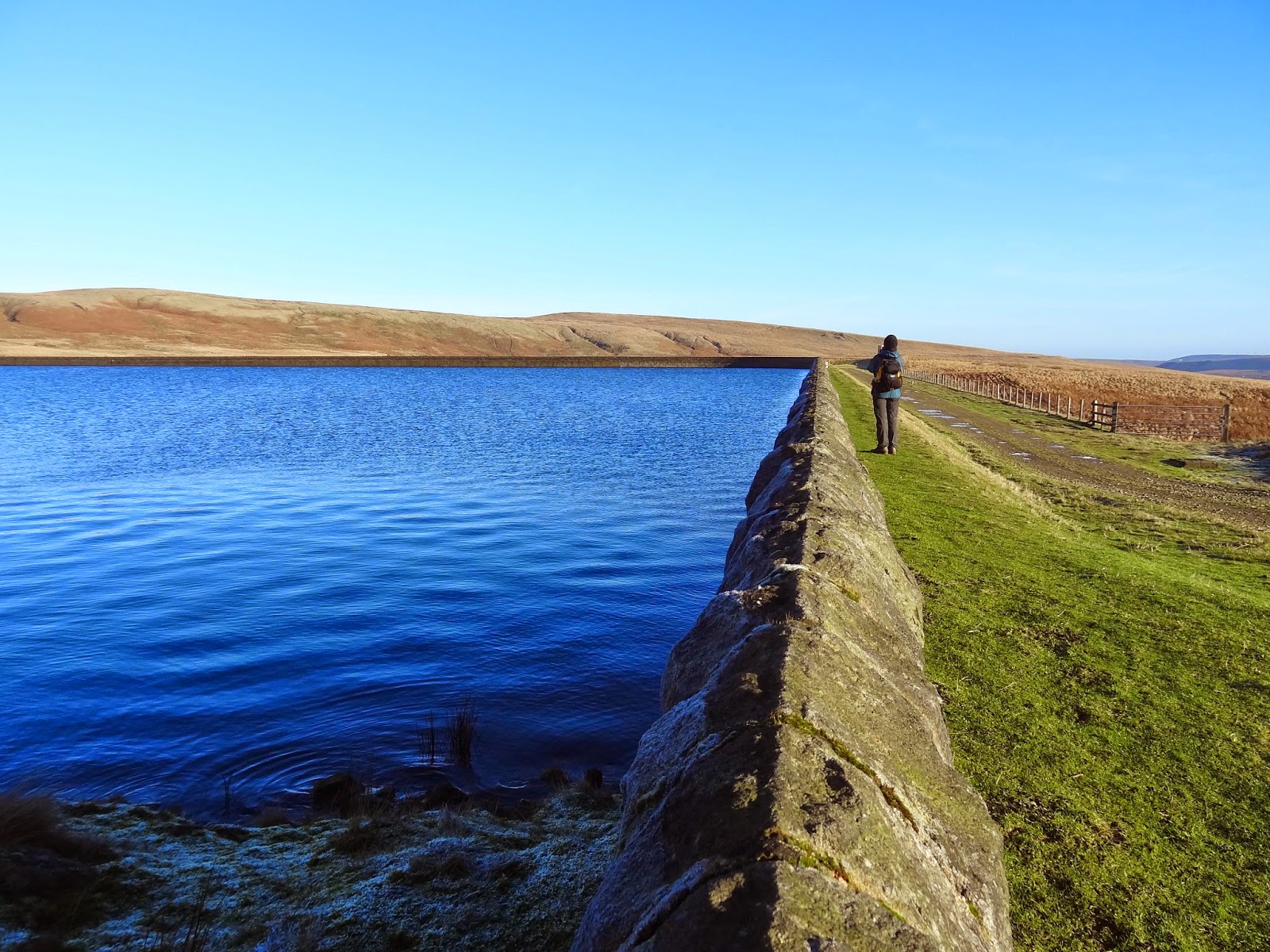 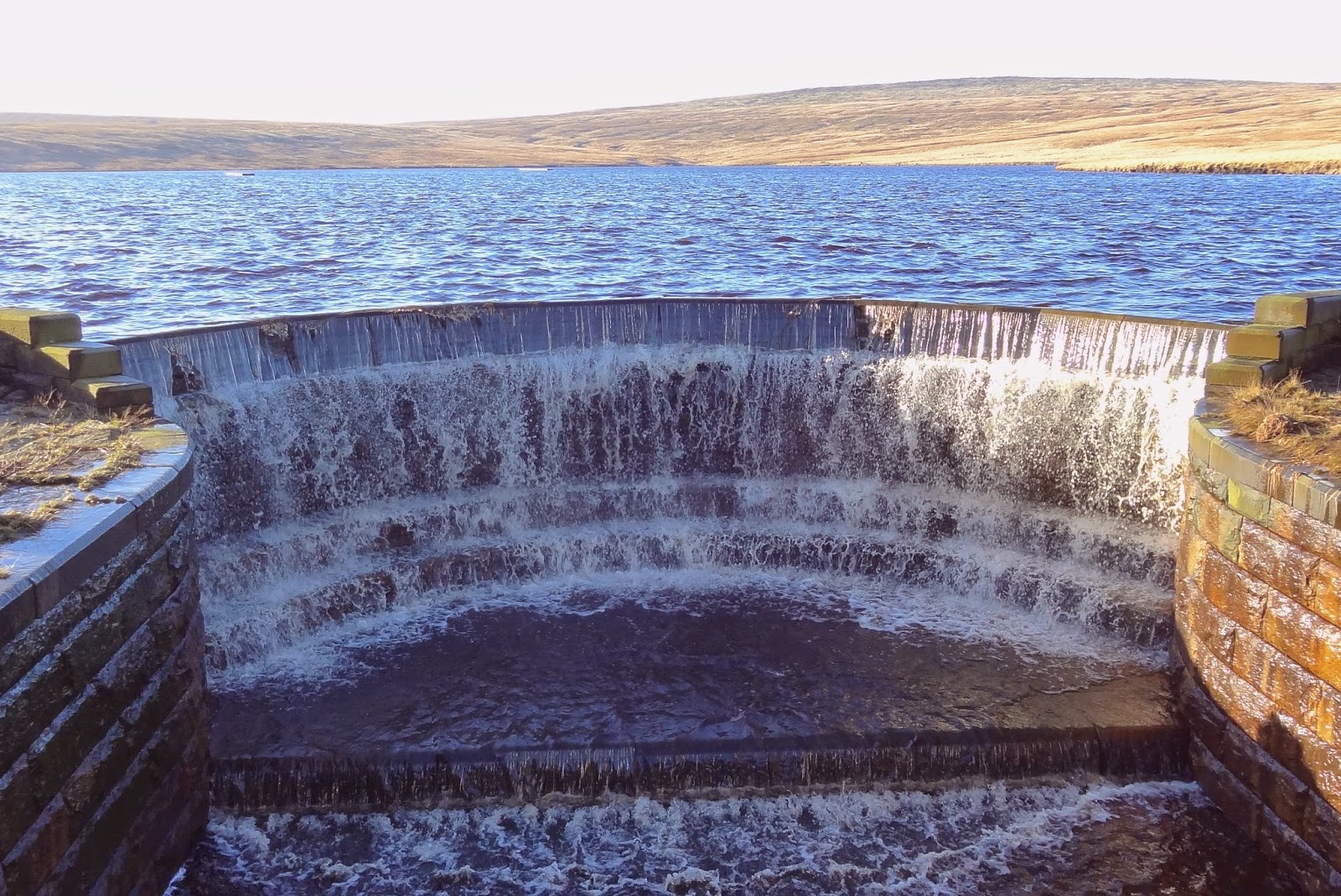 Reservoir overflow
We spotted quite a few nice wild camp sites in this area and made a mental note.

Leaving the reservoir at the North end we followed the drain east for a couple of hundred yards to a footbridge. In a sunny spot we stopped for lunch. Beneath the footbridge were stalagmites and stalactites. I did take a photo but it wasn’t good enough to post.
Whilst having lunch i checked my Satmap Active 10 GPS to see what the stats were so far. Guess what! It had recorded the first 970 metres of the walk and then nothing. The batteries were full and the button lock was on so why it decided to just stop is beyond me. Once again the Accolade for the Naffest GPS goes to Satmap.

Our onward route was NE skirting below Flint Hill. We met a couple of older chaps who were ankle deep in bog and they commented “So there is a path then”.
Just where the path joins Rishworth Drain we noticed the hill fog moving swiftly over Blackstone Edge. Fortunately it wasn't a thick blanket and soon dispersed as it reached our position. 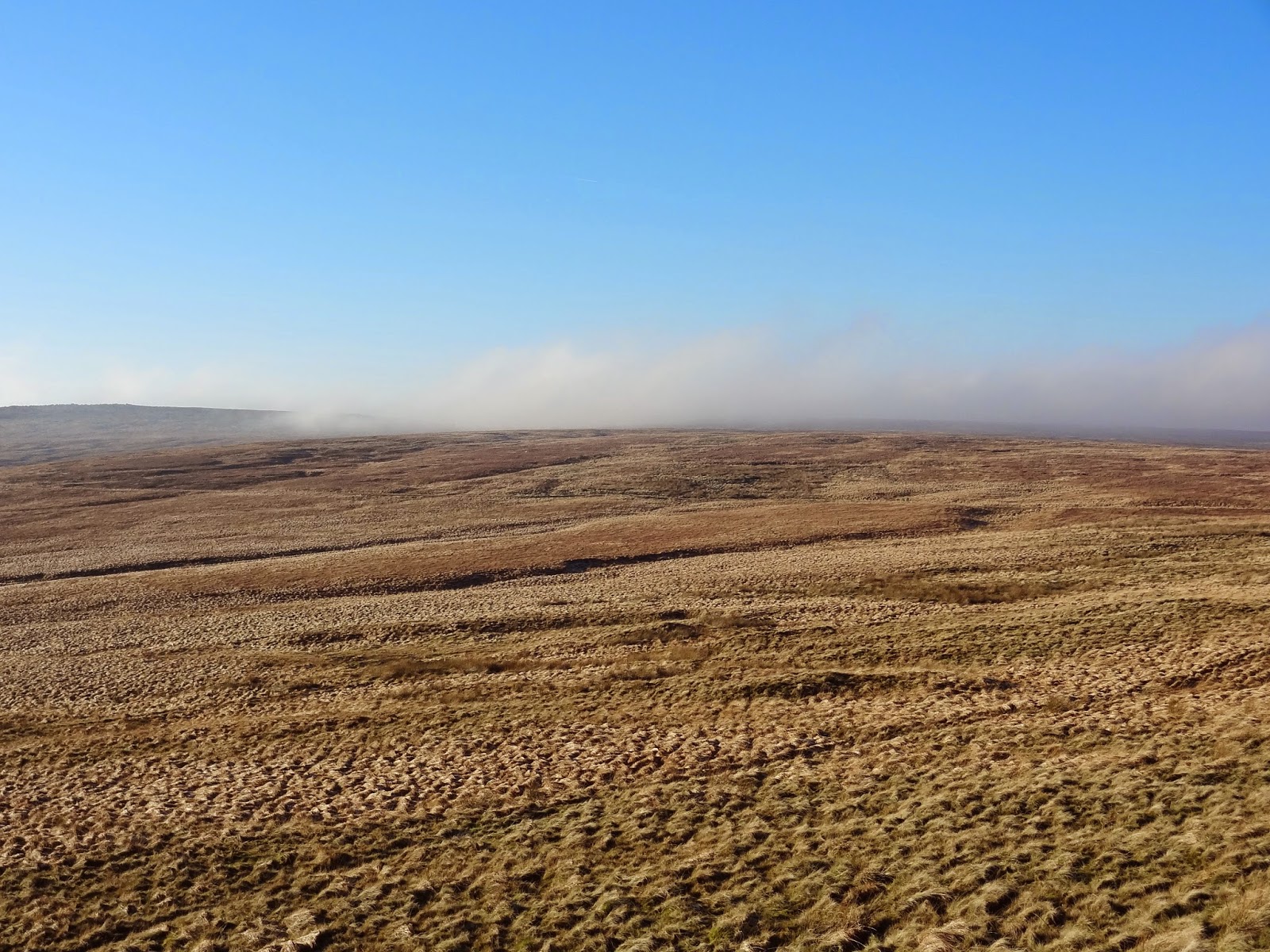 We crossed the pack horse route which we left at previously at the Aiggin stone and followed the ditch round until we came to the A58. From here we had about 1/2 mile back to the car park which was now so busy. There must have been 100 cars parked everywhere. 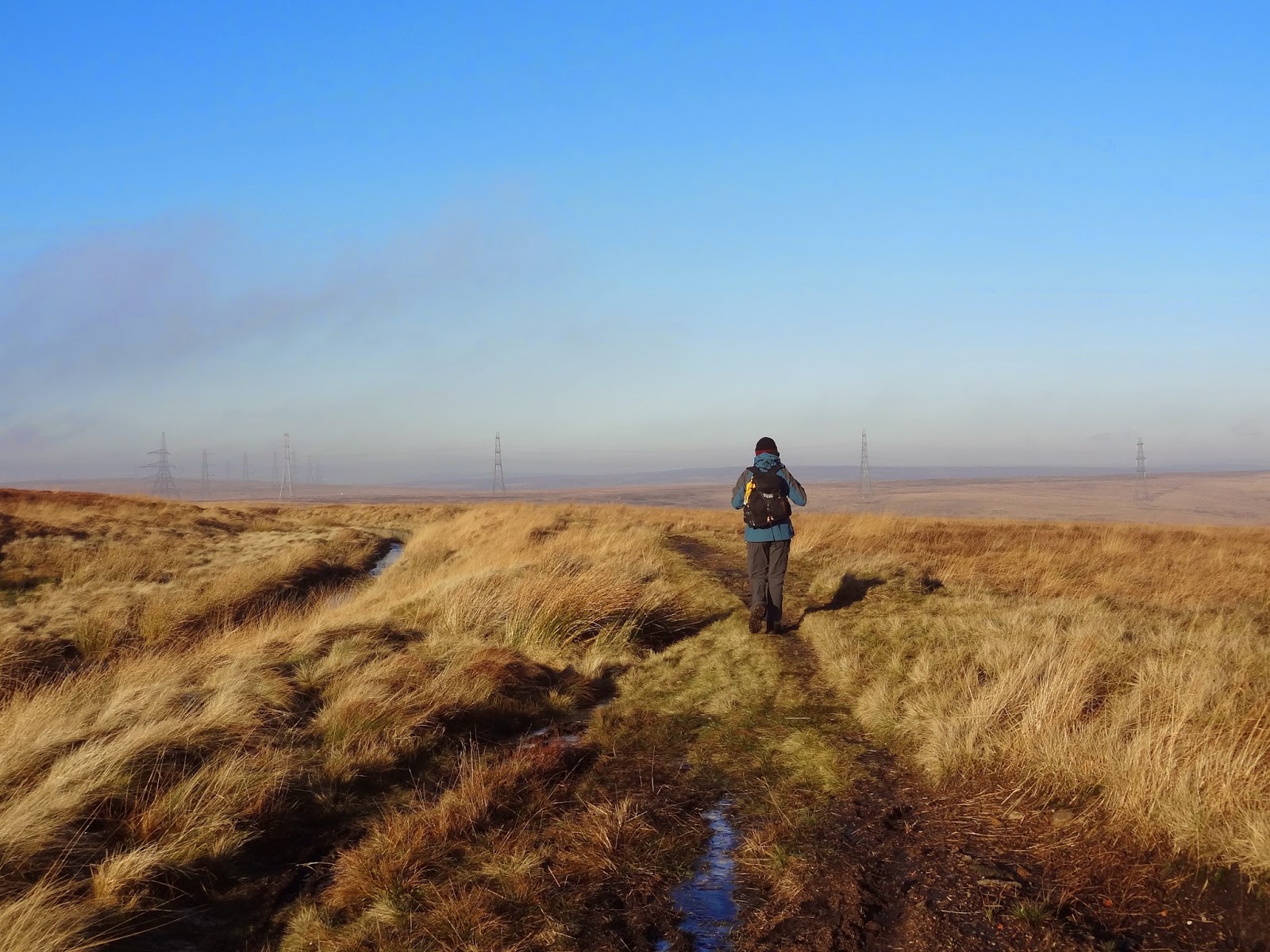 Following Rishworth drain heading for the A58 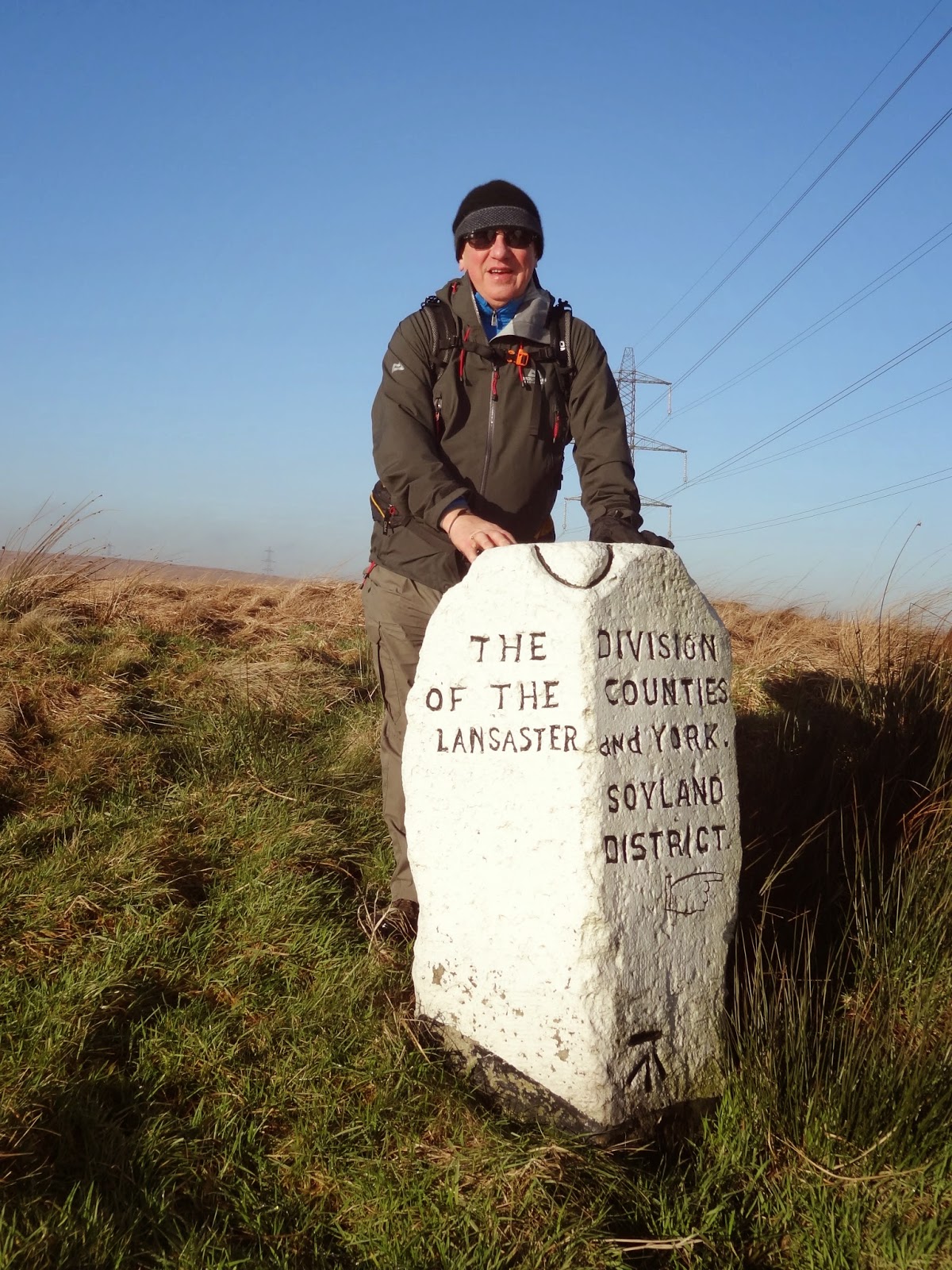 Boundary stone.
Route 10.5km and took just over 3 hours. A good walk to get the knee going again.

I had viewed that M62 footbridge many times before I walked the Pennine Way in 1987. I had vowed to myself that I would not cross it until I was actually walking the PW. I remember looking over at the endless traffic, absorbing the noise and speed in contrast to the quiet ad solitude of my walking and wondering at the madness of modern life.

When you look at the electricity pylons that adorn the surrounding areas you wonder how on earth they got through planning. I suppose people thought getting electricity was more important than the scenery. How times change. When you consider the footbridge was built specifically for the Pennine way and such a unique design it must have been quite a coup in its day.

Ah, my local playground. I live just down the road there and was up over Blackstone Edge on Saturday. You definitely got the better day, I had sleet and rain most of the time. Did about 21km over Rishworth Moor, Blackstone Edge and Moss Moor...very boggy under foot. If you get the weather it can be a grand walking area. But wander off the path and really try to use the open access, and it can be incredibly tiring going.

Hi John. I am only 20 minutes away from the White House. When/if my knee gets better we should arrange a day walk.
Yes, like i posted i was glad the land was frozen.

Hope the knee gets sorted...I know from close experience (poor P.) how frustrating bad knees can be.
I enjoyed the section of PW from the M62 to The White House a couple of years ago. Its grand wide open big sky country!
Thanks for sharing :-)

Well done Alan it sounds like you are on the mend. Nice route apart from the trial bikes.

Thanks Al. Its grand country and right on my doorstep.

Thanks Martin. I thought i was on the mend but it seems like i am back to square one today. Its very sore again. A real nuisance.

Good to see you out and about again Alan. It looks decidedly wintery. Mind, dry and cold can be fine as long as you have plenty of layers on. Take it easy on that knee. Sorry to hear it has flared up again.
It is a pity off road bikers are so hell bent on tearing up the countryside. A heavy fine would not go amiss?

Thanks Dawn. I've missed getting out. I don't mind any weather, we have gear to cope with all conditions and i particularly enjoy walking in the rain.
There is a place for off road bikes in the countryside but they need to respect where they shouldn't be.

Hi Alan. Looks a lovely walk and in stunning weather. On the SatMap issue and I'm sure you know as much as I do, but it wasn't on 'hibernate' by any chance? It doesn't record data when in this mode although it does still shows the track. Just a thought.

Sorry to hear the knee is playing up again. Have you had a diagnosis if you don't mind me asking?. I've been laid low with some bug since just after Xmas and have missed four brilliant days out so far!

Hi Gibson, Thanks for asking about the knee. No I haven't had a diagnosis. I was letting rest sort it and I felt I was winning until yesterday. The likelihood is that I will go and see a physio. The Christmas virus has plagued the whole UK I think. I felt really rough for 2 weeks and Sheila had it for about a week. Men's virus's are always harder to shift. Ha.
Re satmap, no it wasn't on hibernate. I checked that the night before when I recharged the battery. I am going to use it again in a few days just walking around the houses and if it stops again I am going to send it back for a complete service. It still doesn't work with my Mac BTW.

Well Gibson i have to eat my words. Power setting was on shutdown after 15 minutes. I have no idea how this happened as i always have it set to Always On. I checked it the night before and it was ok. All i can think of is that i may have touched the scroll button when i put t in the case. Other than that i am at a loss.

Glad you found the cause Alan. Let's hope you did touch the scroll button and it hasn't developed a mind of it's own and become self-aware!

I'm a bit late to the party here - but from those photos it looks like that was a cracking day to do that walk. Lovely!

Most enjoyable and much needed walk. Thanks Gayle,