This walk was planned a few weeks ago so we were very lucky that the day turned out to be a fine dry sunny day. Considering the torrential rain of the previous few day we were extremely fortunate.
Terry and i bussed into Manchester to meet Pete, a keen amateur photographer, in Victoria Railway Station where with a few minutes to spare snatched a quick but large coffee from Starbucks.

The station is undergoing a massive re-generation and they are making a fine job of it, modernising but keeping a mix of the old and new.
One thing that puzzled me was the new ticket gates. Very similar to the London Underground. You put the ticket in, the gate opens and you pass through. So why was there only 3 gates open with a green light and about 10 closed with red lights. For each green gate there was a member of staff making sure all was ok. I watched for a few seconds and thought if they have the same amount of staff on as gates open why do they need electronic gates?

We alighted the train, which was on time, in Marsden. 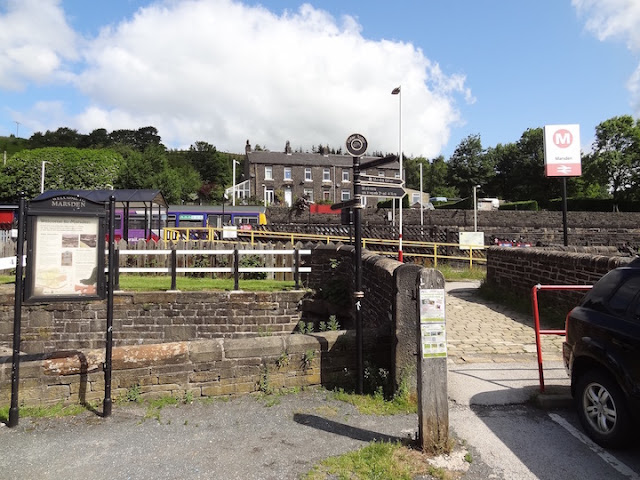 At this point Pete was busy doing photography things and we had to mention that we had 7 miles to go and needed to make a start. 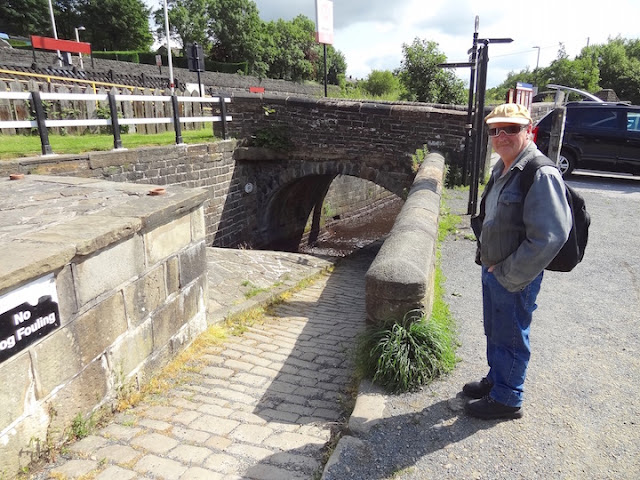 Terry waiting for Pete and posing as Shades Guevara.
The Huddersfield narrow canal runs between Ashton under lyne and Huddersfield and took 17 years to build. It was opened in 1811. Our journey covers only 7 of the 20 miles.
The narrow canal is just that, very narrow with a width of only 7ft 2” at some points. In fact it looks narrower than that, but it cannot be. 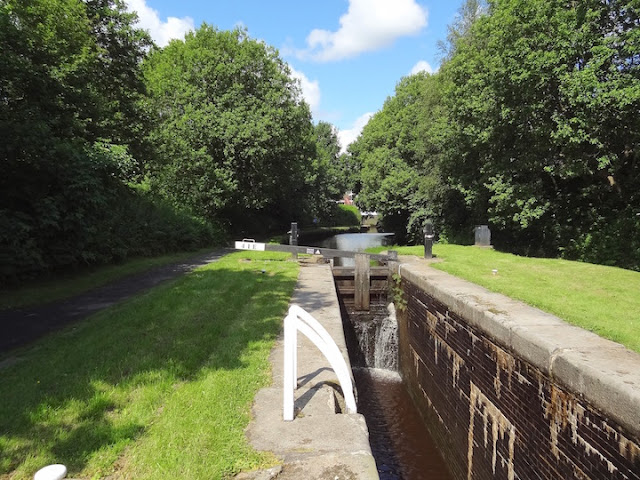 Huddersfield Narrow canal lock 41E
It wasn’t a great day for photographs as the sun was strong and the shadows too but it was ideal for walking or in our case, ambling. I’ve walked many a canal in the past but i have to say that this section of canal is wonderful. The whole 7 miles passes through stunning scenery and it was such a pleasant change to walk along what is basically   industrial heritage without litter, dog poop, graffiti and dereliction.

We were heading down hill at a fair rate and the high number of locks, The Marsden Flight as its called must be hard work for the narrow boat crews. Not many boats were seen along the route, three in total.
Soon we passed between two reservoirs. On our left was Sparth reservoir which is a water storage reservoir for the canal itself and on the right the old mill pond of Cellars Clough Mill. 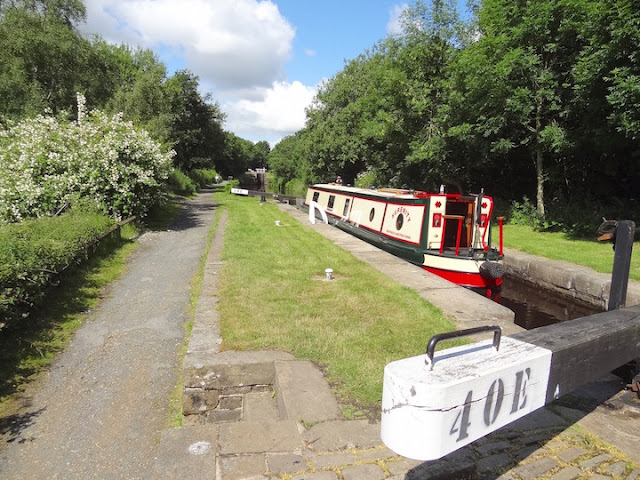 The narrow boats name says it all. (Pete in the background playing catch up). 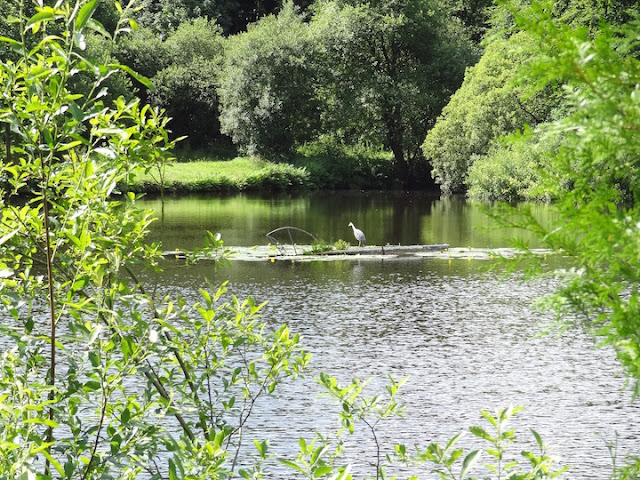 Heron fishing on Cellar Clough Mill pond. Stood on what looks like the prow of a ship.
(Are all Heron’s Male? Well you never see a Sheron) Sorry. 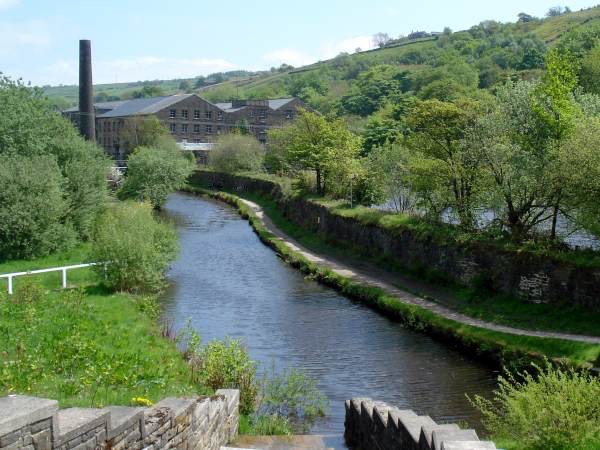 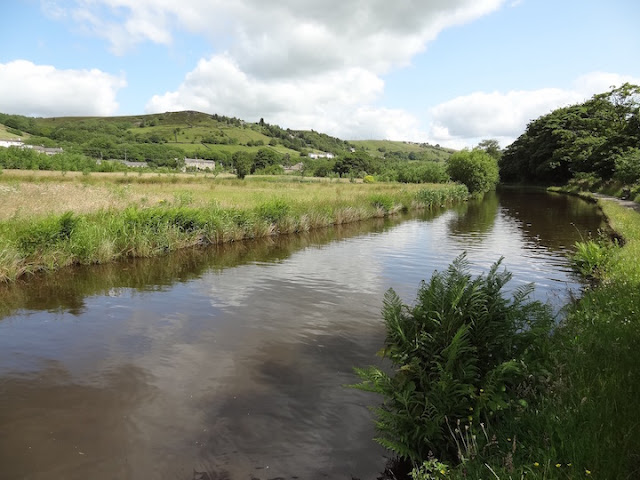 Looking East from near Sandhill. 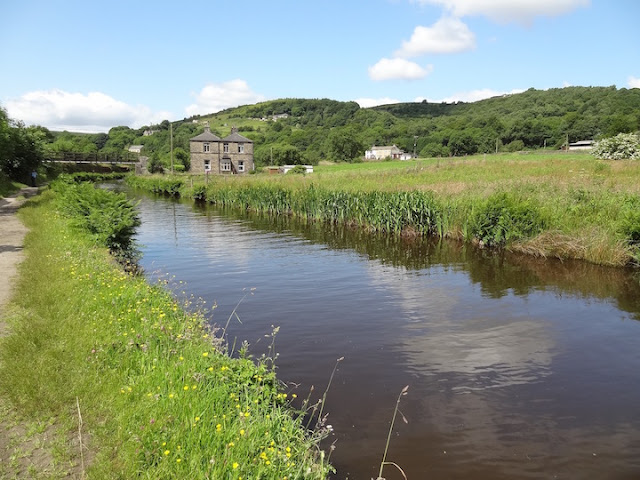 Looking west from near Sandhill.
The canal at the above section is quite wide, more like a river in fact and Terry informed me that it was to ensure the canal locks had enough water with the drop being so great. (He knows about canals you see)

Very pleasant walking brought us to Rotcher Lane near Slaithwaite, pronounced Slough-it. Here there is a Guillotine lock. This is a mechanical lock and has to be hand wound. The lock was installed due to the change that had to be made with the widening of Upper Mill Bridge. 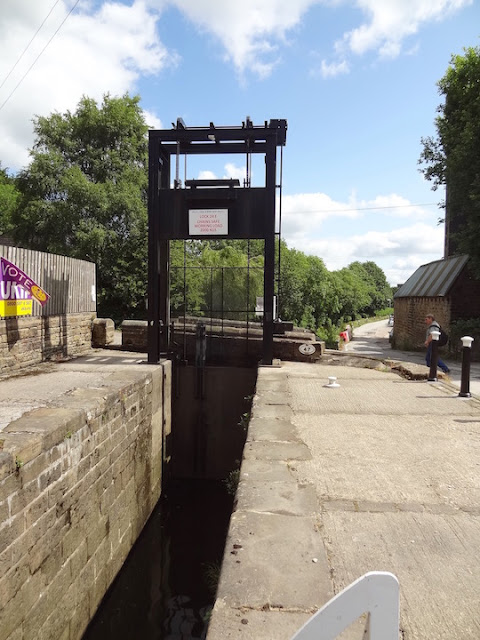 Guillotine Lock
While we investigated the lock and waited for Pete to catch up. Did i mention he likes to take photo’s. Lots of photo’s.
There was a very strong hoppy aroma in the air. Not dissimilar to a brewery in fact. Just around the corner from the lock we came to the Empire Brewery. Terry asked if i wanted a pint, at which i thought he was joking, only to find out later that the sign on the gate (just above his head) was advertising bottled beers for sale to the public. I completely missed it. The Upper Mill complex next door is another superb building containing a working spinning company and a bakery/cafe. 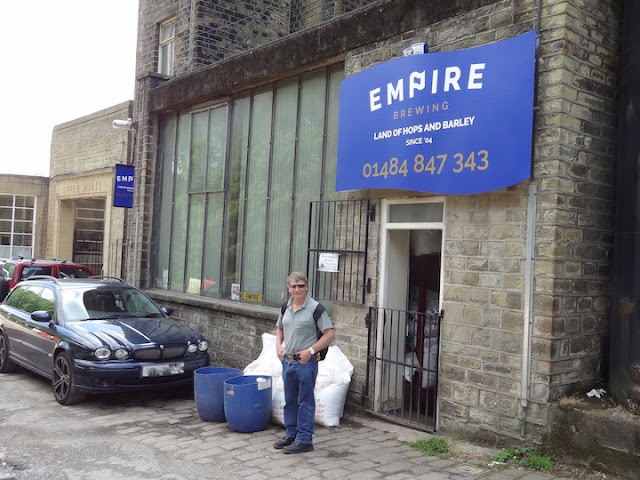 Peter had now caught us up but it didn’t take too long before the gap widened again. Fortunately Slaithwaite was only a short distance away where we stopped to admire the funeral directors that was used in the TV program Last of the summer wine.
Slaithwaite is a pleasant village and i expect it can be a bit busy with tourists on a weekend. Today it was quiet and a pleasure to walk through. 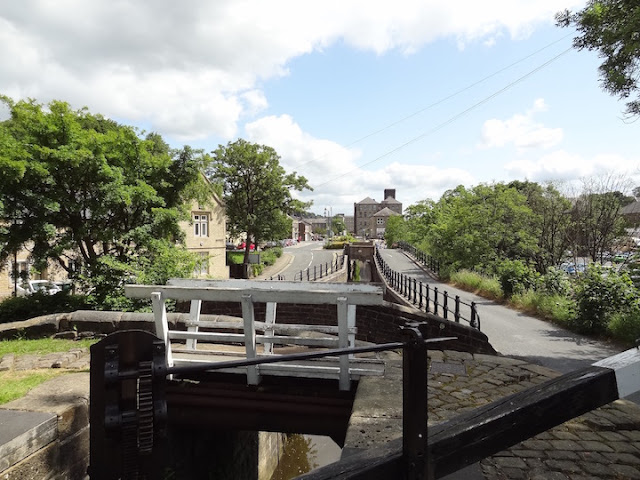 Approaching the village of Slaithwaite. Funeral directors on the left.
The majority of villages in the Colne valley have grown around the cotton industry and Slaithwaite is no different. Just on the east side of the village we passed the SPA mill. 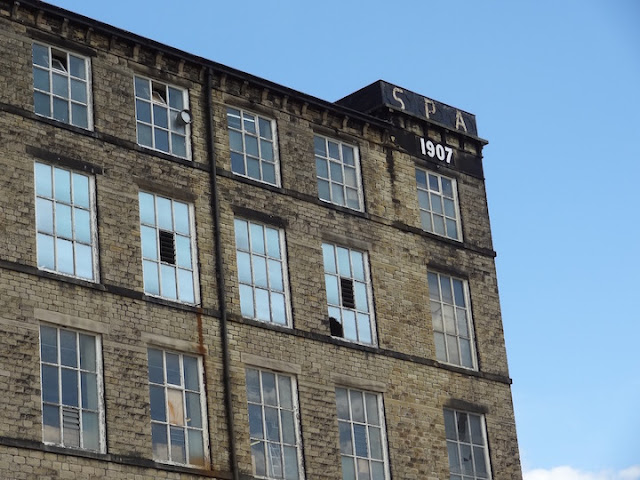 Established as steam-powered woollen spinning mill in 1860s, single-storeyed weaving sheds added by 1887. Acquired in 1902 by Slaithwaite Spinning Company which had built three cotton-spinning mills in vicinity, and which in 1906-7 built large five-storeyed fireproof cotton-spinning mill on site, modelled on contemporary Lancashire designs. Low card room along one side; five-storeyed service block at one corner. Existing sheds enlarged and largely rebuilt for winding cotton.
The mill is called Spa Mill due to its location adjacent to a spring thought to have medicinal properties. Mineral baths were built in 1825. Industrial growth however forced the closure of the baths and gardens in 1938. The spring still flows from a concrete cap in the middle of the River Colne and was tested by the Environment Agency in 1998.

Walking out of Slaithwaite towards Linthwaite the canal passes through woodland. Many birds were seen and heard including a Kingfisher, Chiffchaff and i think i spotted a Willow Warbler. 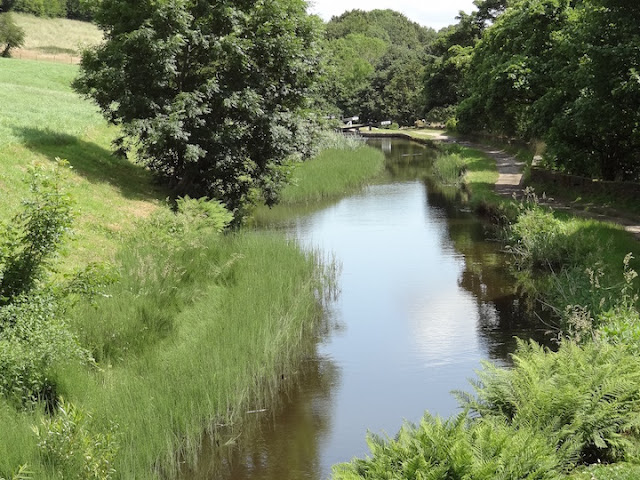 Huddersfield Narrow canal looking east towards Linthwaite.
Linthwaite stands high on the hill, its church steeple and mill chimney in view way before you get there. 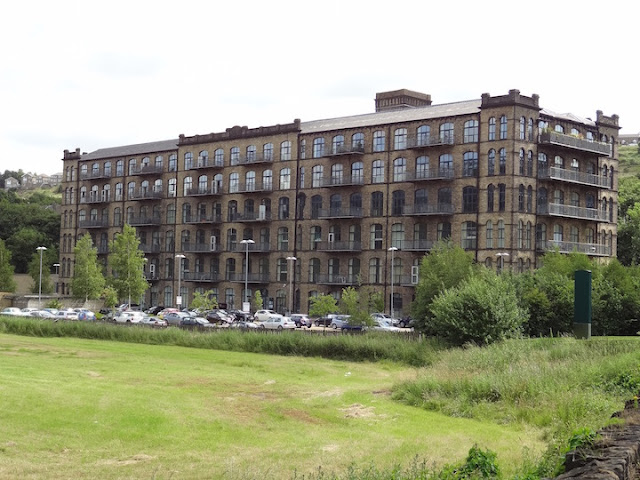 One of the old mills has been re-develloped into living accommodation. Known locally as Titanic Mill.
Titanic Mill. Linthwaite. (Lowestwood Mill is the correct name)Circa 1911. Massive woollen mill. Hammer dressed stone. Triple, hipped slate roof. 6 storeys. 26 bays by 6 bays of industry casements. Corner bays of paned, round arched windows, break forward slightly and are surmounted by parapet. Other casements have shallow segmental head. On north west elevation, central 7 bays break forward slightly and are surmounted by ashlar parapet with dies. Near central square stair tower on south east side, which rises above eaves level and has triple round arched windows and is surmounted by bracketed cornice and parapet. The mill is called Titanic because it was built the same year as the ship. 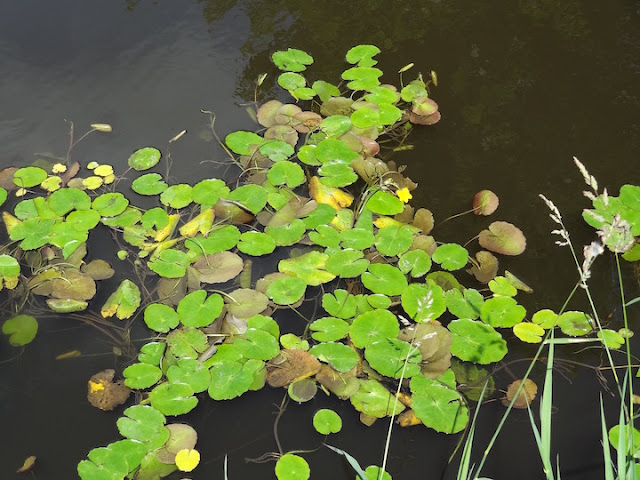 Water lilies
Many more interesting locks and bridges were passed as we approached Milnsbridge. What looks like a new build of apartments has been sympathetically constructed. The stone not looking out of place in the surroundings. 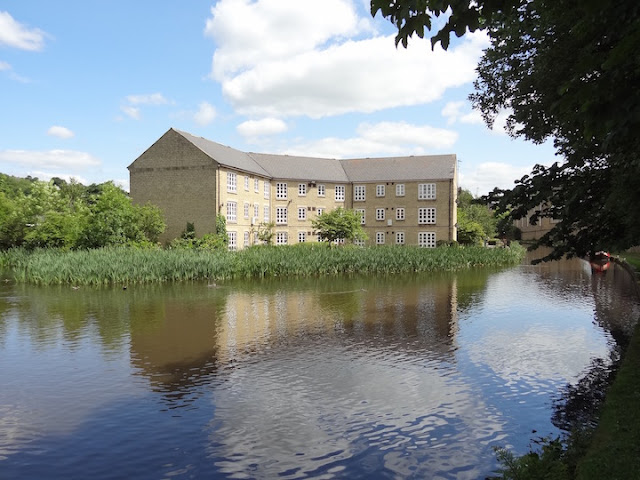 Milnsbridge canal side living.
We were getting a bit peckish at this point but we still had a bit to go before Huddersfield. We planned to have lunch in the Head of Steam pub but we hoped that we were not too late for food.
We passed Britannia Mill built 1861 and numerous other closed premises before rounding a large bend and going under the grand Longroyd railway Aqueduct. Below us was the River Colne and above us the Railway. 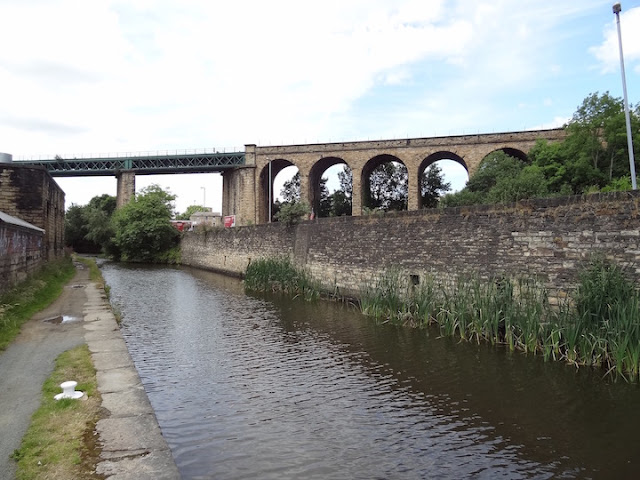 We new that Huddersfield was close as litter was appearing and a few bits of Graffiti was seen on walls. The church spire on the A62 road was only a few yards away. We wondered if the towpath carried on into the centre of huddersfield as it used to be a long tunnel without a path, it  did.
Much new work is undergoing along the canals northern bank, waterfront homes and more and the new Kirklees College building is quite impressive. To our left was the River Colne weir.
At the junction of the main road, the A616 we left the canal and headed up hill passed the second brewery of the day. Ossett Brewery, a family owned independent brewery opened in 1997.
The centre of Huddersfield was really busy with all the coffee shops and eateries doing well by the looks of things. 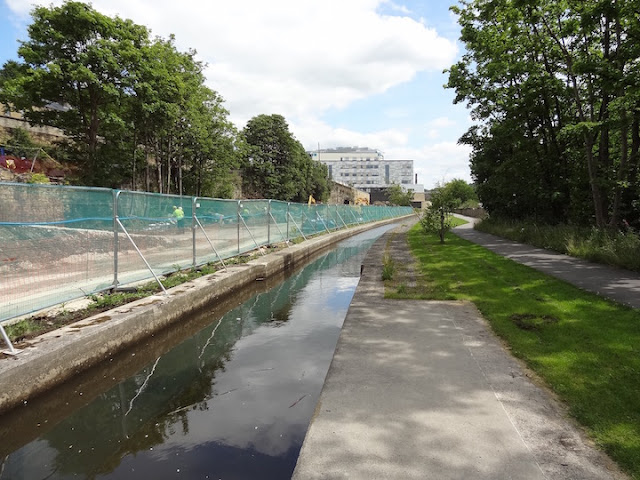 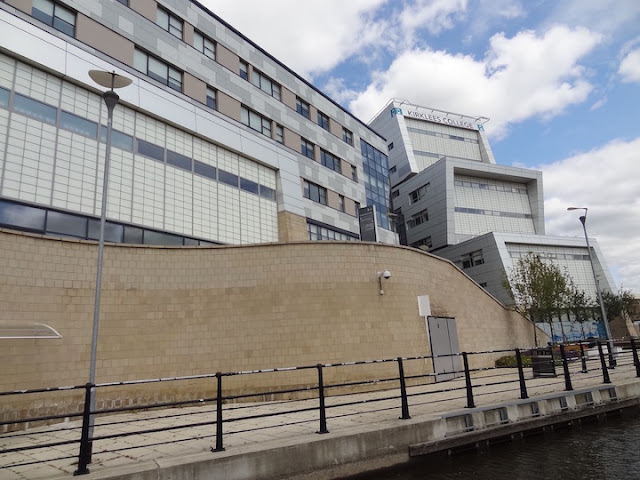 Kirklees College.
Our destination, The Head of Steam Pub was across town and next to the Railway Station. Huddersfield has some wonderful buildings and worth a visit. The George Hotel is next to the station in a modern st. Georges square, looked over by a statue of Harold Wilson PM. Behind him is the magnificent station building built between 1846 and 1850.
The Head of Steam was and is well worth a visit, the beer being very dangerous. Care and will power required. Lunch was had, the staff excellent and cheerful and all too soon the time came for us to get the train back to Manchester.
It was a very good walk and i am sure there will be a repeat soon. 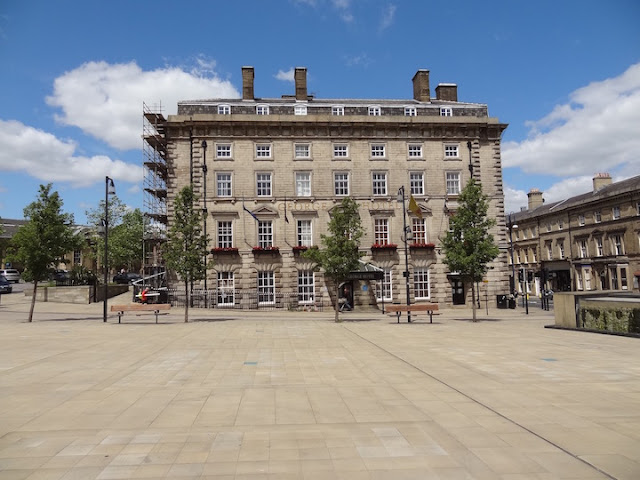 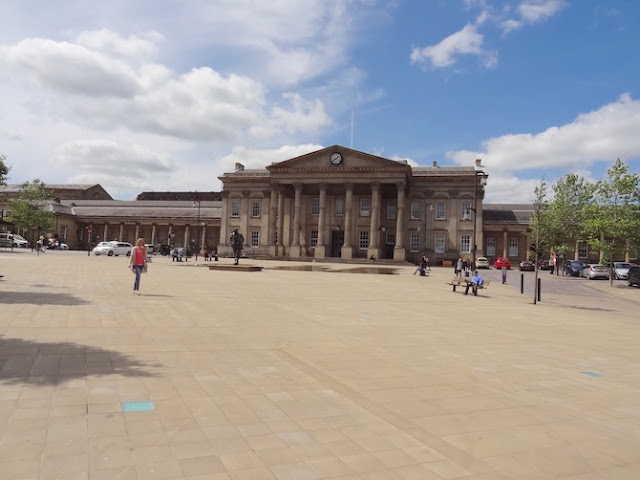 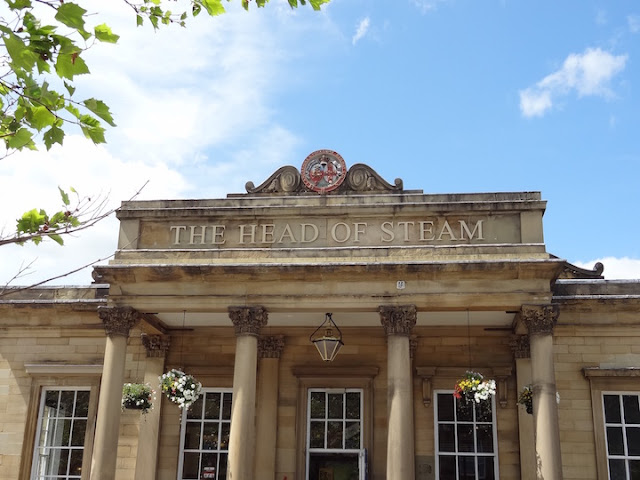 The Head Of Steam pub. (Back door leads directly onto Platform 1) 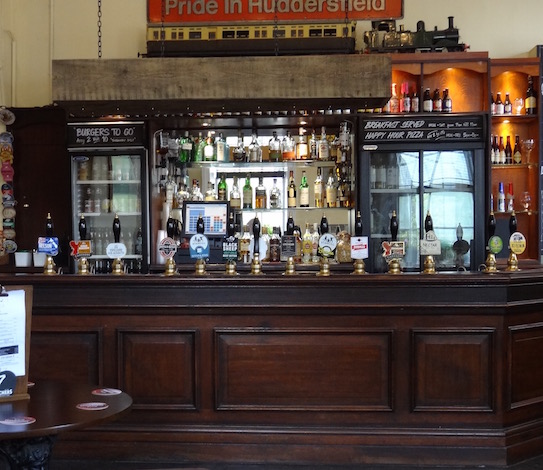 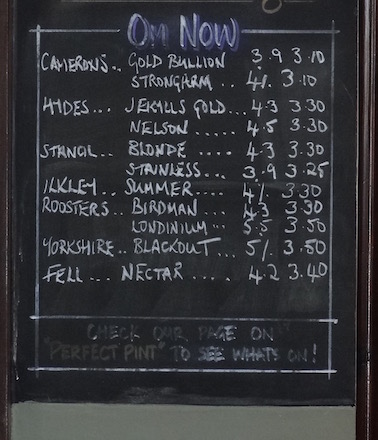 Thanks Terry and Pete for the company.  No i didn’t try the Blackout… This time.

What a lovely walk Alan, cracking photos too.

One of the most pleasant canal walks i have done. So now i need to start in Huddersfield and follow the wide canal for a bit and then the Calder navigation. I will then have completed a Manchester - Huddersfield circle.

We said we should go back, stay over and do a crawl in one pub. Smashing pub with lots of memorabilia from closed railways and Royal Navy. Great staff too.

Thanks Gibson. They say the old ones are the best.