A pleasant weekend in Huddersfield

A few weeks ago myself and 2 friends walked the Huddersfield Narrow Canal from Marsden, called in at a VG watering hole called the Head of Steam in Huddersfield before catching the train back to Manchester.
On our brief visit to the town i was impressed by the buildings and enthused to Sheila that we should go back, do the walk again and stay overnight so that we could explore Huddersfield a bit more.

So this weekend we did, but we stayed 2 nights, Friday and Saturday.

Huddersfield is surrounded by a ring road and it’s quite easy to split the town into two sections for the 2 days. It also seems to be that the main Victorian architecture is in the North and the newer buildings in the South. The buildings are quite spectacular.
There was a party atmosphere in full swing as we came out of the railway station with lots of stalls, a film on a large screen and a band preparing to play. We took a bit of time to have a look round before finding our hotel.
The entertainment was all free and the seating too. Manchester take note. 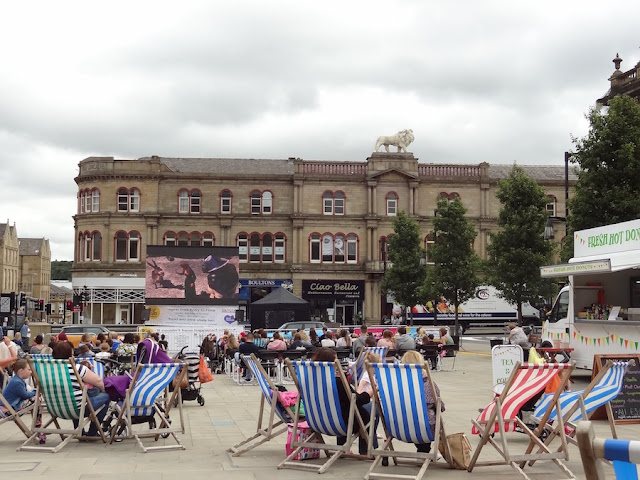 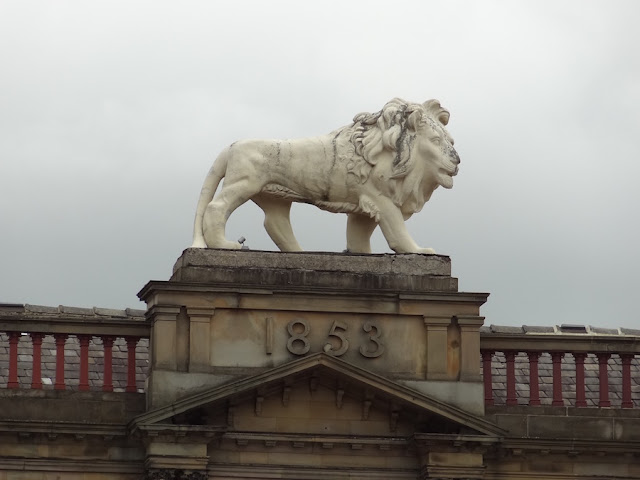 Lion Arcade.
What was immediately noticeable was how clean Huddersfield is. We looked around and we couldn’t see any litter, anywhere. For a town we were impressed.
Huddersfield has quite a diverse population and this is all very clear as the different restaurants portray. What ever food is your favourite you can find it here.
Our hotel was only 1Km from the station and so headed off to check in.
The evening was spent trying out the local hostelries. Obviously we didn’t try them all but we gave it a good shot and we got our favourite.

Here is what we did.
The Head of Steam. Fine large pub with many cask beers and part of the station complex. Lots of railway memorabilia and does pub grub. Sheila decided that she would give the cask beers a go which is quite unusual for her.
The Kings Head. Again part of the station complex, once the railway ticket office. Just one big room with a magnificent tiled floor. Many cask beers and mainly from small breweries. This became our favourite pub. They do music on certain nights and the pub sign is of Jimmy Hendrix. 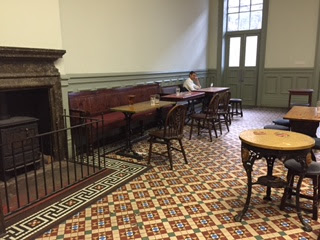 The floor of the Kings Head. 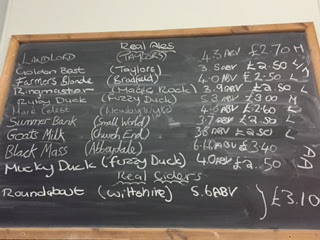 The cask beers at the Kings Head
The Sportsman. A small multi roomed traditional pub with a good selection of 8 cask beers again from micro breweries. Does pub grub and it looked very nice. Seems to be an after work hostelry. Brews it’s own beer too.

The Crown Hotel. A traditional locals pub with live sport showing. A few cask ales. Does food. Friendly place. No longer a hotel.
The Vulcan. A small locals pub with Manchester’s finest Joseph Holts Two Hoots for sale along with a couple of other cask beers. They love their karaoke here and the standard was not too bad. Good DJ, good atmosphere.

All the pubs we frequented made us feel very welcome and numerous locals took the time to speak with us. There was no trouble anywhere, just good banter. Thankfully by this time we were only 1/2Km from the hotel.

Saturday saw us getting the train to Marsden for the walk along the canal. It was a glorious still, hot day. I won’t bore you with the details as the walk was the same as i posted before here.
The difference was that Sheila and I carried on a little further and walked a small section of the Huddersfield Broad Canal. Altogether around 14km. 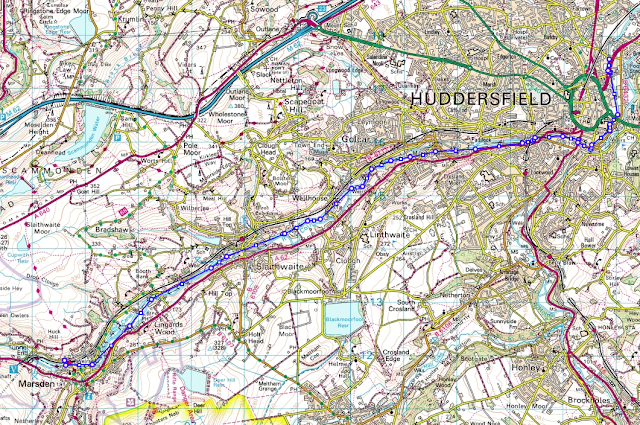 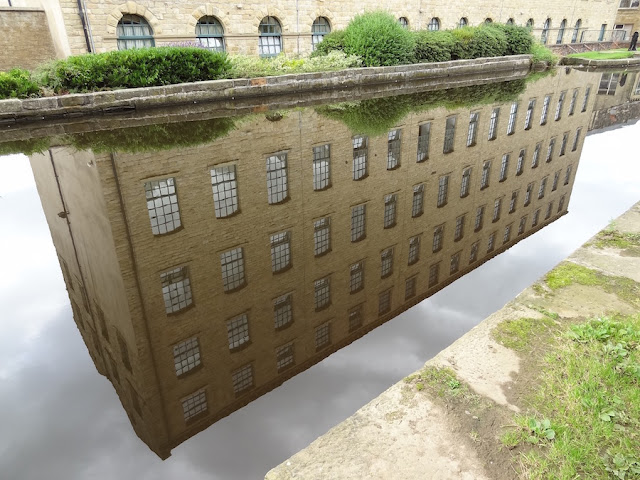 Reflections
Our Saturday evening walk to the South side was a little disappointing. We came out without a coat and no sooner had we made it into town that the heavens opened.
We called into the Wellington but there was no cask beers. We dashed to the Royal Swan but it was closed down.
We did a quick dash back to the Head of Steam where we just made it as it started to pour. Thunder and lightening and very black clouds. Lots of folk had taken shelter and it became quite hard to get served. We left and went to the Kings Head where because of the torrential rain we stayed put and did a pub crawl from the beers board. They had Red Mcgregor from Orkney on offer and it was selling very well. The landlady told me that it was the first time they had it on sale but it definitely won’t be the last. 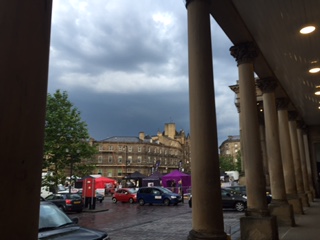 Again we had a really friendly time. A most enjoyable couple of nights. We must return again to do the south side of town. (Booked for November.)

So, not everything went well. Sunday we got on the train home and by mistake we got on the Liverpool train. Which was calling into Manchester, but Man City were playing Everton away and the train was packed. It stopped at Stalybridge and loads more got on. It was ridiculous. We had to stand up the whole way and then at Manchester loads more got on. At what point do the railway company say. "We provide a train with 300 seats but we’ve sold 700 tickets." Surely there has to be a limit.

Then we came into Manchester town centre and what a shock. After a weekend where we had seen, no litter, no beggers, no buskers, no so called homeless in tents, no cardboard hovels, no drunken down and outs, no hawkers, no harassment and just 2 Community Police officers. Manchester is an absolute filthy disgrace and i am ashamed to call it my city. I would not advise tourists to come here.
Please go to Huddersfield and have a look, it’s very very nice.

Sounds as if you had fun Alan. Huddersfield sounds an impressive city.

We had a very chilled weekend in pleasant surroundings. Huddersfield surprised this Lancashire lad and i cannot believe it is out first visit considering its only 30 minutes away.