We were woken at 11.00pm, the wind had risen dramatically, it was dark, howling and the door of the tent was taking a battering. Fortunately it wasn't raining. I wrestled with myself on whether to get out and turn the tent 90 degrees.
I decided it was better to do it now than leave it, so out into the dark we went.
Turning the tent worked and we managed to drop off to sleep quite quickly.

We woke at around 3.00am to the door flapping loudly again. The wind had changed direction. Then it changed again. The problem was that Small Water lies in a steep sided bowl and the strong wind was simply swirling around us.

We drifted in and out of sleep until 7.00am when we decided enough was enough and packed up.
It was so windy it just wasn't worth making a brew or having breakfast. We would wait until we get down to Mardale car park. 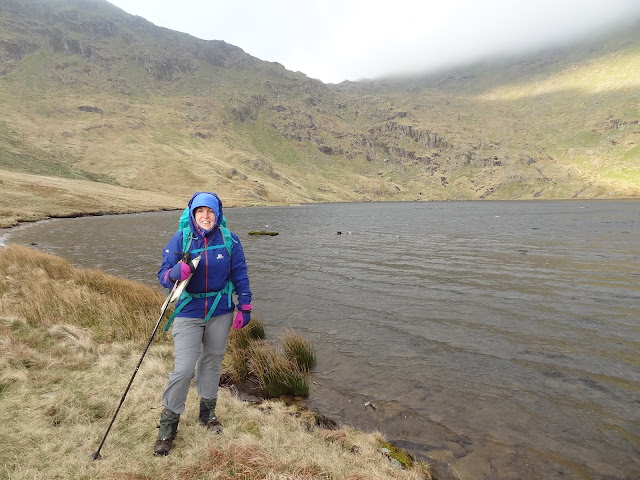 Cold at Small Water.
After such a beautiful day yesterday it was a bit of a shock how cold it was today. Waterproofs on we set off. Looking back, the tops were mist covered but there was still blue skies and a promising sun in front.
taking one last look at our pitch spot we realised how stupid we had been to pitch there. Yes it was relatively flat, yes it had a good water source but if it had rained heavily we could have been swept into the tarn or at best have a river flowing under the tent. If the tarn had risen a couple of feet as it could have done, we would have been paddling. We were very lucky.

Just at the bottom of nan Bield pass we chatted to a fellow on his way up. He was going to walk over Harter Fell and come back down via Gatescarth Pass. We mentioned how windy is was at the top and what a poor night we had had.

At Mardale car park it was busy even though it was still early. We didn't stop for a brew but carried on the walk. We supplemented our hunger with some dry fruit and nuts washed down with icy cold water.
Now we were down lower it seemed like a completely different day. Hardly any wind and quite warm.
Fifteen minutes walk along the road and our turn off along The Old Corpse Rd came into view. The sign says Swindale Head 2 miles. It may be right but it seemed like a long 2 miles.
The route is steep to start with passing a couple of old ruins before it levels out crossing between Mardale and Swindale commons. One good thing about a short steep climb is the fantastic views you get. 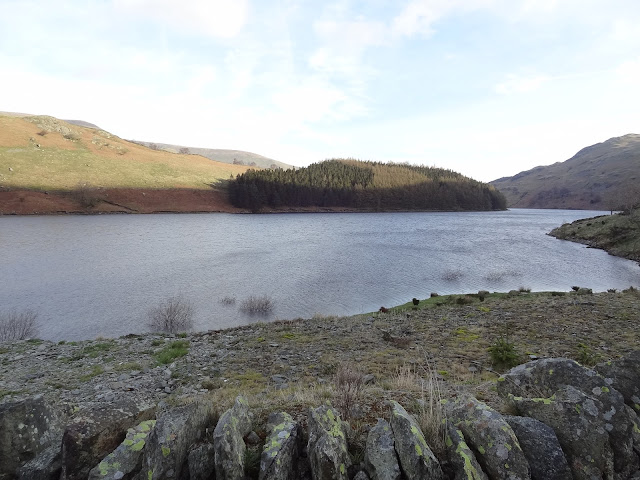 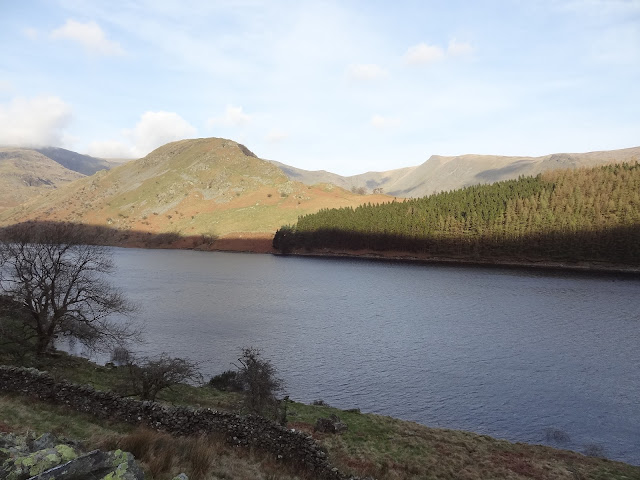 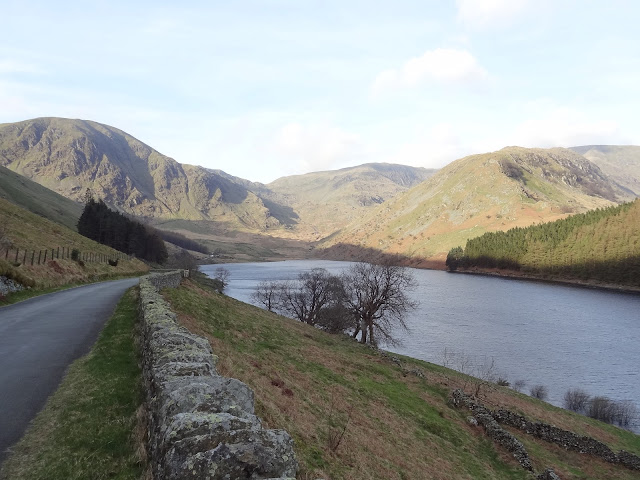 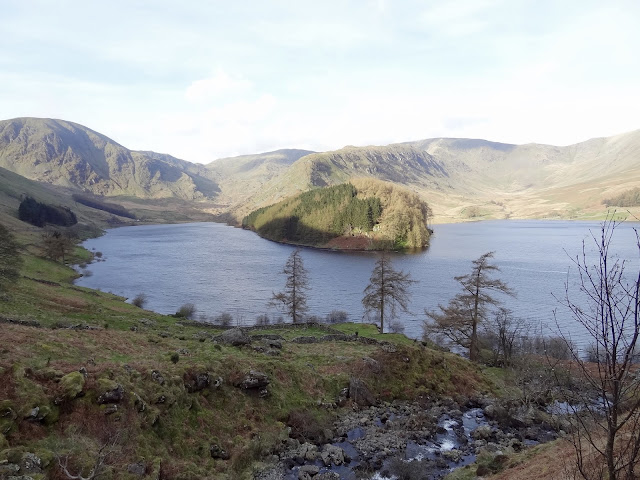 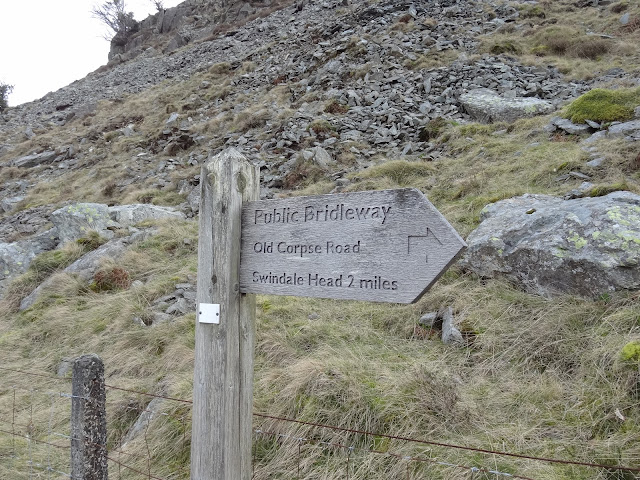 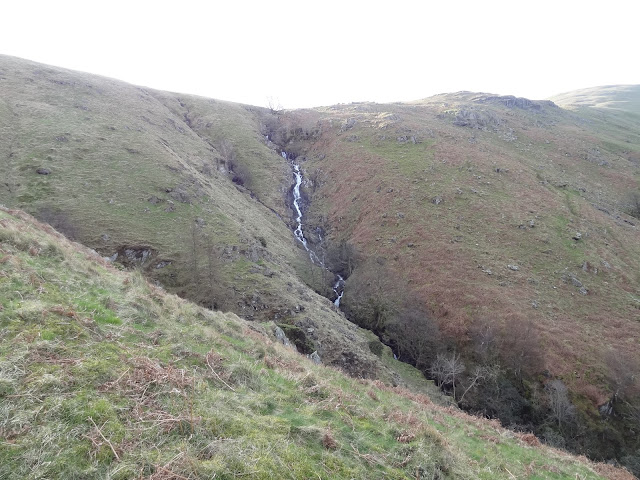 The Head of Haweswater 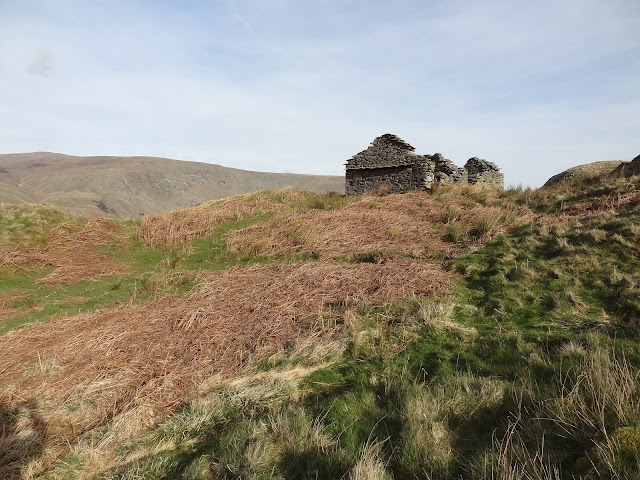 Shepherds Huts or rest stops on the Old Corpse Road. 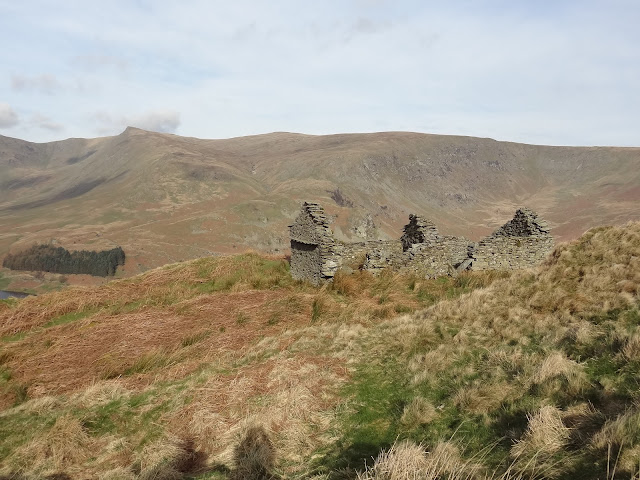 High Raise and Kidsty Pike in the Background. 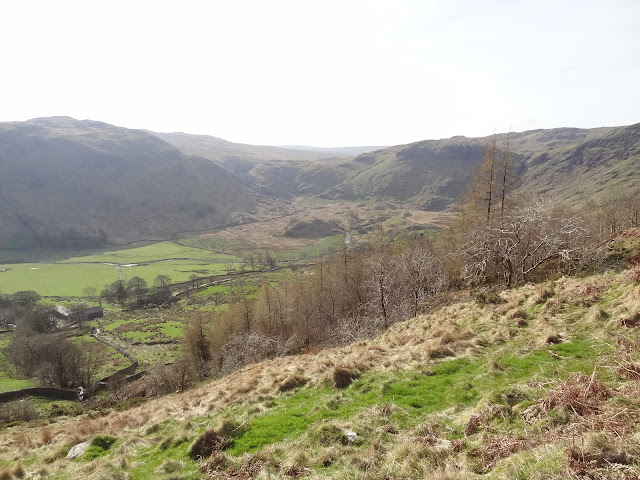 Dropping down to Swindale Head.

The last corpse to "use" the road was in 1736 when John Holme was carried from Mardale to be interred at Shap. What a fantastic last journey.

The route drops down adjacent to a tributary of Swindale Beck. It's very boggy and especially so as we approached Swindale Head Farm. The path needs a maintenance crew urgently.
Here we met the valley road, its very quiet, peaceful and a pleasure to walk. Much new work has been completed on the Beck to promote Salmon and Trout and other Flora and Fauna.
It's been a big project, worth a read here. 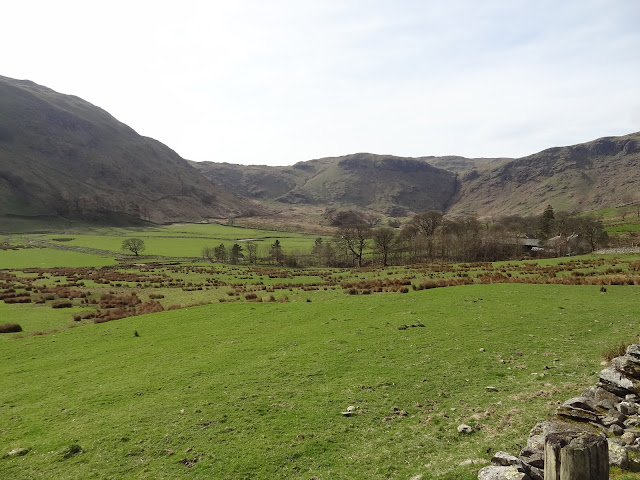 Green Swindale
So that brings an end to our 3 day leisurely backpack. Our new gear got a testing and we learnt quite a bit. Walking poles became a must have, something i cannot believe i just said. But they helped the knee a great deal. 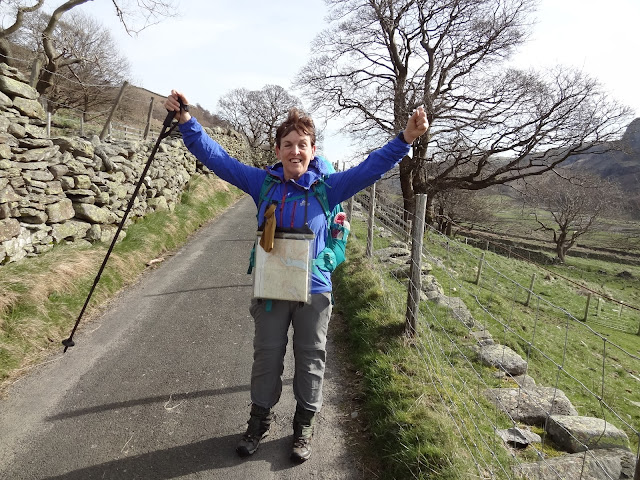 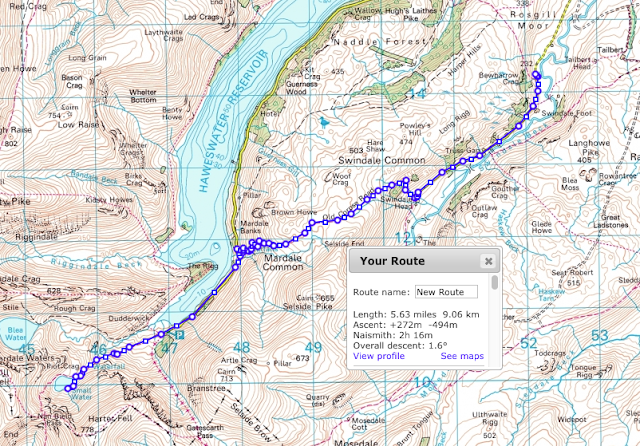 I had a similar night at Small Water a few years ago, although I was closer to the outflow. One gust completely flattened the tent, it did bounce back up thank goodness...an early experience with carbon poles!!
I've enjoyed reading about your trek, thanks for sharing.
Alistair

Thanks for reading and commenting Alistair. Our tent has Carbon poles too. They are more flexible than Ally ones but the weight difference makes up for this. I had been having some problems with the tent doors but this trip has hopefully resolved it. I made some mods back home and need to try it out again soon.

Looks a good trip all round. it is not pleasant sitting in a tent, in the dark with the wind pummeling it from all directions. Glad the knee held up. Beautiful photos too.

Thanks Dawn. The wind wasn't as bad as on Cadair Idris but it was coming from all sides. As you say, it was a good trip all in all.

Sounds like you had enough rain and wind to provide a good gear test, but not enough to make the trip miserable.

Talking of poor pitch choices, neither Mick nor I will ever forget the night spent at Kingshouse in 2008 when we woke up to find things floating around the porch of the tent, and with the river within an inch of bursting its bank, with us lying directly in its path. It was incredibly how quickly we went from in bed to fully packed away that morning!

Made us laugh Gayle. I remember being at Lagdale and waking up on a water bed with pans and stuff floating in the porch. Luckily the bath tub groundsheet kept everything inside dry.

It was a good new gear test but one outing doesn't make a review post. I will put a couple of things on though but items of clothing will need more consideration than 3 days to be subjective.

Not directly related to this post, but I saw on Conrad's blog that you might be considering switching away from Blogger. I made the switch from Blogger to Wordpress about 18 months ago and it took me about 6 months to be ready to start up again, with most of that time being taken up agonising over what to jettison and what to salvage.

I'd say the switch was far from painless and I found Wordpress to have a bit of a learning curve. Some things about WP I like - more so now I'm a bit more familiar - but it also has its issues and seems particularly determined to shut out comments from some posters for reasons I can't get to the bottom of. Overall I'd say what I've gained and lost just about cancel each other out. I have a basic free plan; I think some things become easier to do if you take on of WP's subscription plans; as it is I'm still having to use workarounds to do some things.

Hi Dave,
Thanks for sharing your experience.
I'm having lots of problems with blogger that i cannot sort out. For example. On ipad and iphone when i write a post or want to edit a post i cannot get past screen 1, it won't scroll down. this means i have to wait until i get home to change anything.
If you look at my last post the text changes from black to red, that wasn't me (except 1 line under the images). I have tried what should be a simple edit but it won't edit and i've tried numerous ways including delete and start again.
You will also see that some text is centralised, i didn't do that and again i cannot edit it to be lhs.
I have tried using a different template but it made no difference.
You will also notice on my blog that apart from 1 line of Followers the rest has disappeared. I didn't alter it. Also it sometimes says Followers and sometimes UNfollow, i didn't change that either.
The list goes on Dave, its so annoying.
I have delved a little into Wordpress and i agree with all your comments. I have set up a basic free site on Wordpress to trial run it but its not as simple as blogger. There are good videos on Youtube to help but as you point out it will take time and patience to get something fit to release. We will see.

Good to see you managed a satisfactory backpack. I still have to get my gear together and check it out. But very little has changed. May try to get out next week, hopefully in reasonable weather. Hope you get your blogger problems sorted.

Hi Martin, we had a good walk in very enjoyable surroundings. If you decide to go on an overnighter, give me a couple of days notice. We do have a table booked in town next Thursday night but apart from that the rest of the week is clear.
I'm still pondering over blogger.

Thanks Jim. Get yourself on the TGO Challenge and see it all in one go.

Ah, don't I wish, although a man from a dry climate like the Southwestern US would be like a fish out of water in a damp climate. Untreated goose down and open sided ultralight shelters I suspect will not work as well on the TGO as they do here. :)

Oh how I wish for a spell of your climate. Just one season would do. As for gear, both Z packs and Tarptent have both tested kit out on the challenge. Oh, and the sun comes out on occasions.

Well, I shall have to box you up a bit of our clime and send it your way. May it brighten your tent on the gloomiest day. :)

I do have gear that would work for something like a TGO Challenge (I think), but it would indeed be a challenge. It's like a Bedouin in a tropical forest, lol. And I'm a bit spoiled inasmuch as one can truly go ultralight here and get away with it. My Everlite down quilt weighs a mere 410 g, but get it wet or even damp, and it becomes useless.

I installed the Blog Manager app and you can edit posts on the iPhone using that even if the post was not published using the app. Once installed all your posts appear in the app. I'm not sure how many pictures the app allows you to post but I tested with two and it worked. I think Conrad was using Blog Manager on his recent trip.As you say Alan posts can't be edited on iPhone - or iPad - for that matter.

Good trip you had with a genuine 'wild' camp to keep you awake!

Probably same for me Jim. I doubt if I could hike in those temperatures but it would be nice to camp.

Thanks Gibson. I will give it a go before pulling the plug.

Thanks Alan - I'm a different person compared to a few days ago.