Tuesday 23rd June 2020
Today we started off with a bit of ancestor hunting in St Mary's church Prestwich. We had been doing a bit of family history during lockdown and I had found my oldest relative so far was called James and born in 1685 in Oldham. The family then moved to Ringley and then Prestwich and then Barton upon Irwell.
It seems they moved following work. They all were involved in farming, the silk and cotton industry and then as the industrial revolution became prevalent, the foundry industry. No wonder I'm an engineer and not a capitalist.
In the church yard we met up with a group of volunteer's who were very knowledgeable with the history and from them we found out that because a lot of the graves had become overgrown whilst lockdown had been in force we would be better getting more info about grave numbers etc.
We had a look round but with no success. We noticed all the flagstones had "M" cut into them. We found out that this was due to theft which happens on occasions. 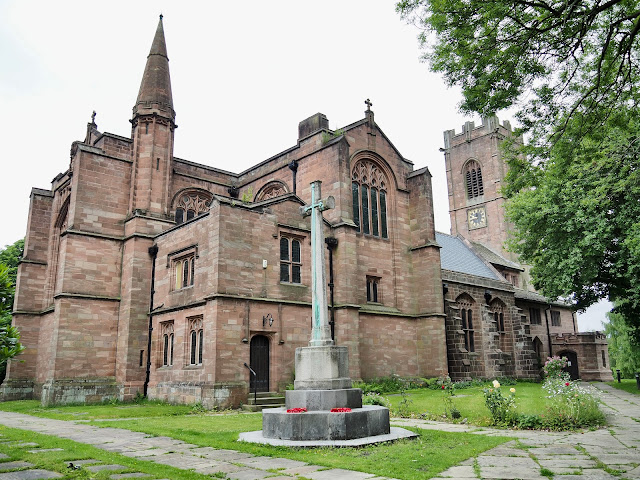 M marked flagstones.
There is a set of stone steps just inside the church gates, these were originally outside the gates and they were there to assist ladies dismount from their horse. They cost 8 shillings to be built in 1678 and installed and when they were moved inside the gates it cost 12 shillings just to move them. 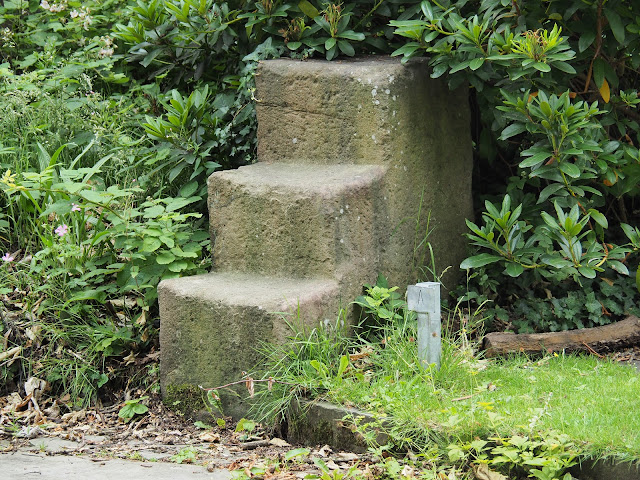 The ladies steps
From the church gates a footpath the left leads down to Prestwich Clough, once a hive of industry with the bleach works but today it's part of the countryside footpath system of Bury.
It's heavily wooded now and full of birdsong and is used by bikers and walkers. It leads down hill to the River Irwell and the sculptor trail. 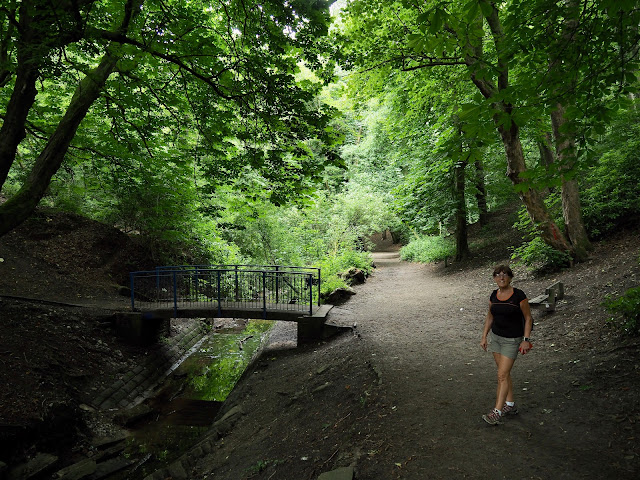 Prestwich Clough
Just prior to reaching the Irwell we turned north and headed for a small pond which is fed by Bradley Brook. It looked quite stunning today with the water lilies and water fowl. 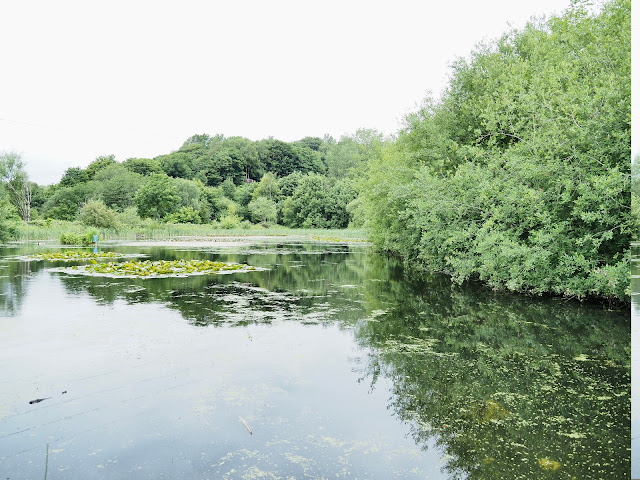 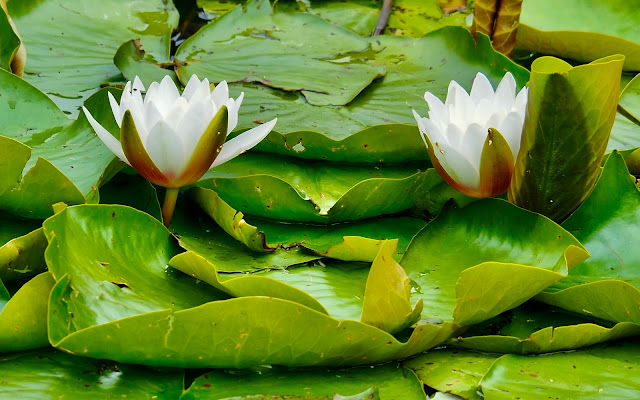 Water Lilies
Leaving the pond we joined the Irwell Sculpture Trail, this is a good walk in its own right, being 48km long and has 70 sculptures along the route.
We stopped at an old pier which we think was used in victorian days for the removal of what used to be called "night soil". Before the days of water treatment works. The Irwell used to be one of the most polluted rivers but now it is clean and has good fish. 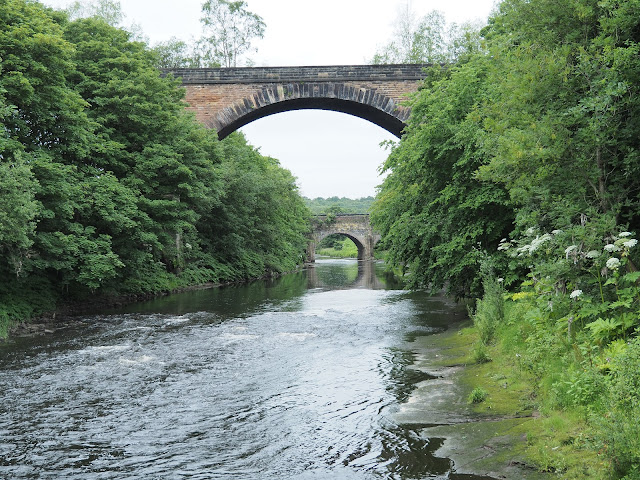 The River Irwell from the pier with 1st the old railway bridge, part of a larger viaduct (Now disused) and at the back the bridge which carries the Bolton,Bury, Manchester Canal. (now disused)
We tried to get up onto the viaduct but it is totally fenced off which is a real shame. The old track is available to walk, which we did for a short distance until it crossed the M62. This was our furthest point North today. Prior to the motorway being built there used to be another viaduct crossing the valley but it was demolished for the motorway. It was built by the Phillips family and the Railway company at a cost of £8K. 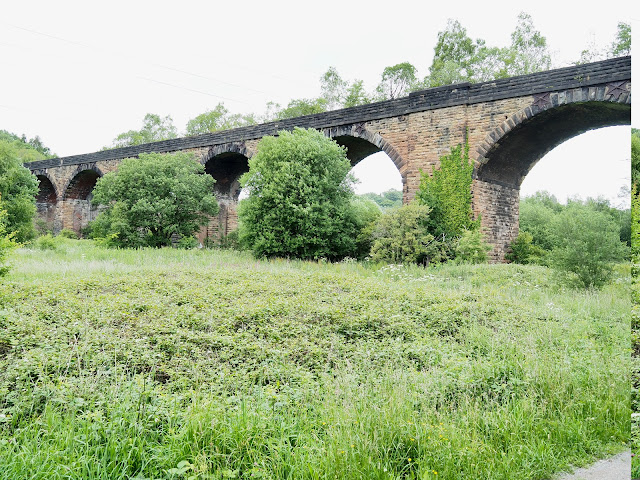 The disused Clifton railway viaduct, closed due to poor condition. There are 13 arches in total but my lens wouldn't fit them all into one shot. 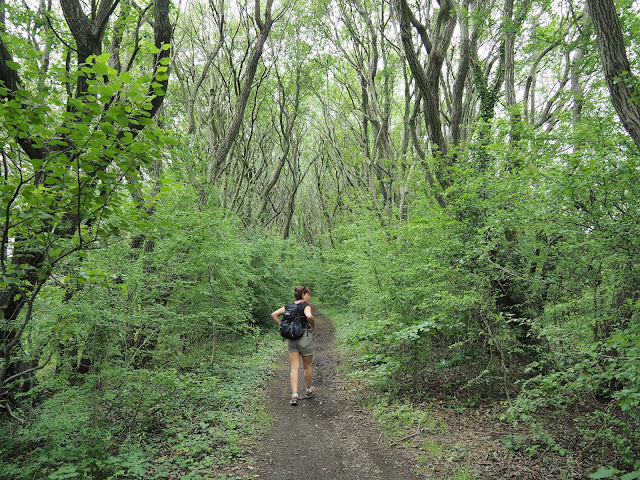 Walking along the old railway. 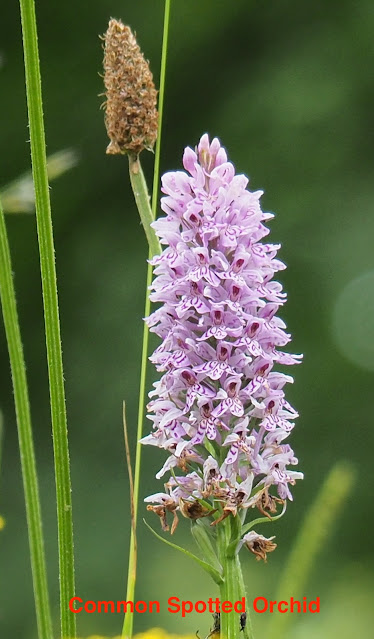 "Spotted" on the railway path. 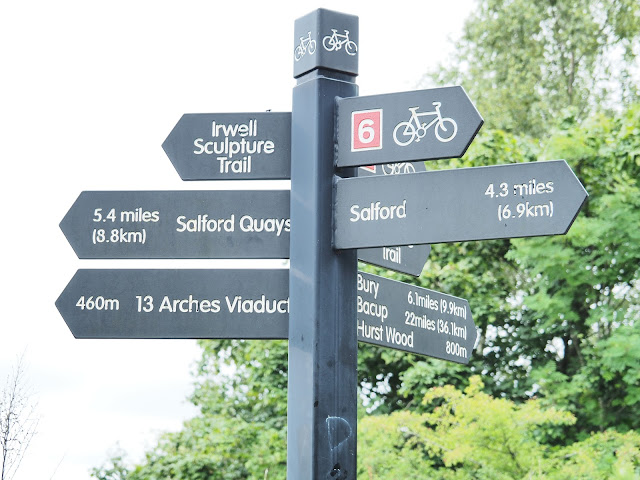 So many trails in one area, easy to make a mistake. 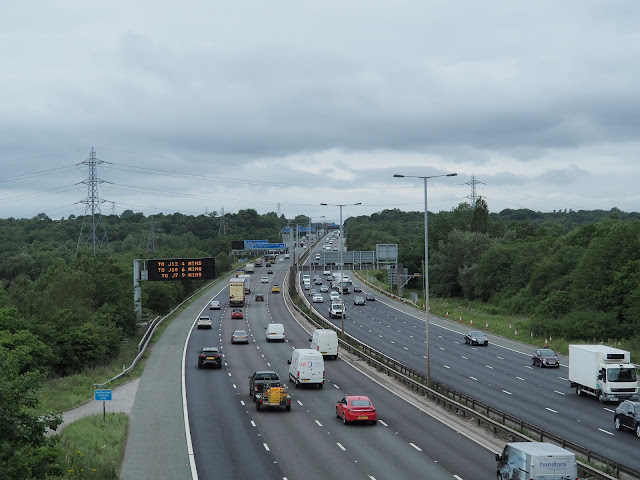 The M62 from the new footbridge where the demolished viaduct used to be.
At this point we decided to leave the ongoing track for another day but instead of retracing our steps we decided to head for the Manchester, Bolton Canal bridge and the opposite bank of the River Irwell.
The canal is undergoing restoration at some sections but here its still in a state of disuse and much of it is dry and overgrown. 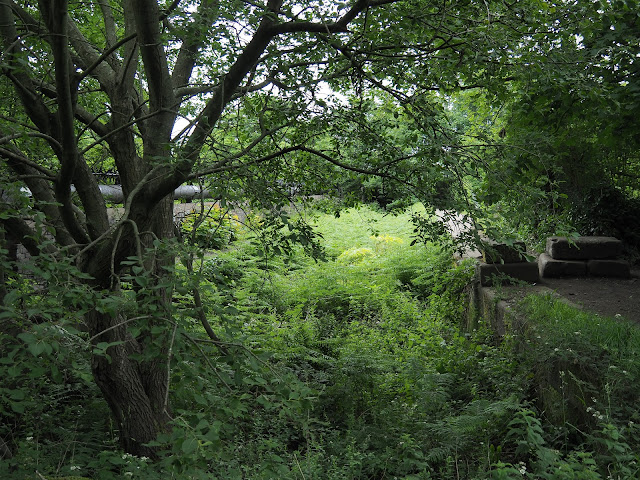 In all that growth lies the canal. You can see the towpath edging stones on the right. 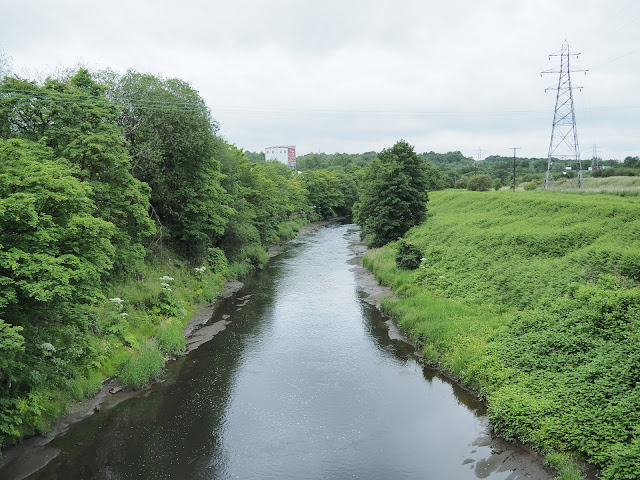 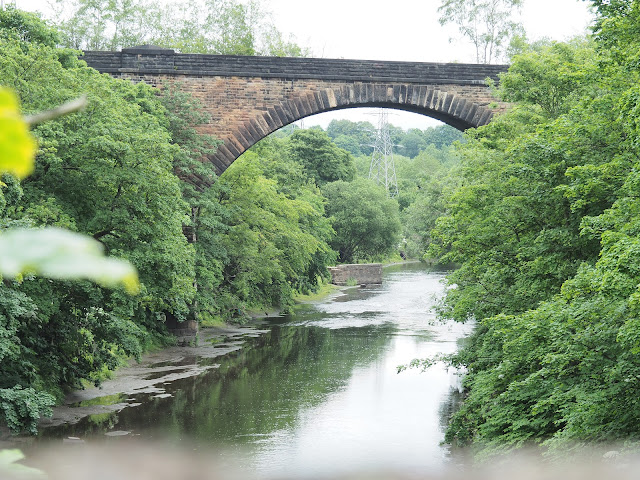 River Irwell looking south to the old aqueduct from the canal bridge. 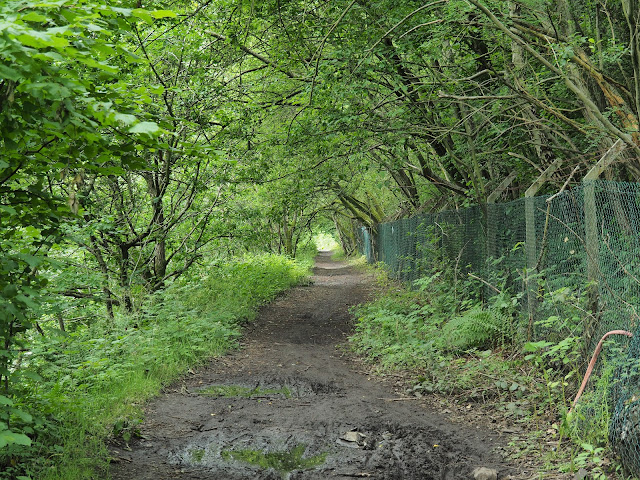 Light at the end of the tunnel. Irwell bank path.
It was a hot day with high humidity, the scent from Himalayan balsam and Honeysuckle strong. The dangerous Giant Hogweed had grown into large forests and at some points we had to be careful not to touch them.
There wasn't much bird life on the river today except for noisy Black Headed Gulls. 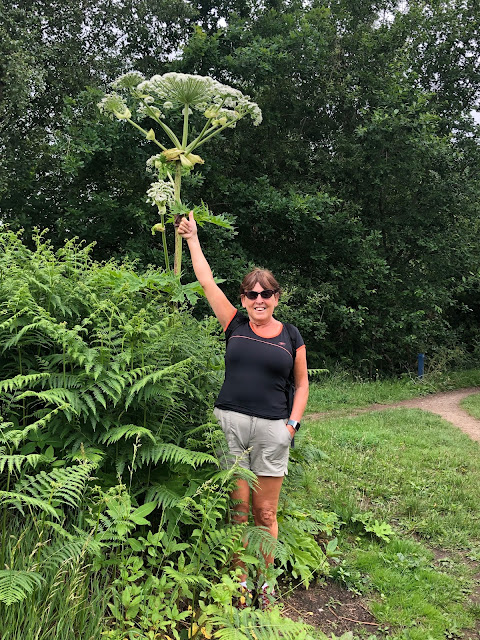 The Giant Hogweed. Must be 9-10ft tall.
It was pleasant walking along the river and we met no one. We passed an industrial site which was full of millions of plastic bottles. So we had found where all our conscientious recycling ends up. In a brown ground site in Clifton Junction. Not the most pleasant view.
It wasn't long before we came to the bridge to get us back onto the other bank. At this point I made a bit of a mistake. I didn't look at the map and we took the right path which was the wrong path. We should have gone left. It meant that we ended up at the car park at the entrance to Drinkwater Park. It put 30 minutes or so onto the walk and meant going through a large housing estate, but it was a nice day. 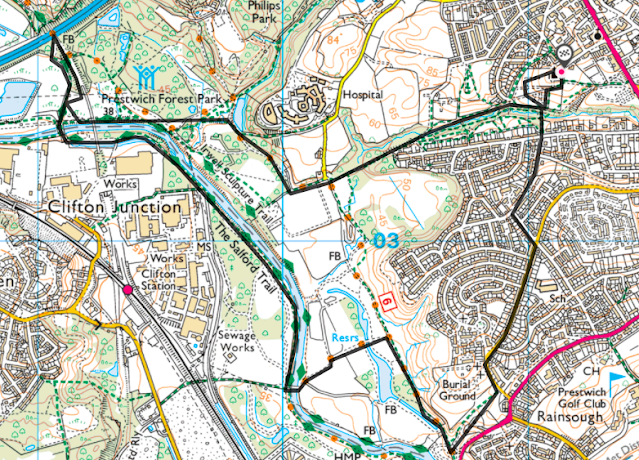 There is often more to see on these urban walks. I walked on part of the Irwell Sculpture Trail back in July 2018 BUT FOUND NO SCULPTURES - see the captions under the photos:

I remember Conrad's posting, and I was surprised that he hadn't found any of the sculptures, which admittedly are spread over quite a wide area.

We pass through this area on my off-road bike route to Bury. There's lots of interesting stuff if you find time to investigate properly...

I can vouch that there are plenty of sculptures on the Irwell. Maybe you was rushing to get through Salford Conrad. I can understand that. Ha.

The area used to be quite industrialised and I have just found out that one of my ancestors had Prestwich Clough farm in the mid 18th century. I will be returning to hunt down more info.