A short visit to Dunnerdale.

I had originally planned this camping trip for last week but a sore achilles put paid to that. We were just a little disappointed because we hadn't been up to see our friends in Seathwaite since before the covid lockdown in March.

We had to camp because we couldn't visit their house, but to be honest I was quite looking forward to getting the camping gear out again. If I could find it all.

Monday was forecast a wet day and it proved correct. It rained most of the way and had set in for the day by the time we arrived at the campsite in Seathwaite. We waited in the car for a short while to see if the rain would abate but no luck, so it was just a matter of getting the waterproofs on and getting the tent up ASAP.

I took the Kuiu Mountain Star tent which is an easy tent to erect and it doesn't matter if its raining, the inner tent doesn't get wet. Five minutes after the tent was up the rain eased slightly but it wasn't to last. At least I managed to make a brew before it started again. Only at this point did we realise that we had forgot the coffee so it was green tea. 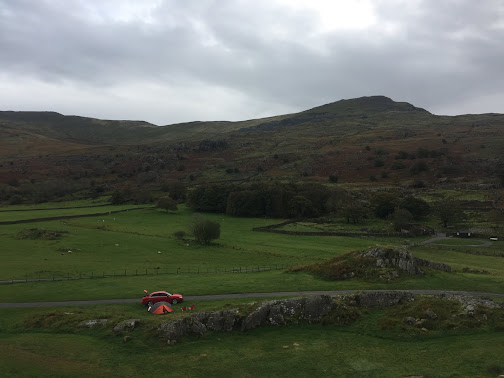 Tranquility in the Duddon Valley.

I had a short wander around the site and found there was only one other tent.

We lazed around in the tent for the rest of the afternoon, it just wasn't worth getting wet through, but later we had arranged to meet up with our friends in the Newfield Inn at 6.00pm come rain or shine.

The Newfield Inn opened its doors on 1st September under new management so we were more than looking forward to seeing what had changed. Considering it was a wet Monday night there was more folk in than I had expected. It was good to see our friends again, but no hugs.

I have to say that the menu was very good and the food was excellent. I had Steak and Ale pie and I wished I had taken a photo because it looked wonderful and the portion were very large. I struggled to finish it all but I wasn't going to leave any.

A notice on the bar said, "Breakfasts being served from 9.00am". This is new. I took a mental note.

The rain had stopped and it wasn't a bad day. My achilles was not causing me too much pain but I knew I daren't risk going on the high fells. I planned a short walk up the Walna track to take some photos but it seemed we just diverted and went up the good track to Seathwaite Tarn and back.

Once up at the reservoir it was a different day. From being a warm day down in the valley, it had now turned into a very nippy and windy day. Not a day to linger and have a picnic. On the way back we passed quite a few folk on their way up. I thought "I bet you think its a lovely day but just wait till you get up there".

When we got back we spoke to a lady who had gone up to Dow Crag. However, she had got blown over at Buck pike so decided to get off the mountain. Wise decision. 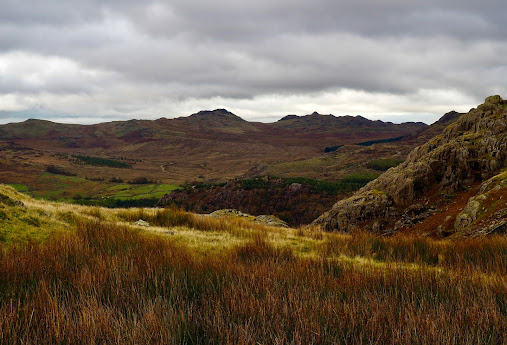 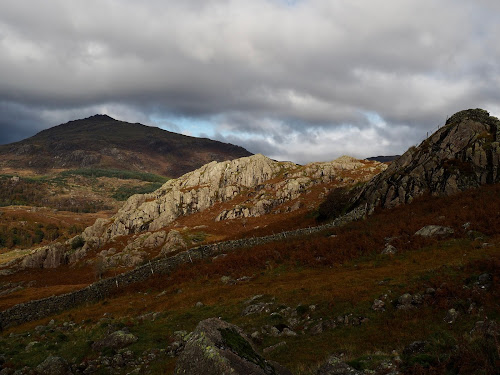 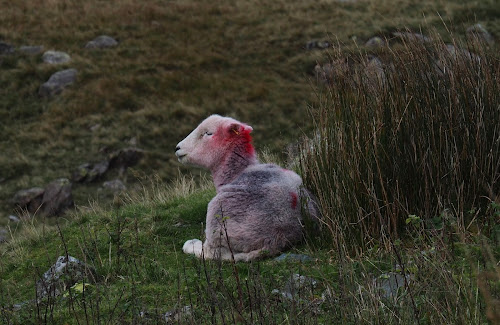 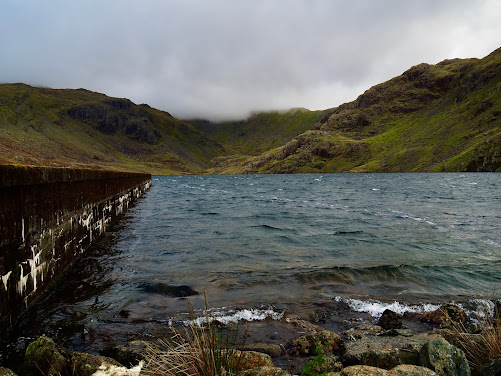 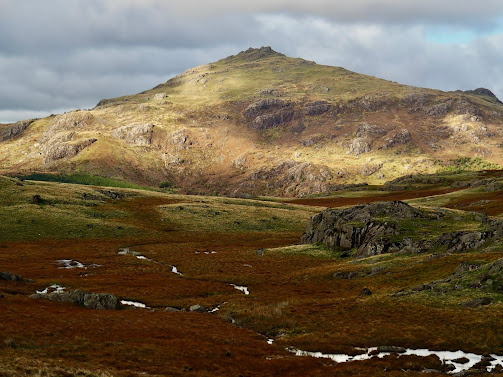 Once the sun was up it proved to be a lovely day so another short walk was called for. We headed for Fickle Steps, which is a series of large boulders and a wire handrail across the River Duddon. Luckily the river was not too high and we got across with dry feet.

It had been many a year since I had walked the Duddon Gorge and so it proved to be a good decision. We loved it. Such a peaceful path which undulates with great views of the river and higher up onto the fells. I had to be a bit careful in parts and just watch my footing on the rocky path. I din't want to twist my ankle and make it worse. We were in no rush anyway so it didn't matter how slow we walked. 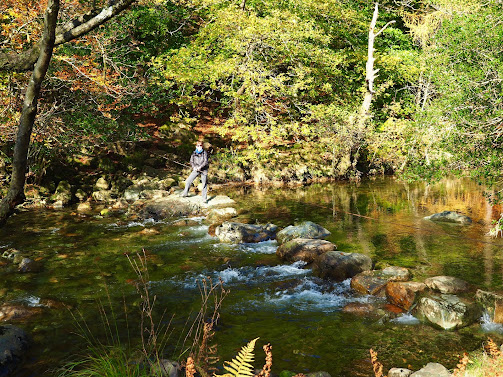 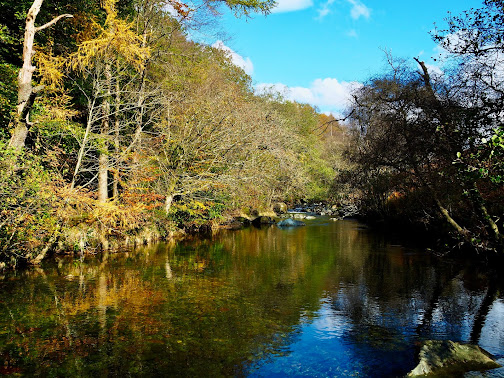 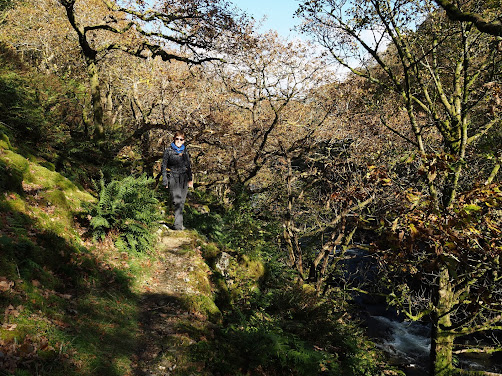 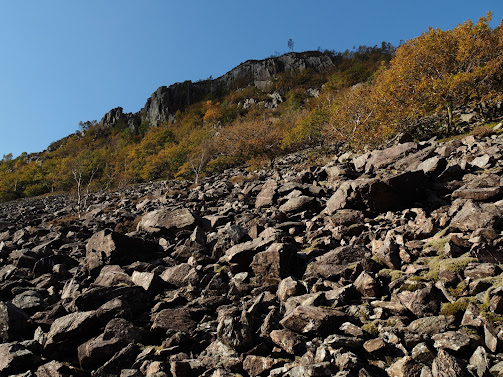 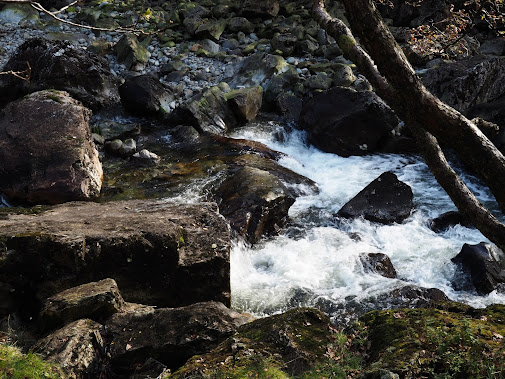 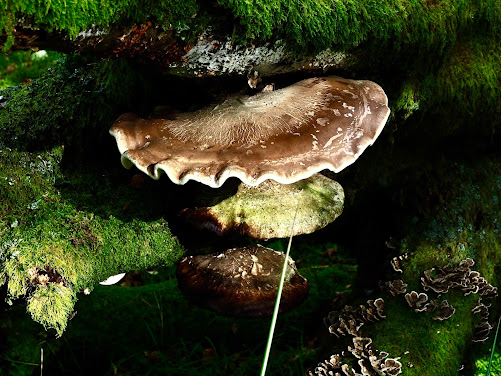 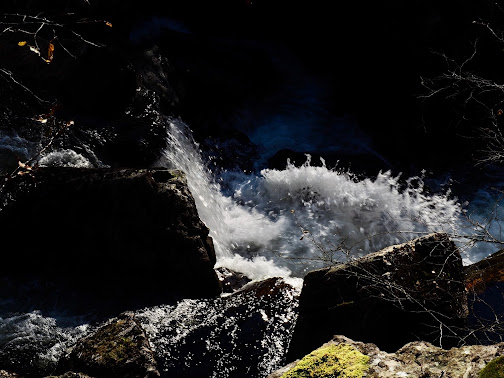 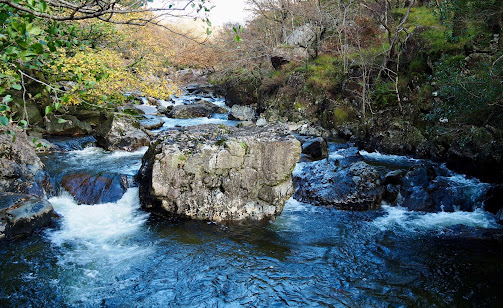 In the evening we headed back to the Newfield to socialise with our friends before leaving for home tomorrow. We suggested to have breakfast here in the morning which would be better than us cooking it. All agreed.

Wednesday night proved to be a bit of a chilly one and we were grateful for our -5 PHD sleeping bags. Just before we packed up we had a chat with the owner of the campsite and he was telling us of his good fortune at the Tup auctions were he had sold one for £18,000. Fantastic price. 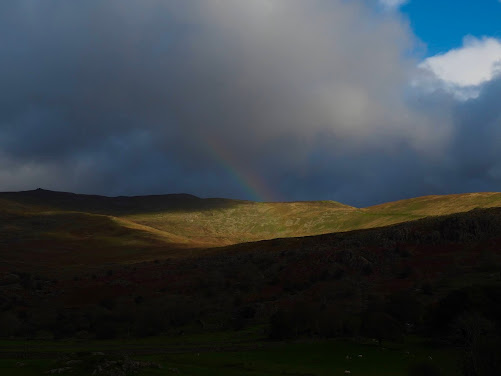 Breakfast at the pub turned out to be an excellent choice. Bacon, sausage, 2 eggs, tomato's, mushrooms, black pudding. Toast and coffee. It cost £9.95 and I know some will think this is a lot but it was worth it. It was quality and I look forward to next time.

Well that just about ends our short trip. Hopefully next time my ankle tendon will be much improved.

That's a lovely walk along the Duddon, only vague memories for us after so many years. I don't remember that dodgy-looking wire and boulders, maybe we didn't walk that section.
A nice little trip despite the overnight weather, at least you got out and pitched the tent. We've been grounded for ages, relying as we do on public transport.

Hi Geoff, the wire over the Duddon at Fickle steps has been there many years. Even before my first visit in 1982. I remember it being refurbished once after a flooded Duddon moved the posts. Cannot remember the year. As you say, it was good to get out.

I like the look of the Duddon gorge - some good autumn light. I'm a bit envious. Diary events seem to have coincided with any decent weather recently keeping me away from walking for a while.

It’s worth doing if you have never done it and parking is very easy. The light was really good on our walk.

Beautiful, peaceful and excellent pictures Alan. Dunnerdale is an unknown part of the Lake District to me and I really must put that right.

Well done on getting away Alan. Our tents haven't moved from their wardrobe this year.

Thanks Martin. I did have trouble finding all the gear after quite some time away from camping. It was fantastic to enjoy peace and quiet.