A short backpack in the Duddon Valley. Day.2

We all slept well and no rain overnight so we had a dry tent. Wonderful.

Today was classed as an easy day compared to yesterday so no need to pack away quickly. With the good weather holding the walk down the Duddon river should be a pleasurable experience.

The midges took full advantage of me opening the mesh doors of the tent and it was their breakfast time too. It was a bit of a shock because last evening as the sun went down there were none.

Breakfast was a casual affair before setting off across the intake fields to reach the path parallel with the Duddon. We walked in a downstream direction and Judith had decided to up the pace. 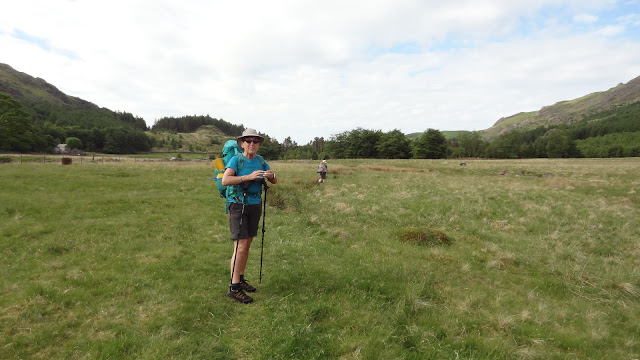 Judith is leading at pace, not a clue where she is going, but does it matter. No. 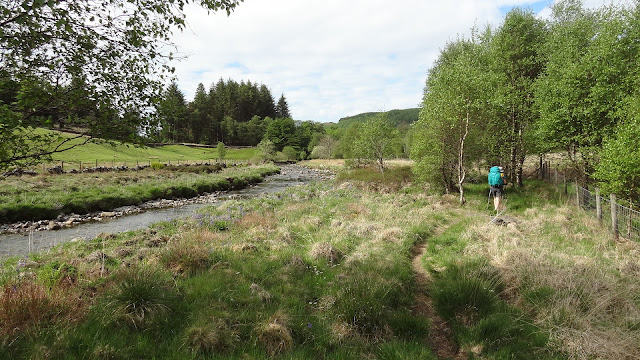 Bubbling River Duddon which was quite low considering how wet May was.
Just before Birks bridge with the lovely swimming pools we passed Birks car park which wasn't full but I noticed that the numerous picnic benches which used to be here had gone. Leaving just one. Rather odd.

The pools at the bridge looked very inviting. 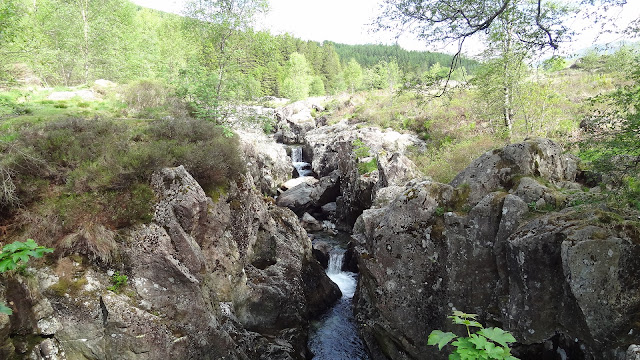 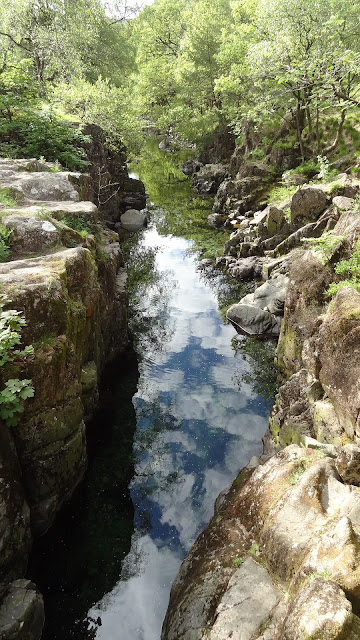 Pools at Birks Bridge.
Carrying on downstream we followed the obvious path, then when we came to the first stile with a dog flap we made a mistake. The path goes left and follows the river, which on the ground looks a well used trod. However it leads you/us into a dead end with steep cliffs or a swim. We retraced our step and found the right path back at the stile.
This path leaves the river and climbs above the cliffs passing through a Bluebell wood as shown in the pic below.

The path is a good one now, but drops down quite steeply to Troutal Bridge which we crossed and had a ten minute break. This is a lovely spot and a fantastic place to paddle your hot feet. Maybe next time.
Troutal farm has new tenants, people I haven't yet met. The previous tenants Martin and Sophie whom I had known for many years have now moved to Dumfries. There was no one around the farm so we plodded on along the road for just a short stretch before bearing left just after the cattle grid and heading over Troutal Tongue to Tongue house. 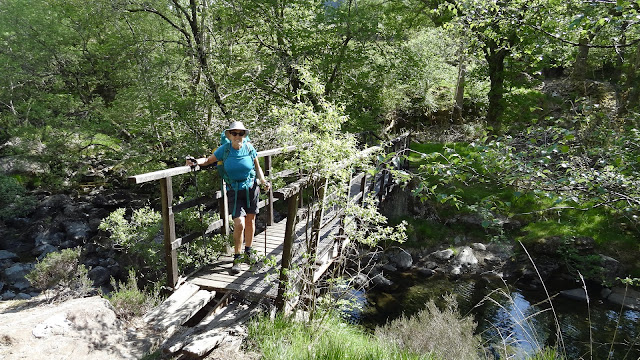 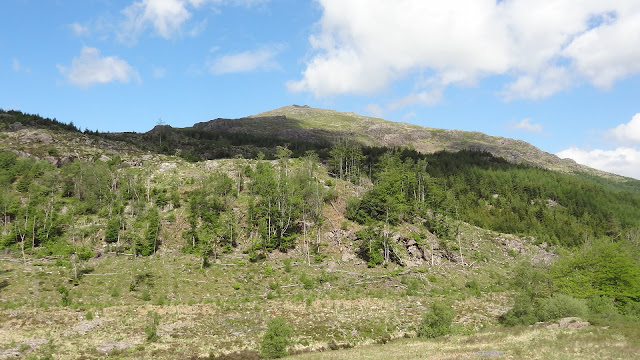 Looking back to Harter Fell from Troutal Tongue.
Tarn Beck flows through the grounds of Tongue House and at a small bridge over the Beck we decided to stop for lunch. As mentioned earlier, we were in no rush, so it turned out to be a good lengthy stop, enjoying the cooling river and the warm sunshine. 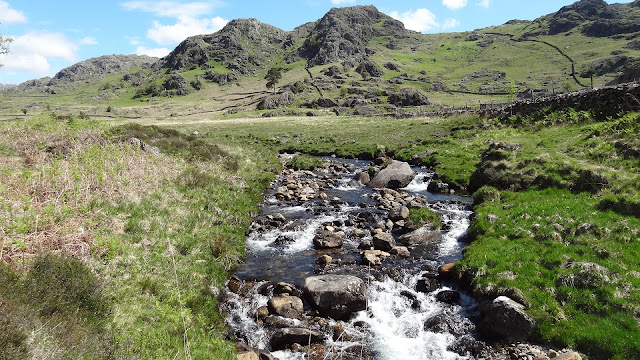 Our splendid lunch stop at Tarn Beck with the scrambling outcrops of Throng Close and Tongue House Close in the background. 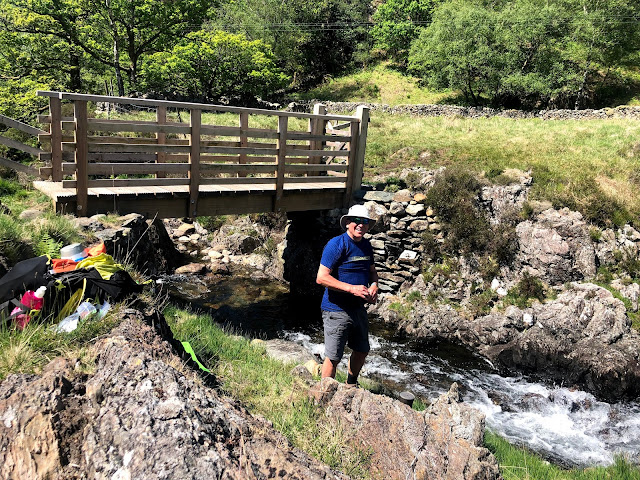 It was such a lovely day it was difficult to get going again but getting going was part of the plan. We had been practicing these breaks and we were getting very good at it.
Our next path was a steep one leading up to the landrover track below Lead Pike which goes to Seathwaite Tarn. 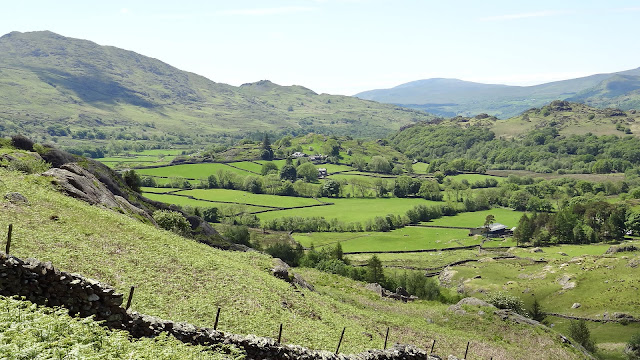 How green is our valley. 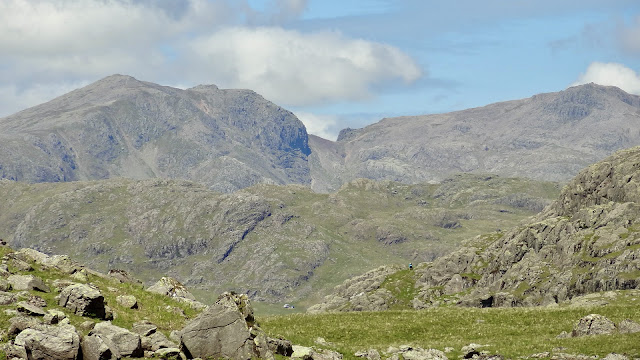 Zoom shot across to Scafell and Scafell Pike. 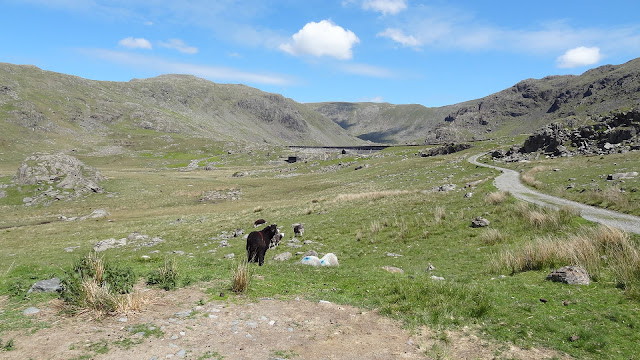 Seathwaite Tarn just coming into sight. Brim Fell ridge behind.
There is a path on both sides of the tarn with the majority of people using the left bank or the north side mainly. Originally there only used to be one path, on the south side, which was used by the miners pack mules during the old copper extraction days. This path has become a little hard to see on the ground in places but it's a far more interesting path than the north side.
The copper mines were worked in the late 19th century and when the ore was tested they found the first source of Wittichenite in the UK.
Construction of the dam started in 1904 and opened in 1910. It provided water into the Duddon for the use of Barrow.
Numerous ring cairns can be found around it's shores. 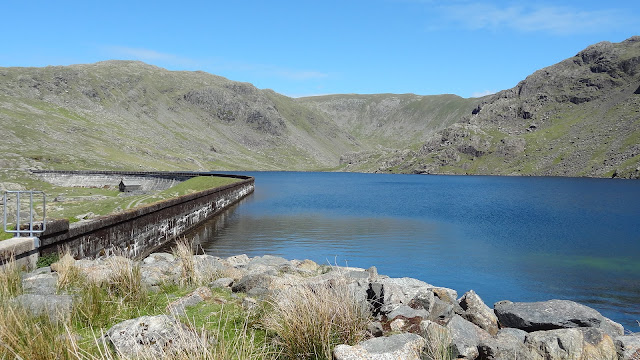 Seathwaite Tarn and Dam. At it's deepest it is 85ft and contains only Brown Trout. 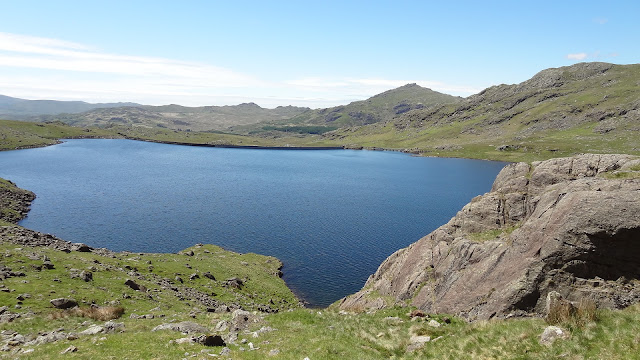 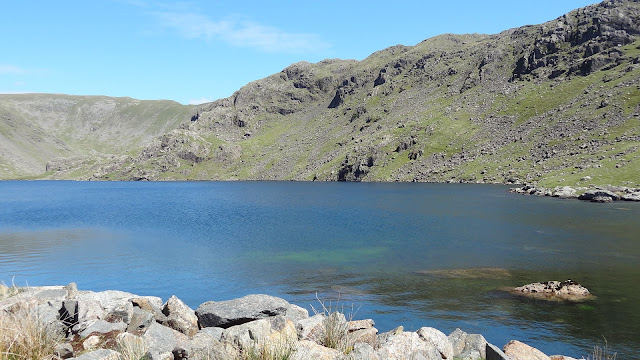 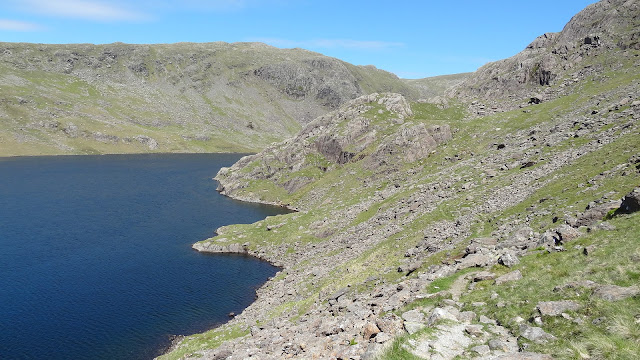 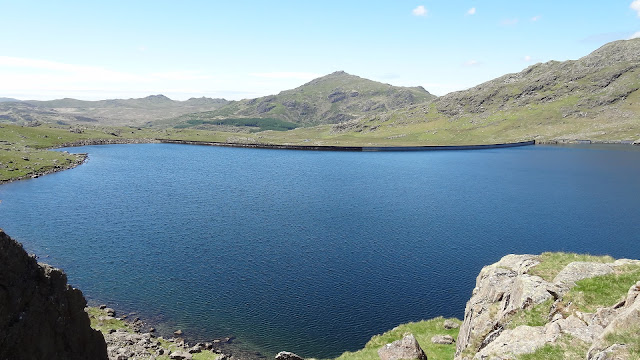 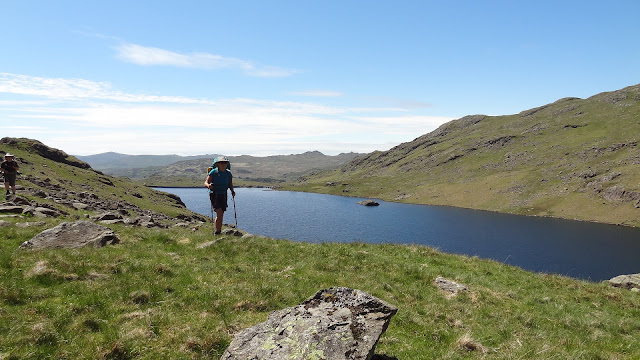 The area at the far end of the reservoir is usually very boggy and I had my doubts that it would be walkable but it proved to be ok. Our camp spot for the night was just at the confluence of the reservoir with Tarn Head Beck.
The late afternoon was still warm and our feet were glad to feel the cooling waters of the beck. Tents up, we had a lazy evening of reading and chatting. It had been a most enjoyable day. 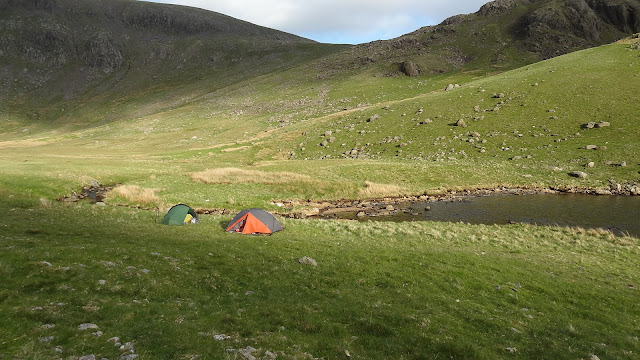 Tea tonight consisted of Bla Band Beef and potato with Bernaise. I can say this was the nicest dehydrated meal I have ever had. 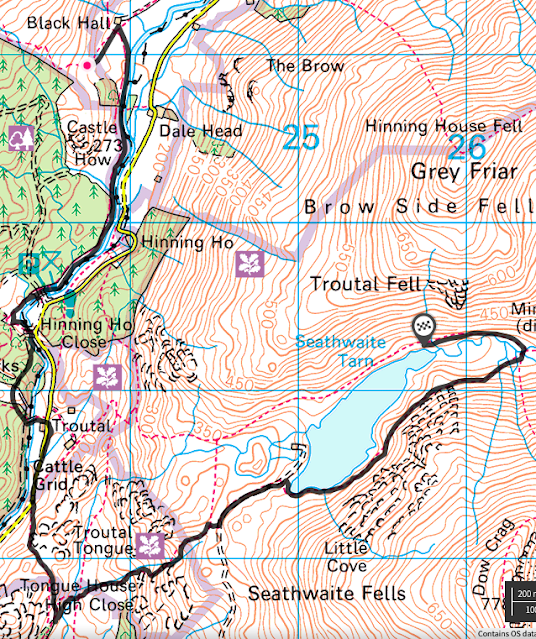