We are now back home from Sheila’s mums and i am now able to expand on the Kinniside walk we did on the last post.


(I’m still not convinced about blogging on the go but i don’t want this point to corrupt this post, so i will leave it at that for now.)


We drove up the cold fell road from Calder Bridge and parked at NY 05587. As Dorothy was walking with us today there would be no mountains being summited, we were basically following the Calder river to the watershed and then retracing our path. It was still good to be out though.
Following Friar Gill east we passed Friar well which is a natural spring but was covered in algae but larger than i had expected.
This area was originally part of the great church estates. The land being owned by Calder Abbey which is now a derelict ruin in Calder Bridge, a small village a few miles south of here.

Calder Abbey was founded in 1134 by Ranulph de Meschines, Lord of Copeland, for a colony of monks from  Furness Abbey originally as a Benedictine monastery. The Abbey was once one of the most enchanting in the British Isles. So its said.
After the Dissolution in 1536, when Henry VIII’s demolition teams began their work of closing the monasteries, the monastery buildings slowly became the ruins they are today.
The privately owned abbey is not normally open to the public, and views from the nearby road or river path are a bit restricted.
However the numbers of people who go and have a peek at the ruins are growing so maybe at some point the owners will grant access.
As we made progress further there are good views of Caw Fell, Haycock and Seatallon. Visibility was excellent today although it was bitterly cold in the shade and still quite a bit of frost on the North facing slopes. 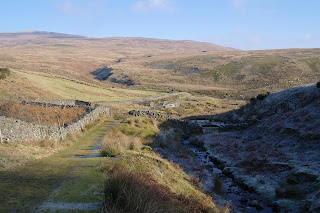 It’s a good track down to the confluence of the Gill and the River Calder where a sturdy foot bridge is crossed. 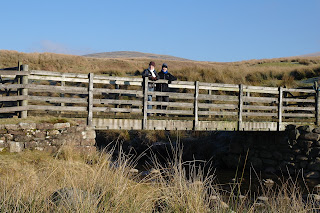 Over the bridge the path splits, one heading east for the ridge line following Worm Gill up to the North of Caw Fell and our less adventurous path heads north towards Blakeley Raise.
Not far along this path and down to the left we passed Monks Bridge.
According to information this is the oldest pack horse bridge in Cumbria and was built by the monks from Calder Abbey. 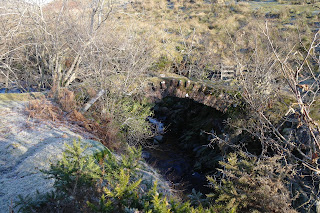 A number of official websites state that this bridge was built over Friar Gill. In my opinion it’s not. It’s built over the River Calder.
More good pictures of the bridge can be seen here:-
The sun was giving off some heat at last and we could take off our gloves and hats and the odd fleece. It’s a reasonable path following the Calder although there are some difficult bits to cross if your not too good on the legs such as Latterbarrow Beck. However it is worth it as you pass Gill Force waterfall.
On our right hand side is Lank Rigg at 541 metres. There is lots of history here with numerous sites of cairns, settlements, homesteads and a Tumulus near the summit. There is also a trig point here with good views across to the Ennerdale peaks. Those peaks were not for us today though.
In about 1/2 hr you come to the watershed of the Calder and there are a number of routes from here where you can extend the walk and with varying grades of walking.
Its a lovely area and one we plan to come back to.
For us we were retracing our steps back but it has been very enjoyable if short walk. 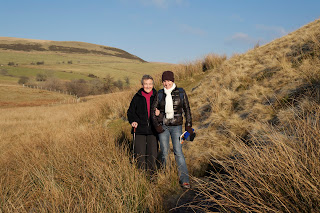 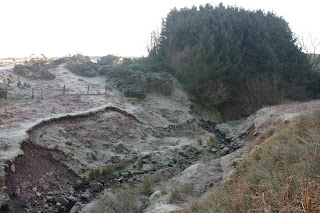 Some more photographs of our bimble can be seen at this link.
Posted by AlanR at 12:21 PM

Very nice pictures! You met some sheep, too - like them. I'd certainly like to swap our winter weather with yours, yours looks really enjoyable!

Hi Maria,
Thanks for your comments on the pictures.
Yes we like sheep, or woolly watchers as we call them.
The ones in the photo’s are the Herdwick variety and a few Swaledales as well.
The origin of the Herdwick is from Scandinavia so you may have seen some of their relatives.Ha.
I understand what you say about the winter. Its nice when it starts but its nicer when it goes.
Its ok when its cold and clear but that doesn’t happen very often here. Like today its grey, cold and raining. It doesn’t get light properly on days like these.

Good post Alan and packed full of interesting information. Thanks.

Hi Gibson,
Thanks for your comment. We are just enjoying a bit of sun in Spain at the moment. Have now read the lone wolf book. Intersting.