In more ways than one Sheila and I needed a bit of a break from the UK, so i checked out some places to go that wouldn’t cost a fortune, relatively close to home and where we could get some sun.
I chose a last minute deal in southern Spain, Fuengirola in fact.
This was to be a week where we could relax and it wasn’t going to be a week of walking.
I hadn’t been to this part of Spain so i asked around and worryingly i didn’t get any rave comments.

Oh well, it was booked and it’s up to yourself what you make of the place. What some people like others don’t and visa versa etc. and it was only for a week.

We had a good flight and drop off at the hotel. It looked a nice hotel. Checked in, room good, view pretty good, sea in front and mountains behind. Very pleased. 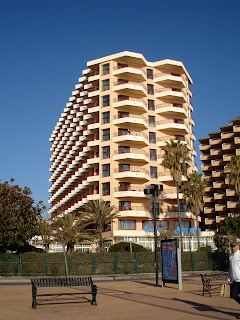 The Hotel Angela.
We had booked half board so basically we had nothing to worry about like shopping or cooking and so we set off to get our bearings in town.
It was so nice to feel that hot sun on the body and so nice to be shorts and T shirts again, if only for a week. It wasn’t long before we found a bar and sat watching life go by. 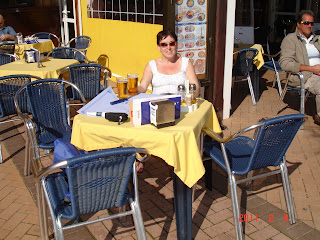 The client-el in the hotel was definitely on the “Old” side but hey they know how to enjoy themselves and they were mostly a friendly lot. We thought that a remake of the film Cocoon was being done.
The food was English basically but vast choice and good quality. No complaints at all. It would have been nice to have some Spanish cooking but i can imagine that complaints would come rolling in from some stuck in a time warp.

We decided to go out on the search for some authentic Spanish bars which proved successful and we were warmly greeted. Because we made the effort with a little Spanish language we seemed accepted and although their English was far better than our Spanish we made the effort to ask how we pronounced some words and what the meaning was. It was great.

Unfortunately on one evening we went into English bar in the back streets and i was ashamed to be English. What the Spaniards thought of these people and subsequently the knock on effect to other tourists i would hate to think. The language and the tone was a disgrace. Luckily this was the only bad part of the whole trip and fortunately it was the only time it occurred.
I would not like to visit here in the busy summer period thats for sure.

In the mornings, post a good breakfast, we set off for a walk. I know i said no walking but the promenade, or paseos in Spanish, was a delight to just slowly wander down.
At one end is the Castle of Sohail built in the 10th century probably by the Romans but rebuilt in the 12th century by the Moors. 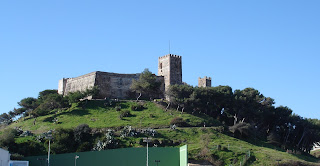 What is there today is due to a restoration project started in 1989 and they have done a good job. It’s well worth a visit and the views are terrific.
The paseo starts a 1/2 mile or so west of the castle and continues east for about 5 to 6 miles i guess, to Belanmedina. Along the beach at regular intervals there are Chiringuitos, these are a cross between a tavern and a restaurant, they do wonderful seafood and we can recommend one close to Los Boliches square. We loved the Paella. 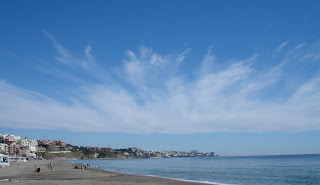 On the sea front walking towards carvajayal.
As the photo above shows, the place was quiet. Not yet the tourist season. Most of the people walking were Spaniards dressed in full winter gear of hats gloves and big coats. Its no wonder the English are perceived mad because we were getting strange looks in our shorts and T shirts. It was sunny and 18 degrees, what did they expect.


I was quite surprised to find how many Scandinavians lived there and there were plenty of Finnish people and a Finnish school in the area. Like us they must go there to get away from the winter months in there own country.


Looking back we have enjoyed our visit to Fuengirola. It’s spotlessly clean and quite well manicured. The people were nice, helpful and fun.
I wouldn’t like to go in the season and i think this is where the poor comments came from when i originally asked about the place, but out of season it was great. Its easy to get around on cheap busses and the train is right there too. The hills are close by and the walking would be good.
There was still snow on the tops so i presume there would be some winter skiing areas too. 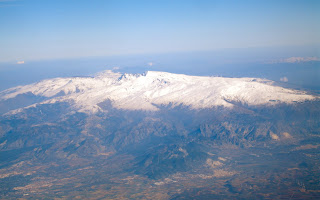 This picture was taken after take off so it is through 2 thick pieces of glass.

The downsides for us:- 1. The English bars, 2. The sea is still very cold. 3. The people who stop you wanting to do surveys who are basically trying to sell you all sorts, don’t give them your time and remember that nothing is for free! Apart from that, Great.
Batteries recharged.


Some other photos of the trip here if you are inclined.

Sounds like a restorative trip and Shiela looks well settled with those beers! Although we rarely go abroad now we found, like you, that the local people were very helpful when we made an attempt at their language.

I can feel the sun in those photographs!

The sun, oh the sun was wonderful. Bring it on!

A week in the sun - especially with half board - sounds like wonderful just now! I'd certainly need some recharge at the moment. I can imagine how the locals were looking at you in T-shirts and shorts :) But we are having -18 now, so +18 sounds like h-o-t!

I hope the Finns you met were not behaving badly - they sometimes are, just like your fellow Englishmen as you told :) But yes, there are quite a bunch of Finnish old age pensioners who spend their winters in the warmth of Spanish sun. What I did not know was that there is a Finnish school in the area!

Lovely photos, #35 of the set being my favourite (the one with the stones covered with mossy seaweed).

Thanks Maria for your comment on the Pic.
Outside the hotel was a Finnish Estate agent and it was also advertising the Finnish School.
I am pleased to say that we didn’t meet any Finns behaving badly. If they are like Islanders then i know what they can be like when they are up in the hills and have had a few beers.