CÀRN Cobra’s. His and Hers. 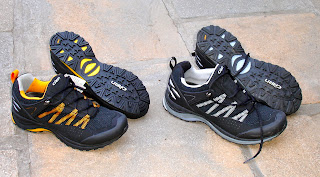 Cobra Trail Shoe, Sheila’s on the left, Mine on the right.
The first time i saw these CÀRN trail shoes was when i was reading a post about them on Lightweight outdoors blog here.
I kept them in mind and when the opportunity came to have a look at them first hand i thought they were impressive.
CÀRN are a relatively new company (2009). But have been designing shoes for other manufacturers prior to going it alone.
Some of their footwear has been influenced by Ben Fogle, but not these as far as i am aware.

Straight out of the box they feel sturdy and relatively lightweight.
My size UK8 weigh 397gr. and Sheila’s size UK5.5 weigh 350gr.


The first thing you notice about them is that they have no tongue. I liked that idea.
The large toe bumper was also something i was looking for as my current Inov-8 toe guard was quite small.
There is a huge comfort difference to my Inov-8’s. The cobra’s felt like slippers in comparison. There is more padding on them.  I wondered if this would result in them holding water and taking longer to dry, this will have to be tested out.

Having worn them for a week i can say that my first impressions are very good. They are especially good on rough stoney ground, the foot bed urethane cushioning is excellent and very noticeable. It was a pity i hadn’t bought them prior to my recent Moffat to Peebles walk which included much gravel walking.
I was equally impressed with the grip of the sole. They stick well on rock unlike my Inov-8’s.
I was not impressed with the Inov-8’s sole originally but as the sole wore down the grip improved. They became more slick.

The shoes are not lined with a waterproof membrane which suited me as i wear a Gore-Tex sock when it’s wet.
The upper fabric material is Trek-Dry, a Bamboo derived fibre. It’s said to have superior moisture management allowing body heat to be quickly wicked away whilst allowing cool air through.
The Insoles are shock absorbing and Anti-bacterial and are Poliyou® made by Kun Huang.

I was also impressed with the shop i bought mine from which was Footsteps Direct in Kendal. They were very helpful. This was my first visit to this shop but it won’t be my last.
Unfortunately they hadn’t got any 1/2 sizes in stock and so we ordered Sheila’s from Fitness footwear.

What was surprising was the price difference. I paid £55 in store for mine and Sheila paid £75 on the internet for her’s. So the internet is not always cheaper.
The other thing is, there are not too many outlets that stock them so you may have to travel to handle a pair.
Posted by AlanR at 2:09 PM

They look rather good.

Hi Robin,
So far i am very impressed with them.

I must say I hadn't heard of Carn but those ones look just the job. Unlined and plenty of mesh they should be cool and quick to dry while the decent looking toe bumper should provide enough protection. Look forward to more details as and when.

Alan, I first saw Carn shoes several years back at the Outdoor Show, but I have not seen them in retail outlets. Sound good I might give them a try.
Alan, what brand of goretex socks do you have and where did you get them?
Mark

Hi Richard,
They are very comfy. I can;t wait to get them on the hill. Some long contouring walks will find out if they are good enough or not.


Hi Mark,
I use Gore bike wear. I tried Seal Skins but they didn’t work for me. I ended up with wet feet. I havn’t tried Amphibians but i am happy with the ones i use. Link below.
On really wet days my socks feel damp not wet but the outer of the Gore sock is wet, so they work well.
http://www.rutlandcycling.com/17163/Gore-Alaska-II-Socks---Black.html

Phil Turner used them a lot and liked them. Width wise Alan do they compare to say Inov-8 Terrocs? I might be tempted for their cushioning and grip on the Challenge would suit my route.

Just bought some more Innov8s but these look cool.

Martin,
Width wise they are made on UK lasts and are regarded as wide fitting. I have such feet and can confirm they fit me well. I have the Roclite 320’s and the Carn’s are a little wider. I havn’t tried Terrocs but i would guess they are made on the same lasts as my Roclites.
If i was Challenging this year and had a choice between the Carn and the Inov-8 roclites i would choose the Carn’s because of the excellent side and footbed cushioning. The Carn’s grip is far better from new.
I havn’t got them wet yet Martin, so i cannot say how fast they dry but i’m sure Phil has.

Hi Greg,
When we went to Kendal, Sheila was all set to get a pair of new Inov-8 330 or i should say the ladies equivalent of them. (Not sure what the no. is). But when she saw the Carn’s she changed her mind.
A woman changing her mind! That must speak volumes. Ha.

Alan, thanks for the info on the Goretex socks
Mark

A great shoe by CARN. Innovative and looks good too.

Hi Stephen, Thanks. It is more suited to a wamr climate than the UK as it takes a little too long to dry but it's a comfy shoe if you walk hard tracks. Otherwise i would consider using Inov-8. Slightly less comfy but dry far quicker.