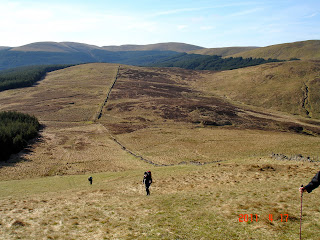 Up from Camp to Bodesbeck Law.
After a chilly night, we departed camp1. The contours were reached immediately, in fact Judith had probably done them already 2 or 3 times in search of a loo with a view. The incline warmed us up and the fleece layer came off quite quickly. This top was Bodesbeck law at 665 metres. 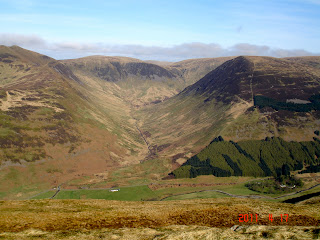 Black Hope
Again, stunning views all round and especially up the glacial valley of Black Hope, Carrifran Gans and along the valley floor of Moffat Dale. This was going to be a superb day, we could see all the route ahead.

We made easy progress along the ridge following the fence line and each top opened up new vistas.
Whiteyaud Head on the way up to Nowtrig head at 608m 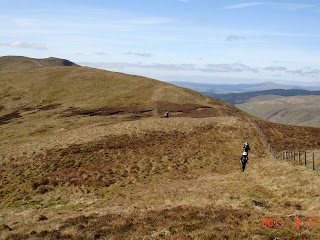 Looking back towards Bodesbeck Law.
Mid Rig came next 616m and we caught the first glimpses of Loch Skene. 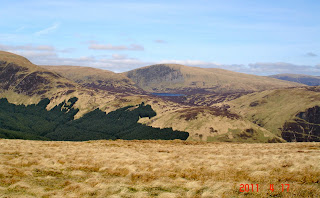 Loch Skene (centre)
The top of Bell Craig 623m is just off the fence line so while some had a bite to eat Mike and i walked the short distance upwards to the top of hill. No cairn or marker even.
The highest top of our ridge Andrewhinney Hill 677m, then Mid Rig 657m, Trowgrain Middle 625m and Herman Law 614m offered great views and easy walking on this dry clear day. 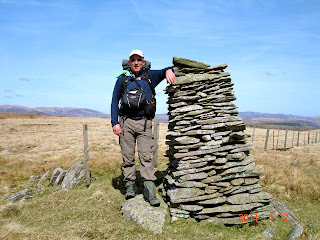 We actually met 3 people going the other way. That made the grand total of 4 people seen so far.
Following the fence line east from Herman Law the prospect opens up to reveal Loch of the Lowes and St Mary’s Loch, today with the blue sky they looked wonderful. 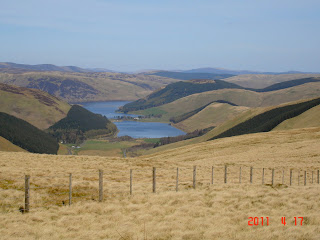 After Peniestone Knowe at 551m we left the fence line and descended via Pikestone Rig to rejoin the SUW for a very brief encounter before it turned towards Earls Hill and we descended to the Loch of the Lowes.
We chose a particularly bad route to get to shore line, my fault for being in front i suppose but the rush was on as we could smell the beer and chips at Tibbie Shiels Inn.
A table was empty in the sunshine and the rucksacks dropped to the floor.
Pints ordered and drank and food ..... No chips etc we had missed the time by about 15 minutes. But we could have sandwiches, which all but Mike did. Another beer and we were ready for the final leg along the loch to find a camp site somewhere near the weir at Dryhope. 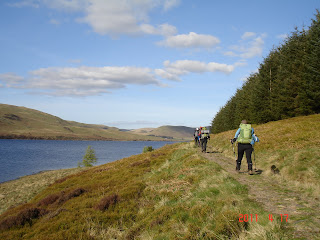 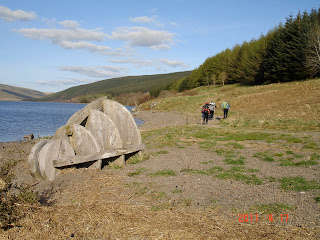 Along the loch we came upon 2 of these strange beasts. 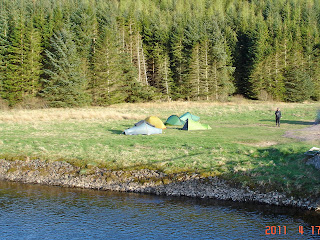 Camp 2 at the weir.  Dryhope.
During making tea, or dinner depending on where you come from, a lady who had a car close by said that she would disturb us at about 6 am in the morning as she started up the car. We had to be up early to enable Laura and Louise to make the connecting bus from Peebles to Up North, so that was seen as a good alarm call.
Again we had a chilly night but not quite as cold as the previous one. There was no breeze at all so we had plenty of condensation in our wigwams..

I should admit that one of my Tibbie Shiels beers didn't make it to the table outside..
it must have evaporated or something.
I'm enjoying your reports, alan - brings it all back so it does...

Some gorgeous photographs there Alan, brings it all flooding back to me. However, I need a bigger rucksack to make my bum look smaller! Thanks Alan... :-)

Aha. Looks like we have another convert to the hopes, cleuchs and laws of the Southern Uplands !

Mike, you craft B.

Louise, Mike said there’s nothing wrong with your bum, it was in his view most of the way. HA.

Oldmortality,
Yes a borders convert i have to say.

...at least I didn't have a hole in my trousers I s'pose!

Louise, I think he would have said something if you had! (i dread to think what it might have been though).

A lovely place to spend a night camping. Reading outdoor blogs is dangerous - there are so many places I'd like to walk in! There seems to be plenty of them in the UK.

Hi maria, There are so many places to walk in the uk. I will never get to finish them all.
We would love to walk Finland one day too.
I have been to Iceland, Norway, Denmark but never Finland, so i should put it on the list.

Great report, Alan, and you've helped me remember where I took some of my photos. (I really wasn't paying attention for lots of this trip!)