Enough of stats now. Lets get back out there.

Today's walk was to the aptly named Hail Storm Hill. We set off a little late at 12 ish, we parked the car in a flowing stream.. It's normally a cart track but today with the persistent heavy rain, the track was flowing quite well.
Opening the car door was a bit of a struggle, the wind was strong and before we got round to the boot our clothes were a bit damp. Quickly we put on our shell gear which today included my OMM smock. The one i had a problem with water ingress from the main zip a little while ago.
Making some height along the good track up Rooley Moor, all around, the higher ground was shrouded in clag. 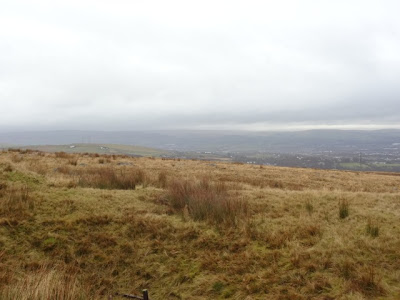 At times we had a clear view across the reservoirs to Knowle Hill and the Scout Moor wind turbines. 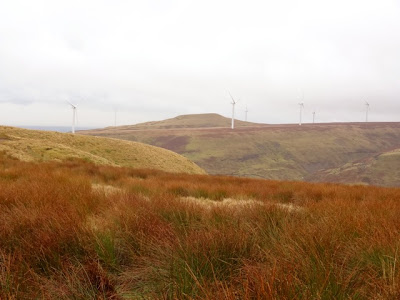 It wasn't nice walking, head down, rain in the face and eyes and the clag closing in. I wondered about calling it a day but it was good to be out, even as bad it was.
Not a soul was around, only us loonies.
The track has had lots of drainage work done recently with gutters cleared. Today they were flowing fast and noisily.
Once we made the watershed we left the good track and headed east to Top of  Leach. It was very boggy but quite quickly the trig point came into view along with the boundary post and the wind shelter. 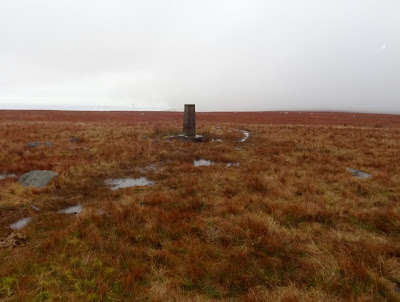 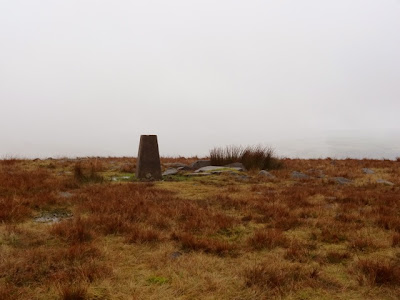 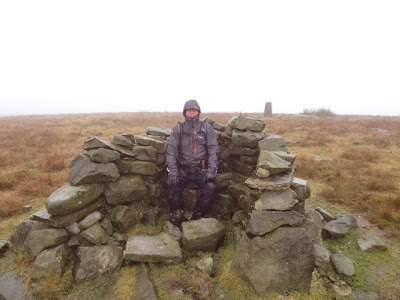 There was nothing to see today except clag. It was getting a bit cold and Terry's gloves were no use what so ever. They were supposed to be waterproof but they have definitely had their day. We had a quick walk along the boundary path to Hail Storm Hill and although the odd turbine came into view the clag was not going to be clearing. 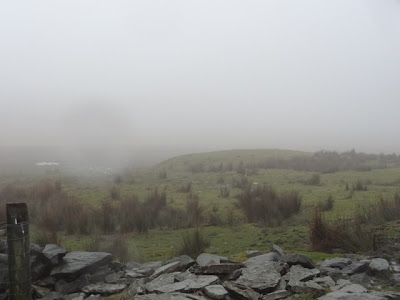 Backtracking to the shelter on the Leach, we got behind the walls and had a coffee. I was glad i had brought the flask instead of our usual stove and pan. I also brought some of Sheila's Apple and Date flapjacks that she made yesterday. 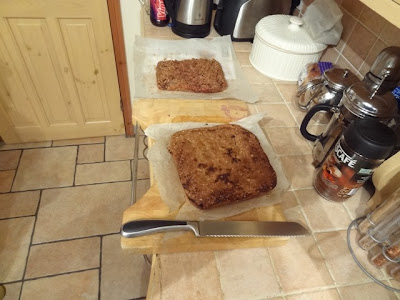 Thanks Louise for the heads up on the recipe.

The rain was not letting up. Joining back on the moor track we found a brand new scissor jack and a length of rope. Obviously somebody in a 4x4 had got into the ditch and needed help to get out. I put the jack in a spot that it could be found if the owner decided to come back. 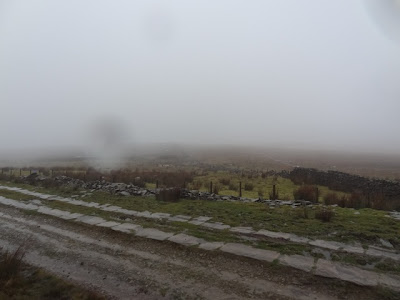 About 20 minutes later we were passed by a 4x4, maybe it was his jack.
We got a bit of a shift on as Terry's hands were so cold now. Mine were also cold but dry.
It was great to get back to the car, get the wet gear off and finish what was left of the coffee and kit kats.

I now know my over trousers need re-proofing, but the good news is that the spray proofing i put on the OMM zip (Thunder Shield) and the vaseline at the zip garage seems to have done the trick. The smock didn’t leak whatsoever.

Hope you enjoyed them!

The first batch, we put syrup in and they were a bit too moist but so yummy. The second batch without the syrup was excellent. We put raisins in as well. I worked out the kcals per slice and it was just over 400. The recipe says 530kcal so i presume the ingredients were slightly different.

Well done Alan, the people who want their good gear testing will come flocking in if this is what you do for fun The OS seem to have a slight problem with the name of that hill though. Should it be renamed 'Trig Point Hill'?


Whooo. The good gear will come flocking in. Well yesterday it came flooding in. The rain, not the gear.
Yes the Leach has a Trig point and a tall boundary stone plus what seems like an air shaft (Guess) and a wind break. Gloves, thats the problem

I notice that Mal Creasey, in the current (Jan 2013!) Trail Mag says "Carry at least 4 (FOUR!) pairs of gloves in winter."
Come to think of it I generally do that, as the conditions can change and hands easily get too hot or too cold. On really cold days I suppose mitts (with overmitts if it's raining) are the best bet. As with all gear, personal preference is fairly relevant. For example, my Sealskinz work well most of the time for day walks, so long as I put them on when my hands are dry, but many people seem to dislike them.

Yesterday i had a pair of liner gloves with a cheap pair of nitrile work gloves. They keep the rain out but do sweat a little, hence the liner glove. My hands were dry but cold. I need a thin insulation layer. I will look out for the flock lined type.
My Divers gloves work well but they do sweat more than i like.
I bought a pair of Sealskinz and they leaked from new and although they weren't the winter glove i have never bought another pair. Having said that, i had a pair of their socks which leaked badly but 10 yrs later bought another pair and they have been good.
Surely somebody makes a good winter glove suitable to UK persistently wet conditions. All answers on a postage stamp. Ha

Sometimes it is good to get out whatever the weather. Sounds like you had fun. My waterproof booties are Trekmates or similar. They where cheaper than Sealskins but the have lasted for years and have kept my feet dry despite my boots filling with water a few times.

I wouldn’t say “Fun” would be the word i would use but yes it was good to be out. My feet are fine Dawn. I don’t use trail shoes in the winter, i like dry and warm feet so boots are my choice.
Gloves have always been a problem. I have experimented with all sorts. I have never found a pair i could say are brilliant. Sheila agrees with Martin’s comment about Mal Creasey. take at least 4 pairs. I’m not giving up yet.

Agree - sometimes the flask is more handy than a stove. But quite often I just want to play around with my stoves...

I swear on wool and use woollen mitts when it's cold. The non-superwash wool is best in my opinion (that is, non-machine-washable wool). Woollen mitts (really thick felted ones when it's really cold, thinnes ones when it's just cold) together with the Terra Nova Extremities Tuff Bag over mitts usually keep my hands warm. The only real problem is that the over mitts (even the smallest size available) are generously sized for my hands. But this is anyway the best combination I've found so far.

Thanks Maria,
I have an old pair of Dachstein woolen mitts and a pair of over mitts. I will give the combo a try and see what the results are.
When you consider the materials that put man on the moon you would think that a pair of waterproof,lightweight,breatheable outdoor gloves would be easy to make.

Extremities over mitts with fleece mitts Alan. For winter I also have a pair of Marmot heavy duty gloves which have never really got soaked. Good even in snow.

Thanks dawn, I have a pair of Outdoor Design Gore-tex over mitts and guess what! They leaked and i have spent ages trying to find out where the ingress is.
Don't suppose you have a name of the Marmot's do you?

I've got some Trekmates Dry Snow mitts, which are very warm; they're a glove inside a mitt combination and, so far at least, the water resistance has held out. I originally bought them for my wife, but her preference is still for a liner glove/sheepskin mitt combination, with the sleeves of her waterproof pulled down as far over her hands as possible if it rains hard.

My thumbs still get cold sometimes, wearing the mitts, and they're hopeless with a small pair of binoculars, let alone a compact camera.

Sorry Alan,am not sure of the name of the Marmots. I have had them for several years now. Maybe try Marmot's home page?

Had a quick look at Marmot Alan. The gloves come under their ski and mountaineering gloves. The Randonnee is similar. By the by they where darned expensive when I bought them. Probably a second mortgage jobby these days????? Mind, they are very good for winter conditions.

Thanks Oss, i am getting quite a list to check out.. All the better i may add. I would prioritise warm dry hands than manipulating cameras or binoculars thats for sure.
I have just received a pair of French leather, sheepskin ski gloves which i have applied a waterproofing agent to, so i am just waiting for the next batch of rain to see how they cope.

There’s and old saying Dawn, that if you buy cheap you will buy twice. Unfortunately i fall into the buy cheap too often. Thanks for the info i will take a look.

Going out in poor weather is good fun I think! Maybe I'm odd but there again I can't understand folk who have all the gear but only venture out in good weather. Each to their own though.

We also enjoy going out in poor weather. I mean , that's why we buy protective outdoor gear and expect it to perform. That's how we find out what works and what doesn't and then review it so that others have the benefits. That's why we like freebies. HA

Hope you are on the mend Gibson.

Thanks for asking Alan - I'm pretty well mended which is a relief. Still got to have a decent day on the hills but I'm not expecting a problem.

Hi Alan, interesting note regarding the zip. I have wear Extremities waterproof gloves, various models and always carry a spare pair. They are generally very weatherproof and warm but when it is really lashing down for hours they do get damp, so I swap to a dry pair, particularly if I am on an overnight/away for a couple of days in these conditions.

I wear Extremities gloves I should have typed!!

Hi Mark,
No worries about typo's, i am the worlds worst.
Yes, the zip was a great improvement. Really there is no need to have a two way zip on a smock. It's just asking for trouble.
Extremities are getting strong reviews. Thanks.

Alan, re gloves, I was pottering through E Bay and came across army surplus gloves. A wide range including extreme cold weather gloves. Prices ranging from around seven pounds to fourteen. Thought you may be interested. Worth a look?

Thanks for thinking of me Dawn. Since doing the post i now have 2 options to try out before i make another purchase.
We have a couple of good Army surplus shops in Manchester centre, that i usually check out. When i go into town next i will ask what they have.
I liked those Dutch Mitts on ebay and the prices are very reasonable too. Cheers.
Sheila has just bought a nice pair of OR Arete gloves off ebay, new for £27. I'm envious. The mens were £55.