Todays walk (Saturday 8th December).
This was a short walk to see how i was shaping up after a bout of Flu, bedridden flu that is!
I was still taking the Lemsips and still had a bit of a high temperature and overall was still a bit shaky.

The day was crisp, icy in parts with blue skies and not a breeze. We didn’t have a plan and as we would be walking south of Hartington on the Sunday decided to walk north of the village today. The route north is not a route i had done before so there was lots of map reading to do and the occasional compass bearing.

Looking at the map i decided that going up the escarpment towards Sheen would be a good test and it was in that direction we set off. 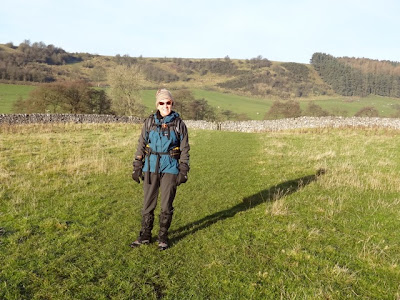 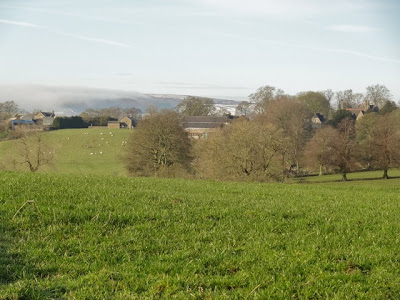 The route leaves Hartington on the lane behind the Charles Cotton Hotel and then turns north before the cheese factory. Then heads for the footbridge across the River Dove crossing a number of stiles along the way. Once across the Dove the path heads west to the top of the escarpment from where a number of paths join giving  the walk a number of route choices. 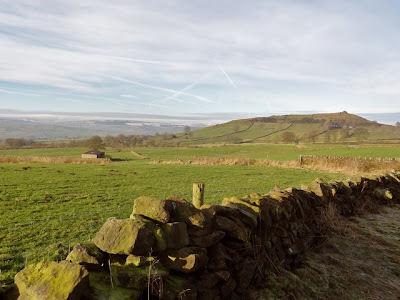 We chose the route north passing through a mixed woodland where we found quite a few Chanterelle mushrooms. We didn’t pick any. Alway’s in view was Sheen Hill.
Sheen is an ancient settlement with a number of Stone Age barrows. There was a settlement here in the 11th Century and most likely Sheen in ancient times meant “shelter”. 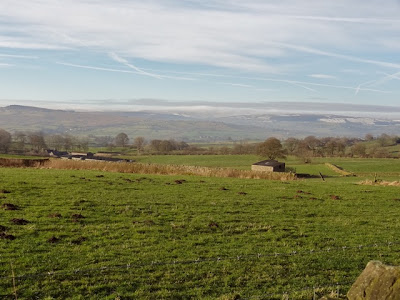 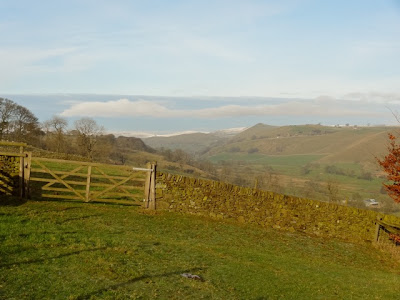 The day was warming up nicely and although i had struggled with my breathing on the up hill stretch it was a delight to be out. The views all round are wonderful. 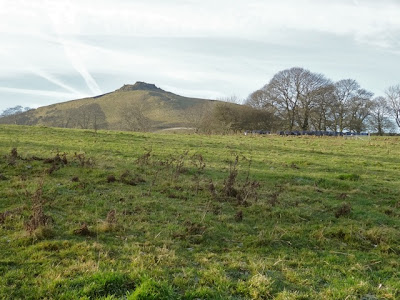 Sheen Hill looking from the east. 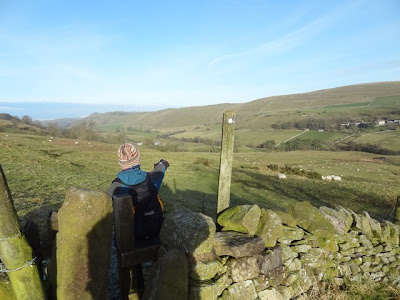 Chief navigator pointing out the obvious route.
We made our way, with no rush across to Harris Close where we joined the minor road for a short distance until the footpath marker directed us on a diverted route around some new stabling at High Close Farm. The owners have made a lovely job of the improvements.
From the farm the path drops steeps down to a footbridge back over the Dove to the hamlet of Pilsbury. It’s said you need a lot of “dough” to live here.
At the junction with the minor road just in front of the hamlet i checked the map and seeing that we were so close to the Motte and Bailey castle decided to go and have a look at the earthwork. 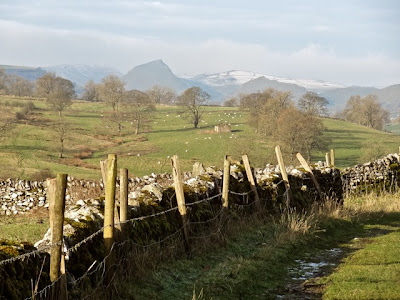 On route the valley opens up giving grand views of Chrome and the Parkhouse Hills. Another day definitely. 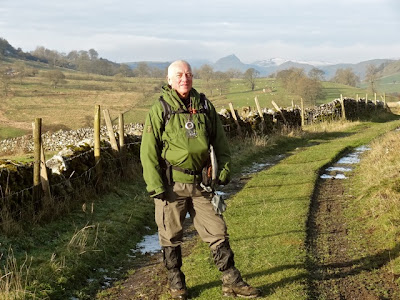 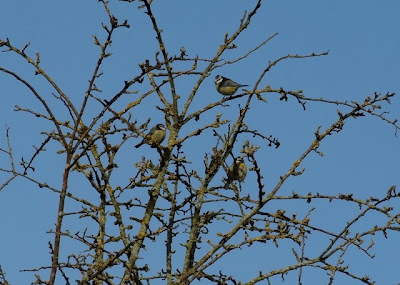 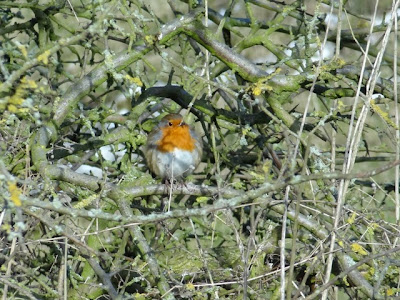 Our feathered friends posed quite willingly without fear. I think they must get well fed by the residents of Pilsbury. 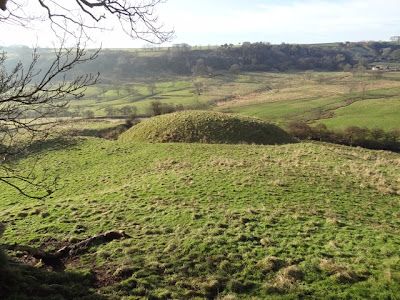 Pilsbury Motte and Bailey castle which dates from the 11th Century. 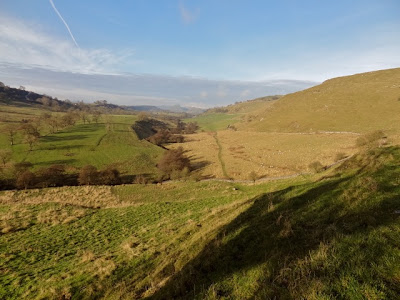 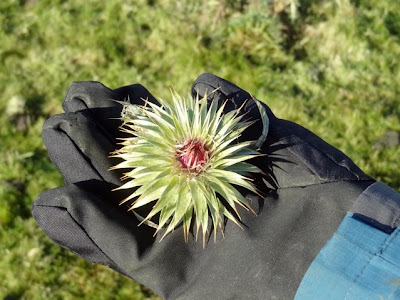 Anyone name the flower? No prizes. 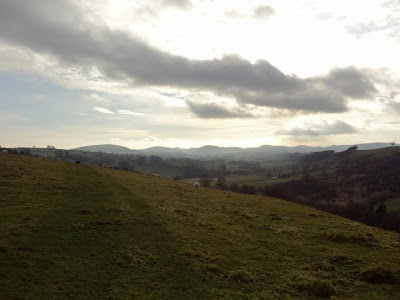 The light was just starting to fade as we approached Hartington from above Bank Top Farm. 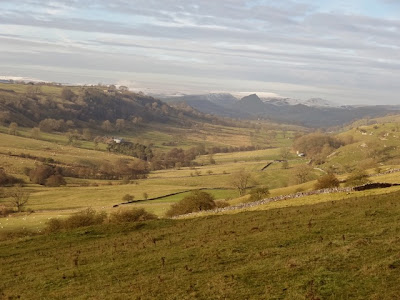 Another view of the whole valley 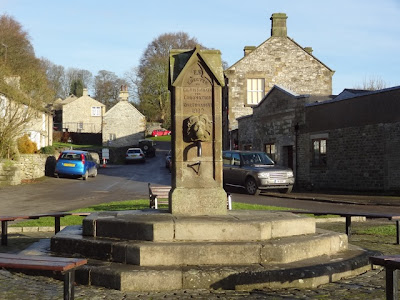 The water pump in Hartington Village where we found the general store, bought a couple of Huntsman pies and sat out the remaining light.

What a superb day and a beautiful walk. Not particularly long but so scenic. We will be back to walk some more here.

What a lovely day. So sunny. And it's so green there - over here it's just white, or maybe grey. Everything seems to be either hibernating or dead. I'm already looking forward to the spring.

Hi Maria,
This was one of the nicest walking days in 2012. It is very green. The little snow we have had has now gone except on the high mountain tops. Things must be quite hard for the small animals at the moment, we had a Weasel and a Jay in the garden looking for food. We don't usually get them in the garden.

That was a nice little stroll Alan, I'm glad it sorted you out for Sunday.

I know you said that i didn't seem to show i was rough, on Sunday. On Saturday lunch time, i wasn't sure, i was very hot and lacked energy. But i felt ok on Sunday morning. It would probably have been a different story if there had been a few up's.
That was indeed a nice stroll. Not like the Glyders though.

Love how Chrome and Parkhouse hills appear to be so mountainous amidst the rolling farmland. Was up there recently.

Yes they do. My thought exactly. I've never been up Chrome myself.