For the last week flu has taken over me. I missed a walk with JJ and Rick on a lovely sunny Wednesday and i was doubtful for this weekends Christmas walk, which Martin organises and which we had booked an overnight stop as long ago as last February.
If we didn't go we would still have to pay the hotel.
I emailed Martin, just to let him know that i was still going and even if i wasn't up for the walk, i would still meet for lunch. I hate letting people down.

So, Sheila and i did a walk on Saturday as a kind of "am i up to Sunday”, and i did struggle on even the slightest gradient. My breathing was a mess and the sweat was profuse. Fortunately the pace was of our own making and numerous coffee breaks were taken. I will do a separate post on this walk, next.

The Sunday group walk is easy walking with little gradient and the actual walking only takes about 4 hrs. After a couple of whisky's on Saturday night i decided that i would do the walk. I really didn't want to miss it.
8 o'clock Sunday morning, it's raining, that fine stuff that wets you through. We breakfasted, paid the bill and headed off to meet the 28 souls at a lay-bye on the A515. It was only half light as we pulled in to find the attendance already busy, with about a dozen cars neatly lined up.

I switched off the car and watched the world disappear into a watery grey. I wasn't looking forward to getting out and putting on gaiters, overtrousers, boots etc etc. Gradually as 10.00 am approached, other bodies apeared from the sanctuary of the vehicles, so we did likewise.
Hello’s done, we set off. First crossing the busy A515 and onto the the Tissington Trail, the old railway line. It was too damp at this point so i didn’t get a photograph of the trail. The rain eased thankfully as we turned off the trail and steeply down to the River Dove. This path is remembered fondly due to the fact that your boots weigh about a kilo more each, with the sticky mud that gets attached by the time you reach the river. 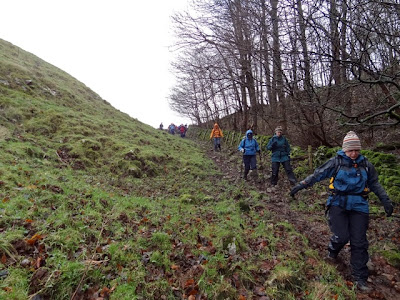 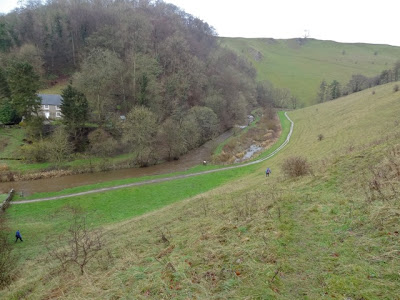 The Dove, was high, fast and full of silt washed off the fell sides. A bit of a gap had been created on the downhill as folk picked there way cautiously to the river path.
There was more mud to come. 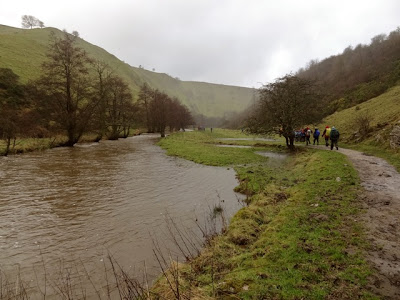 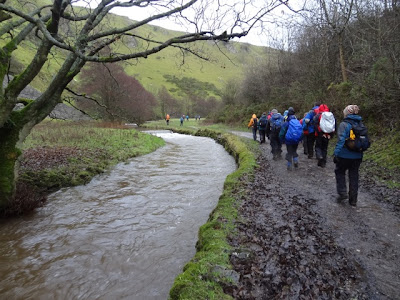 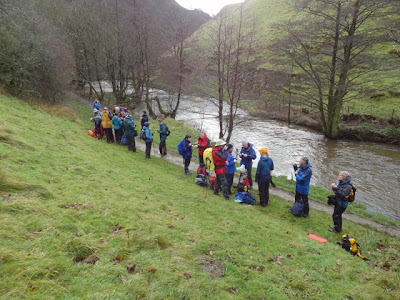 Elevenses, showing how wet the area was, no one sitting down.
Martin and Sue distributed delicious Caramel and Chocolate shortbread with ginger and Fudge Brownies. Yummy. I resisted the temptation to try seconds as lunch was not too far away. 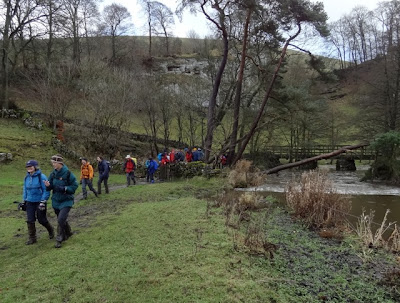 Most of the walk consisted of chatting. Walks planned, the TGO challenge obviously, gear, illness etc etc. Martin introduced Jeff to Sheila and I. This is your blog stalker was the introduction. We hadn’t met Jeff before although i knew of him through his excellent and numerous gear sales on OutdoorsMagic. Good to meet you Jeff and i liked your Canon Camera. 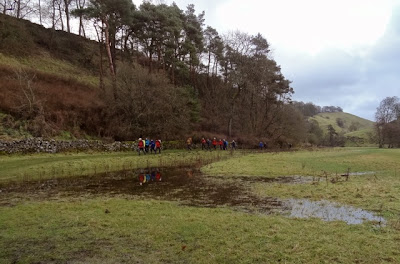 Onward through the extended river bed. 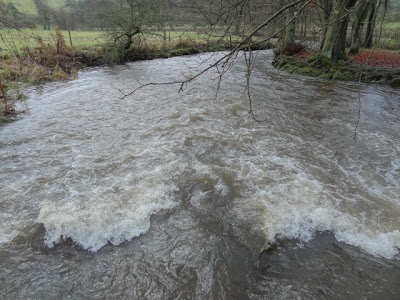 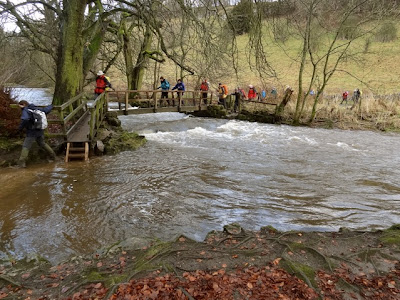 The river and bridge crossing at Beresford Dale. 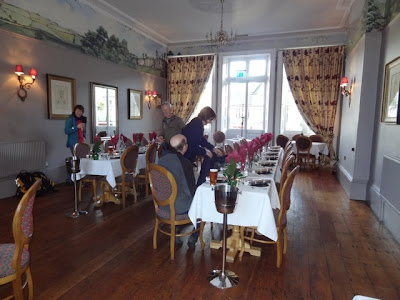 The dinning room at the Charles Cotton Hotel.
The rain that had been intermittent during the walk thankfully had stopped by the time we reached the Charles Cotton Hotel for Christmas Lunch. In fact some blue ski had appeared and we actually saw the sun, be it briefly.
The Charles Cotton looked after us wonderfully well and nothing was too much trouble for the staff. The dinner, 2 or 3 courses as you wished was beautiful and plentiful. Then tea/coffee served with mince pies. Time moves fast when you are having fun. We did a quiz which Martin had prepared and although there was some cheating going on from some quarters Sheila and I came runners up behind Mick and Gayle. We did have a bit of help from Jeff as well.
Thanks to Alan,Judy and the staff at the Charles Cotton for making it a lunch to remember.

We were not being rushed in any way but we had to get moving as daylight was going. It’s never nice getting back into wet gear after a couple of hours in the warm. But that’s the fun of it. 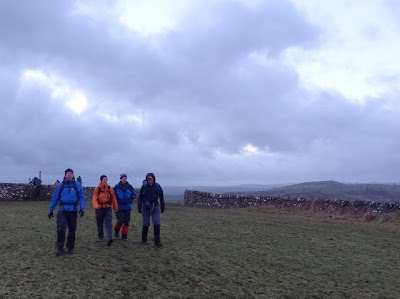 Mick, Gayle, Graham and Martin on our route to Biggin 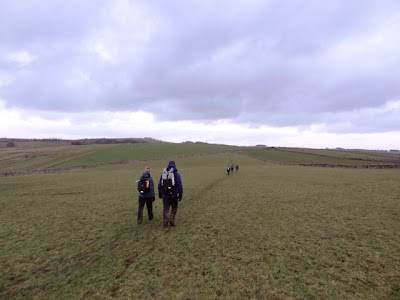 Sheila and Jeff with his GG Gorilla pack.

Quite a pace was achieved during the last 4.5 miles of the route, probably because the sky was getting darker by the minute. Last year the weather was worse on the return leg and we finished walking in snow showers. This time it was relatively calm and pleasant.

Once we hit the Tissington trail again, the pace quickened even more on the good surface and before long we were back at the car just as darkness took over. It was so dark it was difficult to see who was who as we bid our farewells and said our thank you’s for a good day out. Considering how bad i had been during the week and how slow i had walked yesterday, i was pleased that i still felt good at the end.

Thanks everyone for your company and to Martin and Sue for the Organisation. I think there were other bloggers in attendance too which we didn’t manage to speak with. If that was the case then we must apologise and make more effort next year.
Looking forward to next year already.

Good you recovered in time. Regarding the whiskeys on Saturday night: we have a proverb in Finnish which says that if spirits, tar and sauna do not cure the illness then it's going to kill you. It seems that the couple of whiskeys cured you this time! :)


Hi Maria,
i think i will have to keep drinking the awful stuff to be quite sure i am better. Ha.
That’s a good proverb.

That is impressive Alan. Hope you are on the mend soon.

Thanks very much Dawn. I feel fine now. I just need to ease myself back into it without loosing too much core body heat.

Hi Alan - if you were ill, you didn't show it, other than in your recollection of names. I think you'll find that 'Graham' is in fact Jeff, and as there was no 'Mike' in the party, he is probably one of the many Grahams!
Still working on my report - I got distracted (what's new!).
Thanks for coming, and don't eat your prizes all at once!

Ooops. That's the thing when you meet so many folks you don't know. Allow me to start again. Sorry Jeff. That has now been rectified. The chap i thought was Mike was sat next to Jeff at lunch. Does that help to ID. Sorry 'erm? Did i get Mick and Gayle right? No wonder i couldn't remember which church was in the quiz. I blame it on the Paracetamol and whisky.

This strain of 'flu is known to last well beyond Christmas Alan, sometimes well into the New Year. I'd stock up with some nice malts. Come to think of it, I'm not feeling too great myself....

I'm glad you understand my predicament Gibson. I did try quite a few different one's over the weekend to try and find a favorite. I'm afraid the whole thing was a failure and will have to be repeated. And then there's my memory problem, which may result in me forgetting which one was my fav.
Now, where was I?

It was good to meet both you and Sheila and despite the muddy conditions,I thoroughly enjoyed the walk.
The chap sitting to my right was I think named Graham-never met him before but he certainly seemed to have a good appetite!
Anyway,hope that our paths will cross sometime again in the future.
Have a great Xmas Jeff
PS If Martin Rye is reading this report he will no doubt recognise his old GG Gorilla in the photo-it has gone to a good home!

Hi Jeff,
Glad we sorted that out.
Yes, good to put a face to the comments.
We thoroughly enjoyed it and considering we loath pub quiz’s, nobody was more surprised than us to come 2nd.
Have a good Christmas. Hope Sky is sorted and see you next year if not before.

My earlier comment now reads rather strangely following correction of the names...
So did the Paracetamol and whisky give you a psychic boost enabling you to get a bonus point to push into that second place? And are you inferring that Mick and Gayle were cheating? If so their prize may need to be withdrawn. A stomach pump may be required. Pain may be involved!

Martin, Now you wouldn't expect me to grass on fellow participants would you. We did Google the name of the church. But it wouldn't have made any difference to the result. Would you like a slice of chocy back.
I think the paracetamol kept me going. It couldn't have been the whisky.

Parts of that walk look a tad familiar... especially the muddy/marshy bits :-)

Did you clamber up to the cave for a look-see?

Hi Stef,
Yes i remember your stay in Hartington.
No it wasn’t on Martin’s agenda to visit the cave. I believe the venue might change next year so if we are to visit the cave we will have to do it ourselves.
It was indeed muddy and took me about 1/2hr at home to clean it off the boots. Glad we wasn’t wearing trail shoes though.