At 5.00am the sun was rising and the warmth in my sleeping bag was becoming a little unbearable. It had been a clear night and a bit of a chilly one. Plenty of condensation in and on the tent.
I had slept with the tent doors wide open, the sky was looking good for a couple of photo’s. I was still tired and didn’t get out of the tent but took the sunrise shots.
Just sticking my head out and looking around, the site was all quiet with dew sparkling on the grass.
I think the rest missed the Dawn. 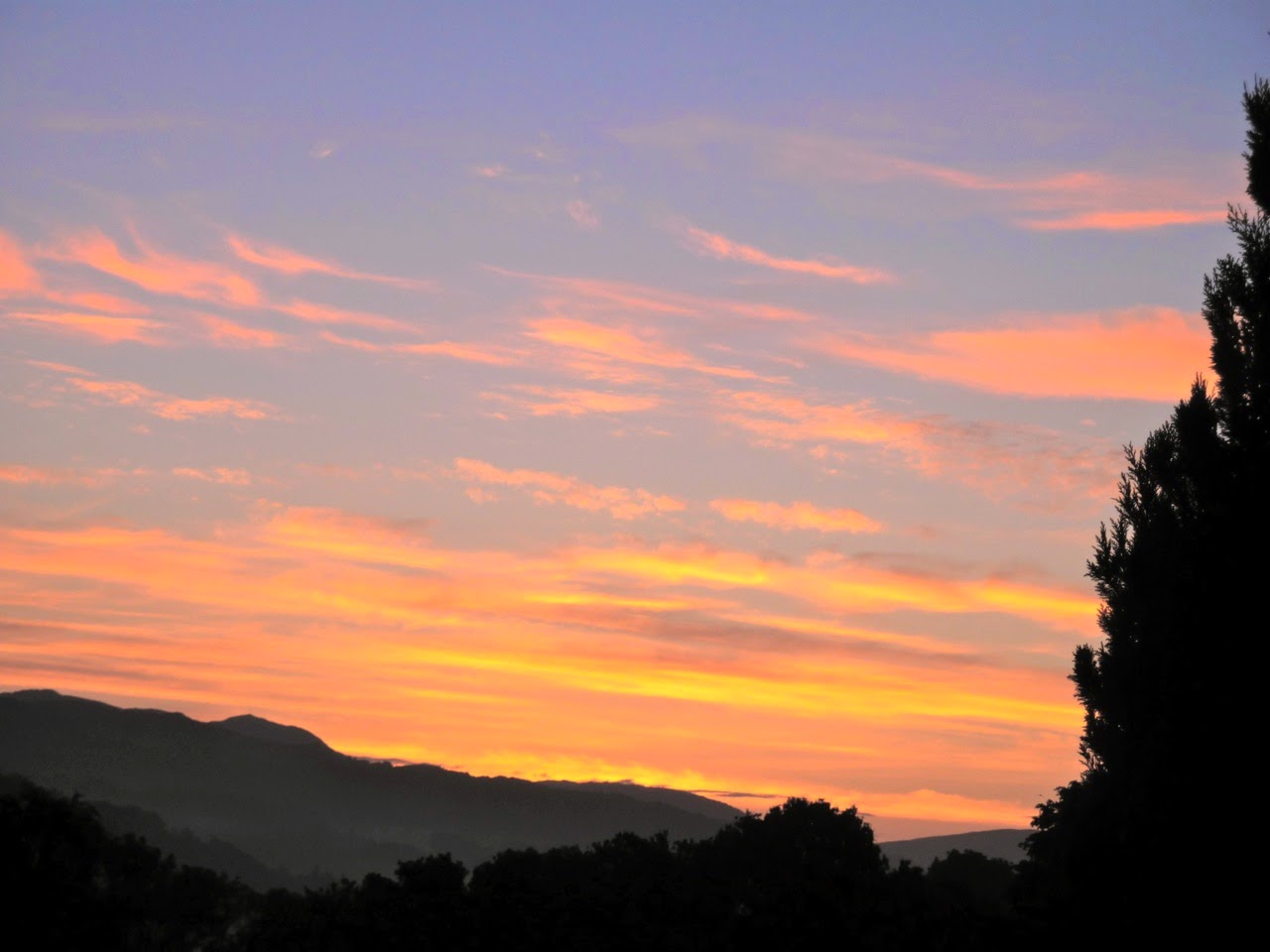 Sunrise from my tent in Dolgellau.

7.00am and i was up and before breakfast tried to soak as much condensation as i could from the fabric so that the sun could do it's job of drying the tent. Others were stirring whilst i sat on a picnic bench and drank coffee.
It was going to be a warm one and we knew water was going to be a problem once we passed the 400 metre mark. The Cadair ridge is boggy in parts but water courses are very few and probably dry.
Having filled my 2L water bottle and my 350ml bottle i was ready to go. The rucksack was heavy and  i was already dripping with sweat just from packing up.
Leaving the camp site we set off west passed the cemetery and then turned left on a side road signposted Tabor. We followed this very steep road come track to its end near a communications mast. The route follows a river on our right which sounded wonderful as it cascaded down and made us wonder if water was not going to be a problem after all.
Some of the rabble were struggling with the incline, the heat and the additional weight of the water. It was steep though.
Laura wondered what the temperature was and even this early it was 24C in the shade of the trees.

Gaining open ground the path is a little hit and miss as a new gas pipe has recently been laid. It’s quite easy to continue on the right of way and drop down into the next valley, however we needed to stay on high ground and spotted a stile across to the right over a field wall.
It is pleasant walking here and we also found water flowing clean and fast so i took the opportunity to refill my 350ml bottle which was now almost empty. 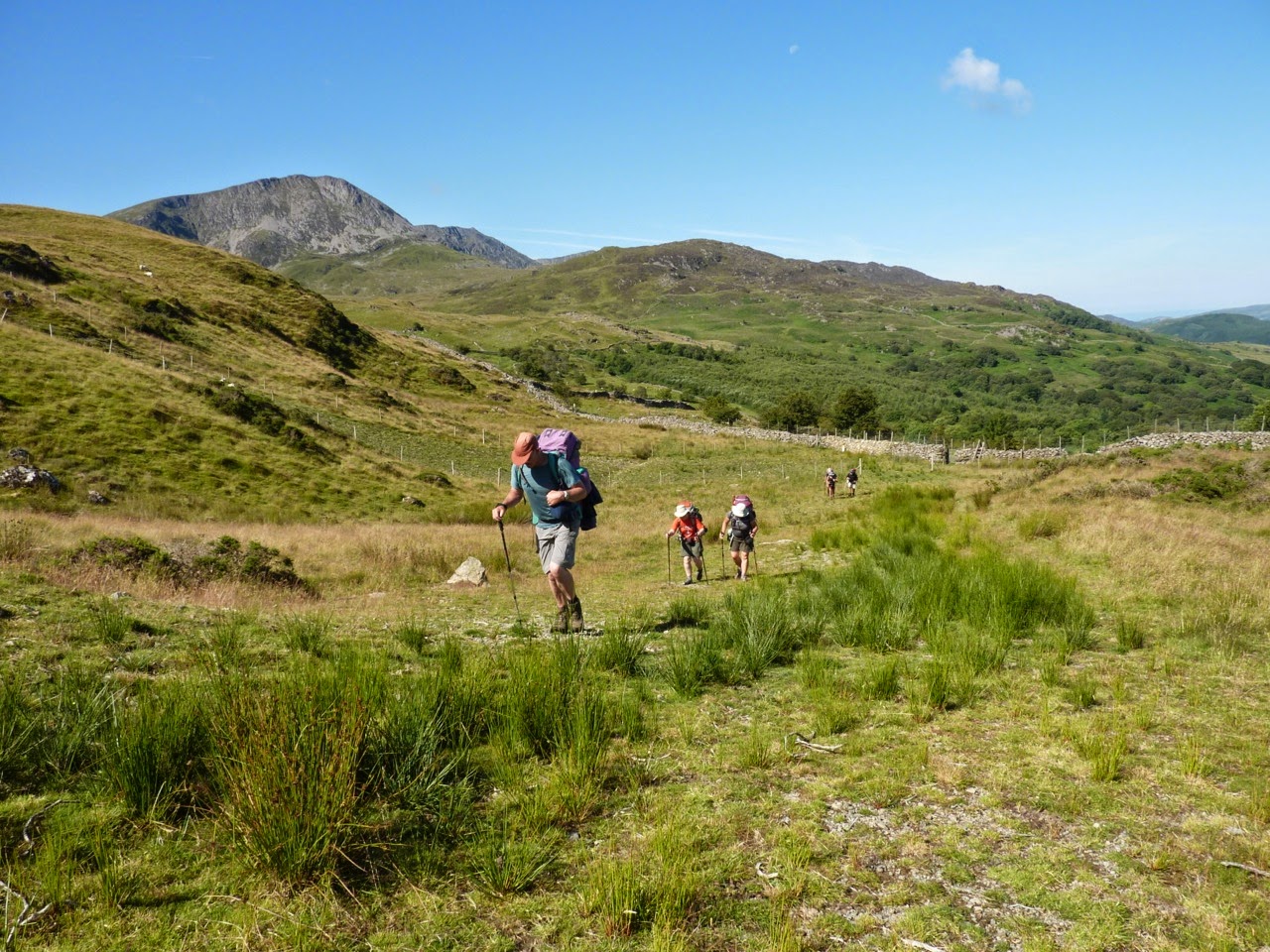 Mynydd Moel (high left) and Pen-Y Gadair at the back.
Once over the stile the obvious path is to go straight on following the contour but our route turned south immediately and followed the wall up, and up, and up. It’s relentless and in the full heat of the sun its energy sapping. When going steep up hill, i find it easier to go at your own pace and keep moving, stopping only to take water and of course jelly babies.

Just before the wall becomes a fence line we re-grouped as our little band was getting quite strung out.
To the right the constant view of the sheer face of Mynydd Moel and Pen-Y Gadair beyond was inspiring and above us and to the left the face of Gau Graig. Here we watched Peregine Falcons gliding and then stooping to speeds that can reach over 200mph.

Following the fence to a stile on the ridge line, we crossed over and dropped the rucksacks. Mike went the extra 100 metres to the cairn on Gau Graig which we did on a previous visit. I wasn’t that bothered about going to the cairn but was surprised no others did as the views are great. 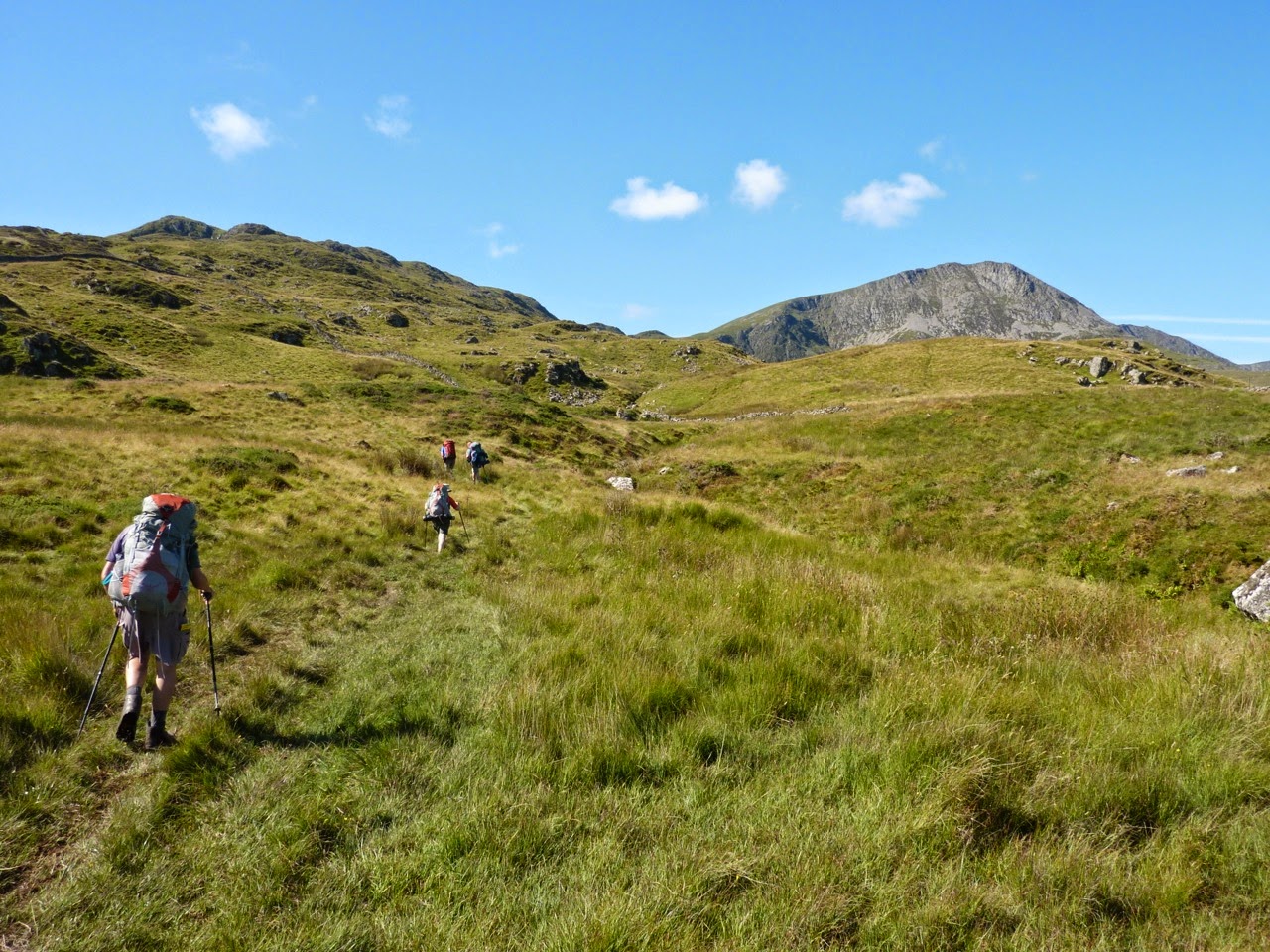 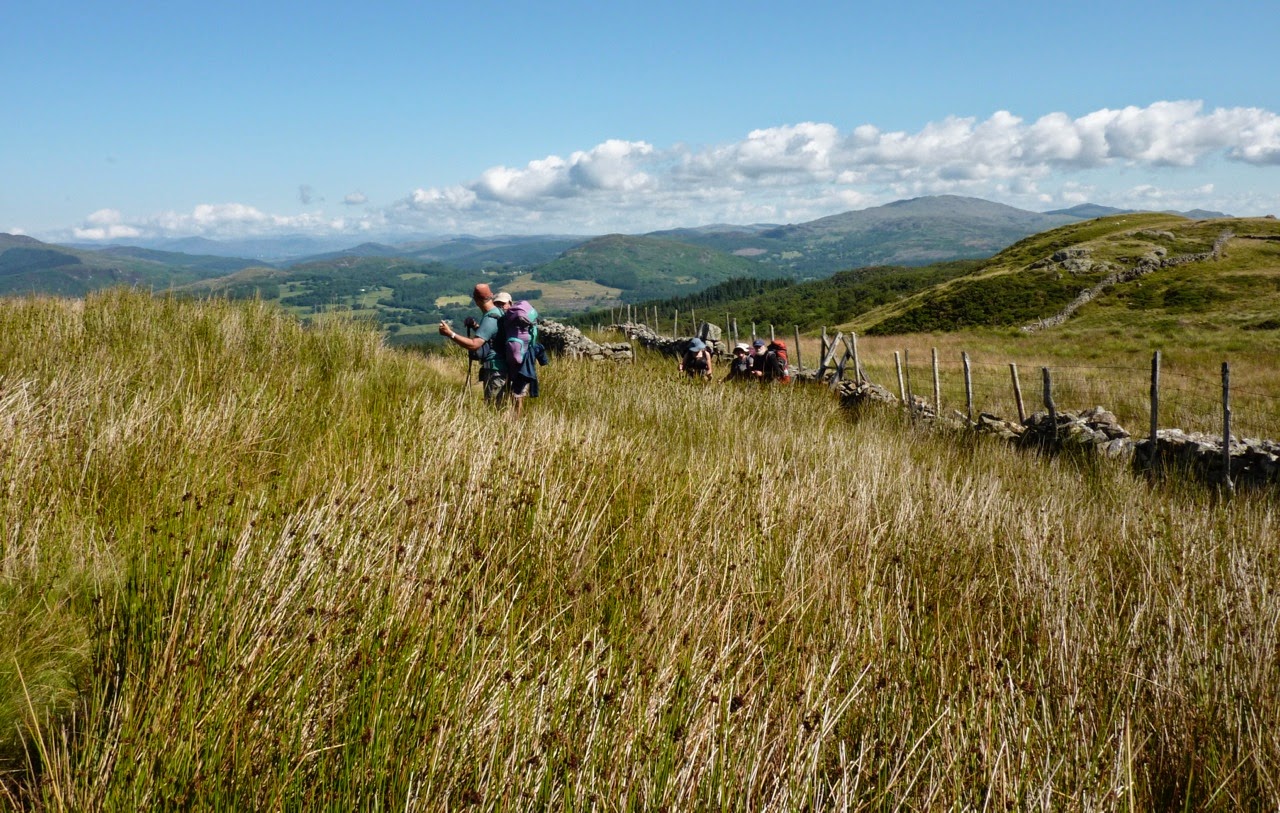 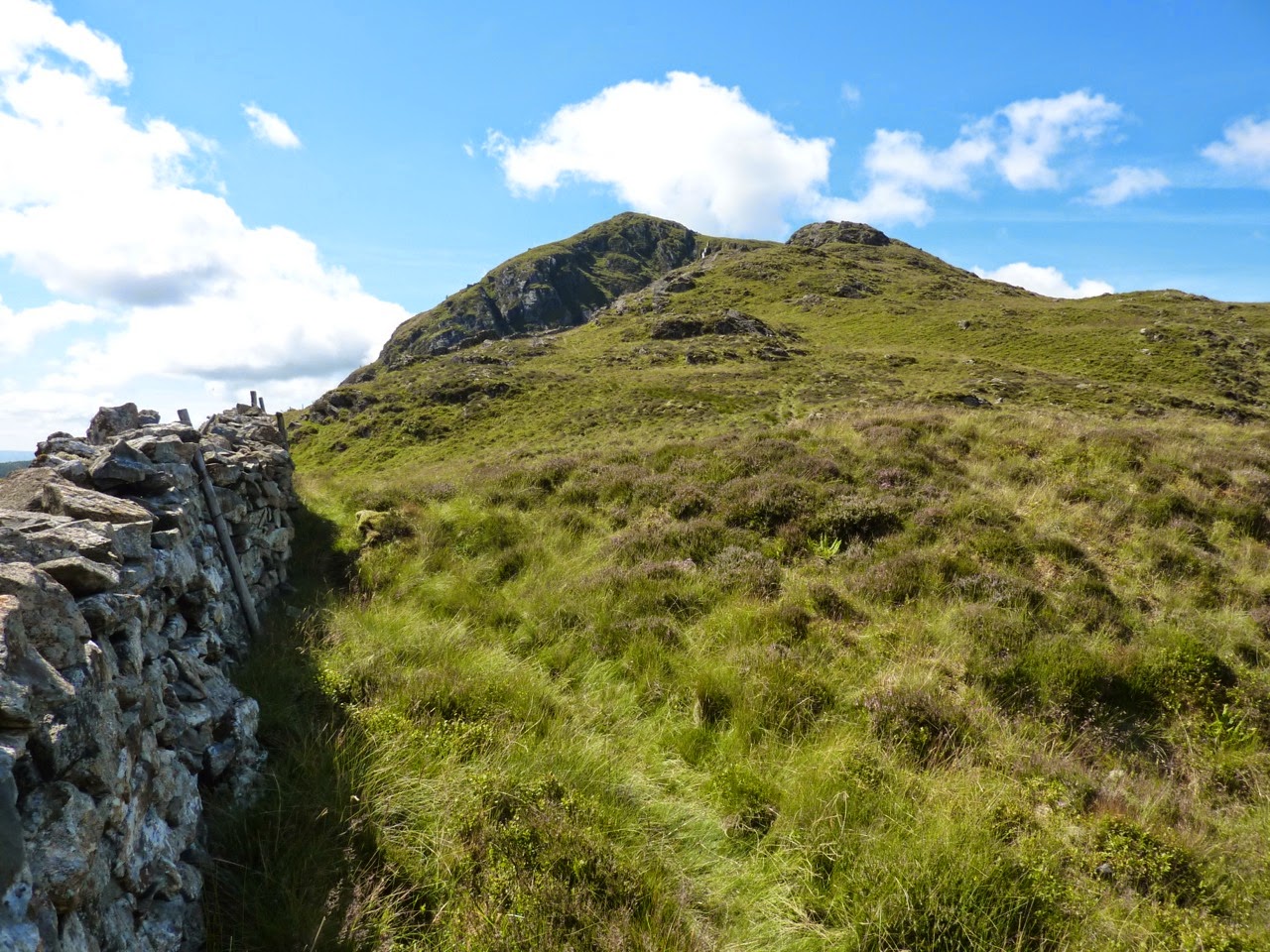 Up and Up to Gau Graig 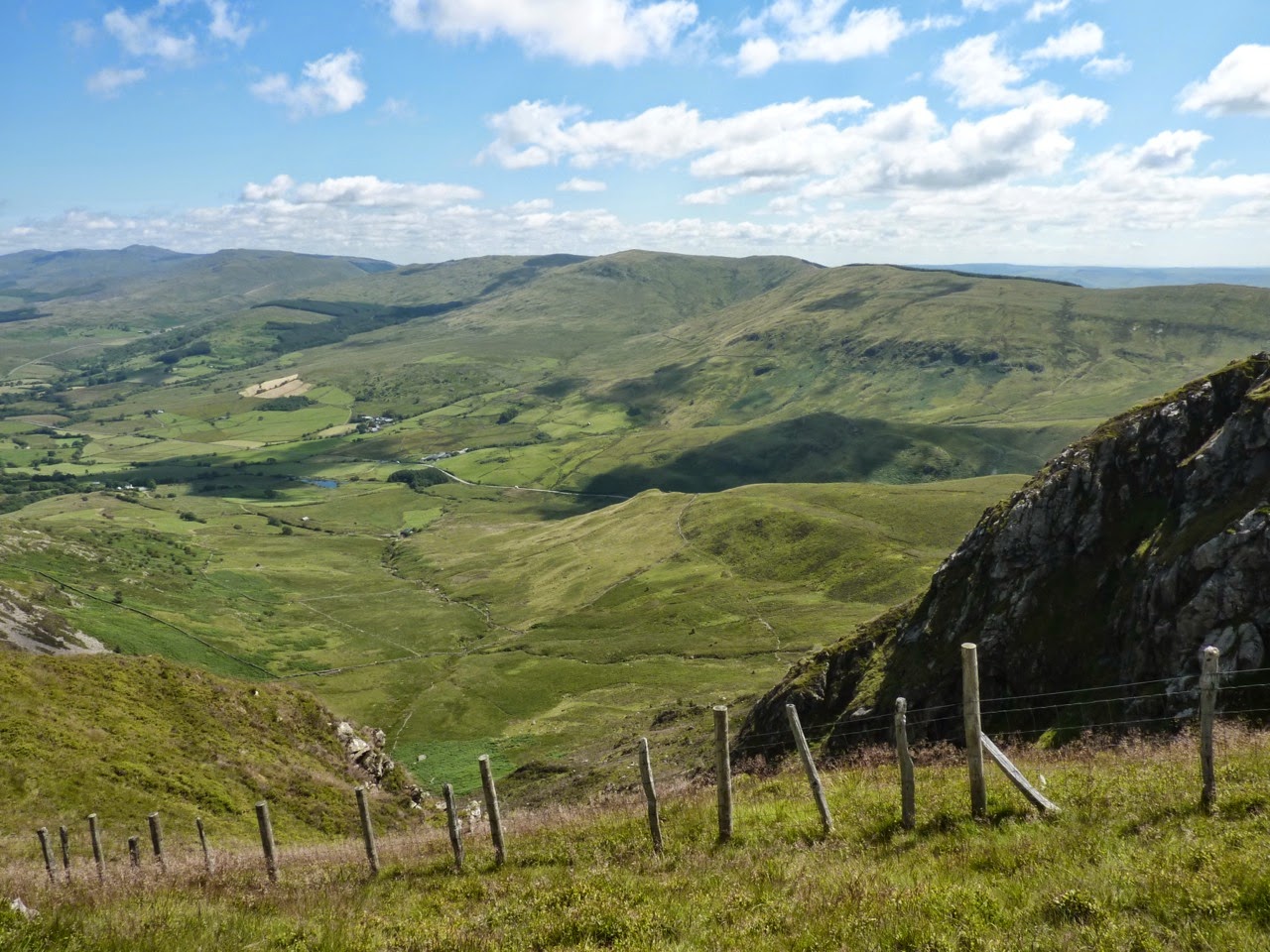 Almost at the ridge line 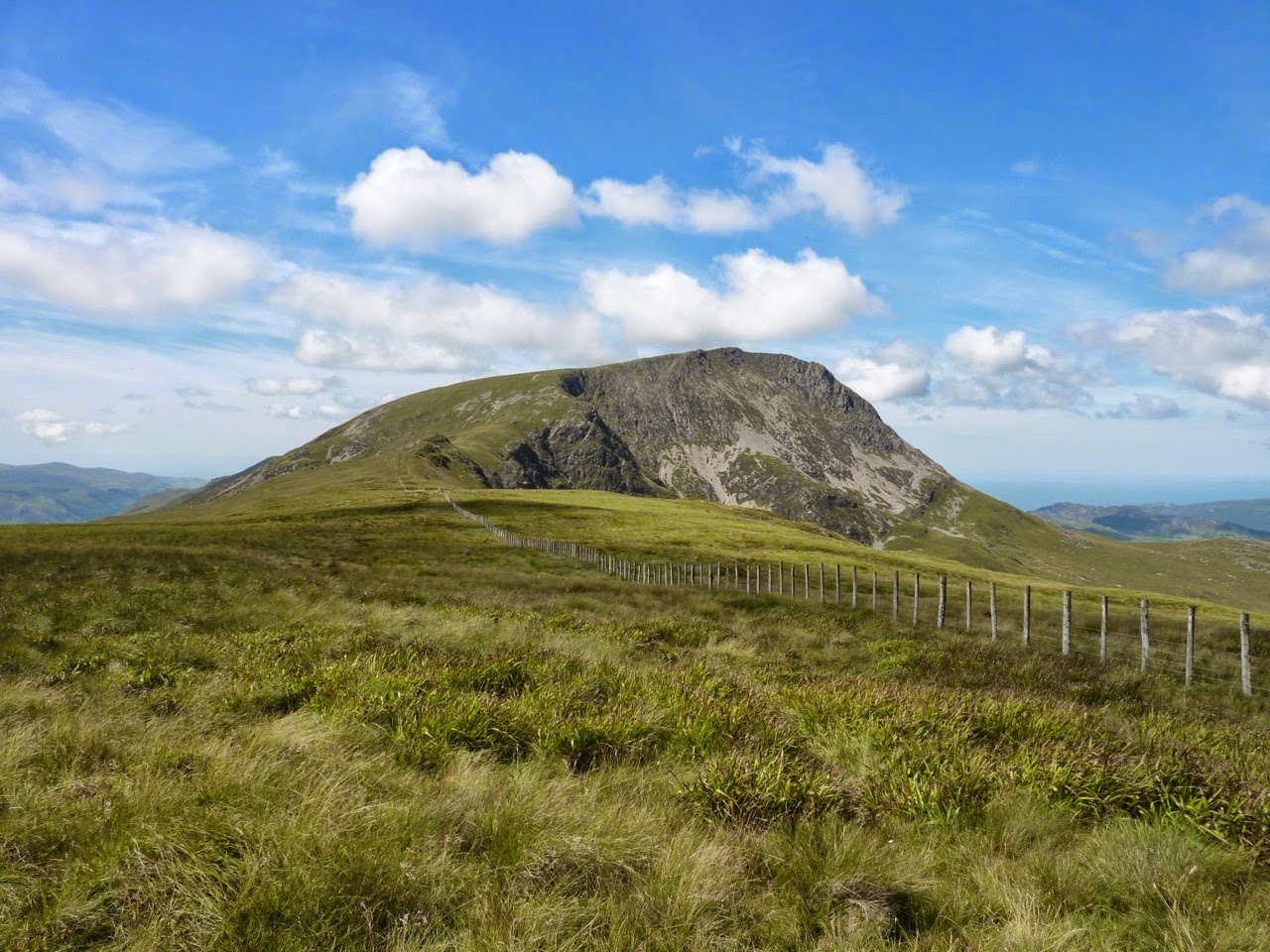 Mynydd Moel
A couple crossed the wobbly stile coming from Gau Graig and the chap fell off badly skinning his shin and cutting a finger. First aid was deployed by the rabble and on they went.

Once ready off we set again with the prospect that we could see how steep it was to gain the summit of Mynydd Moel. Getting to the end of the ridge fence it was another “Go For It” moment. A continuous lung busting pull where you just had to go at your own pace.
Mynydd Moel is a superb summit with a wind break and sheer cliffs to the northern edge. There is also a narrow but flat precipitous path which leads to the edge and into the void.
It was a lovely day but carrying rucksacks laden with water takes it toll. We dropped sacks again and took time to dry out the sweat from our clothes.

Pen-Y-Gadair which is the summit of Cadair Idris containing the trig point could be seen high to our west and was our next target. Although another “up”, it was not quite as steep until you get to the last section. I skirted the edge of the northern crags gazing down the precipitous sides to view the attractive blue waters of Llyn Gafr, Llyn y Gadair and the Fox path away to the east.
Here we watched a couple of shepherds gathering sheep for a while as we sat atop our highest point of the trip at 893 metres. The trig point area was busy, so busy i only just managed to touch it. Lots of red faced day walkers with no gear at all had made the summit. I wondered if we looked as knackered as them. 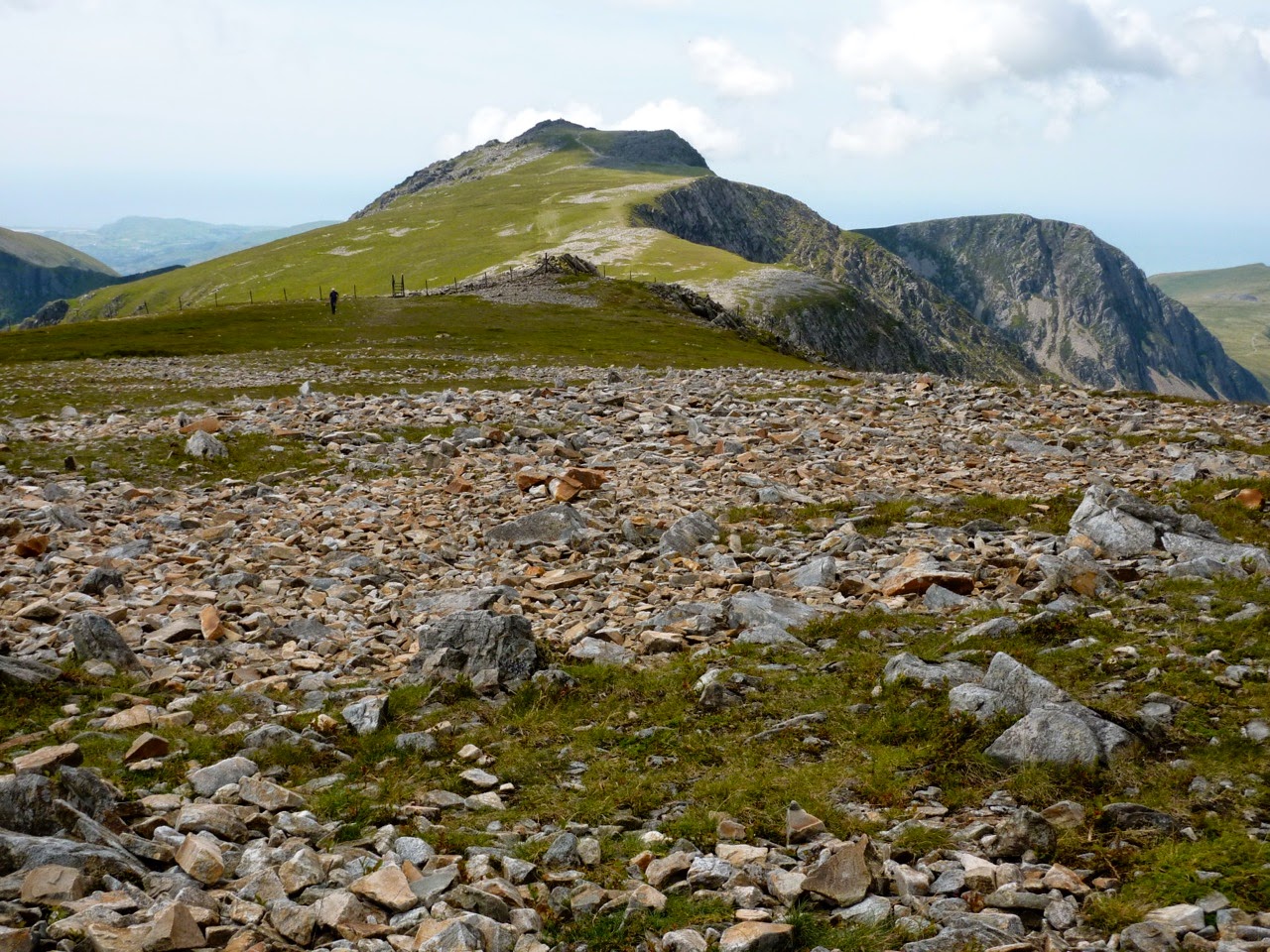 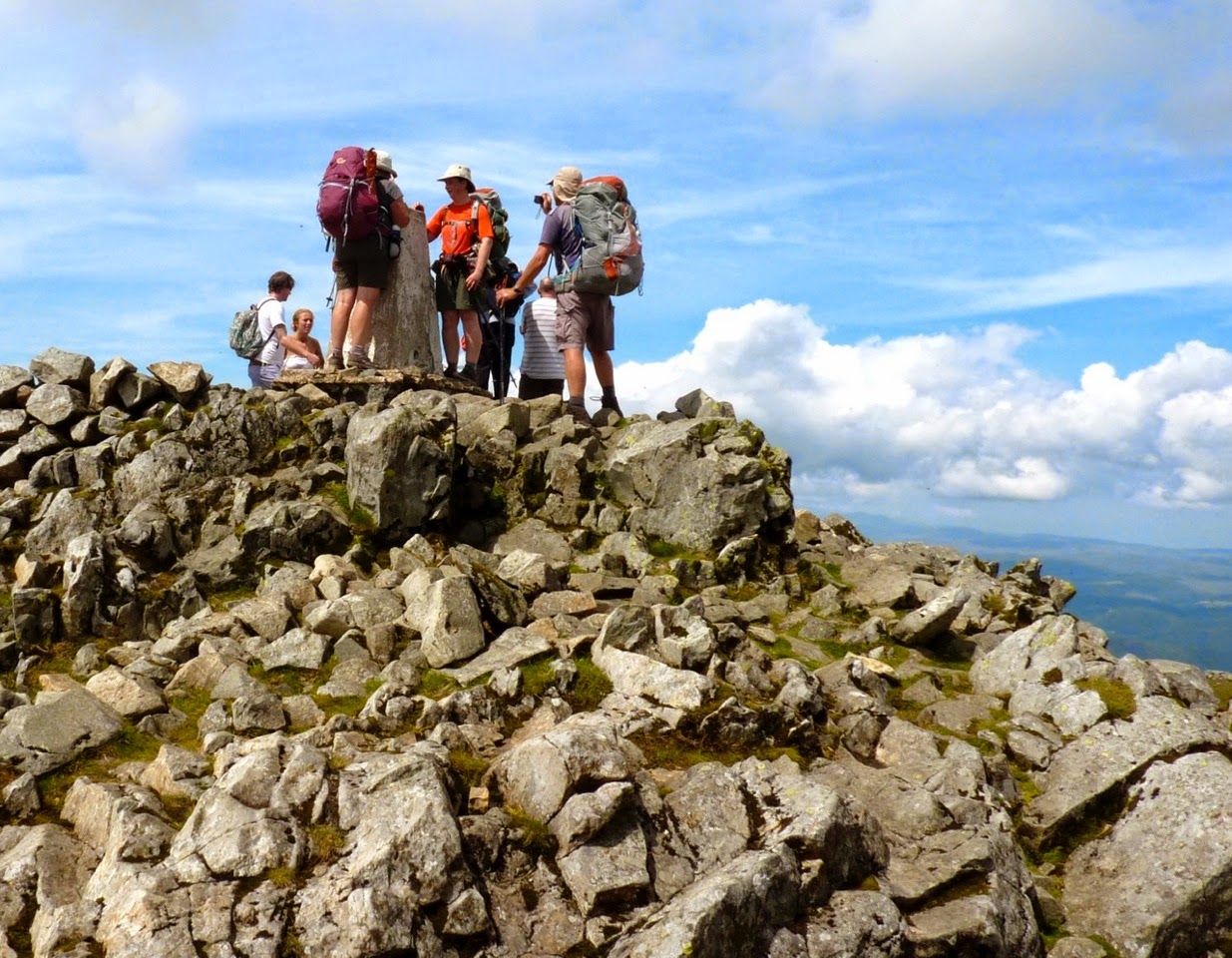 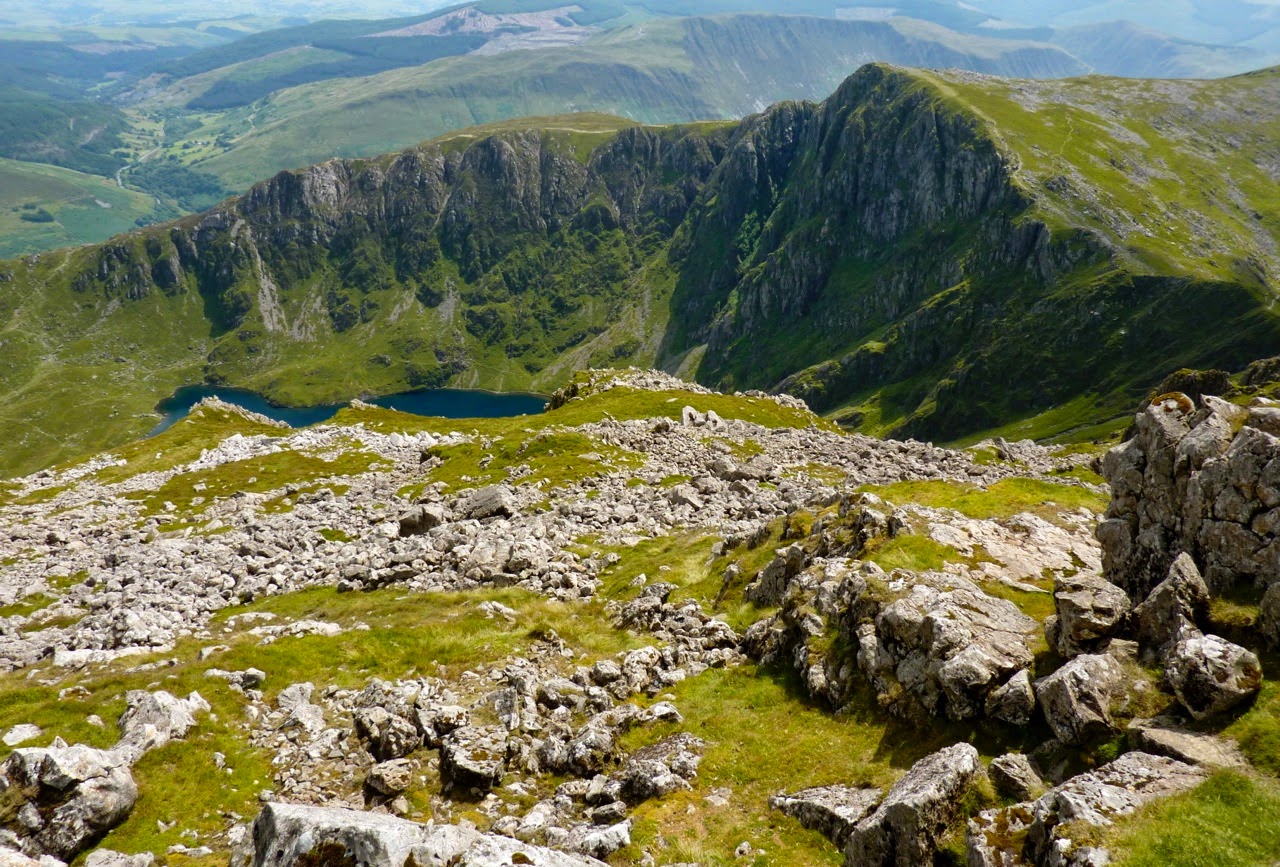 View of Craig Cau and Llyn Cau from the summit. 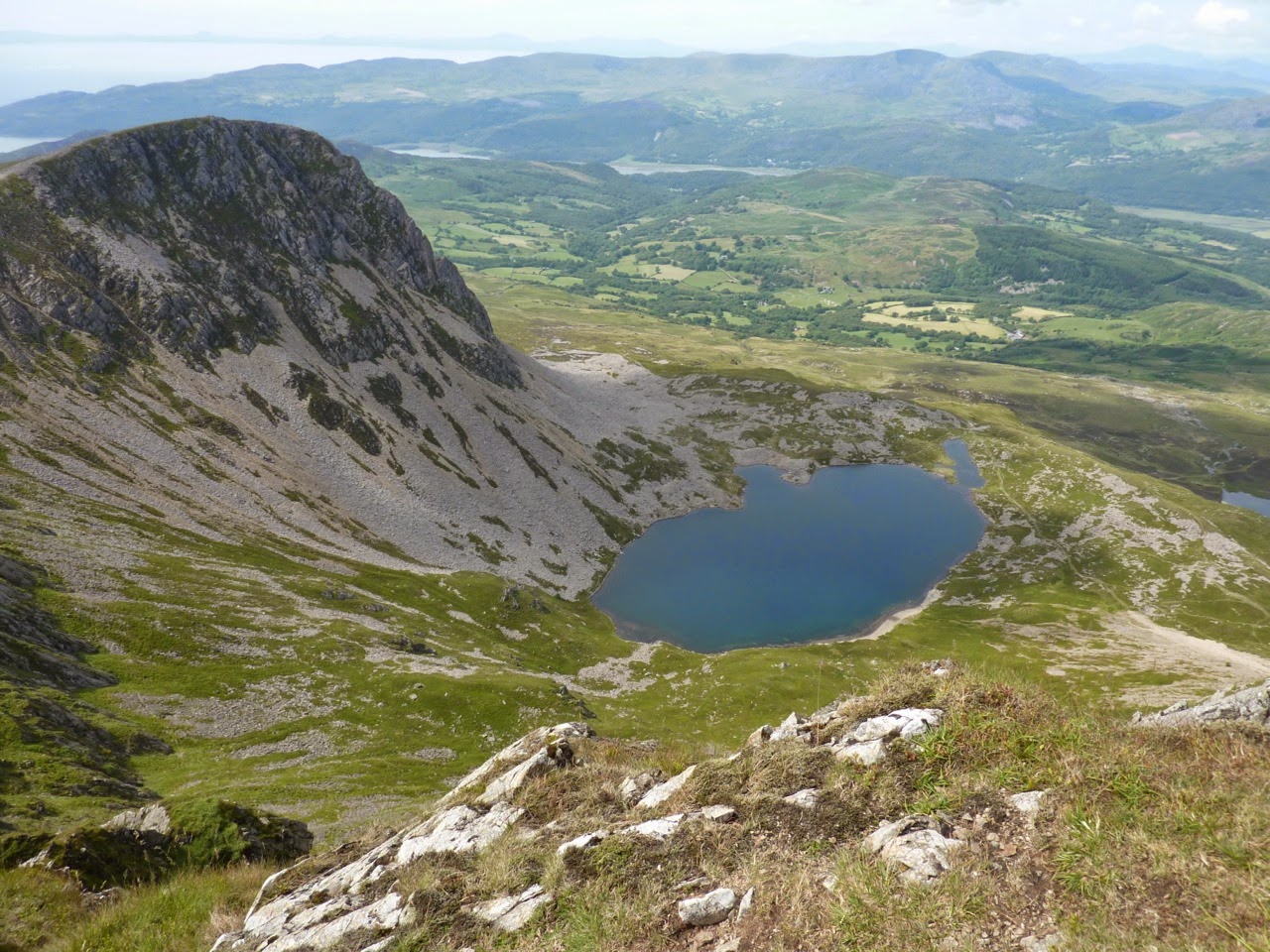 View of The saddle and Llyn Y Gadair from just west of the summit
The rough plan was to pitch high tonight but the saying goes that if you spend the night on Cadair Idris you will leave in the morning either a Poet or a Madman. The very summit is a rocky exposed top and waterless, not a place to pitch a tent. It has fantastic views of Craig Cau and Llyn Cau.

We headed west following the ridge line and along the old pony track below The Saddle. Again the problem was water. We had hoped to find a running stream but alas, nothing. Richard eventually found a small spring which after clearing out a few small rocks we were able to get a cup into the pool. The water was crystal clear and very cold and was christened survival spring, all very dramatic but appropriate at the time. It was roughly at grid ref. SH695132 but that is without any great accuracy. 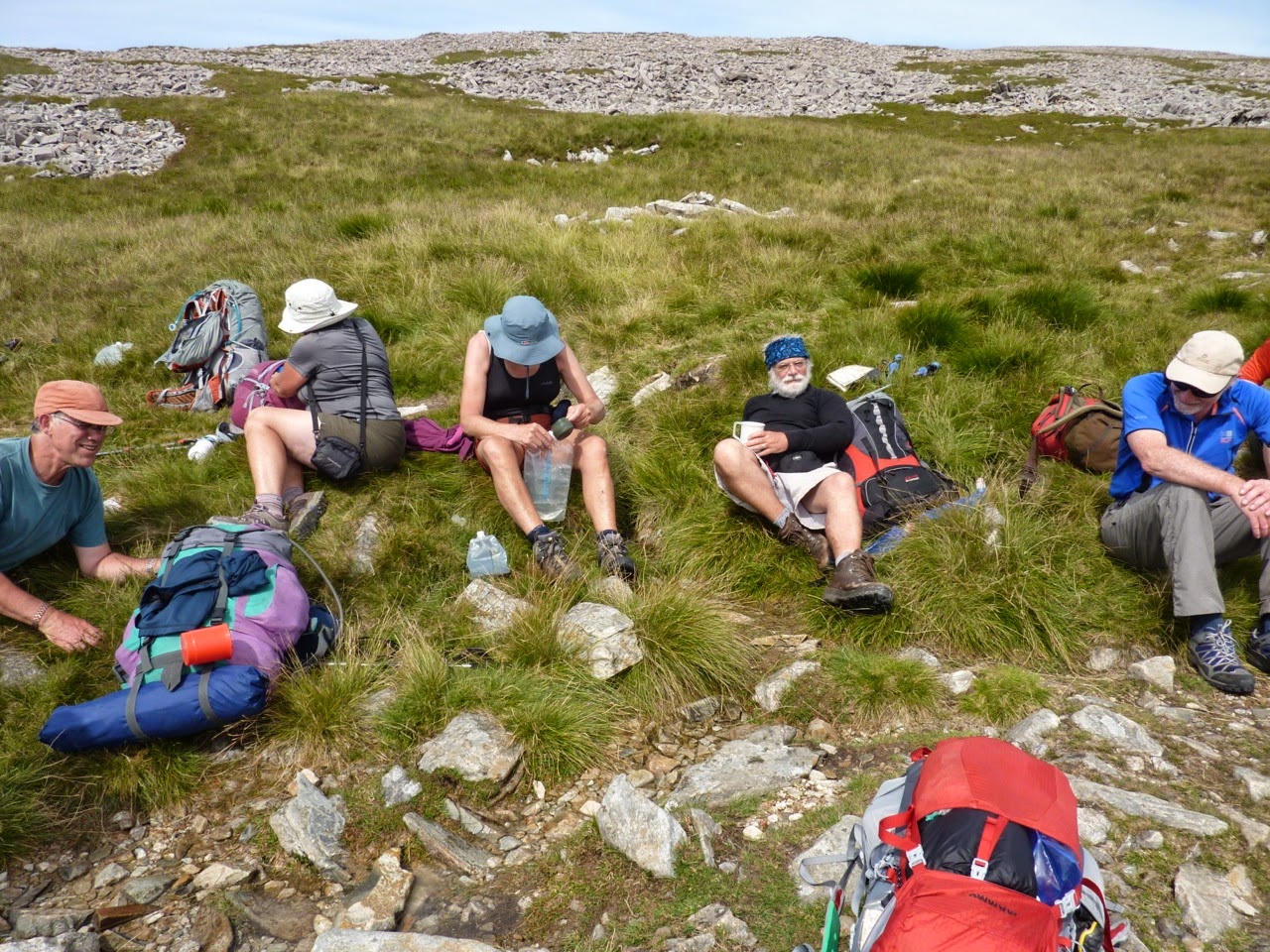 Survival Spring
With bottles replenished it was now just a matter of finding a flat-ish spot to pitch tents. There was a suggestion that the old workings on Carnedd Lwyd may provide some flat sites but a suitable spot was found at the watershed. GR 69081357. The consensus was that the site was ok and we quickly pitched and got a brew going.
After a scout around no other drinking water was discovered. So what we had needed to last us.
Mike inadvertently knocked his stove over with a brew on the go and so was not happy. Squeezing out hand fulls of sphagnum moss he managed to filter enough for a brew.

We had a pleasant evening with sharing whisky and sloe gin doing the rounds. We watched the sunset like Druids at a solstice. The weather forecast was not good however and Friday would bring electrical storms. We also heard of the dreadful shooting down of the Malaysian aircraft. What a dreadful world we live in and how bad is humanity.

We watched the last of the sun and then noticed behind us the swirling clouds above The Saddle. Like something you would see on Lord of the Rings. I was 9.30pm and bed was calling. Some had already turned in. 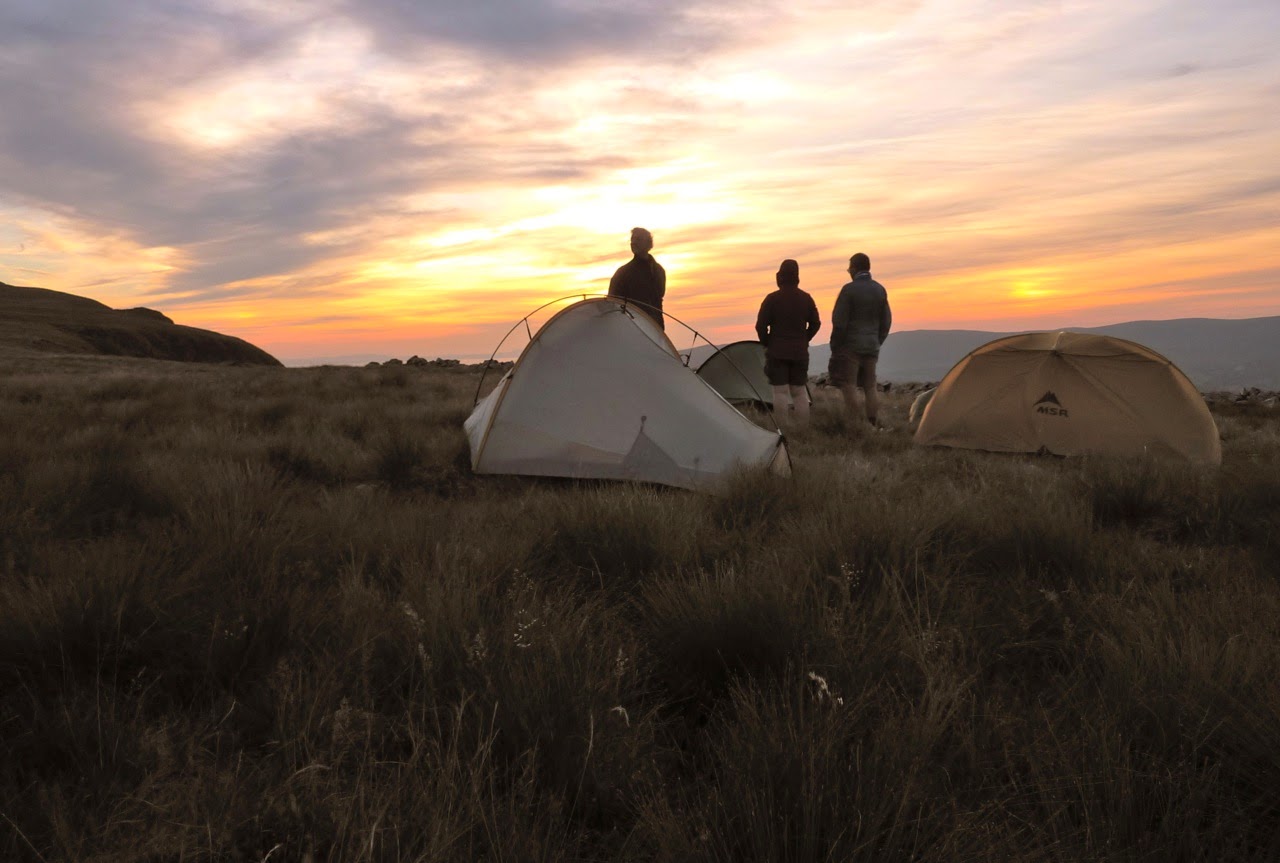 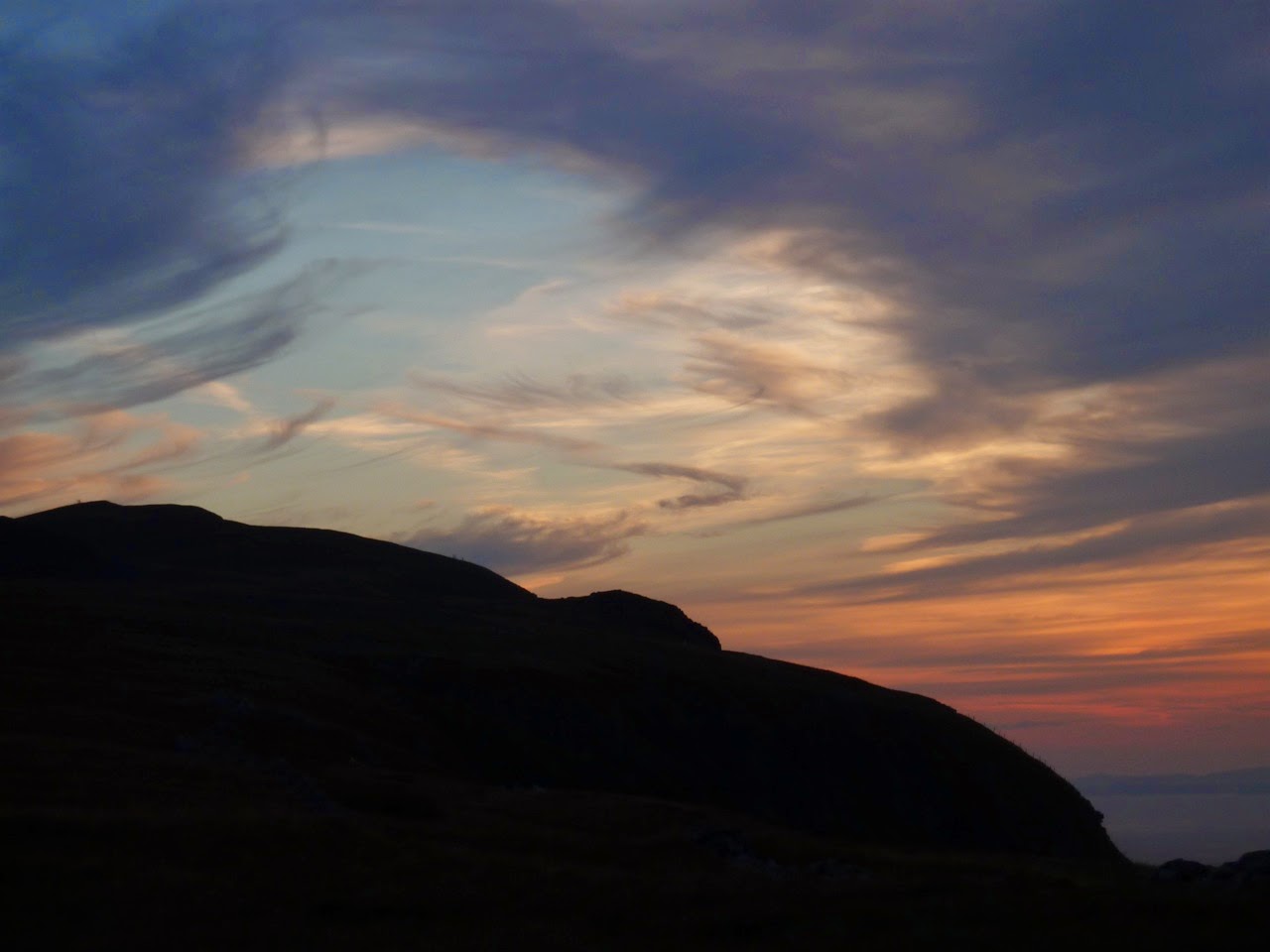 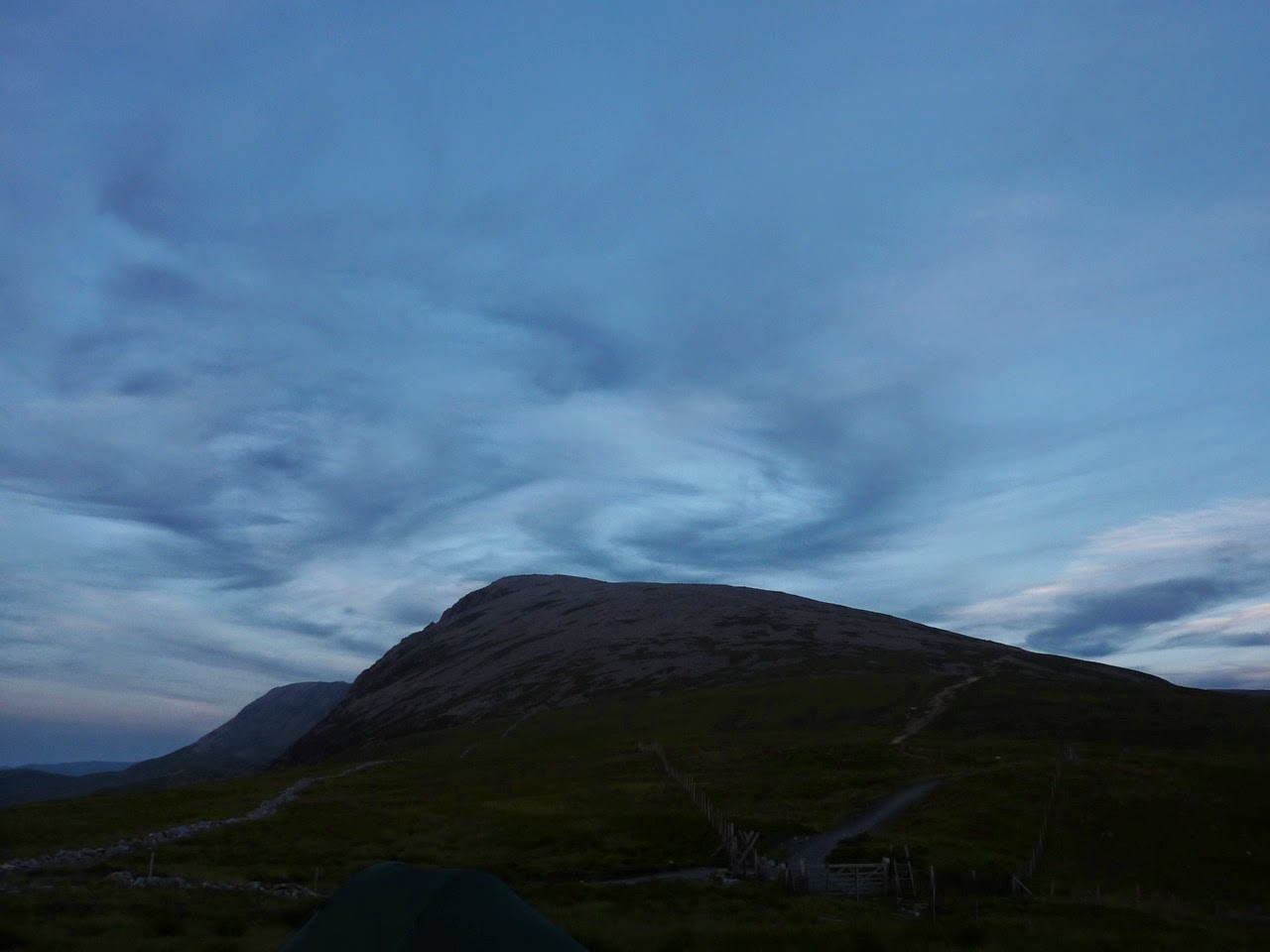 The devil at work.
And then it started! 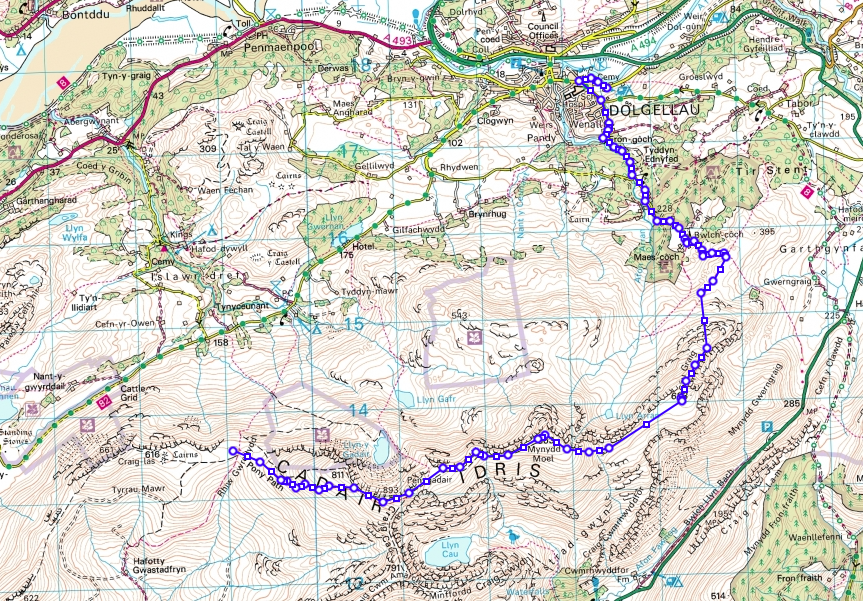 Todays Route, only 7.5 miles but tough.

Actually Alan I had been down to the loo earlier in the morning but had gone back to bed.A pity, looks like I missed a cracking sunrise.

Must have been just too early.