All around the Broom and Heather 2.

Another glorious day and one where we decided to just have time exploring the Town of Barmouth and the surround area.
With it being a bank holiday weekend Barmouth was busy but we enjoyed wandering around looking into the shops and admiring the renavation work being done to the Old Chapel on the main street.
We did a short ferry crossing and a trip on the Fairbourne chuffa train before having the worst fish and chips ever in Fairbourne. Grey cod and old oil smelling chips. Awful, they went into the bin.

Then we took a walk along the sea defences and headed off back to Arthog. I won’t bore you here with any further details but we are looking forward to tomorrows walk. 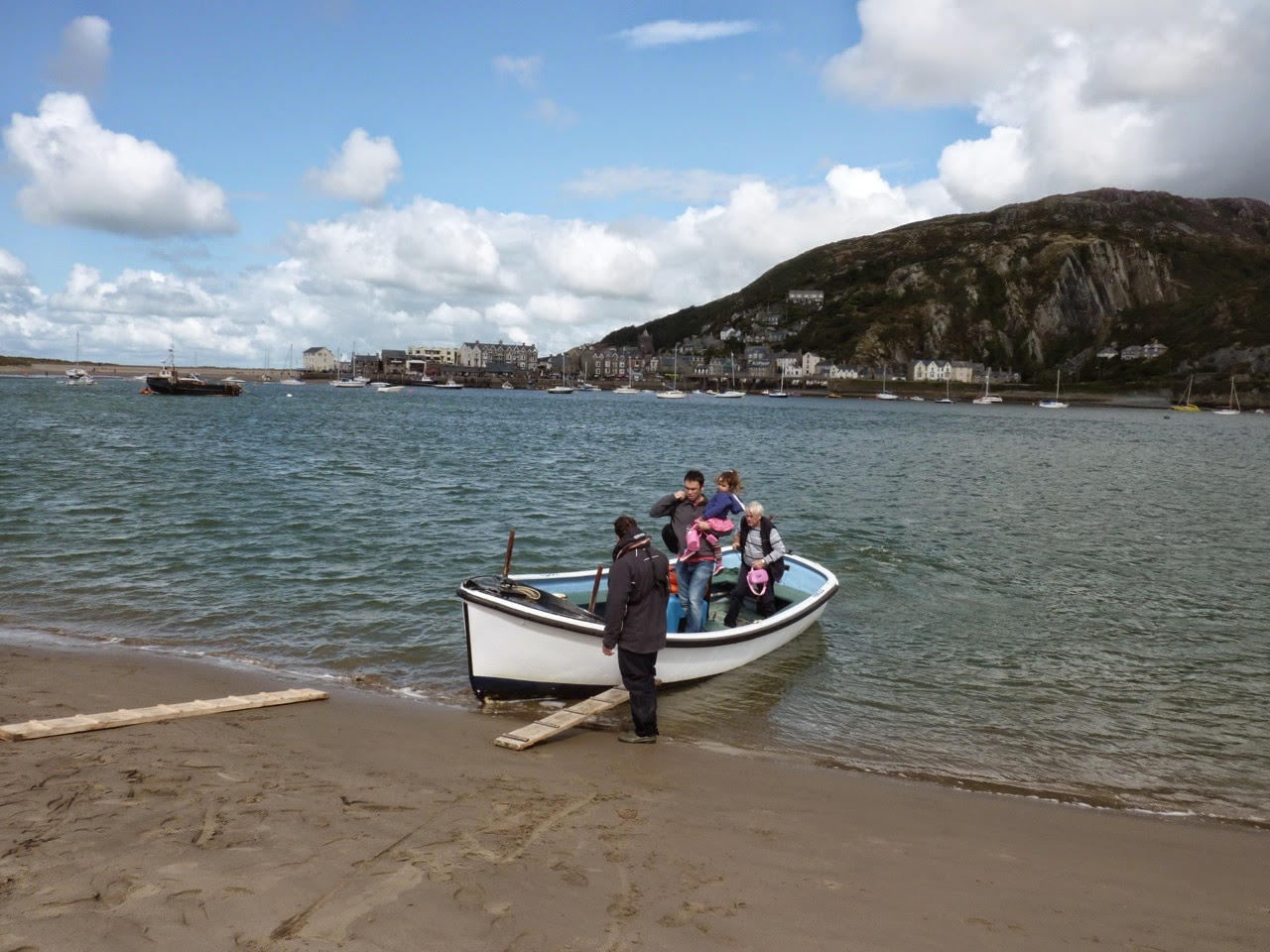 Our ferry boat from Barmouth 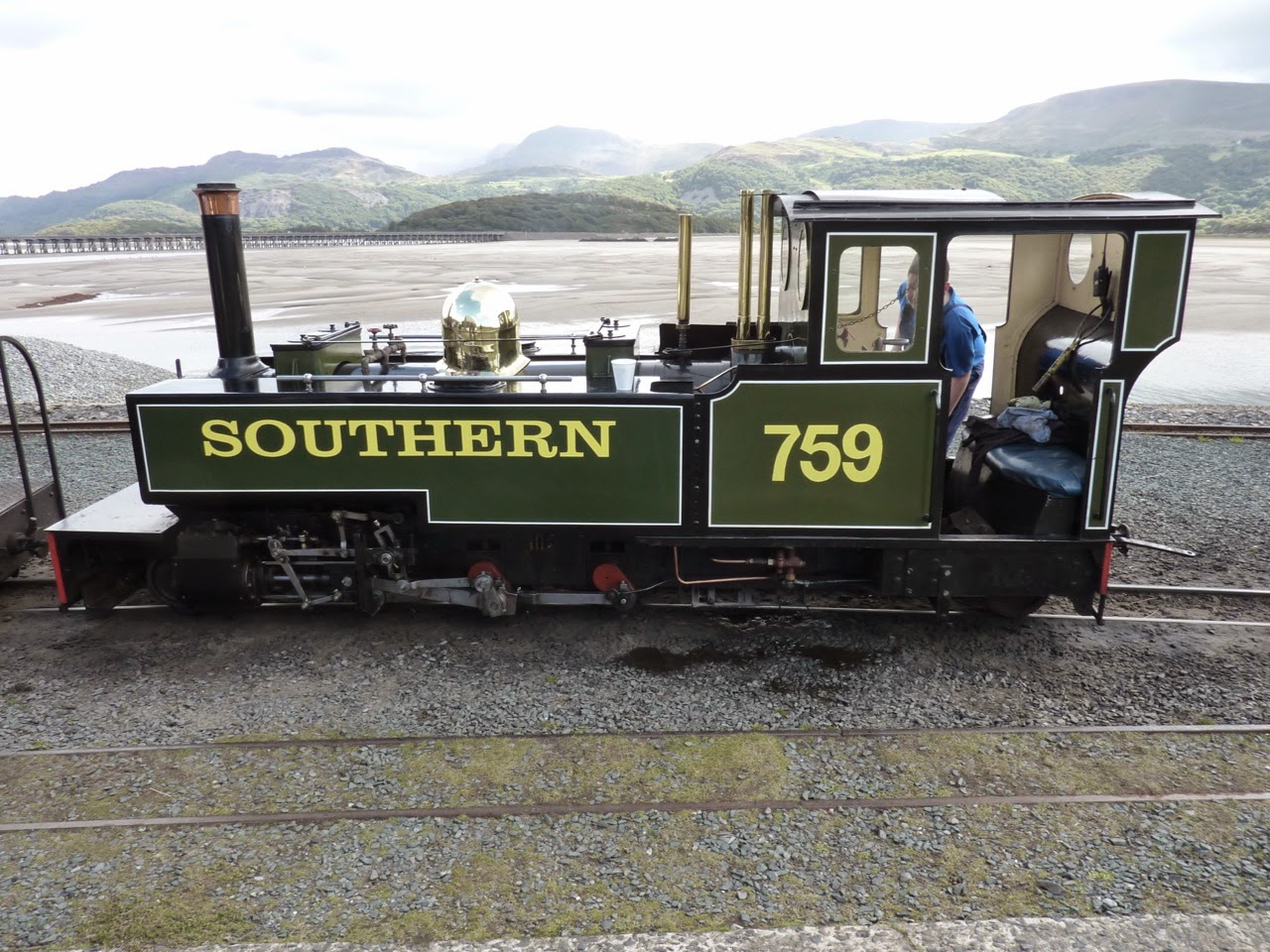 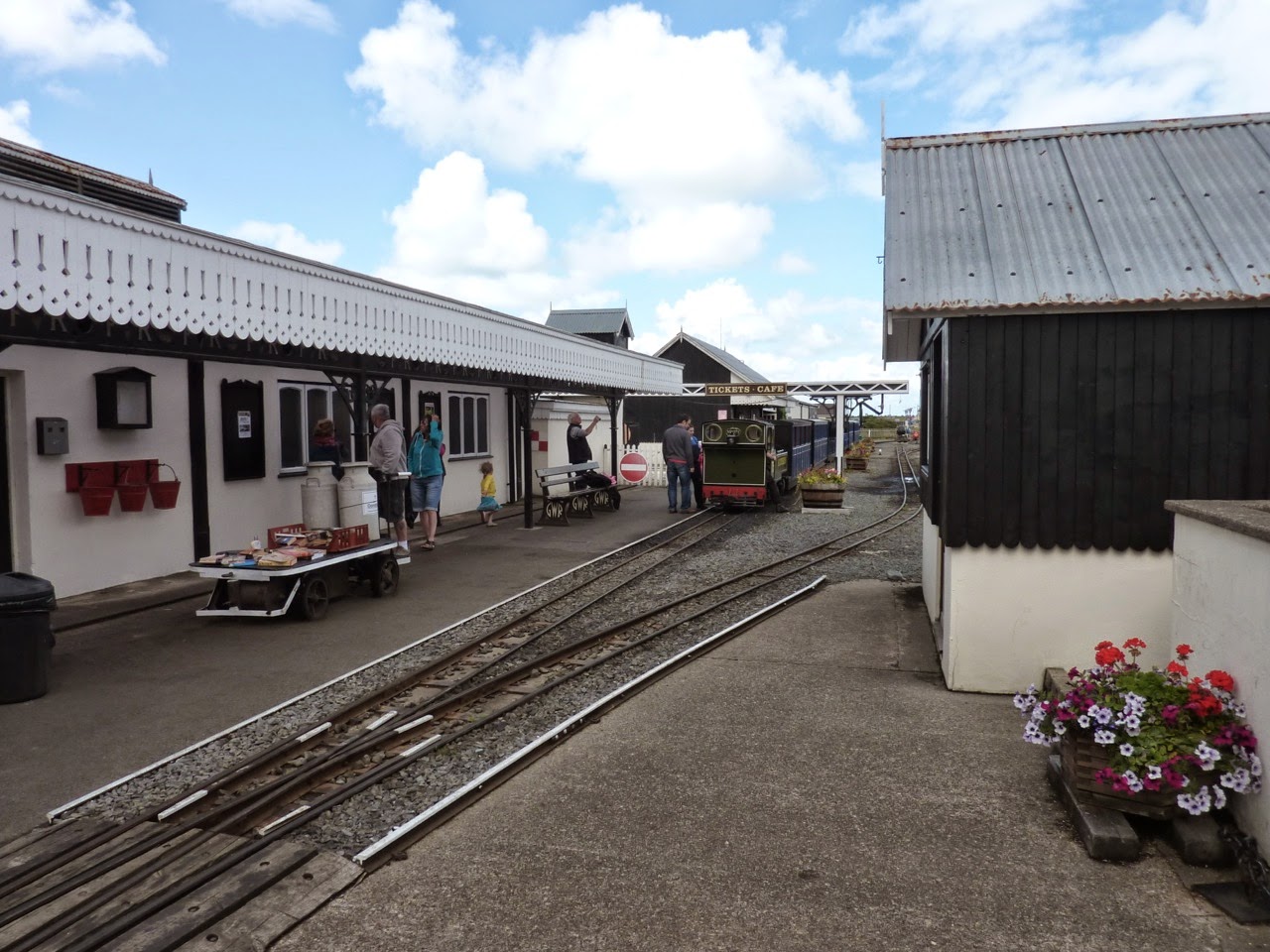 The Station at Fairbourne 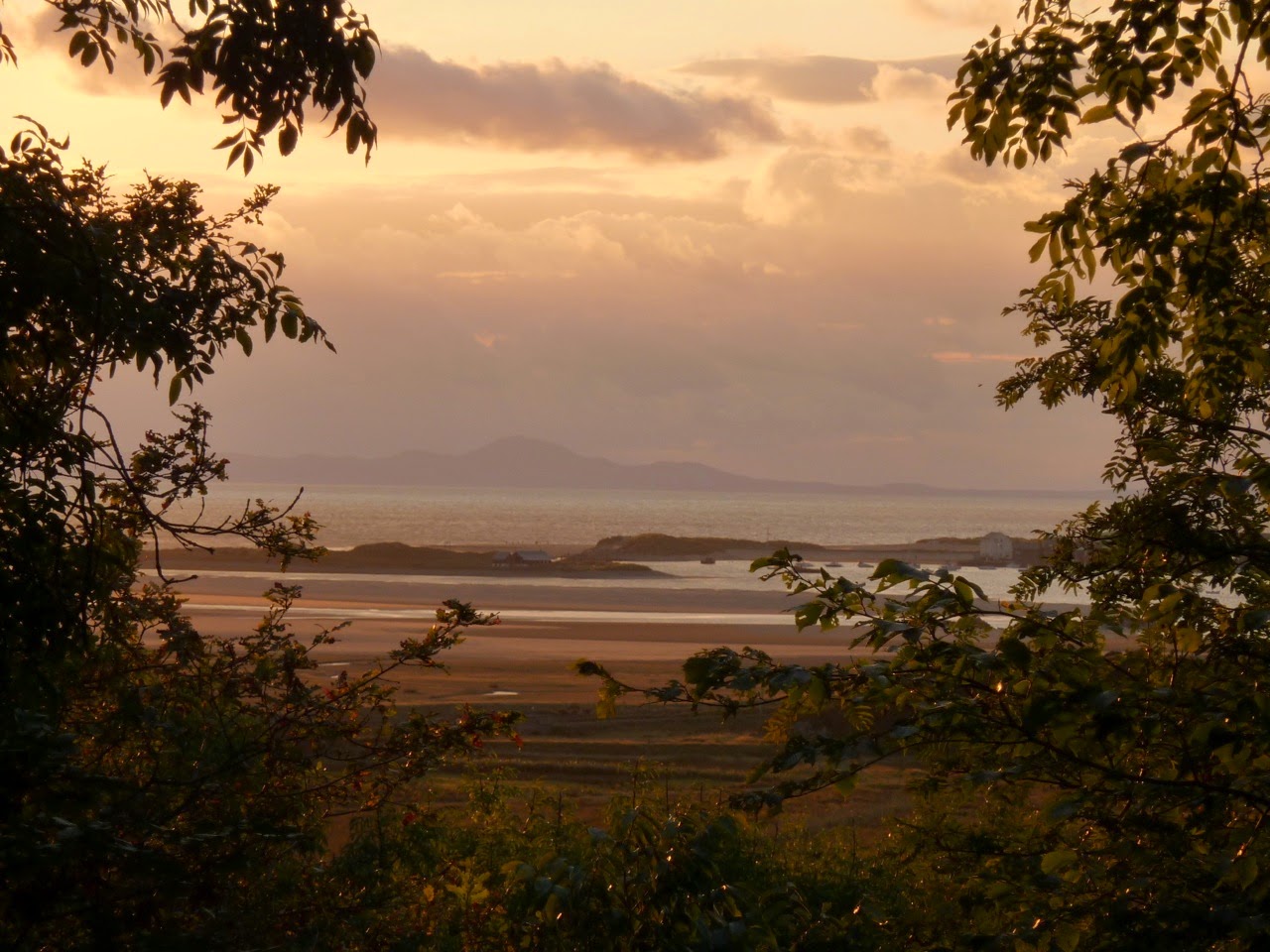 The sunset from our tent on Saturday Night

We parked the car at GR. SH634125, and headed off in a westerly direction into forestry operations. When the forestry cuts down trees and strips them of their branches and bark, why do they leave the area in such a mess? Why do then never go back and tidy up?

Anyway we picked our way along the track until coming to the signpost GR SH631120 that altered our direction to a southerly one through more forestry and heading for a good wide track at GR SH636113. Unfortunately for us this track is now being used for Off Road Vehicles and it was deeply rutted, glutinous muddy and should be avoided by walkers for the foreseeable future.

We persevered and was courteously waved forward by the front driver of a group of Land Rovers on their way down hill. We exchanged pleasantries and found out that there were many vehicles on the trip. They seemed happy with their lot.

Eventually we exited the mud with heavy boots onto a good wide cross mountain track which heads for Llanegryn. Pleased to be out of the forestry i checked my GPS location to ensure that we actually did exit where i wanted to be as there were many tracks within the forestry that are not marked on the 1:25,000 map. We were in the right place. 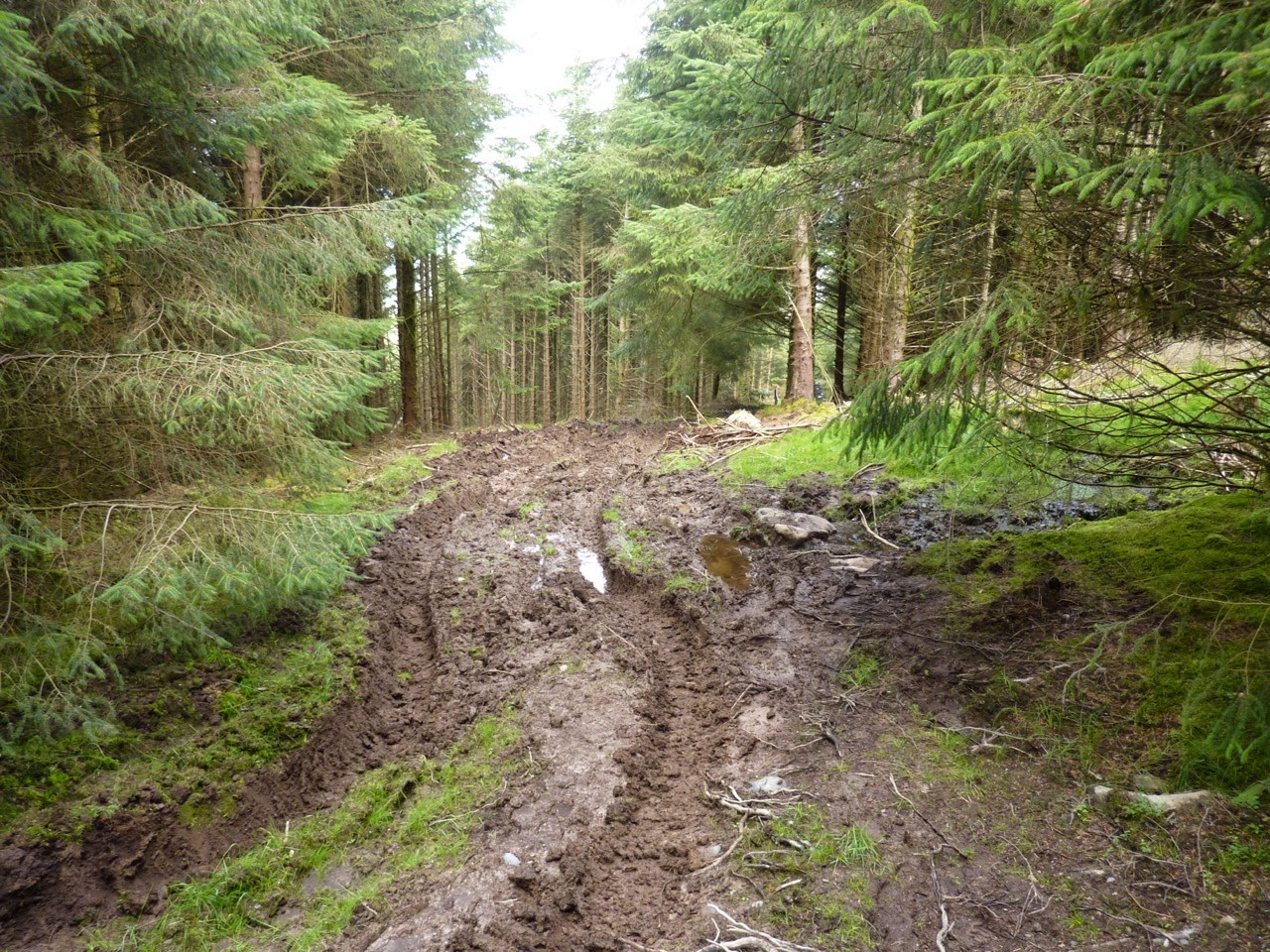 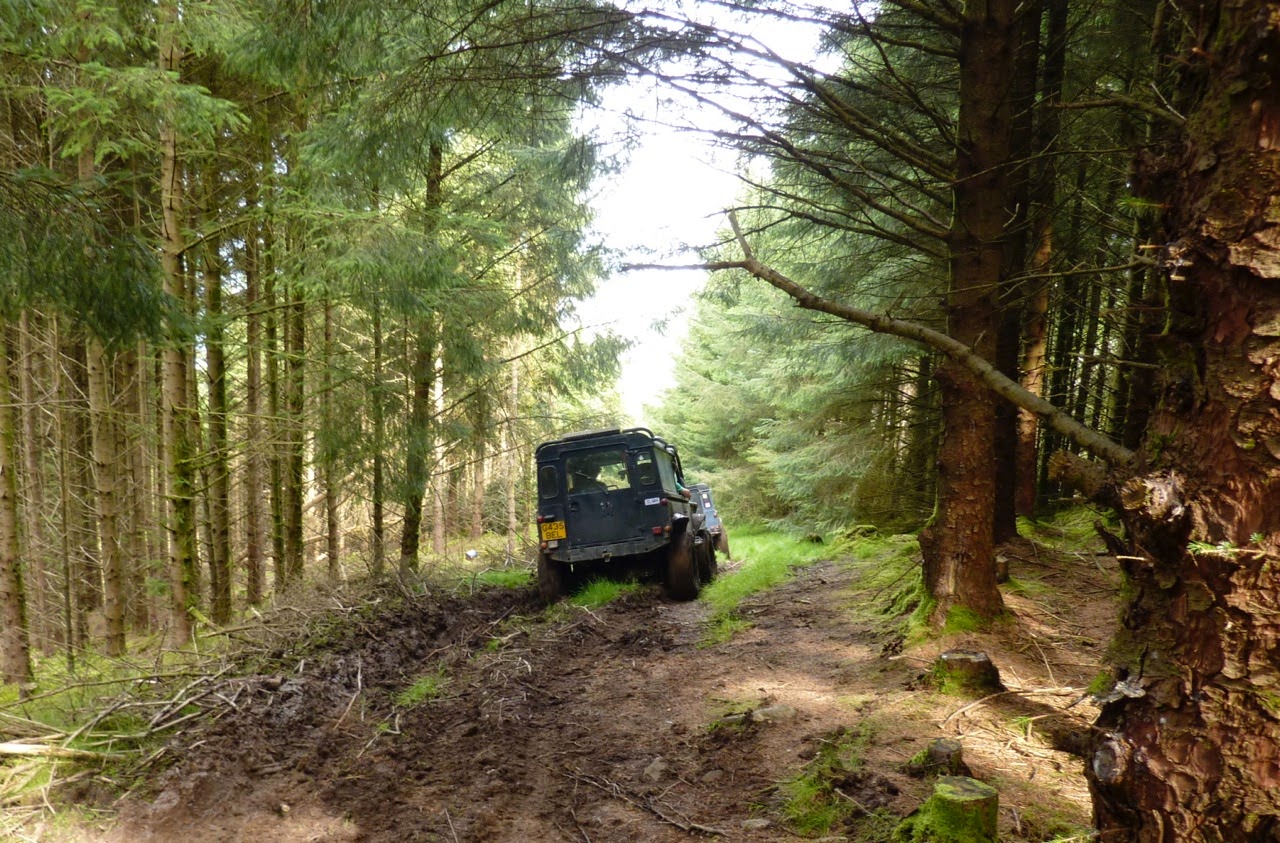 And the off roaders.
On the way up the track we found many Fly Agaric fungi and it reminded me that Fungi season is here and i must get out looking for unusual ones sooner rather than later.

Our first top was to be Pen Y Garn at 460 metres. We passed through a boundary gate and across a fast flowing stream. There isn’t much water about in this area as we found out earlier in the month so i post this for any backpackers heading this way in the future that good water is available here.

At the end of the forestry there is an old slate tramway and also a farmers ATV track heading up from it to the top of the hill. It was pleasant easy walking but there was lots of nettles and thistles to negotiate.
At the top of the hill we were met by a wall with a barbed wire fence atop with the summit of Pen Y Garn on the other side.
The easiest point to cross it we found, was at a corner post where there were easy hand and foot holes available on both sides. The summit trig point and surrounding wind break was then only a hundred metres away.
The views from the top are spectacular. 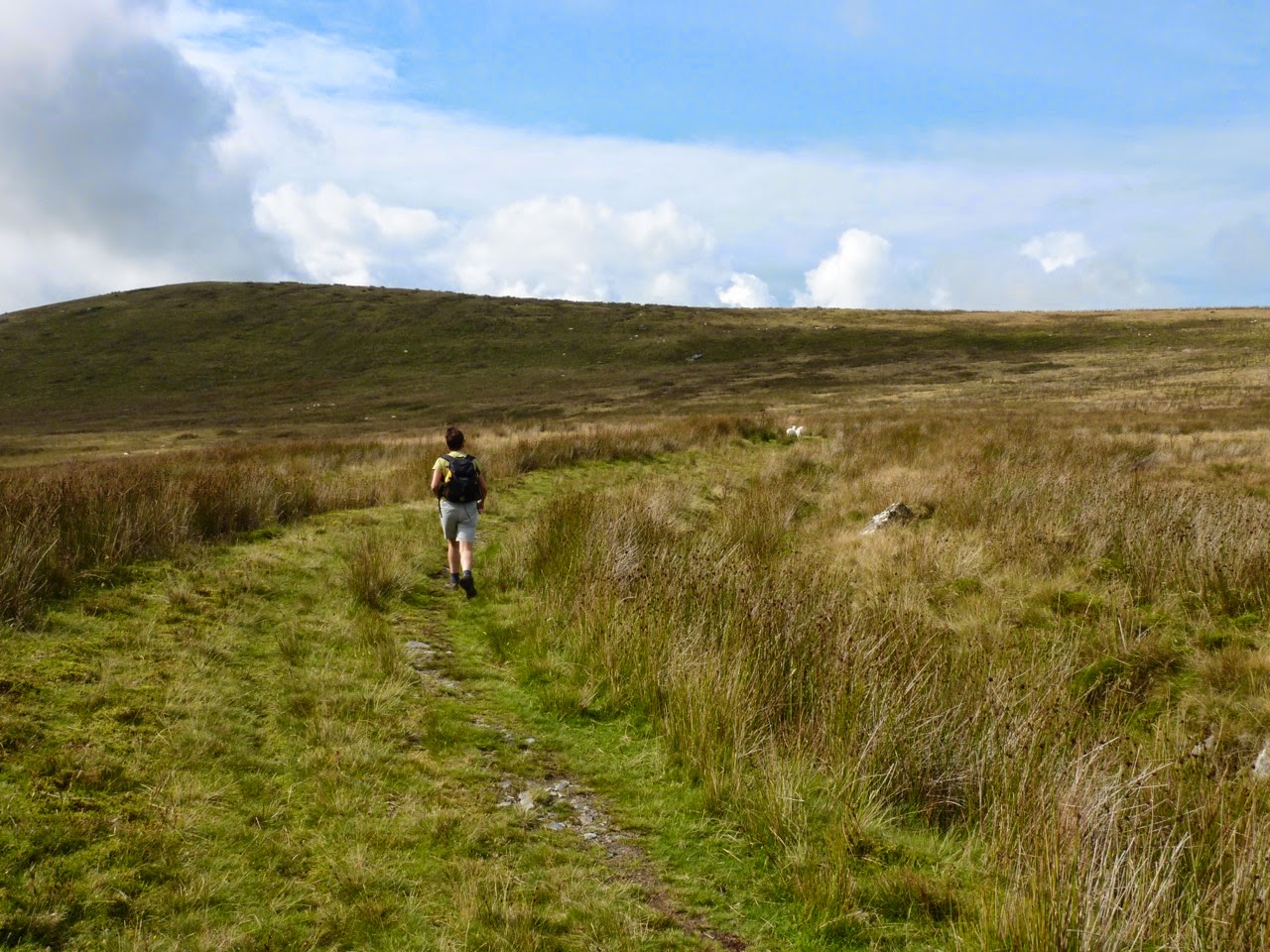 Sheila strides out, aiming for the top. 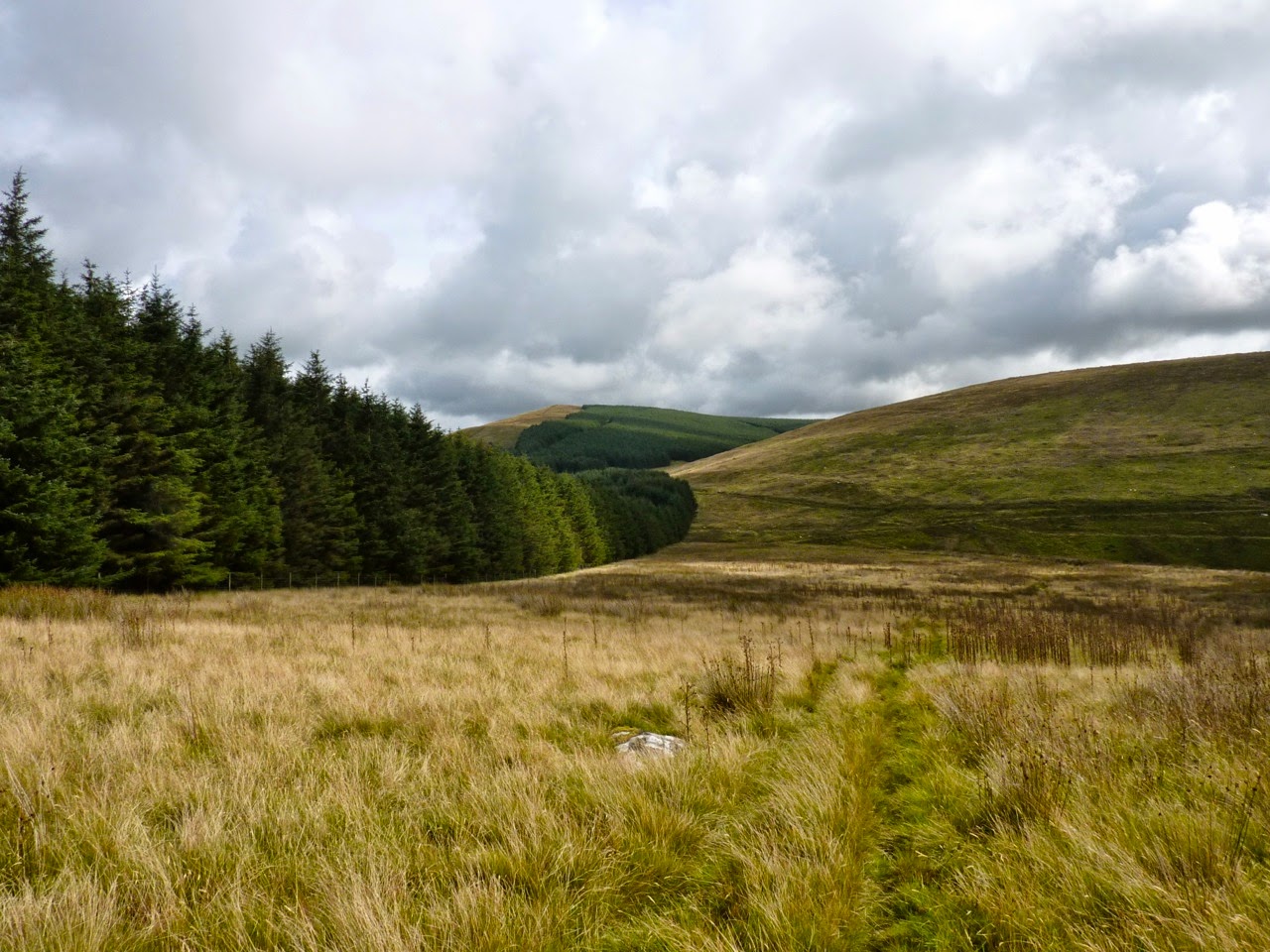 The ATV track and the forestry edge to follow to the summit of Pen Y Garn. 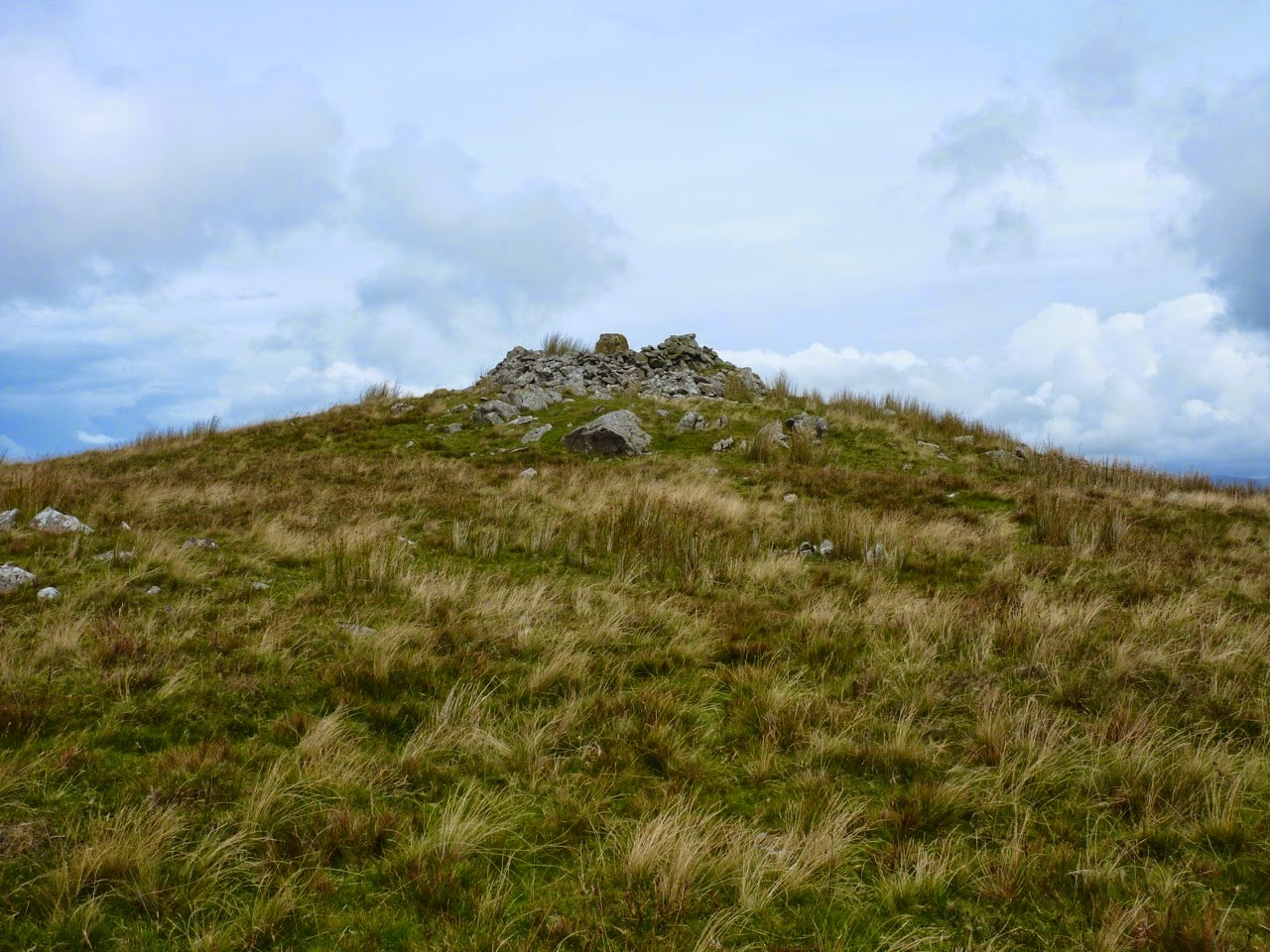 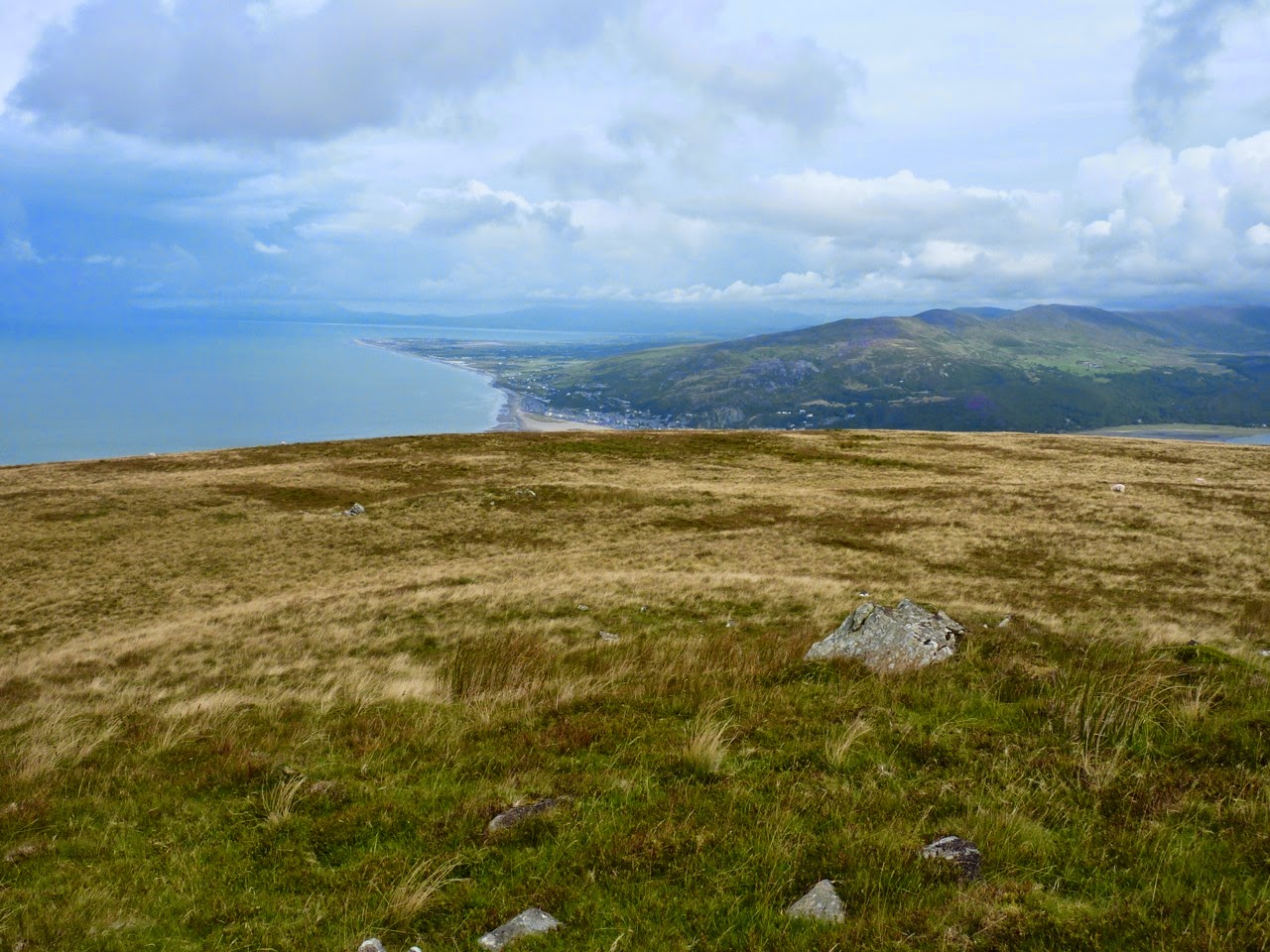 View North from the summit. 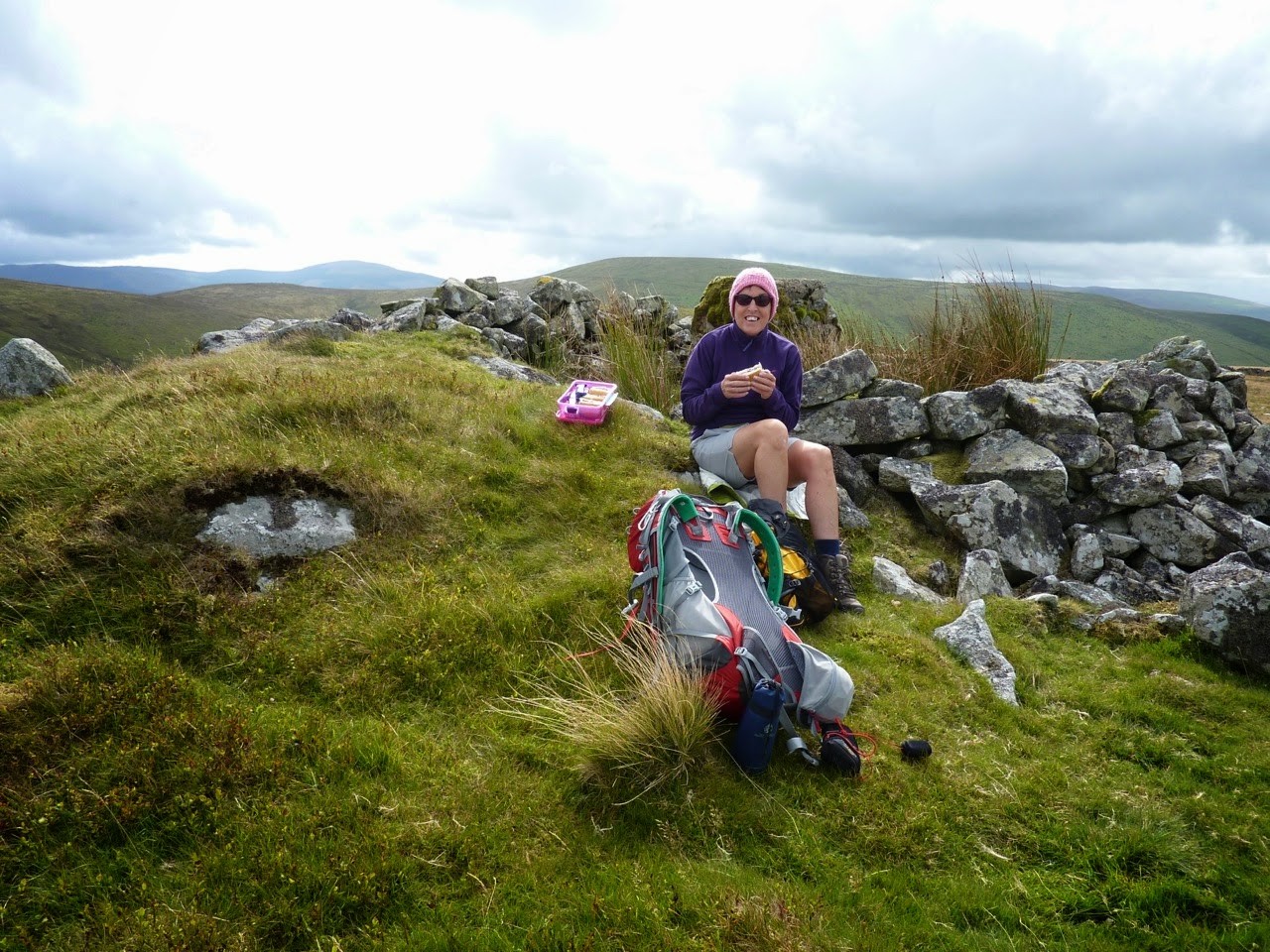 Lunch at the trig point. 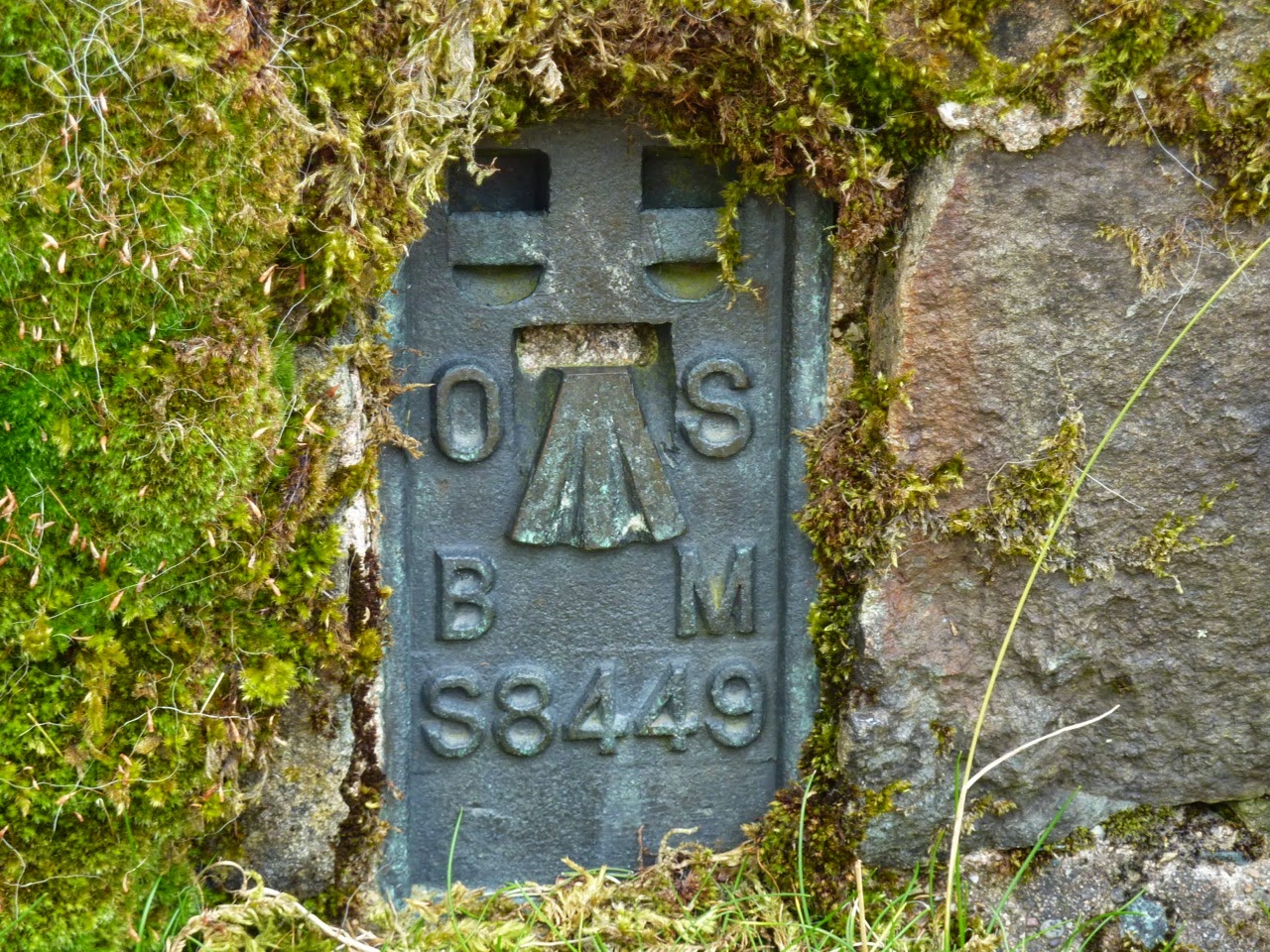 Pen Y Garn trig point plate.
Leaving the summit we retraced our steps to the point where we left the forestry and then continued on the good track to where we crossed the boundary fence and headed for the summit of Braich Ddu.
The path we took which was on the north side of the fence is not marked on the map but does exist on the ground. We had planned to use the track through the forestry which is marked on the map but the Off Roaders were using it and it looked as bad as the one we walked up earlier.

A farmer was busy gathering his sheep on his quad bike and his 3 Collies were enjoying the ride on the back.

The views from our path, all the way to the top were wonderful and i’m so glad we chose to avoid the  forestry route. A few landies pasted us on the other side of the fence and they were really churning up the hillside. We wondered what the farmer thought about this mess. 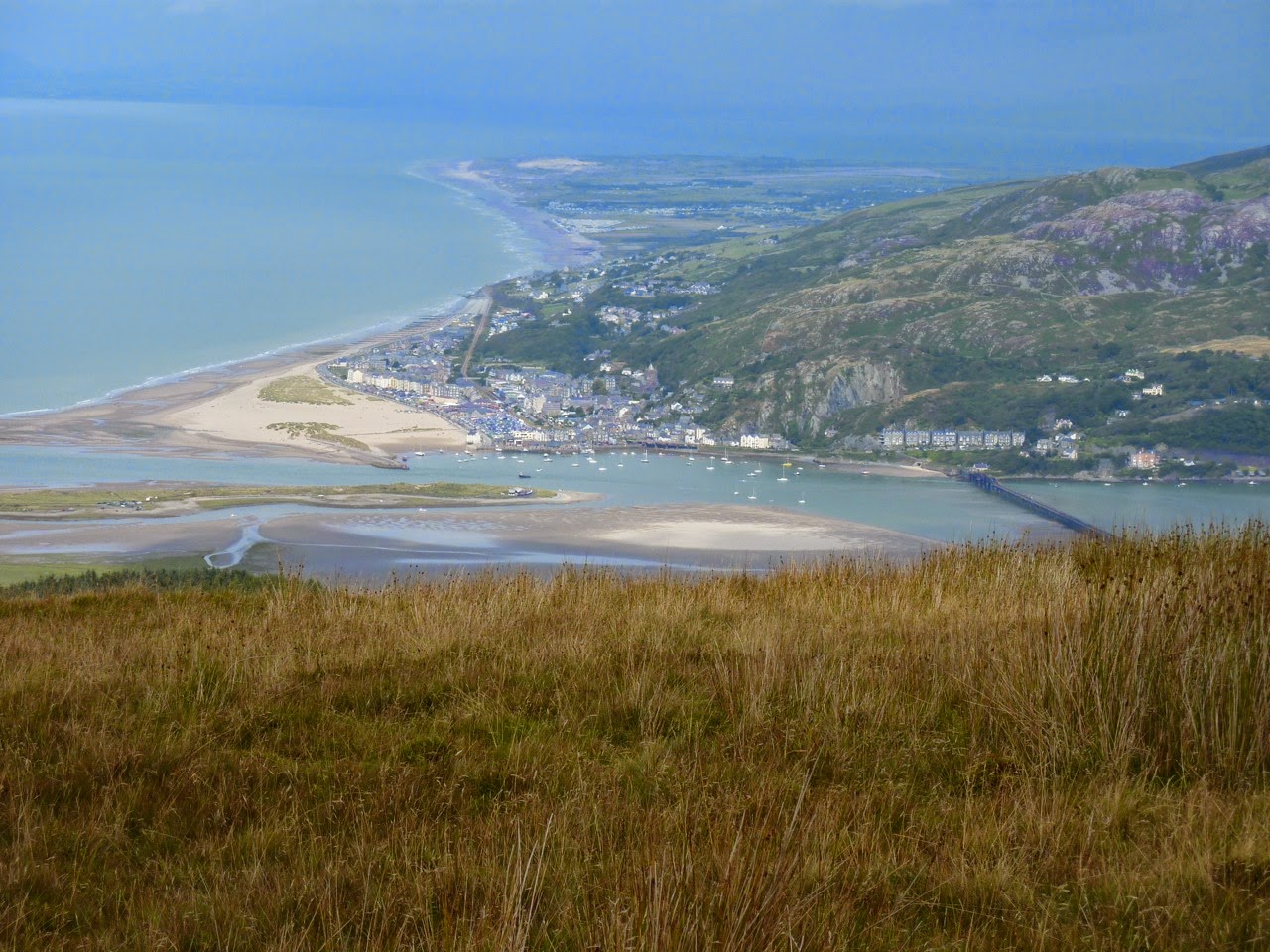 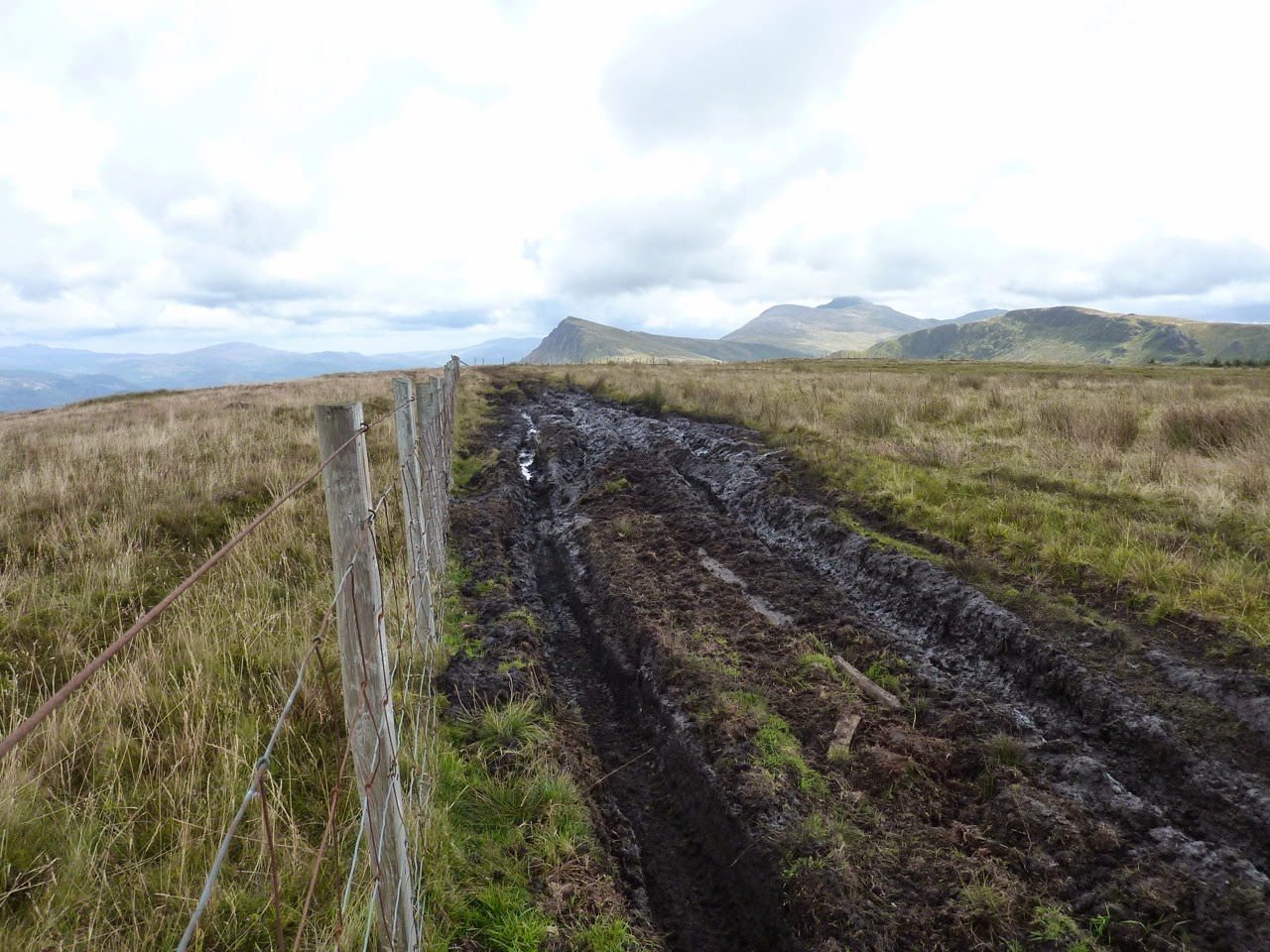 The destruction on the way up 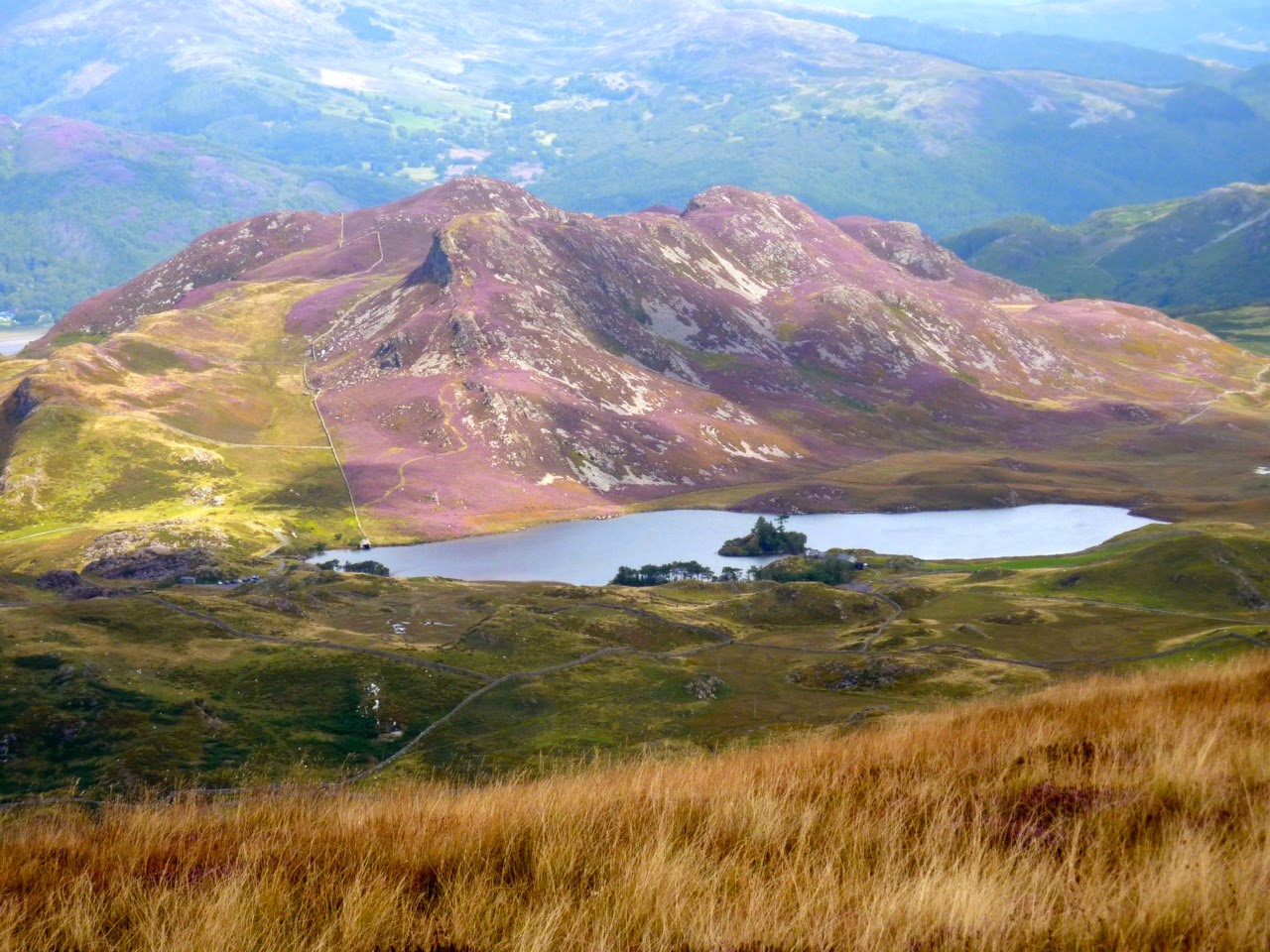 Part of the ridge walk, and Llynau Creggenen, we did on Friday. 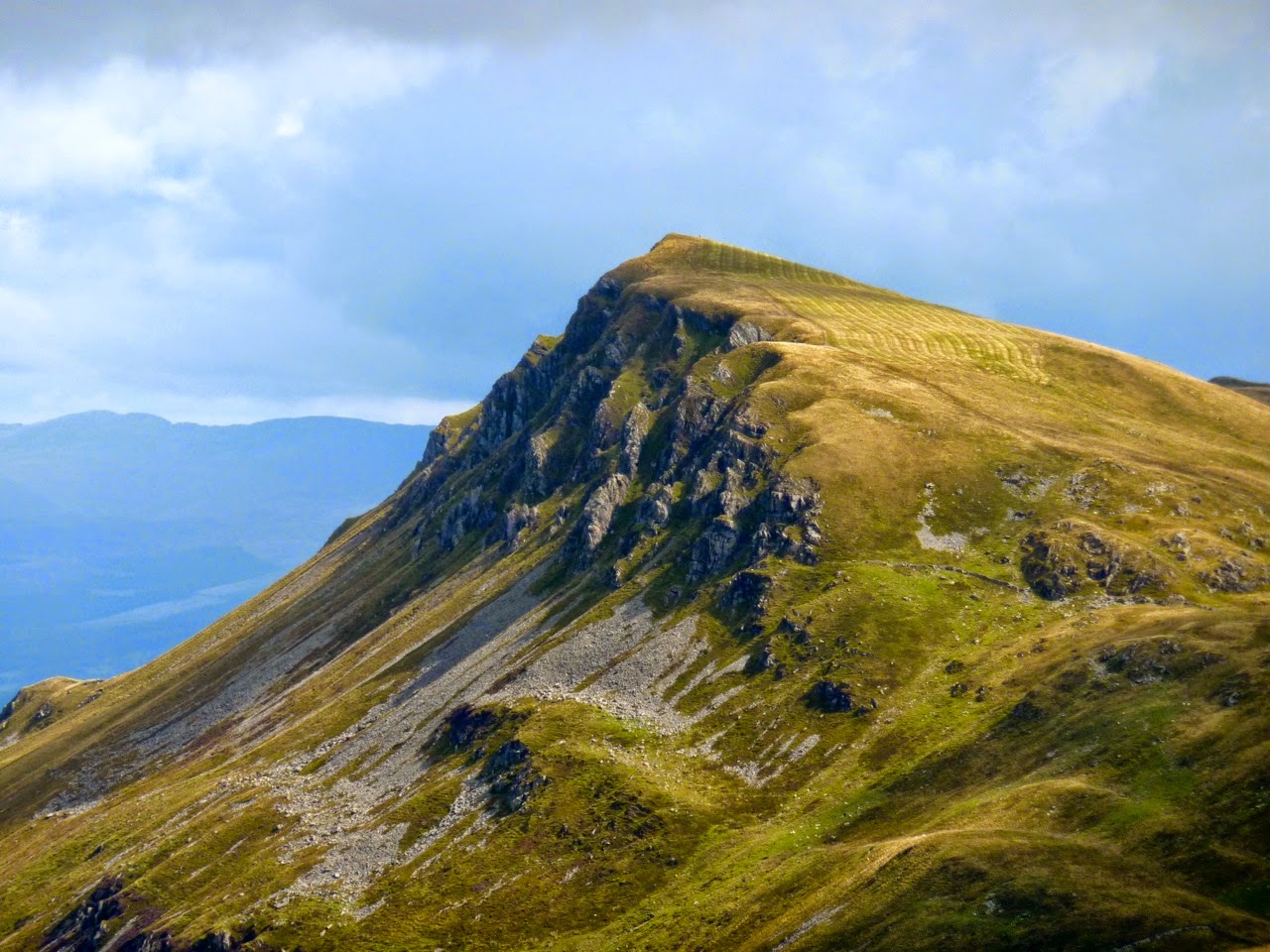 The western end of Craig Las zoomed from Braich Ddu. 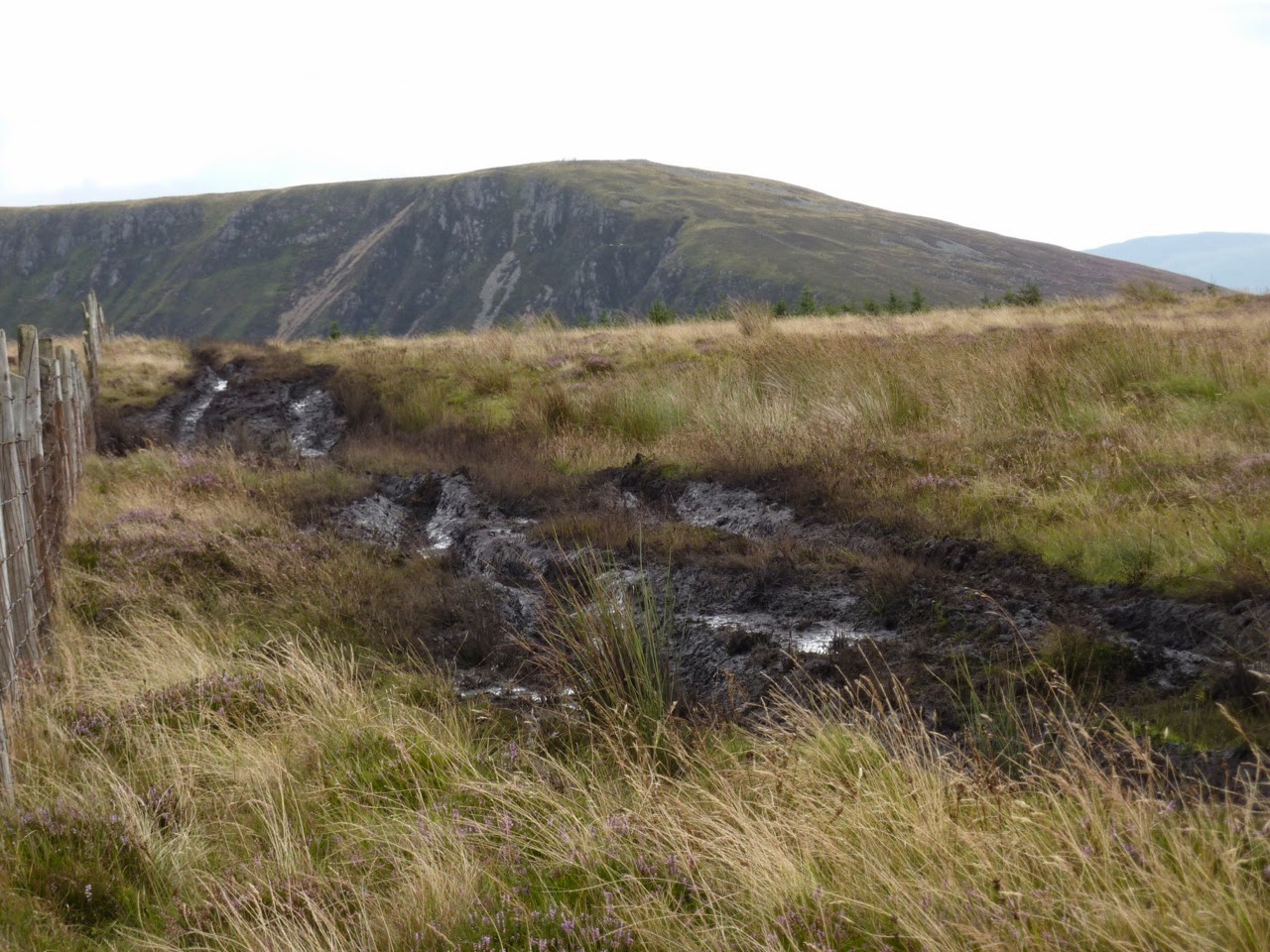 More damage and the Craig Y Llyn ridge.
From our top we considered heading for the camp site where we were blown off a few weeks ago but time was running out for us. We definitely wanted to stay clear of the forestry and the mud and so we headed down the same route we ascended.

When we reached the LRT at the bottom we found a place for a cup of tea before finding a route down to the car. Again no path is shown on the map but one does exist on the ground.
It had been a good day. 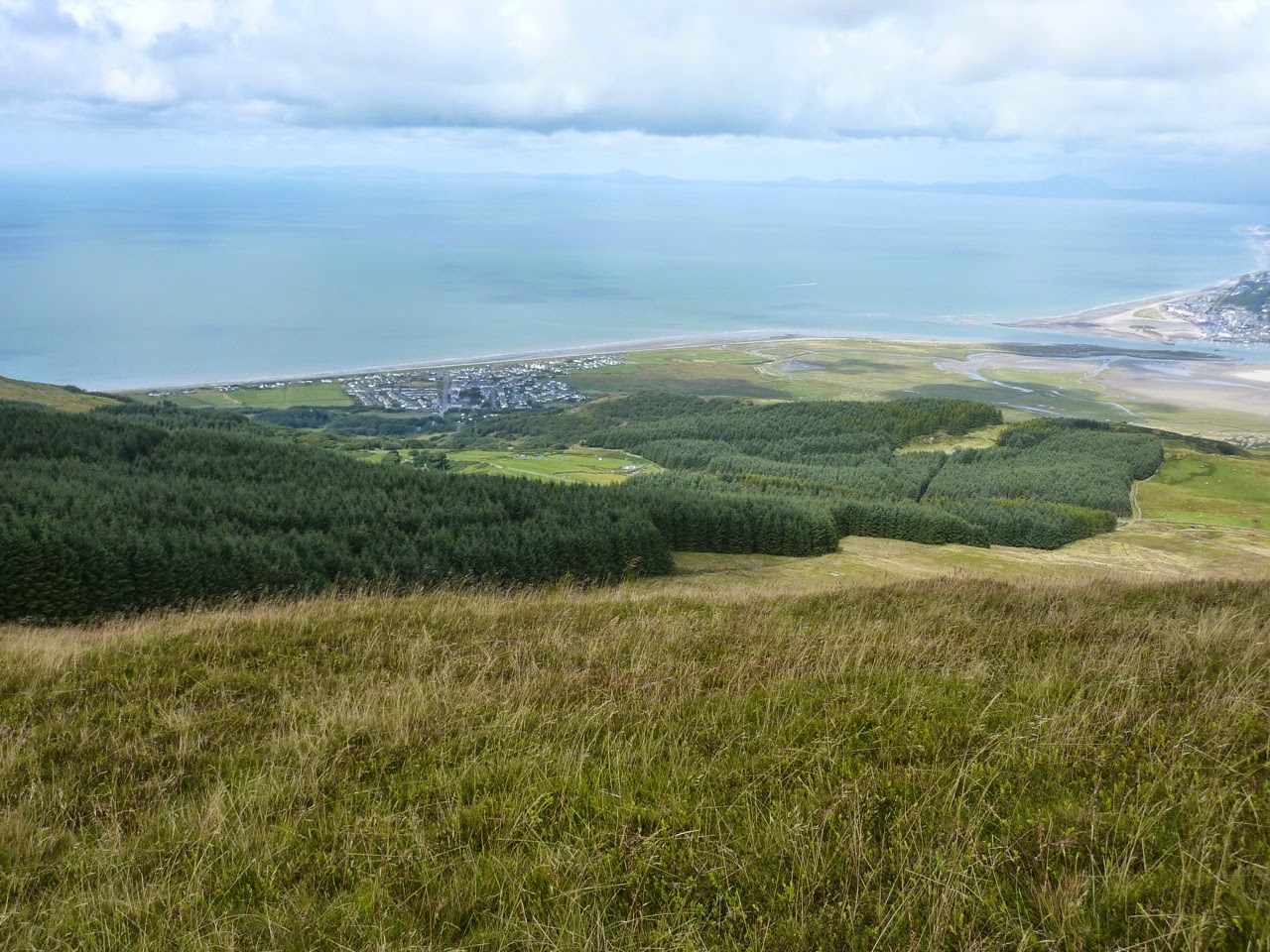 The view on our way down from Briach Ddu and our red car can just be seen on the far right and you can pick out a track to the right of the forestry which we took and is not shown on the map. It was certainly a better route than the mud fest and we would use it again to ascend next time. 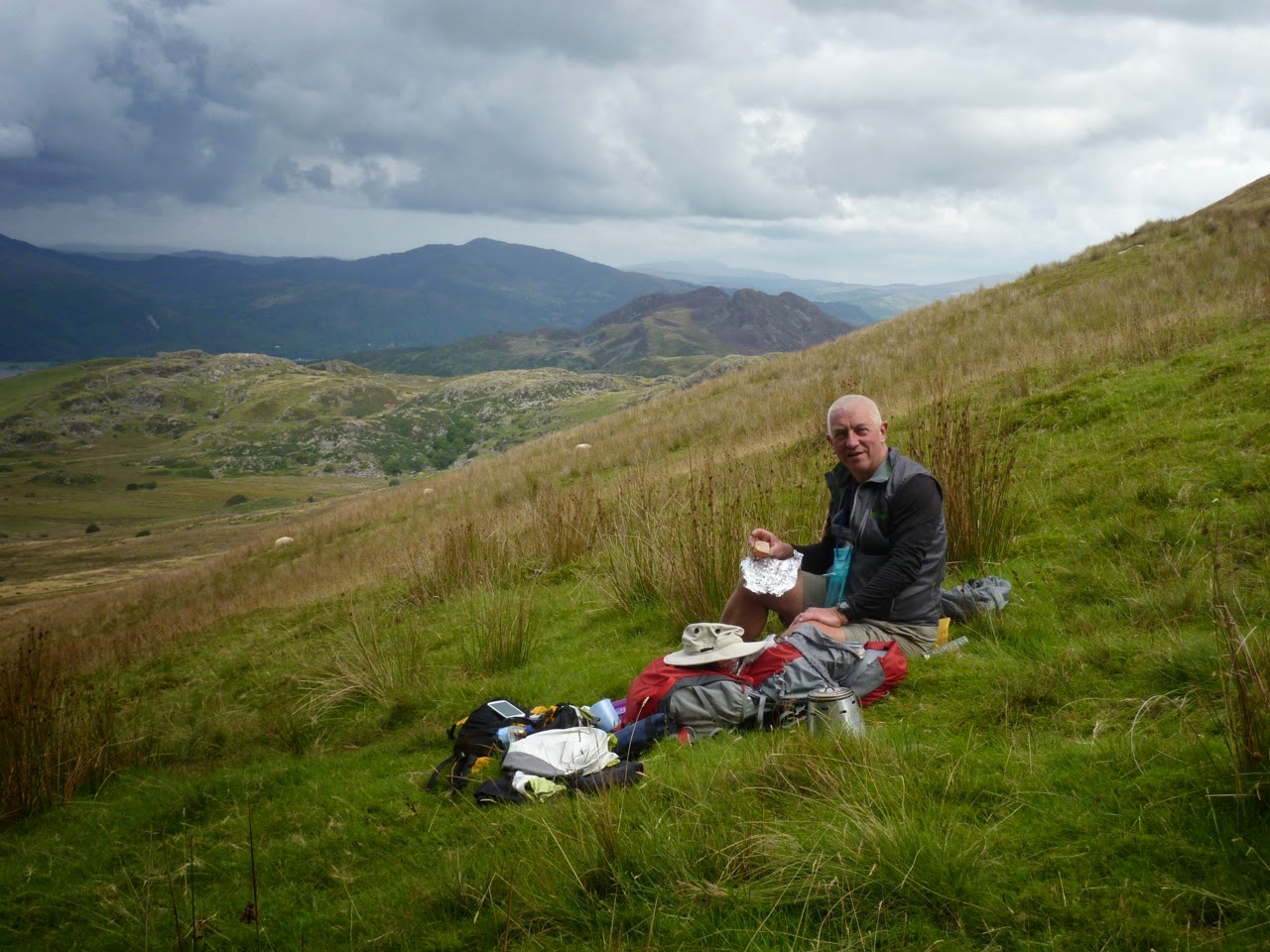 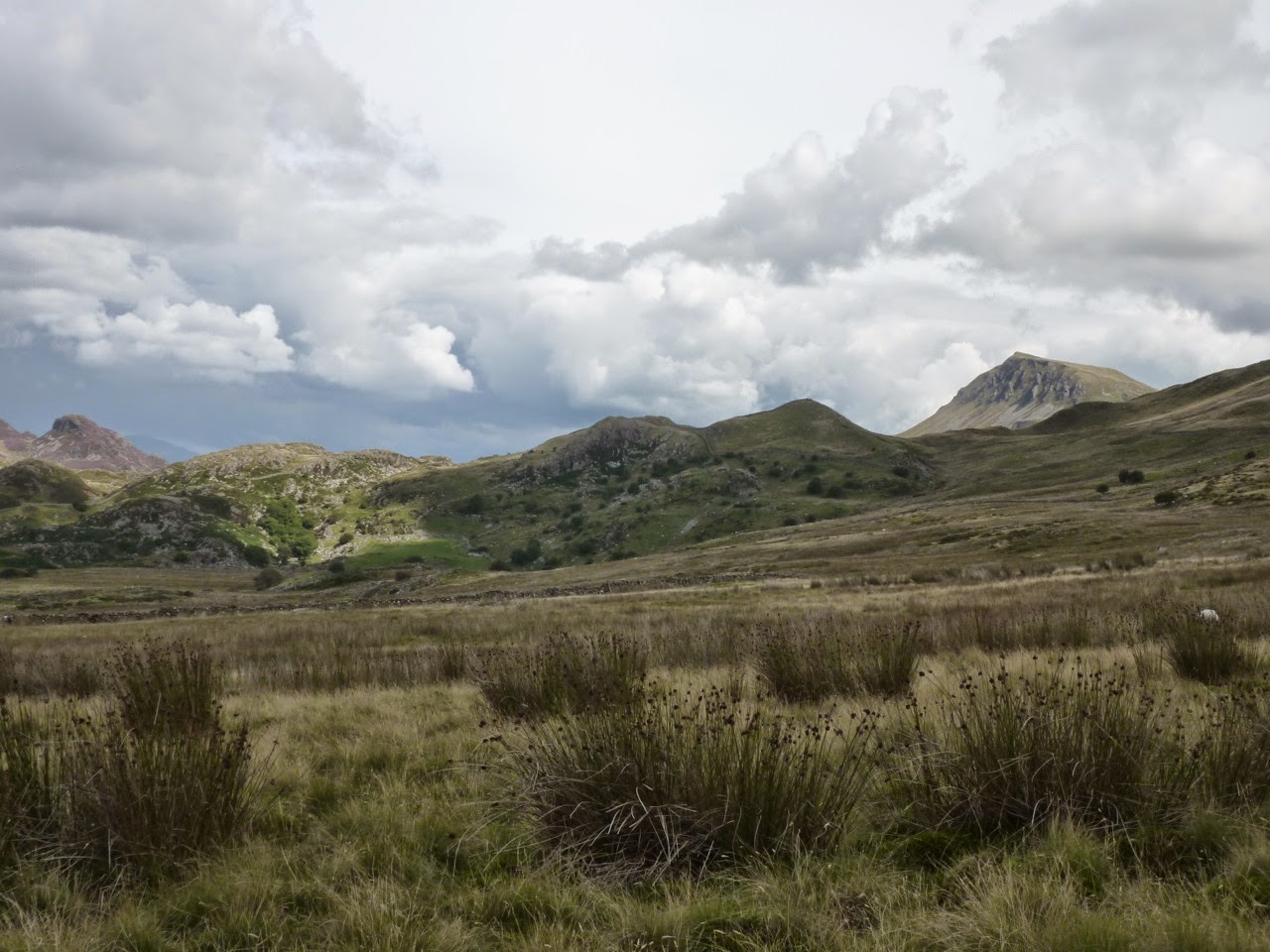 Another view from our brew stop. 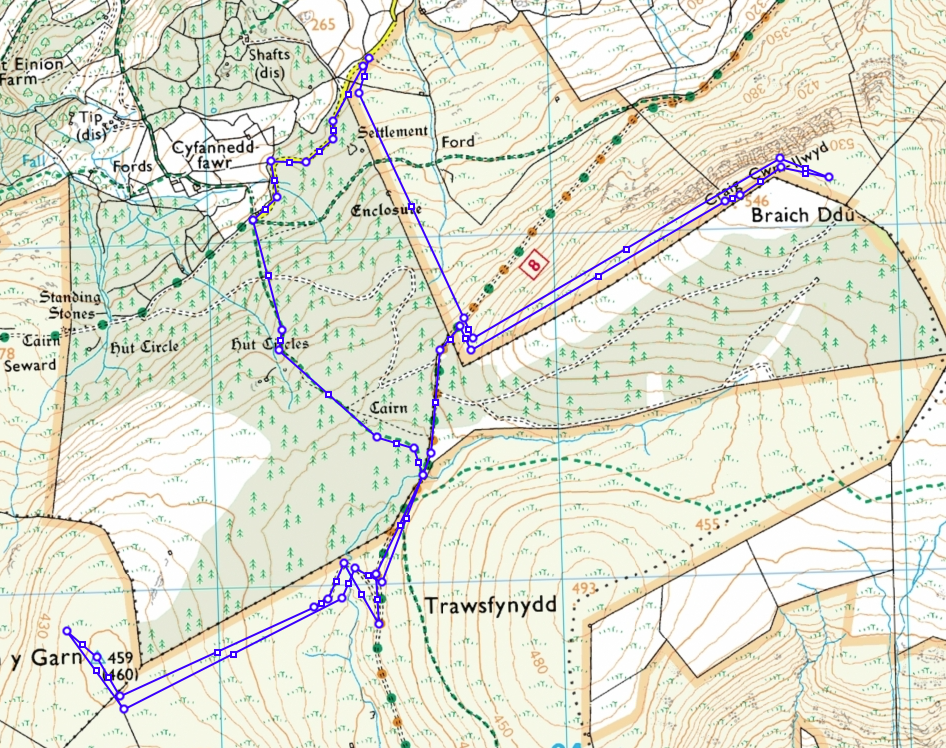 There really isn’t much to tell about Bank Holiday Monday. It was dreadful. We had a bit of a walk in the morning but as you can see from the 2 photo’s below it was horrible.
There were no people about and we felt that we were totally alone. Weird.
So in the afternoon we did the touristy bit in Dolgellau and had a look round the wonderful outdoor shop there. The Cader Idris Outdoors. If you pass this way do call in and have a look at the good stock he has in. The web site is still under. 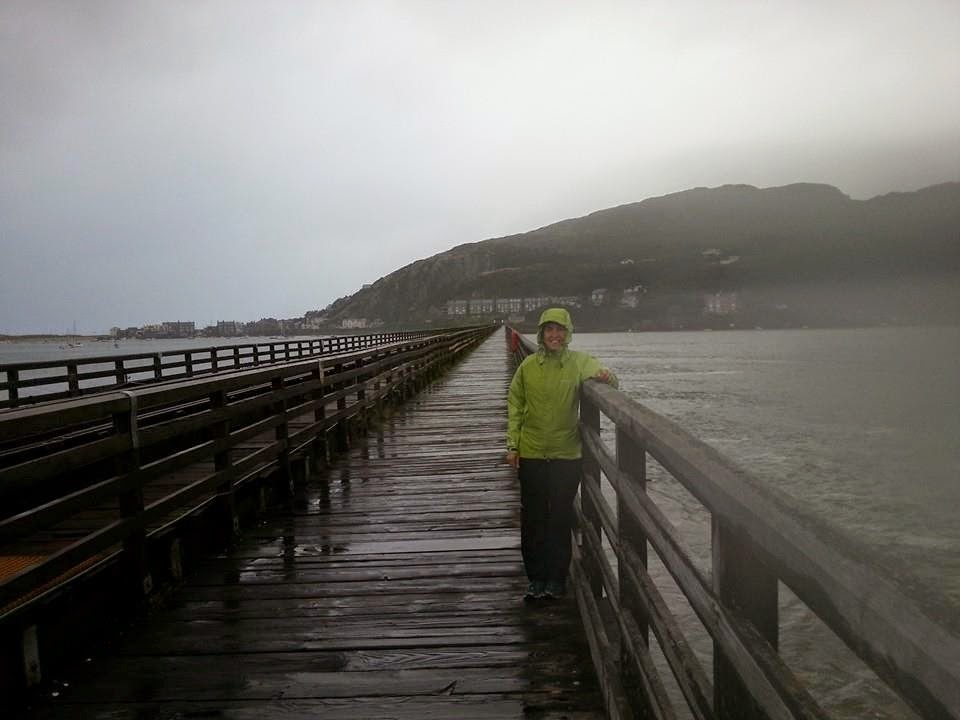 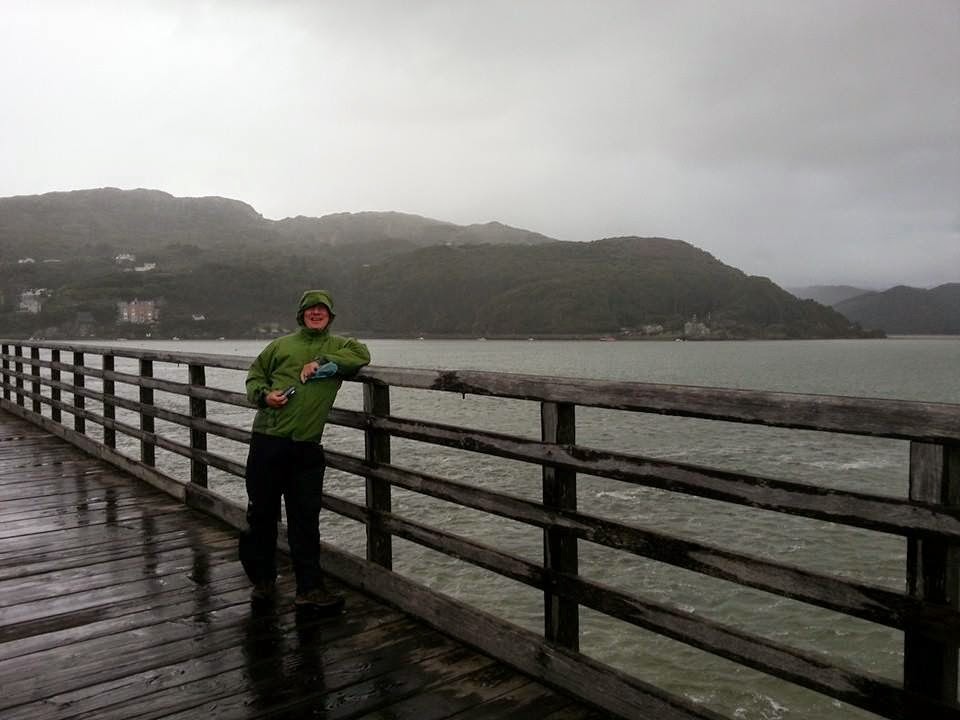 Hi Alan, great informative posts. It must be 30 years since I went to Barmouth. The first time I went with my dad camping nearly 50 yrs ago. I don't remember much about it other than the old primus stove that needed pumping and seemed to flare alarmingly. Must go back.

There is definitely loads to do here and we will be back too. I had one of those old Primus stoves. They were brilliant. It disappeared when i moved house.