On a gorgeous day although slightly misty, Terry and I got the train to Sowerby Bridge. It’s a 40 minute journey and the train was quiet. We left just after rush hour.
Our plan was to walk from Sowerby Bridge along the Hebble into Brighouse and then get  the bus into Huddersfield for lunch. Then head south to the Huddersfield narrow canal and finish in Marston where we get the train back into Manchester Piccadilly.
It didn’t quite work out as planned, Terry’s back was giving him grief and it was obvious by the time we got to Brighouse that he couldn’t carry on. By sheer coincidence our duo rail ticket included a return trip and so we only had to pay to get back to Sowerby Bridge.

For me this was my first walk along the Hebble and Calder navigation and it was delightful. Very pleasing scenery. And as is usual with walks of this type there are lots of industrial architecture along the way from follies, big old mills to old canal markers and more.

Before setting off we had a quick look at the deep lock in Sowerby which is on the Rochdale canal. 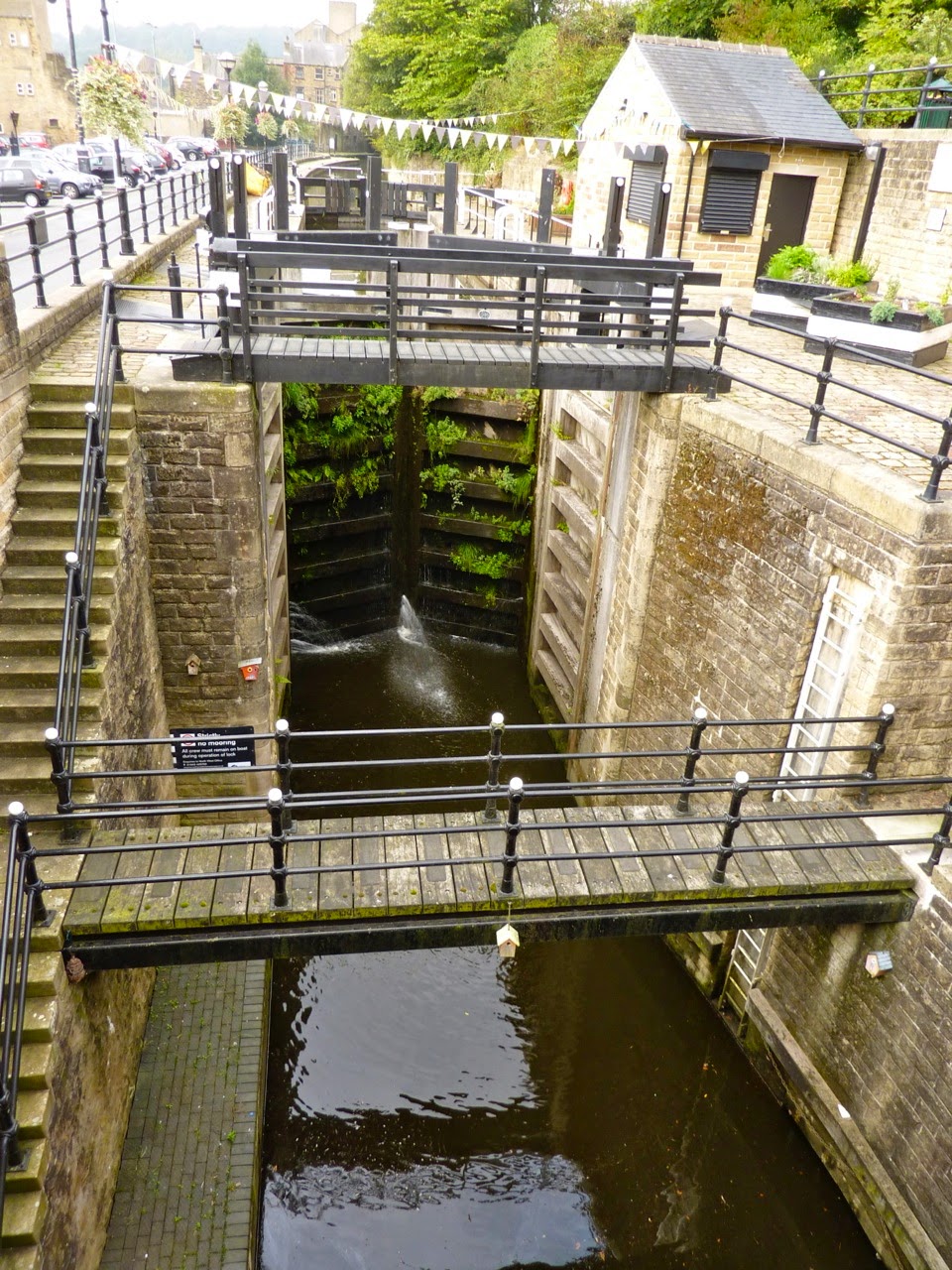 The large marina in Sowerby was where we picked up the towpath and walked past Lock number 1 of the Rochdale Canal. The marina was bustling and the new cafes were doing a roaring trade. Obviously the Indian summer weather had brought the visitors out. The towpath however was quiet, with only the odd cyclist, runner, dog walker and day walker.

For quite sometime we had the massive Wainhouse Tower in our view on the right. Calderdales highest structure and the worlds highest folly at 275ft, its location is SW Halifax. It was built between 1871 and 1875 as a chimney. There are 403 steps inside its octagonal shape and leads to a viewing platform.
The cost of building the tower was £14,000. In 2006 it had restoration work done to it which took 3 years and cost £400,000. It is open to the general public. It must be a fantastic view from the top. 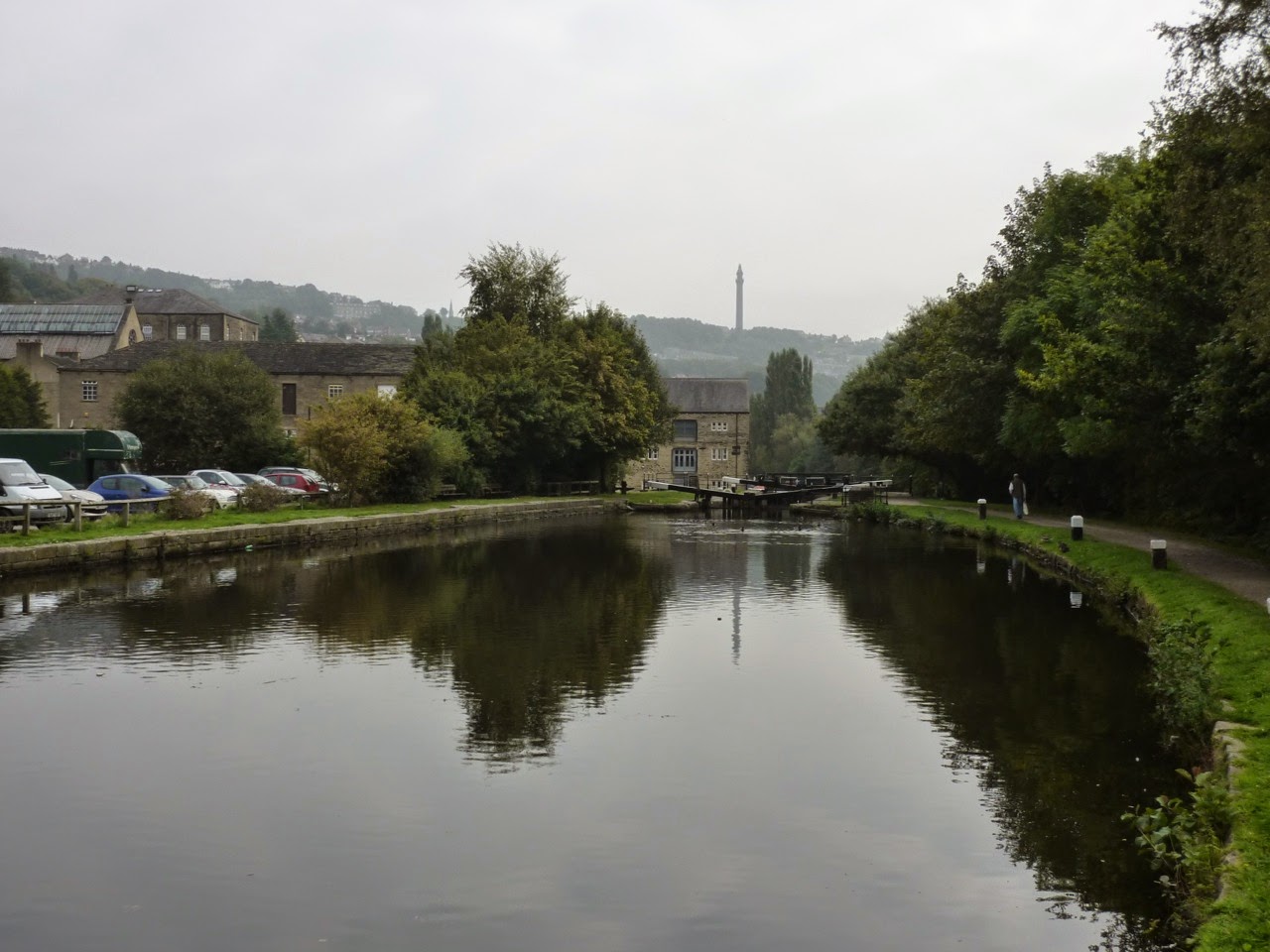 Sowerby Basin and the Wainhouse Folly in the distance.

The Calder and Hebble navigation starts in Wakefield and the first lock is at Fall Ings. All along the towpath you can find mile stones that show the distance from Fall Ing. Strange name. 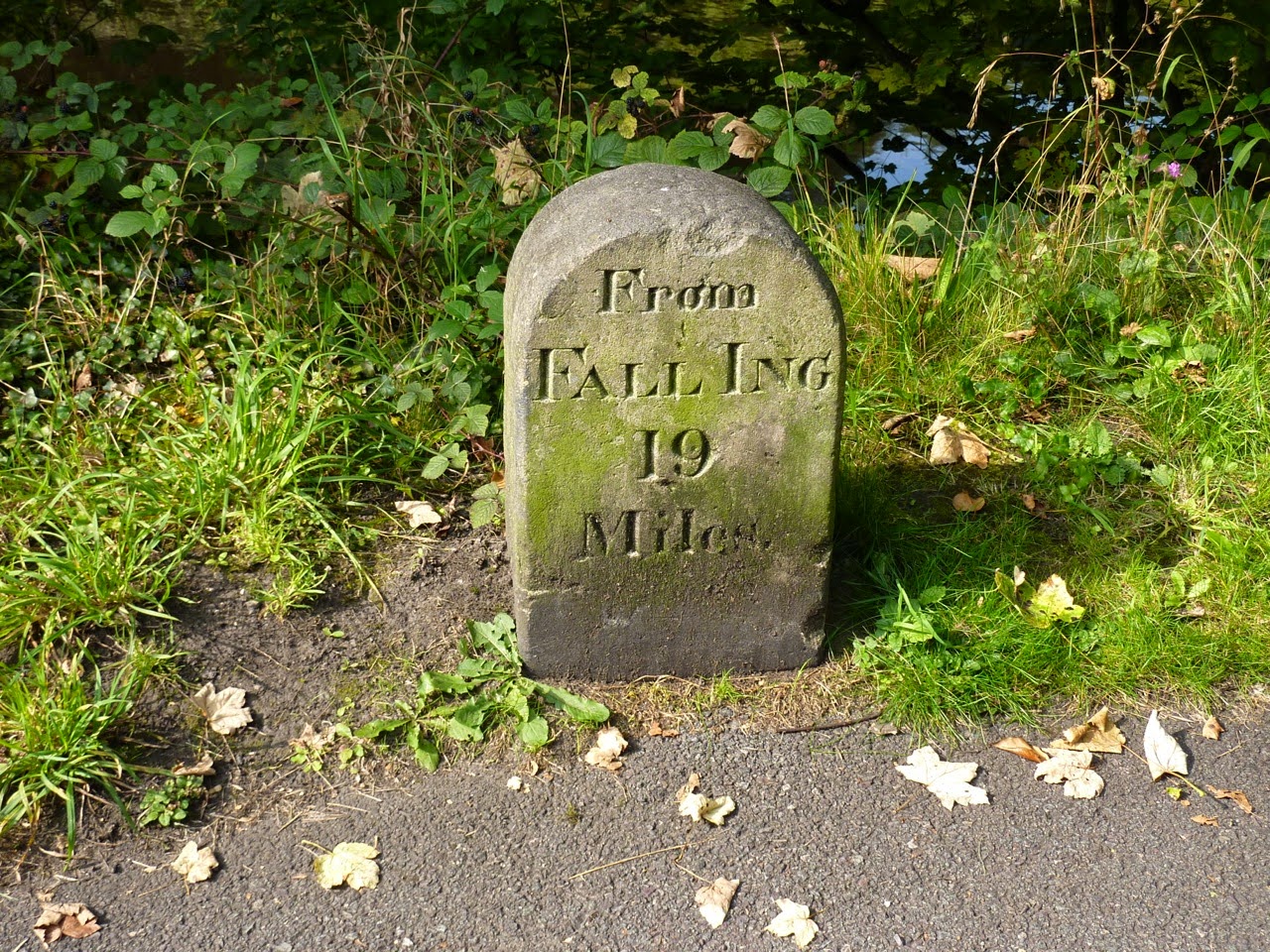 Also before and after each lock there is a marker stone that says 100yds. We spent a little while discussing why you would need a marker showing 100yds. We came to the conclusion that during the days when narrow boats were horse drawn the 100yd marker would give the boatman chance to slow the boat down or detach the horse. This conclusion could of course be totally wrong. If anyone knows the correct reason then feel free to put me straight.

After about two miles we passed under the Copley viaduct carrying the Caldervale line between Sowerby Bridge and Halifax and connects with the Manchester to Leeds line. This exceptional viaduct was constructed between 1852 by Sir John Hawkshaw. It has 21 arches at a height of 66ft. It is Grade II listed. The line between Sowerby and Halifax is only a short arm and due to the massive expense of the viaduct and the tunnels it almost didn’t go ahead. 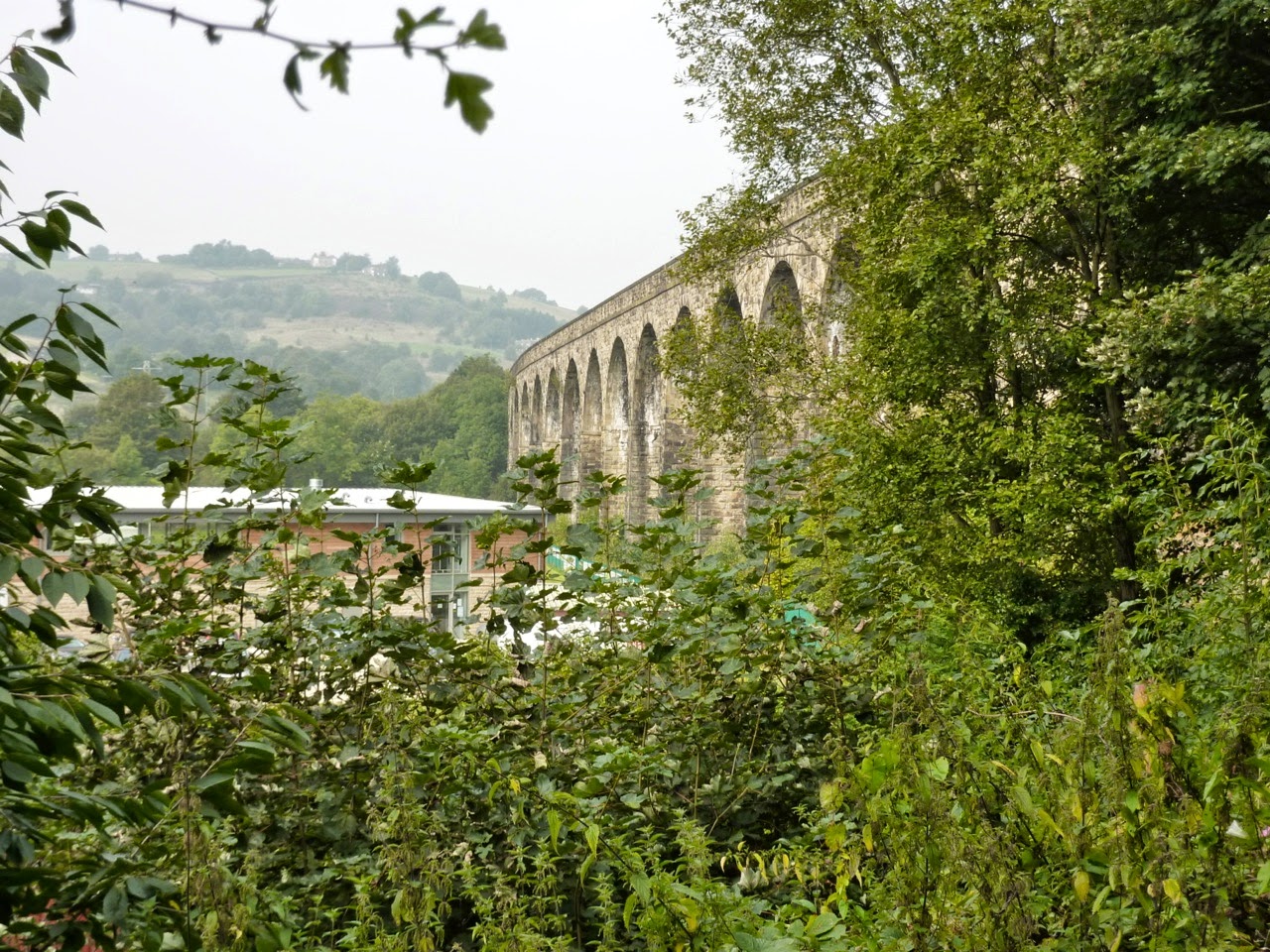 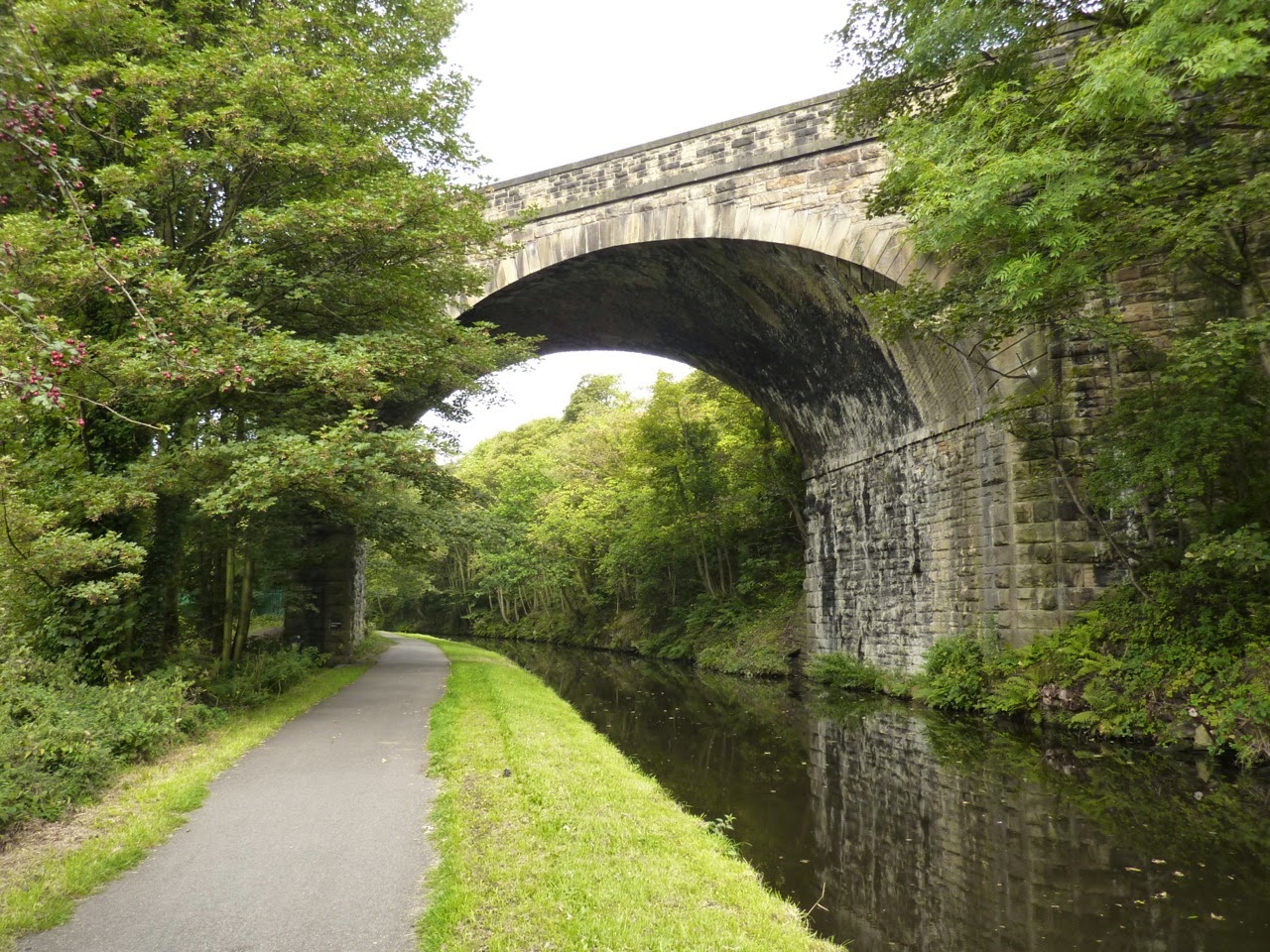 The Copley Viaduct.
Note the Skew brickwork of the archway roof below. 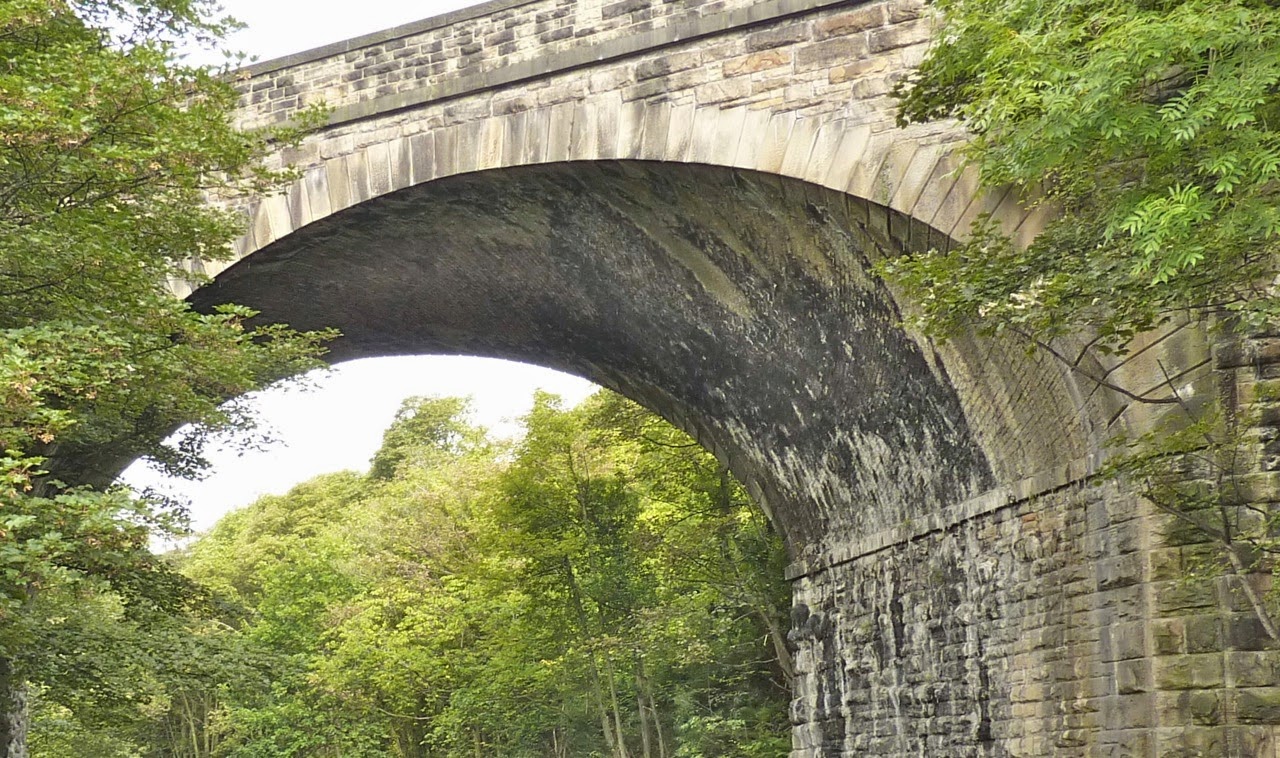 As we walked we saw plenty of birdlife. Mallard, Canada Geese, Coots, Moorhen, Heron, Magpie, Jay, Buzzard,Pied and Grey Wagtail and along the Cromwell section we actually saw a Kingfisher. This was my first sighting of a Kingfisher. We only got a couple of seconds view before it disappeared into the reeds. No chance for a photo unlike the docile Mallard Cross Ducks below. 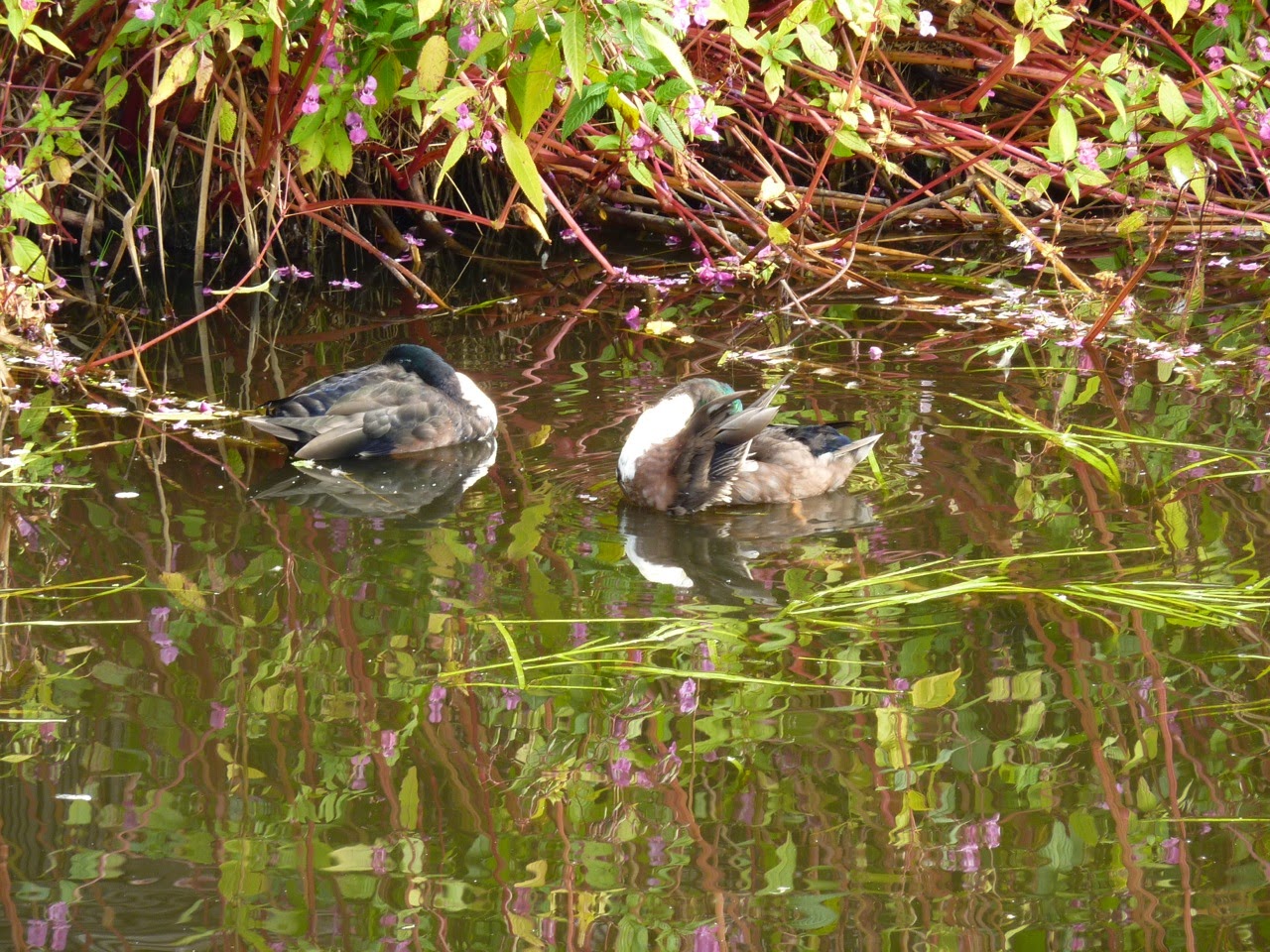 The day was warming up nicely and the mist of earlier had cleared leaving us blue skies and a windless walk. A few people were picnicking along the locks and soon we reached the pleasant Salterhebble bend with it’s lock and upper and lower basin. Here a branch of the canal turns towards Halifax 1.75 miles long, but it is now disused, abandoned in 1942. We carried on following the Hebble. The locks on the canal are regarded as being short and although wide boats can navigate through, the longest length of boat is only 60ft for a narrow boat and 57ft for a wide beam. 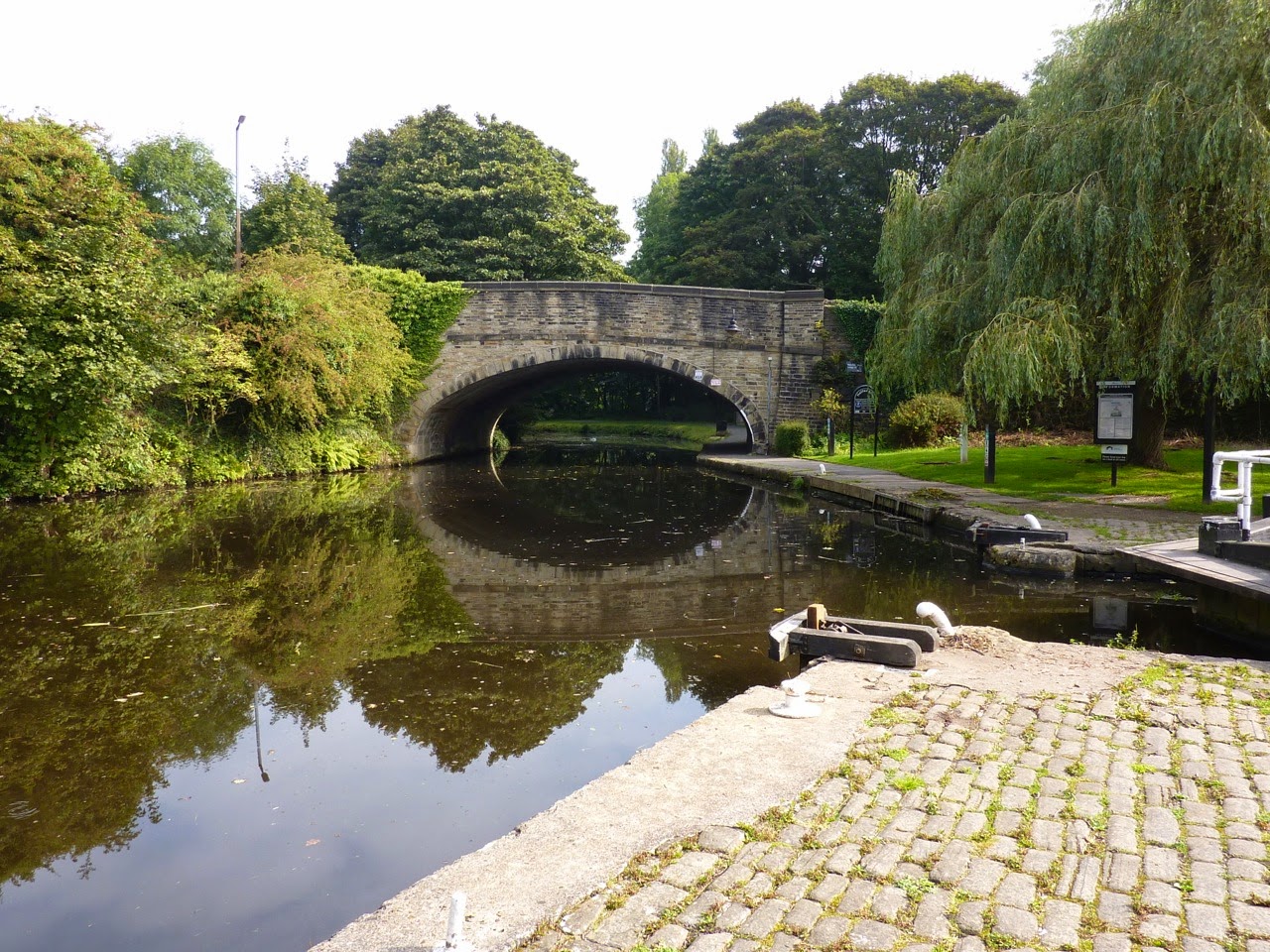 Under the bridge, The Halifax branch of the canal, now abandoned. 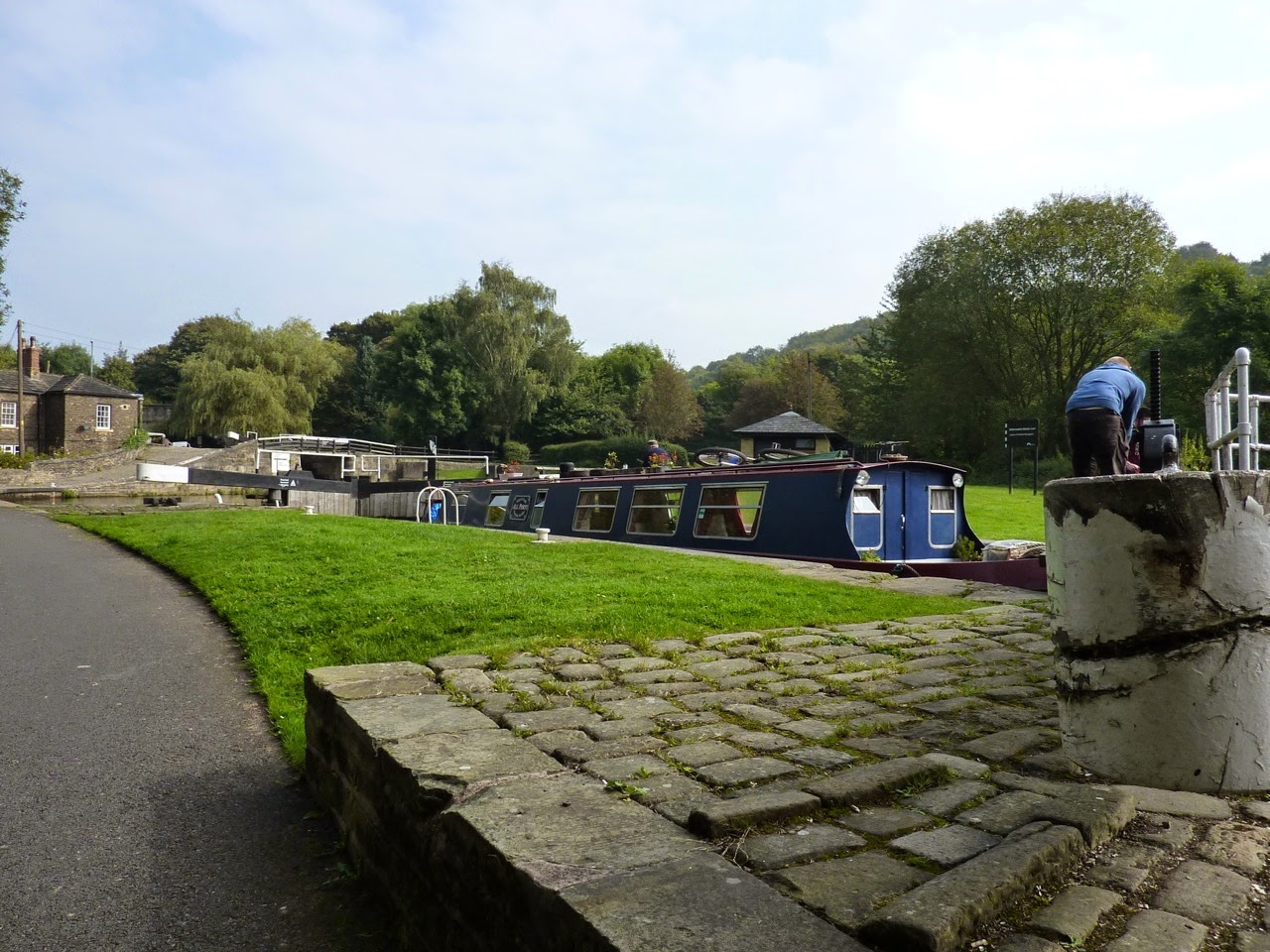 A Narrow boat in Salterhebble lock. 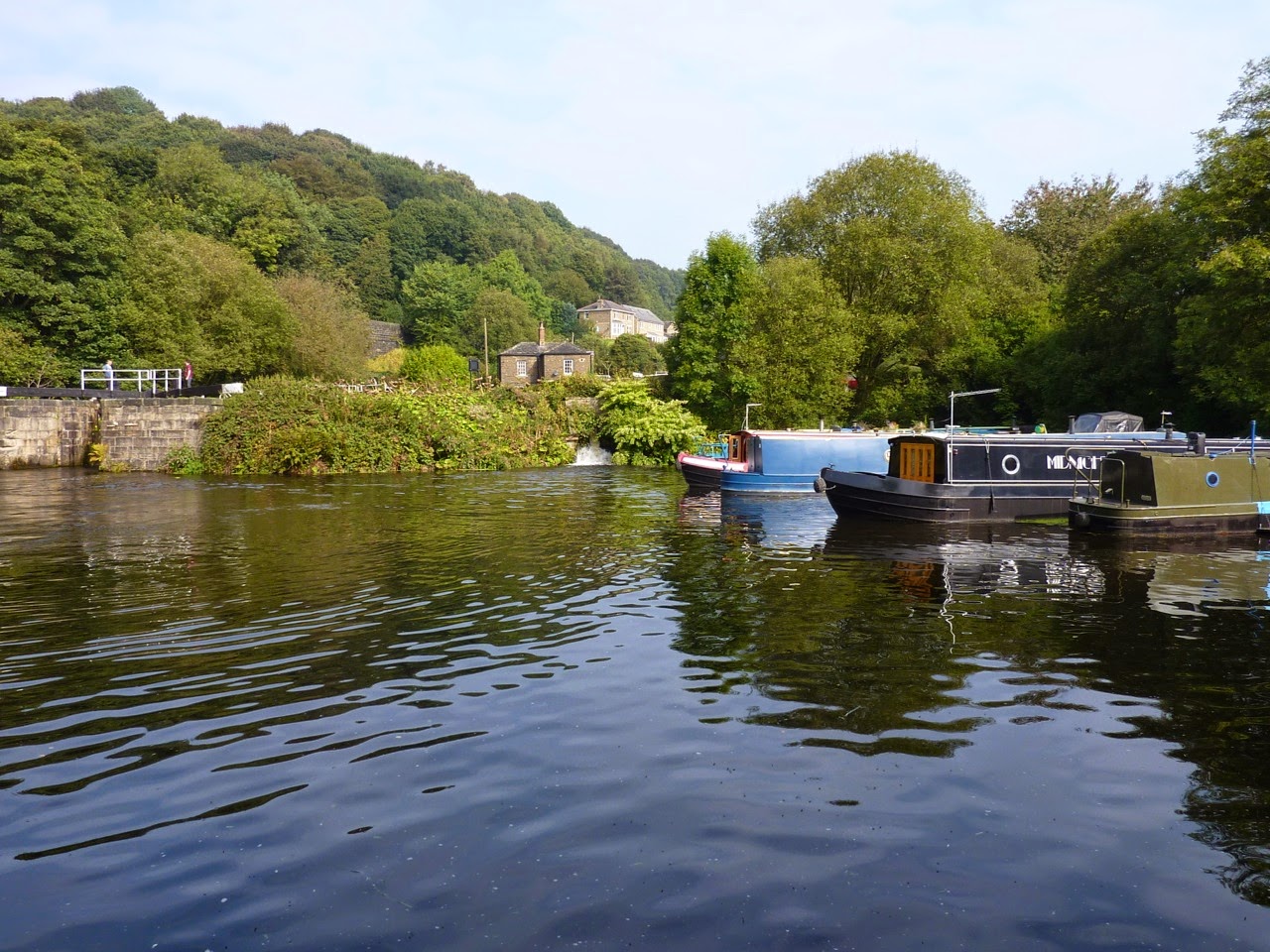 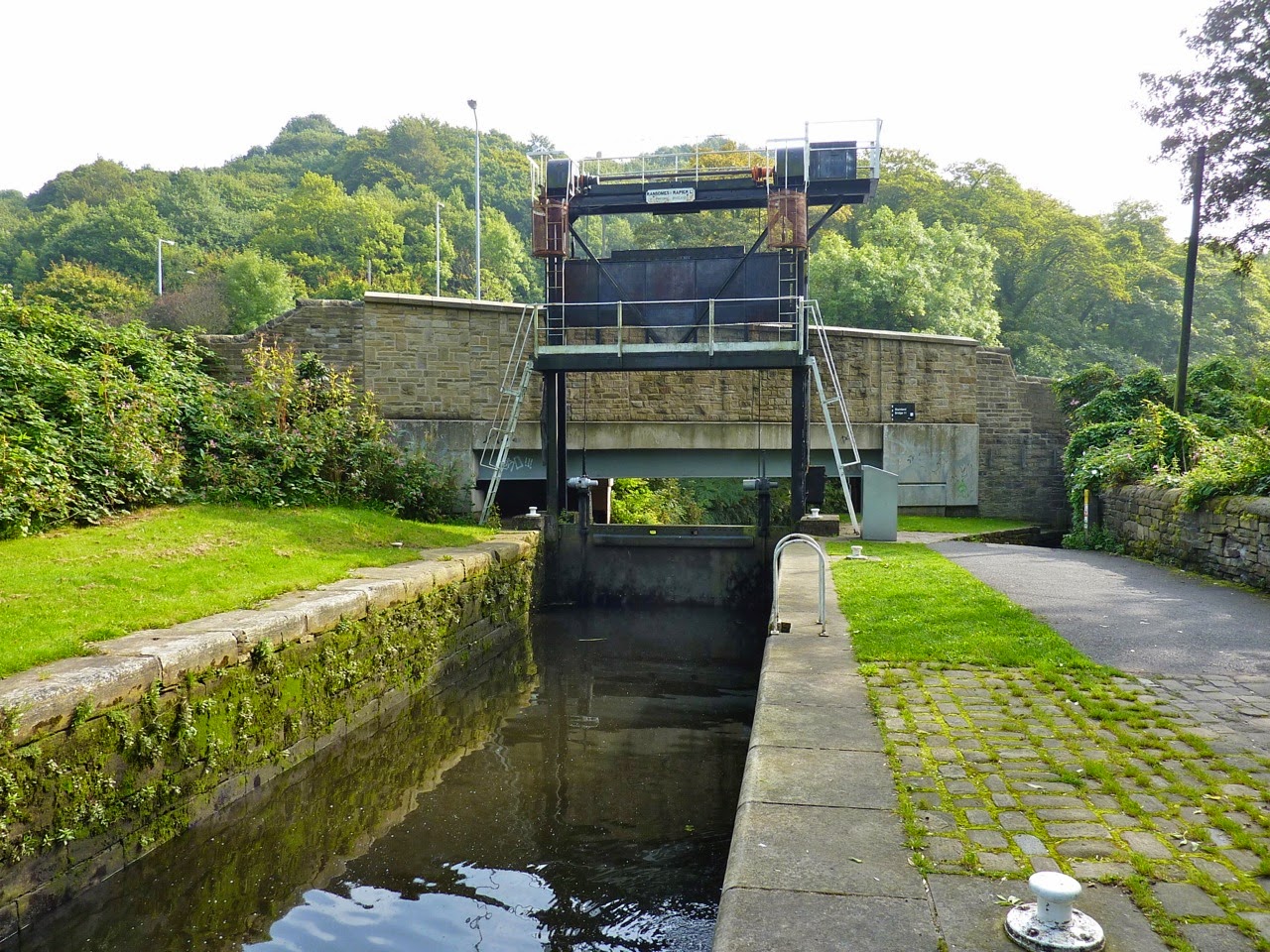 Just the other side of the guillotine lock is the horse tunnel with its new gate. It is underneath Stainland Rd bridge. 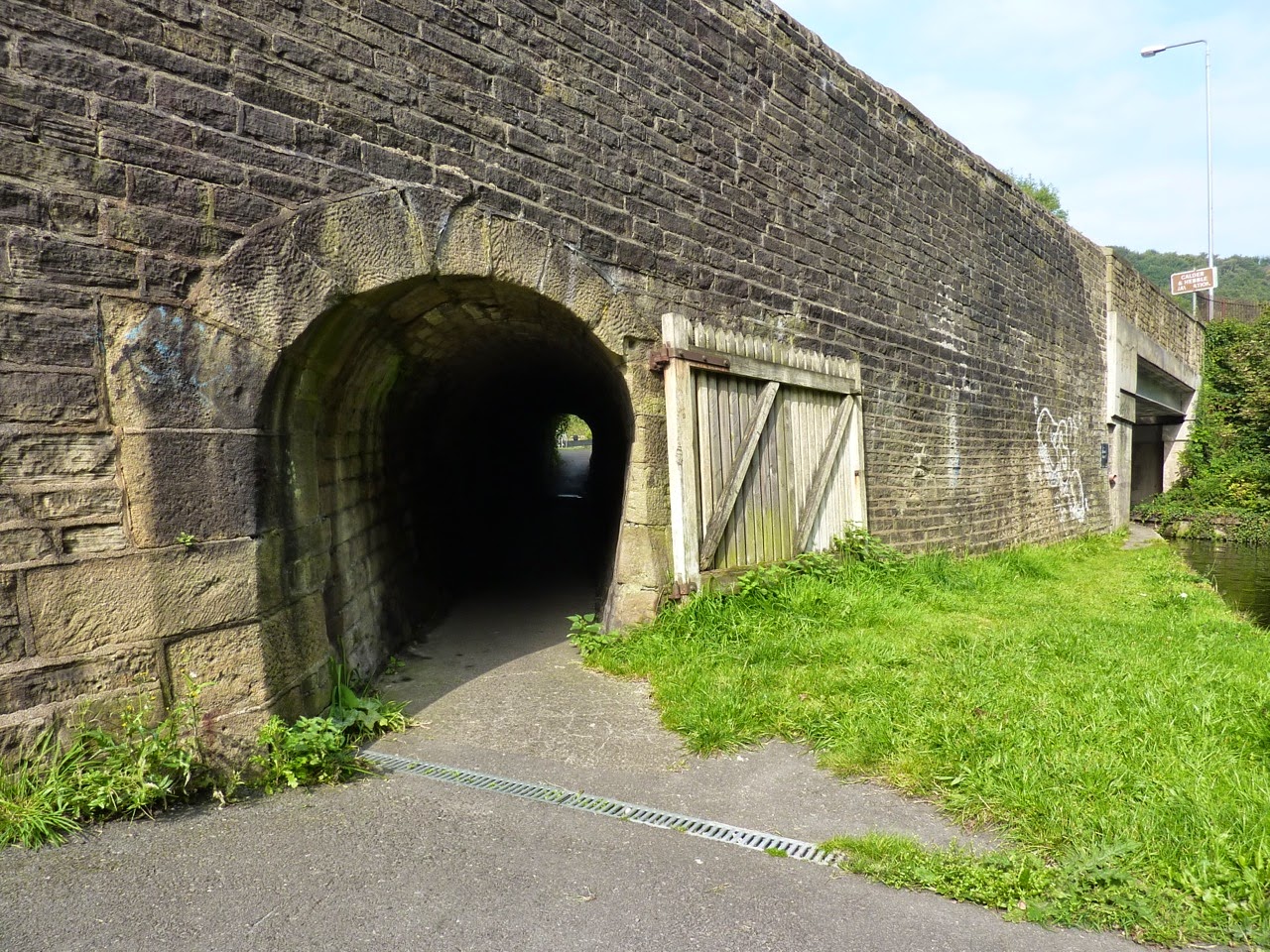 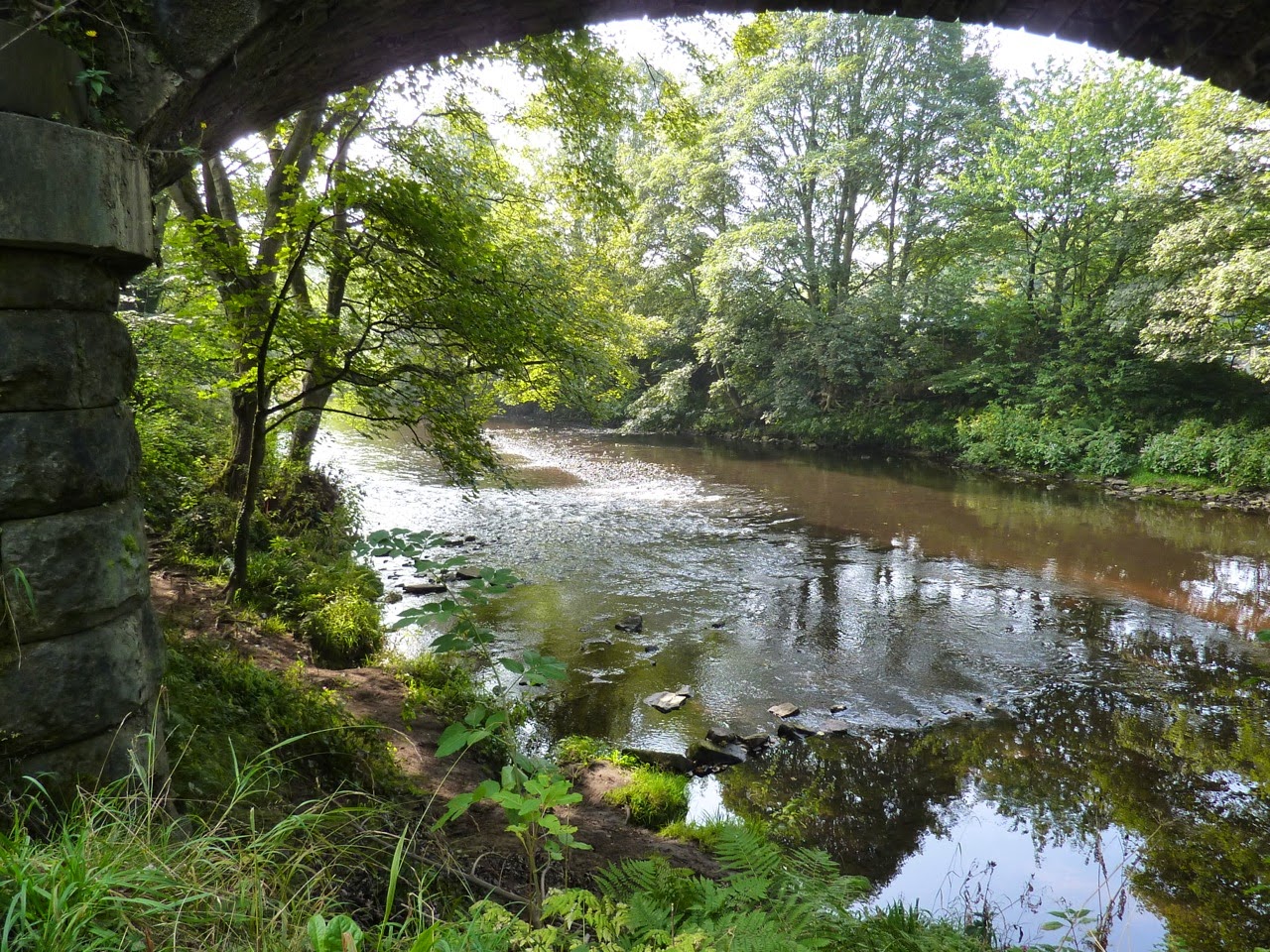 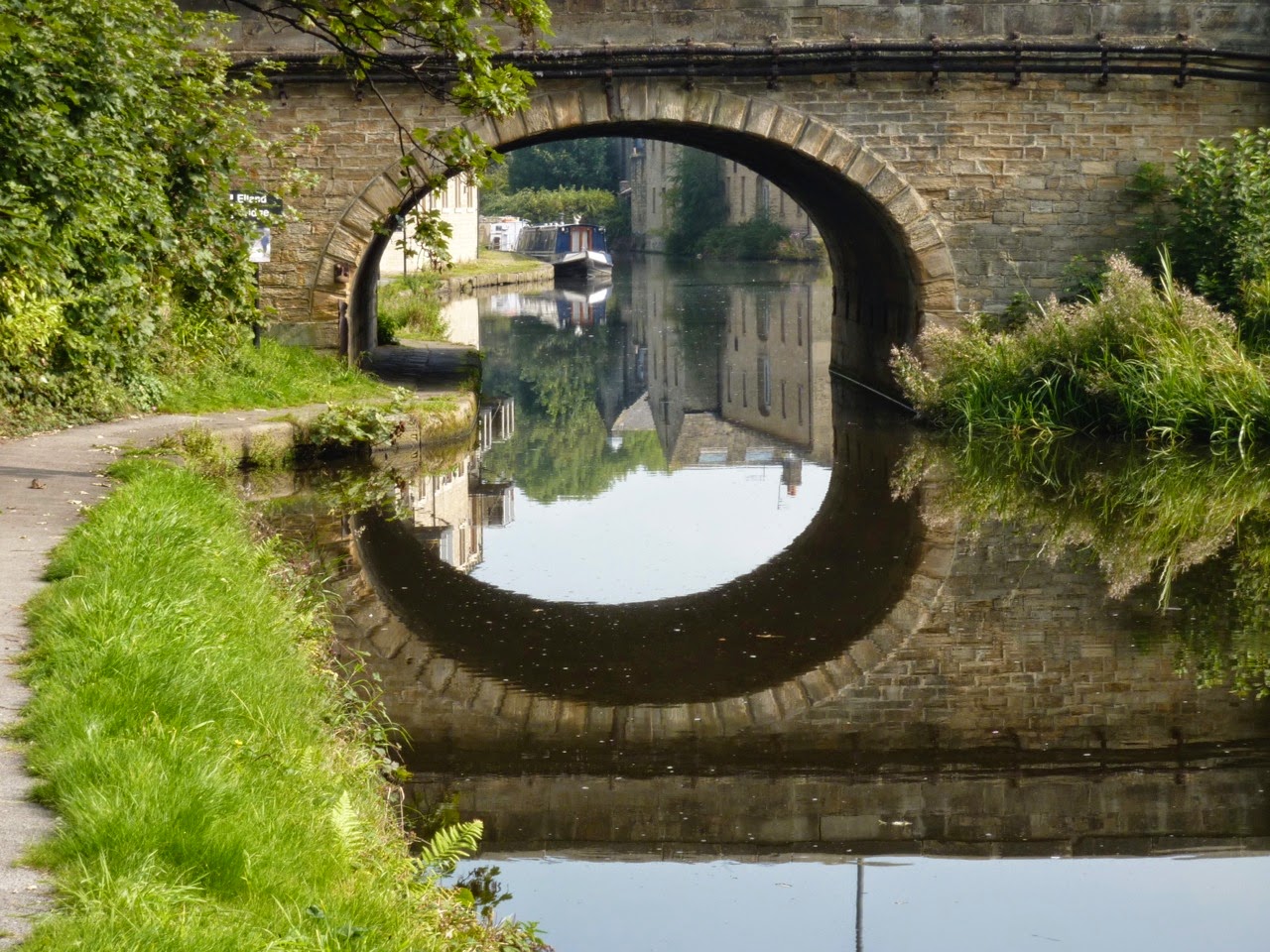 As we approached Elland Bridge and the basin on the otherside we spotted a pub called the Barge and Barrel. Unfortunately we were just a bit too early for it to be open which was a real shame as it is a micro brewery. It would have been a good time to have some refreshment as Terry was obviously suffering at this point. But it wasn’t to be. As we moved off the tow path ends and in our distracted state we missed the sign that said the route goes over the bridge to the other bank. 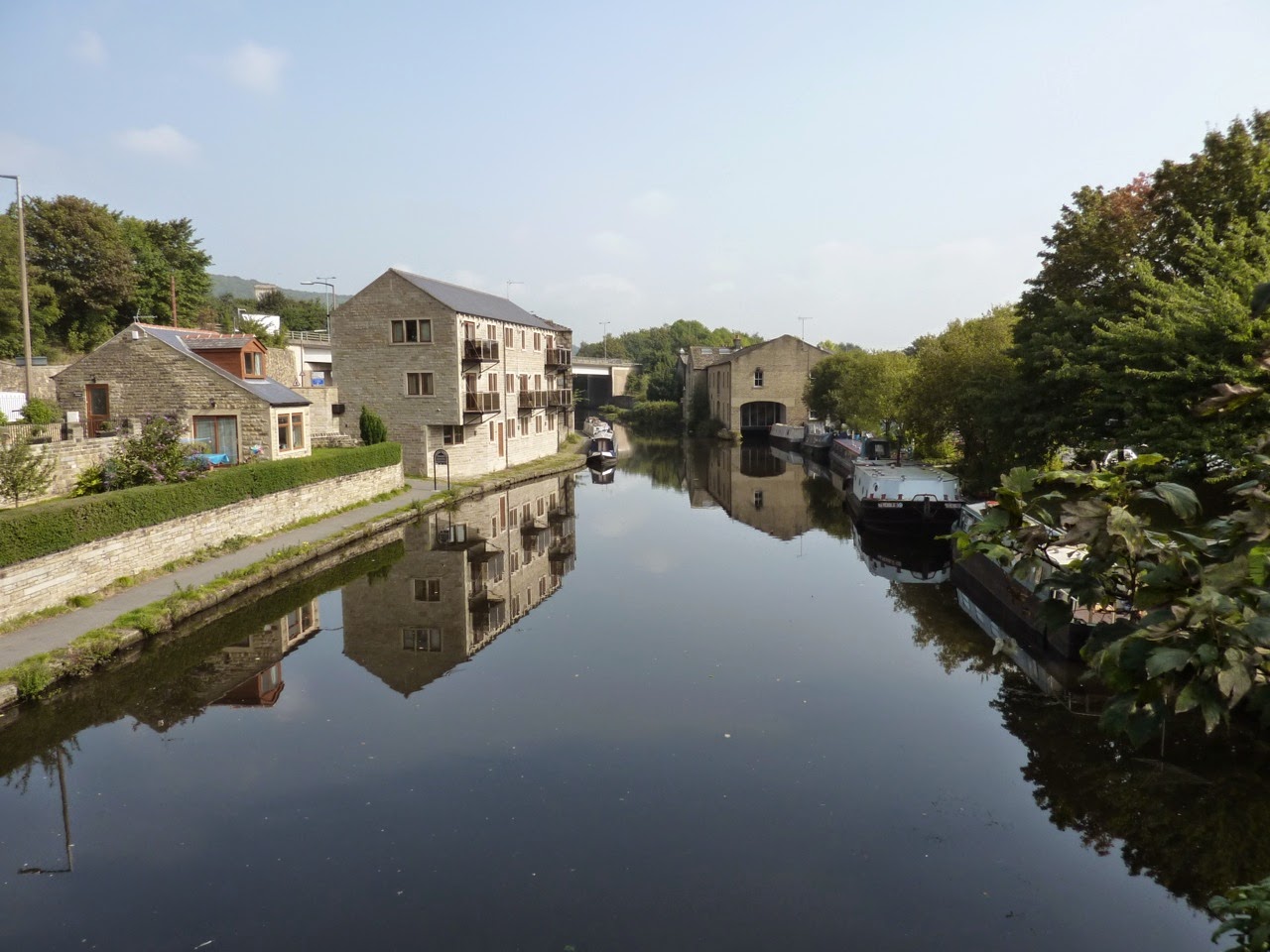 Mistake corrected we headed over Elland canal bridge and just prior to taking the towpath again i decided to walk up to the River Calder bridge for a photo. 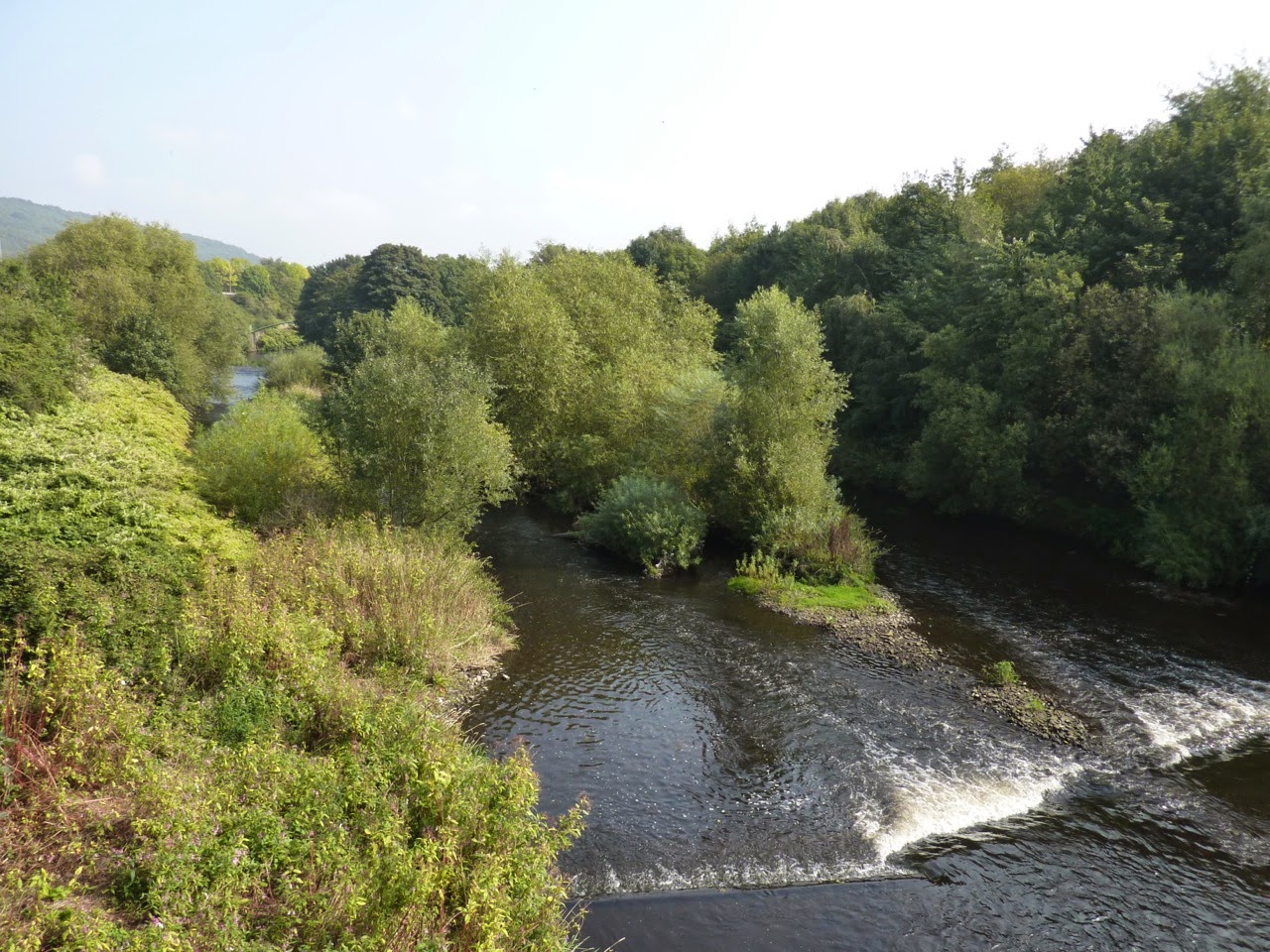 The River Calder at Elland 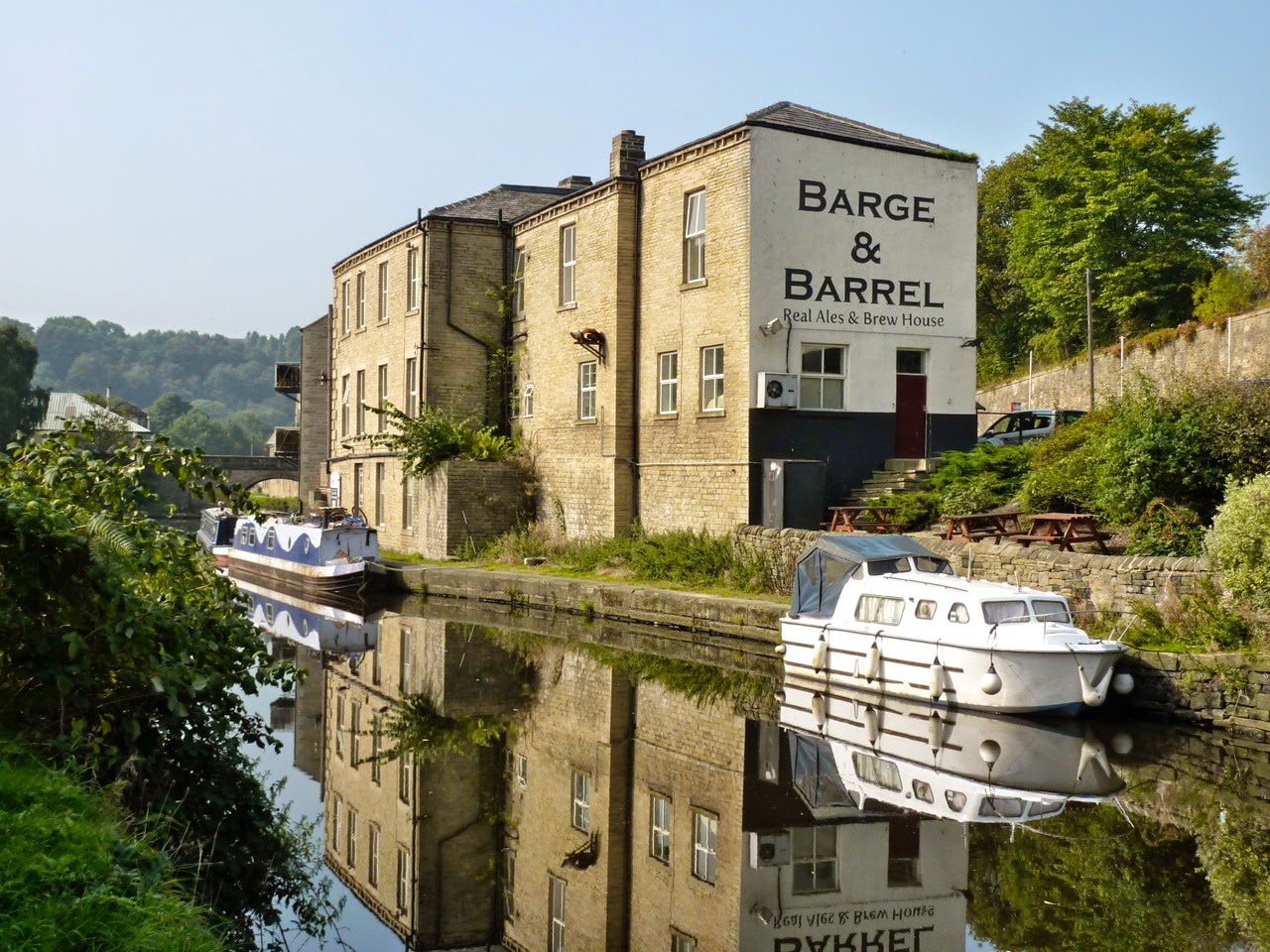 The pub was not open, we were too early. 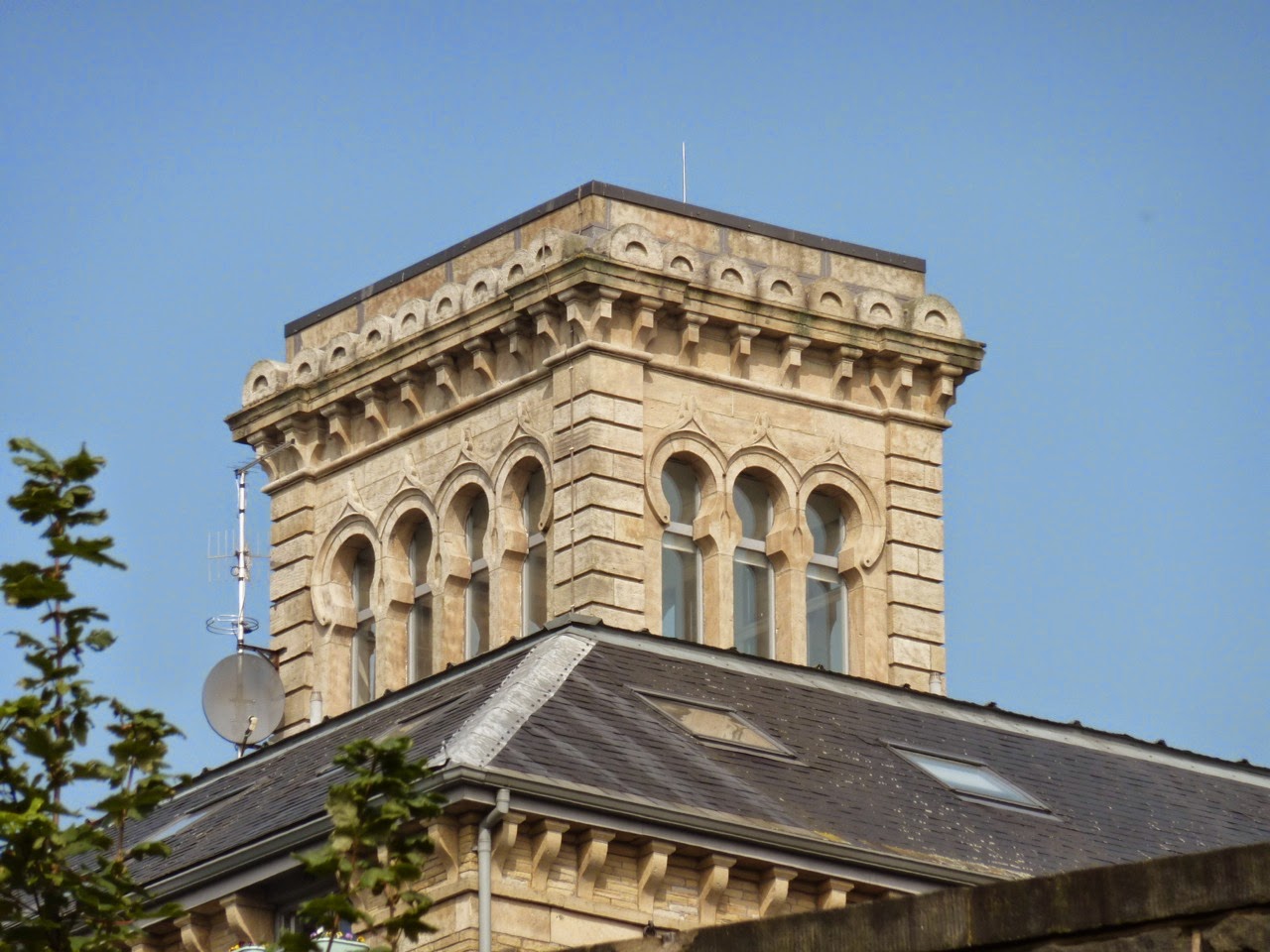 Passing the old Valley mill it was good to see the neat job of restoration which had been achieved in turning it into apartments. The original tower of the mill was looking good and showed the extravagance of the old mill owners. 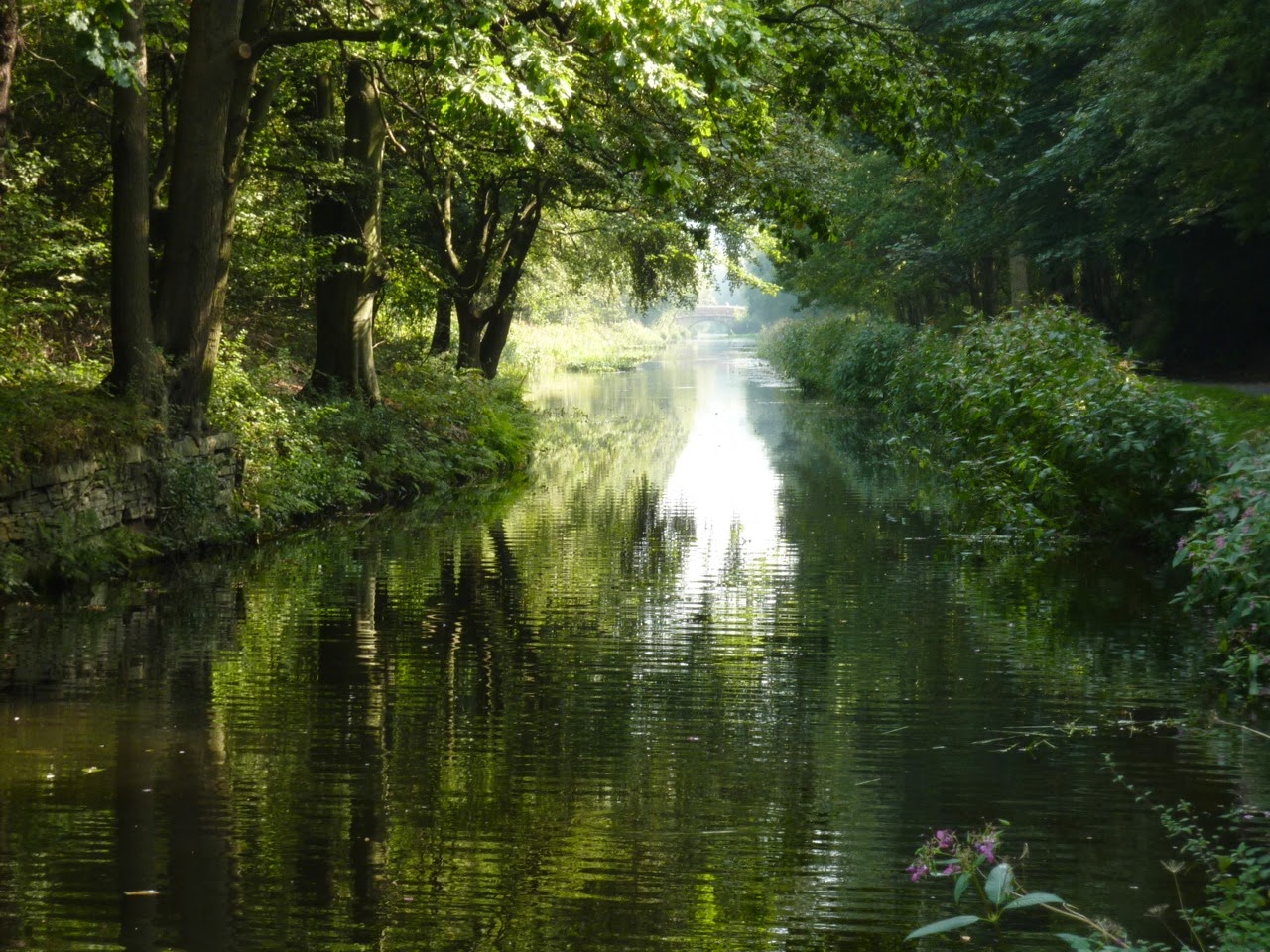 Between Elland and Brighouse, is Binns wood and the walk is superb, here the canal takes on the hue of a slow moving river. The banks are not harsh stone and the signs of nature are everywhere. We passed alongside Cromwell Bottom (Great name) nature reserve and then came up to Park Nook Lock and Elland Lock where there is still what’s left of the Lock keepers cottage. Its looking sad and unloved today. 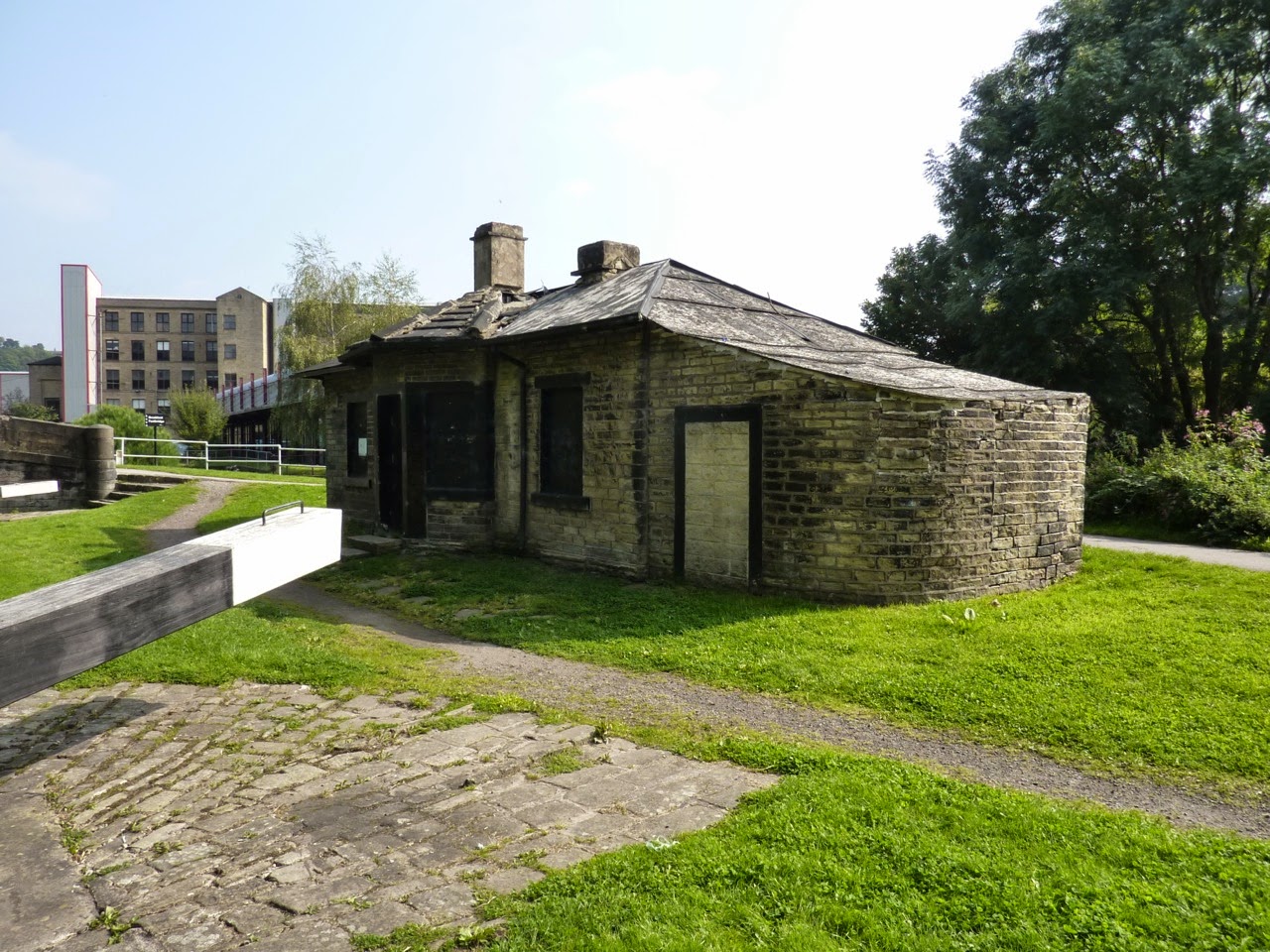 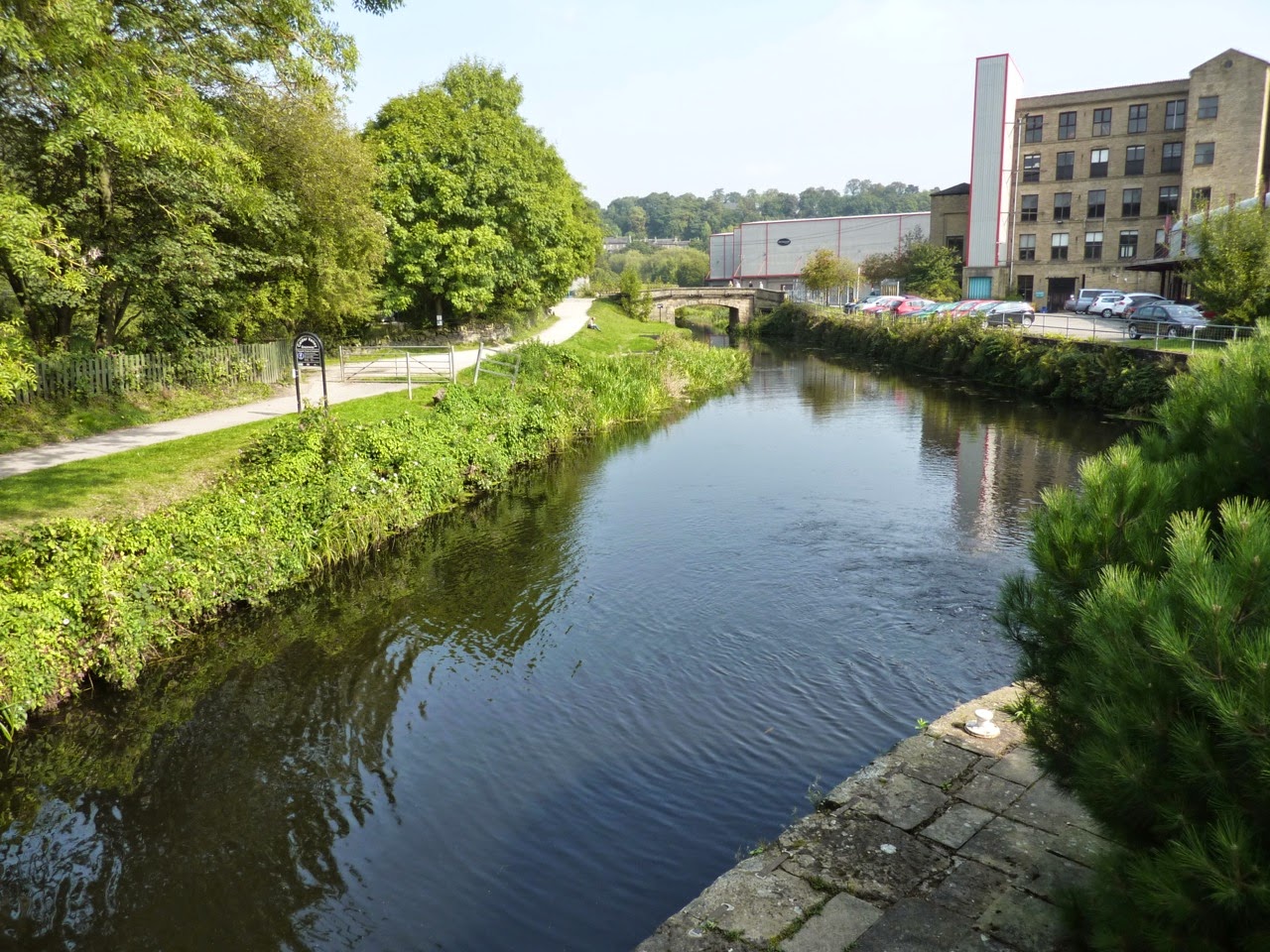 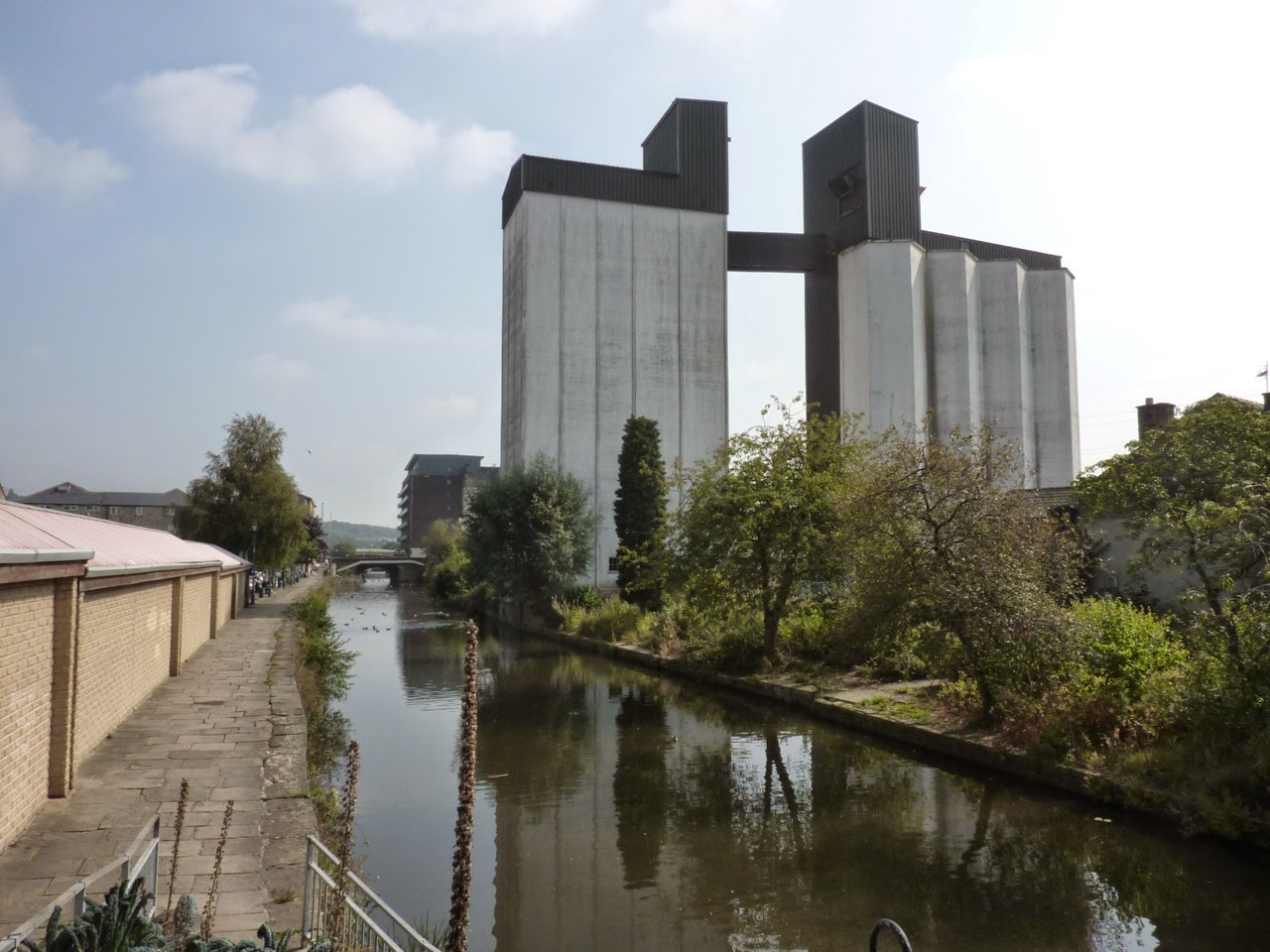 The eyesore building that marked Sugdens flour mill, i think it is now empty. It also marked the end of our walk. Although we ended this trip early it was certainly an enjoyable walk and one i will do again. We walked 11.3km in a sedate 3 hours.

What a lovely looking walk Alan. As usual, superb photos.

Hi Dawn, Yes it was. I really enjoyed it. Glad you liked the pics. Thanks.

The flour mill looks like an interesting bit of architecture in your photo. Looks like a good walk - I enjoy the canals myself, always something to see.

It is, although it sticks out like a sore thumb against the back drop. I don’t mind canal walking for reasons like yourself, there is always something interesting around each corner. (Not as good as your coast walk though.) Well done.