A puddle and a Dow

Getting the Scarp II pitched late on Saturday afternoon was a wind swept affair and i decided to use the cross over poles to avoid any potential strong wind deflections during the night.
As it happened, as soon as the tent was up the wind died to nothing and didn’t re-appear again for the rest of our stay.
The purpose of our trip up to the Duddon valley in Cumbria had nothing at all to do with walking, more to do with socialising, drinking, eating, music, fund raising and drinking some more. You know the way it is, oh there’s thingy, not seen you for ages, can i buy you a beer and then, well it would be rude not to reciprocate and so before you know it the beers are lining up and the small wee hours are getting closer. 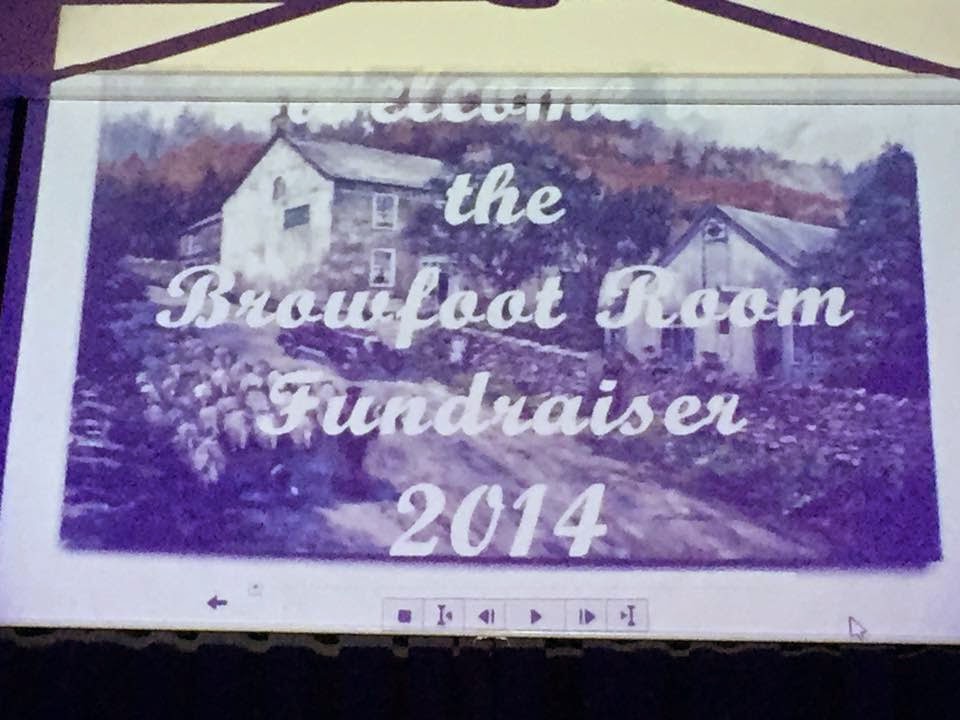 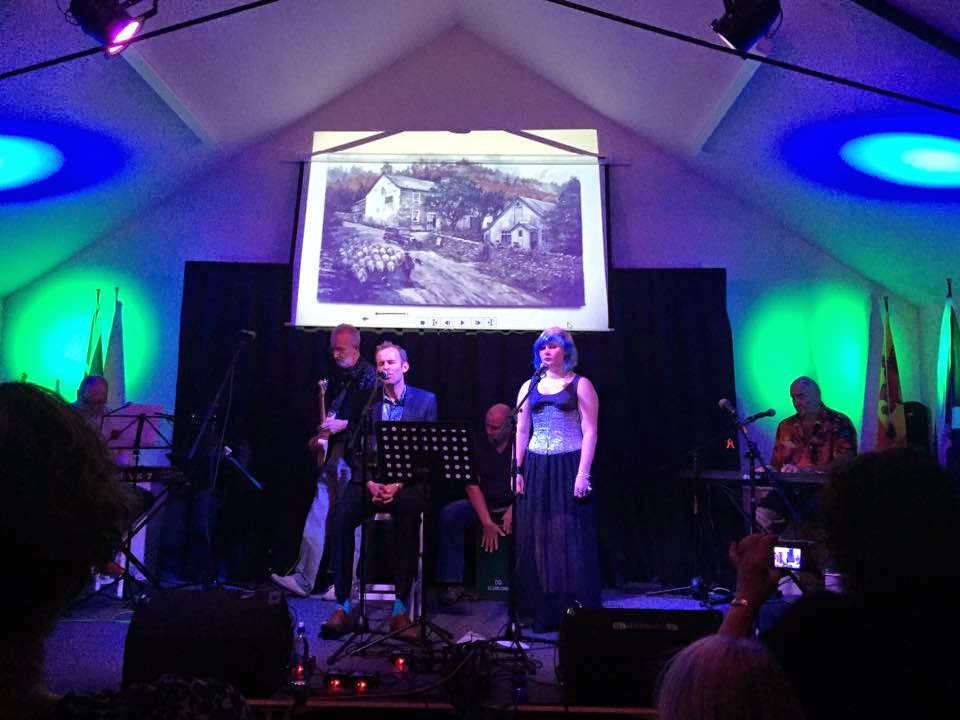 We awoke on Sunday morning rather bleary eyed and a tad de-hydrated and with a bit of a sore head.
When i spoke to our hosts Anthony and Hillary at Turner Hall Farm it seems we were not alone with the Paracetamol treatment.

Anyway, we lay in our tent listening to the silence of the morning. Just the call from a lone high soaring Buzzard occasionally breaking that silence. It had been a very warm night and too warm to even sleep in my bag and an even warmer morning. We eventually pushed ourselves to get up and the walk i had planned for the day got very close to being put off. However, a bacon sandwich and a couple of cups of coffee convinced us to grab the day and get out.

Alcohol and walking are not good companions and for the first hour i felt very laboured and the beer was seeping through every pore. It was an incredibly humid day with not a breath of breeze. As we slowly made our way from Seathwaite village to Seathwaite tarn  the tops were becoming blanketed in mist. Along Caw and White Pike and along the ridge to Dow Crag there was an inversion. We spoke to a backpacker who had earlier spotted us and our tent and asked us a few questions about the tent. We had a number of people ask about it on the campsite later too. The backpacker was heading across the Walna Scar to Coniston where he would catch a bus and then a train home. 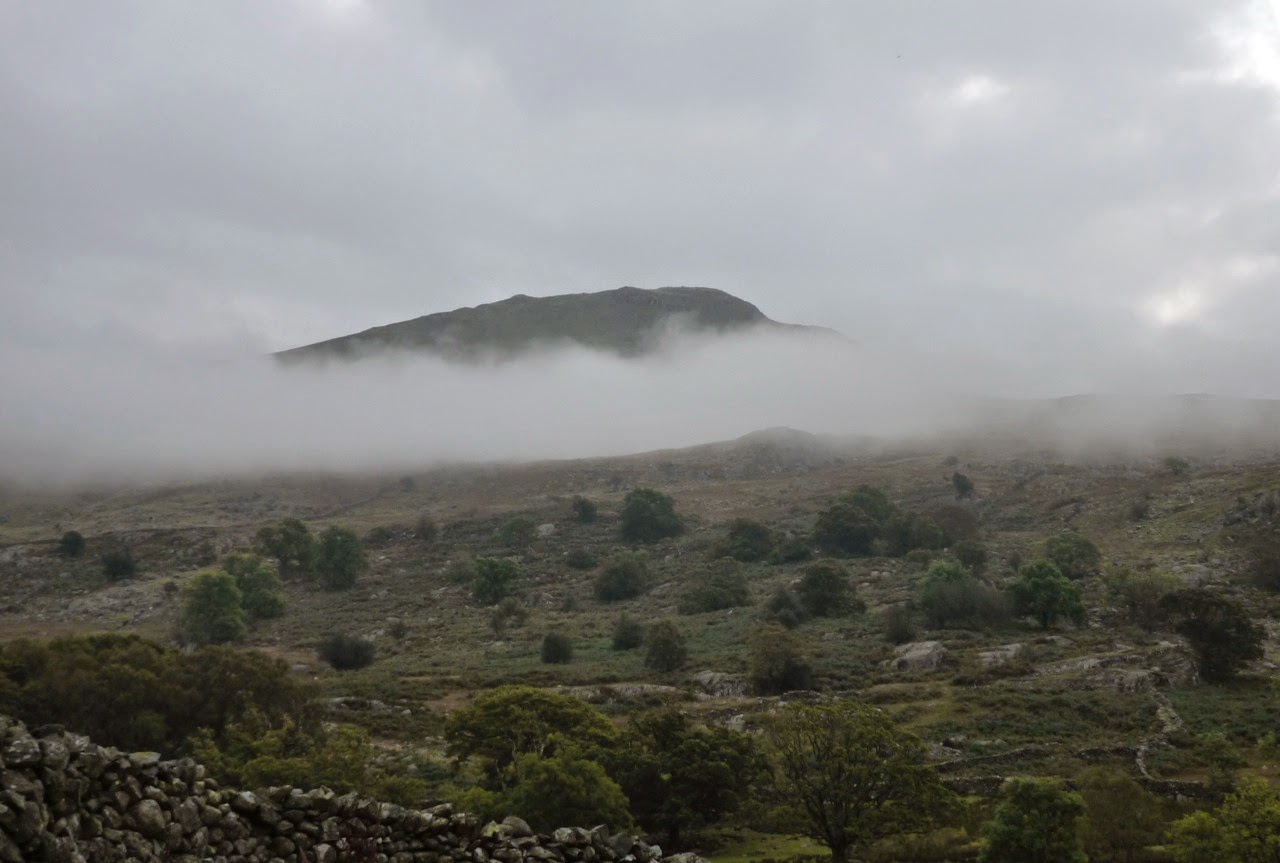 Temperature inversion at White Pike.
With only a thin baselayer between skin and rucksack i was surprised to notice just how wet with sweat i had become. I was dripping. By the time we reached the tarn dam i could have done with a change of top.
Mist was rolling over the Swirl How - Brim Fell ridge line, cascading down towards the tarn before turning back upwards to Grey Friar. It was an eerie silence and so atmospheric, it just needed a few flashes of lightening to finish it off. 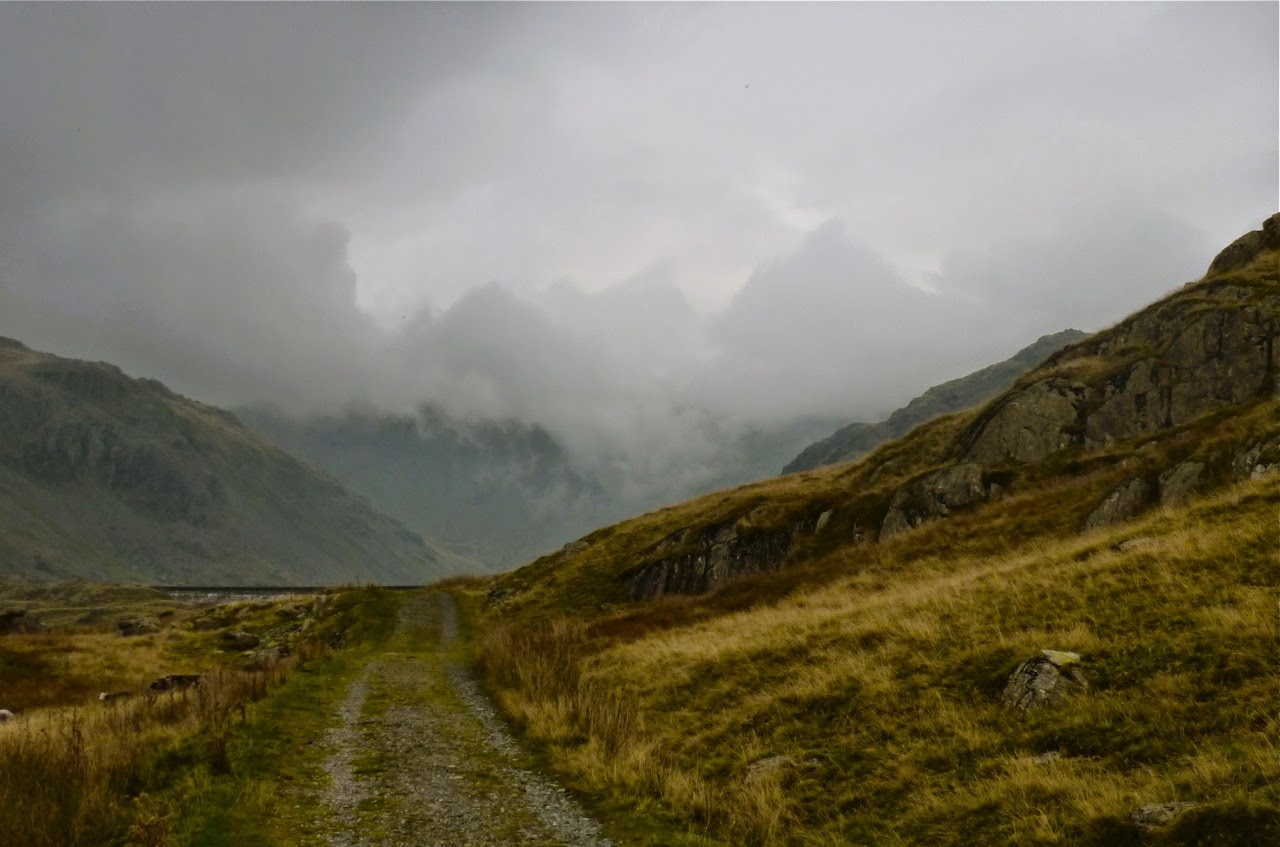 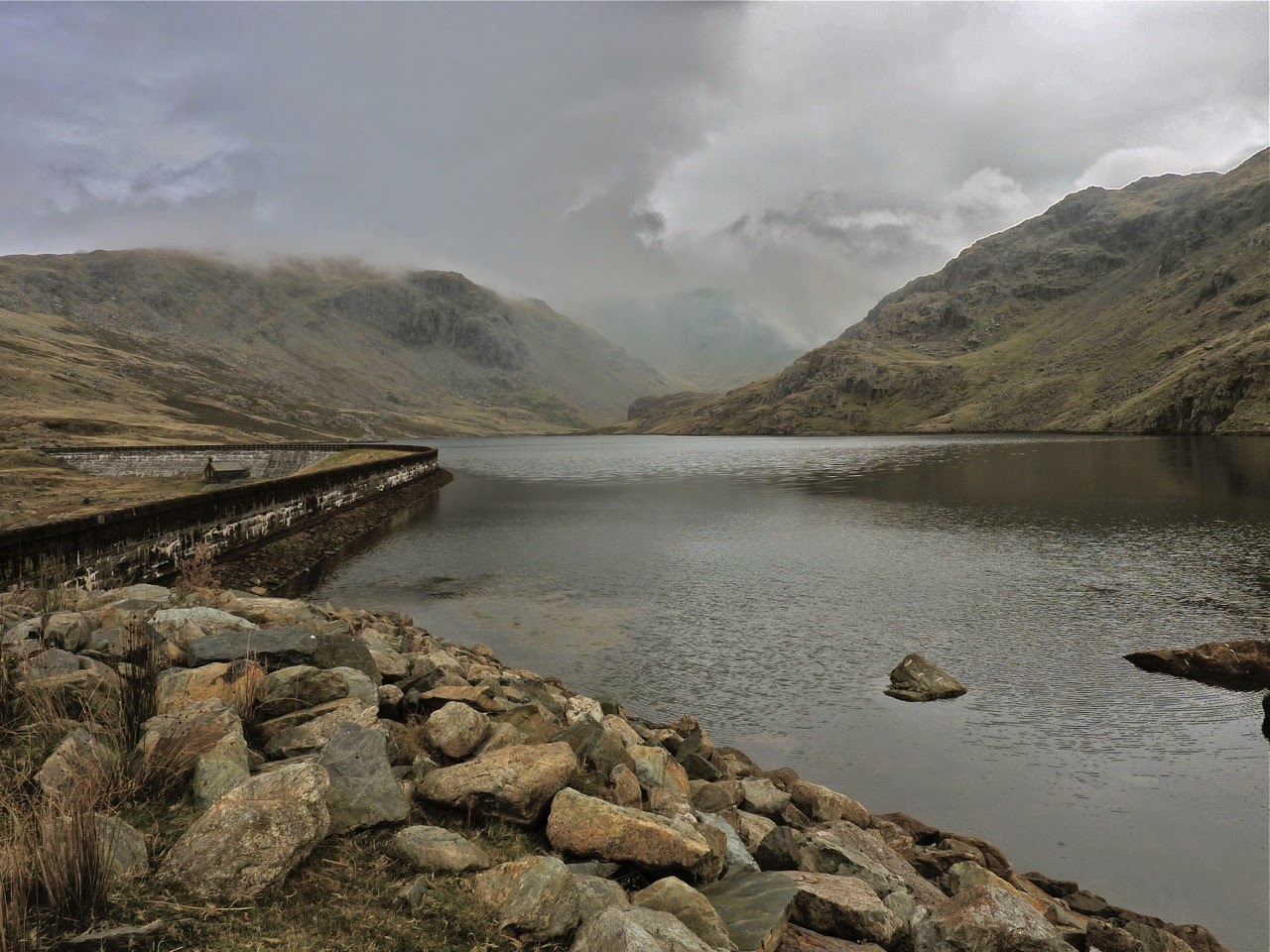 View of Seathwaite Tarn and cascading mist, the ridge line covered.
We didn’t go over the path across the dam wall but instead took the narrow path on the tarn’s right hand shoreline. We followed this until we met up with the first stream coming down from the crags on the right. The beck is called Bleaberry Gill and there is no path alongside either bank. We didn’t find any Bleaberry’s either.
From the shoreline the route looks very easy but in places it is a little tricky. Not for the person who has vertigo issues. Easier routes are possible but i wanted to stick with the Gill. 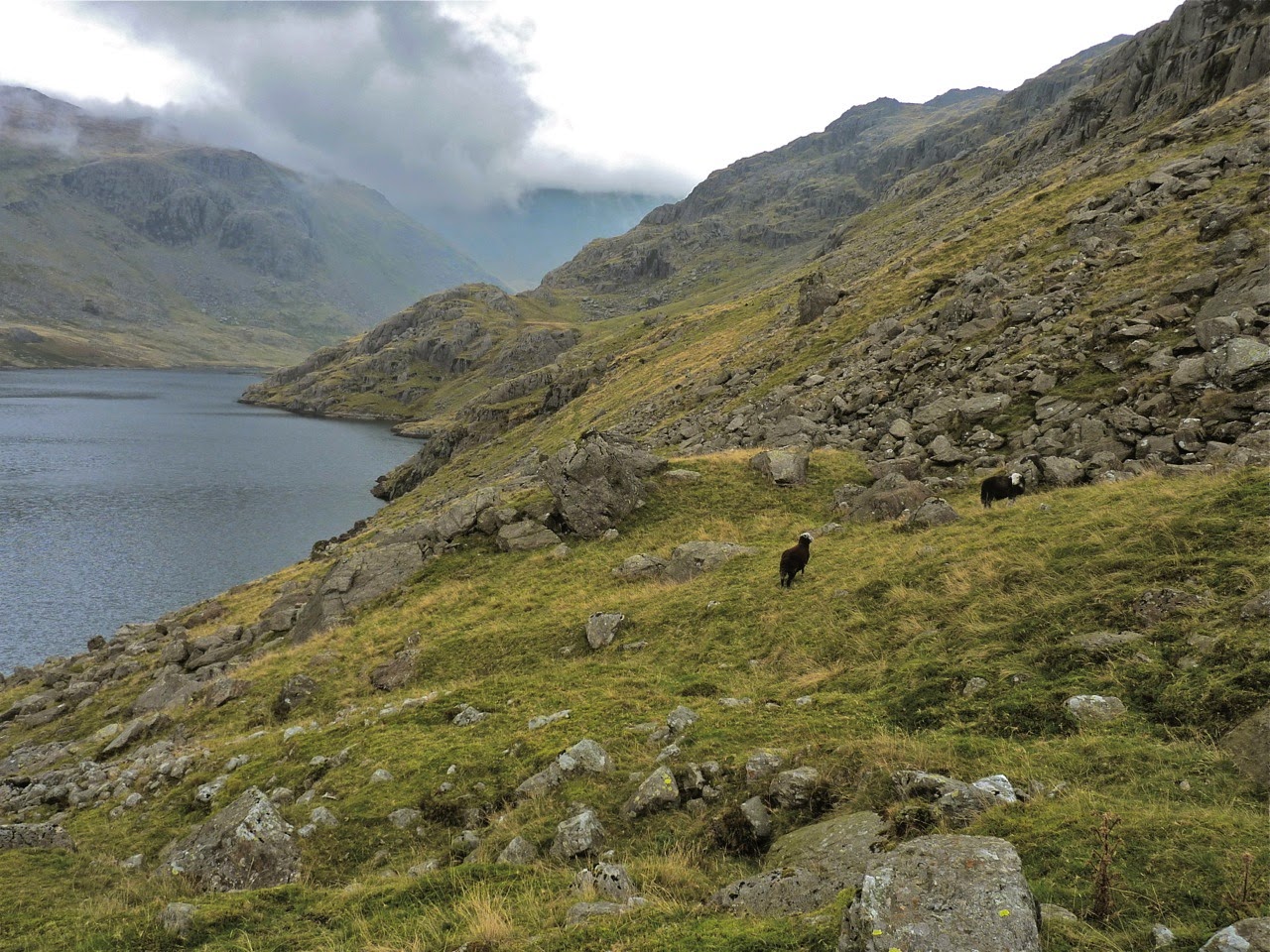 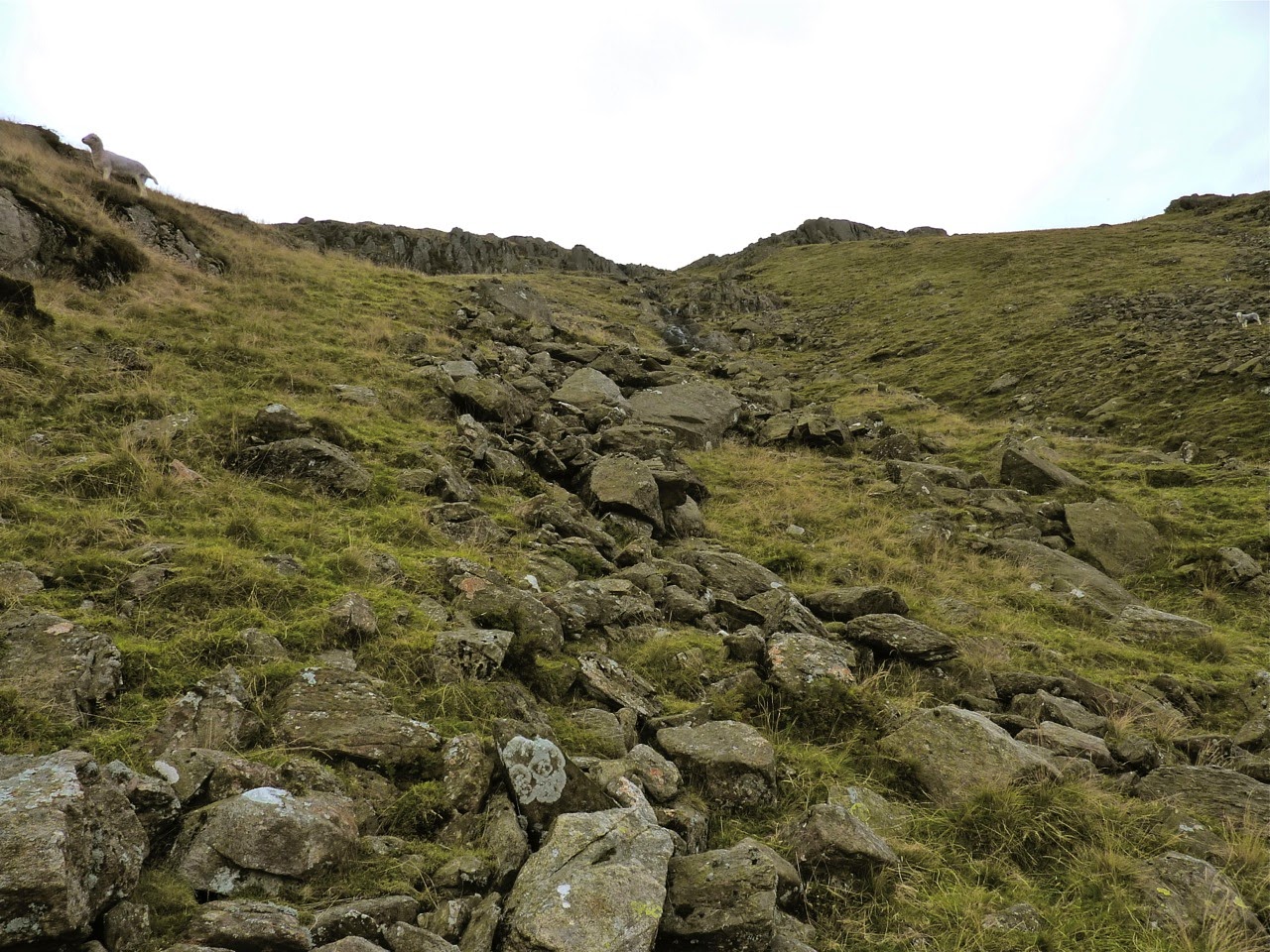 The route upwards follows the Gill 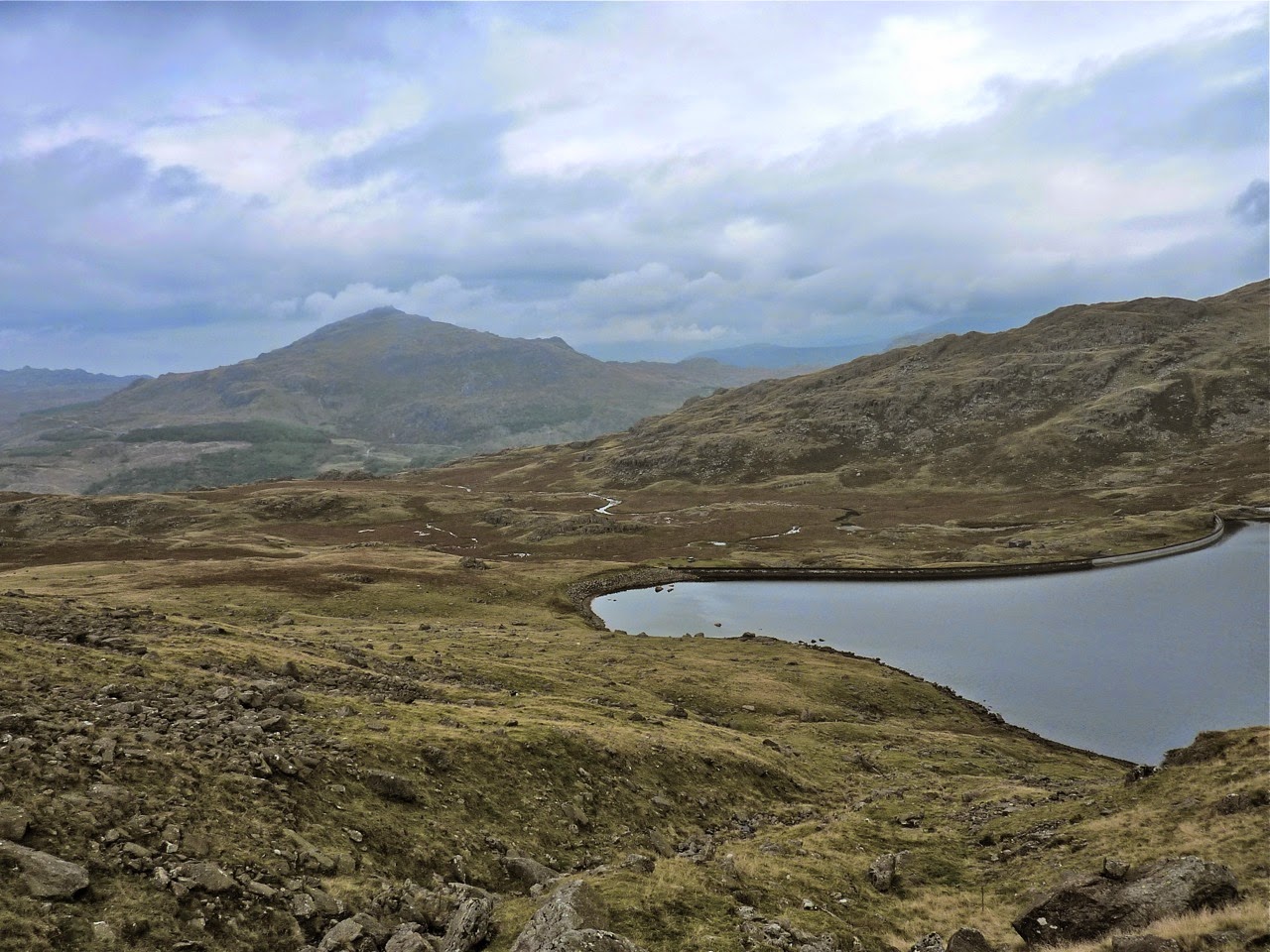 View taken from about 3/4 of the way up the gill across to Harter Fell.
With care we made it to the top of the beck and into the large catchment area which feeds the Gill. With all the dry weather we have had of late the ground was quite firm but i think it would be a rather boggy area after a period of rain. Today we had luck on our side and the moorland was quite pleasant.
We followed the Gill as one of the goals of todays walk was to go to the small unnamed tarn which lies between Bleaberry and Near Gill’s. I had never been to this tarn in all the years of coming to this area.
Looking at the map, if you follow the Gill to its source and then just continue in the same direction you should come straight to the tarn but in reality this is not the case. The upper reaches are made up of many small boggy drains rather than one channel and we headed off slightly more east than was necessary and that meant we had a longer route to get to the tarn. More circular.

Sheila was looking a bit tired and so it became a pleasure to come over a rise and see the tarn. It was a real disappointment. More a black muddy puddle and certainly not worth all our efforts and certainly not one to backpack to either. The gill on the other hand is clear water and a few pitching spots can be found. The views are excellent.

The Puddle.
At this point we had to decide what to do next. We couldn’t see the top of Dow but i knew it was only a short march upwards to it. Sheila was struggling a bit and so i suggested heading for the path which runs parallel to Far Gill and from there decide whether to go up Dow or head back down to Seathwaite Tarn.
She said “Just keep going straight up the front of Dow”. And so that’s what we did. A few short stops on route to regain our breath had us close to the craggy summit. It was covered in mist but it was drifting around. One minute you could see and the next you couldn’t.

As we scrambled to the very top of the crags we met our first walkers coming across the crags the opposite way. We let them past as they seemed in more of a rush than us. The back marker was not keen on going across the final craggy top and decided to opt for the easier route around a lower trod.

We sat on the top for a short period listening to the silence and watching the mist swirl in and out. The odd Raven glided past and let out that echoing croak as it disappeared into the gloom. The sound was bouncing around the crags and seemed very strange when visibility disappeared. 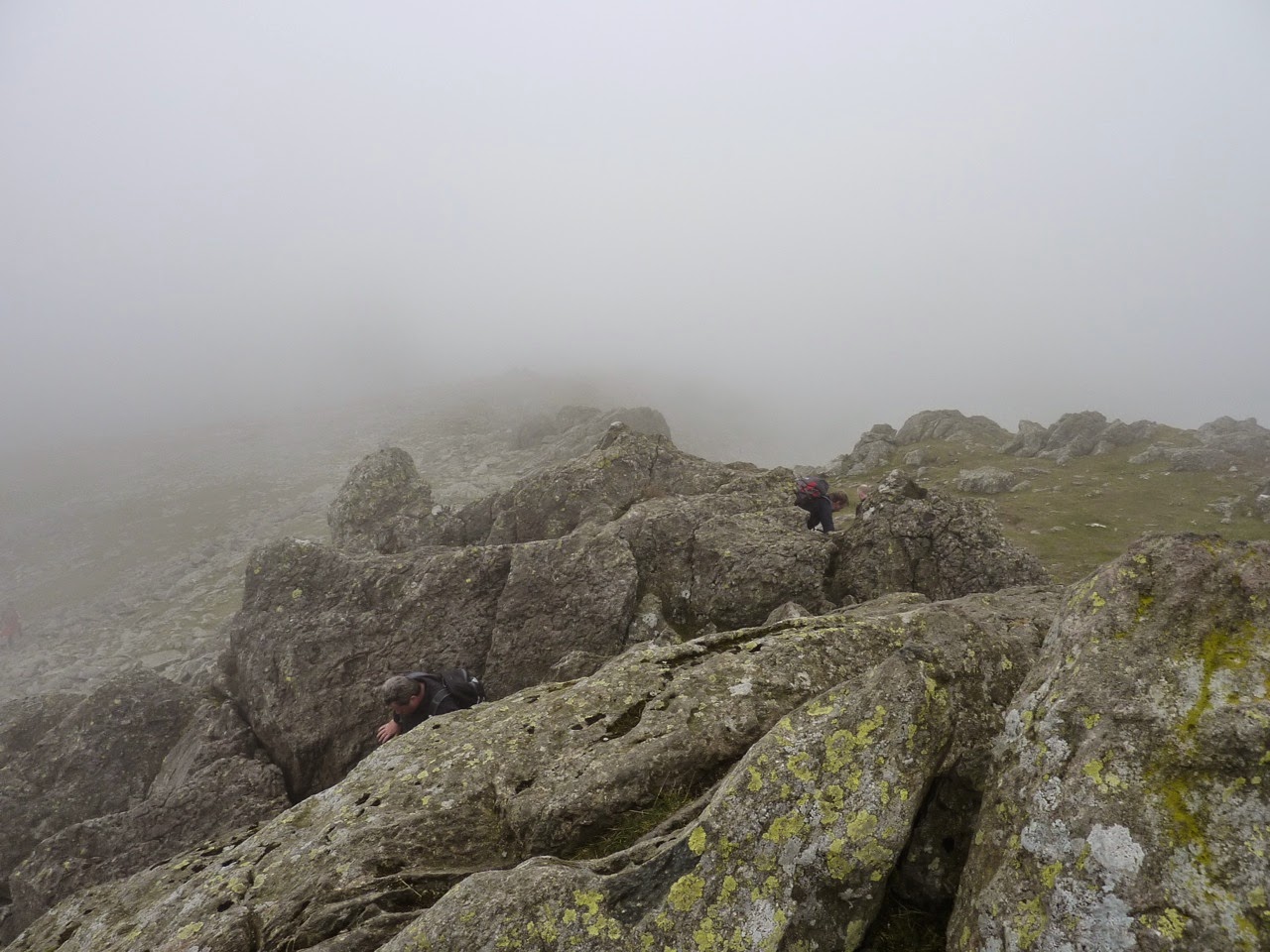 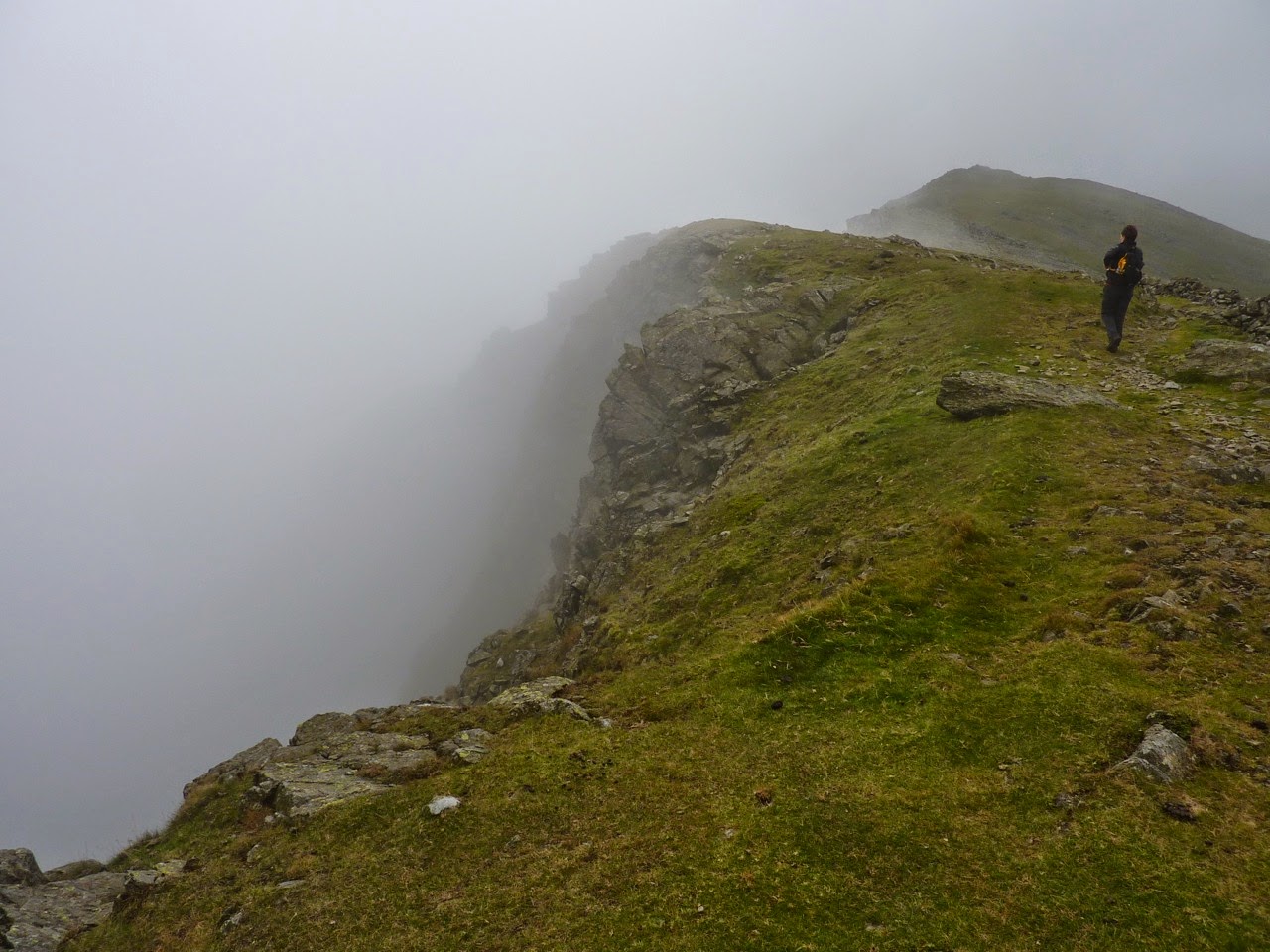 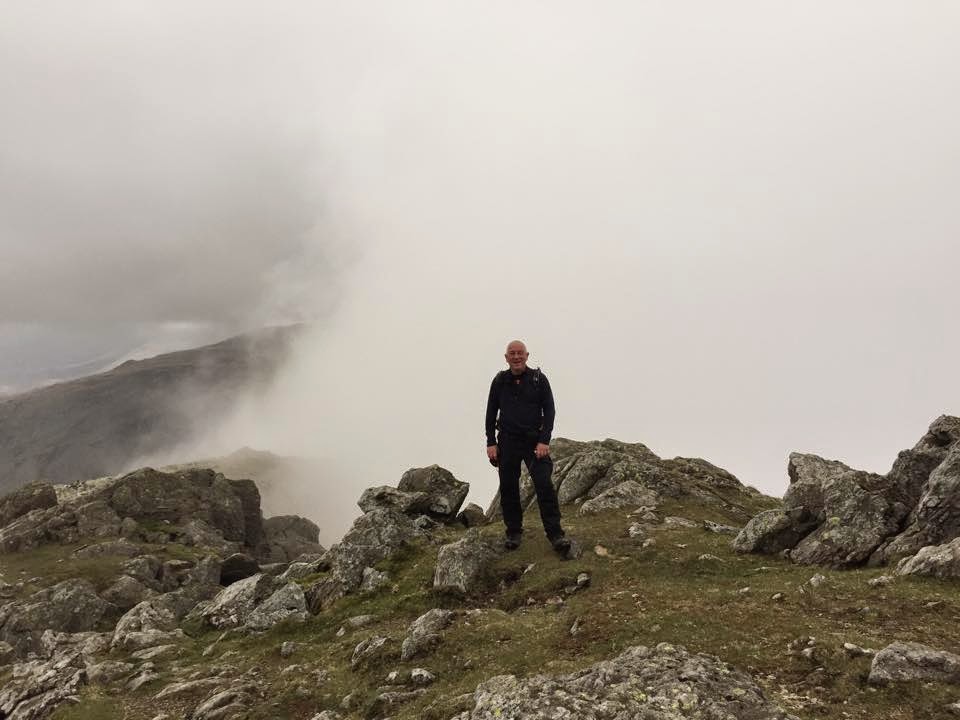 Dropping off the ridge slightly we took the opportunity of having lunch in what we call Mick’s bothy. Its a wind break just to the east of the summit and a few years ago it was a bit higher than it is currently. During fell races it was possible with the addition of a tarpaulin to get well out of inclement weather here.
The walk along the ridge from Dow to Brown Pike was a grey one mainly in mist and care was needed not to stray too far to the left as the drop off is not recommended. The path is a well used one and if you stick to it then the route is a fine one with spectacular views down the gullies and to Goats Water. We were lucky enough to catch a glimpse of Blind Tarn for a few seconds and just long enough to take a photo. 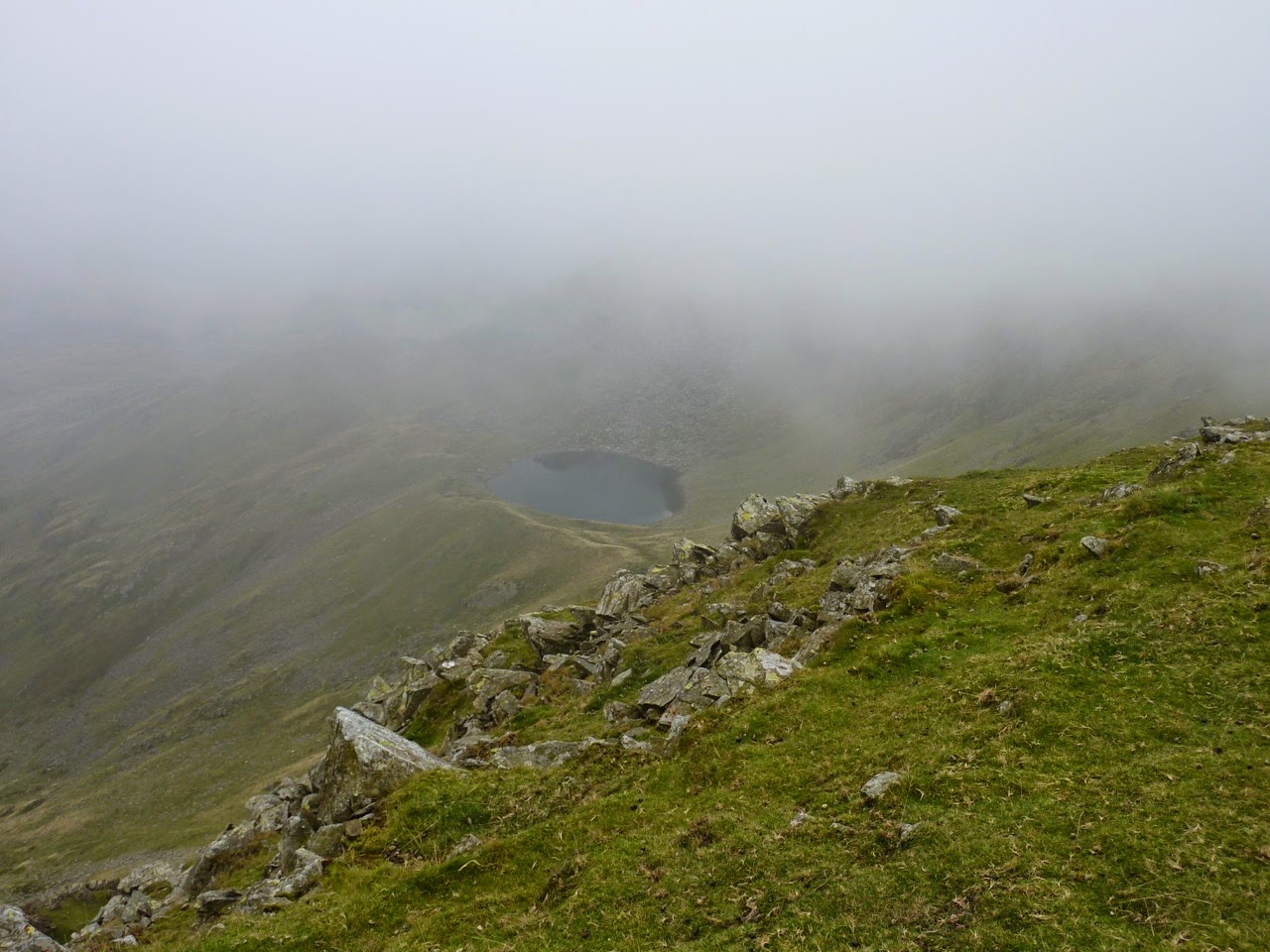 Blind Tarn.
Blind Tarn lies in a magical spot and the old Mine of Goldscope (Name may be wrong, i will check it out ) is just above it. I love the idea of the mine name but gold was never found. It is more than likely just copper or a slate mine. I remember 20 years ago spending a weekend up here and investigating the mine and the many adits in the area. Unfortunately that was before the digital era and i have no idea where the photographs are.

As we walked off the top of Brown Pike we dropped below the cloud level to see the Walna Scar Track now looking quite huge. No longer can 4wd vehicles or scrambling/trials bikes use it any more and the work which was carried out a few years ago is still in good condition. Quite a few mountain bikers crossed over the watershed as we dropped down to meet it. 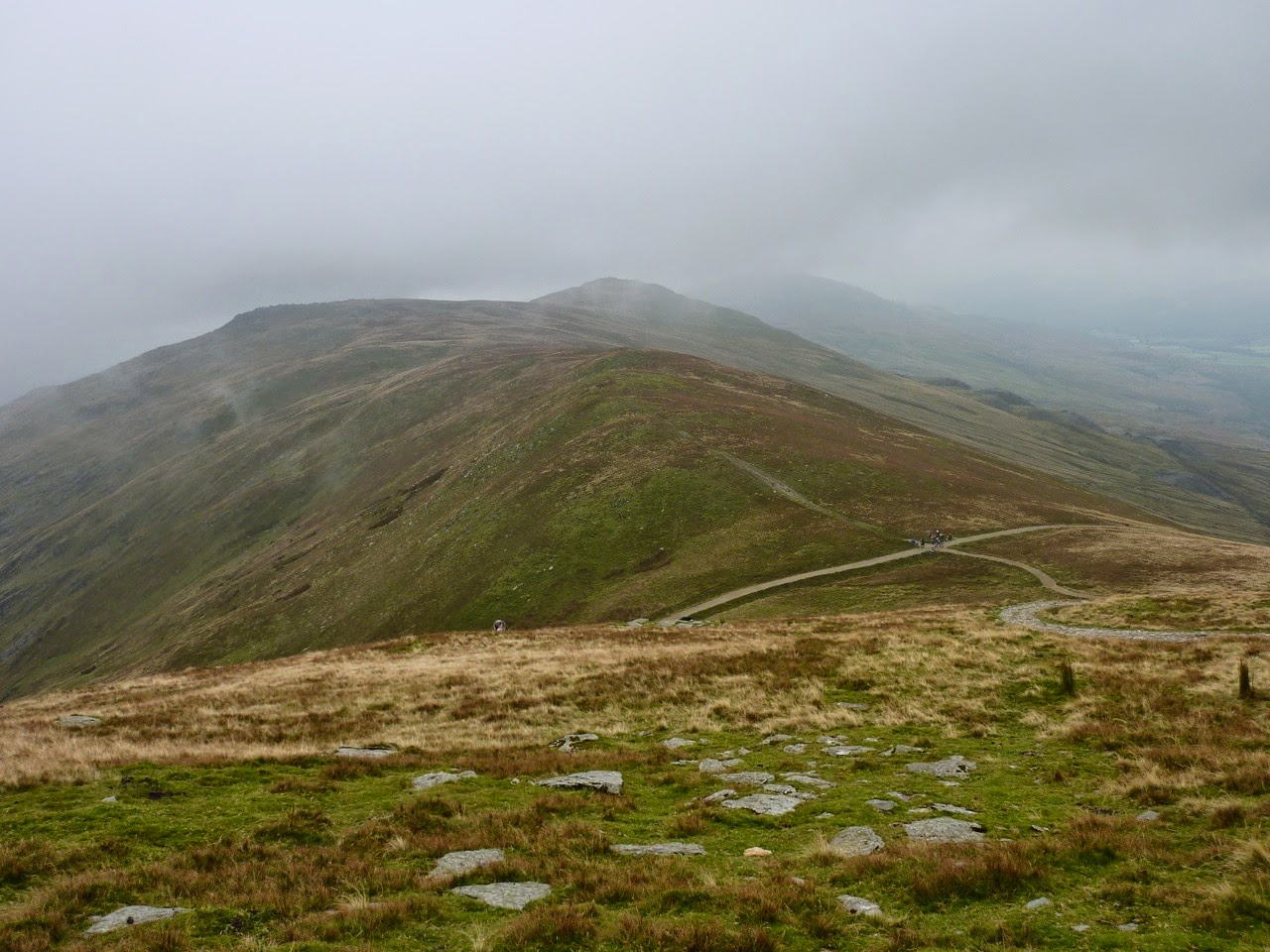 Dropping down off Brown Pike towards the Walna Scar Road. White Pike and Caw are the 2 peaks in the distance.
It’s an easy walk back down into Seathwaite from the cross roads passing the Walna Quarry and following Long House Gill. It was good to be out of the cloud but it was still a very warm and humid afternoon. The steepness of the track is such that it tends to pull you down and in places you have to almost run. 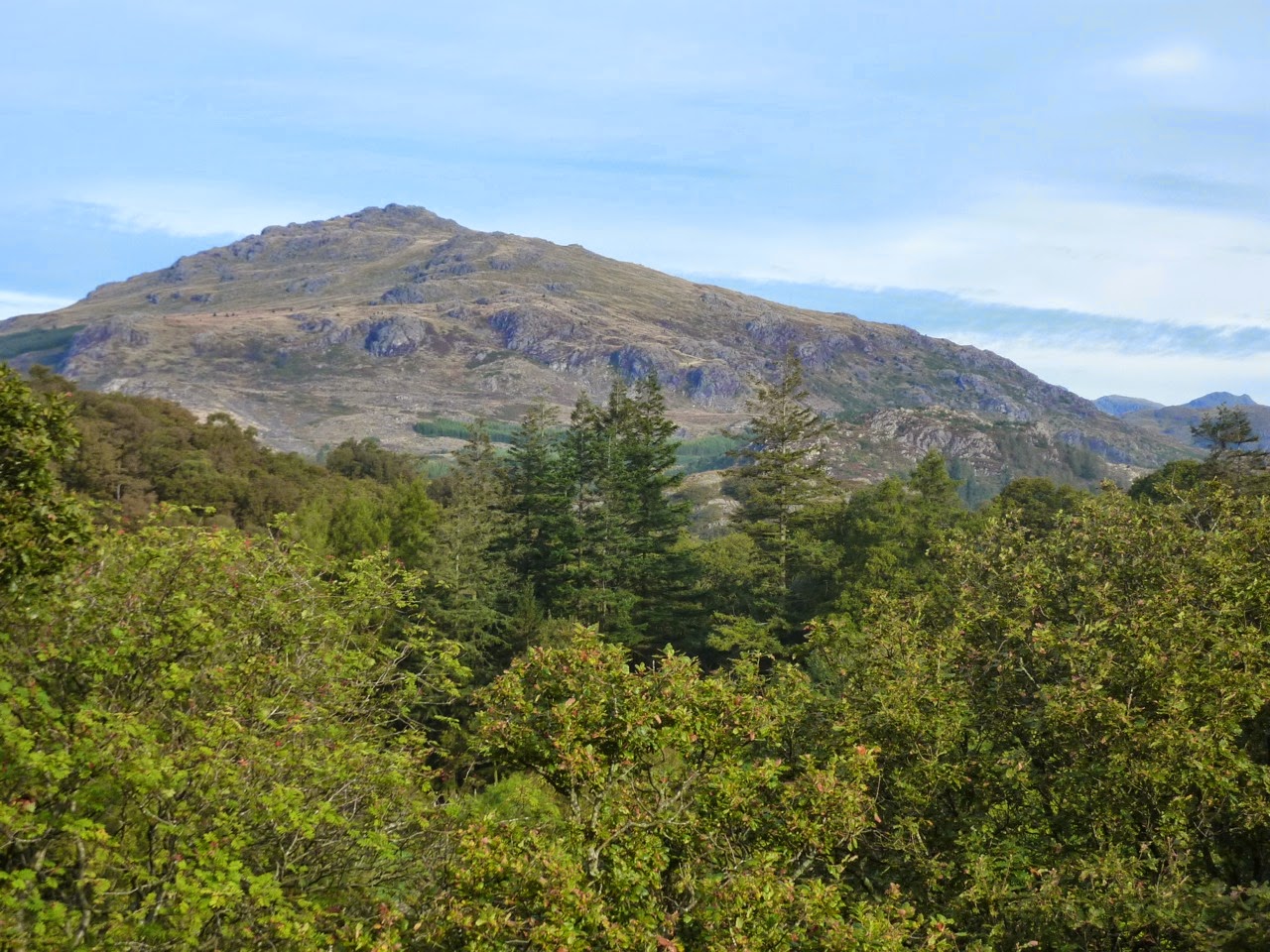 The Scafell and Bowfell ridgeline from Seathwaite. Mist Free
Back at the tent it was great to get the new stove on the go and get a brew. Considering we were feeling a bit fragile when we set off on this walk we were both pleased with the day.
Later is was great to get a good sunset and it just finished it off perfectly. 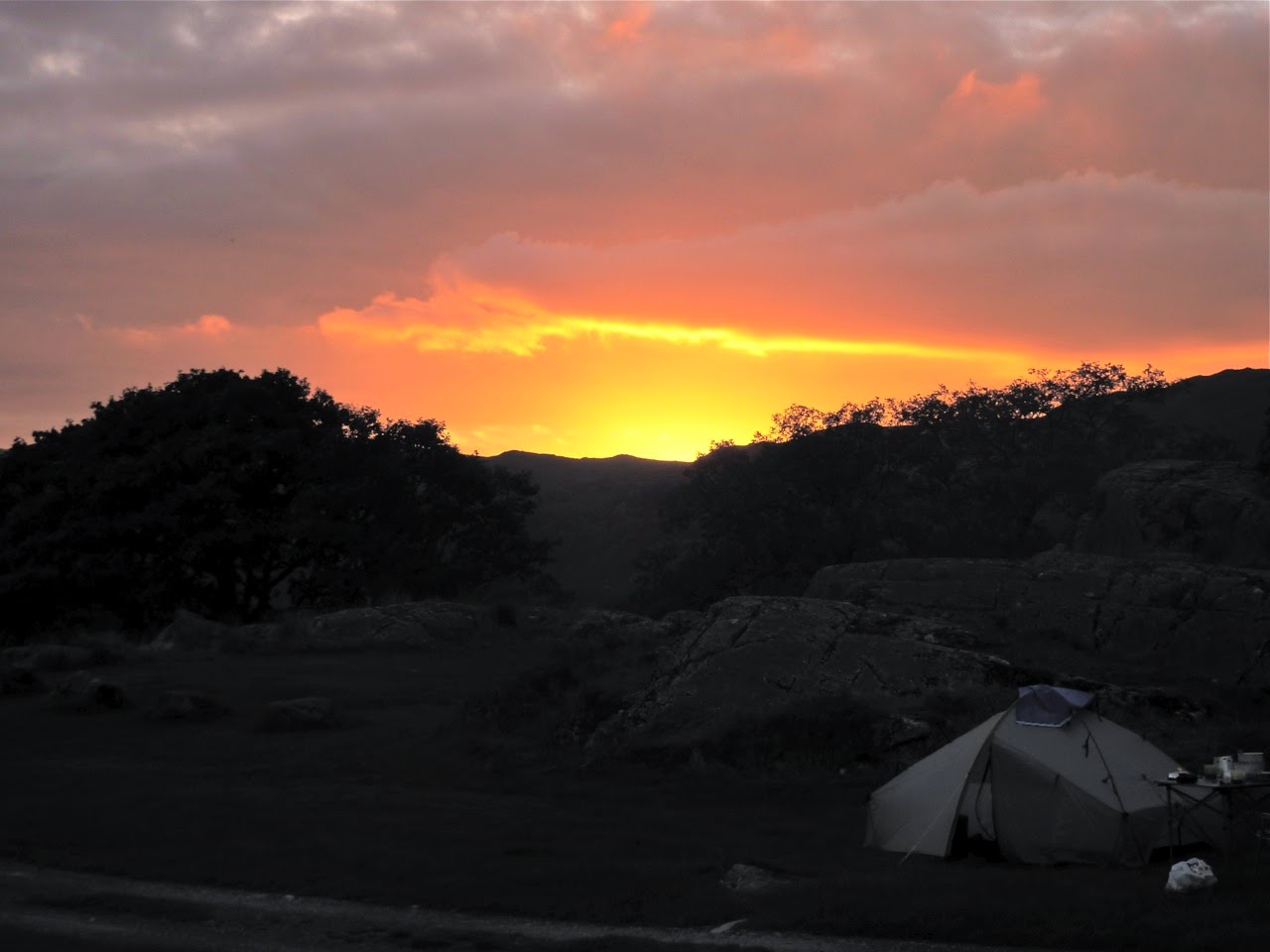 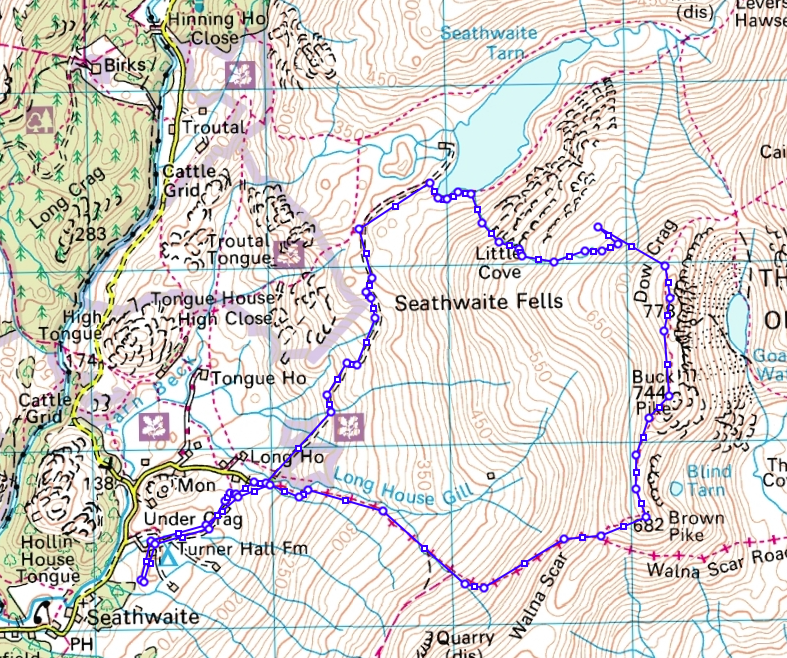 Some excellent walking there Alan. A beautiful area, you excellent photos really capture the atmosphere of the area.

Thanks very much Dawn. I think it is Cumbria’s most lovely area.

What a cracking walk and it sounds like a really good time in the pub too, Al.
Some gorgeous pictures - the mist and cloud always add to the moodiness.
I really enjoyed this post, Sir
:-)

It is a cracking walk Al. The fundraiser was in the Browfoot rooms at Ulpha which has a Pop Up bar whenever there is a function on but otherwise it isn’t a regular pub. Behind the rooms is a large house which used to be The Travellers Rest pub but this has been closed now for donkey’s years. Thanks for the kind words re-photo’s.

Excellent ascent line and atmospheric pictures, a route I've not seen before. Pity the tarn was a disappointment, a possible tent pitch for a future trip was on the cards there.

Alan - I forgot to say, I can't find a contact address here - I'm trying to solve an RSS problem with feeds, could you email me using the Contact page on my main site?

It worked out well Geoff thanks. I always keep my eyes open for decent overnight pitches.

That was a good day out Alan, despite your indulgencies. But you should have walked on Monday!

I don't know how I missed this excellent post. The photograph of Sheila says more than words ever could about what she thought of the tarn!

She asked me not to publish that photo but i couldn’t resist. Slapped wrists.

Yes Monday was a lovely day. But we had to get back home.