Quite often when i’m walking locally i come across mountain bike rear mudguards that have snapped off at the bolt boss. I see many of these, so who ever designed them didn’t do a very good job. Another "unfit for purpose" piece of kit.

But on the other hand i thought it such a shame that this lightweight, tough, rigid plastic was going to waste. I think i am right in saying it's made from the same material as car bumpers which is Polypropylene.
I had an idea that i could make a backpackers toilet trowel from it and maybe a few other things.

It was so simple i don’t know why i hadn’t thought of it earlier. Anyone can make a trowel. Yes anyone.


In the past i have used another homemade trowel, made from 50mm diameter domestic waste pipe and it worked fairly well but one of the problems i had with it was the initial dig. As luck would have it, most of the areas i seem to pick are heather covered or branch infested. Breaking through tiny root systems can be quite difficult and time consuming. Sometimes time is at a premium isn’t it.

Instead of shaping a “recognisable” trowel handle i decided to cut a V shape that will penetrate the ground easier than the normal curved end.
Once the ground is broken up i use the scoop end to create the hole and repeat as required.

I found the broad end of the mudguard had a reinforcing bead of around 3mm thick running along its edge. I removed this with a file to create a sharper edge.

Then i drilled a hole in the trowel so that i could attach it to a small carabiner in my rucksack top pocket.

(The image below shows 2 holes. I drilled the one nearest the end first but found the middle area was best suited to my rucksack pocket and so drilled a second hole.) 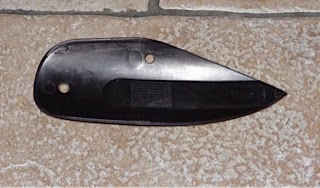 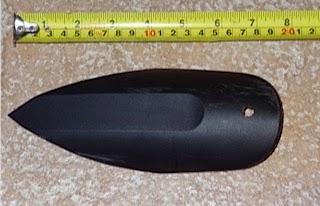 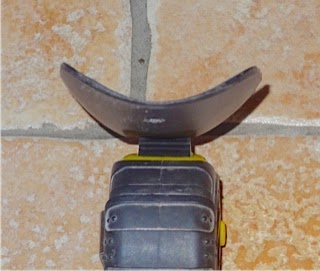 Trowel curve and edge bead.
(Trowel resting against a tape measure to enable the edge and curve to be viewed).

Weight is 25grams. I could make it lighter by adding a series of holes but i’m happy with the 25 grams.
It would also make quite a handy tent stake for the snow, the holes used for guy line attachment.
Posted by AlanR at 2:34 PM

nice to meet you here. i am Fany,a new member of ShenZhen XTAR electronics co. ltd. as a new member of my company, i would love to invite you to use my company’s product.
When i see you blog, i know that you have a lot of interests in manythings, so it would be eye-catching if you can do the product review for us. Do you ever use flashlight?
please kindly let me know if you are interested.
know more about my company and our product, please visit the attched official website and facebook of my company.
http://www.xtarlight.com
https://www.facebook.com/ShenzhenXTAR
https://www.facebook.com/HongKongXTAR
Please kindly mail me back.
best regards.
yours sincerely
Fany

Can you see those £ signs Dawn. Ha

Interesting concept for making a digging tool. Have you tried it out in the field yet? Plus, how does it handle rocks/gravel?

I have proved it digging in my local woods prior to doing the post. It worked well in small root systems. I haven't used it to clear gravel or rocks. I must admit that in all my years I cannot recall having to dig a cat hole in rocky ground. But I suppose there is always a first for everything. If o can find an area with such terrain locally I will give it a go and report back. Thanks.