With a clear Saturday, something that is quite unusual for us, we headed off to Haslingden with the purpose of getting to Hog Low Pike Trig point. Where ever the route took us after that was just a finger in the air and go.

We parked up just north of the reservoirs (SD754228) on a Pay and Display carpark that wasn’t working and so parked for free. Bonus.
Plenty of chatty people about but mainly out to walk the dog. It was a calm clear day with just a slight nip in the air.

Just before we crossed the dam between Calf Hey and Ogden reservoirs, a sign read NO OPEN FIRES. So some very bright people decided that it would be ok to set their barbecues alight on top of a plastic picnic table. What is between the ears of some folk beggars belief. Calf Hey reservoir is the top one of three reservoirs in the Grane Valley which were built in 1860. 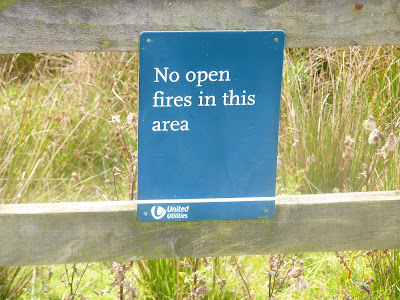 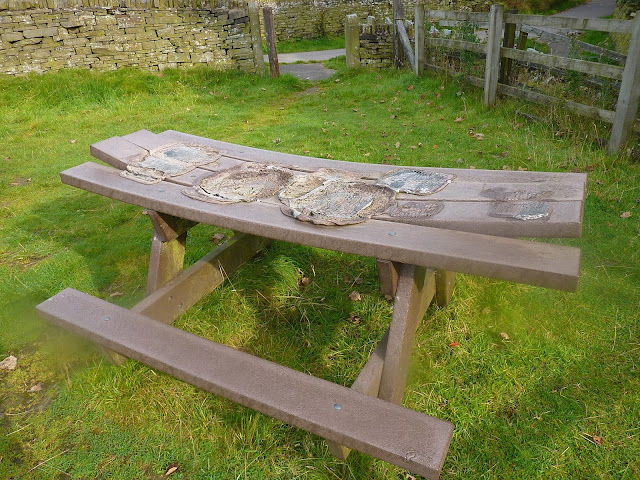 Just before we crossed the dam an old 20” sluice gate is passed.
Good views all round we headed up the grassy and muddy slope towards The Rossendale Way path, here we turned west and on a raising path. Quite a glutinous ascent into a mixed wooded gorge where numerous narrow sheep tracks caused much head scratching as to which was the correct route. The ferns were quite high and never having been here before meant plenty of stopping and checking the map. 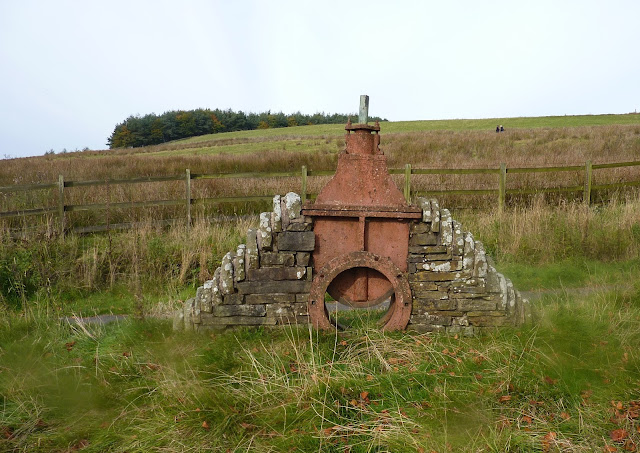 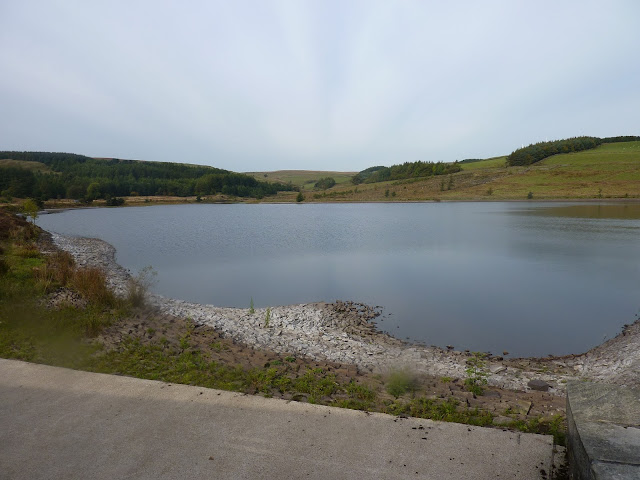 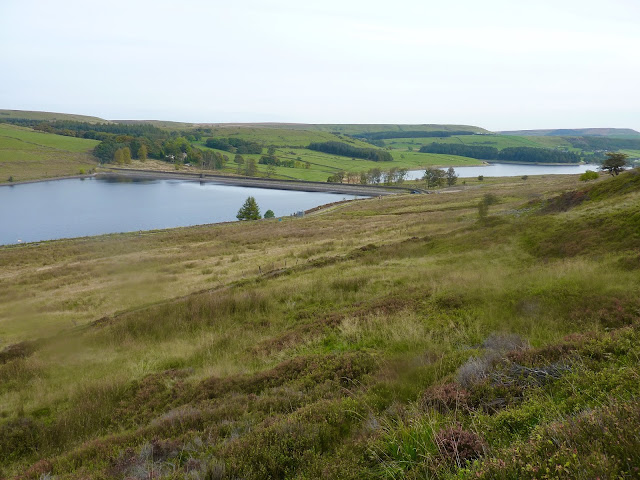 Calf Hey and Ogden reservoir in the background.
Fortunately the ferns and grasses were dry and so no need for waterproof over trousers. The clough is quite a hidden gem and worth a visit to explore more another time. Reaching above the tree line we got our first view of the trig point on Hog Low Pike.
A good stone path leads almost to the top where the views are excellent. 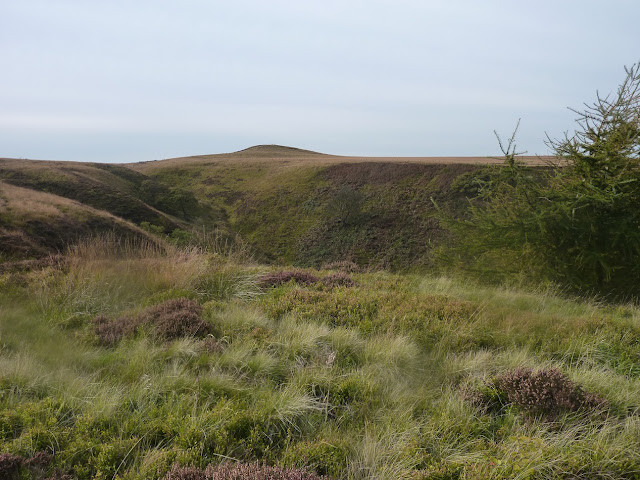 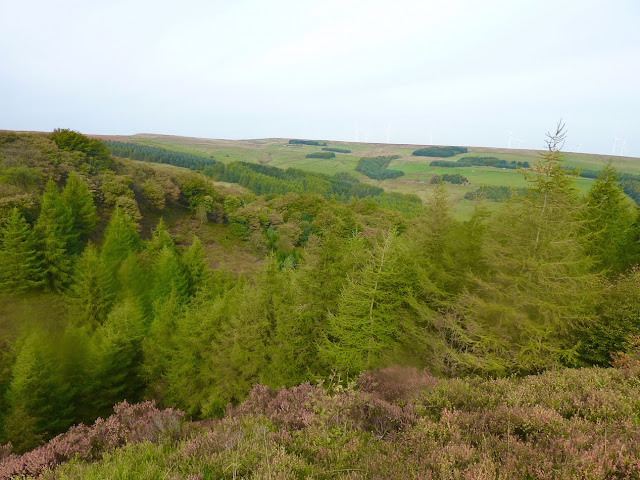 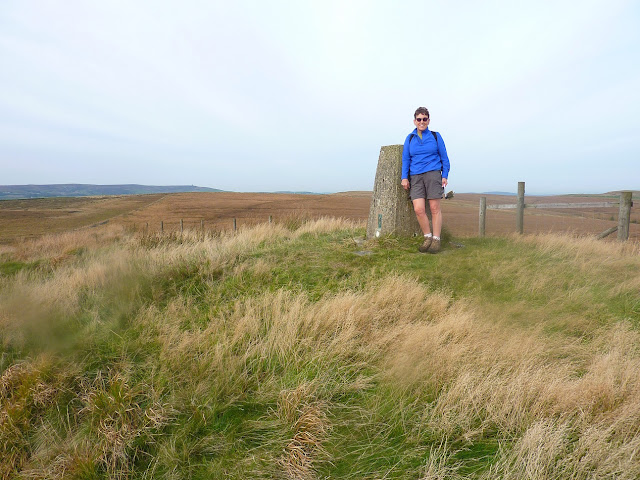 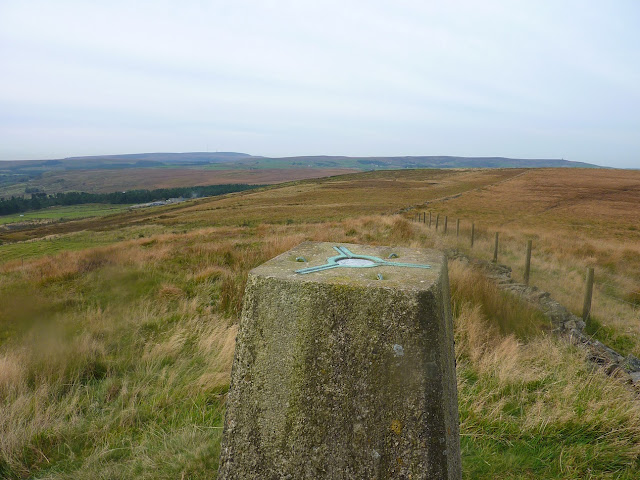 View West with Winter Hill on skyline just left of centre and far right is Jubilee Tower at Darwin Hill. 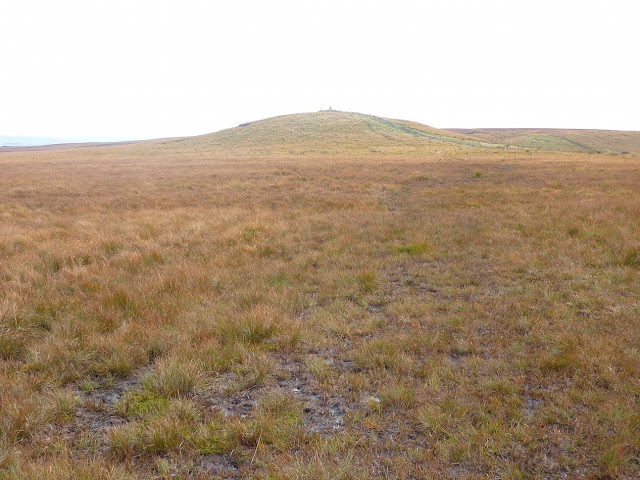 Coming off the top we planned to follow the county boundary to where it meets the corner of Broadhead Rd. Sheila mentioned how boggy is was and that it must be cows. I though it was nothing, just like Scotland really and never gave it another thought until we were face to face with a herd of the horned critters and worse still they were all watching us. The brown one in the photo below was particularly interested in us and so we gave it a wide berth. I didn’t see any calves and so thought we would be fine passing them. It wouldn’t have made much difference if it wasn’t fine as there was no walls to get over just open boggy moorland. 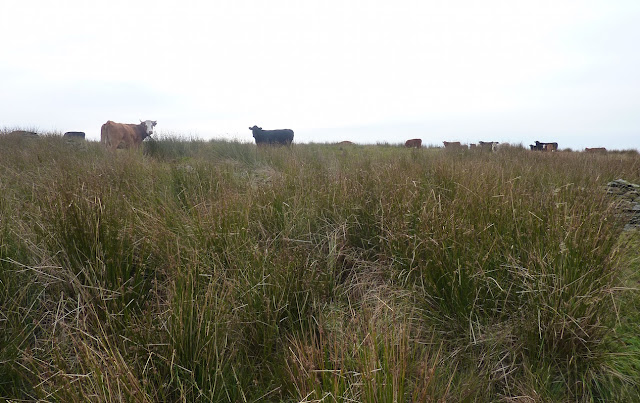 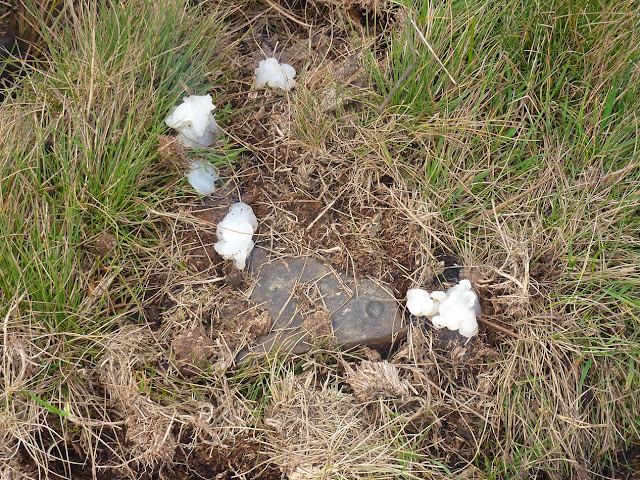 Unusual Snow Fungus. We found 2 fairly large patches of it. 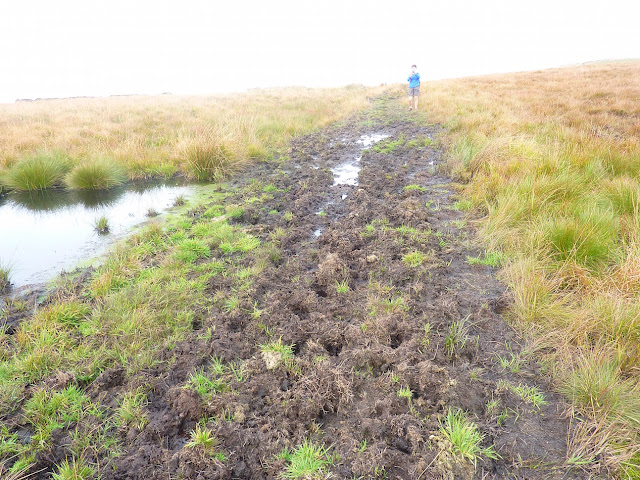 Obviously the cows use this route, a lot i guess. 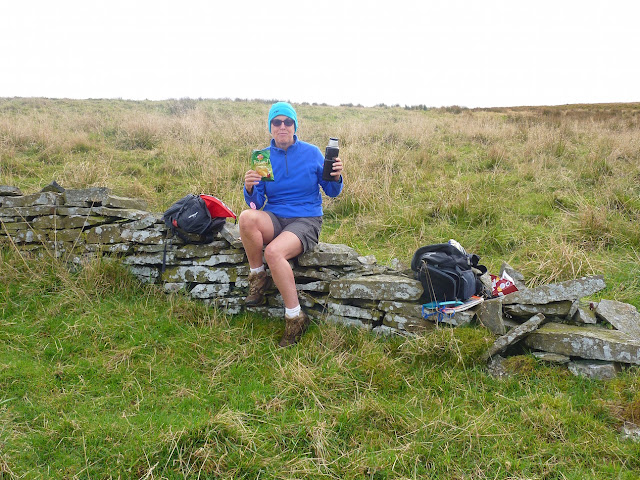 We had lunch just before reaching Broadhead Rd. The wall being a perfect height to sit and take in the surrounding. Across the way, maybe a few hundred yards we could see this large standing stone. It wasn’t far off our route and so went to see what it was about. It was just a disused quarry. It was also noticeable along this small road that people in cars use the verges as rubbish dumps instead of going to the tip. 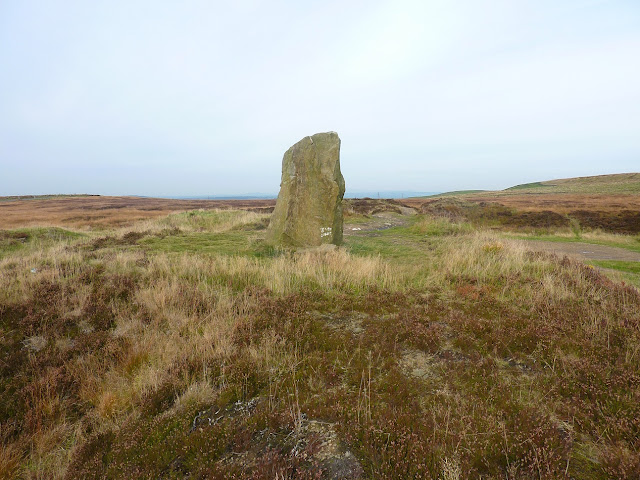 Back on route we squelched our way on what looks on the map as a green lane. Quite deep in parts and care had to be taken not to go knee deep in the black stuff. Cresting the hill the path improves and the views open up down the Grane Valley. I guess we were on the old pack horse route from one valley to the other which has now become neglected. Numerous old gate posts still stand showing where enclosures were many years ago. The walls now just traces and robbed out. 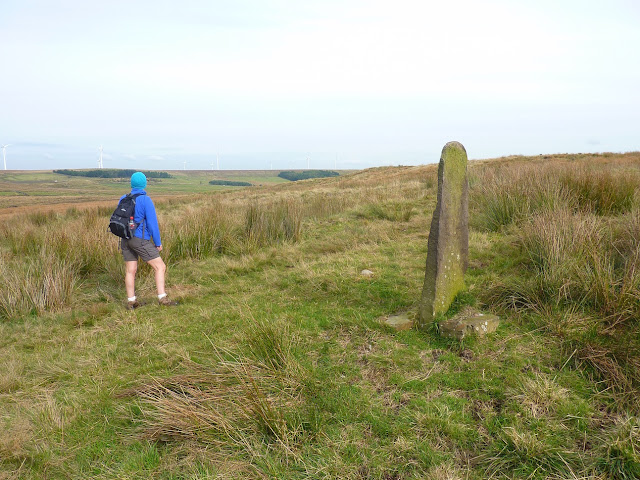 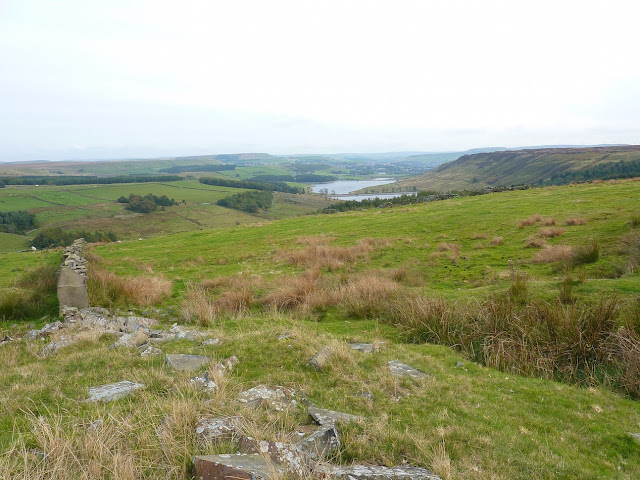 The reservoirs come back into view. Taken from near Boardman Close.
After a little map reading we made our way down through fields without a marked path until we came to the Rossendale Way. Here we passed an abandoned farmhouse of some size. Another winter should see the gable end fall down. The marked path from here enters the woodland but it didn’t bear any resemblance to the map. Still we followed it to a deep clough with a footbridge, again not marked on the map. 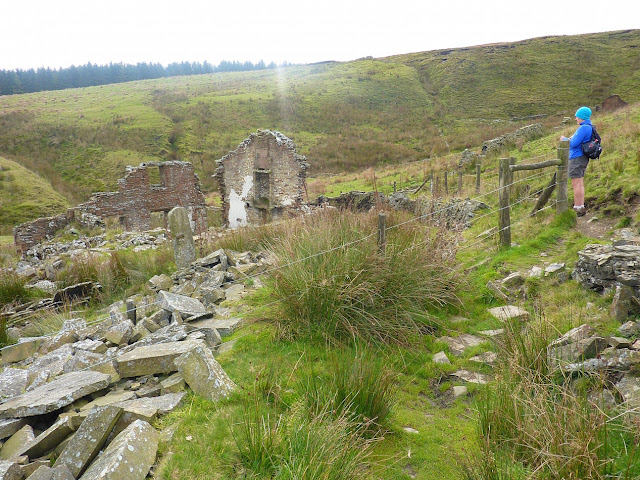 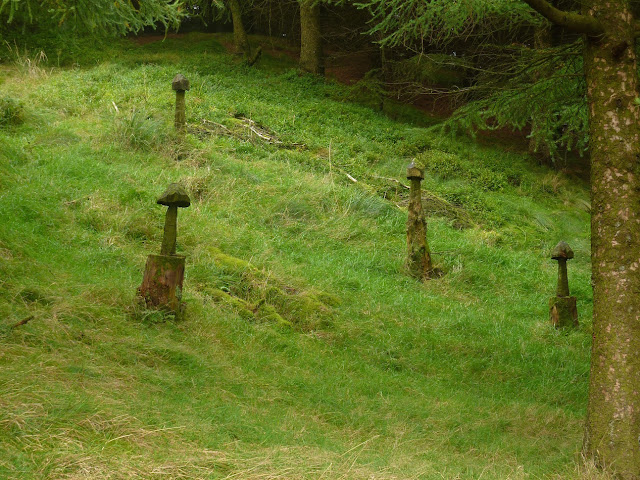 Mushrooms of the inedible type. 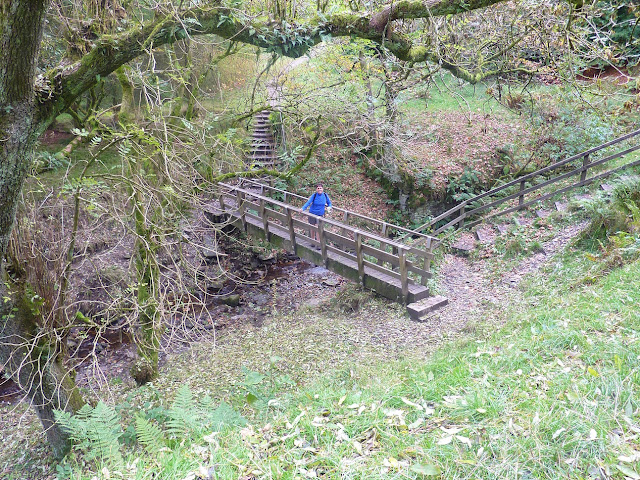 Footbridge not marked on the OS 1:25.000 and very nice it is too.
Back at the track around the reservoir we decided to continue in a clockwise direction instead of re tracing our steps. I’m glad we did or we would have missed the history boards telling of how it used to be before the reservoirs were built and who lived in the properties. 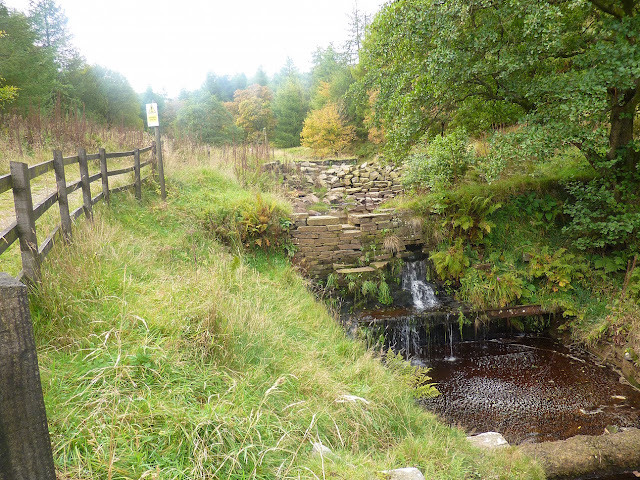 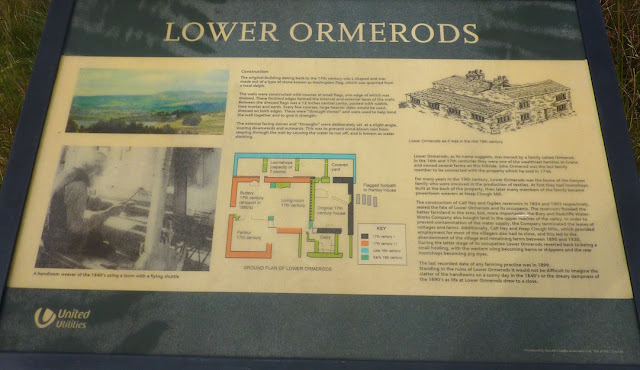 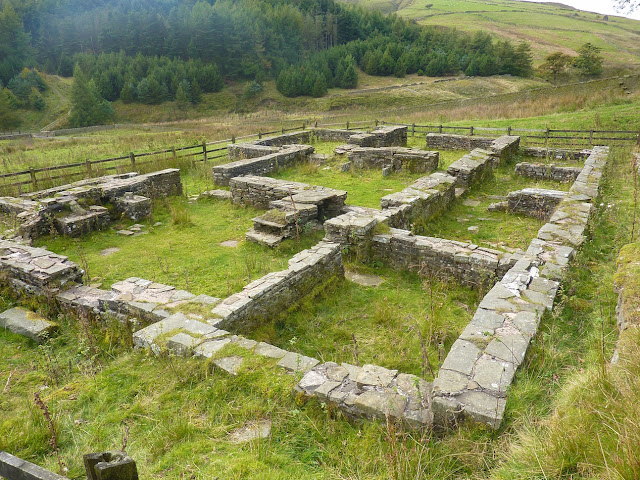 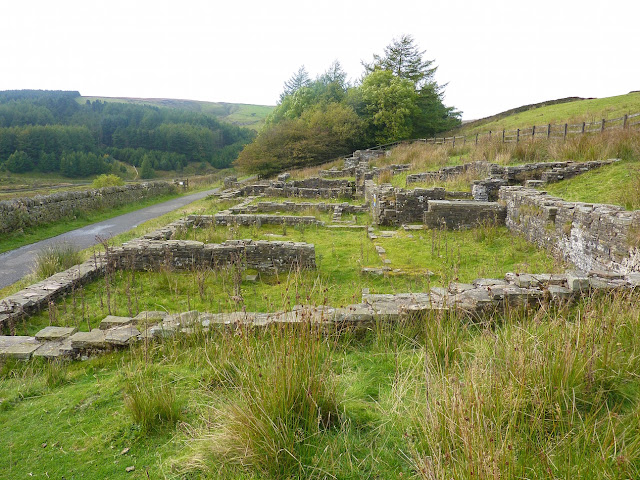 It’s great the way the footings have been preserved although i bet the occupants were a bit dis-chuffed at the time. 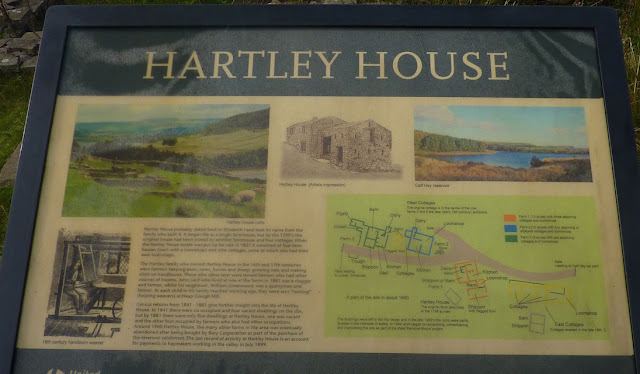 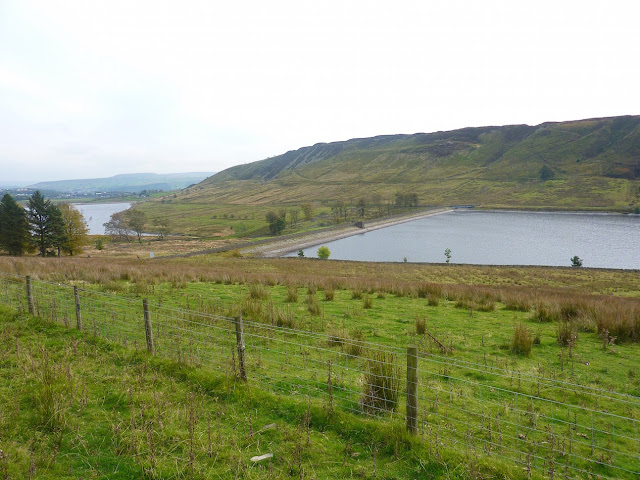 View down the Grane Valley. and almost back at the car park. 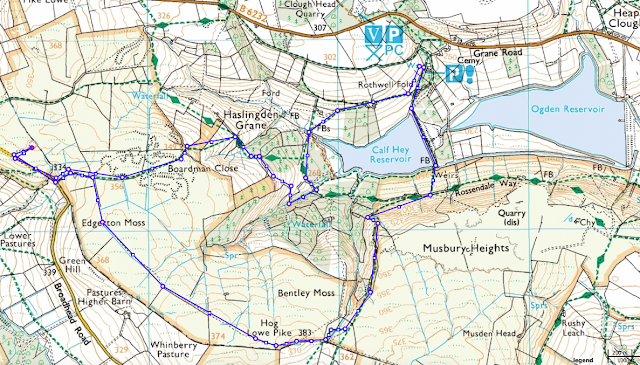 You see it so many times and still wonder what some people are thinking, BBQ = scorched earth ( melted imitation wooden tables), or I pick up after my dog then drop the plastic bag (or hang it from a tree) etc. It seems that a proportion of the population, don't care or perhaps more likely they have no clue.

There are three trigs in unusually close proximity in that area, the one you visited and SD 735 256, and SD 744 249. On my 1:50,000 OS there is a sort of boundary line marked between the latter two as a series of dashes with a dot in the middle of each dash and I can't find what that means on the legend. Looks good walking country (when it's a bit drier).

It beggars belief doesn’t it.

Hi Conrad. We will probably do those other 2 trig points next time out. I did see them and thought about fitting them into a circular walk yesterday but i’m just over a bout of the lurgy and 7.5km was enough. The line you mention is the Parish Boundary line.
It was our first visit to this moorland spot and it is very nice walking. As for it getting drier i doubt that will happen, the mud is just part of the fun.

Hi haven't done this side looks interesting here's the other - cheers Danny
http://teddytourteas.blogspot.co.uk/2012/03/scrubbing-mill-chimmney-musbury-heights.html

Hi Danny, I read your post on it a while ago and made a note to visit the area. So i have you to thank for it really.

Excellent, Alan. A good little local stroll for you. Are you 'bagging' trig points then?

Its a bit late in life to start that Martin. No, but if there is one thereabouts it makes it a bit more interesting.

What a lovely walk Alan, looks a great area.

We enjoyed it Dawn and will go back.