The A515 between Buxton and Ashbourne is a great road to witness a sunrise. Its blinding.
We were here nice and early for our Christmas walk and lunch with Martin and Sue and too many others to mention in this sentence.
It was decided that we would have breakfast in the cafe in Hartington and upon arrival at 8.50am found that it was closed. The sign on the door pointed out that it was not open until Monday. Strange that a cafe doesn’t open on the day that i would guess is the busiest. Oh well, their loss, and ours.

Apart from a bit of a chilly breeze the day was quite balmy with huge clear blue skies. On other occasions we have been here at this time of year deep in snow with impassable roads. So please India, Russia and China keep belching out the CO2’s. It’s heart warming.

At assembly in the lay bye i think we counted 28 souls and 1 dog. Motorists passing would be forgiven for thinking there was a Marks and Spencers on the other side of the hedge. And then we were off, the huge gradient onto the Tissington Way easy conquered. The first of many “meanders" quickly overcome as we made our slippery way off the old railway line and down to the River Dove just shy of Milldale. A few bottoms got muddy on the descent. No group photo?

Once down by the river the breeze disappeared, the sun was shinning and the layers were removed. What a glorious day.
As with all group walks chatting is the main event. Good to catch up with Mick and Gayle as always and we hope you enjoy whatever Spain offers you. Have a great trip and don’t forget the sun cream for Colin.

We met Heather for the first time, TGO Challenger and all round good egg. Along with Rowan or Rohan, the dog. What a lovely companion.

The scenery along the Dove is wonderful although it was obvious that the wind had been fierce here during the past few weeks. Numerous trees were down and lots of logs had been cut and piled for removal.

Just before Biggin Dale we stopped for a compulsory coffee and brownie distribution. This has to be undertaken to ensure that the Mountain Rescue are not required. It was quite a leisurely brew stop and one could tell that it had been much rehearsed in the past.
Sadly, we had to resume leg bashing but unfortunately Gayle had forgotten how they were supposed to work and decided it was far better to test the cushioning on the bottom of her new trousers. Mick dashed to help, not.

Just a little disappointed that we had not been in snow and sleet and torrential rain we made it to the sanctuary of Hartington. There were no complaints, no one got lost, no lost equipment and funnily folk were still laughing. Some Christmas do this i thought, Bah Humbug.

The Lunch was booked and food pre-ordered at the Charles Cotton Hotel and that’s enough said about that. No point in telling you how good it was, because, well it wasn’t.
Martin’s quiz was as good as ever considering that they only got back from Patagonia a couple of days ago. And as it happens, the Bah Humbug team won the prize with 24 1/2 points from a possible 30.
Considering that Sheila and I usually avoid quiz’s like the plague, it was good fun. Well done the A team. The choccy’s kept us going on the return leg.

Martin was left to pay the bill and the rest did a runner just in case they remembered that we had had no boiled potatoes and that the food had not been heated, that we did have an appetite, that vegetarians don’t like ham and that fish doesn’t take as long to cook as turkey, that sprouts don’t get mashed with bacon because again it doesn’t go down well with veggies and seasoning is required, that mince pies need cream and well i could go on……..

It started to rain, just a little and not for very long. The hills behind us disappeared and the sky in front was looking ominous. A couple more meanders took place and Martin caught up. There was no swearing, there was no mention of food, for the whole of the return trip. I assumed why not.

We saw a tractor, a nice new MF, well it would be rude not to wouldn’t it.

As evening closed in the sky partially cleared to allow the sun to set spectacularly. Fortunately with such a clear sky we didn’t need head torches to find our way back along the Tissington Trail. Timing was perfect and farewell’s made, the darkness closed in and we were away.

Once again we had a wonderful time and met new people. Thanks Martin and Sue and everyone else. 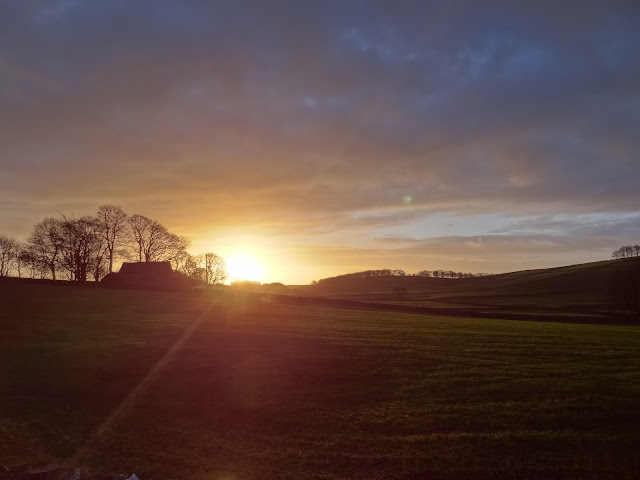 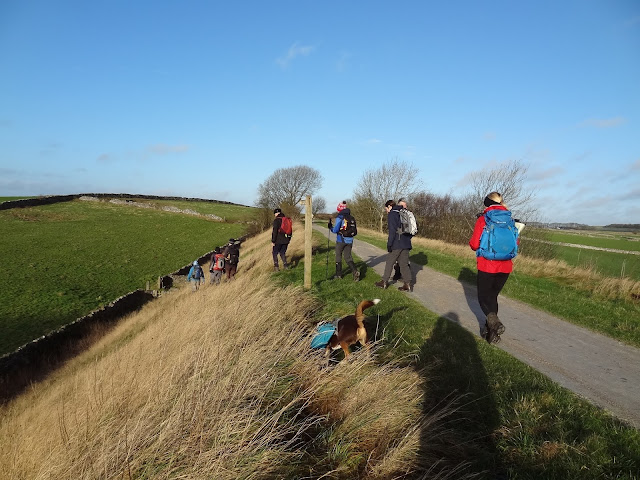 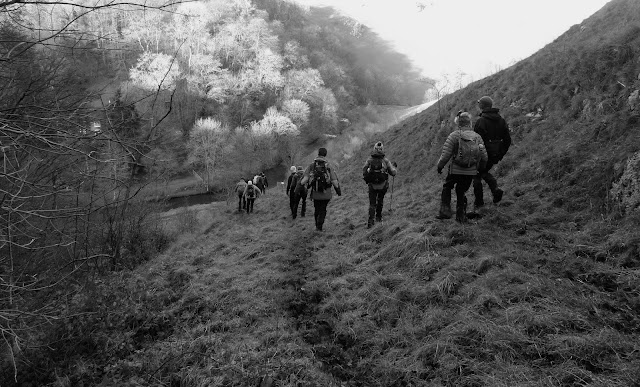 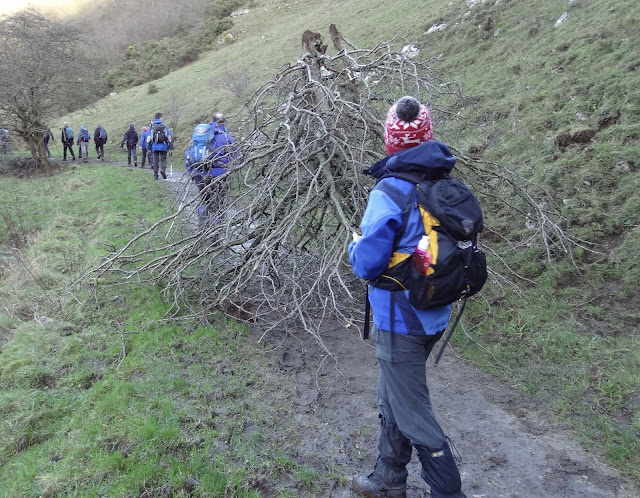 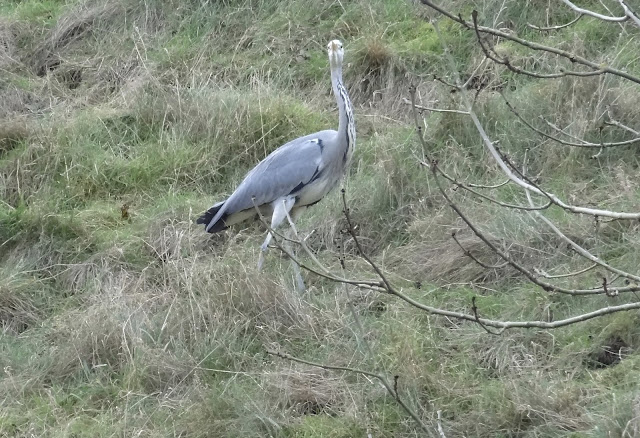 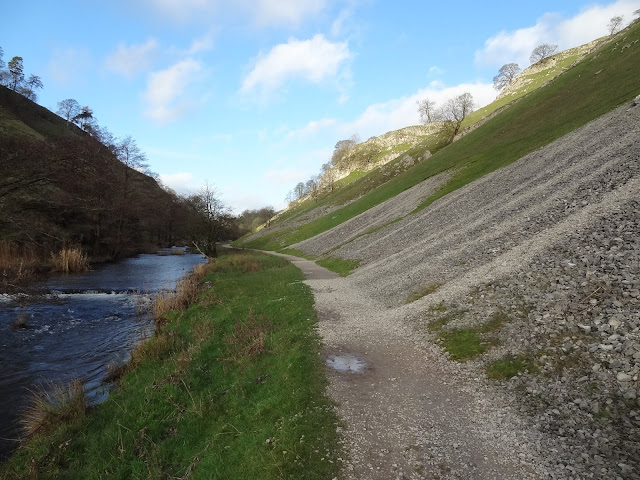 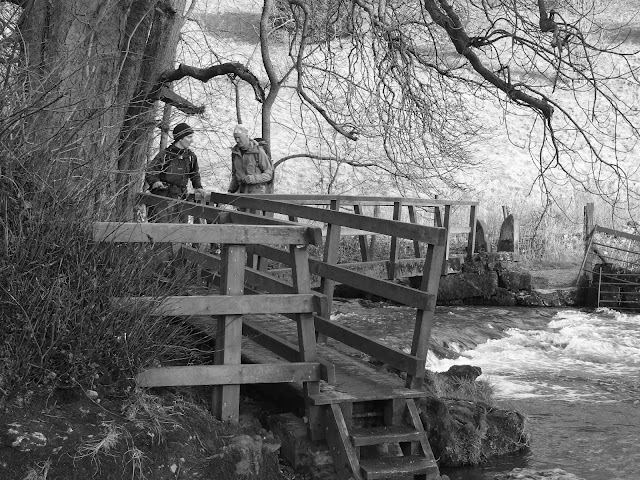 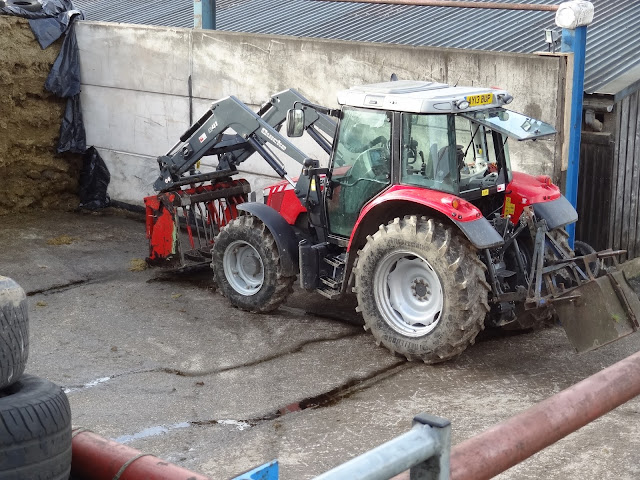 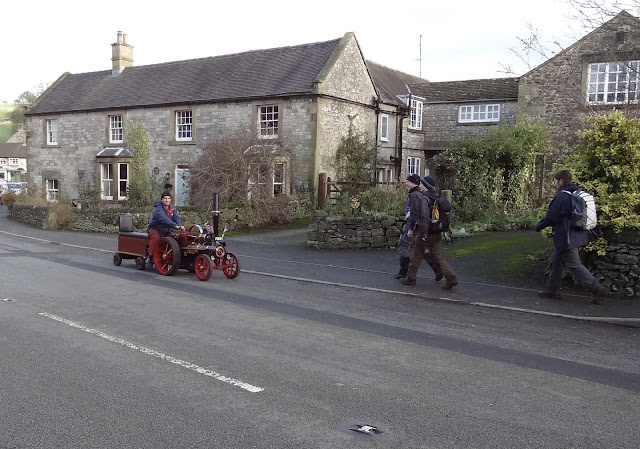 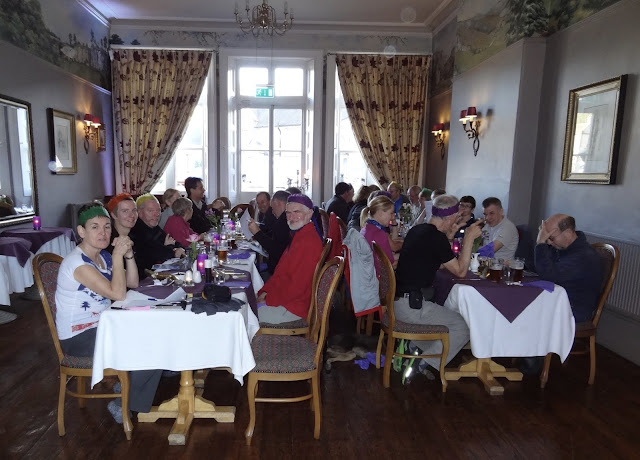 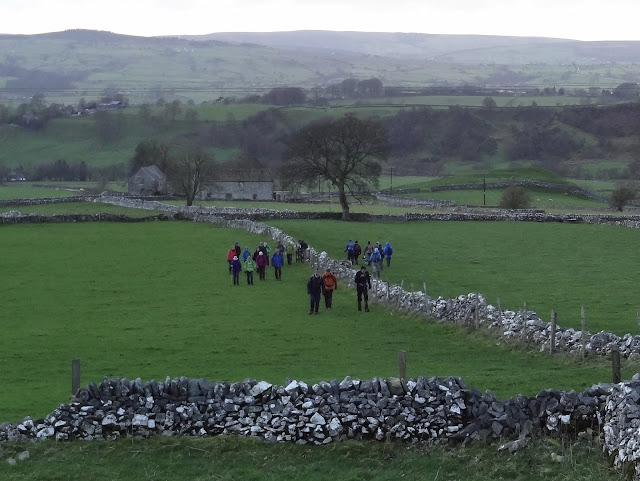 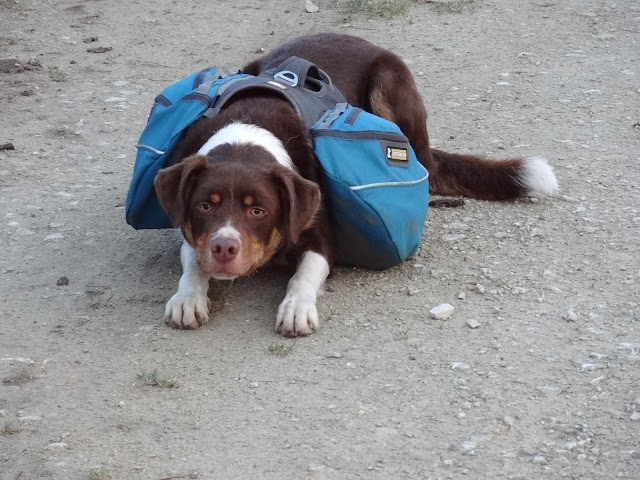 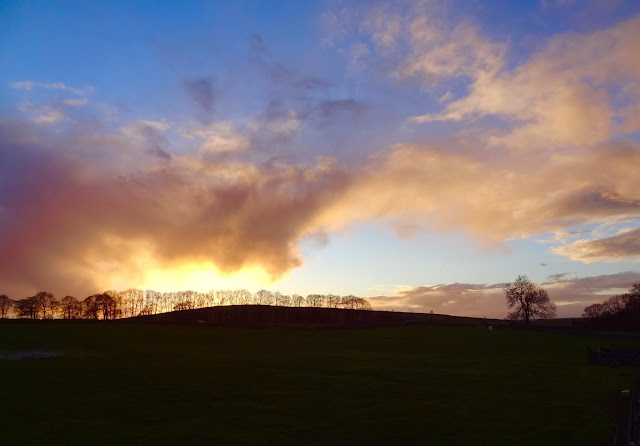 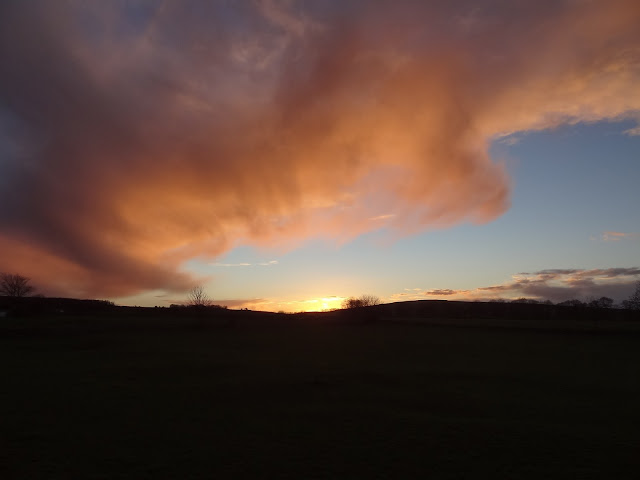 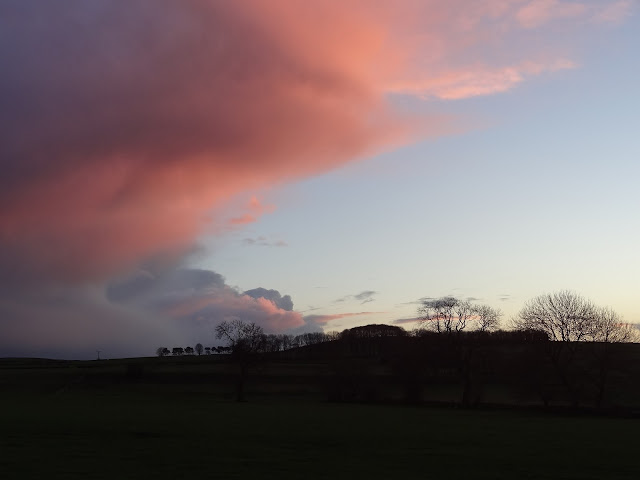 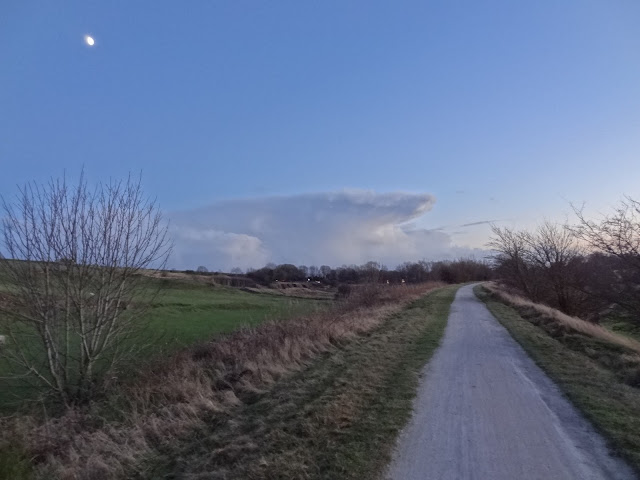 Note. No filters or editing software used on the sunsets. Thats how it was. Honest.

A shame about the Charles Cotton Hotel though. I always felt it exuded an air of excellence - just shows how wrong you can be.
Merry Christmas!

Cheers JJ. All the best to you and yours. Yes the CC has been very good on previous occasions. Don’t know why it went wrong. The staff and service are always welcoming and its a nice place.

Never mind the padding, I can report back on the mud-shedding qualities of the seat of my trousers ... and they're not very good in that respect. The mud clung doggedly on in spite of all that sitting down in the CC Hotel.

Incidentally, I cooked a veggie Cashew, Lentil, Leek & Mushroom loaf thingy today and it was so pleasing that I was tempted to put a slice in the post to the CC Hotel to demonstrate how a veggie main course doesn't have to be free of both flavour and texture. Of course, it wouldn't be warm when it reached them, but I'm sure they wouldn't notice!

Good job it was only mud then. Ha

Yes, we felt gutted for you. Having to wait all that time and then what you got was poor. Your loafy thingy smells wonderful or is it the seat of your pants. Bah Humbug.

Wonderful Alan, you always manage such superb photos too.

That's an excellent report Alan, and yes it was a shame about the food at CCH, which as you say has always been good in the past. I take full responsibility of course, but sadly I can't stretch to refunds. Suggestions for this year's venue would be most welcome.
At least we had a good day out.

You might have organised it Martin but it certainly isn’t your responsibility on the food. Especially not refunds. Its always been good there but whatever happened this year was disappointing and sadly will mean we go somewhere else.
We have eaten in the Devonshire opposite and had an excellent meal, but not sure if they could cope with 25+. Might be worth a call as i remember they had a separate dining room. The Cat and Fiddle should be up and running by next year also.