A jolly trip into Cumbria Pt.2.

The rain became heavier and it woke me up in the early hours. I could hear the stream which ran through the campsite. I stuck my head out of the tent and could see the fast moving water, much higher than it was yesterday, but it had not burst over. However, there were large pools of standing water further down the site but it didn't look anything to worry about. I went back to sleep.
The next time we woke it was calm, well in respect to the rain anyway. The pools we saw earlier had now all but disappeared and the stream was normal again. The difference was the wind, it had picked up a lot.
During breakfast we decided it would be silly to pack up and walk out of the valley, a valley we had never done any previous walks in, except when I had walked through last year.
So we stayed another day.

Grizedale is a busy spot, especially on weekends. There are an abundance of walking and biking routes here and fairly well marked out, however it’s still quite easy to become mislaid as there are just so many tracks going in different directions.
We did a route which went up to Carron Crag, the best viewpoint in the forest and it was worth it. The wind was howling and the gusting could easily blow you over on the exposed top. The fells of Coniston, now close to us were stunning with the clear crisp air picking out the details.
Our future route over the fells into Seathwaite stood out clearly. The Walna Scar is well named. These days the route is now restricted but previously you could drive 4 x 4 vehicles over it, and that made it a bit of a motorway. 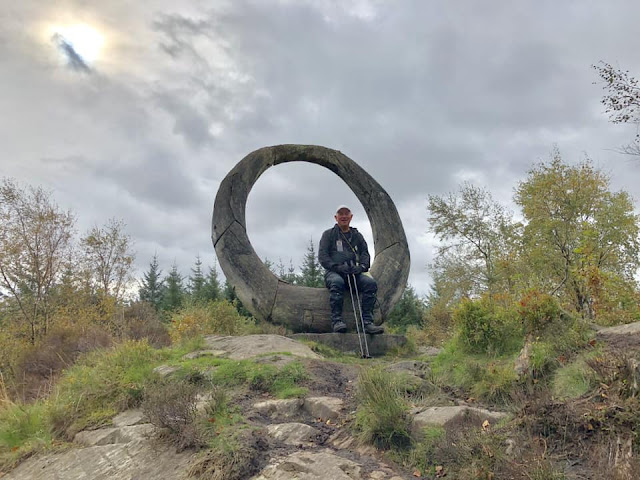 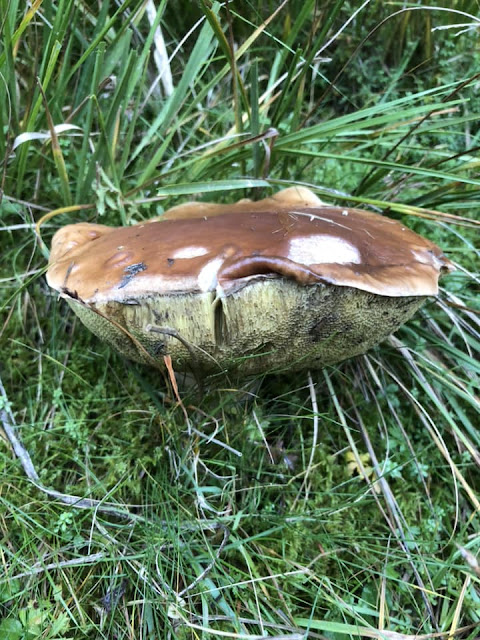 Wow, thats what you call fungi. 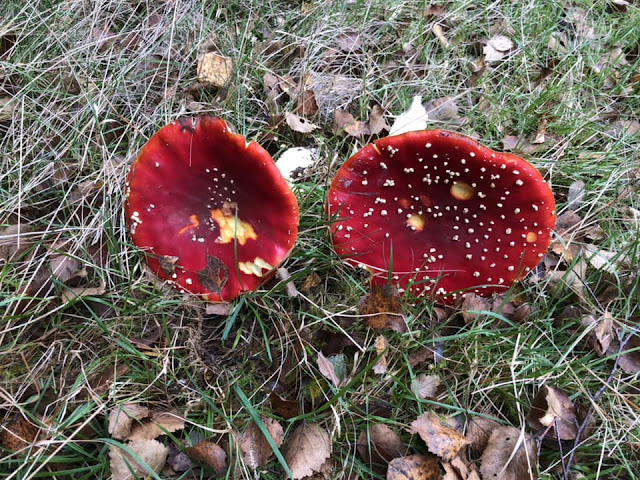 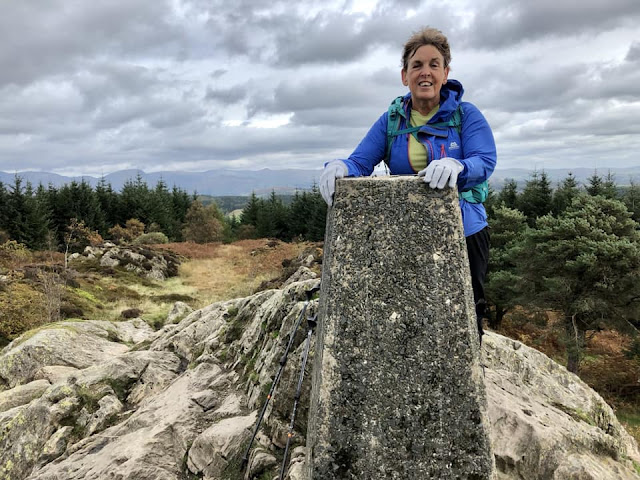 Having had some time walking the high tracks on the west side of the forest we made our way down to the visitor centre. The route down was fantastic, brimming with fungi everywhere you looked. We could have spent hours just searching them out.

The visitor centre is a nice spot, relatively new i am guessing, with mountain bike hire and Go Ape adventures. The cafe though is very disappointing, terrible sandwiches, unhelpful staff, dirty cups and cutlery. Not a place to recommend. Unlike the Eagles Head pub.
We checked if we could book a table for Sunday evening but we were told that Sunday Lunch is busy and the kitchen closed at 5 o'clock. Most people leave the area obviously late afternoon.
However, the landlord asked what time was we thinking of eating and i said "6". He said "if we wanted the sirloin beef roast then he would get two dinners prepared prior to the kitchen closing and save them until we came in". How good was that. It turned out the dinners were beautiful. 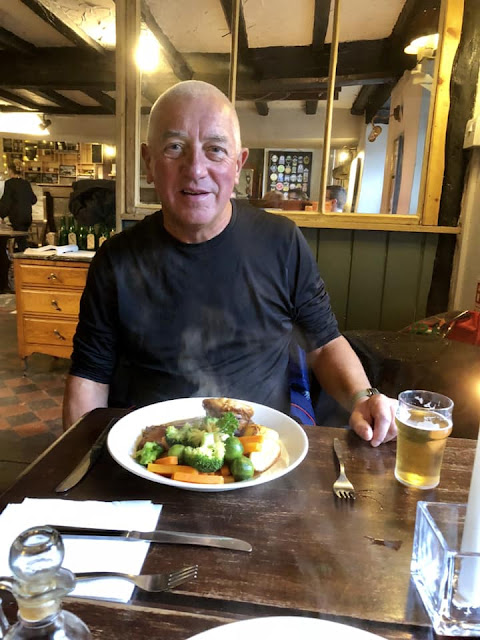 Evening meal in the Eagles Head

Sunday evening was clear and the temperature dropped rapidly. The sun went down behind the hills and we hit the sack early. Our sleeping bag are rated as 5 degrees C i think and it wasn't long before the down booties and TNF insulated jacket were put on. Sheila's phone said it was 0C.
We both slept ok and in the early morning light we stuck our heads out of the tent to find a white world and a hard tent. It didn't last too long, the sun gradually moved across the field, the frost melted away and the day warmed up. It must have dropped a couple of degrees below freezing during the night though because the water in my water bottle had ice in it. 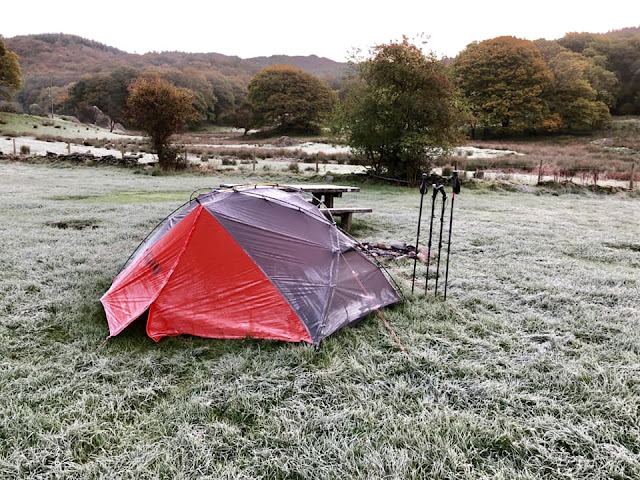 It didn't take long for the tent to dry out with a little help from my sponge wiper. Then we were away at 10.30 for Coniston. Its not a particularly difficult walk so it didn't matter about the late start.

We picked a nice route through Hall Wood which is roughly parallel with the valley road and leads back to the visitor centre. We didn't call in again. Then up through the forestry to the north of Carron Crag. Dropping down to Bank Ground on the east side of Coniston Water.

On reaching the watershed the wind was incredibly strong. It took us a while to find a sheltered spot for a snack. This was obviously windy alley as many large trees had been blown over from previous storms, but the downed root ball provided good shelter. 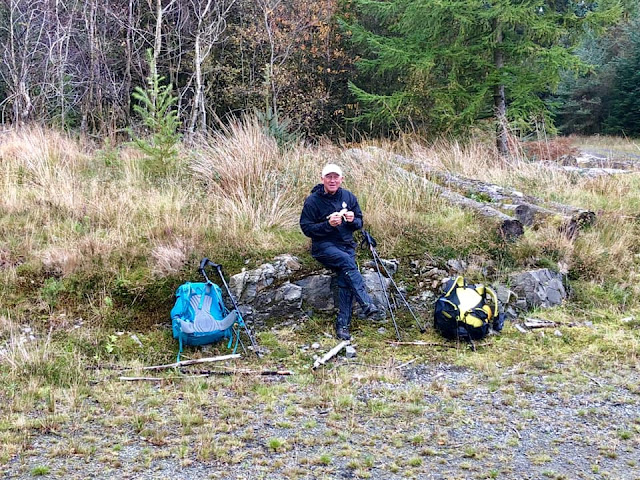 On route to Coniston. Break time.

The sky was changing by the minute, dark and ominous cumulonimbus clouds billowing around the fells. Then there would be a burst of sunlight highlighting the white washed buildings of Coniston village.
Then the fells would disappear again as if the clouds were curtains on a stage.

Once down off the fell side we walked along the road into Coniston where we spotted a well kept OS benchmark, we headed for the cafe Meadowdore, not surprising i was shocked again at the price. Two small breakfast with toast and two coffee's £23. Am i being unkind here or is that ridiculous.

Sheila got a message on her phone that a "yellow weather warning had been issued".

Now regular readers of this blog know i'm not a fan of Coniston Campsite. In fact that's part of the reason we had an extra day in Satterthwaite, so that the hordes would have hopefully left the site by Sunday afternoon before we got there.

Sheila suggested we should book in at the Youth Hostel so she gave them a ring. "Sorry we are booked up solid for the next 2 weeks and that also includes all the camping pitches" the chap said. What happened to "we will not turn away any travellers on foot"? So the hostel was out.

A few BandB's come up on Google but they were quite expensive in our opinion. Then the Waterhead hotel came up with a 2 day deal with breakfast that we thought was reasonable, so booked it. Why not we thought, we are on holiday. Ha.

We enjoyed our stay there and although the hotel is a little tired in parts it has just been taken over by a new company who are going to do a full refurb. I guess when its done the prices will shoot up too.

On our "free day" we did the tourist route up to the copper mines museum next to the hostel. The hostel is looking a bit sad to be honest. I've walked past the museum many many times but always on route to somewhere else, so i was pleased that we decided to stop here and have a look around for once.
Its a fascinating place with lots of memorabilia and explanation boards. Much old equipment can still be seen and examined. We thought it was great. 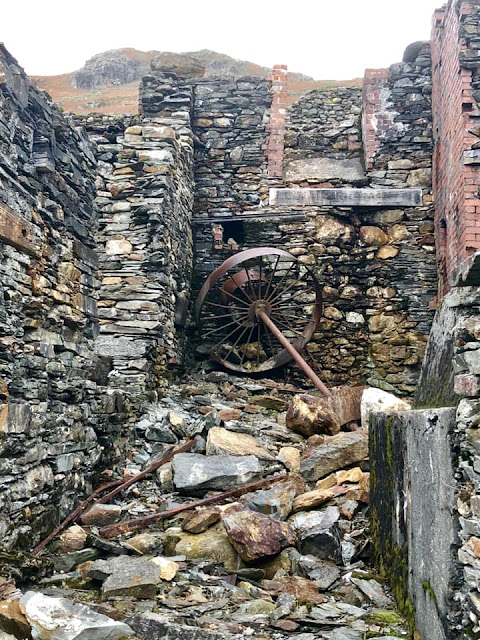 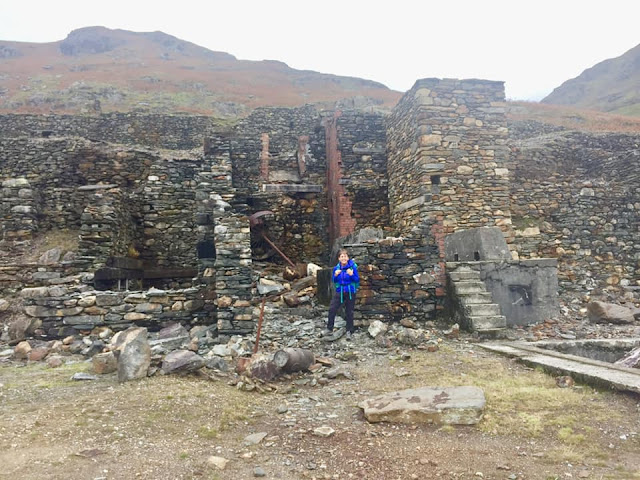 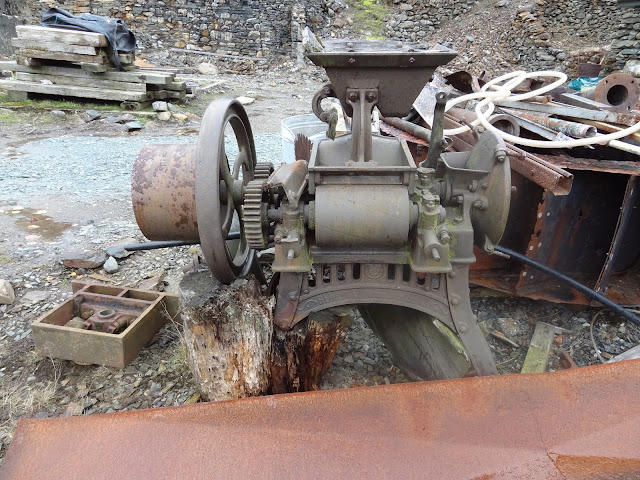 Then we made our way up the open fell side to Crowberry Haws and onto the Bell where the wind was so strong. Anyone venturing up onto the higher fells was taking a big risk this day.
I love the views from the Bell, it's a grand place to sit and spot all the old miners routes along the fell sides, so clear and you can imagine what it must have been like when the mines were in full swing. The noise of the hammers and grinders, the water wheels, the furnaces, the smoke and the many voices.
We couldn't stay up top too long due to the wind so we retreated along Church Becks south west bank back into the village, taking some photo's of the waterfalls as we went. 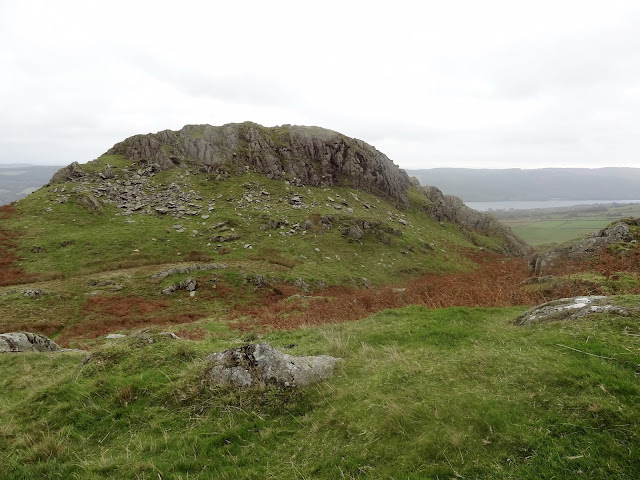 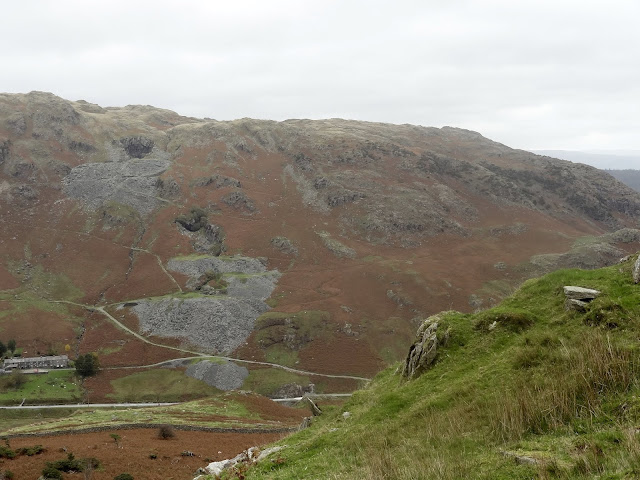 Some quarries from the Bell viewpoint 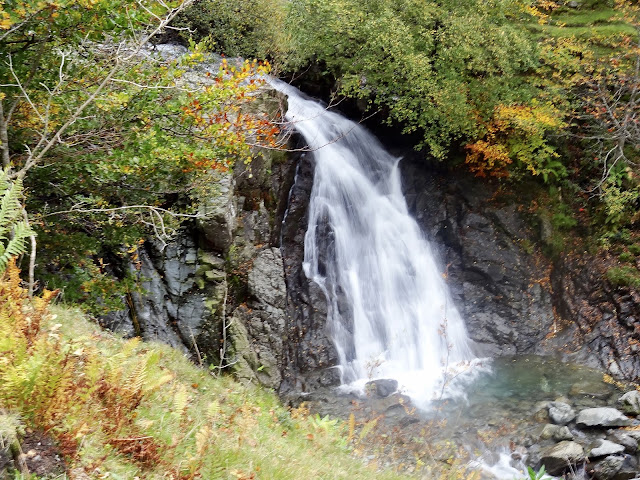 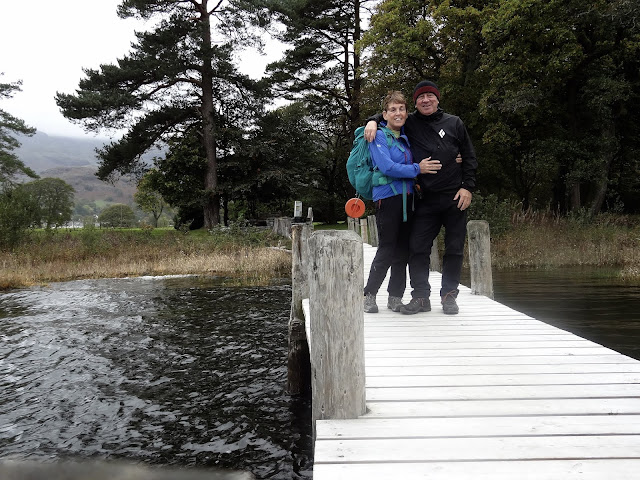 Back at the Waterside Hotel. Aptly named.
After a very windy day it was good to have a comfy bed for the night. Sheila checks the forecast and it seems its going to be a peach of a day tomorrow. Bring on that breakfast.

Typical YHA.Ato ne I arrived at backpacking they wouldn't let me stay because they had a party of children even though there was room, and although it was a hostel where camping was allowed I was even denied that. A good trip for you and a pleasant read over my breakfast.

Very kind of you to say that. Much appreciated Conrad.

An enjoyable read. Glad you both had a good trip. It is good to hear that the Walna Scar road has been restricted. last time I went there a four four was wedged half on its side in what had at one time had been a sharp bend in the track but was now a gully. Coniston campsite, what an awful place! Splendid photos too.

One last bit to write up yet Dawn. We are away again this week so I hope I can get time to do it. The Walna is fine now, it’s been heavily repaired. There are many good camp spots just off it with good water sources but let’s keep that between us ha. Storm Callum blew in over the next few days as well.
Thanks for the comment re photos Sheila took most of them.