Sorry to be leaving Boulmer but looking forward to what today has to offer. It looks great on the map.
A good track leaves the tarmac and the grass is manicured. Notices point out all the usual things. No Parking, No Fires, No Camping etc

What has been very noticeable so far, is that the Coast path is well used, well publicised but i'm not sure the community actually wants you there. There is very little opportunity to legally camp. So many of the myriad of caravan parks don't allow overnight camping or any camping for that matter and getting to campsites that will allow you to pitch are far from the path. Illegal camping does take place in the dunes but you have to pick your spot carefully as the tide rises fast and right up to the dunes. I don't understand the mentality of not allowing backpackers.

The walk is beautiful and then you turn a corner, cross a stream and your faced with Howdiemont sands and further on Sugar Sands. Both absolutely idillic. The locals don't want it to become well know. It's their bit of heaven. We lingered here a while just taking in the view.

Again we hit the beach rather than staying high on the official path which goes through the dunes and the beach car park. 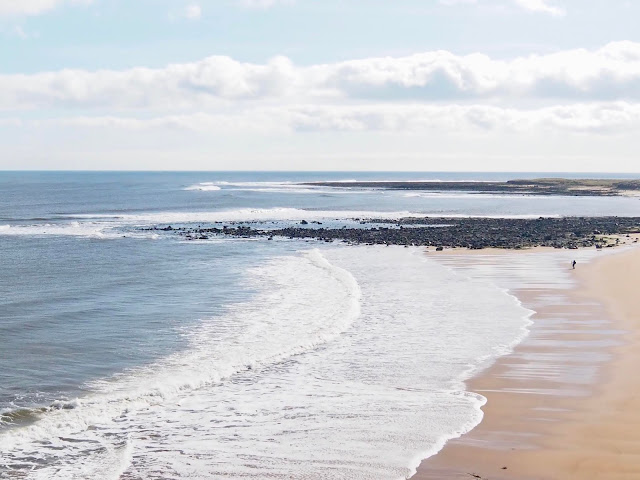 Stunning Howdiemont Bay above Sugar Sands
From the beach we headed up to the path proper and followed it to crossing the Howick Burn by a solidly built bridge for such a small stream. 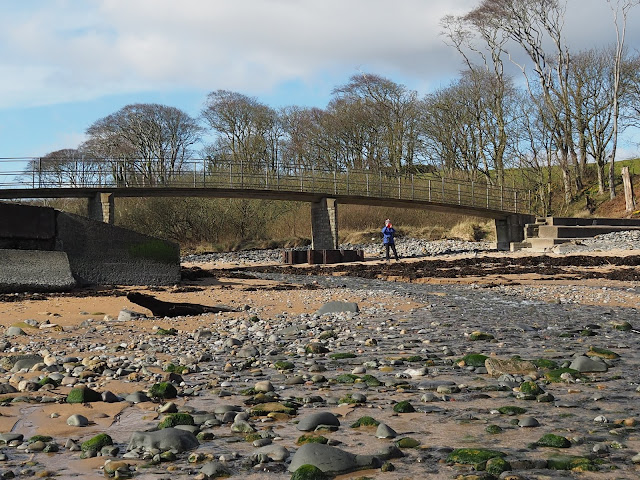 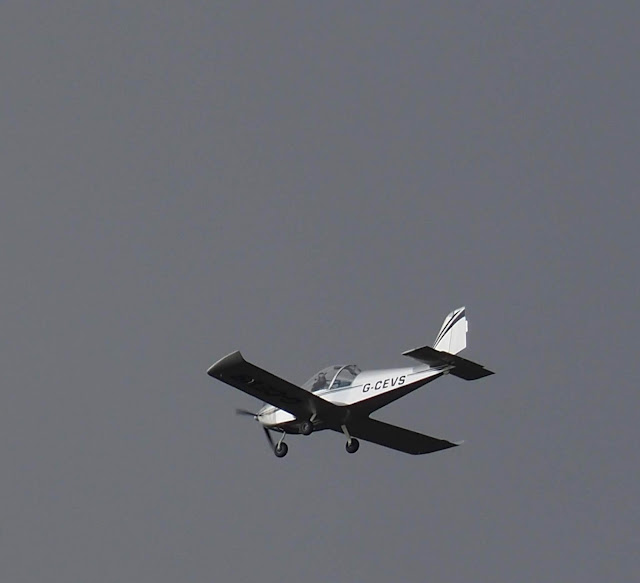 Just managed to sort the camera out in time to take this plane shot. 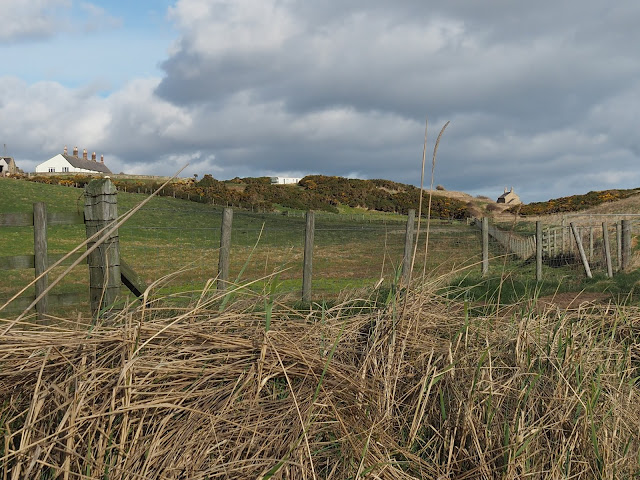 Still on a good path we passed some small intriguing rocky coves and Rumbling Kern before passing Seahouses Farm on the right and then the grand holiday let on the right called The Bathing House . As it happened walking enthusiast and photographer Andrew Locking from Cumbria was staying here when we passed, but we didn't know that at the time. 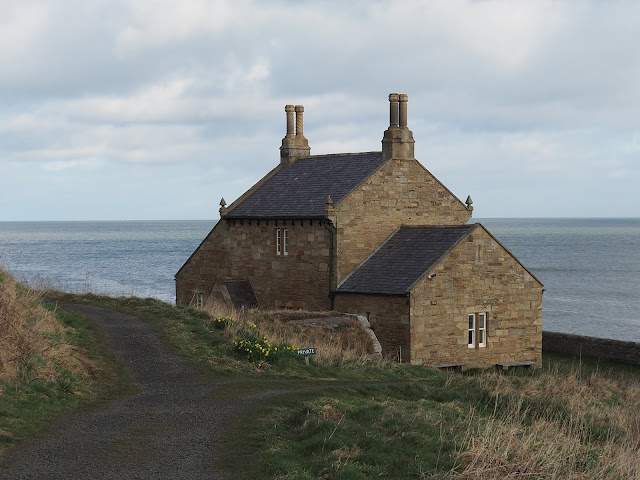 The Bathing House holiday let.
Between the Bathing House and Craster the path is good and high. Numerous cliff faces are passed with hundreds of birds nesting. We met a few dog walkers along this stretch all very chatty. 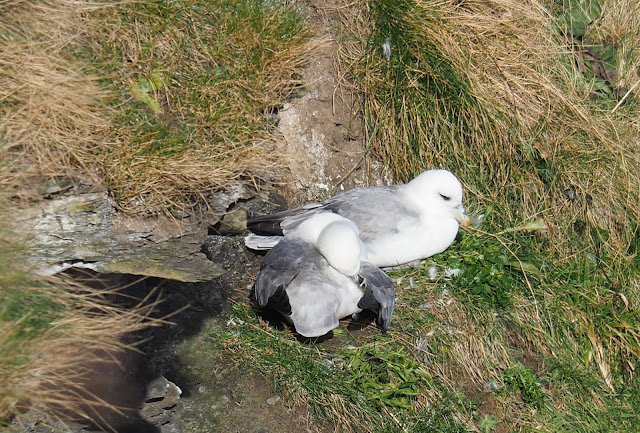 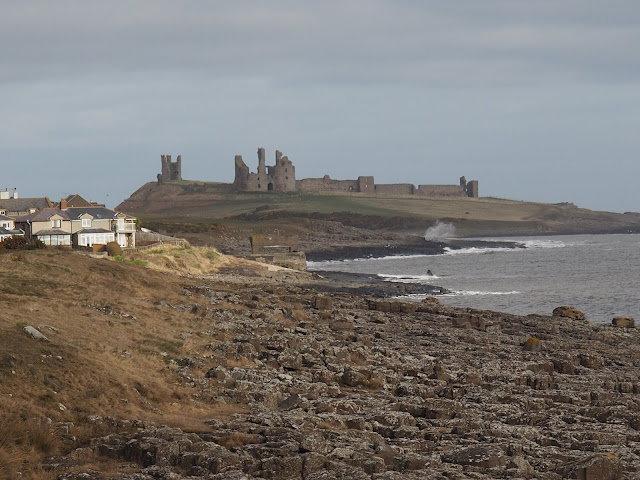 Approaching Craster with a view of Dunstanburgh Castle.

We were glad to reach Craster, I was starving. Sheila decided to try a Craster Kipper barm cake. She had never had one before. I did try a bit but I usually get indigestion from them.
The pub was in a grand position with large balcony overlooking the bay. I bet its packed in the summer, the path goes through the grounds.

Plenty of people were milling around the harbour. We found a bench and had a late lunch. I noticed at the side of the harbour garage, a familiar machine. An MF 30 E tractor loader made where I worked in Stretford. I forgot to get the serial number because I could have had a hand in its construction. 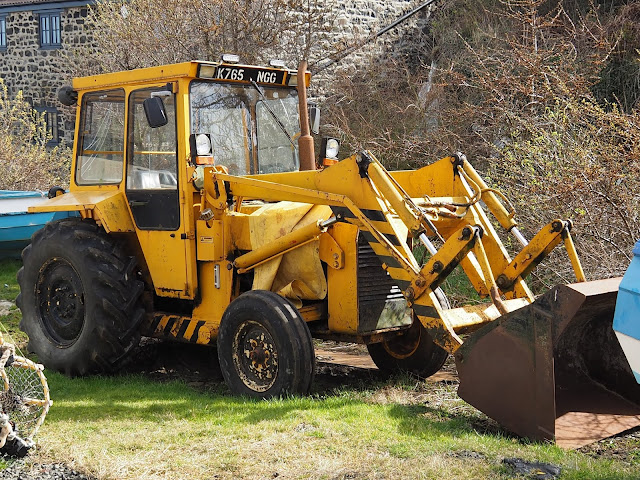 Sheila must of wondered where I had got to as I was missing for about 10 minutes checking this machine out.
Now back to the walk. 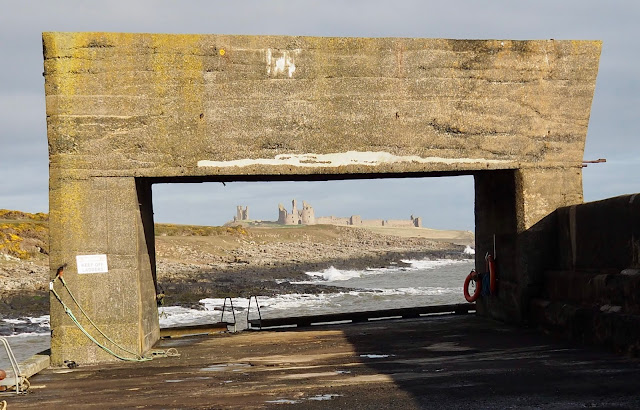 An arty view of the castle from the harbour. (I couldn't get everything level). 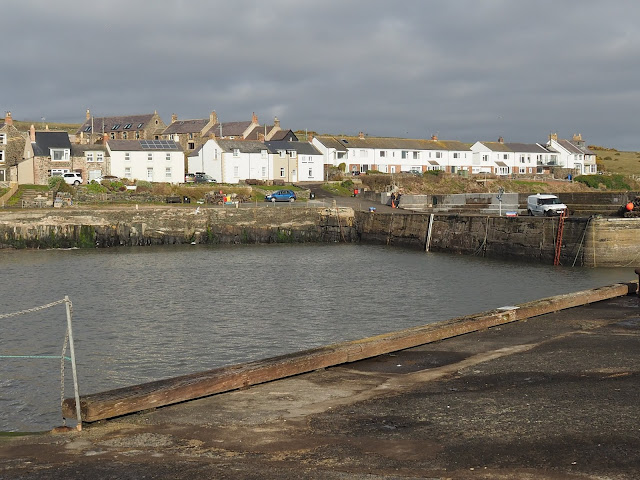 The sign in Craster said that the castle was closed. So we walked up to it and around it up to the point where the sheer drop of the east side puts a halt to progress.
We saw quite a bit of it and to be honest I wouldn't pay the asking price to go inside if it had been open.
Beyond the castle is the golf links where we stopped for the day and returned to base. 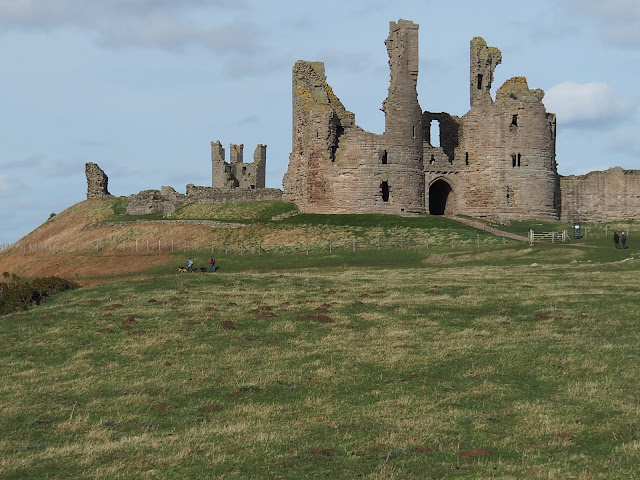 The ruins of Dunstanburgh Castle.
English Heritage would make more money keeping it open during daylight hours and just putting a donation box at the gate. Its not in a fantastic state anyway and not worth the money in my opinion. 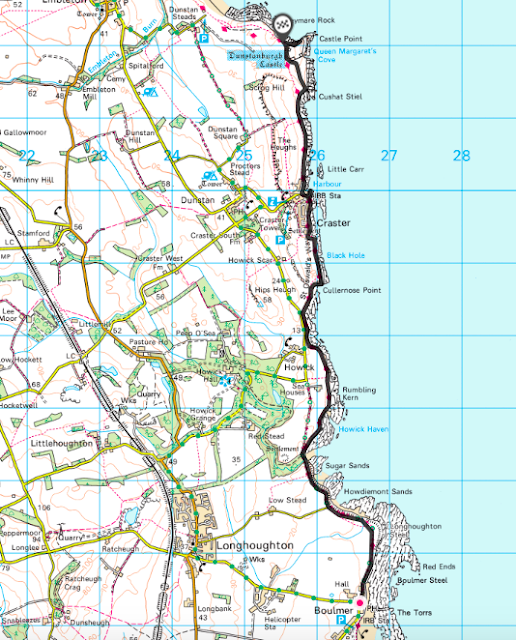 Those beaches and seascapes are a well kept secret.

I had b and b at Dunstan, off route and a bit further on from Craster, but I too referenced the kippers:

"Craster is famous for smoked kippers. A smoked kipper pâté starter had to be sampled. Unfortunately I had some of the stuff on my fingers and kept getting whiffs of it during the rest of my meal."

What? only one tractor today.
Lovely photos though.

Hi Conrad. I have just read your journal of the trip. Very interesting. I probably read it in 2016 as well.

BC. Yes, sorry only 1 tractor today. But a good one. More tomorrow.

Hi Alan, what a shame that walk was curtailed. At least you made a start!
We were very lucky with a weekend at Ilam a week earlier, and with the LDWA's Two Crosses walk on 15 March. Since then I've not done a lot apart from a daily jog and a bit of gardening.
I'm trying to continue blogging, as my mum gets anxious if there isn't anything for her to read when she gets up every day!
Hopefully we'll be able to get together when all this is over.
We very much hope that you are keeping busy and staying well.
Very best wishes
Martin and Sue

Hi Martin.
We did most of it, but you're right the enforced stoppage was not appreciated. Not just the walk itself but getting my walking head back on and improving physical fitness. The last year has taken a lot out of us.
Hopefully this worldly mess will not last too long. We had quite a few plans sketched out, nothing cast in stone. We are taking life one day at a time.
We are keeping busy. There's loads to do a home that has been neglected. The trouble is I need to get out to building merchants or B and Q and that's a no no.
Thanks for your best wishes. We wish you the same.

Hi Alan
I'm enjoying your blog of the Coast Path. I've ad the guidebook out of the library n a couple of occasions...but not got any further. I now the coast quite well, I considered backpacking it but it sounds like it's not the best plan.
Trust you're putting up with the lockdown OK.
tek care.
Alistair

Hi Alistair, I think it can be done but some stealth camps will be required. Usual thing, set up late, move early. Water isn’t too hard to come by but you may have to carry it to camp.
I will put my thoughts together at the end of the last blog post.
Re lockdown. I’m not handling it well, but am complying. Cutting short the coast path was difficult to do.