We arrived in the Duddon Valley on Thursday afternoon and set up base camp on Turner Hall Farm. It was extremely quiet and Hillary (Proprietor) was laying shale to a new area for car parking. I said i would give her a lift after we had got the tent up.
Tent quickly erected, i got the excavator going and flattened off the shale and compressed it down ready for the weekends campers to drive over it.
Sheila had a doze i think, whilst this activity was being carried out. 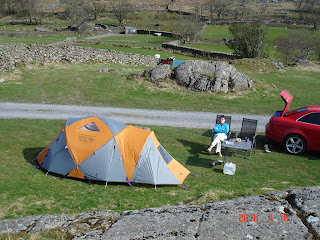 Later we met up with some friends in the Newfield Inn for a couple of beers.
Thursday night proved to be a cold night but the sun was warming the tent nicely as we awoke.
We had decided to do a walk round Stickle pike and Great Stickle today. This is not a difficult walk by any means but it was one that we had been meaning to do for a while so today was the day. 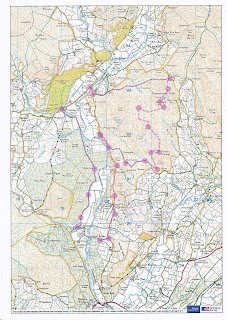 We parked low down in the valley bottom near to Cinderhill Beck and from here walked south along the road to pick up the track signposted on the left.
This is a excellent man made track up into the hills. I believe it's origins go back to when peat was cut from the boggy fells and then brought down by this track. 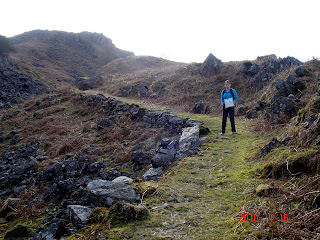 Eventually the path leads to Hovel Knot, a promontory below Great Stickle with good views. 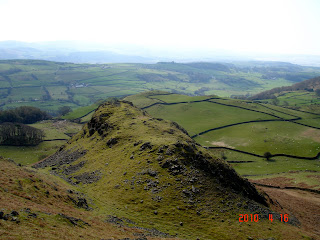 From Hovel Knot its only a short walk to the trig point on top of Great Stickle  from where we could see our next top Stickle Pike. 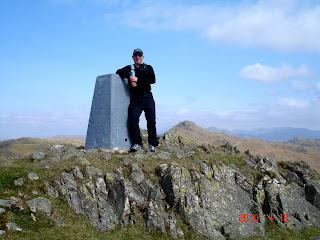 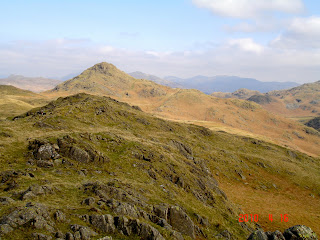 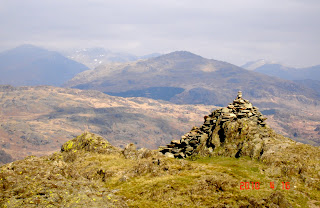 From here we carried on north until we joined the road at Kiln Bank cross and then found the track which leads to Birks and Ulpha bridge.
It was getting to be a really warm day and so as we dropped down the secondary layer came off.
Crossing Ulpha bridge and then turning left on a minor road we came across a field full of Daffodils and then a little further on the path is found, through a gate opposite the old Bobbin Mill. 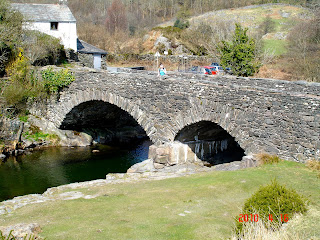 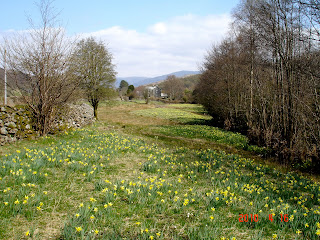 The path from the Bobbin Mill leads through Forge wood and without any difficulties, in about 2 1/2 miles you come to the Wood Mill at Beckfoot. The woods walk is again full of wild flowers and Daffs and will very soon be full of blue bells. 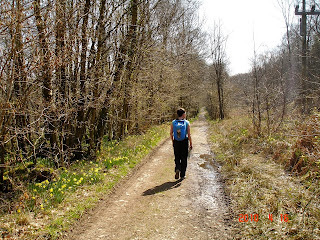 At the Wood Mill watch out for the track behind the mill which leads to Rawfold bridge. It's easy here to walk straight on towards the small hamlet at Beckfoot and miss this turning. 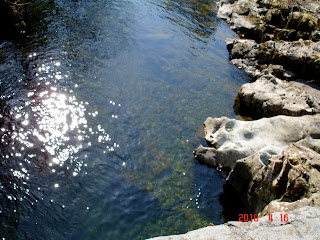 Once over Rawfold bridge the path leads through the gate opposite and then through two fields and up to the road where you turn left and return to the car.
On the way to the car we saw an Adder with a sore head. (It had been run over) 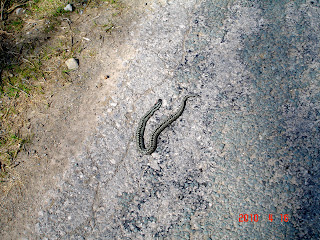 This walk was 15km total and had a ascent of 541 metres and a descent of 543 metres. It's the kind of walk that you tell yourself, I'll save that walk for a wet day. I'm pleased that we did it when it was fine, because the views in all 360 degrees are worth seeing. If it had been a lousy day then the views more than likely would have been hidden and that would have been a shame.
Posted by AlanR at 4:18 PM

Moved! There must have been a volcanic eruption.