Hydration and a new filter bottle.

As we all know hydration is a major issue to Hikers and backpackers everywhere.
It's always on the mind of backpackers as to where to find a good supply of clean drinking water for evening meals and brewing up.
Boiling the water kills pretty much everything, but you don't always have the time or the inclination to boil water just for a drink on route.

Since i started hiking i have never been overly concerned about drinking directly from streams in the hills.
I have never suffered any bouts of illness.
Over the last couple of years though my attitude has completely changed and i regard most streams/becks etc as potential hazards.
You just never know what's died in it further up stream or what contaminants have found there way into the water course.

I like many others, bought the Travel tap from Backpacking Light UK to give us some piece of mind.
I was so pleased with the results we got from this filter. Then on one adventure i noticed that it was dripping from the  outlet.
I had a check of all the fittings and all seemed well except that the O ring was a bit worse for wear. I thought that this might be the problem.
I contacted Bob at BPL and explained. He kindly passed me on to manufacturers at drinkSafe systems.
I explained the problem and they sent me 2 new O rings.
I fitted the new O ring and at first i thought the problem had been resolved as it didn't leak but then on the 2nd fill it did leak.
I unscrewed the filter to check its position and when i re fitted the filter the thread broke off from the body. 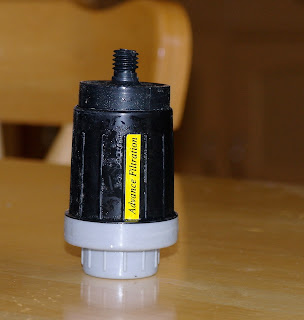 After paying £35 for this kit i must admit to being a little upset. Who wouldn't be.

When you have a good look at the area where the threads finish and the body begins there is very little material here for such a heavy component, especially with the hole running through the centre of it as well. And a component that can get tossed around in the rucksack.

I decided not to replace it with another, but to have a look on the internet and see if i could find a different one and i did.

It's called the Super Delios. I ordered one which cost me £29.99 + P & P £2.80 and it arrived the very next day. They contacted us via email within 10 minutes, saying it had been shipped. You cannot ask for better than that.

So do i think it's a better buy than the travel tap? Well i do actually. And here's why.

First the cost. Its £5 cheaper.
The filter itself is 0.2 microns so no difference there.
The weight.
Travel tap including cool bag. 267 grams 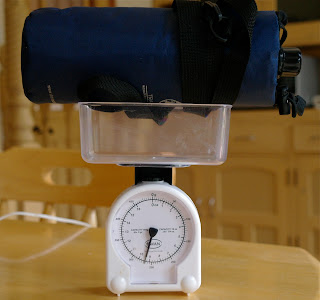 Super Delios including protective bag which isn't a cool bag i must say. 72 grams. A saving of 195 grams 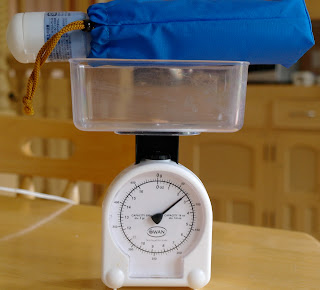 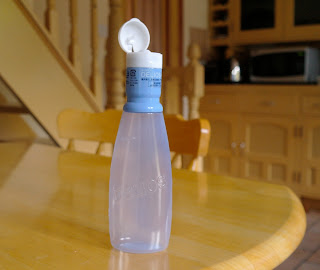 Also the filter assembly locates on the outside of the bottle rather than taking up room within the bottle. and there are not protruding threads to damage or in my case, to break off.

When you have just an empty bottle the Delios bottle will collapse whereas the Travel tap retains it's bulk. 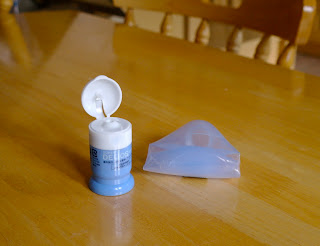 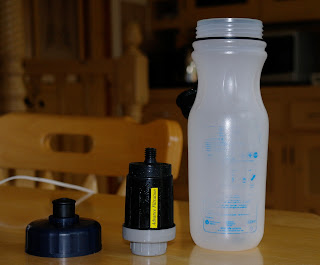 The bulky travel tap.
The capacity of the travel tap is 500ml or 650ml depending on which bottle you have whereas the Delios is only 350ml.
But for me this is what clinches it. The Delios filter will fit onto all Platypus bags or bottles so the capacity however large or small is your choice. 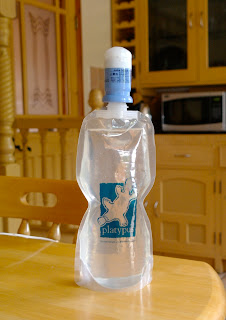 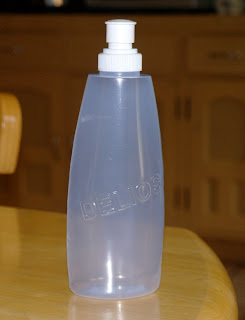 There are 2 filter types available one is a squeeze pressure filter and the other is a base camp gravity drip feed. See web site.
I am impressed with this filter system and pleased to have found an alternative.
Maybe Bob will look at stocking it in the future.
Posted by AlanR at 1:59 PM

Thanks for that Alan

My travel tap has been fine so far (A TGO Challenge and a foray to the Pyrenees) but it's good to know about the platypus bottles can be used with this system - far more alternatives for different uses, and less weight.

No probs Alan. I think this is a fine piece of kit. Just having the alternatives like you say, will suit everybody's needs. And the main thing is the 2 micron filter spec is as good as any.
Nice to her from you again. Was it a long stretch?

I have the original Aquagear bottle but to be honest it's a bit of a pain as the base screw cap tends to pop off when you try to squeeze the bottle, in addition the capacity is to small. I did however switch to the Aquaguard In-Line filter, bought direct from Drink Safe Systems which is extremely versatile but of course much heavier than your Super Delios.

Does the Delios filter fit a standard PET bottle such as a plastic coke bottle?

Does it filter murky peat stained water in the Pennines like Kinder Scout for example? Looks a good alternative to the TT.

Alan, sorry for an error. I put 2 micron filter. It should have been 0.2 microns. Only a little but it makes a big difference.

Mac E, The bumf says that it can be connected to any off the shelf PETE bottle.

Martin, I have only just received this kit so i havn't tried it out with Kinder water as yet. Next week i will try it and let you know.
My gut feel is that it will clear it, as the colour is basically organic, ie peat.

Look forward to the results Alan.

The Drink-Safe filters don't remove the colour from peaty water but it tastes ok.

Mac E, That is a surprise. When in Scotland this year i had a definite improvement in water colour with the drinkSafe filter.
Anyway i will find out soon if the Delios does or not.
The colouration won't do you any harm in any event.
There are many rural households that are not connected to mains water supply that live day in day out with this colouring without effecting their heath.
Just look how good Lindow Pete looked after 2000 yrs! ha.

Alan, I should have said it doesn't remove all the colour, there's still a slight tint but once you put coffee powder in it everything looks fine ;-)

You're right about living without mains water, I did until we got the mains when I was about 14 and it didn't do me any harm. Ha Ha Ha >:~

I have the original Aquagear bottle and it has been fine so far, although I agree with Mac E's comments. Since I'm planning to buy an additional filter bottle your post has appeared at just the right time! Thanks Alan.

Hi Gibson,
Today we went up onto the pennines and i brought back some peaty water to do a test.
I will post the results ASAP.
Glad to have helped.

It looks more elegant than the Travel Tap. It should be easier to use as well combined with a Platypus as it will be easier to squeeze the water through. Very tempted to get one to try. I can't understand why anyone bothers to use Aquamira/chlorine/MIOX/iodene/Ultraviolet/pump filters when these are available.

I couldn't agree more Robin and my next post should convince you to get one.

I used a Travel Tap for about 3 weeks earlier this year.

It leaks and also the flow-rate really isn't good enough for a thirsty walker.

On paper it's a nice bit of kit, but in the field I found it lacking.

I'm off for a few days in the Peak District next week, I'll give it one more chance.

Alan - I have just come across your blog - I started myself a month ago. Interesting product - I have had a Travel Tap for about 18 months now and I find that this does leak sometimes - if I screw it up really tight it stops this. I like the idea of attaching the Delios to my platypus.
Cheers
Mark

Hi John,
With the problems i had with mine, and the cost i decided to look around for an alternative. Hence the Super Delios.
I really like it's versatility.
Obviously the proof will be in the testing over a period of time. Robin at blogpackinglight is testing his out this week i believe, so his report will be of interest....Alan

Hi Mark,
In my opinion the SD's overall operation is better than the TT. Stay posted for updates.
Thanks for viewing my blog, i will have a read of yours now that i have the name.

Ordered my Alan. Lighter than my Steripen and no batteries to fail on a trip. Cant wait to use it.

I hope you find it a benefit Martin. The weight is good isn't it.

I currently use a platypus hoser which I have attached an in-line filter to. The whole set-up weighs 180g but allows me to simply tilt my head and drink. I like it but of course it's more of a pain to fill up as the bladder is inside the rucksack. This is a nice alternative - thanks.

I did use a bladder in the rucksack for a while but i found it too much trouble. I just bought a bottle of water and kept it in the rucksack pocket.
Then i went to the T Tap and well you will know the rest of the story.
I think that the SD is a viable alternative but i and others will be interested to see what Robin @ blogpackinglight makes of it in his report due soon.
Thanks Maz for your comment.