Gosforth to Seathwaite, Duddon in 3 parts.

It's strange being away from the keyboard for so long, you miss so much of what is happening and things move fast in the blogasphere.
I have just found out about Alan Slomans injury. We both hope he is progressing and wish him well. I know what he is going through. I once was climbing a wooden stile with a fishing basket when i slipped and landed leg first onto a double barbed wire fence. It wasn't a pretty sight. I now have a 3" (75cm) scar on my calf. Why is barbed wire used so much? Is it to keep animals in or out or is it for humans to injure themselves on. It's a kind of keep out or else message i know, but we cannot put it on house fences can we.
Anyway enough of that.

Sunday the 19th September was the planned start day for my walk to Seathwaite in the Duddon valley from Gosforth in West Cumbria. In mileage it's no great adventure, in fact i had done it before in less than a day and a half. But the plan was to meet up with friends on tuesday evening and plan a day walk for Wednesday.

I looked out of the house window at 8.00am and it was dark and raining hard. One of those days when you just want to get back in bed and pull up the duvet.
Anyway i was going to go so i made breakfast and final kit checks and i was away for 10.15am. It was still raining as i shut the front door and headed for Wellington bridge.

My route was to follow the River Bleng to the head of the valley, go over the watershed between Seatallon and Haycock, drop down to Nether Beck and camp somewhere along Wastwater.
I knew the river would be high and i was not wrong. It was flowing at a good rate of knots. As i climbed steadily up the forestry path the visibility and the rain was getting worse and i knew that my planned route would have to be changed. 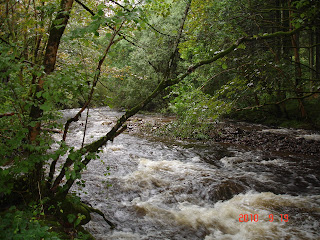 As i approached the open moorland the visibility was very poor, i hadn't met any other people and all i had was the company of some very sad looking sheep. The path was getting more like a river with every stride. Thankfully my Goretex socks were working well. 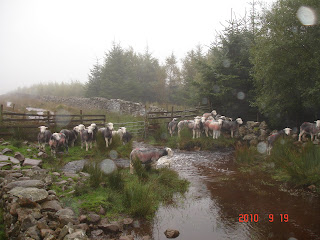 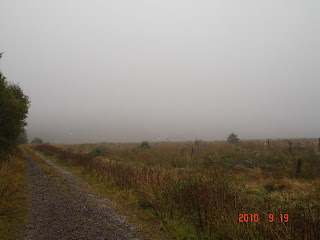 The view (or rather no view) over to Haycock.
I decided to backtrack out of the mist and leg breaking old forestry land and take a right (SSE) at the head of Blengforest and make my way down to Harrow head via the Windsor farm track. From there i would go through Gill and head for the campsite at Nether Wasdale.
The track was now a beck as i made slow and wet progress. 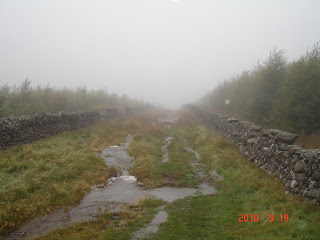 As i approached windsor farm the track was very slippery and the usually tiny beck was in full flow. I carefully picked my way down to the road and turned left. 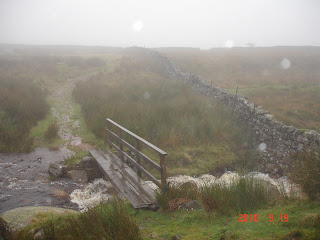 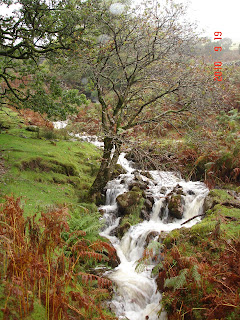 I took the footpath passing Gill farm and headed for Gill Wood on a good path. As i turned around the mist had started to lift a little on Buckbarrow and one of the many new rivulets appeared into view. 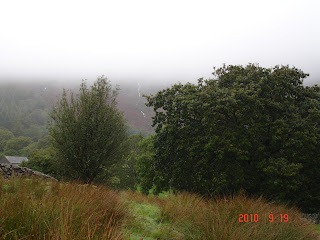 As i reached Church Stile camp site it was obvious that not many people were braving the weather. There was only 2 tents on site as i checked in. I paid my £7 and headed off to the Screes pub for a coffee prior to erecting the tent and having a shower.
I picked my spot carefully as the site was quite boggy in places and lots of standing water.
I had been trying out a new 230gr GoLite brolley today and i must say that it had done me proud. It had kept a lot of the heavy rain off me and my pack and it never once tried to turn inside out. I was pleased to find that my Icebreaker Merino top was only damp. My brolley was a nice shade of green and not Chrome as the link depicts.
I got my sleeping gear sorted and got my cooking gear set up ready. The rain was diminishing so i decided to go for a stroll down to Wastwater to pass another hour.
Roll on tomorrow.
Posted by AlanR at 2:48 PM

Nice post! The solitude the rainy weather offers can be quite enjoyable.

I have a question concerning the umbrella: do you carry it in your hand, or is there a way to attach it somehow to your backbag? My inner engineer (no, I'm not an engineer by education) tries to say that when it's not windy, it should be possible to attach an umbrella to the backbag so that the hands would be free.

Cant wait for the next episode x

Maria,
Thanks for your comment. I quite enjoy walking in the rain as long as it isn't too windy.
I carried it all day and it wasn't a problem with it being very light. As i walked i did think, i will look at ways to attach it, but quite right as you say, only on windless days would this be possible.

Lisa, Thanks and have a good holiday. Don't forget to climb the pyramids.
Pt 2 pending.

Mike.
Mad dogs and Englishmen will go out in anything and i know that you are one of those types.

Umbrella! I am impressed. I dont know if I would want one. But they seem to work fine. Read another account of one being used recently.

Martin,
I was sceptical and thought this is going to be a pain, my credibility is going to go down the pan. But i will do a short gear review in a day or two and reveal all...Alan