The Peak District is a strange name for an area that has no peaks. It has steep hillsides, deep gorges, rolling hills,moors, craggy outcrops and more, but Peaks, no. I wonder where the name came from.

Sheila and I descended on Tideswell village on Friday lunchtime having booked into The George Pub for a couple of nights.
We were told to have a look at the caving pictures at the Red Lion in Litton so that was where we decided to partake in lunch.
It was a surprise to see just how busy this place was at lunchtime for such a small village. Although it's easy to see why, with the roaring log fire, cosy rooms, splendid pictures and good menu.

After lunch we headed off to to the village of Eyam, the village of the Plague of 1665 - 1666. It was horrendous for the village where almost 300 souls died of the Bubonic plague.
It's hard to imagine now that your next door neighbours all died within a short space of time in a ghastly way.
The fear and despair that must have come between families at some point is difficult for us now to comprehend.
How much grief was brought about by the tiniest of flee's jumping from rat to rat and then to human's.
It's now a lovely village, with lots of history, a museum and Parish Church where the Plague story is. revealed.
But the houses of the victims are still there and are occupied. I wonder what they think now?

We planned our walk for Saturday, a circular walk from The George.
The Church of St John's is adjacent to The George and there is supposed to be a stone cat crawling along a high ledge somewhere on the church building so we had to find this before we set off.
It took a couple of circuits, but we did find it. 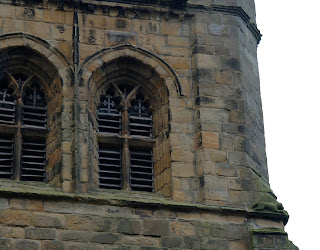 The cat on the ledge. Church of St John's Tideswell. 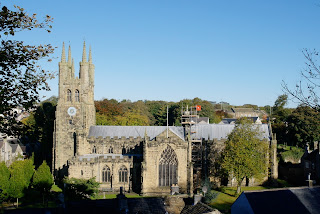 The lovely church of St John's Tideswell.
The route leaves the village from an alleyway behind the Co-op store and passes the rear of the Star pub into Market Square. There is much of interest to see on this first 200yds, with the many old mullioned windowed buildings and the narrow alleyways.
You pass on your right the Old College and Rockingham house which used to be the Drop Inn pub until it closed some 20yrs ago.
On the left is the Oddfellows and Bagshaw Hall. Bagshaw Hall was built in 1872. Later to become the cinema but now it's a private residence.
On the left, passed Bagshaw hall is a small alleyway that leads up to Sherwood Road. At the road junction with Summer Cross continue straight on until you come to the house on the left, Sunny bank.
Look right and you will see a stile leading into fields.
I have explained the approach to open country in detail because we found it can be quite challenging, especially if you are new to the area.
The remaining part of the walk is easily followed on the route map below and in conjunction with OS explorer map OL24. 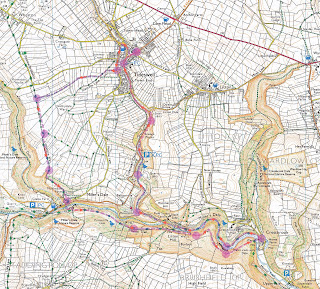 The route map.
Having crossed Slancote lane and quite a few field walls the path joins the Limestone Way where you turn south on a good track down into Miller's Dale. 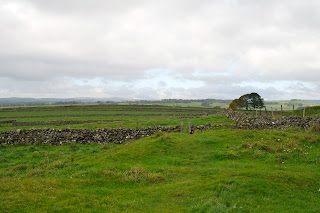 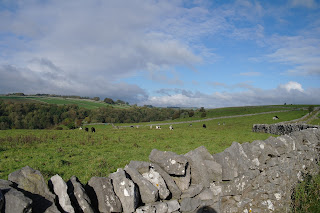 View west over to Monk's Dale (in the Trees)
As we approached Monksdale farm we stopped for a chat with the Park Ranger for 10 minutes and then headed down to the River Wye. Crossing the Wye by the footbridge close to the Angler's Rest pub. 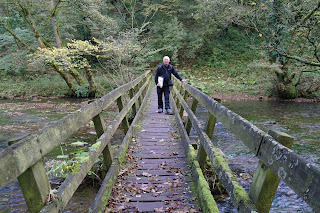 Footbridge over the River Wye at Miller's Dale.
A path rises steeply after the bridge and joins the Monsal Cycle Trail. The disused railway line.

For Information Purposes.
The Monsal Trail follows the path of the former Midland Railway from Blackwell Mill cottages to a point about 1km past the former Bakewell station, a distance of about 20km. For the most part the trail follows the path of the River Wye, which means it offers some spectacular scenery. The eastern end of the trail is accessible by bicycle, but the western section is not, for the section around Chee Tor is quite difficult even when walking, and the section between Litton Mill and Cressbrook Mill follows a concession path on which cycling is forbidden.From the western end, approach the trail from Wyedale car park at Topley Pike. About 1 km along the track you reach a second railway bridge and a path leads up onto the former track. You can follow it down a further 2 km in the magnificent surroundings of Cheedale before reaching a tunnel through Chee Tor, which is closed as being unsafe.The path detours along the river, which is difficult going and includes stepping stones which can be well underwater in flood conditions. The path picks up the railway track again near Miller's Dale, where you cross the Wye by the imposing viaducts. The section downstream gives fine views of Ravenstor and leads to Litton Mill, where another closed tunnel blocks the route. Here the usual route takes a concessionary path along the riverside to Cressbrook Mill, with more fine views of the scenery, but this path is closed to bicycles. (A cycling route would be to go up the green road to Cressbrook Church from Litton Mill and back down the minor road to Cressbrook Mill - but this is steep both up and down).At Cressbrook the trail crosses the river and regains the railway track which is followed down Monsal Dale and across the viaduct to another closed tunnel. This time you have to climb right up to Monsal Head and follow the small road opposite into Little Longstone, where a path across the fields allows you to regain the railway track.The section from Longstone is relatively uneventful and is the only section which is suitable for normal cycling. It follows the railway track all the way through Hassop station to Bakewell, easy cycling if you are on a bike, pleasant walking if you are on foot. Cycle hire is available near the former Bakewell Station, which the Peak National Park have renovated as an information centre. The trail continues a short distance beyond Bakewell to terminate at the Coombs viaduct not far from Haddon Hall.

Once our route has joined the Monsal trail we turned East and it's very pleasant easy walking with good views along Miller's Dale. 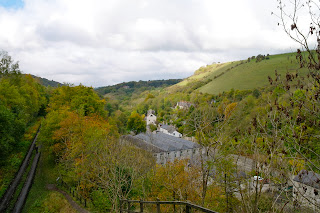 Litton Mill from the Monsal Trail. 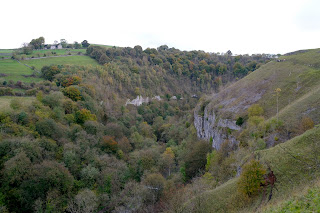 Miller's Dale from the Monsal Trail.
Soon the old railway path comes to a closed tunnel where the path climbs up above the track and opens up some terrific views of the surrounding area. 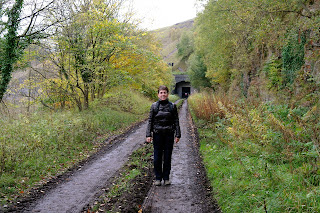 Sheila on Sentry duty near the closed tunnel on the Monsal Trail.
Also posing in her new down jacket.

The path contours the cliffs which are known to be have many fossils and our way drops down to Cressbrook via the fantastically named "Water-cum-Jolly Dale" and across the footbridge to D's brew stop. 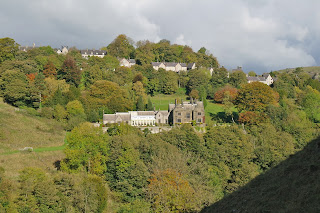 View across the dale to Cressbrook with Cressbrook Hall in the foreground.

D's brew stop is a wonderful little place to have refreshments, tea, coffee etc and it works out roughly the halfway stage of the walk. He allows you to eat your own food on the premises but there is food to buy if you wish. Cakes and biscuits for example. There is no Loo and he doesn't take credit cards.


Onwards refreshed, the path follows the River Wye back towards Litton Mill keeping to the river edge. 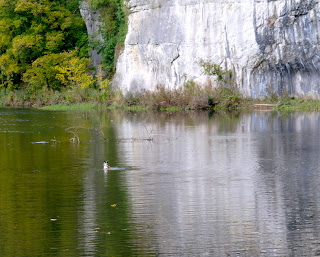 The River Wye near Cressbrook.
The river prior to reaching a silted up section close to Litton Mill is wonderful with lots of water fowl and trout. 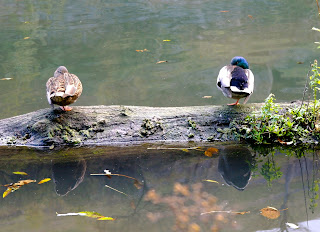 As the Mill and the Field study centre is passed, a track bears off to the right which is our route up Tideswell Dale. The river becomes free of silt again.


The track is wide and easy and through farm land. Soon we reach the car park and picnic area. Carrying straight on through a lovely section of Beech/Alder trees. 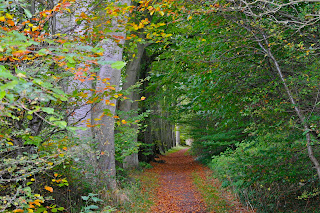 From the car park area there is a permitted path through farmland heading north and exits where the main road meets the road from LittonDale. 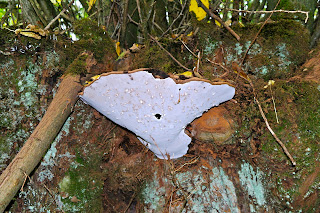 Large fungi, i think this is Alder Bracket fungi.
Cross over the road and follow the road back into Tideswell. 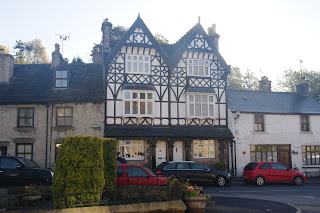 Alan - my understanding is the Peak District is named after an Anglo Saxon tribe that inhabited the area the Pecsaetan (I think that is how it is spelt) or the Peaklanders. :)

Cheers Mark, I never knew that.

Another theory about the origin of the name 'Peak District' is that it is named after the Picts; a tribe which inhabited the region long before the Anglo-Saxons came along.

A.Lee Firth,
Thanks for the comment. You would think that the name would have been definitive by now wouldn't you. ..Alan