I slept really well, it had been quite a warm night so i slept between my Neo-Air and sleeping bag. It was 8.00am and all was calm. I checked the weather and although there was some low hill fog to the East and a bit grey it was certainly the best morning so far.
The walk from Hollins campsite in Eskdale to Seathwaite in the Duddon Valley is not a lengthy walk so decided to lie in until 9.00am and then hopefully the hill fog would have lifted, giving me some good views. 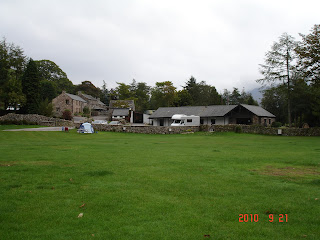 The campsite has a few picnic benches scattered about so it was good to have a seat while having my bag of Muesli and pan of green tea.
Glimpses of the sun breaking through gave me hope of a good day and it was pleasant that the tent was dry. No condensation at all.

Packing up at a leisurely pace and checking my pitch for anything missed i set off to reception to buy a drink for the walk and i was away for 10.15am. (another early afternoon start Mike.)

My route today would take me passed St. Catherines church and along the River Esk as far as Doctor bridge. Leaving the river here to pass Penny hill Farm and then take the rising path to the West of Harter Fell. Over the watershed between Eskdale and Dunnerdale i would pass Grassguards and take the good track over to High Wallowbarrow. Crossing the stream by the stepping stones if the water was not too high and then through the lovely deciduous woodlands and into Seathwaite.

St. Catherines church at Boot dates back to the 12th century and is well worth a look round the interesting features and the unique gravestone carvings. 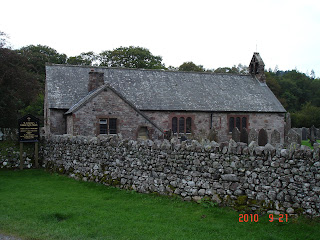 I spent about 15 minutes here and then i was alongside the River Esk which was flowing rapidly and was quite high due to the rains of the previous days.
It's a pleasant walk along the banks and i met quite a few day walkers.  To the north there is a fine aspect of  Great Barrow. 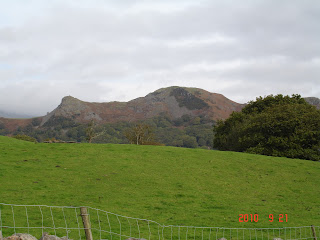 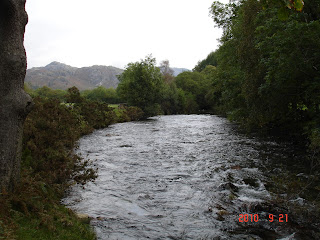 At Penny Farm there is a sign telling you to take the permitted path to avoid the farm yard which i did and after a short distance the path turns up hill. It's quite easy to miss this turn off as the path onward to Hardknott is more prominent.
As i gained height quickly, i could see Hardknott and the Upper Esk valley was starting to clear of mist. Maybe i would get some views after all.
The path up to Harter is quite steep in places but the views were improving. I stood and watched the hill fog drifting up and over Bowfell and i thought that if i stayed here a few minutes it might clear enough to get a photo and thankfully it did. 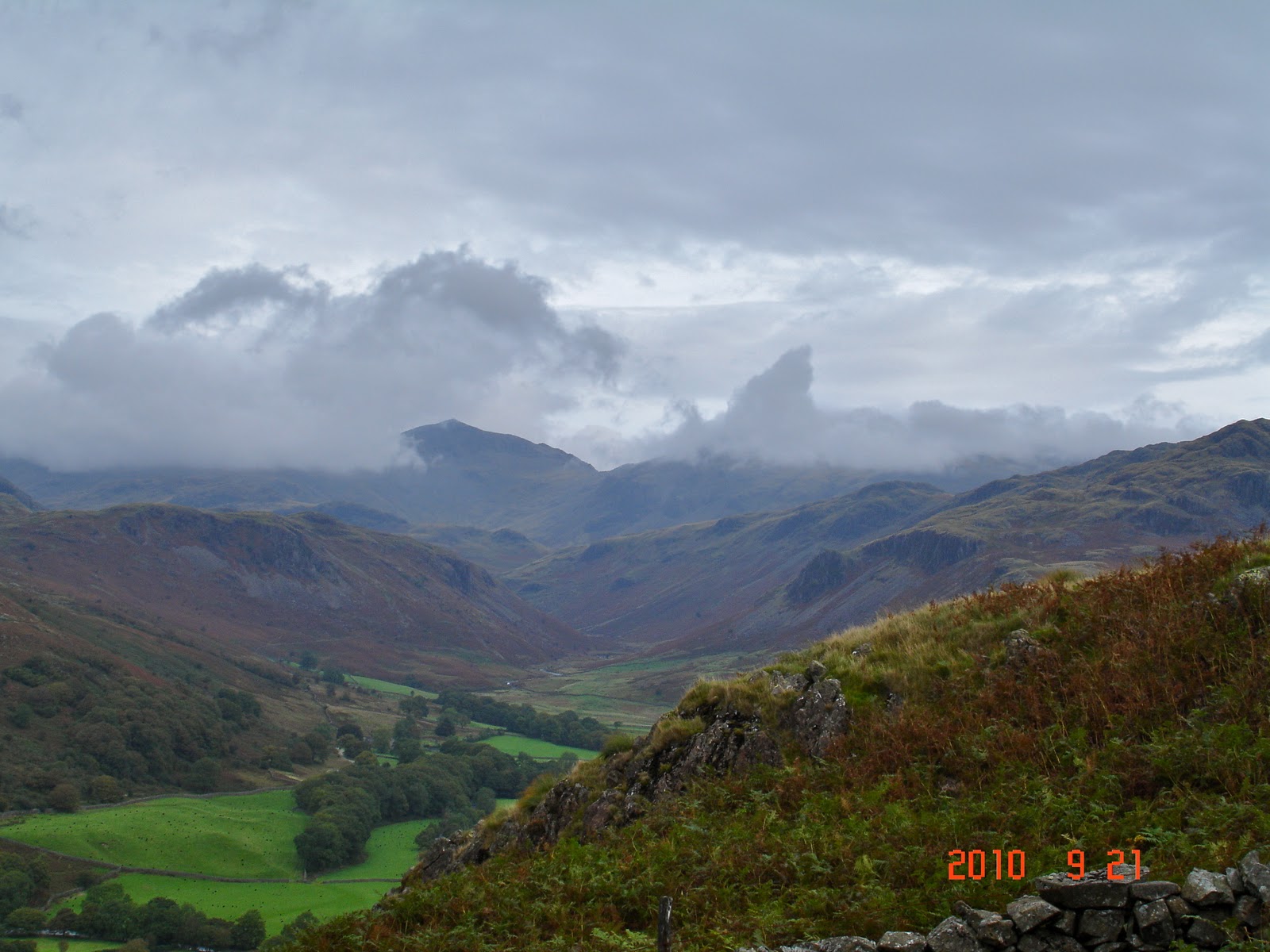 The view lasted for about 2 minutes and i thought about the people who would be on Bowfell at that moment having a view at last.
As the path levelled out just prior to the fence line i noticed one or two nice wild camp spots and marked them on the map for future reference.
Crossing the stile onto Harter Fell the path was decidedly boggy and a few detours had to be made to avoid the morass. 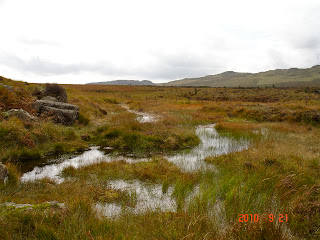 I know this area well, so it was no surprise to find the path being boggy, but it was atrocious.  Especially the area which the Forestry have cleared and has now deteriorated. It was a slippery obstacle course.
This route is a bridleway and it wasn't that long ago that horses used this regularly but it isn't possible to get horses over it now.
I mentioned this to a member of the Fell Race committee upon arrival in Seathwaite as it is part of the Duddon Fell Race route. Something needs to be done about the path.
So having bog trotted for an hour i came to Grassguards where another diversion path is made to avoid the yard. The 3 dogs here are really vicious and snarl at you the whole way round. Hope they never get out.
The route from Grassguards to Wallowbarrow is a fine route with great views up and down Dunnerdale and across to Grey Friar, Swirl How and the Coniston ridge. 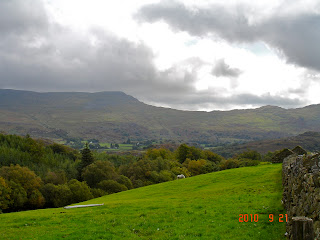 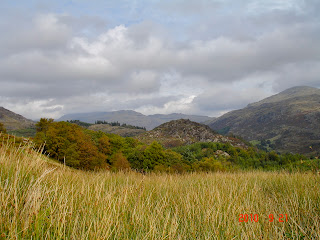 Dropping steeply down to Wallowbarrow farm i met the only walkers of the day. (that's on the route as i did meet a few folk along the River Esk)  A couple out for a day walk up Harter Fell and an elderly backpacker with an ancient cotton Karrimor rucksack. Good on him.
Taking a left turn through the farm gate the track curves away through the woods to what is known locally as the RAF bridge but i was going to go over the stepping stones a little further round. I had a good look at them and considered that it was ok to cross. 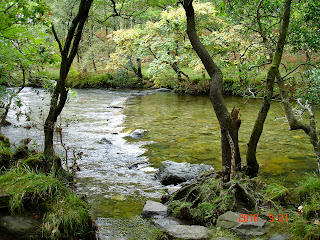 Once over i followed the river round to Waters Meet, this is where the River Duddon meets Tarn Beck. It's a great place to swim on a summers day, but not today. There is another stepping stones crossing point here but they are rarely used nowadays and today they were well under water, so i used the bridge 100yds up stream. 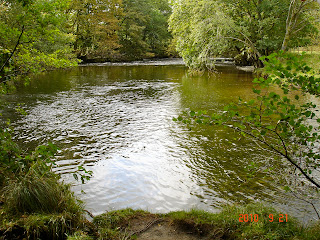 Once over the bridge and through the gate, turn left on the road and the Newfield Inn is found. I called in for a Cumberland Sausage baguette and a coffee before calling on friends Alan and Tina at the Croft.
They very kindly invited me to stay for Supper tomorrow and the next day prior to Sheila picking me up. 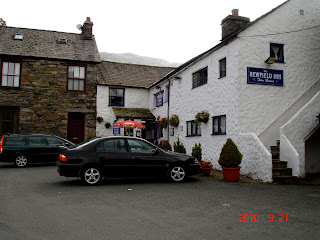 Alan told me that the walk planned for tomorrow with the "Last of the summer wine walkers" may now not happen as the weather forecast was poor. But a few phone calls at 9.00am tomorrow would sort it out one way or the other.
We arranged to meet up later for a beer and i was off to Turner Hall farm to get the tent up and have a shower. It was quiet on the site with only 4 tents as far as i could see and my pitch had good views up the valley and of Dow crag and Grey Friar. 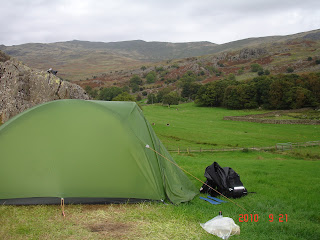 It has been another lovely walk apart from the boggy path across the watershed. I had only slipped 3 times, but it had stayed dry and it had been quite warm. Very enjoyable route all said and done.
Posted by AlanR at 9:19 AM

Even when the weather isn't great, the Lake District is still magic. I'm going to explore this corner of the Lakes a bit more, but not until next year.

Hi Robin.
Yes it is picturesque. Just being out of the high fells the contrasting colours make it very easy on the eye, especially at this time of year. I enjoyed it thoroughly.