On our local walk today, taken when nothing else more serious has been planned, turned out to be a massive shock to see that a neighbour, friend and local farmer has decided to blot the landscape with these 2 turbines. 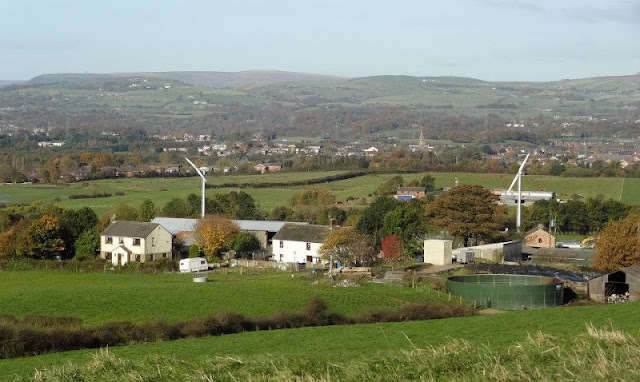 We stood on the hillside, mouths wide open and in silence. It was as though our eyes had been stabbed with a sharp object. It was disbelief.
Then reality struck.
We live in a semi rural community, its said that when you kick one, they all limp. When one buys a big tractor the next farmer goes out and buys a bigger one. You get the drift.
So its not going to be long, weeks maybe, before all our beautiful 360 degree views are going to be blighted with these monstrosities. As i say, the neighbours will have to have bigger and maybe more turbines to make sure they are the Jones's.
War of the Worlds has arrived right in our backyard.

And they are comparative tiddlers, Al. Wait until the bigger boys arrive...

Hi Alan,
It's scary mate. I am dreading what the future may hold here. We have quite a large wind farm on Scout Moor already. If all rural businesses decide that they can make money by adding power into the grid then the area is doomed.
Money WILL override common sense. And another thing is, i never saw any planning consent applied for. Do they not need it?

If all of the businesses you regularly find in semi-rural settings - not just farms but golf clubs, nurseries, stables and such - decide to go down this route, there could soon be mini-clusters springing up all over the place.

I often think of the suburban/rural overlap as a kind of modern day frontier - disputed and uneasy in typical frontier fashion. This development (in both senses of the word) only adds to my disquiet.

Hi Oss,
Yes i could not agree more. And i have found out that planning is not required on a turbine up to 50 ft. Strange when you need it to put up a flag pole and solar panels.

an ugly blight on the landscape Alan

That's really awful Alan. I fear there is no stopping this madness.

It’s incredible Gibson. You cannot look at the view. Your eyes are drawn to these whirling inefficient propellers. You cannot help yourself. Just dreadful.

Whirling? Were they really? Has the technology improved that much?

Whirling, well not today but they will be when the wind blows eventually.