A Cheshire day walk from Frodsham

Today i set off before the sun or the birds were up. My journey started with a 6.10am bus trip to Manchester and then a tram to Timperley to meet up with fellow Blogger Martin and his good lady Sue. From there we headed off to Frodsham and the car park on Simon Lane adjacent to the communications masts.
This walk was the 2nd of Martin's 4 routes he has put together for the LDWA plodders section whilst Reg, the usual guide, is recuperating.
This was my first walk in Cheshire as far as i could remember so it was quite a shock when Martin handed me the map and said i could lead.  It turned out that the map was a joke following on from my last post about the age of Martin's maps.
I'm not saying this map was old but Chester was located and it read Castra Deva.

It was nice to see a good turnout, 10 in all  plus Maude the staffi. The forecast was for a pleasant day. Some wintery showers possible and a strong cold north wind. 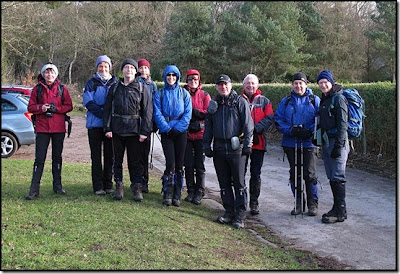 Image courtesy of Postcard from Timperley blog. (Thanks Martin)

From the car park and crossing Simon Lane we joined the Sandstone Trail. A nice walk in it's own right but today we would join and leave it on a number of occasions. Crossing a busy golf course we were warned by a notice board to be aware of golfers. Well we would wouldn't we, being on a golf course. I suppose it was the golfers balls we had to be aware off but it might not be a politically correct statement to put that,being in Cheshire.
The sun was low and extremely bright, it caused me a bit of a problem with photo's. Across the golf course the path followed the escarpment and gave good views across the wide plain, the River Mersey and Manchester Ship Canal to a Liverpool skyline and Helsby Hill with it's iron age fort. The Welsh hills being clear today. 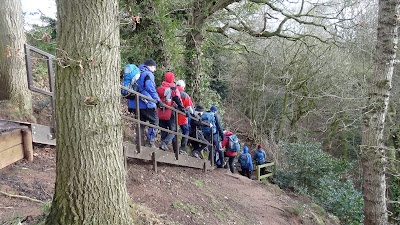 After a brief stop to take in the views we carried on past the hill fort at Woodhouse Hill.
The day was warming up nicely being sheltered from the wind and we made good progress passing a number of splendid rural properties.
Just before we joined a road, Martin called a halt for Baggin. (Tea break). The weight of carrying all those chocolate brownies must have been weighing him down. These were special brownies with very soft and sticky chocolate we were told. Yummy they were too. 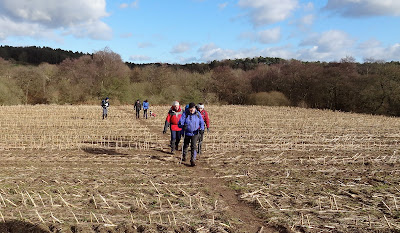 We had a short spell of road walking through the lovely village of Manley where i spotted the very unusual sight of an Egyptian statue. I was expecting a beach but unfortunately that would be 25,000 miles away. 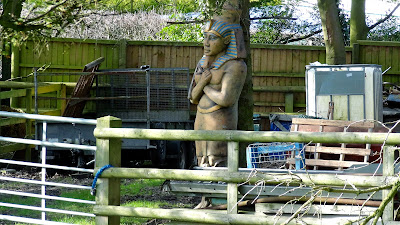 Passing a couple of "open" tea rooms and not turning in was a bit disappointing as my stomach was starting to rumble. We walked under the railway line and then took a detour down a wrong road and had to do a reverse turn. Fortunately we hadn't gone too far out of our way. It would be another hour to the planned lunch stop.
It was good to get back on the trail, passing Eddisbury Lodge and heading into Delamere forest. On reaching the visitor centre it was time for lunch.
I had bought a freshly made sandwich in Manchester and put it straight into my day sack, but when i opened it up it was completely different to what i had asked for. Oh well i was too hungry to care.
Today i had Ginger and Lemon tea in the flask and this was also a first. I have it at home but i didn't know what it would taste like after a few hours in a flask. Pleased to say it was very nice.
Lunch over we joined the Baker Way through Delamere, the colours of the dead grass and ferns was stunning in the bright sun. 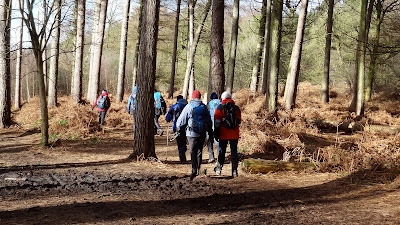 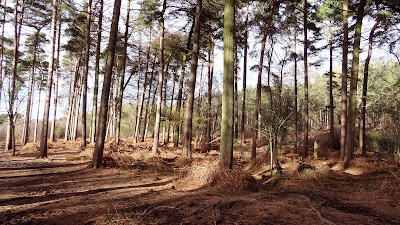 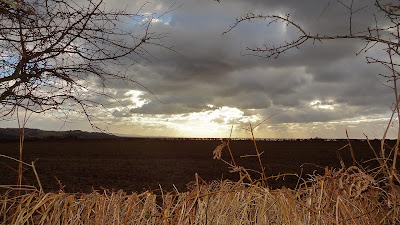 The Baker Way is a good wide track and after crossing the railway we had to swiftly get out of the way of a couple of huge cantering horses. The riders shouting that they were going to turn  our way.
Unfortunately the path deteriorated to a muddy squelch for a mile or so until we hit the tarmac at Kingswood. 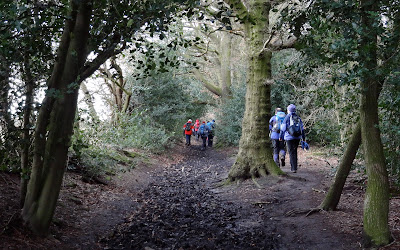 The cloud cover was increasing and the sun behind the clouds looked wonderful with the rays and colours. 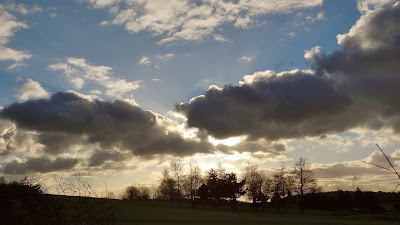 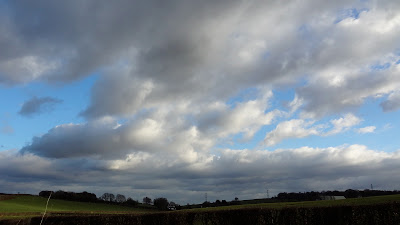 We joined the Delamere Way beyond Birch Hill. On our left passing the high ramparts of a reservoir at Harrol Edge. What feeds the reservoir we wondered as it was the highest point around? A mystery.
The masts on Beacon hill were getting closer as we crossed back along the golf course. 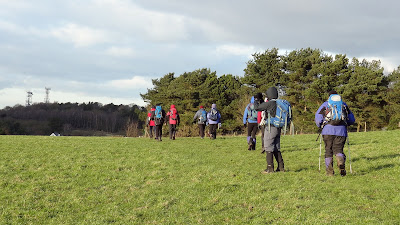 On the opposite side of the fence lots of "lost" golf balls were to be had for the local kids.
With the sun now in a different direction from this morning the view across the Liverpool skyline was much clearer and better for photography. 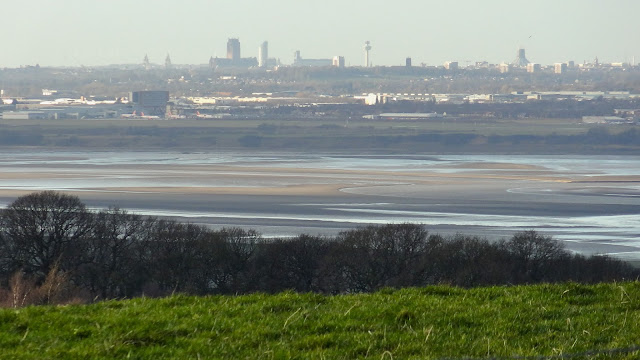 Just one more minor hill along the road and back to the car.

What a good day, no waterproofs required and the obvious lengthening of the hours of daylight. The new boots are doing well with around 60 miles on them so far. 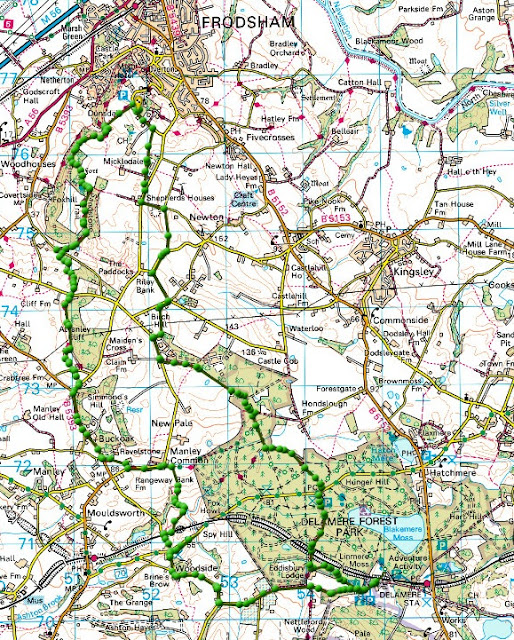 Martin’s post of the walk can be found here

Looks like you were well rewarded for your early rise Alan. Fine weather and brownies as well!

Aye, I managed a full English breakfast in Manchester too. And a couple of pints of Sir Joseph Holts finest to finish. What a great day.

A great day out by the look of things. For me "Frodsham" conjures up days in wintry sleet hammering in huge sheet piles...

As an aside, it's nice to see Gibson commenting here. I must have missed whatever happened. What *did* happen? Will you be back, old friend?

I don’t know what forced Gibson to take the course he has. We just have to respect that it was serious and leave it at that.
I’m sure with him reading this post if he wants to say he will and if not then so be it.
Lets hope he will be back. You can always email him and see if he wants to include yourself within the privacy list.

The photos look great when seen in the enlarged slideshow. I often wonder if visitors to the blog often go to the trouble of looking at the pics that way. I have recently increased the downsizing from 600 to 1000 pixels on my blog and the slideshow pics are now quite a bit larger.


Hi Conrad,
Thanks for looking.
I checked to see if there were any stats about visits to the slideshow on Smugmug but i seems not.
I always look if a slideshow is available for the exact reason you mention. The views are so much better.

Not done anything round that way even though I don't live that far away, only over the border into Wales. You were lucky not to get wet, it was wet all day here on Saturday so glad I got my walk in on Friday

Hi sharon,
Thanks for your comment. A bit misleading on the date i am afraid. I walked Wednesday but posted Saturday. Too much to do and not enough time i'm afraid. Lovely area and good views of the Welsh hills.

I didn't look at Smug Mug, just clicked to enlarge. Have now looked at SmugMug - even better.

I like Smugmug. Even though a small charge is required. It's stable.

There is no privacy list - all the regulars would be on it if there were one. Only Lynne and I have access to it which really serves no useful purpose, so in effect the blog is closed.

All the best to you both.

At the moment I'd say I won't be back but I'll be popping over to your place periodically, just to check that you're behaving yourself.

Hi Gibson,
Sorry about that. When you go on your site it says something like. "you are not allowed on this site, send an email to the author" or words to that effect. I am sorry if you have been plagued i just took it that invitations were by email acceptance only.
Hope you are both well.


Your comments will be appreciated.

The box I ticked says "Your blog is restricted so that only blog authors can read it. Other visitors to this blog will not be able to read any posts; instead they will get a message stating that this is a private blog."

Sorry for the confusion Alan (and others). Not that I've had any emails requesting access!


Thanks for clearing that up.

Hi Gibson,Here is what i get.

This blog is open to invited readers only

http://afootinthehills.blogspot.com/
It doesn't look like you have been invited to read this blog. If you think that this is a mistake, you might want to contact the blog author and request an invitation.

Hope this shows why i said to Alan S to email you direct.

No worries Alan. I'm just sorry that Blogger gives the impression that I've restricted the blog and, worse still, that folks like you and the others weren't amongst those invited.

Hi Gibson, I've been getting the same message as the others. I had considered emailing you but thought you might want a bit of breathing space for a while. Luckily we can continue to meet via the good offices of Alan's internet dating service.

Some nice walking there Alan.

Cheers Dawn,
I wish i could get out a bit more.

Hi Alan
As usual, a more comprehensive report than mine, and good pictures. I'll link from my posting. One or two things arising from comments (eg re slideshows) which we can discuss with Conrad when we meet him on Wednesday...
Greetings, Gibson, BTW, I thought of you yesterday as we drove through your part of the world.
Martin

I’ve been struggling with my back problem for a week and so Wednesday will be my first day out since this posting.
Looking forward to it.

Sorry to hear that, Alan - so that's why you found so much time to make comments!
Wednesday won't be a fast pace...


Yes. Exactly.
I’m still taking the tablets but keeping moving seems to be better than stopping.