The expedition of The Magnificent seven

The word had got out that Martin had found an old map, a very different one than is used today. He asked for volunteers to assist him in the quest of a tough assignment.
I volunteered straight away but was very nearly carpeted at the last minute. Was i spinning a yarn? Was it the pile?

The map it seems had been found deep within a loft space, covered in dust and a bit fragile. The colours faded and the terminology, missing in parts. The important thing and the most significant to the day was this golden line which had been scribed upon it. It was still visible and it happened to go into territory in the far northern reaches of upper Lancashire.

Was this line tracing the ancient wanderings of a lost tribe of creatures, half man half Dolphin. Was it where they had hidden the gold raked up from the sea bed. The great up rising of Nicky Nook or was it Nooky Nick, it was so difficult to translate the old words, seemed to show where the hoard had been probably hidden.

The volunteers from the famous East Lancs club where usually numbers are high were few and thin on the ground. Trepidation at the thought of entering lands that had never before been reconnoitred putting off all but the brave and hardy.
Some souls, dafter , braver than most had arrived so early that the sun had barely risen.  Was it going to be a golden day.

Our chief explorer had a pow wow and ensured that we knew what lay ahead. We scanned the fragile parchment covered in a kind of Verdigris or was it Verdigris Agaric. It presented big river crossing, collapsed bridges, contour lines, vast forests, mines, mills and of course the golden line winding it’s way into the unknown. We couldn’t say no, we had to get to the end, to find that wealth.

We donned our Ventile and saddled up the pony  Staffordshire Bull Terrier. A quick grouping and a flash of magnesium, then with a sharp intake of breath and a shaking of hands we were away. Was this the edge of the known world? What would we find? Would we get back?

It was obvious that the sun God moved around here, all lands around, apart from this area alone was blanketed in winter guise. The green and lush land we were entering seemed almost tropical.

Following a fast flowing river northwards for some time, we came across a deep dark cutting with strange wheeled chariots moving at enormous speed. We passed quickly so as our ear drums were not burst. These were truly scary times.
Beyond was an intricate passage way with hieroglyphics which we soon translated to mean footpath. We entered the passageway to be faced with over friendly natives of the 4 legged variety. At least we wouldn’t go hungry tonight.

At an old abandoned encampment we backtracked, the ground ahead blocked. Picking our way through the camp we found a track that looked good. We checked the position of the sun and realised that this route cannot be right. For some reason we were being sidetracked. Again we backtracked.
We regrouped at the last turn off and checked the map again for signs of passage. Lines on a map suggested we go east and not south east as this was surely the highlighted way.

Vast lakes were all around us and waterfowl enjoyed splashing and chasing each other. We could name some but not all and Maude the Staffi showed great interest in their capture for identification purposes. This was a wonderful place.

We sneaked through what looked like habitation until once again picked up the river that led us to a very strange but beautiful place.  We had stumbled upon the territory of the Dolphin worshipers.
Many pods passed but habitants were scarce. We entered a street with no greeting and we were glad as the doorways were indeed strangely shaped. We certainly didn’t want to encounter the beast that made them or which passed through them.
It gave us great hope as it seems from the pods that there is good wealth here.  Vast buildings, built of expensive stone and hand blown glass portrayed a wealth gone bye. Or had it gone bye. We might cotton on soon i thought.

Picking up the pace we left the area of the Dolphins only to be met by contours of little gap. We became warm as progress again reduced. The sun god, although still with us was becoming tiresome of us and shrouded itself in a grey cloud. We needed a little sustenance in order to overcome the weakening spirit. Very soon we came upon a very smelly dwelling in poor order. Obviously the habitants were not clean like the Dolphins. We huddled in the lea of the wind which was picking up in speed and there had our repast.

We checked the map again and it looked good. Another abandoned building was approached with caution, it was in cleaner condition than the previous one but still in a state of dilapidation. Obviously the builders had moved on long ago. We recorded the structure for posterity and then found an out building with a slab that had a hole cut into it. It looked like some sort of seat. The sky was clear and it was obvious looking at our star and planet map that these old people worshipped Uranus. I bet they were relieved on clear nights to get back into the shelter of the larger dwelling.

The land was becoming unforgiving, bog, ice, snow and the ever strengthening wind seemed to be telling us to return to the sun. Our leader was having none of it, as for the first time the goal looked like it could be achievable. We checked the map again quite a few times to ensure the golden route was kept to.
Some time later the route passed underneath a vast structure that seemingly didn’t exist when our ancient map maker was here. We were not sure what this structure was. We had never seen the like of it before. In front of it was a huge well and therefore many souls must inhabit it to want such a demand. Was it from this planet or was it a structure to escape this planet. We didn’t know, but we all wanted one similar.
So as not to waken the beings inside we found a moat encircling the structure and escaped without capture but with muddy, wet feet.

Gaining an incredible height our leader decided that this called for lunch. It was cold, snowing, windy and the worst spot to take lunch. The ground was sodden in a black morass and many tussocks of golden grass abound. I found a high spot and plonked my derrière onto it. Chocolate brownies that had been saved and packed away for such an expedition came to the fore and were demolished.  Numerous of those 4 legged creatures we had spotted earlier came within smelling distance and they would obviously report back to their masters later that they had encountered 7 strange lunatics.

All around us in such a God forsaken place, so far from home, we could make out the hand of a kind of being that had struggled to make a go of life in these wild enclaves. So different to the land of the Dolphins.

Contouring, and then passing a huge forest of Spruce we came face to face with a strange 2 legged creature that warned the surrounds of impending presences.  We starred back and pronounced it to be similar in construction to our own Guinea fowl. Do you think these would be good to eat or just good for eggs someone said. I could eat anything at the moment i thought, and took a handful of nuts and raisons.

Higher ground beckoned as the golden route climbed forever upwards. Immense peaks in the valley opposite and the hope of wealth to be found at the top spurred us on. A strange column of concrete greeted us where the land no further rose.
We stopped and checked around for signs of burial but none was found. Was it under this concrete structure? Maybe it was covered up by the snows. Maybe we will have to come back again when/if the snows clear.
Other large blocks of stone stood stark against the grey sky. Could these structures all have a meaning, a belonging to the stars maybe. Could the golden route just be a figment of some weird mind. Who knows!
We did know that now the golden route once warm and lush had turned cold. The moon God had started to suck the warmth away and replace it with a gnawing cold. It would soon be dark and foreboding. We needed an escape and some warmth.
Coming across what looked like a welcoming habitat, we stepped with trepidation across the threshold of this new world. "What you would like Alan", Martin said. Filtered or Golden blend?
I was woken up, back in the land of the coffee machine.
Had we really found nothing? Well i was glad to say, i had. "I’ll go the Golden route please Martin”.
Any chocolate brownies left.


Thanks Martin and to the other 5 explorers for a fine day out. 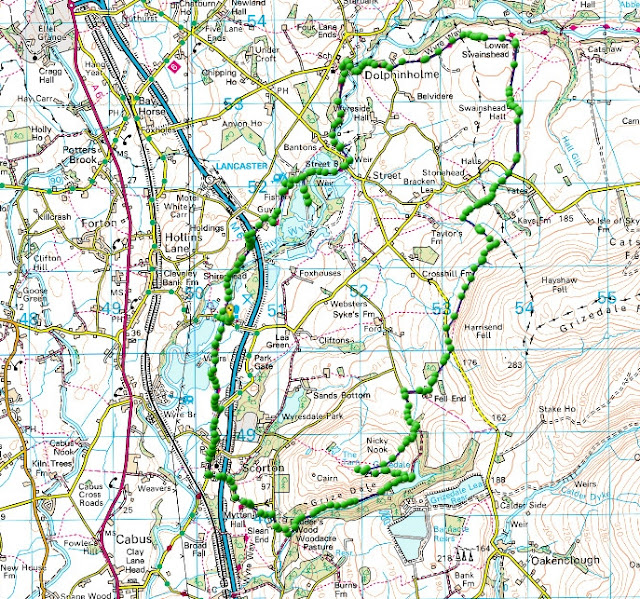 Wonderful stuff - and excellent photographs on the link, they made me shiver just looking at them!

Yes i enjoyed it. Thanks Martin.
I think it turned out a little bit longer than planned. I bet there was some tired legs later.

Come to think of it, I think there's a typo on the map...
Yes, my planned route (per Anquet) says 18.9 km, whereas my Garmin gadget recorded 20.4 km. That just about makes sense given our occasional displacements! But it was still short by LDWA (if not Plodder) standards, so I expect everyone will recover - they can't complain about a lack of cake, anyway.

The Satmap converted it to 20.6k so i think 20.4 is close enough.
I don't think some realised there was another mile or so after the coffee stop. But your right, the plodders are used to it.
The cake was excellent.

What a tale! I enjoyed the pictures, too.

If your walk was on Thursday, at your most southerly point, you were within about three kilometres of me as I walked south down the Lancaster Canal - see my post "A bogof...". I thought I could hear a lot of hooligan noise at one point.

I was onto your fairy tale long before I looked at the map.

Thanks Maria. Every word true. Ha.
The light was quite poor so the photo's came out better than expected. It was quite cold higher up.

It was Wednesday Conrad. I have never walked this area before so it was with this in mind that the story unfolded.
Fairy tale indeed.

Thanks Dawn, your thoughts are appreciated.

Magnificent stuff Alan. When is the 'film of the post' being made?


Hardly magnificent Gibson but i appreciate it coming from you.
Film eh. Now where’s me camera.?

Tractors are much more serious. Although i think i may have helped design some alien ones.
I can tell you some of the requested prototypes we did certainly were.
Especially for the MOD.