Lauder to Dunbar- The Herring Road. Pt1 of 2.

JJ,Judith and I arrived in Lauder mid afternoon Friday 5th April and within 10 minutes met up with The Pieman Mike.
We were told rather commandant like that for health and safety reasons we had to pitch tents 6 metres apart, that’s 6 metres not 5 you hear, or you will all be toast in the event of a fire or something silly like that. We were on Thirlestane Castle caravan park. God forbid.

JJ took the opportunity once the tents were up to have a little snooze. Well it was deserved as he had done the driving for 4 hours. Mike took the opportunity of photographing JJ catching flies.
We left JJ dreaming whilst we made off into Lauder for a look round, try a quick beer and find somewhere for tea. Mike was more concerned about sorting out a good breakfast for the morning but we only came across a bakery that did bacon rolls.

Should we wake JJ and tell him we are off for tea. A dilemma. We better had we thought so walked back and woke him up. It was wasted as far as tea was concerned because JJ was having his own nosh and would meet us later for a beer.

So back to Lauder for some really nice food in the Eagle pub and then we met JJ in the Black Bull where they certainly know how to charge for a beer, even if it was English.

Walking back to the tents it was noticeably colder and although our anti freeze levels were topped up nicely, it was going to be a cold night.

It certainly was a cold night. -7 degrees C. The tent was iced up and frost flakes dropped off the tent inner as i moved to open the door. I hadn’t realised just how cold it was when at around 4.00am i felt a bit chilly. I wasn’t wearing clothes in the sleeping bag and i grabbed my belay jacket for extra warmth.
My sleeping bag was a PHD Minim 500, and i now know that it’s a sound bag down to -5 and if needed would use it down to -10 C with an extra layer.

Once all were up it was obviously going to be a nice day. The sun was blazing at 8.00am but unfortunately it was behind some trees and would probably take another hour to move round enough to thaw out the tents. Being a brilliant excuse, we headed off once again for Lauder where, on entering the village from a different road we came across the Leader leisure centre which did wonderful full breakfasts. More tea, coffee and toast, and then more. It was becoming quite a challenge to actually get going. 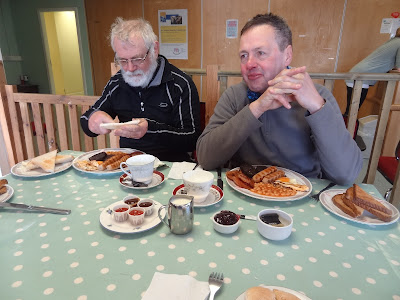 A quick snack before setting off. At the Leader leisure centre.
JJ informed the local constabulary that he was dumping parking his car for a few days in the village.
Then it was tents packed away and off we went. It was 11.45am.

The route of the Herring Road for the first part at least follows what is now the Southern Upland way. So we headed on past the home of the Duke of Launderdale and a nice place he has too. 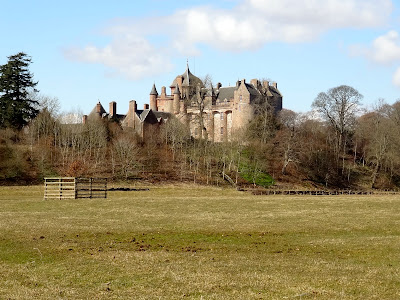 Thirlestane Castle, home of the Duke of Lauderdale.

Thirlestane Castle has its origins in the 13th century. It was rebuilt as the Maitland family home in 1590 and greatly enhanced by the Duke of Lauderdale in the 1670s. In 1840, it was extended and refurbished with the addition of two new wings. The Maitlands are a famous Scottish family who first came to Britain from France with William the Conqueror. As the seat of the Earls and Duke of Lauderdale, the Castle has at times held a central role in the history of Scotland. Now in the care of a Charitable Trust, Thirlestane has been carefully restored to its former splendour.

At first the going was easy but once passed Park Hill the snow depth increased and remained with us for most of the day. Tough walking in parts. 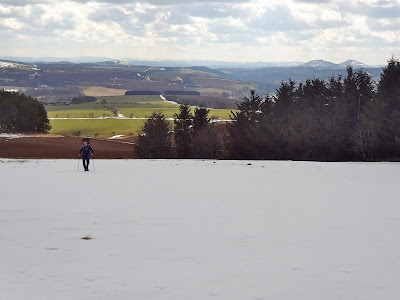 The first snow bank with the Eildon hills on RHS.
Strangely it was the route, the actual track, that had the most deep snow. Ranging between ankle and knee deep. But where there was an obstacle, ie a fence or wall the depth of snow increased and slowed us down.
We varied walking between the snow and the rough heather moorland but both were equally bad in there own way.
Dropping down to Blythe water and a rest from the snow we took the chance to have a brew and a 5 minute break in the sun. 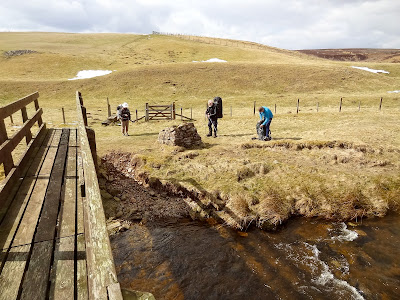 Brew stop next to Blythe Water
Then it was up and back into the snow. When Twin Law 447m came into view it seemed miles away but that was the next target. The path winds it’s way up and it seemed to take us ages to get to the cairns.
In one of the cairns there was a tin box with a log book and a few sweets. A geocache of sorts. Time passed quickly and the temperature which had been hovering between 6 - 9.5 degrees C was now falling rapidly and a stiff breeze was chilling us. We needed to find a campsite soon.

Checking the map, we were going to cross a decent sized stream in about 20 minutes and so we headed off downhill. Looking to the South East there was great views of the Teviot hills and the wide expansive tweed valley. 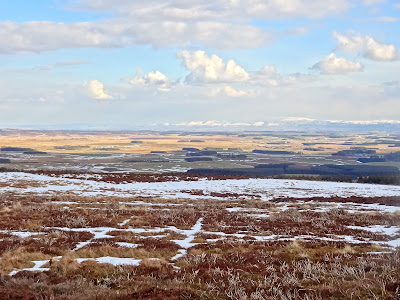 Not on the map was the new windfarm road that now severs the landscape. But it was clear of snow and made for a fast decent to Watch Water where just beyond an archeological site we found some reasonable if a bit bumpy places to pitch. It was 7.00pm. I think we were all quite tired at this time.
A hot drink and food was called for and then bed as darkness fell.

We saw lots of wildlife today. Curlew, Lapwing, Skylark, Meadow pipit, Buzzard and many many Grouse. Also more Hare’s than i have seen anywhere else. 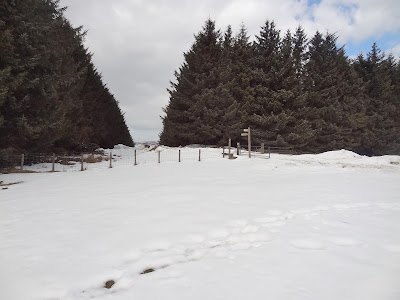 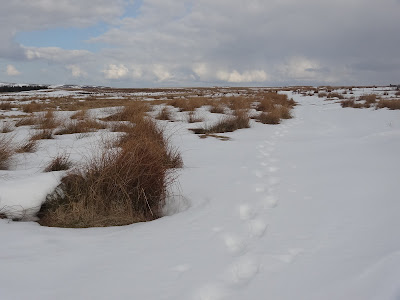 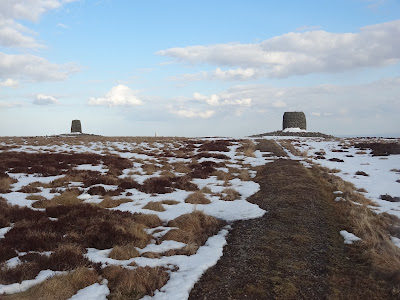 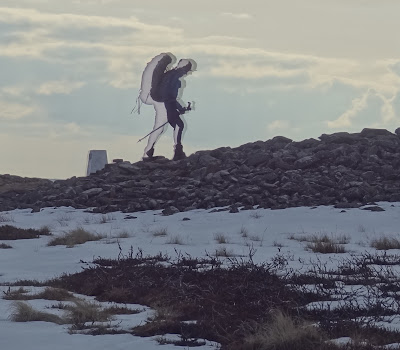 Not sure what JJ ate from the Geocache but he was turning into a time lord!
This photo was as happened. It has not been doctored. Strange. 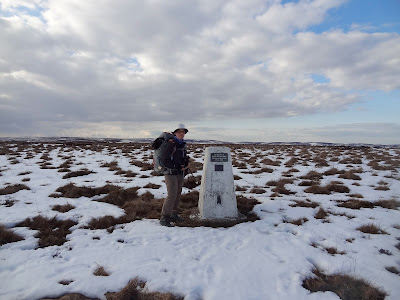 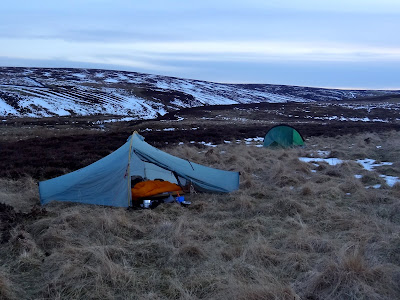 Hi Laura,
Yes it would have been good to have you along. You can get snow on the challenge, so don't forget your snow shoes.

Beautiful landscapes, Alan - although a bit too snowy in places (to my liking, that is)!

I've acquired a GPS thingy so I guess it will be geocaching with the kids as soon as the snow melts away (hah, one way to fool them out!) - but if it makes you look like JJ in the picture I'm not so sure about the idea...

There will be a slideshow after pt 2.
Strange that picture of JJ. Everything is fine except the outline of JJ. I am lost as to what may cause that. It has never happened before. Maybe the centre of the sensor was frozen.

I thought it was the Eagle where we ate? I think the Golden thingy was the only pub we didn't go in!
I did enjoy the brew stops; I don't usually bother when I'm on my own.

Thanks Judith.
I wasn’t sure of the name but you confirm my doubt. Now changed to The Eagle.
Oh yes. Brew stops are a must. They are part of the revivalist movement.

Excellent post Alan with lovely photographs of an area that I've not visited for years. Looking forward to pt2. A trip without brew stops - unthinkable so it is.

Thanks Gibson,
Pt 2 in work.

I'm pleased to see that Mike and I opted for the lightweight breakfast - I'm looking after my figure you know.
Ahem.
:-)
JJ

JJ. That was a challenge you overcame with flying colours. What wasn’t on the photo was the extra toast and mug of tea.
What was surprising was that although the car was parked close to the cafe you resisted trying a second helping on the way back. Well done that man.

Maybe, but I was tempted!

I don't actually think any of you would have thanked me for my company with my track record witg snow and minus degrees! Kind of sorry I missed it, but not a lot!
Well done.

You would have loved it Louise. And there’s no doubt you will see snow on the challenge. Been a pessimist an all.

Ha! I'll certainly see snow, but I'll be skirting round it and passed it. If it snows on me like last year, I will NOT be amused!!

Fantastic Alan, a great pity I missed it. However, I had a wee pootle around Dartmoor.

Hi Dawn,
Thanks.
Yes, it was a shame but at least you got out there and did a good walk.
See you on the summer route A? If it happens!