We are now back home after our short backpacking trip. The first one of this year, which tells it’s own story about how bad our weather has been.
Our 4 nights away started in Lauder and finished in Dunbar. The area is called the Lammermuirs.

This region of Scotland between Lothian and the Scottish Borders is not particularly high but it’s steeped in history.

When Mike put out messages that this was the area he wanted to base his TGO Challenge training route, i admit that i was unsure exactly where it was. I remember reading about the area in the TGO magazine of many moons ago. It wasn’t an area on my radar and without this little sojourn i doubt if i would have planned a route there myself.

Having now completed the trip and a successful one too i may add, it is without doubt a wonderful area, as long as you can blank out the hideous and unbelievable amount of wind turbines which blight this otherwise quite lonely and pretty area.

Mike’s plan, hmm, the original plan, that’s plan A i think, was to do 70km. There was also plan A+ and there’s always a plan B. But we also had plan B+ and - and a plan that if all else failed we could just stay in the pub and cafe and then go home.

Just as i was packing i noticed David Linton’s fine post of a walk he did the Sunday before Easter in our proposed area. The snow was deep, very deep. I thought, 70km in 3 days in those conditions with a full pack and no snow shoes would be a bit too much. I think that we need a revised plan.

I sent out tentative emails, so as not to be strangled for being a wimp, and asked if we should consider an alternative route skirting the deep white stuff and reducing the length of the walk to about 50km. Back came agreement and a plan was hatched, i think it was Plan B, to do a walk called the Herring Road.
It seems, from a newbie’s point of view to this area, that many years ago the fishwives of Dunbar carried huge creels of fish into the interior for sale. And this was the route they took. All very interesting. And so we had a plan but no map apart from Mikes. Then Judith bought some maps but didn’t know the route. I had a GPS and so i knew where we were but not where we were going apart from Dunbar 50km away. And that was that. 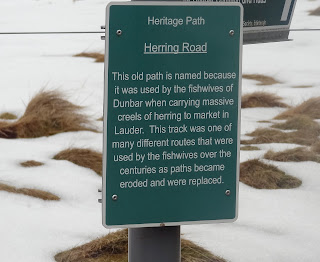 We got there anyway, Dunbar that is. On route it was bitterly cold and at times a fierce biting wind. Temperatures varied from -7 degrees C to +8 degrees C. We had hard frost, snow covered tents, good sunshine, clear views, black threatening clouds, deep snow and very deep snow. Frozen boots and more.

The wildlife was such a pleasure, although very noisy in the early morning. It’s no wonder they want to shoot those grouse. Winter coated hare were in abundance, buzzard, curlew, many geese, lots of fox tracks, barn owl and more.

Some gear worked and some surprisingly didn’t. Our last night in a very posh bothy was a treat unexpected and the trip proved excellent in good company.
Thanks ever so much Mike for the organisation and to JJ and Judith for good company and Becky of course.

..and thanks to Alan for the footprints, without which I'd probably still be somewhere around Whiteadder reservoir.....

Nice windfarms by the way. There are east Angulans who would enjoy bits of this landscape...

Ah yes, this sounds about right for one of these trips ;)

Did you do any handrailing or were they all under snow?

Always good to have alternative plans.

Are the wind turbines very noisy?

hi Tony,
Handrailing is out now on the grounds of health and safety. We just couldn’t carry a big enough first aid kit. Funnily enough quite a few of the hand rails were up to the top rail in snow. Photo’s to come.

Yes Maria, the turbines are very noisy, very overpowering and a blot on the landscape. They actually make navigation quite difficult in bad weather.

I think the noise pollution would be the worst thing to me.

They look like something from war of the worlds.

I don't think they are very noisy but there is a constant noise. What I found most distracting, apart from the sheer size and number of the things, is the shadow that sweeps past every couple of seconds. It made me feel a bit sick.

The noise depends on wind speed. They can get very noisy. I certainly wouldn’t like to live within a mile of one of these brutes.