A couple of the jobs on the house list were done, well almost done. So as a treat for good behaviour i allowed myself a little walkies today.

A few weeks ago when i was plodding with the East Lancs LDWA three of us hung back from the procession and when nobody was looking we did a parachute roll into a side ditch until the guards others disappeared from view. We discussed a little Marylin called Hail Storm Hill 476.64m. that was only a short distance over to our left or east as some would have it.
Descriptions and whereabouts of hills can be found here.

The only trouble was that none of us had a map! So unfortunately we wondered around and took some nice pictures of what we thought was Hail Storm Hill but in fact it was Top O Leach. It was my fault, i take the blame. Martin said that bit of ground over there looks higher, but there you go, my mistake.

So it’s been on my agenda to put it straight and today was the day. I was prepared. No mistakes today. I’d never live it down if i missed a top when the sun was out. “Sun”, did i hear you say!
Well yes, where i was the sun was out but south Manchester looked dull.
I carried equipment only surpassed by GCHQ to ensure the mission was a success. 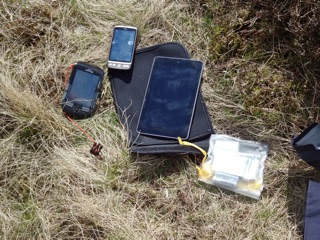 I also wanted to go and have a look around the old Ding Quarry and see if any wild camping sites offered themselves. Obviously water is high on the list for any wild camp so the spring marked on the OS map just to the east of the quarry was something to search out.
The quarry, dormant now, used to provide stone for house building and floor flags in Victorian days.

The walk up Rooley moor road is a bit tedious when you’ve done it a few times, so i wanted to detour onto the moor. I passed a fellow walker, sweat dripping of his nose and chin. It wasn’t surprising as he was walking in wellies and had a quilted waterproof and a rucksack from the seventies. I went over to a low hill called Top of Pike. There was quite a large cairn for such a meaningless hillock. 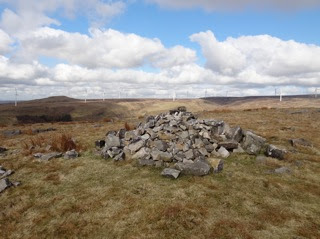 Views were good all round but south Manchester still looked overcast, rainy even. 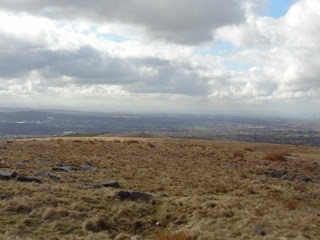 I could see the spoil heaps and the “fingers” as they are called where waste had been discarded from the quarry. Once in the quarry i was quite surprised at how big it is and just how much stone must have been extracted. Very little remains there now, a few left over buckets, derelict storage containers and the walls of buildings long gone. 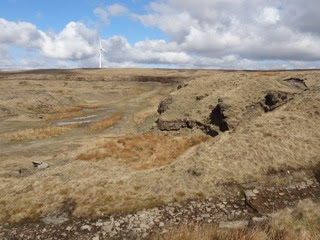 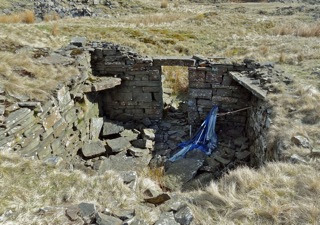 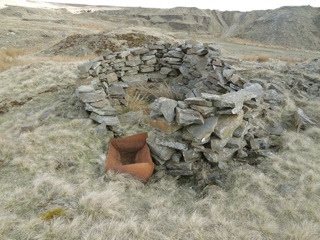 Inside one of the buildings was the remains of an old Dome Tent. A wild camper!
I headed off slowly through the quarry looking at the the rock and the heaps and holes and wondered what it must have been like to work here years ago when the wind was howling and the rain horizontal.
They must have been hardy souls. I was in no rush and enjoyed my wander.

I could hear the call of a Curlew, unmistakeable, and quite close i thought, although i didn’t see one all day. I checked the map and skirted the quarry edge making for the spring. With the area being quite dry it was easy to spot. But it was not inviting and i wouldn’t fill my water bottle from it. It would be hard to spot if the weather had been wet as there is plenty of boggy ground surrounding it. 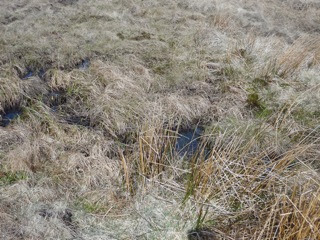 Right next to the spring i headed north on a clear track, with a couple of way marking posts. I passed what looked like an old railway platform. It must have been an important part of the quarry to have built such a structure here. A tramway maybe? Not sure. 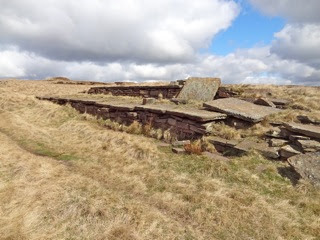 I was soon at the top of the hill, Hail Storm Hill. This was it. Just prior to the top i found a pair of ladders and a tow rope, neither in good condition. I can only assume that a 4 x 4 had got stuck and these pieces of kit extracted the vehicle from the gloop.
Looking at the map the actual pinnacle of Hail Storm Hill, if thats what it can be called, is not obvious. I presume the old building, now a shelter is what people call the top but just to be on the safe side i also went and did the high ground marked 476m and 477m,. 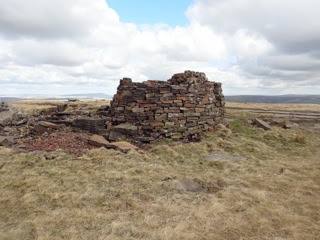 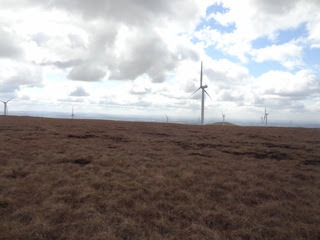 Another bit of a gloopy trod brought me to the new wind farm road which i headed off down to the mast on Higher Hill. I just went there to see the views as i had never been on that edge before. 2 off road motor bikes passed me quite noisily. I was sat down just off the road and i don’t think they even saw me. 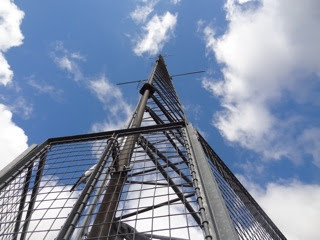 It was a really pleasant day, hardly any wind, certainly no rain and beautiful golden moorland.  Still not much sign of new growth around. Colours reminded me more of Autumn rather than Summer.
As i headed for a wall which crosses the top of Naden Brook i noticed a female Wheatear, it was sunning itself i think, but it stayed long enough for me to get the camera out and take a photo. 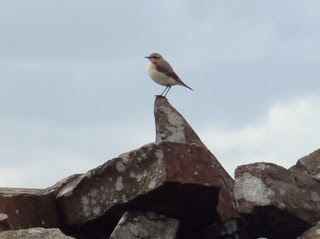 There is no path shown on the OS map for a route along Naden Brook but i have walked up the brook before and i knew i could exit at the bottom and so i decided to walk it again and pick a nice sunny spot for lunch.
Just as i crossed the brook i found my first dead sheep. Probably succumbed to the fierce weather that been up here over the last few weeks. I bet it fell through the snow and couldn’t get out of the bog. 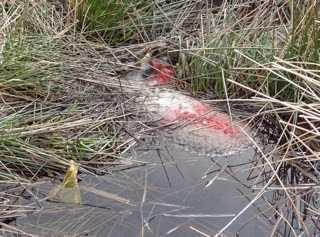 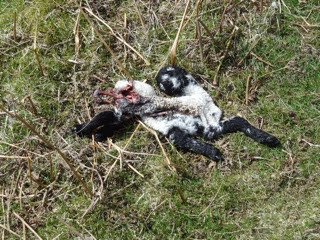 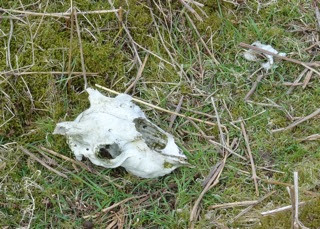 One bath too many 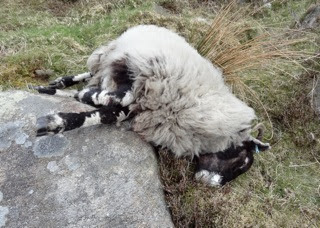 This poor girl was still alive but in a very bad way. I went over to check her expecting her to get up and  move away. Hardly a flicker apart from a shallow bleat and a flicker from the eyes. My thought was lambing but she was in a bad way and not like i had seen a ewe lambing many times before. I wondered if she was breach or struggling with birth so i checked and that wasn’t the case. She was in a strange position to, half down a hillside and upside down. She had been pecked by the crows and Ravens. There was nothing else i could do. She was not for moving.
Sadly i moved on, i would tell a farmer if i saw one later.

Just before i got to the bottom of the brook i picked a good sunny spot and sat down for a coffee. I kept thinking was there anything else i could have done for that poor ewe but there wasn’t, i knew that really.
I enjoyed my stop and the peace and quiet, no sounds, nothing. 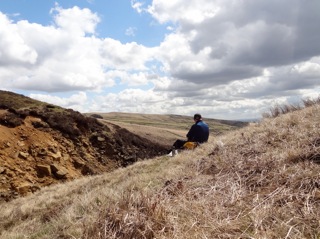 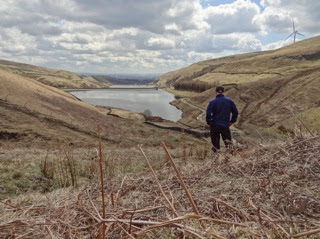 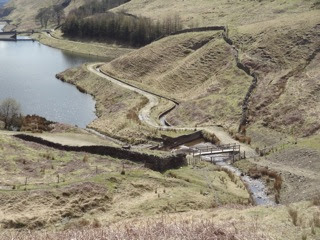 Descent to Naden Higher reservoir.
There are a group of 4 reservoirs here, Naden higher, middle and lower and then Greenbooth. I decided to take the east bank simply because i hadn’t been that way and also my route back to Rooley Moor rd exits east just after the dam of Middle reservoir. Joining the path to the left of the footbridge (Photo above) i was joined by a lamb only a few days old. It followed me along as though i was going to bottle feed it. As i crossed the fence it bleated, trying to get through the wire fence. It didn’t manage it and i moved on. 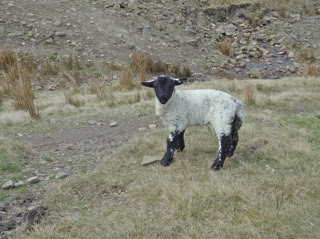 My little follower.
Around the corner the light was lovely and i just had to stop and take in the scenery. I couldn’t believe how warm it was. I was in a sun trap and enjoying every minute. The birds, the reflections on the water, watching the clouds change the light on the fell sides. So peaceful. 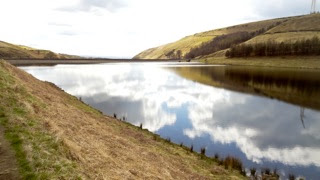 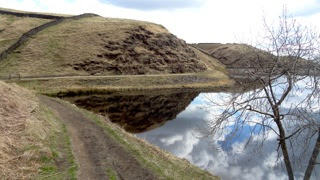 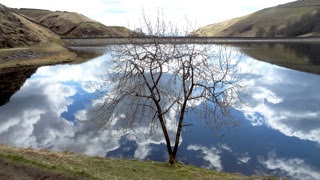 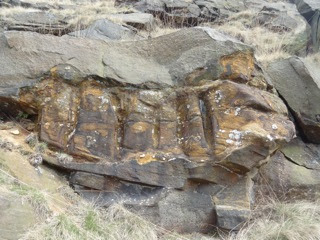 Strange rock formation, or were these drill holes? 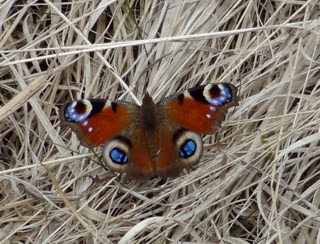 As i watched a couple of Peacock butterflies landed close by and as i went to pick up the camera they were off. Five minutes later one came back and landed on the same spot. This time i was ready. 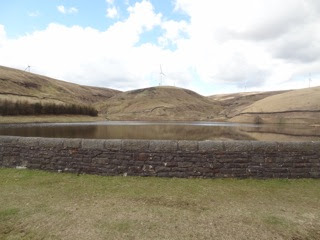 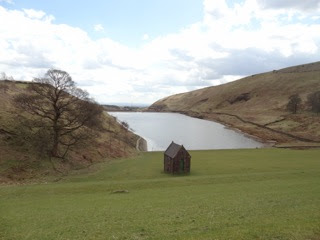 What a fantastic wild camp spot! And plenty of water. 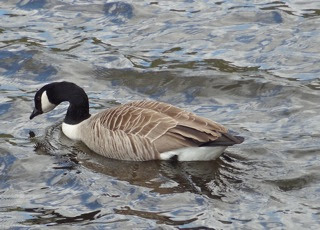 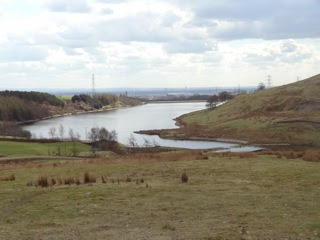 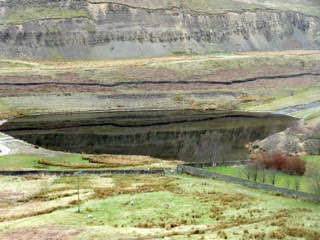 My last photo before getting back to the car. What a spectacular day. Lets hope for more of this weather.

Excellent, Alan. It was lovely here as well - the new tent is now nicely seam-sealed.

So, you are now fully qualified to guide our evening walk on 30 May! (See www.topwalks.com)

I found a sheep a bit like that in the Lakes last June - couldn't do much for it, but I managed to pull a muscle trying to help it to its feet.

Good trip report Alan. Sheep have a had a right battering this spring. Now the spring has arrived the survivors will get back into shape. Heart breaking to see scenes like that however. Nature can be cruel.

Thanks Martin,
I am not sure if i can make it with it being a Thursday. I will have to check Sheila’s diary. Any other day and i would say yes.

Glad the gear sorting is going well. Not that it would take you very long. Did you get the UL7?

You do find sheep in some strange predicaments the more you wonder off the main paths. I have found plenty to rescue.

Hi Mark,
It was one of those special days when i wished i had taken a tent and watched the sunset. It was quite a good one.

It has been very hard for the livestock on the fells. Natural selection and all that.

I decided the UL7 was too heavy, so I got a full length Neoair XLite.
Shame about Thursdays....

I can understand your choice because the UL 7 is better for frosty, snowy ground and i presume you have bought the x lite (Thats Karrimor’s name too) because of your pending trip abroad.
The UL7 is quality though. The material and the valves Exped use are just so much better. I would take some convincing to go ThemaRest again. It will get a good testing on the Challenge though Martin and i’m sure any faults will be found or not as the case may be. Fingers crossed.

Thursday’s, we tend to go out for a meal and a couple of beers. Sheila doesn’t finish until late on Thursday in particular, hence the reason we eat in town. If she can get a day off we would like to come thats for sure. Any other day and it would be certain that i would have made it, if not Sheila.

How many Marilyns is that? Are you counting?

Hi Conrad. I’m afraid i don’t bag tops. I never got into it you see. I did all the Wainwright tops years ago before i even realised that such a thing was an agenda. I just bought Wainwrights books and just ticked off the names when i passed. I got Pouchers Scottish Peaks but i never managed to get to Scotland often enough to Bag them in any great numbers. I enjoyed long backpacks abroad rather than “I must get to that top” because its on a list.
I think for anyone just starting out, doing Marilyns, Corbetts, Munros etc as a means of getting around the country, visiting areas that generally would never be visited is a good thing.

Poor sheep. But death is an inevitable part of life after all. Sometimes you just wish you could do something - anything - when you see someone suffering.

But otherwise a lovely walk!

With our bad winter there are lots of dead about and that includes ponies too. Water will definitely be filtered in the hills.