We chose a lie in today but it didn't happen. A warm tent, sun shining and making it feel like a sauna soon had us awake and once awake you have to go to the loo, don't you.
So we were up at 7.30 and eager for breakfast. For some reason Sheila said she was starving. I don't know how after everything she ate last night.

The days are becoming quite cyclic if thats the term, where the weather can be forecast almost to the minute. The sun shines for about 15 minutes then a breeze arrives and 5 minutes later dark clouds and a spot of rain or a light shower. Then it repeats itself. Generally speaking not a bad day.

Our route today was to head for Old Blair, through the castle grounds and then pick up the footpath along the west bank of the Banvie Burn. Reaching Old Blair we came across a Dutch Couple who were a bit lost and were looking for Glen Tilt. We pointed them in the right direction and then Sheila posed at Minigaig road. 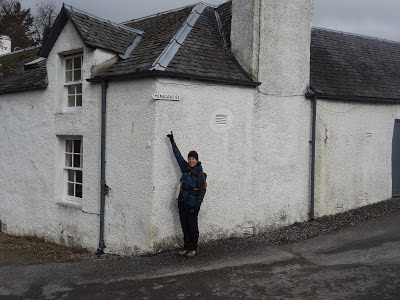 The path up beside the Banvie is very picturesque through mixed woodland. Good views behind of Carn Laith and Morvick appear as height is gained.
Looking north across grouse moorland cairns can be seen on the escarpment.
I found a small deer antler in the grass which was a surprise as it was so close to the path. 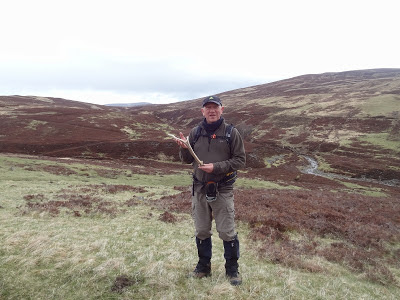 We made a couple of detours on route. One to the Banavie Pillar where the last man was hung in this area and also to Whim lookout where there is a great view down the glen.
I will post some more photo's when we get back home.

Yesterday we went down Glen Tilt which is supposed to be one of the most lovely glens. Well in our opinion the Banvie is far better. I am so pleased we decided on this route.

As the watershed is reach there are expansive views across to the Cairngorms and there is still small coverings of snow around. We saw a small herd of deer along the skyline of Meall Dubh.

The path splits at the end of the forestry. We turned south and headed down towards the Falls of Bruer. It was here that we had one of only two showers of rain today. Neither long. We met two walkers heading up and these were the only two walkers seen today.

The falls of Bruar are spectacular and well worth a visit if you are ever in this area. 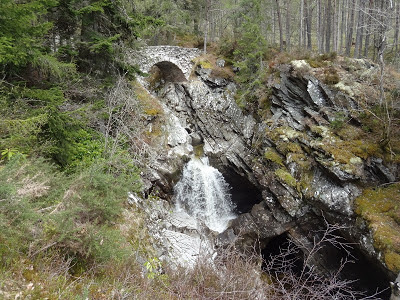 There are numerous vantage points to take loads of photo's of the falls and the bridges and i wish i could load just a few more for you to see the beauty.
We spent about 3/4 hr here in admiration and then headed down to the House of Bruar. Where we looked, held onto our wallets and headed off smartish.

So here we are now back at base, chips eaten and delicious too, a couple of beers bought for later. Looking forward to tomorrow and a lazy day around the castle and village. Well we can't go home without using our free pass now can we.
Posted by AlanR at 4:35 PM

Enjoying your articles on Blair Atholl, Alan. Never stayed there but we used to camp down at Pitlochry and took the children up Carn Liath once.I think we looked around the castle.
Always fancied backpacking the Tilt.

Hi Greg, Thanks for the comment, Blair is very quite during the week but busy like Pitlochry at the weekends. All the glens in this area of Atholl are worth backpacking. Some great short or long trips as easily accessible.

Just checking in to let you know I am following.

Are you taking pics with a normal camera as well as your mobile? I do that so I can post some pics on the blog, but I find it really tedious. I usually know there are pics lurking in the camera that I would want to post.

Thanks Conrad. Very kind.
These photo's were only taken with a Sony camera. (Not phone) The trouble is the internet is so slow that importing them takes that long the battery on the laptop quickly reduces. (Its not in tip top condition). I also have to reduce the image size so that at least i have a chance of loading an image around 100kb.