Rivington to Brinscall circuit with the East Lancs LDWA

This walk was called “Not a full shilling” by the LDWA.

Due to an email from JJ, and the fact that Sheila wasn't working, we decided to attend a walk with the LDWA. (Long Distance Walking Association).
Now our previous experiences of walking with this group have resulted in us both walking too fast and we end up being put off attending further outings.
It's not the fault of the LDWA group who do some amazing walking feats, like 100 miles in 48 hours. If that's the way they want to walk then that’s good for them but we like to look at the views, take photographs and not just get from A to B in the fastest time as possible.

So why did we go you may well ask? Well this was supposed to be a short walk of 14 miles and an introductory walk for any new people. So the pace should have been a little restrained and not overly long in distance.
We all met up on the approach lane to Rivington barn and with it being a Bank Holiday Monday there was a good turnout. 30 walkers.

Norman was leading the walk and this area is his back yard. 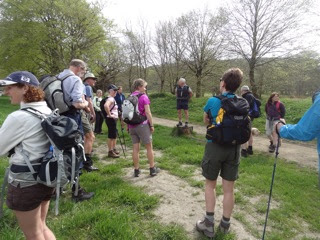 After a gathering and an opening speech we set off on a steady ascent up to the tower at 373m. We were all guessing as to what the next vantage point would be, the masts or Twin Lads may be.
So it was a surprise when we turned and headed straight back down hill, giving up all that height and wonderful scenery, and on a beautiful clear day. 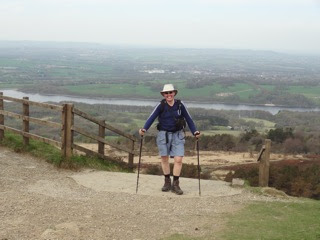 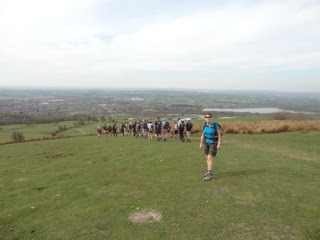 We descended to the castle on the shores of Lower Rivington Reservoir. We had our first short break here.
It was a good chance to have a chat with John Hancock, a TGO challenger, lightweight gear enthusiast and fellow blogger.
John was sporting his full TGO Challenge kit and his Z Packs Cuben fibre rucksack was of great interest. He was also wearing a Rab wind jacket which somehow he maintained wearing throughout the days heat.
Good to meet you John. 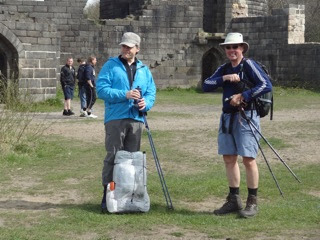 We were in amongst the day trippers and the dog walkers and were soon away north, following the east sides of the reservoirs. We took the path between the Upper Rivington reservoir and the Yarrow.
The reservoirs were low as were the feeder streams and ladders. It just shows how little rain has fallen over the last months considering what a cold and snowy winter we had.

The walking pace was picking up as we passed the lovely Anglezarke Reservoir and it wasn't long before Sheila mentioned it. The line of people was getting more and more spread out. The trouble with this is that it becomes very easy to loose the group. When you have no idea where you are going it doesn't actually matter that you know exactly where you are. A back marker should always be there but today for some reason the appointee was not always in place. In some situations where the route took a sharp turn it was more luck than anything else that we managed to stay on course. I just add here, that we were not alone in this plight.

We came to a lovely little spot called White Coppice. A small hamlet with a well kept cricket pitch a small refreshment area and a loo. This was lunch stop and a finer place to stop could not have been found. Although the time allowed for lunch would have been adequate in most circumstances, today with it being bank holiday and with lots of people around, if you actually queued to use the loo it more or less meant you missed lunch. No consideration of this fact was taken on board. 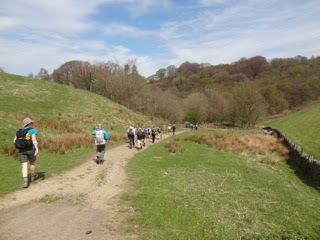 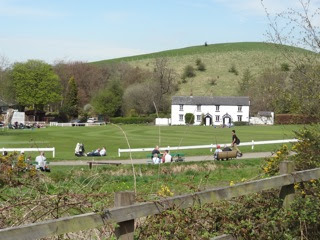 Another speech from Norman about taking some direction or other was completely missed by us as we were still packing our lunch away. It may have been a vote, i’m not sure, but we headed east and upwards along Dean Black Brook and then north through Wheelton Wood, a mixed woodland to Brinscall. 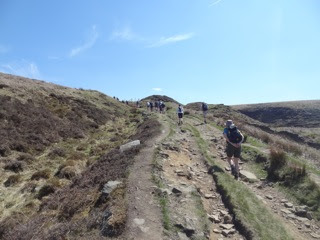 The pace had again increased and although we were not at the back this time, the group 50 yds in front changed direction and headed off along a green lane with numerous exit points. We thought we would be middle markers, therefore keeping an eye on the front group whilst waiting for the rear guard to catch up. Unfortunately the tail enders of the front group disappeared before the real tail enders appeared.
Onwards we sped to try and locate the whereabouts of the main party but with so many off shoots possible, we couldn’t find them. We didn’t know where we were suppose to be going and although we had a map and a GPS, it wasn’t a lot of use use knowing where we were although better than not knowing at all.

There were 8 of us in this splinter group, and taking a look at the map decided to stay on the green lane and head down towards an old disused railway line. At this point we thought somebody would realise that 8 members were adrift and wait for them, but there was nobody about. We asked a walker coming in the opposite direction if she had passed a large group of walkers, but no she hadn’t.
A dig in the rucksack of one chap for his phone, and a call to somebody, resulted in us locating the group sat at the far end of the lake at Brinscall, enjoying the sunshine.
As we arrived, we never got the chance of a coffee, just a brief exchange of pleasantries before we were off again back in the direction our small group had just walked.
At this point it seemed that a decision had been taken to start the return leg but i think this was not the original schedule. 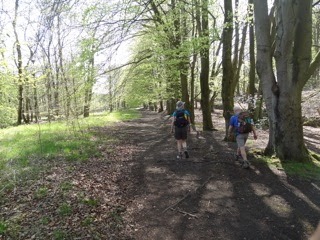 We followed the old railway line south before diverting to Tootals farm and some pleasant country lanes brought us to a ford just west of White Coppice. A very brief pause ensued whilst we admired the picturesque cottages and watched a few cool down their boots in the ford.
Another quick burst of pace took us past a reservoir and across Higher House Lane before the rise of Healey Nab was reached. 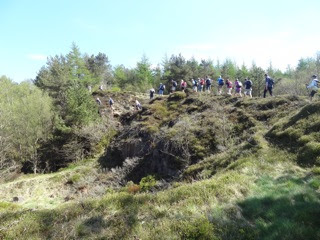 At the top Norm pronounced that this would be the last brew stop and so it was that we picked out a nice grassy bit, plonked ourselves down and started to get the flask out. Before i even got the first cup poured the group were up and away again. So a quick gulp of coffee, flask packed away and a few curses as to what the hell was the point of that.

A Mountain Rescue Helicopter and Landrover were searching for what we believe was an injured mountain biker. This briefly gave us a chance to catch up.
Descending down to Anglezarke again, the group must have smelt the finishing line because they were off like a pack of hounds. Nowhere to be seen. 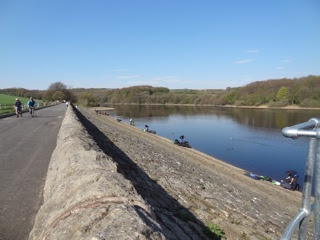 Thankfully i knew this path and the way back to the car park at Rivington. When we got back to the car we had done 27.9km and 734metres of ascent. Max walking speed 7.8kph with an average speed of 5.3kph.
JJ, John and Viv reached their car and we reflected on the days pace and a few other things i won’t mention here. I don’t know how many first timers were on the walk we hardly had chance to talk to the majority,  but i did get a few photographs of peoples backs.

Bearing in mind that this was promoted as an introductory walk, it was too far (the distance should have at least been accurate), MUCH too fast, and it needed appropriate breaks - at the very least to allow ALL walkers to sit down and have a drink and a butty if needed.

Shooting-off before everyone iss ready to go, or just as the tail-enders arrive at the break spot just isn't on. Nor is walking on, leaving the tail-enders behind when they haven't a clue where they're supposed to be going.

If that was my first taste of an LDWA walk, and an introductory one at that, it would have been my last.

Alan. You have done a fantastic write up and i couldn't of put it any better. I enjoy our walks but this day out had a lot of pleasure taken out of it.

John,
You portray my exact thoughts.

A few years back I did a couple of walks with a group whose sole objective was just to walk - cover distance, get it done, quicker than before if at all possible. Food breaks were snatched and rushed, views and wildlife irrelevant. Personally, I just didn't get it.

I've covered decent distances in a day, but time taken (within the bounds of safety) has never been an issue. For me, sitting and watching is as much part of the pleasure as covering the ground.

I'm not saying the 'get out there, get it done' approach is wrong; it's about personal preferences. I just don't think it's for everybody.

Had similar experiences to that, Alan. I'd be wondering if the leaders were trained with a recognised qualification and whether the organisation had insurance.

We feel the same. It should have been an introductory walk for first timers, which we are not, but I just think they have a regular pace and find it hard to moderate it. Habit if you like.
Even worse was that we had made the point about tail enders earlier when we got split up,but nobody checked at the end to see if anyone was missing as far as I am aware.

Hi OM.
As it is a national association I would guess that there will be insurance but I didn't get any info about insurance when I joined. Leading a group I think, is done on a voluntary basis and therefore I would again guess that very few have will be qualified. There again I could be completely wrong. I just don't know for sure.

I wouldn't bother going with that lot again. One of the first things you learn about hill walking is not to split up a group - they are not fit to be out. I would much rather walk on my own, but that is personal preference. It reminds me of a quote I have on my blog home page:

"...the man who goes alone can start today, but he who travels with another must wait till that other is ready, and it may be a long time before they get off." Henry David Thoreau

Hi Conrad,
All my years of walking has been predominantly solo but my longer distance walking has been done with one other or a very small team that were compatible.
When we met you in Silverdale on the Plodders walk, the plodders are a sub section of the LDWA. There was a good crack with all who attended and not a hint of anything to bring into question.
I knew what I was letting ourselves in for with the elite LDWA and it wasn't without concern that we decided to go. Unfortunately my concern showed itself again. Lesson well and truly learnt.

Oh dear. What a race! And the group leader obviously has some difficulty converting miles into kilometres; if it was advertised as a 14 mile walk, you walked over 5 kilometres too far! And with that average speed it sound more like sports than an enjoyable walk. Well, that is my opinion.

Anyway, well done, and it was lucky no-one got injured or lost. The risk for both increases - like you know - if you don't have long enough breaks to recover and get something to eat and drink...