We sold a tent to a friend in Broughton in Furness and i also had a Platypus bottle and tube that i had sterilised for another friend in Seathwaite and both needed delivering. It was only right to make a weekend of it and so on Thursday night we headed off.

The tent was going to Jane at the Square Cafe in Broughton and she had kindly offered to make us an evening meal and we take the wine. We had a good night chatting, the food was excellent and the wine went down well and midnight came all to soon. Thanks Jane for the meal and the company.

So after a good nights sleep and a hearty breakfast we headed off to Seathwaite. Turner hall campsite to be precise. It was a stunning day. Summer had arrived. Jackdaws were noisily going about there business and the Buzzards were being buzzed by all the other birds, and especially the Peregrine. 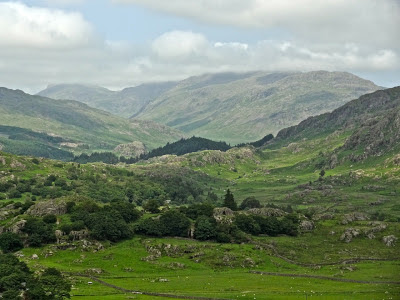 The Duddon Valley
We got the tent up and chilled out in the sun for an hour or so until hunger had us raiding the supplies.
After lunch i had always wanted to climb one of the local Ghyll’s. I cannot post the name of it because it provides drinking water for quite a few residents and they wouldn’t be too pleased if hoards of Ghyll scramblers started using it for recreation.

By the time we had ascended to the ghyll we had quite a sweat on and was glad of the cool water in the shade of a Rowan tree. The views down the Duddon were quite resplendent on such a stunning day.

The Ghyll was a real surprise with a number of waterfalls and lots of copper ore in amongst the hematite and quartz. 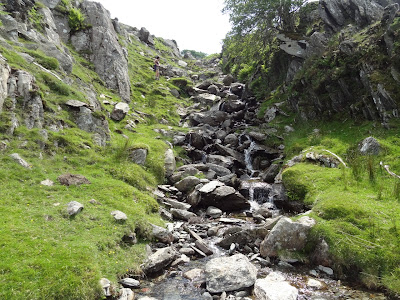 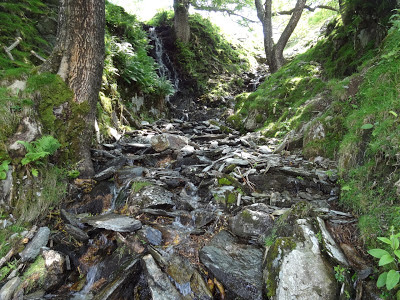 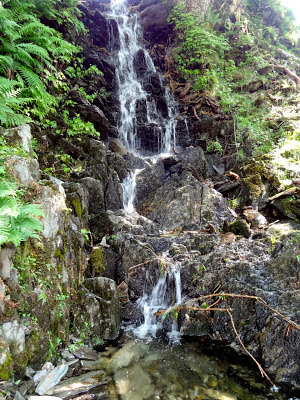 Reaching the top of the ghyll the water disappears underground so we sat there for about 20 minutes just enjoying the scenery. On the way back we managed a quick beer in the Newfield before heading back to the tent.

Recently i purchased a tent from Dawn and un-beknown to me she sent me a couple or 3 stoves to have a play around with as well as the tent. I brought 2 of them with me to give them a try.
One is a Bushbuddy wood gas burner and the other is a Trangia triangle. 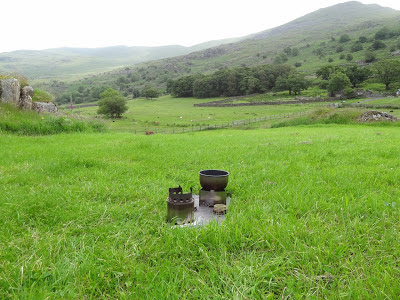 The Bushbuddy and Trangia triangle stoves. White Pike behind.
Post weekend i can now say, The Bushbuddy doesn’t do it for me and that goes for all small wood burning stoves. I just don’t think they are efficient enough for our UK weather and need constant attention and charging. I wouldn’t take it backpacking but it would make an ideal smoke provider to get rid of the midges.

On the other hand the Trangia triangle is a super little stove and it worked very well. I think a secondary windshield will be needed for bad weather but all in all i would backpack with this.
The windshield that is available on the Clickstand stove would be ideal but a little mod to the triangle would be needed.

Saturday dawned exceptionally hot and by 6.30am the tent was sweltering. Even though i wasn’t in a sleeping bag the temperature ensured we got up and out quite early. I wanted to do Hard knott today and picked a route that i thought would provide us with some great views, especially over the Scafell range.

I parked up just adjacent to Cockley Beck bridge and set off along the route of the old Roman Rd heading for Black Hall Farm. BHF was once a Youth Hostel many moons ago but now it’s just a hill farm. The tops of the surrounding fells were all covered in a veil of white cloud but sun lotion was a must. 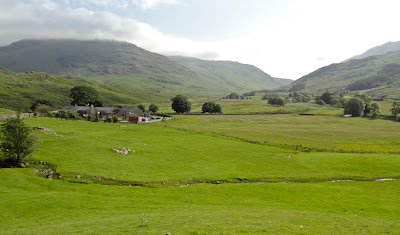 Black Hall farm and Wrynose Pass
The dogs barked at the farm as we approached but the path diverts away from the buildings and we never saw the noisy Collies. Underfoot was lush grass and we thought just how green is it here. We were headed for Castle How, an impressive upthrust of rock. 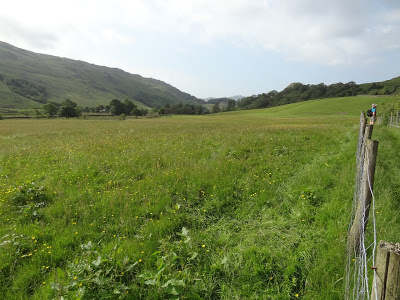 Approach to Castle How, just beyond Sheila and to the left.
Our track bears right just before the How and skirts the North side of the forestry heading up to the shoulder of Harter Fell. The trees here had been recently felled and so the mess left was not pretty and the path up was very boggy in parts.
We were supposed to have been on the old Roman Road over Hard knott pass which led to the Fort on the other side. There is no sign of it as far as we could see.

Achieving the watershed the views were good to Harter Fell, down into Eskdale and in the opposite direction through Wrynose. The Fort built between AD120 and AD138 could be seen but our goal was hidden by imposing Border End. 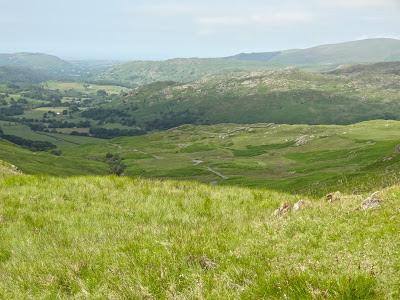 Eskdale and remains of Hardknot Fort 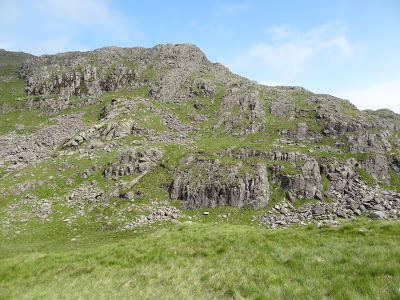 Following the boundary line on the map which isn’t to distinctive on the ground we made our way around Border End through numerous boggy bits before finding the cairned summit. There are lots of similar “Tops” in the vicinity and i would say the actual top would be awkward to locate in poor weather. 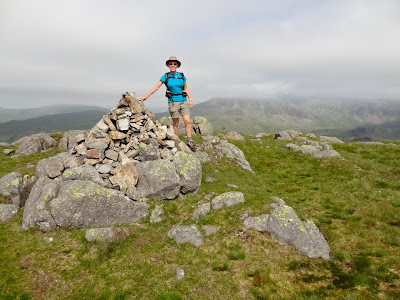 Sheila top of Hard Knott
The top is a great place to sit and admire the spectacular views. We had picked a lucky summit today as we were cloud free whereas all around us the summits were still covered in mist. With little breeze we stayed quite a while admiring what today looked really alpine before heading north to Lingcove Beck. Here we stopped for lunch and in the distance we could see our first walkers of the day. 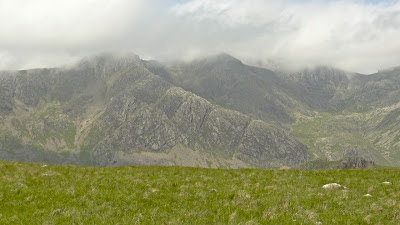 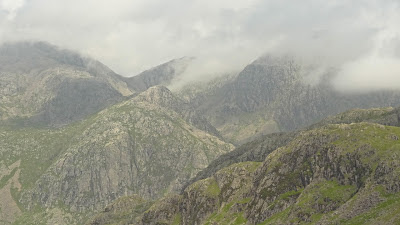 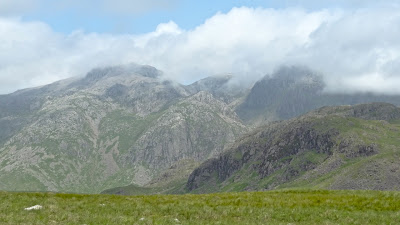 Stunning views of the Scafell range in mist
The walk back down Mosedale was decidedly boggy as i knew it would be but it’s an interesting glacial valley and we didn’t mind the boggy bits. I kept looking back half expecting the Scafells and the Crinkles to be clear but it wasn’t until we got back to the car did a peak become free of cloud. 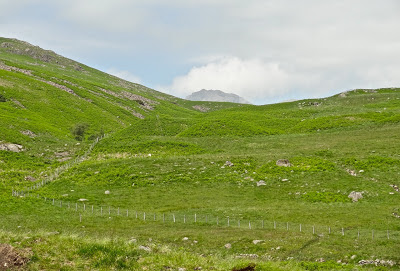 Scafell peaking out of the mist 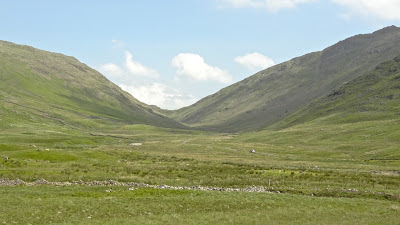 The day had been glorious. One of those days that you don’t want to end.

One of the bests places to walk I know Alan. Fine views, and I find it lacks the crowds other places in the Lakes have.

That is a lovely area. Looks like you had glorious weather too. Fantastic photos.

Its what I call my second home or should it be my first? Its debatable. Views spectacular and excellent walking. Its getting a little busier and the glampers have found it so there is a change in atmosphere and noise levels. The money is certainly welcome though after last years washout.

Thanks Dawn. It was a bit warm for decent photography but I am pleased with the results.

What a nice outing, Alan. I've been using the Trangia Triangle for a couple of years (alternating with some other stoves) and I kind of like it. I've tried it both with the traditional alcohol stove as well as with the gas stove intended for Trangia stoves and it works both ways (although I prefer the alcohol stove set-up).

Hi Maria. I don't think there would be any benefit buying a Click stand over the Triangle apart from the wind shield. They are roughly the same item. I think a home made foil shield would suffice just as good and that is what I will do for the next outing I use it. I like the stove even better than the Pocket stove from Backpacking light. Its more stable and easier to put together.
Oh yes, the Duddon Valley is a lovely area.

Clicking to enlarge makes a HUGE difference to the pics. They are superb. I often wonder if visitors to one's blog bother to look at the enlarged pics.

The Duddon valley is my favourite part of the Lakes. I have happy memories of climbing on Wallowbarrow, a friendly crag, and picnicking with the kids at Ulpha Bridge.

Hi Conrad.
Yes I always click on the Huge image and view slideshows. Its far better and enhances the post.
The Duddon is beautiful but lets not tell everyone. Wallowbarrow was my daughters first climb. Thats rope climbing not walking around the side to the top. Its a place we love to go and walk and meet the locals.

Great walk in a lovely area. I like it for the abundance of small peaks that make for a fine day out when cloud is on the higher summits.

Hi Martin
Its a lovely valley that I never get fed up of walking in.