The day was warm, sunny, no breeze and outside the crowds had yet to form on Chester’s Eastgate. Breakfast over Sheila had a plan. It’s going to be a walking day. Well most of it anyway.
First off the Town Hall Square then the Cathedral then the Roman City Walls which should bring lunch in the Roman Amphitheatre. After Lunch we head for the river and get the 2.30pm boat for a 2hr trip along the River Dee. Which will bring us back in time to get dolled up to go to Simon Radleys Restaurant.  Mmm, you didn’t mention stopping off for a beer somewhere i said. We can do that anytime was the reply.

So the Town Hall Square at 10.30am had a few people milling about but the touristas had not yet arrived in bulk. Quite a few Red coated pike men were about and some dressed up like Guy Fawkes. At this point we had no idea what was going on and then they formed ranks and marched off behind the Cathedral with an entourage of people snapping away with cameras. It was like a scene from the Pied Piper of Hamelin. 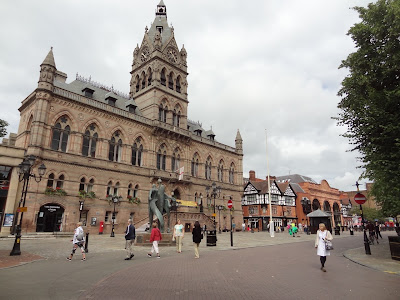 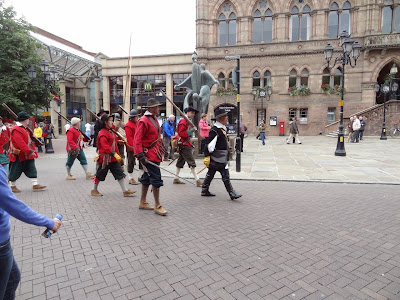 The Red Coated Pike Men. (and women)
We watched them disappear and carried on looking about the square. A beautiful building stood to the right of the town hall and i was surprised to find it was the ornate frontage of the Westminster Coach and car co. It hadn’t clicked at the time but i should have known with this being the playground of the Duke of Westminster. 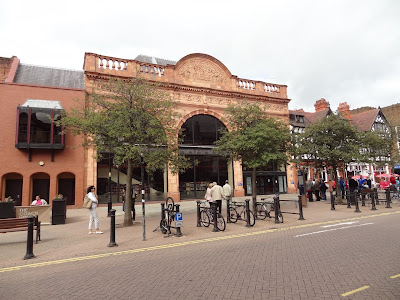 The frontage of the Westminster Coach and Car co. 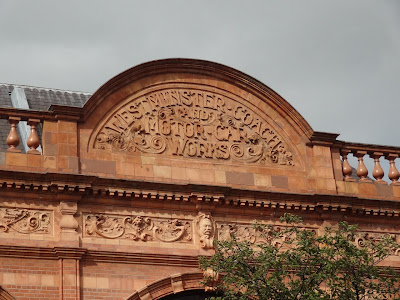 We made our way the few hundred yards to the Cathedral. There are lots of leaflets in Chester letting you know that entrance to the Cathedral is FREE. They seem quite proud of the fact that it is FREE.
So when you go in, why are you channeled into a small area with a desk and a till and young ladies who tell you that it is FREE to enter but we WOULD like you to make a donation of £3 a head. You had to be pretty hard faced not to cough up and to be honest it is worth every penny, BUT its a cynical and belittling way of getting money from visitors. Typical of the workings of the Church. It left a nasty taste. 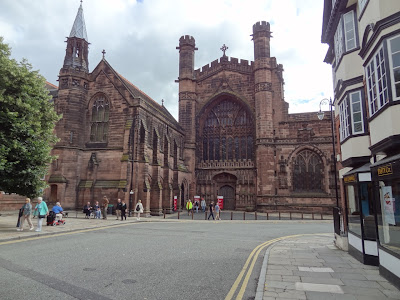 Chester Cathedral
Inside the whole place is spectacular. A camera, especially my compact camera cannot do the place justice. There is so much to see from the gardens and sculptures, the fretwork and stained glass, the grave stones and tiled floors and much much more.
I have put together my photo’s on the Cathedral Interior here for those interested. Click Here.
My opinion is that this Cathedral is better internally than York but externally York leaves it standing. We could have spent twice as long as we did inside. (About 1 hr) but we wanted to get onto the Roman Walls. Time waits for no man and this was our only full day.

Walking behind the Cathedral brings you within a minute or to to the walls. Amazingly the walls, built from Sandstone in about 100AD. They took about 100 years to construct and they replaced a previous mound and wooden palisade construction. Many changes have taken place and it wasn’t until after the Norman Conquest was the complete circle finished. Around the middle of the 12th century. The walls protected the old medieval city and are 3.2km long. 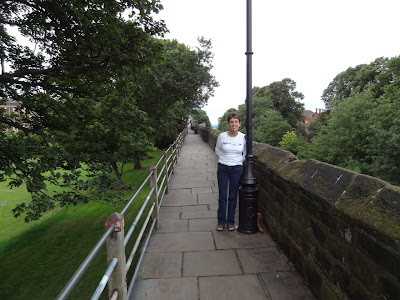 Sheila holding up a Roman Lampost. Next to the Roman Galvanised tube fencing. 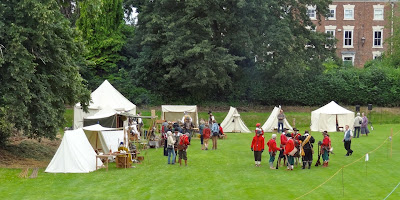 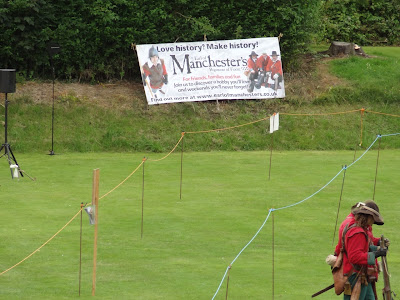 Well as we got a little further it became obvious what the Red Coats were up to. It seems that we were not alone from Manchester as the Earl of Manchester’s Regiment of Foote had penetrated the City Walls and had captured the land adjacent to the Cathedral. I bet they captured a few Ale houses too.
It must have been a very civilised battle as the next skirmish had a time of 12.30pm. I suppose that was to find out who was paying for the next round of drinks. Ah well.
The walls were walked and very wallish they were too! There’s lots to see from the walls especially the race course, the canal, the Roman baths, the river, plenty of pubs and an old grey Fergy. 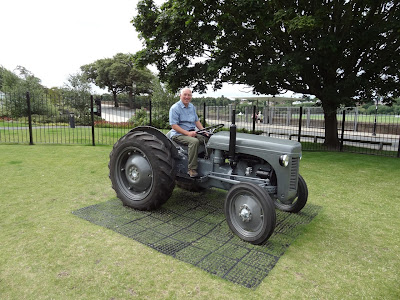 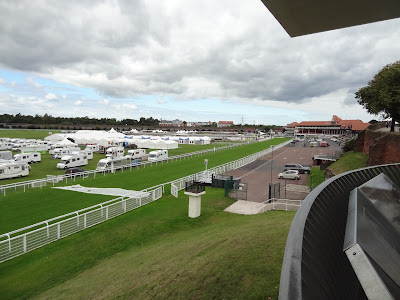 Chester Race Course seen from the wall.
Having done the complete circuit we bought lunch and made our way to the Roman Amphitheatre to find a seat in the sun. And it was hot. We had only been there a few minutes when 3 of the numpty class made themselves nuisances and were quickly interviewed by the local bobby’s. Peace restored.
Behind the amphitheatre is the oldest church in Chester, St John’s the Baptist, which is being renovated and also there is a section of the original structure which is in ruin. Well worth a visit.
There is an oak coffin walled into the arch way and inside it it says Duft to Duft (Old English for the obvious Dust to Dust). 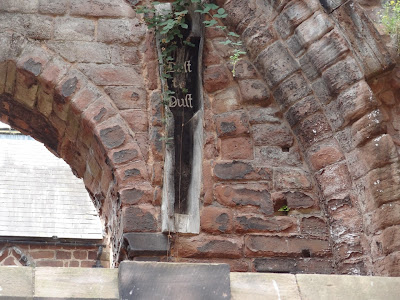 Again, we spent half an hour here and its all very interesting. The river trip was 2.30pm so we hurried off to the river. Passing a very busy and large John Willy Lee’s pub called the Boathouse, we gave it a wide berth.
Finding the jetty for the cruises, Sheila popped over to have a word with the Pressganger’s while i had a sit down in the sun. She came back really disappointed. The 2.30pm boat had been rented out entirely to one party. There was no other boat going on the 2hr trip. How inconsiderate.
We found consolation in an ice cream apiece and passed the time with a walk up and down the river looking at all the very expensive properties which align the banks, then listened to a jazz band for a while. 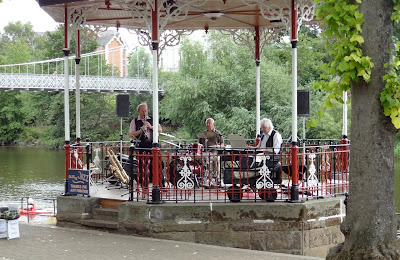 It was all very pleasant and they had quite an audience by the time we headed off back into the city for a walk round the shops. We passed a pub called the Albion and the sign board made us laugh. We would have to find time to call in here later we said. It will just have to be done. 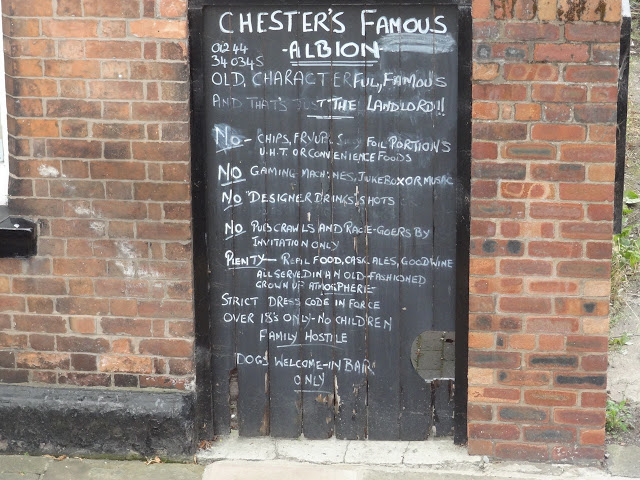 Brilliant rules of the house. A visit is a must.
Back at the Hotel our meal at Simon Radley’s restaurant (2 star Michelin) was so, so good and the service was First Class. As was the wine, albeit a bit overpriced to say the least. But it was a special occasion, wasn’t it Sheila! 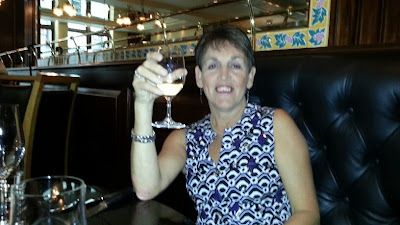 Then back to the Albion for some proper vino plonko. It didn’t disappoint. Just like stepping back in time to the 1940’s. Friendly place and some real character.
Here are a few pics of the inside. 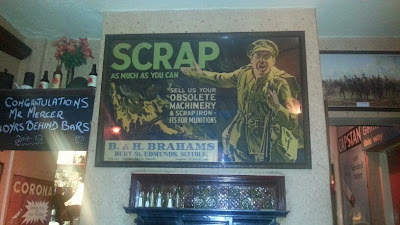 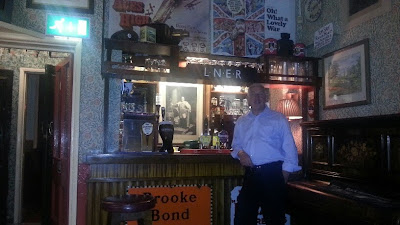 The bar at the Albion 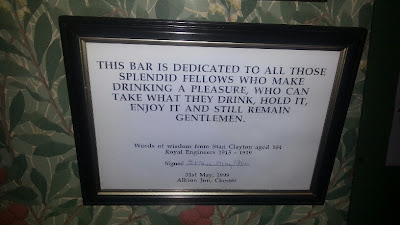 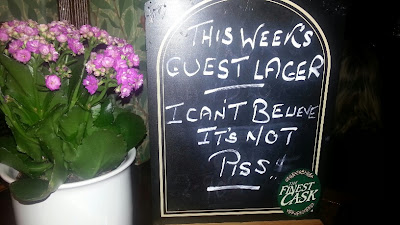 All too soon we had to say farewell.
The twins from last night would be waiting no doubt and so we dashed to the Boot Inn and yes they were waiting. Unfortunately this pub still lives by the opening and closing times from years ago. 11.00pm weekdays and 10.30pm Sundays. I havn’t come across these hours for so long it seemed very strange. But we still had 3/4 hr of chat about United amongst other subjects.  Denis Law met the twins and they showed us the signed photo. Such nice people. 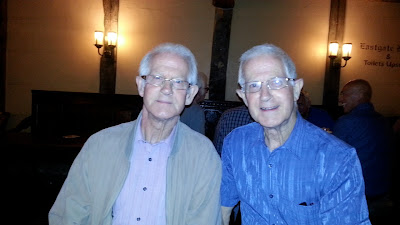 Wonderful Alan. Love the grey Fergy, it was the first vehicle I ever drove, a great wee workhorse.

Thanks Dawn, It has to be one of the nicest cities to visit and of course the old grey was the icing on the cake.

That was a fascinating trip. The sort of thing you don't do when backpacking. People say to you, "did you look round Chester?", not understanding that after walking 15 miles with a heavy pack, finding somewhere to stay and eat, doing the blog and keeping any further walking to a minimum, you just do not have time to do these things. I went to Chester a few years ago on a caravan holiday with my daughter and thought we had a good look round, but we didn't see half the stuff yo have - must have a return visit sometime. That restaurant sounds inviting. I don't think there are many 2 star Michelins in the Uk.

Hi Conrad. Considering how close we live to Chester it is quite embarrassing that I have never been before. What a big mistake. It is a lovely place.
I didn't expand on the meal we had at Simon Radley's, We are not accustomed to eating 2 star Michelin standard that's for sure, but it was first class and a lovely surprise from Sheila.