Our backpacks have been packed for around 3 weeks now. The plan was to do a long weekend hike in Cumbria. The weather forecast for our planned trip given the night before, was for a very hot day and not changing. Temperatures hitting 30C. We put a hold on the plan. Leave it a week i said and it will be raining. It didn’t happen, the following weekend was just as hot. Plan postponed again.
It goes to show, and my blog reading list proves it, that few of us have been doing anything other than short walks whilst we have had baking weather. (There are a couple of exceptions, but i am generalising here). We moan about the lousy weather but more hikes are done in lousy weather. It just goes to prove we love rain really.

We were getting cabin fever, even Dorothy, Sheila’s mum was keen to get out. It was decided that we would get the train and walk Todmorden to Hebden Bridge and onto Sowerby Bridge and get the train back. No hills and about 12 miles. This section of the Rochdale Canal is particularly beautiful as are the villages too. 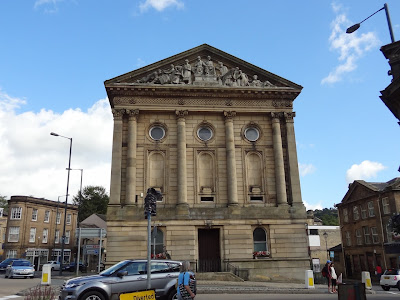 Breakfast was had in Todmorden across the road from the stunning Town Hall building. It’s beautiful outside but just take a look at this link here and here. I’m sure you will agree the inside is just splendid. The people of Tod should be very proud of it. 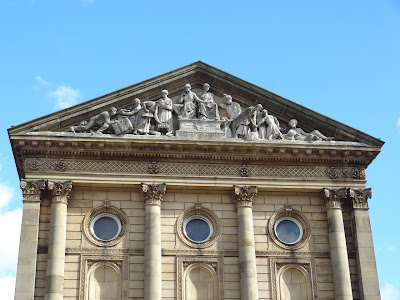 The building was designed by John Gibson of Westminster. It was opened in April 1875.
Set within the tympanum of the deeply moulded triangular pediment impressive statuary is seen. 2 central female figures linked in friendship are seated on a pedestal inscribed 'LANCASHIRE/YORKSHIRE'. To either side groups depicting the Lancashire cotton industry and the engineering and agriculture of Yorkshire. Fantastic. 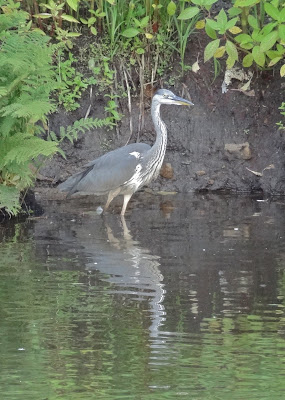 Once on the canal we found the library lock wasn’t working and a narrow boat was moored waiting for it to be fixed. Sheila spotted it had an Aussie flag on the side and then a lady appeared impressed that it had been noticed. We had a chat about the cricket for a few minutes before bidding farewell and ill fortune for the result of the match. 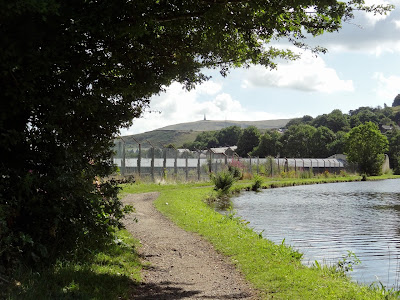 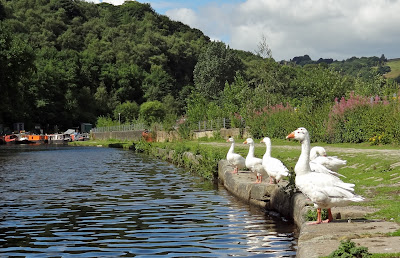 Not the usual Geese we normally see on the canal. 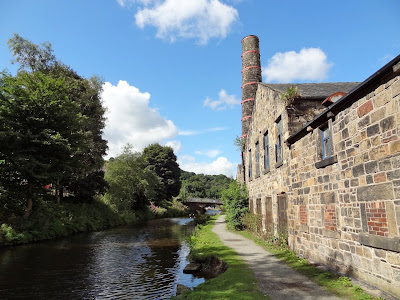 One of the many old mills canal
side and numerous chimneys are still to be seen. 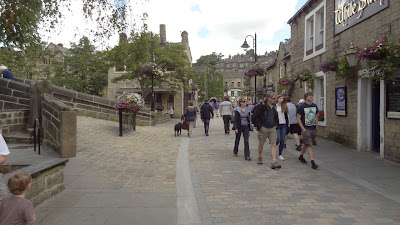 We had a light shower just prior to us getting to Hebden Bridge but it wasn’t enough to get the waterproofs on. But the sky was very threatening. Hebden was it’s usual self, very busy. But today even more so because there was a Vintage festival on in the park. We was going to go and have a wander round the park but we wasn’t going to pay £5 a head to get in. As there were numerous stalls and food vendors which we would have made purchases from we don’t think that paying for the privilege of spending money is very fair. IMO. 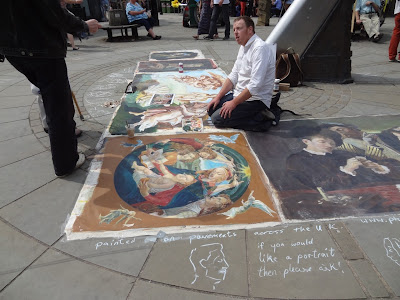 Pavement Painter
Back on the canal and heading east for Sowerby Bridge. It was getting very warm and we made numerous stops to take on liquid. 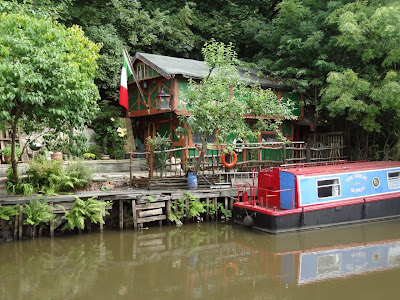 There are many people living full time on the Narrow Boats here and around Hebden and although there are some quite unusual structures like the one above, there are also many that are an absolute eyesore and should be removed. 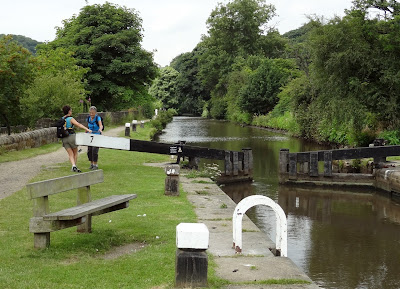 We stopped for a chat to the owners of a boat having just come through the lock and Sheila did the good thing of closing the locks for them. 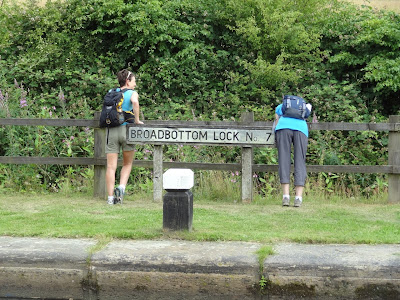 I found this caption quite funny but others didn’t. I don’t know why! Ha 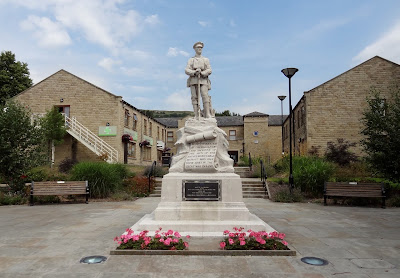 Just before we reached Mytholmroyd the towpath was closed for work being carried out. The diversion was through the town. I was glad i had taken a large scale street map. It came in handy.
Above is the war memorial that has recently been refurbished after it had been mindlessly vandalised. Eventually we found the canal again. 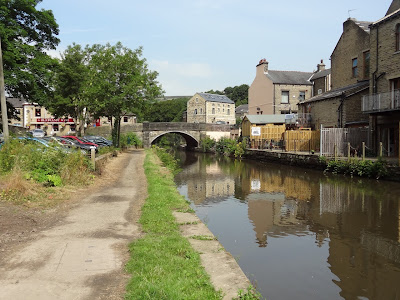 Looking back to the Old Brandy Wine pub in Luddenden Foot. 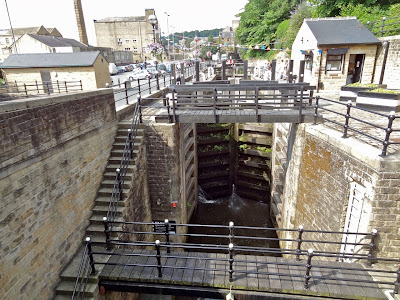 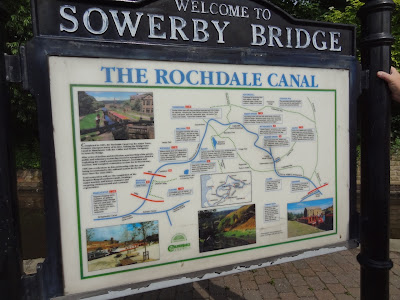 This marks the end of the Rochdale Canal. East of here it joins the Calder and Hebble Navigation.
It had been a good walk and after a quick couple of pints of shandy. Yes honest guv it was shandy. We caught the train back home.

The backpack is still leaning against the wall. Waiting to go.

I'm not about to complain about the hot weather, we get precious little of it, but I certainly don't cope with it as well as I once did and it's definitely restricted the walking activity of late. Apart from anything else, the prospect of a couple of hours in the car to get to north or mid Wales hasn't appealed much.

We've either stuck to routes which are within a short drive (with the inevitable repetition) or those which are accessible by rail, such as the Malverns.

I've got a new waterproof as well: a lightweight one, purchased from a shop at full retail price. This was a rare experience for me and I'm still a bit light-headed from it all.

Hi Oss, New gear. And some rain to try it out as well.

My thought exactly about the weather. Are we ever happy.

My thoughts exactly Alan, my last trip was too hot for comfort. The heat totally drained me. Looks like you had a lovely wander along the tow path. Fantastic photos.

Thanks Dawn. We still needed plenty of water on this low level flat route so the thought of a steep backpack was not appealing. We must get out soon though as lethargy is creeping in.

It's a great gentle route that one. I did the Todmorden centenary round last year and it was some good walking, up onto Stoodley Pike. I stayed at Mankinholes YHA, lovely little building!

Excellent. Reminds me of home.

Its a very picturesque walk and the villages are certainly worth spending an hour in. I’ve never done the whole Centenary round but i have done some of it and especially the Pike on numerous occasions. I’ve never stayed at Mankinholes either but walked passed it many times. Its a fantastic area and worth getting to know better which i intend to do.

Hi Martin, Yes its similar to home. Brickwork is different but the towpath is almost a copy.