A squelch around Cliviger

Yesterday (Saturday) we did a low level 10k walk with Dorothy. The usual one with cheese and onion toasties and coffee half way round. I don’t think i’ve mentioned that before come to think about it.
The weather forecast was better for Sunday than Saturday and that’s why we left our higher level route until today.

It was still dark when Sheila opened the curtains and i just pulled the sheets over my head and played dead for a minute or two. It will come light at some point, she said. I just muttered something like, well i will stay here until it does.

Any ways, i got up and checked the puddles in the bomb craters outside our house and it was raining. Not heavy but raining all the same. I thought the forecasters would get it wrong as usual.

Gradually dawn arrived (i don’t know where she'd been but i think she must have had a lie in too), we made progress getting the gear together and breakfast over. Off we went.

We parked up at SD889246. It was grey, misty, nippy but calm. We were the only car around and it was quiet. Strangely quiet. Maybe we are the only one’s up i told Sheila.

Here’s our route for today. We started and finished where it says 397 spot height near the base line. Map Scale 1:50,000 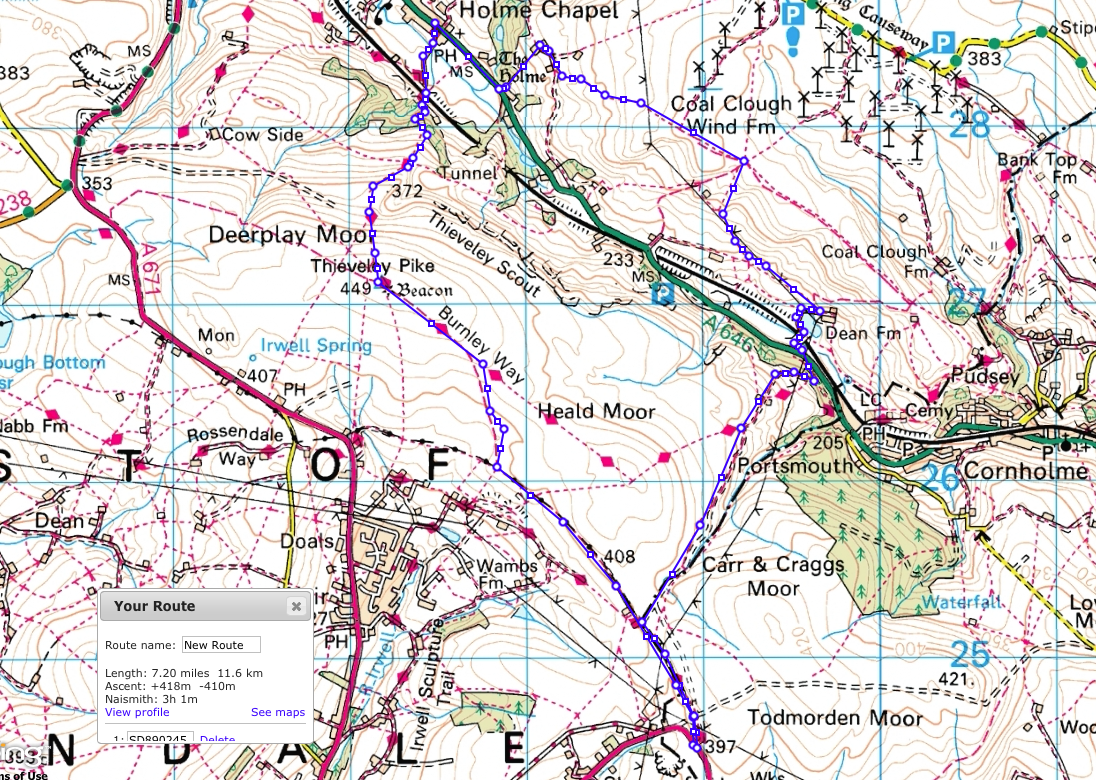 I noticed 2 more turbines had been erected on Todmorden Moor. That was a bit of a shock to the eyes. I now read that 5 of these are to be installed by Coronation Power even though the area is a protected area as the sign below points out. 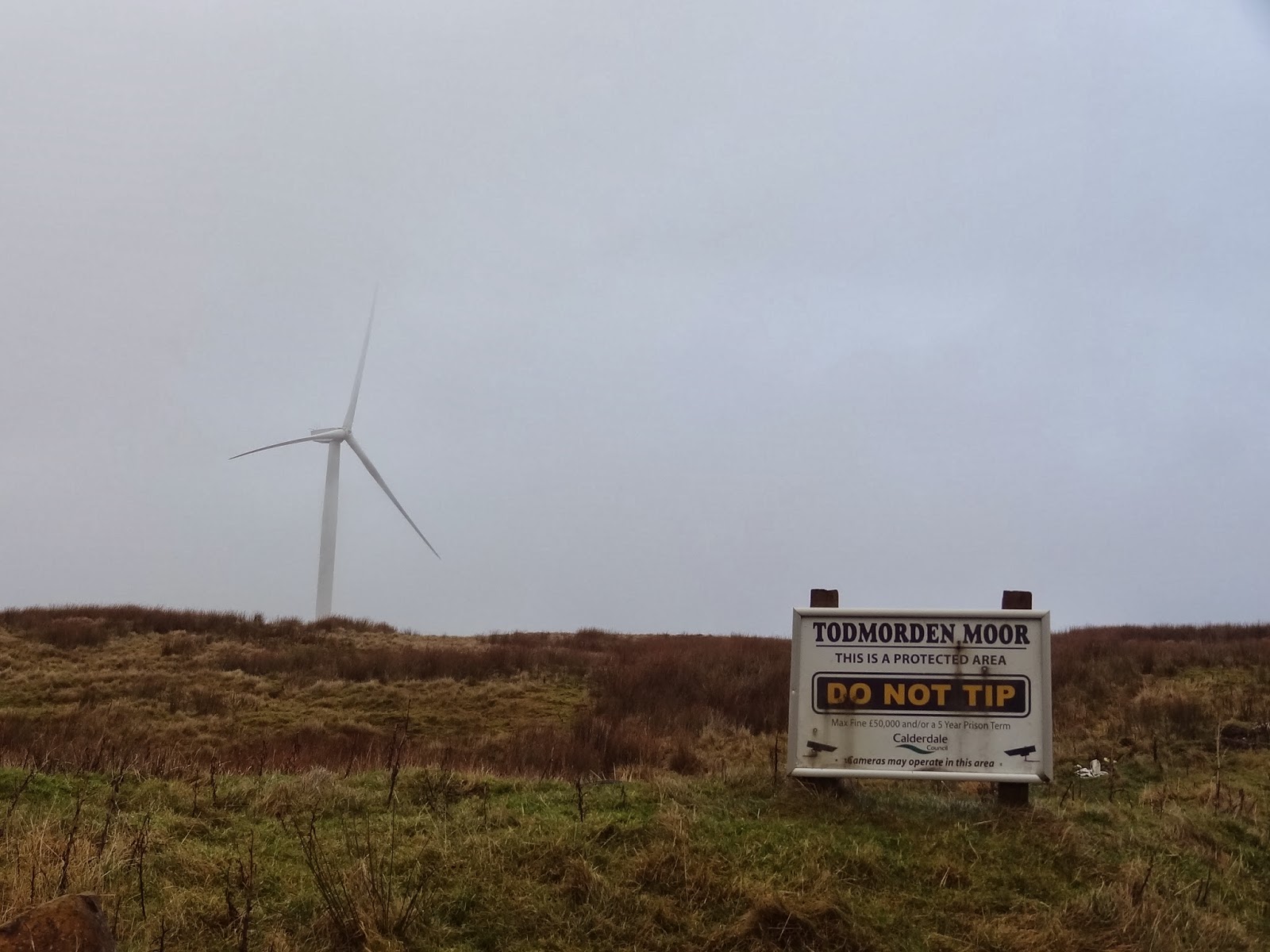 Just as we started to descend the LRT in the direction of Portsmouth we passed a sow of the wild boar variety. We met her other half a couple of months ago along this very track. Obviously used to people, she walked with us for about 100yds and then stood and watched as we marched on.

A few hundred yards on a herd of large horned Highland cows were on the path. Sheila was a bit nervous of them but they were no problem. 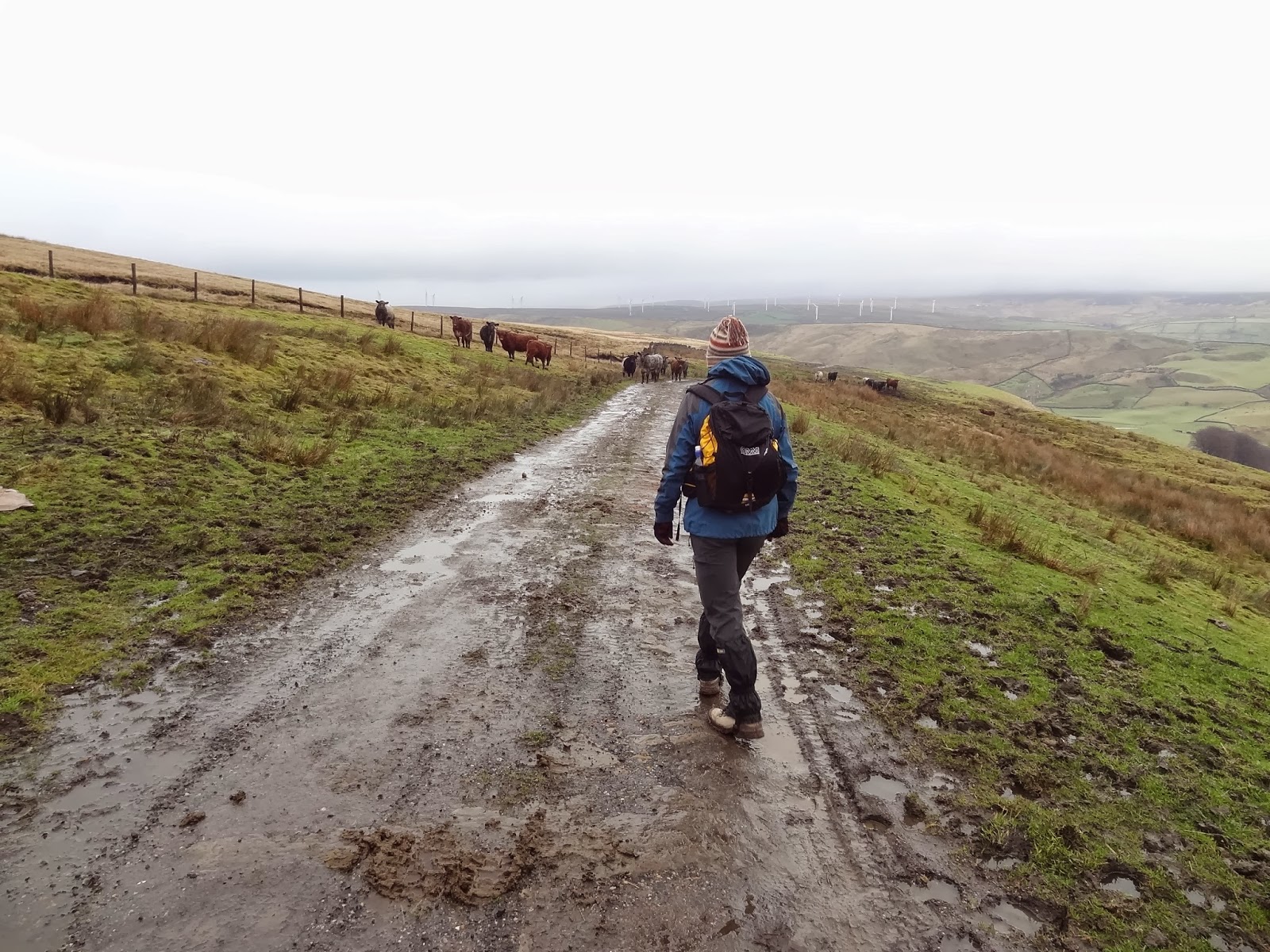 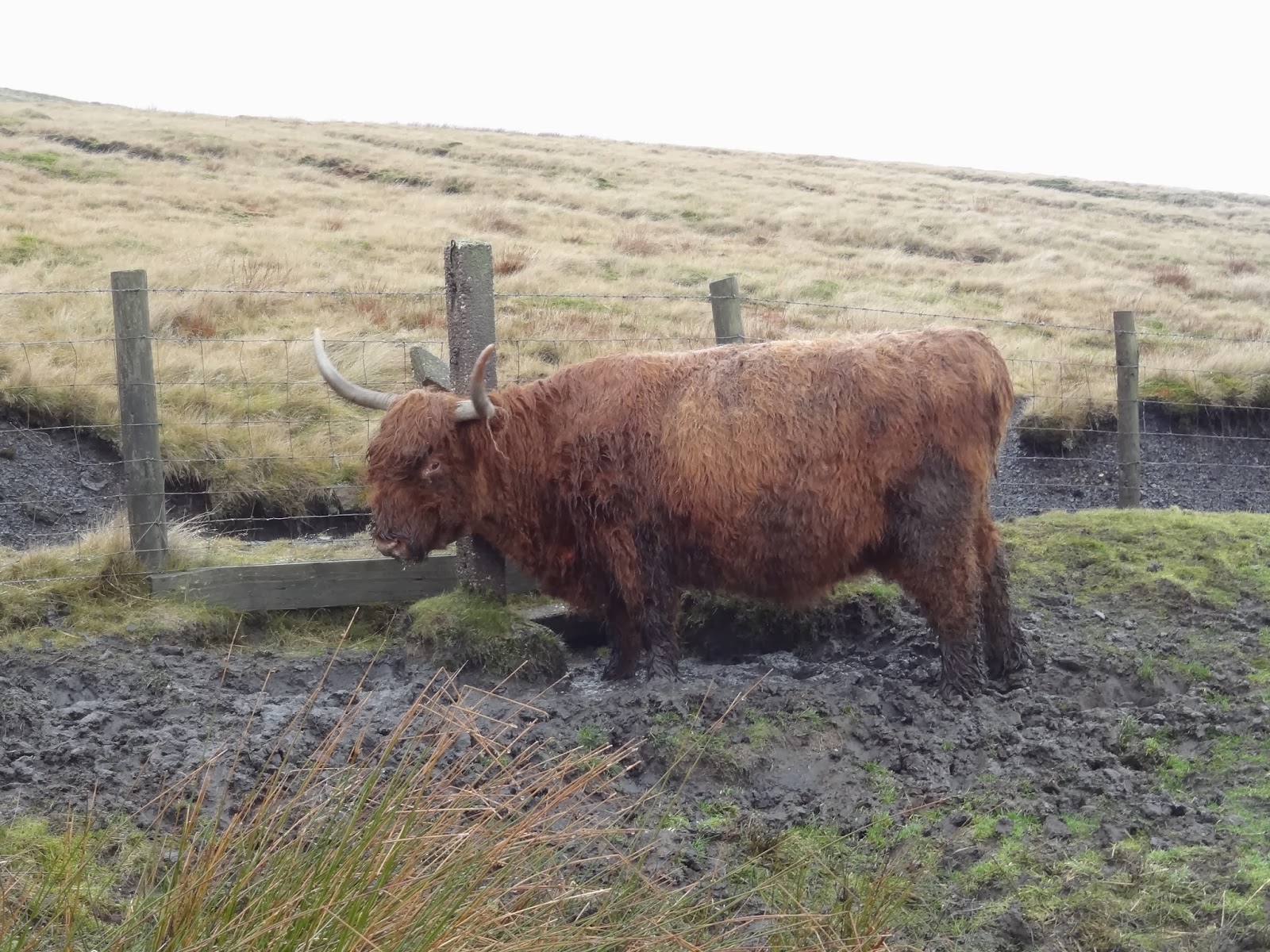 Just before we reached the A646 and below the Chatham Hill plantation we spooked 2 deer. I don’t know who was the most spooked, us or them. They stood and stared us out for about 10 seconds but as soon as i moved to get the camera they were off. Most inconsiderate.

The mist had all but gone now and we had a good view down the Calder Valley and across to Stoodley Pike. The heritage rail line passing through Portsmouth, Cornholme and Vale was clear.
I think Stoodley pike is visible from every bit of high ground in Lancashire and Yorkshire. We always  seem to see it on our walks. 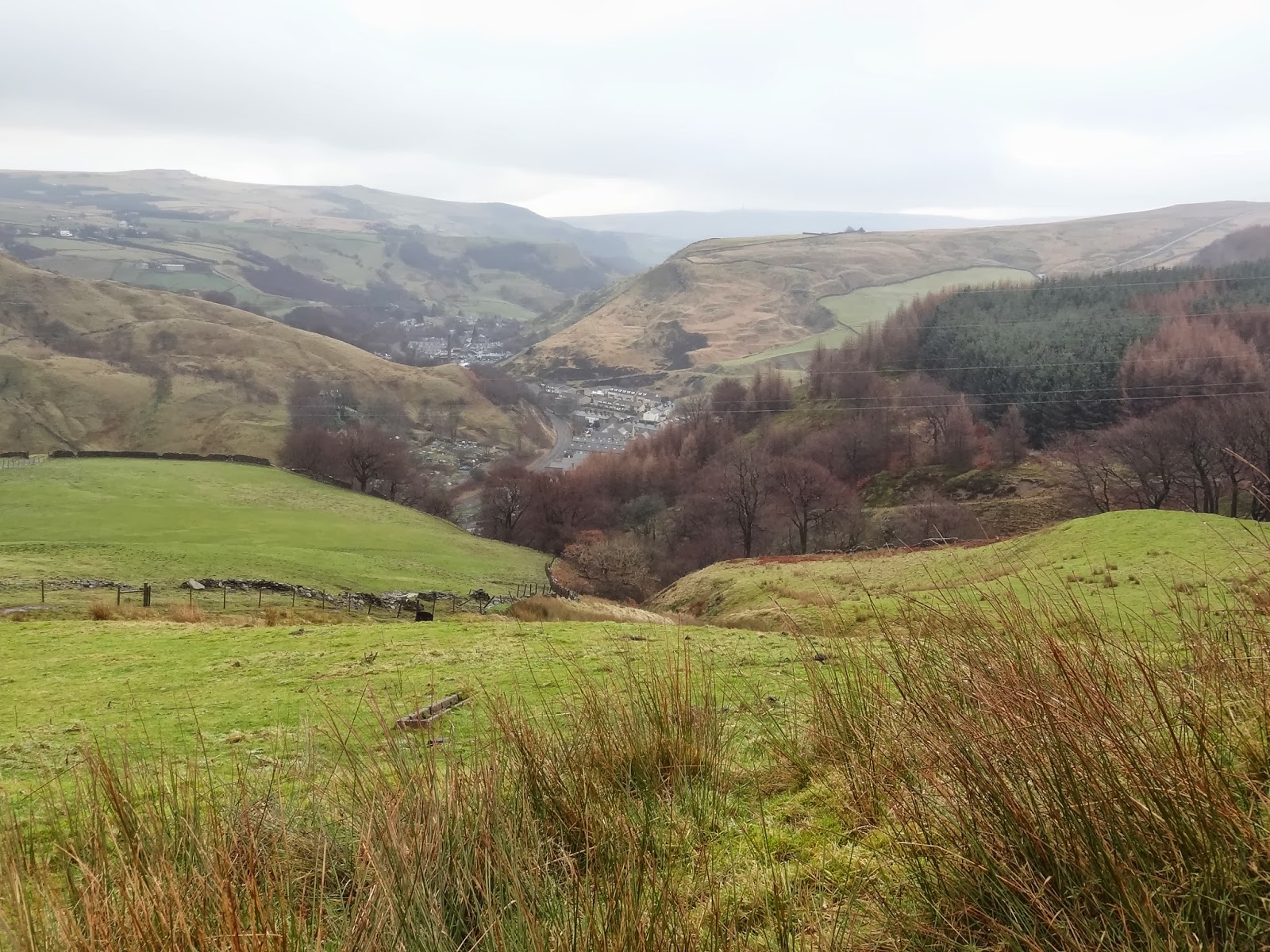 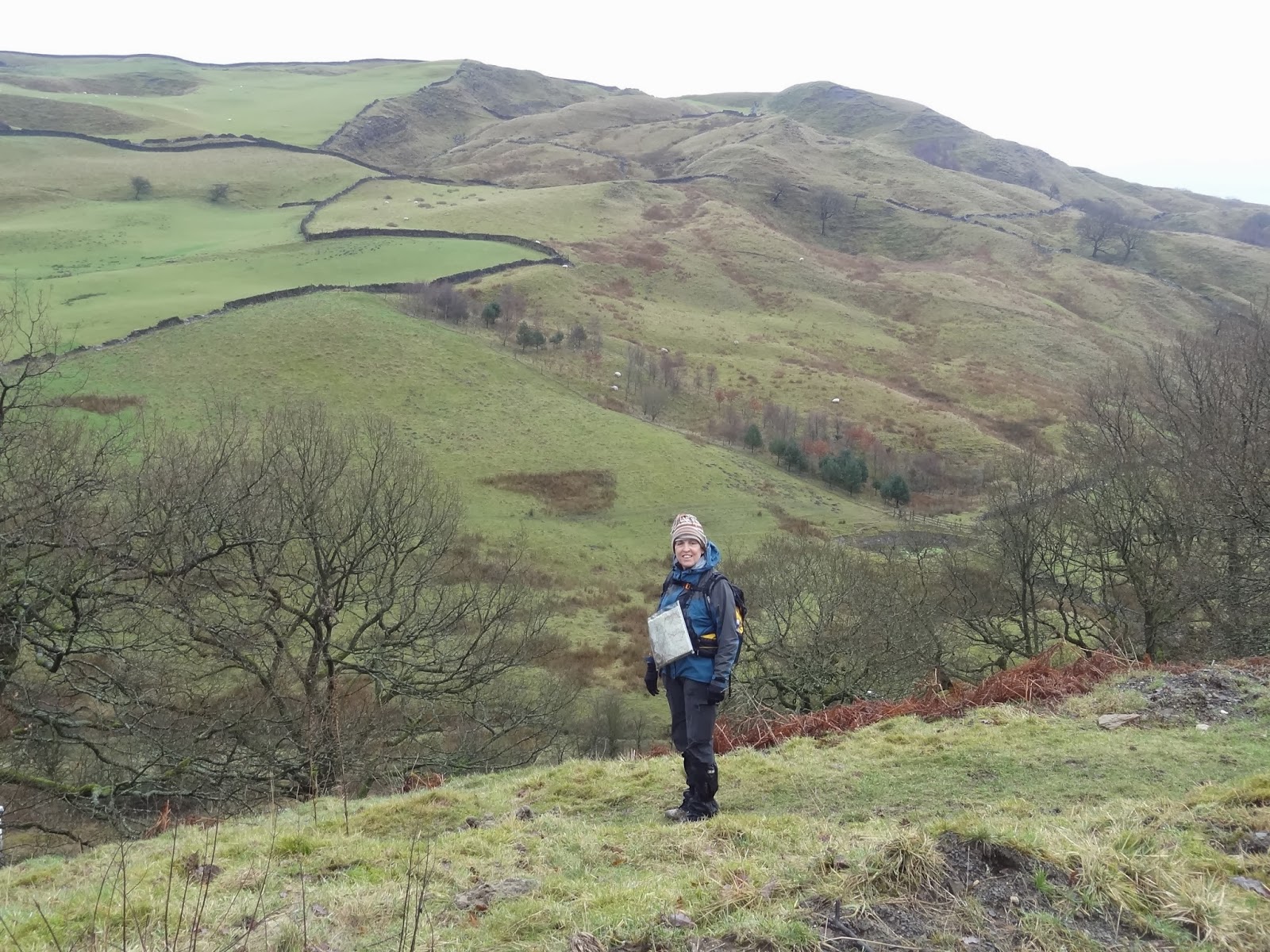 Chief Map reader and Whitaker Naze in the background 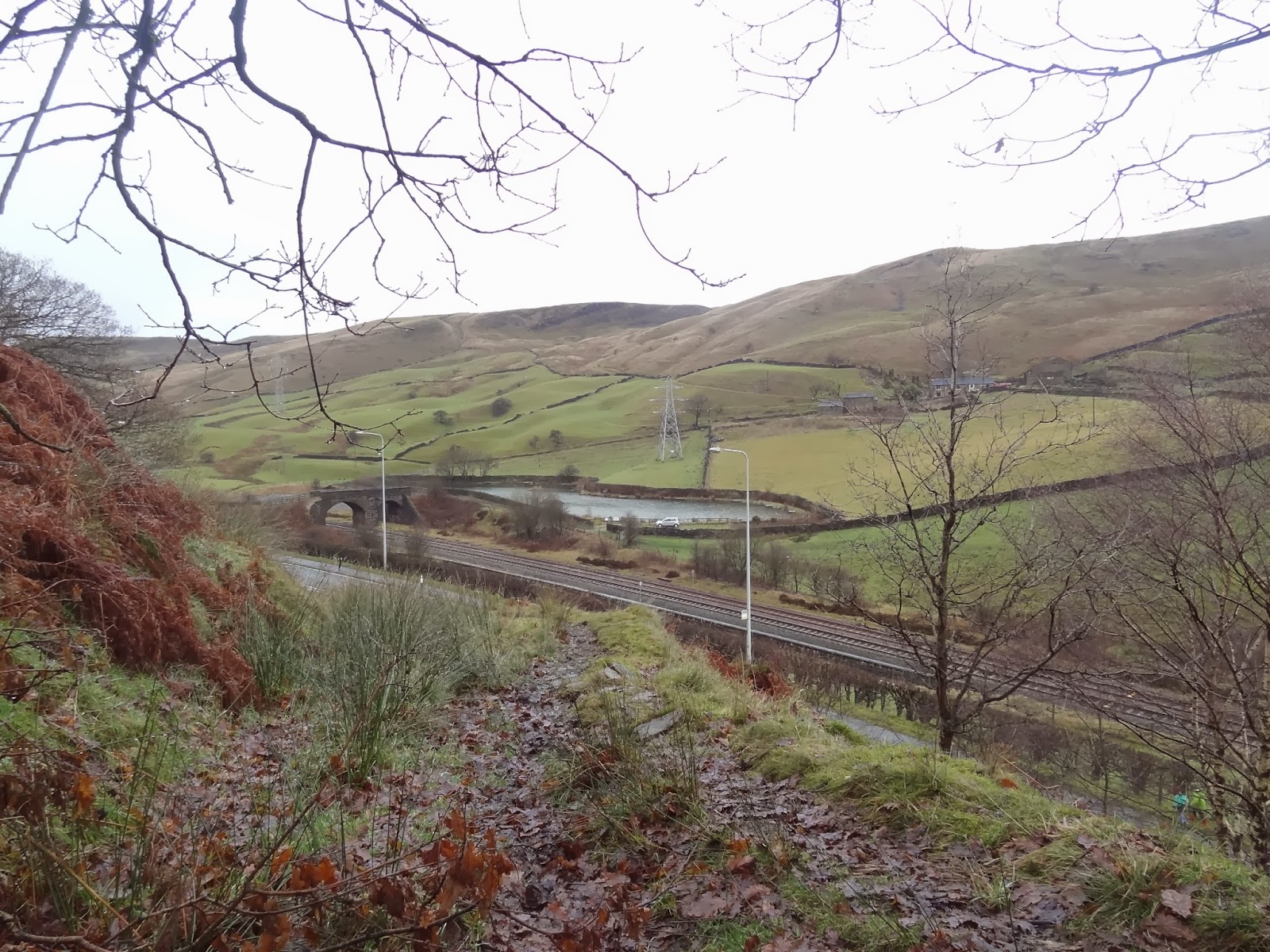 Heading for the reservoir below Dean Farm
This was our first visit to this area so much looking at the map took place. One prolonged spell was just beyond the reservoir as we headed up towards Black Scout. The 2 tracks which go NW towards a footbridge were not easy to locate so basically we just followed the line of the electricity pylons. We didn’t come across a (FB) footbridge but the track following the wall beyond the footbridge was visible on the ground and we followed it steeply to meet up with the wide Black Scout path. 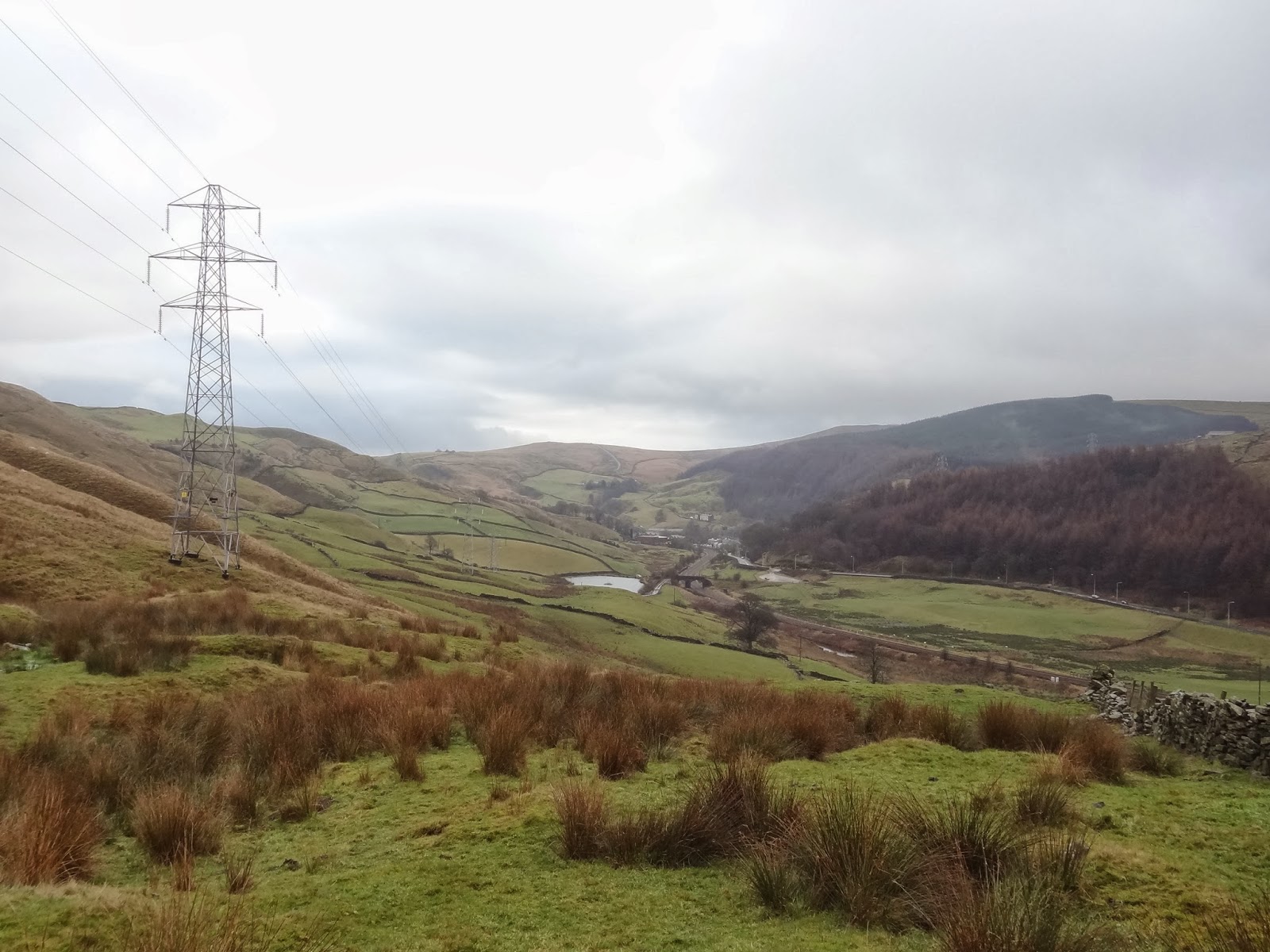 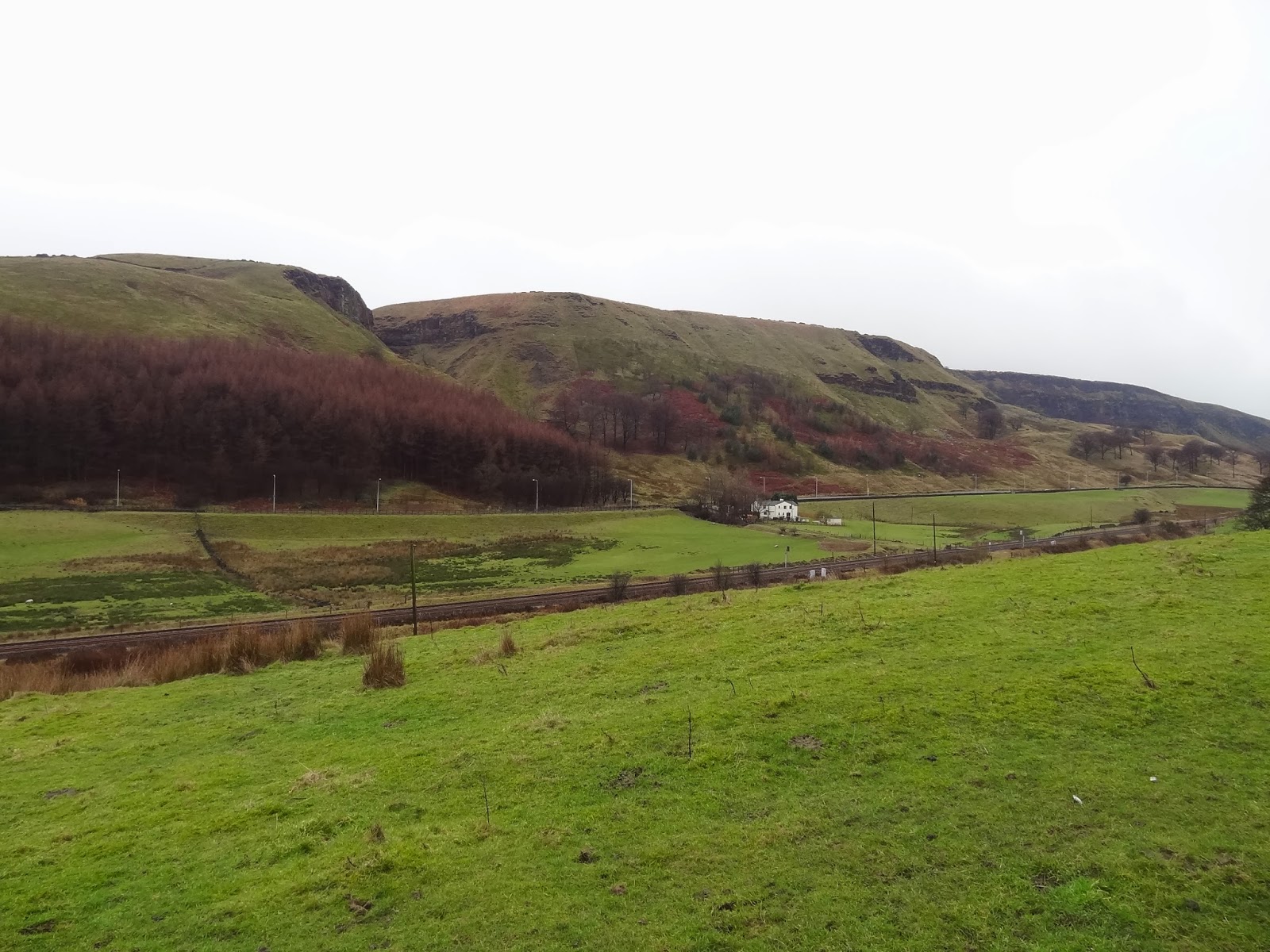 How green is our valley.
The path up Riddle Scout had us puffing and panting. Not many steep bits have been done for a while and it showed. Two walkers on the Black Scout path passed above us and these turned out to be the only walkers we saw the whole day. 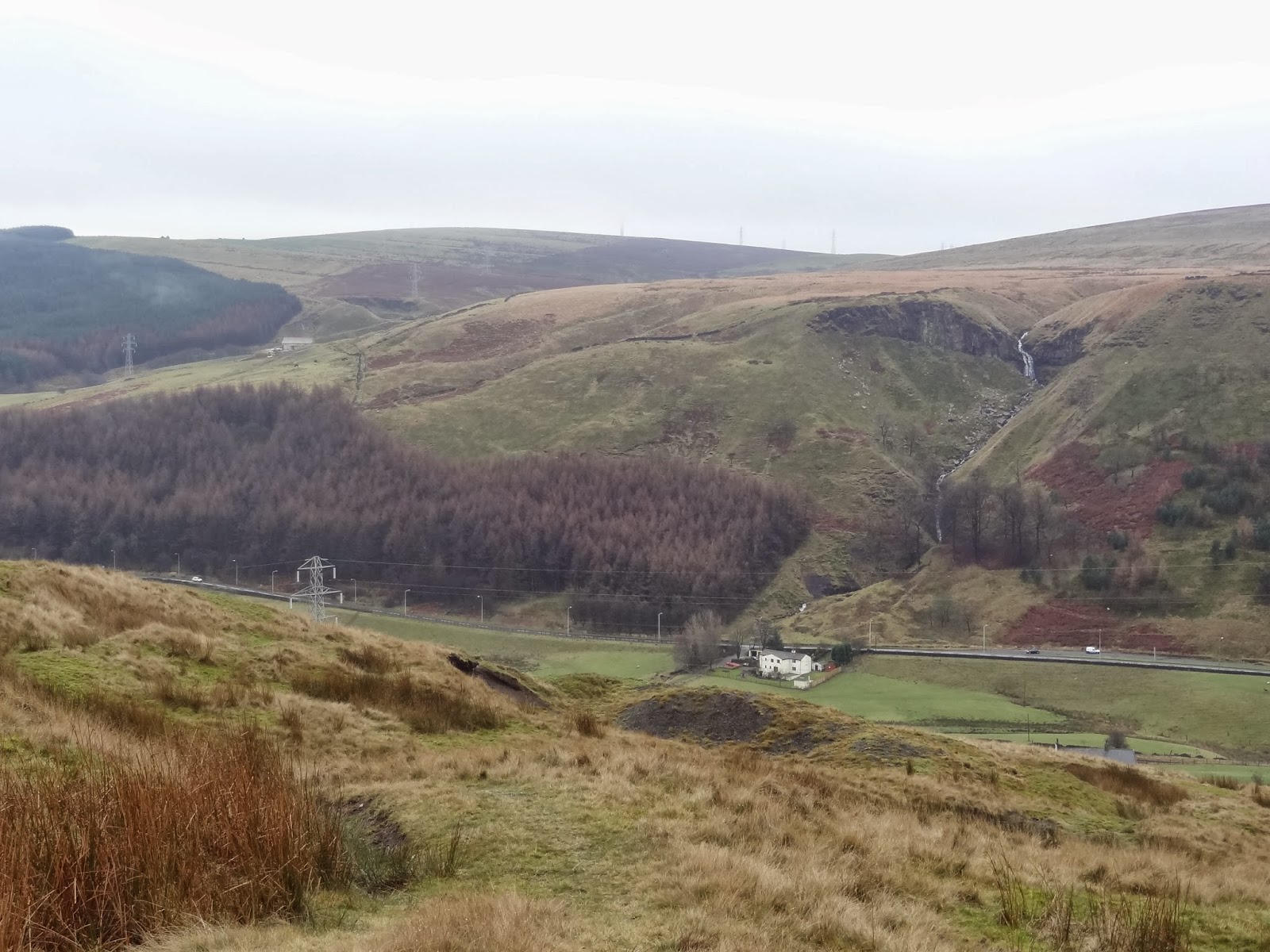 View from the top and the waterfall at Rattan Clough 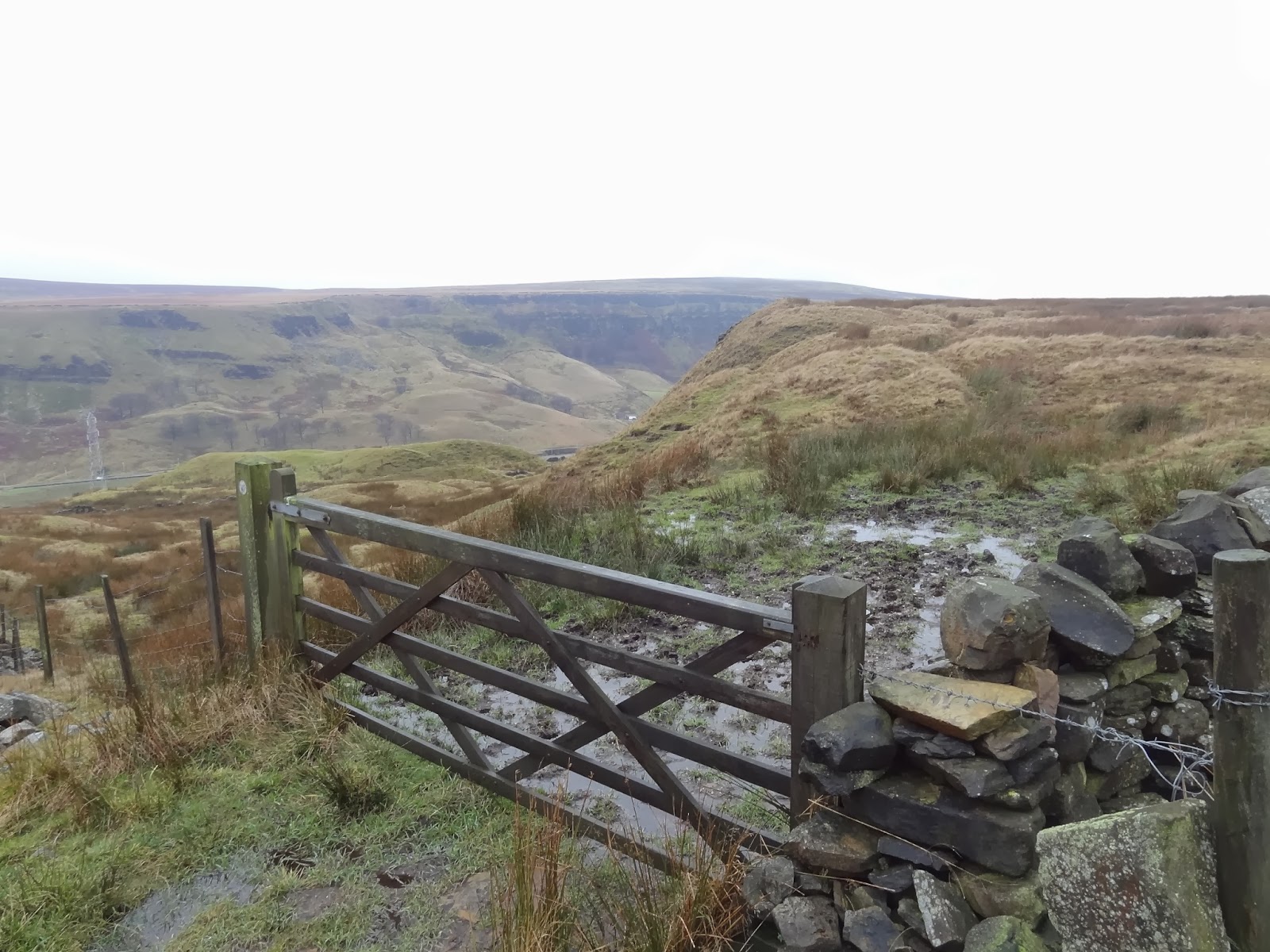 Black Scout path
We followed the wall for a while until we went under the power lines beyond the Lowe. Here we lost the path for a short distance. The two people we saw earlier were now only a few yards ahead and they said they would follow us as we seemed to know where we were going. We told them we didn’t know as it was our first time here. Picking up the farm track before Green Clough Wood we parted company. We headed SW to meet up again with the Main rd. 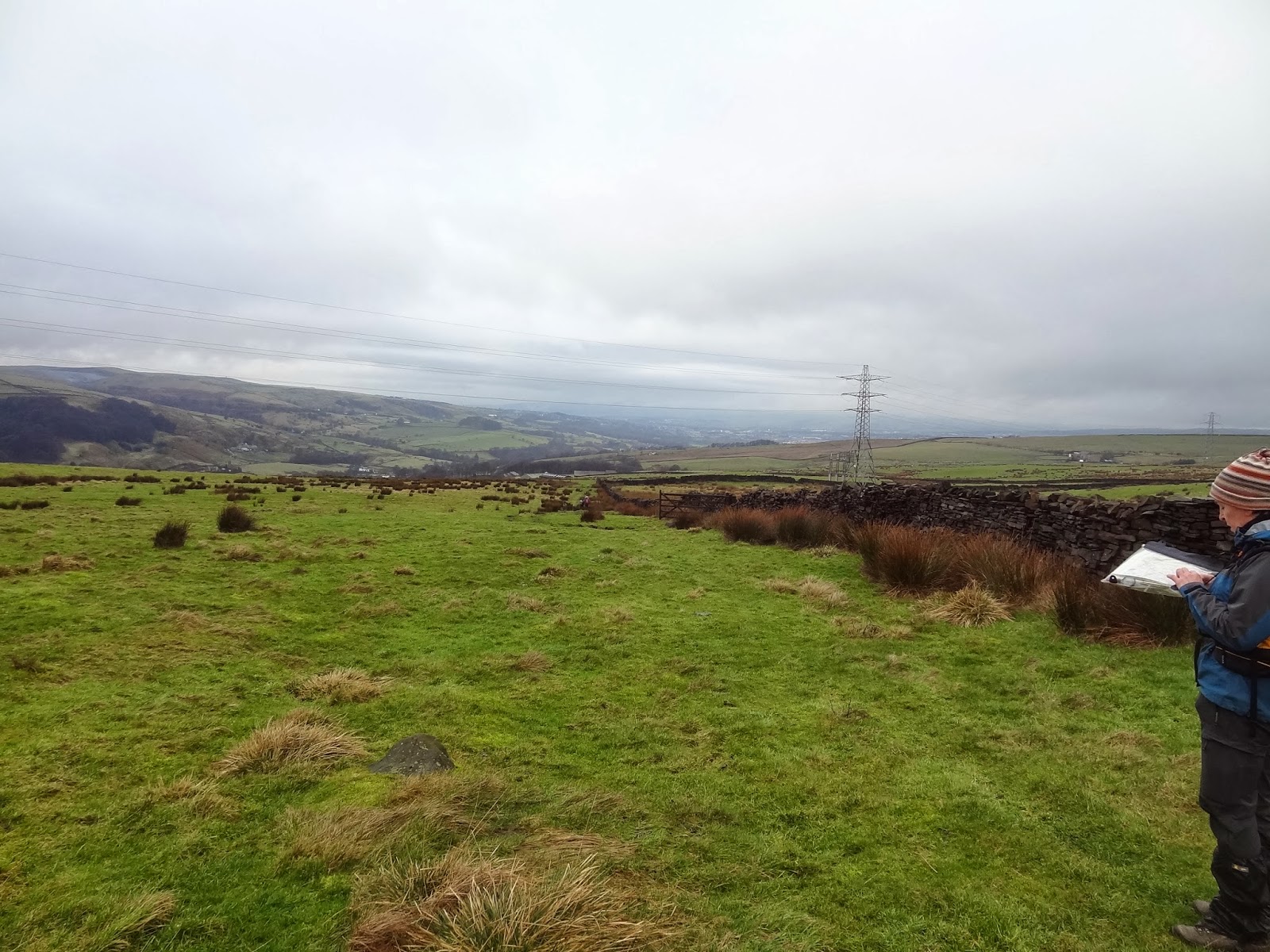 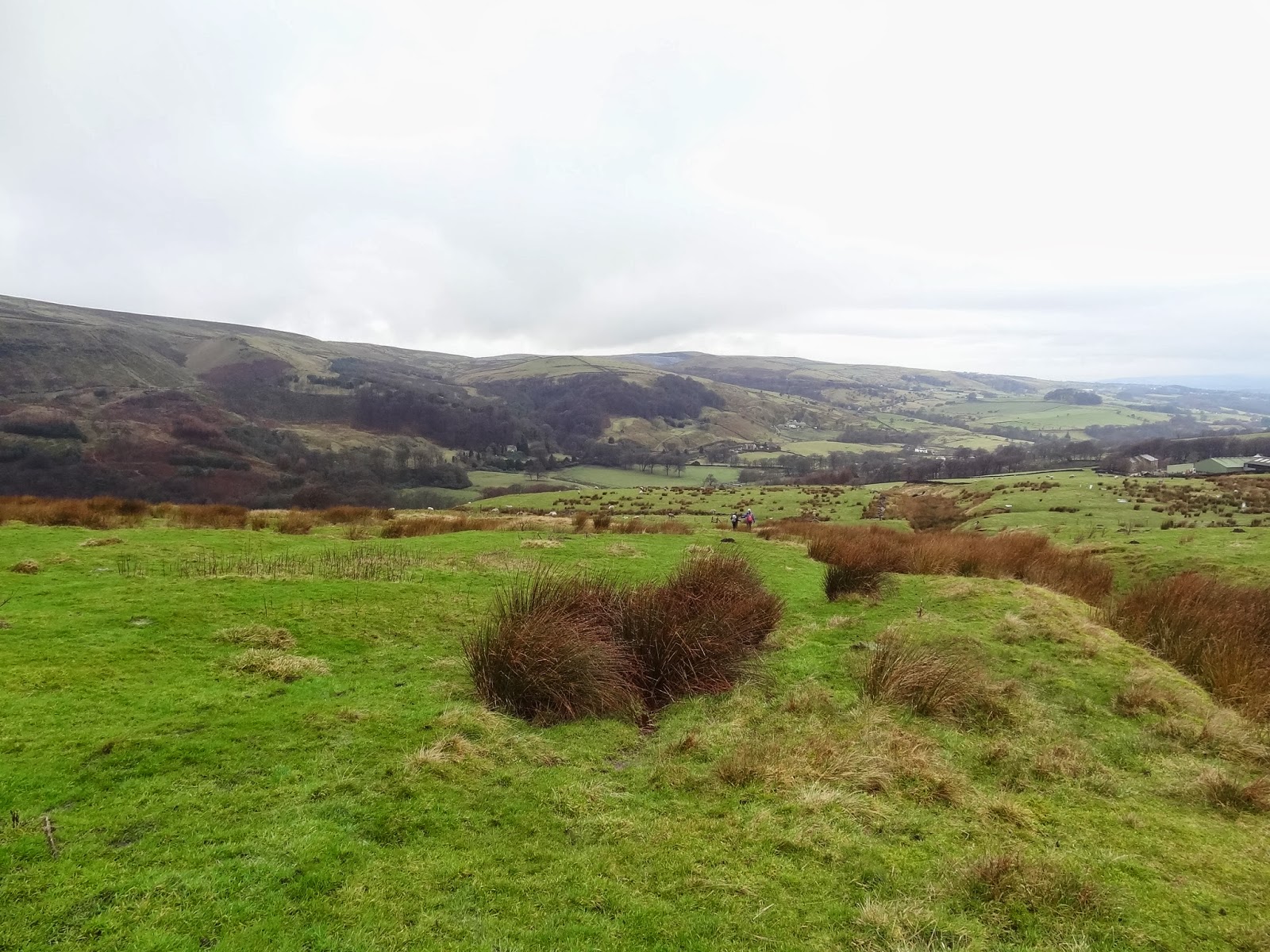 The only 2 walkers we saw all day 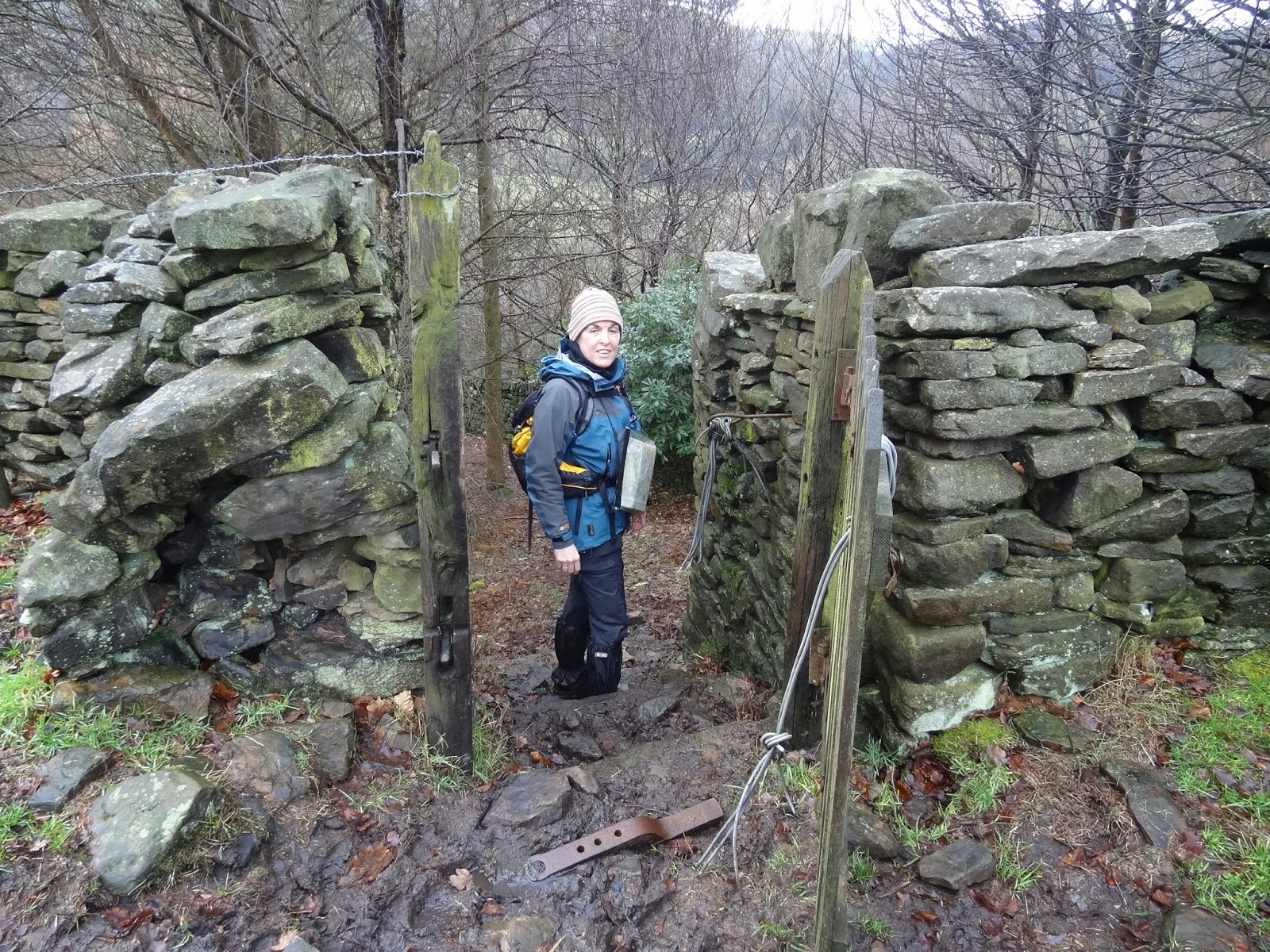 Path heading through Berrils Green Wood.
At the road, we passed a very nice looking Inn with numerous picnic tables. Very enticing as the smell of food wafted around us. We carried on, making a note to come back here and try it one summer afternoon. 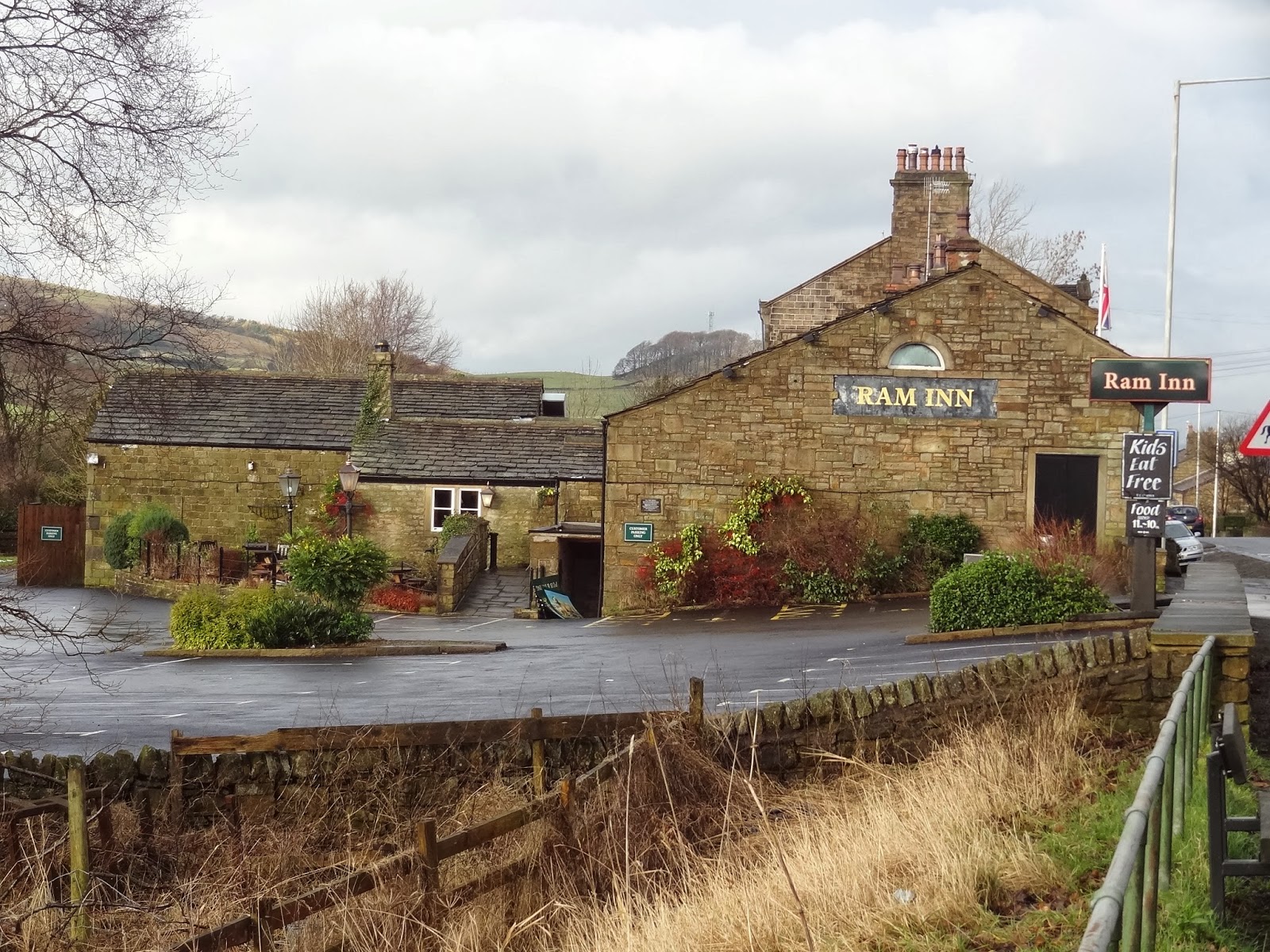 The Ram Inn at Holme Chapel
Our route turned south just passed the pub and led underneath the railway line into Buckley wood. I mentioned in passing to Sheila that this was quite a steep pull up to get onto the escarpment. I wasn’t wrong but the views made all the effort worth while. It turned out to be one of those up’s where you never seem to get to the top. 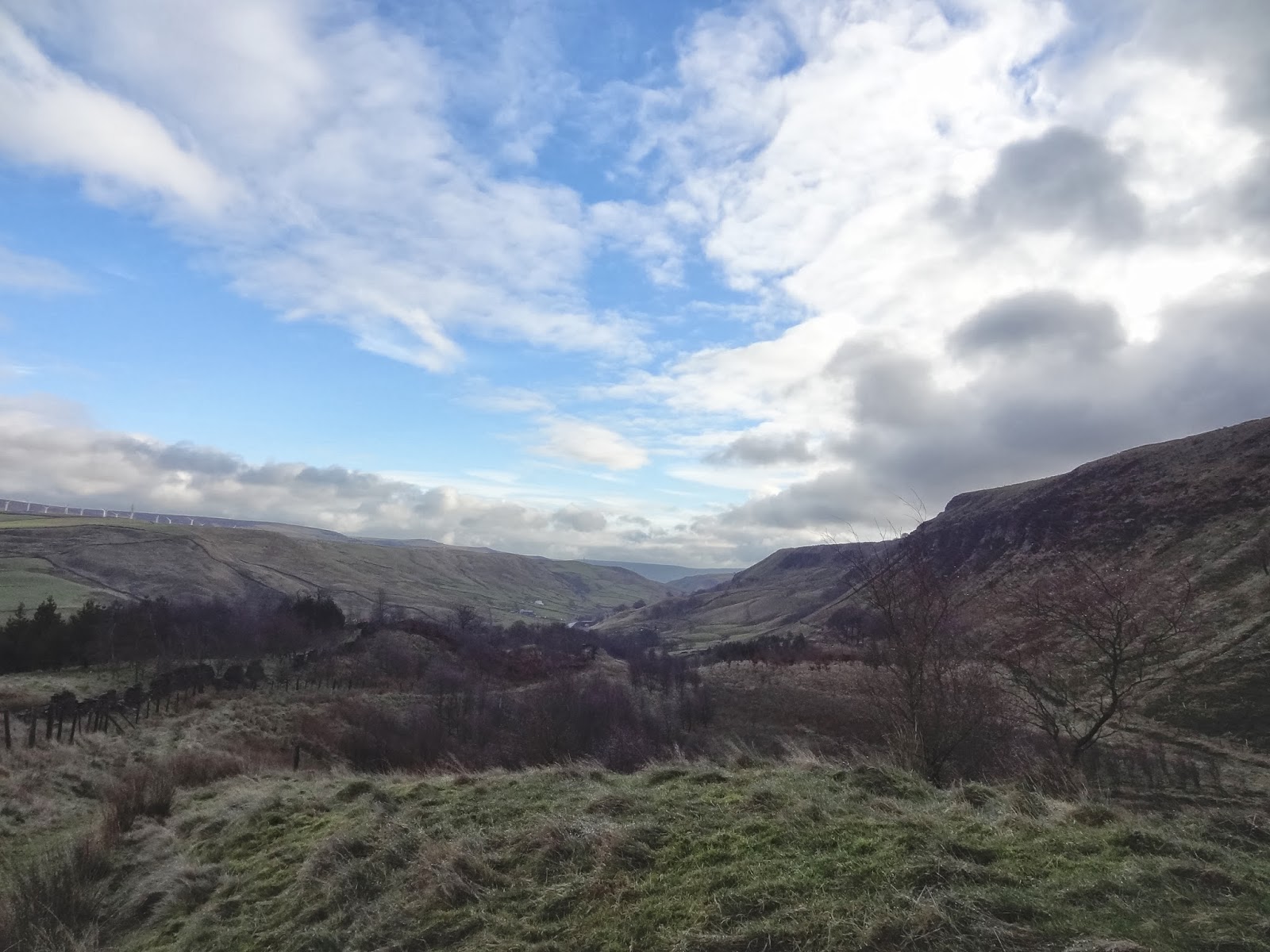 View of Thieveley Scout and the Parish of Cliviger from Dean Scout. The sun actually made an appearance. 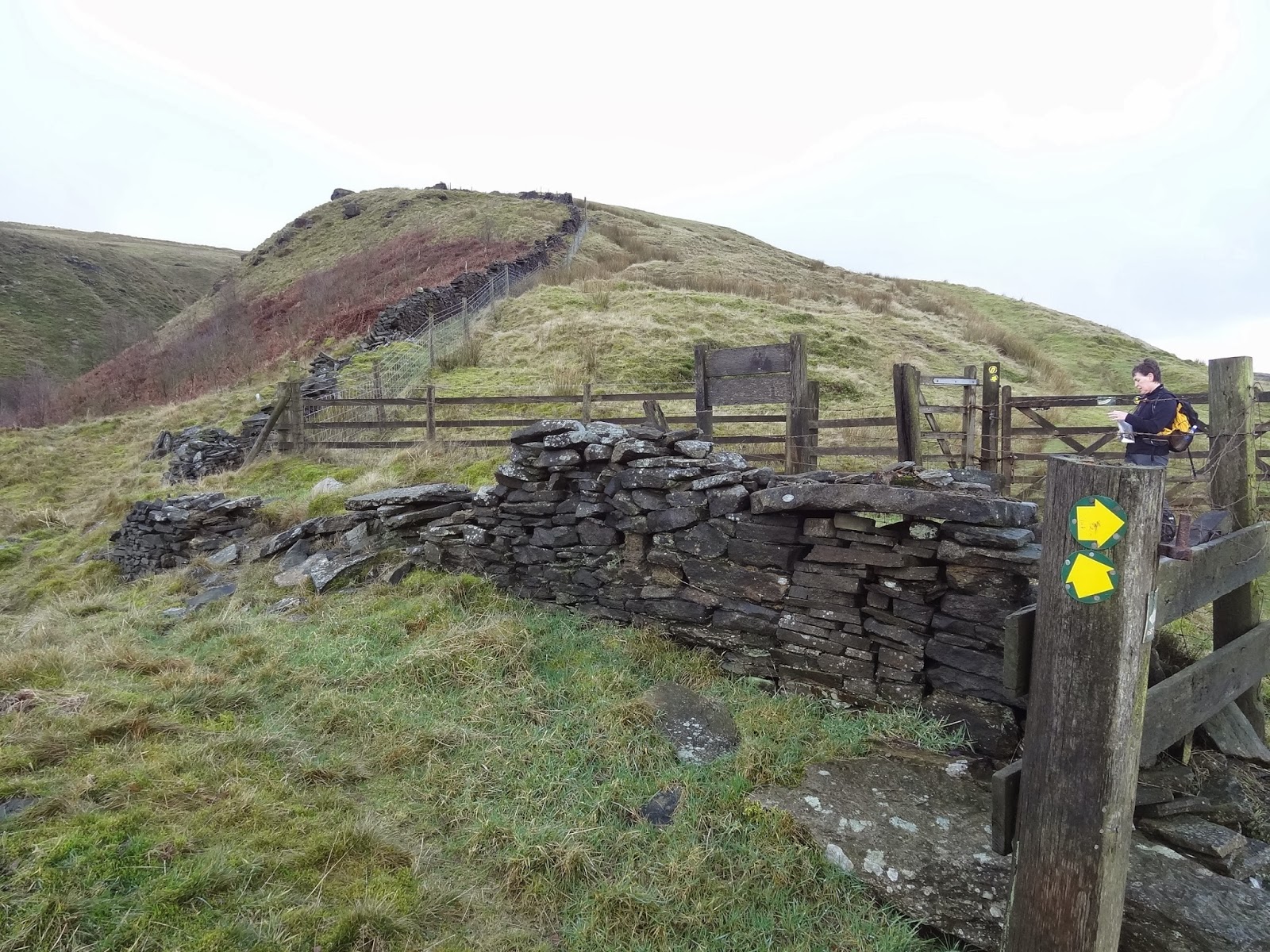 Which way is up Sheila? 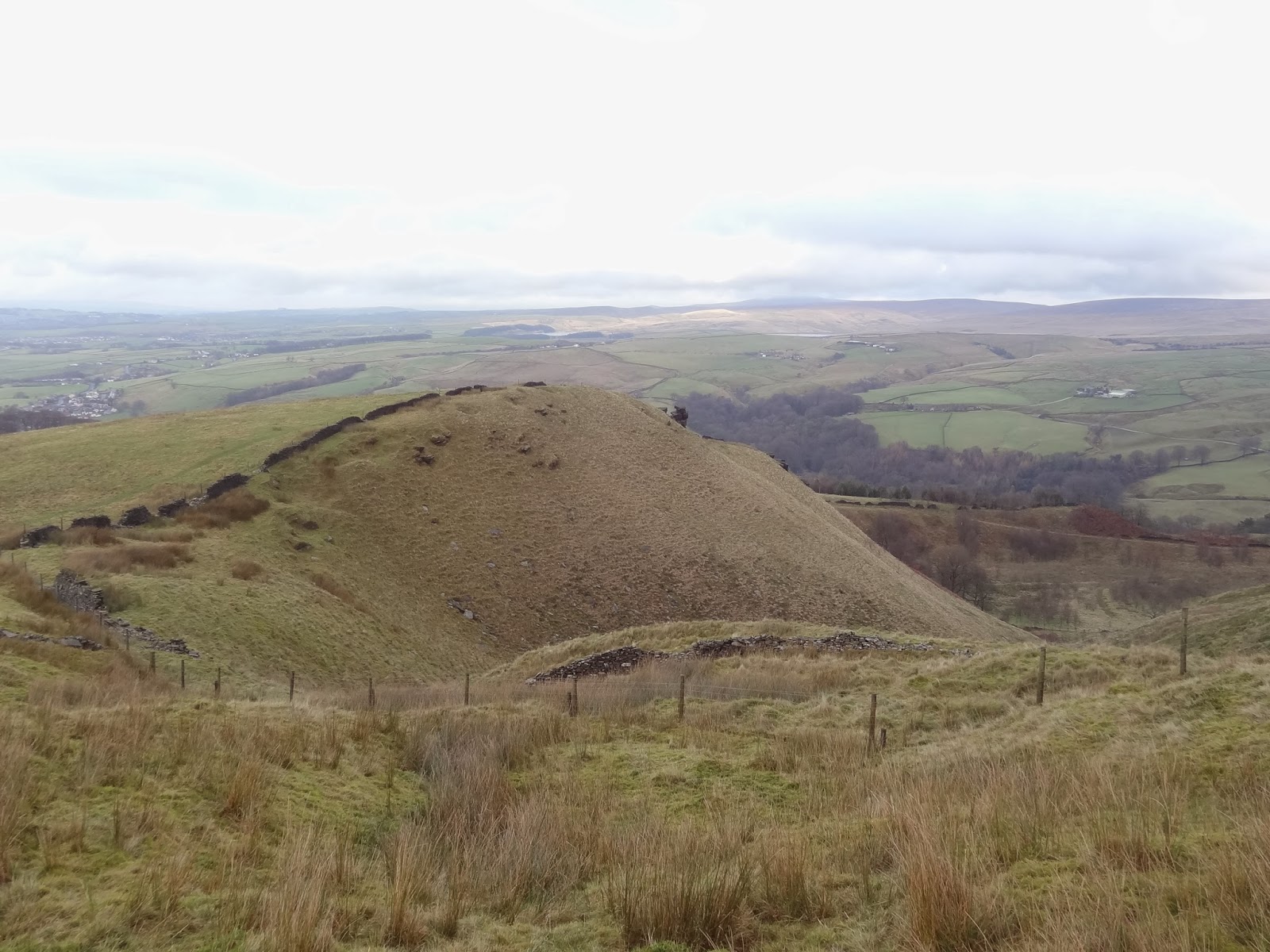 Bouldsworth Hill in the far distance and Beacon rock in the foreground. 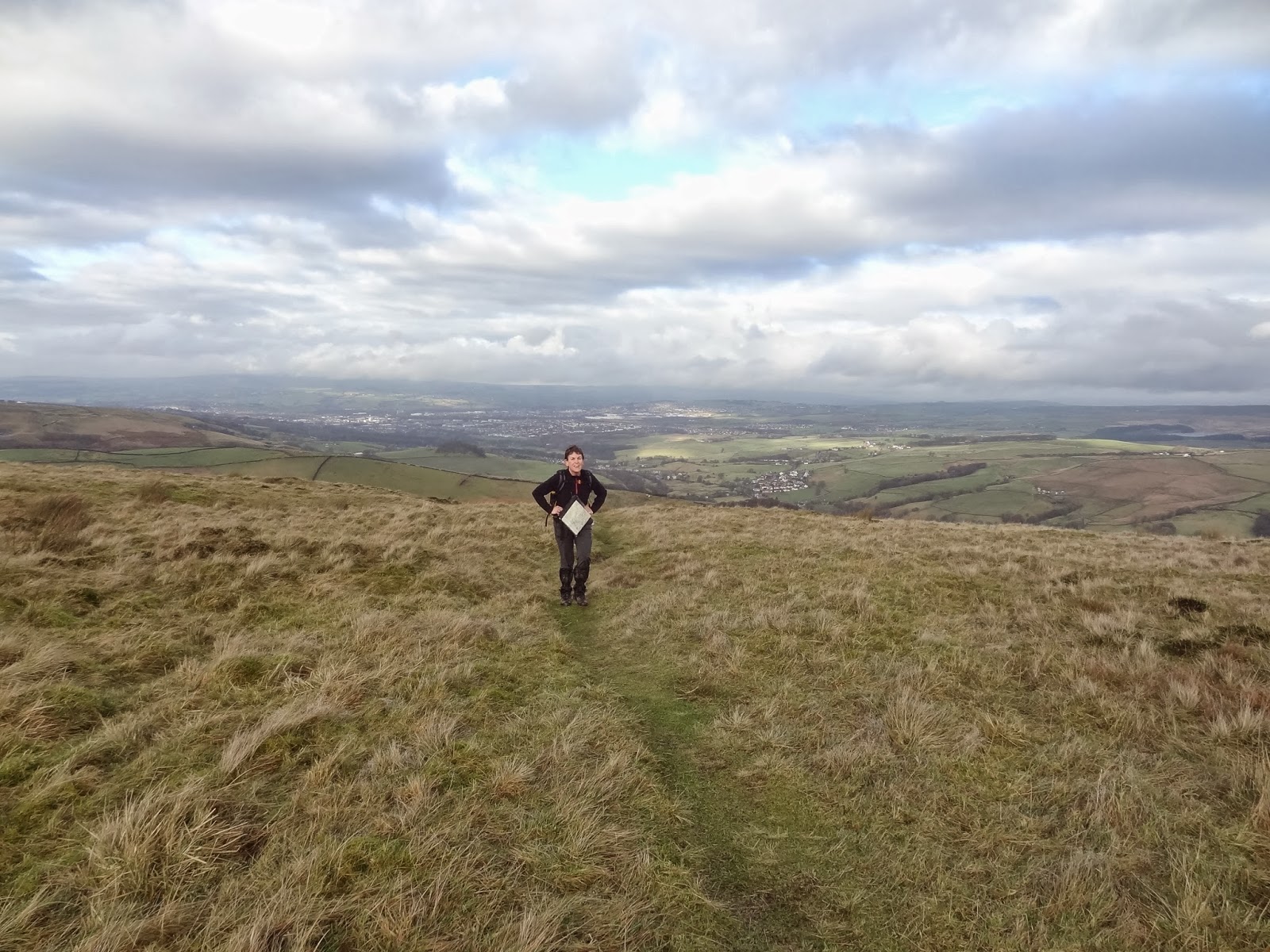 Sheila approaches the trig point. Burnley in the distance. 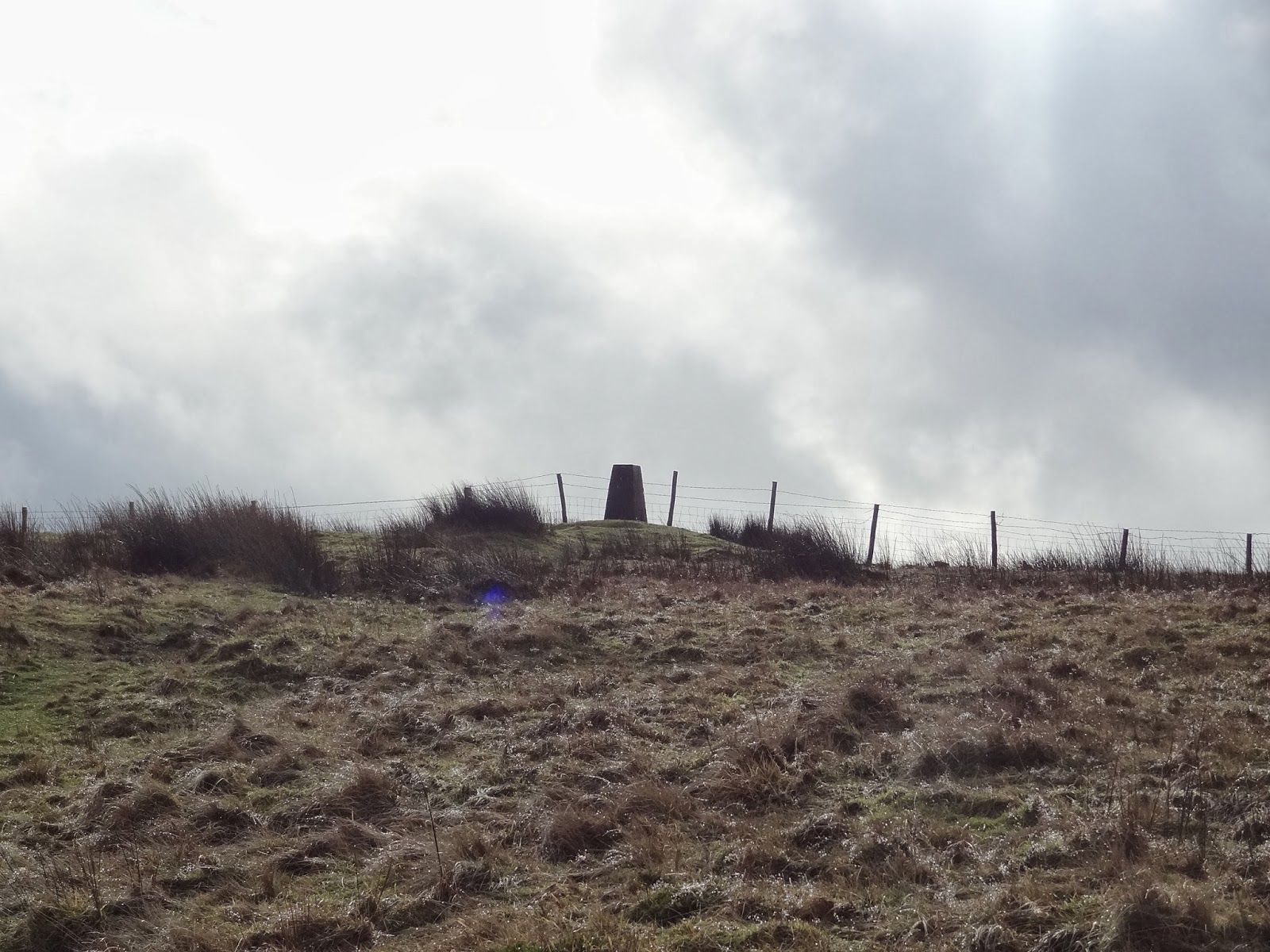 After a couple of false summits we made it to the trig point of Thieveley Pike. 449M 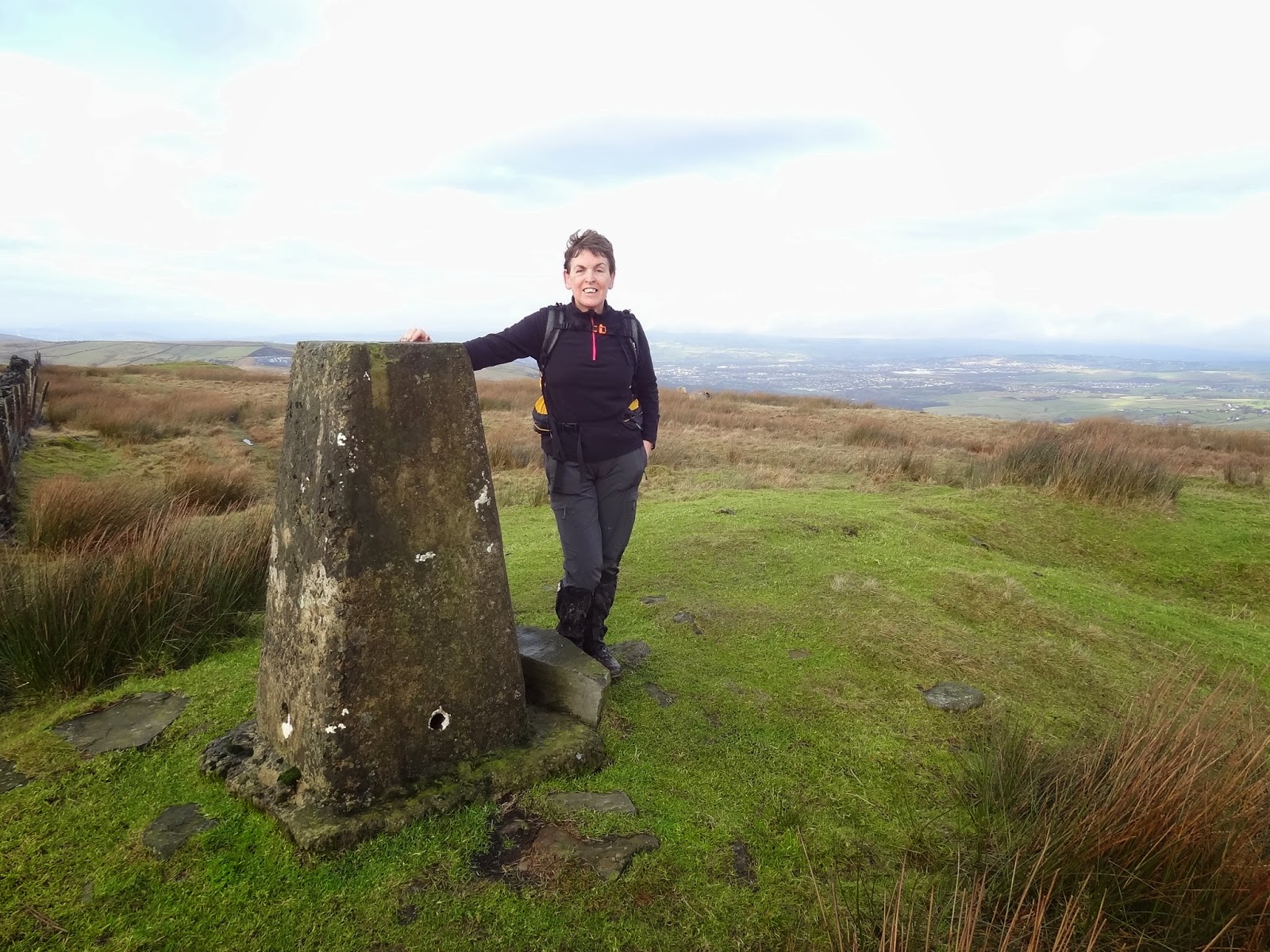 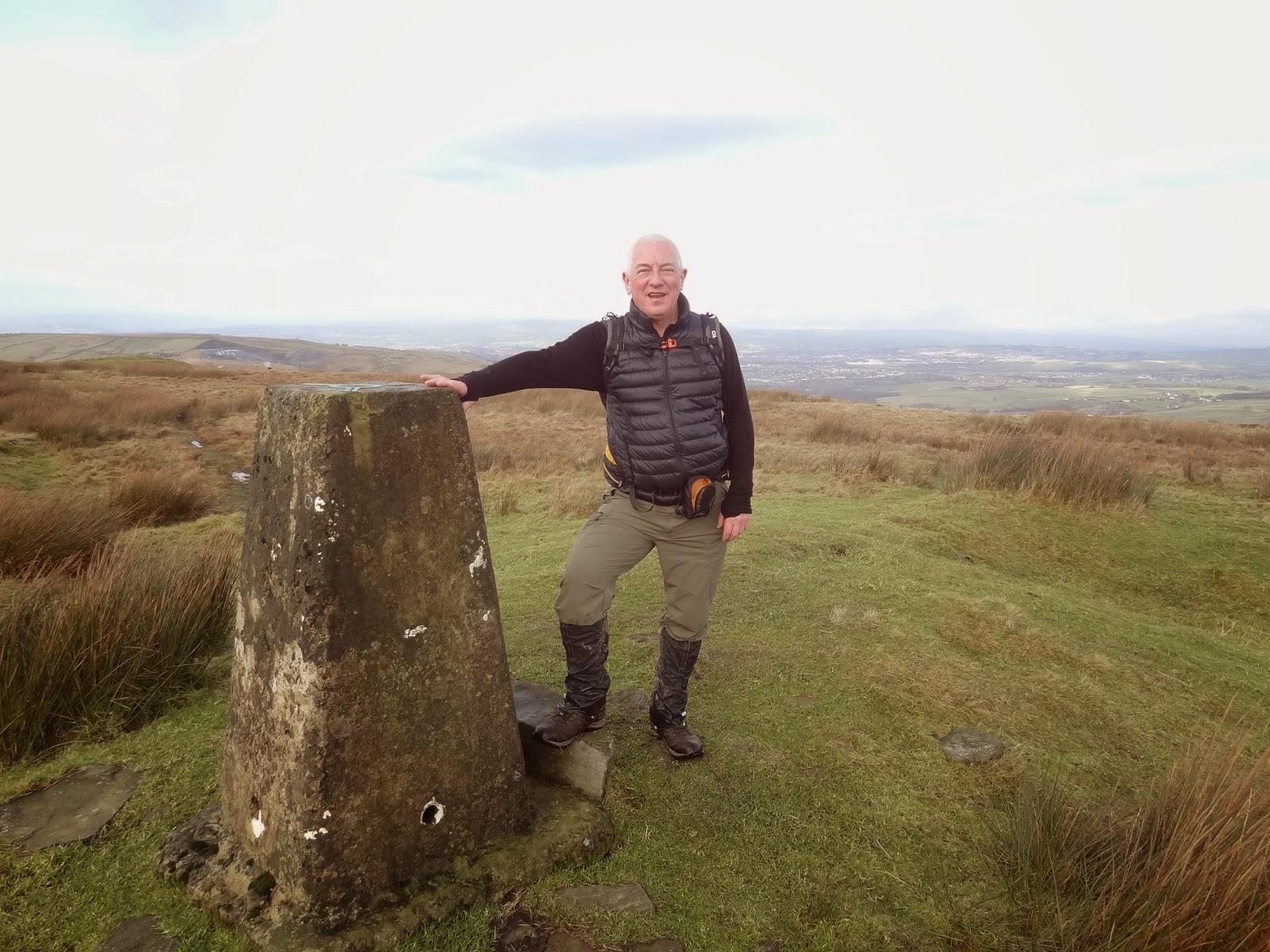 It was now way past lunch time but it had been our choice not to do the steep bit on a full stomach so at the first bit of dry slab we had our first stop.
It was quite warm up top which was a bit of a surprise and the views excellent. Our route south was part of the Burnley way and very muddy in parts as had been most of the walk to be honest. 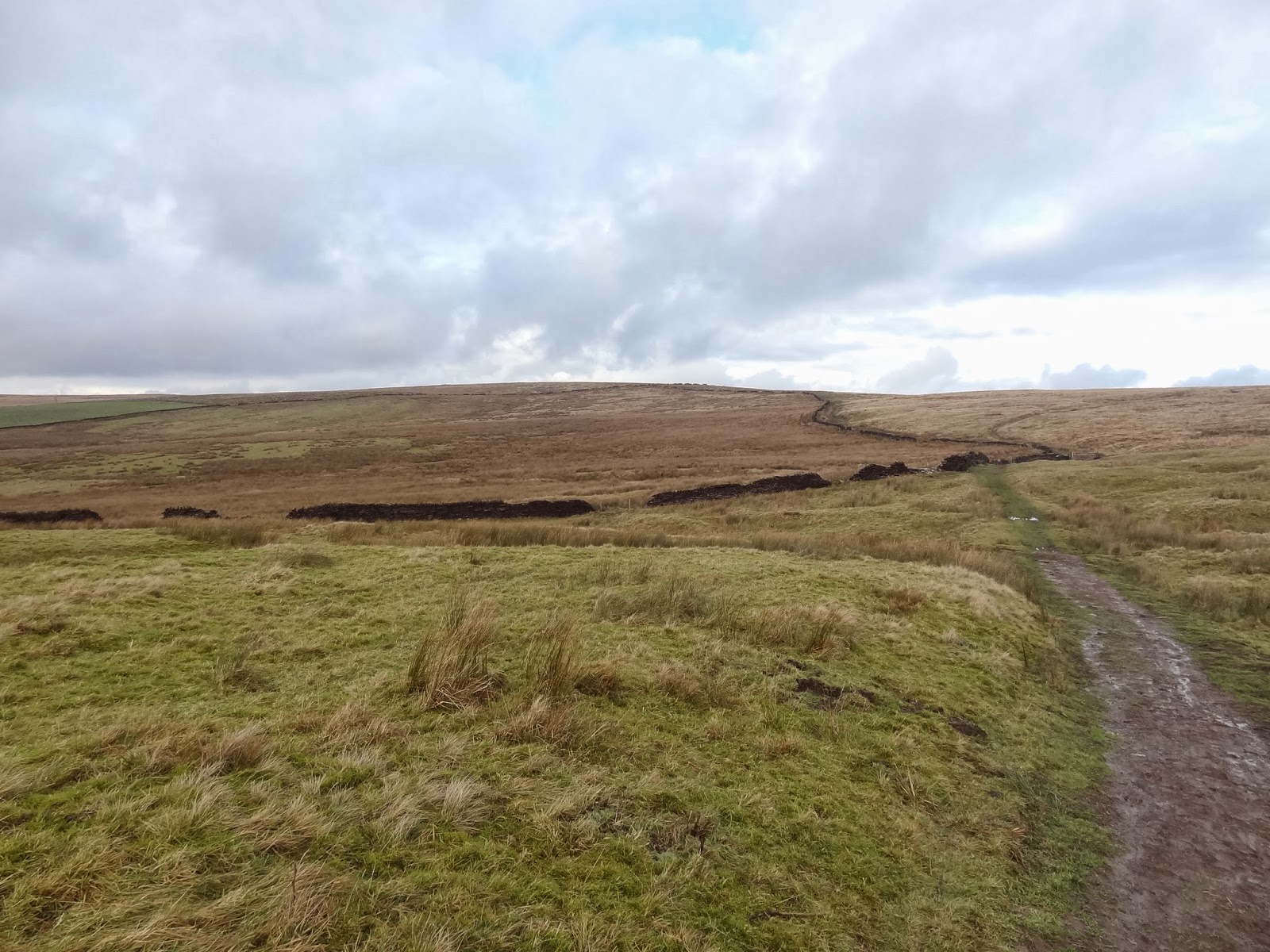 The view South east along the Burnley Way 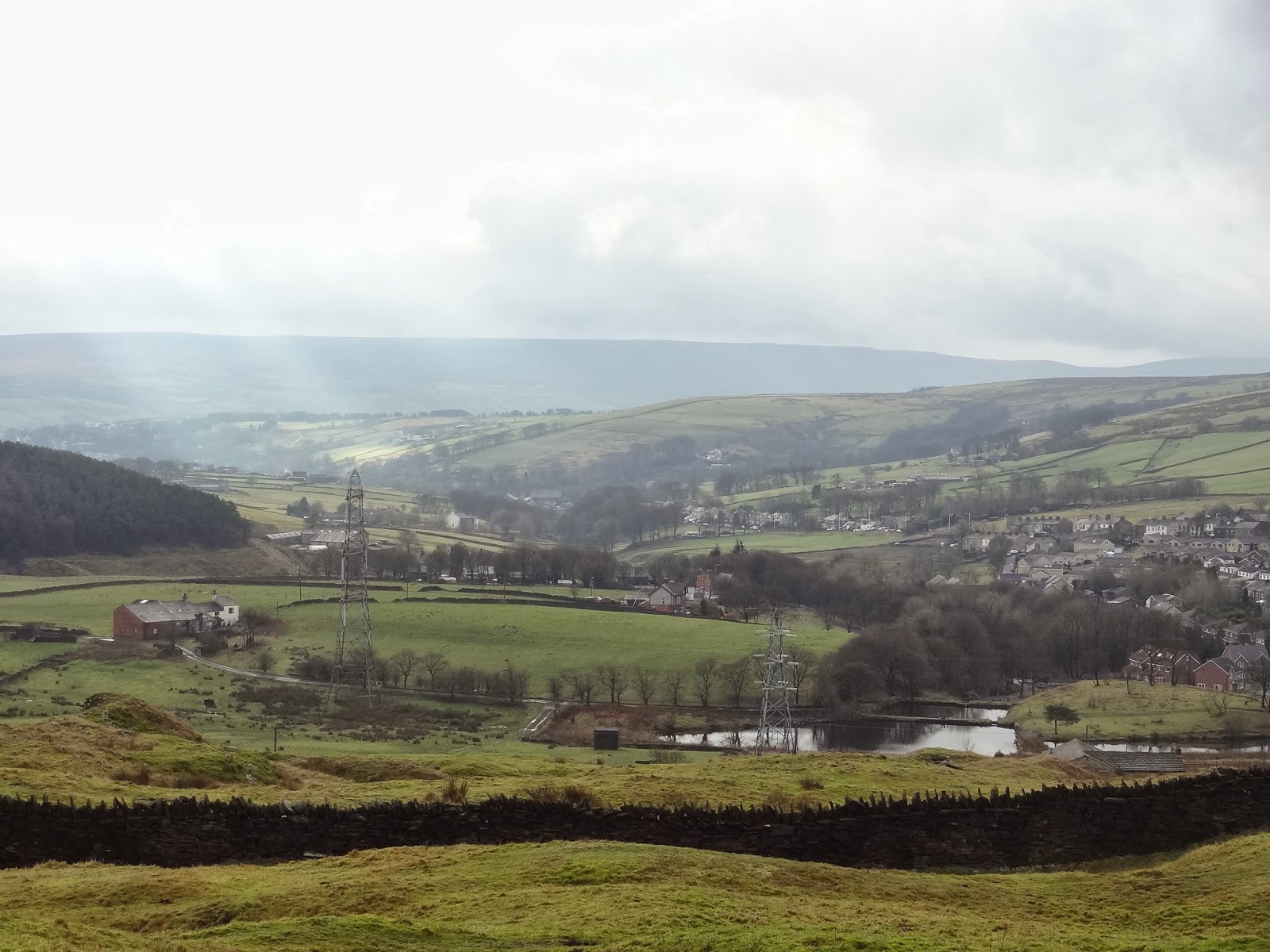 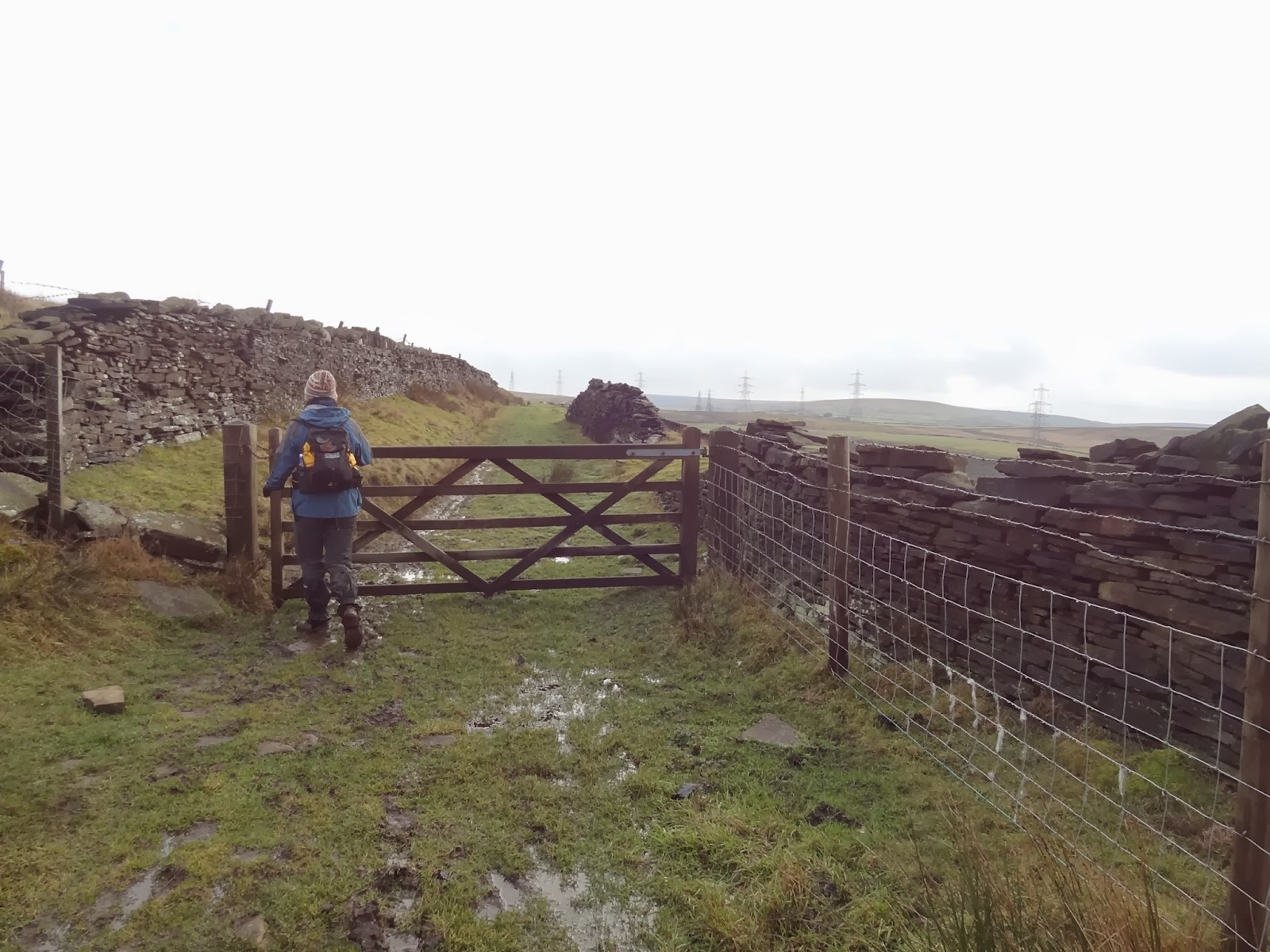 As we dropped lower down the temperature dropped with it. We ended up having to put our shell jackets back on. By the time we reached the car it was indeed chilly and our breath was visible. There must have been a temperature inversion as it wasn’t this cold on the tops. 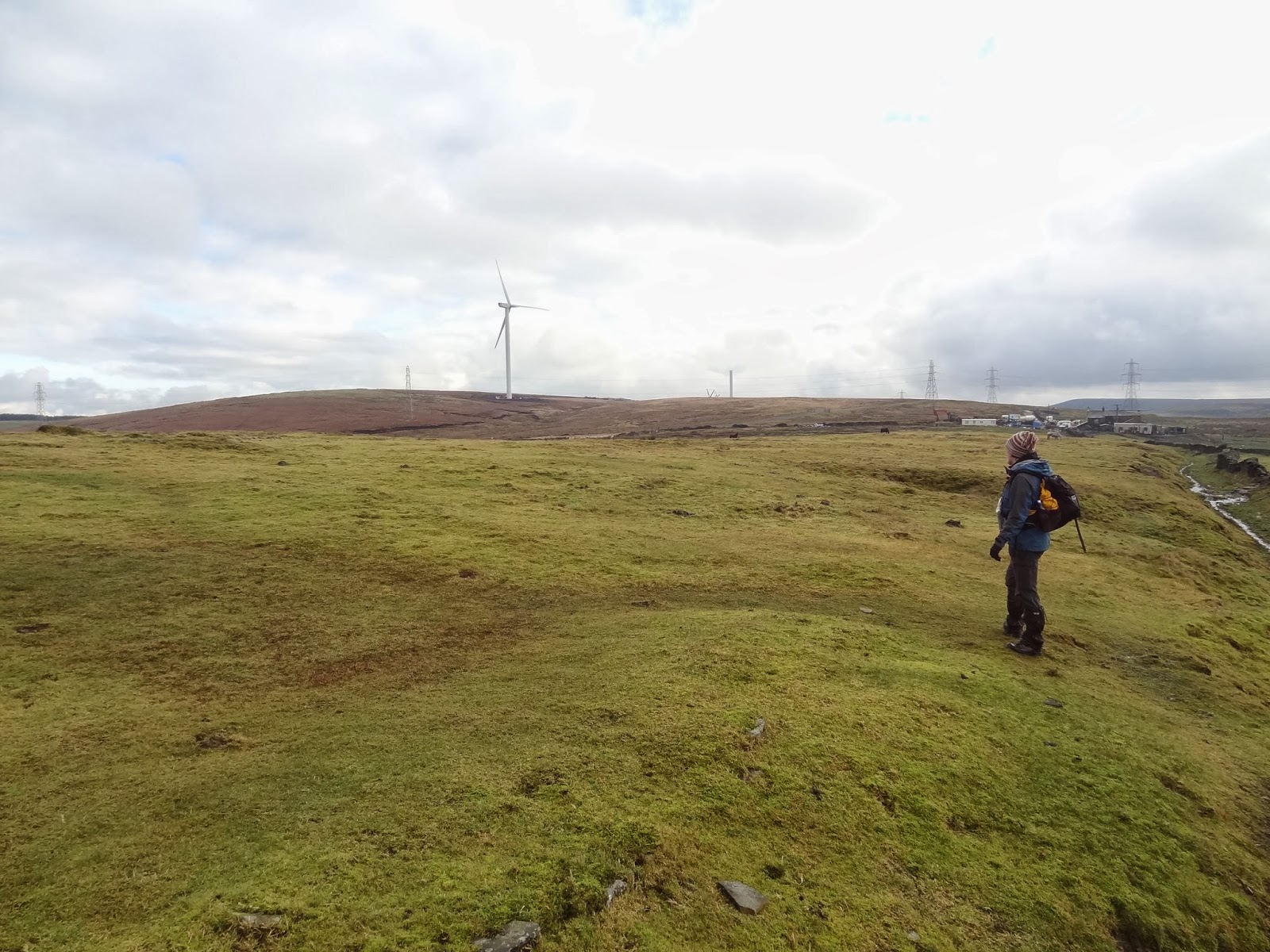 The last mile through Heald Top Farm. Farm has to be a loose description. Absolute dump is nearer the truth.
So, the route was 11.6 km long and Naismith says it should take a little over 3 hours. Well it took us over 4 1/2 hours. We only had a 15 minute stop but this was unknown territory and therefore many stops to look at the map and to take photo’s accounts for the disprepancy. It’s a grand walk.

Thanks Conrad. I'm pleased with the pics, it wasn't until I got back home that I realised I had the quality setting and the image size as low as it went. I forgot to change it back from a previous day.
It sure is a nice area, plenty of up's and downs to get the knees working.

That look like nice country Alan. Possibly a few spots for a wild camp or two?

Hi Dawn, Its very nice country and I will be doing some more of it asap. Some WC spots can definitely be found.

Looks like a good walk. Over 10k walks both Sat + Sun, lucky you (and it means you have recovered well!).

Oh, I know the feeling when all you want to do in the morning is to pull the sheets over your head... I experience it almost every morning November - February...

Hi Maria,
It has been a good weekend. We had some reasonable weather but its not going to last unfortunately. I'm not an early riser anymore if I don't need to. I had long enough getting up for work everyday at 5.45am..

Hi Alan. Nice wide open country that. Squelching seems to be the norm almost everywhere at present. As Conrad says, the photos are good.

Thanks Gibson.
It was another glorious sunrise today. Hope you got it too so that you could try out the new camera.

Is it dog free going through Heald Top Farm ?

It sure is a mighty big blot on the landscape... shouldn’t Rossendale Council take a look ?

Anon, sorry I cannot remember big dogs, it’s too long ago. If we had been accosted I think I would have flagged it up. Maybe Rossendale council should take a look at the place.