I really enjoy the rain.

An email dropped in the inbox from fellow blogger Martin B with his evening walks schedule for the rest of 2014. He’s so well organised isn’t he.
I hadn’t been out for a walk for 11 days since my knee stiffened up. I don’t usually have knee problems so it was a bit of a strange ‘un as i had done nothing to cause it.
I eventually went to the docs to have him give an opinion. He said the tendon holding the top of the kneecap is swollen and preventing the kneecap from sliding which in turn is causing the knee to stiffen. He drew me a nice picture.
He said take these anti inflammatories and these other tablets to settle your stomach. Why? whats wrong with my stomach i asked. He said that the anti inflammatories  may cause stomach bleeding and so these others will settle it. Mmm i thought.
Anyway’s, i took them, having read all the side effects, OMG, and after 5 days at the first sign of passing a bit of blood i decided to stop taking them. Sore knee or passing blood? Sore knee wins hands down.
But, as it happens my knee has settled down miraculously and although the doc said it could take 3 weeks or even more to improve, i seem to be absolutely fine.

So getting back to Martins email. This list of walks gave me itchy feet. I needed to get out raining or not.

I grabbed my summer weight overtrousers and my Carn boots along with a shell top and a new pair of gloves. Dressed accordingly i set off. I wasn’t going to go far and limited my first outing to a local 2 hours or so just in case i had a relapse.

After 20 minutes i thought, These boots feel a bit weird today. I did have a new pair of Bridgedale socks on but they shouldn’t feel as weird as they did. I checked the lacing and then it dawned on me. I had no footbeds in. What a *****. Anyway i carried on regardless.

The rain was quite heavy and it was blowing a bit too. I actually don’t mind walking in the rain, in fact i find it quite pleasant. The sounds and smells are somewhat different when its raining and also the paths are free of dog walkers. (Not that there is anything wrong with dog walkers). 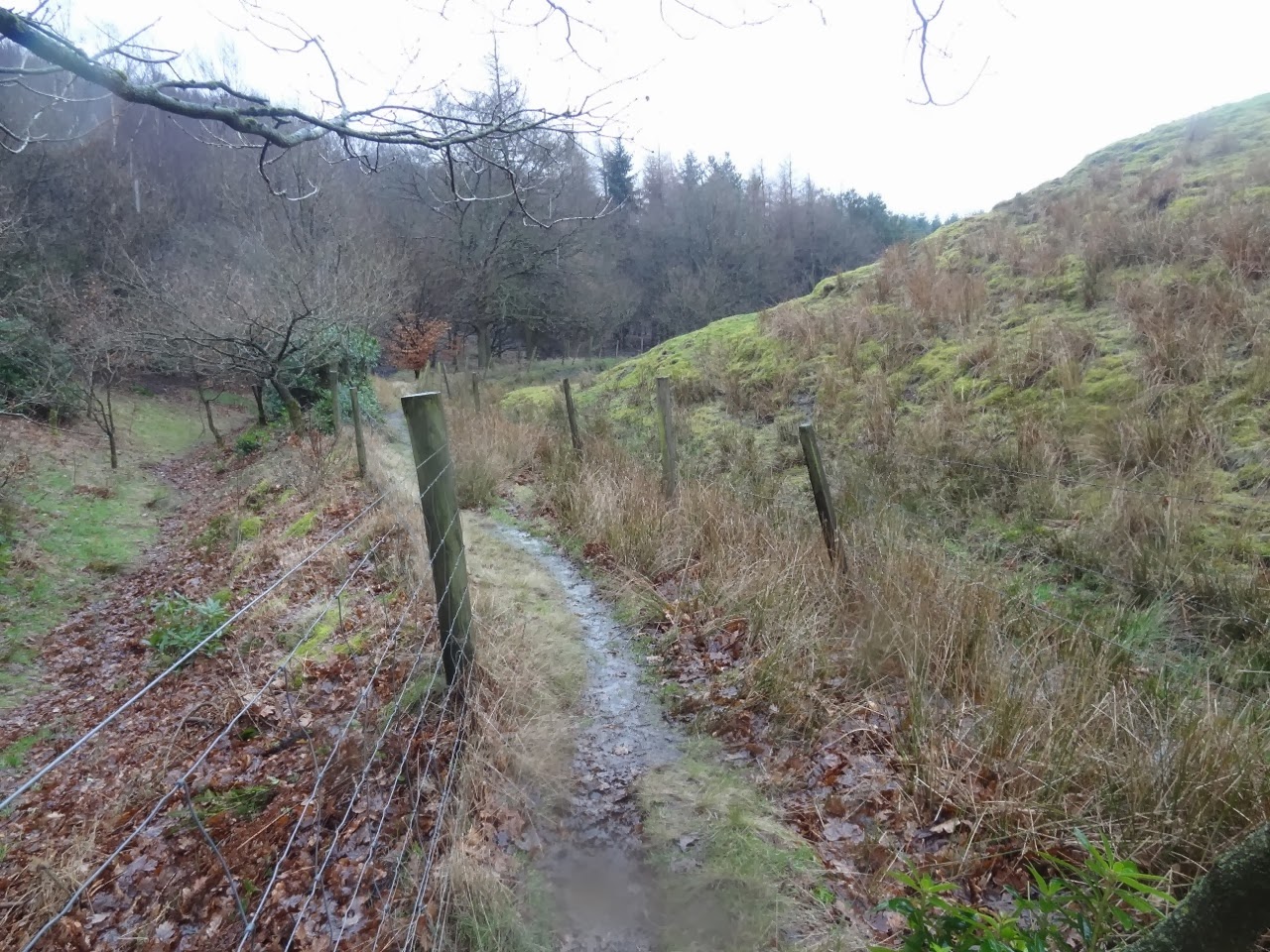 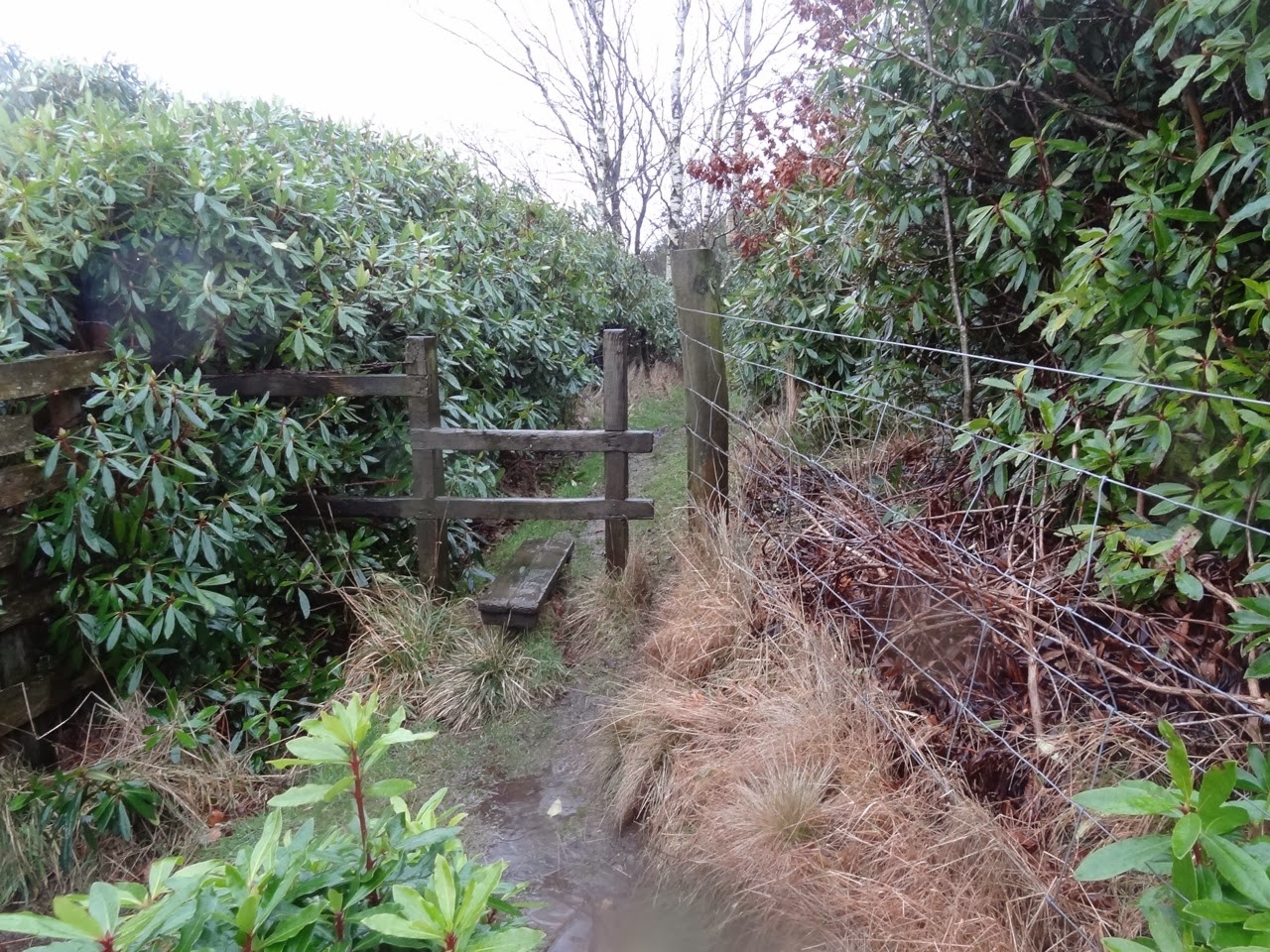 Underfoot it was glutenous for large sections and on one steep section i landed on my backside. My summer weight overtrousers not being able to cope with a drenching allowed plenty of water through and resulted in me being wet to the skin. Most unpleasant feeling.
Note to self. Don’t use Inov-8 - 190 overtrousers in the winter months. 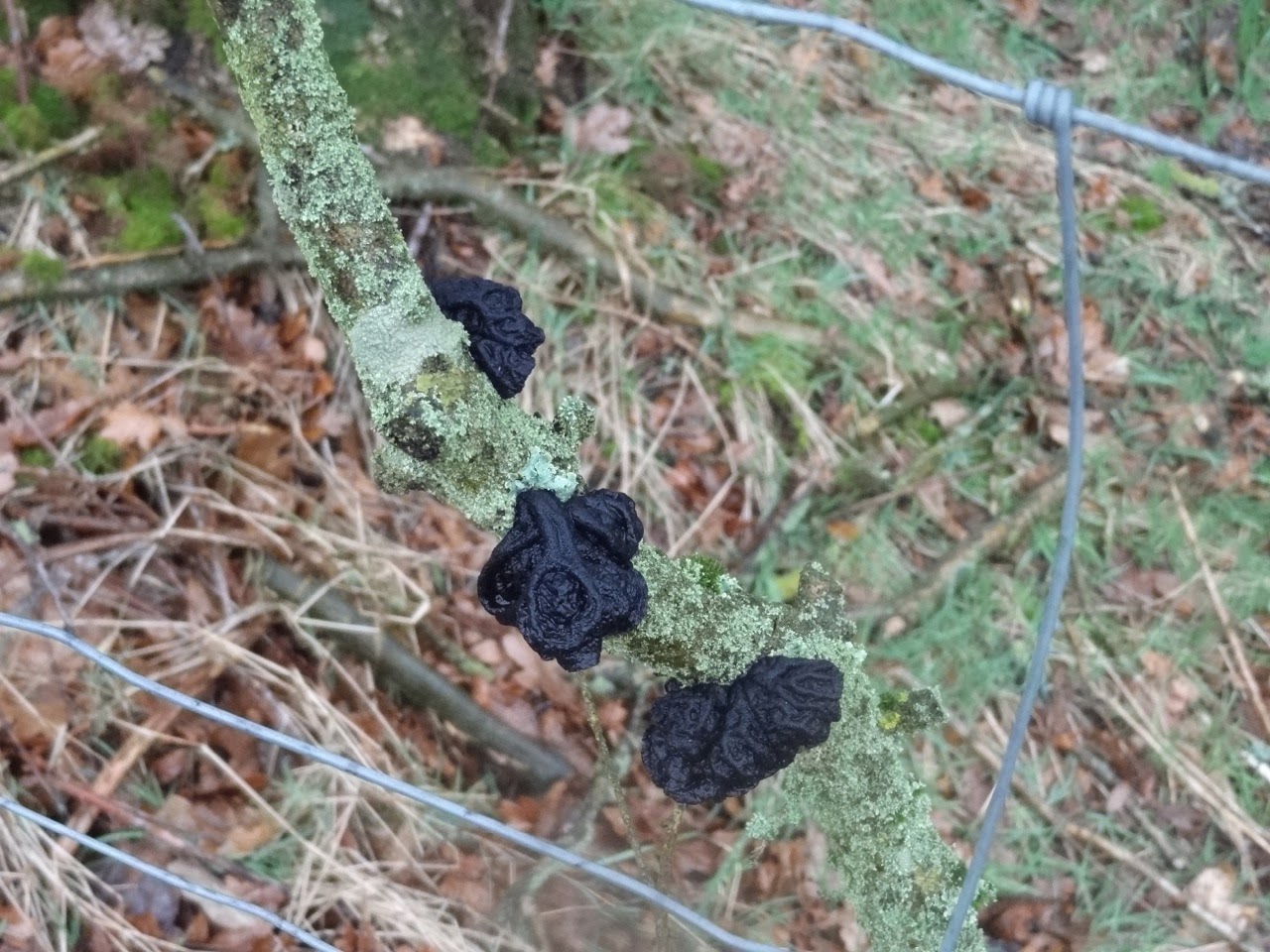 I came across this fungi. I have never seen these before but they look fantastic. No idea what they are called. 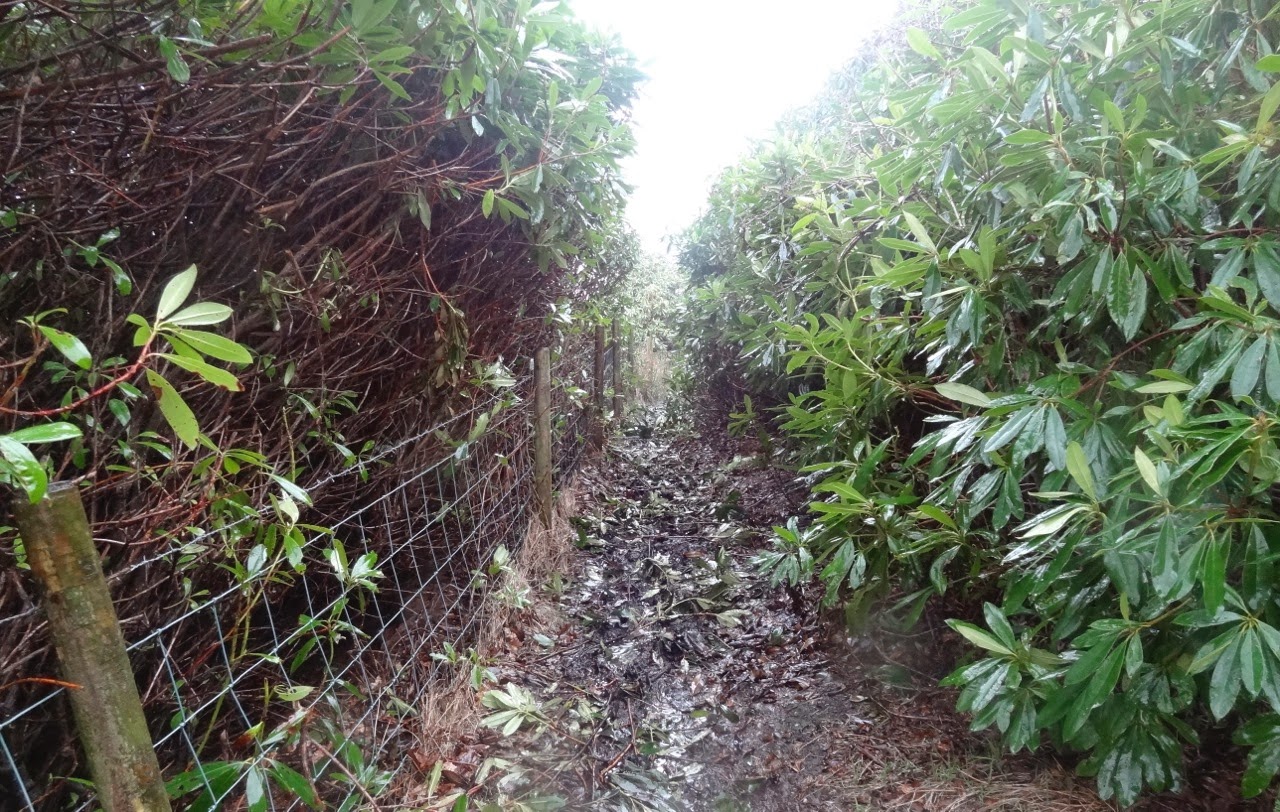 Just as i entered the Rhododendrons, picture above, i noticed quite deep puddles covered with trimmings. I carefully picked my way through watching the floor, when from the left hand side shot out a pair of screeching Jay’s. I almost ended up on the floor again. They were that close i felt the draft from their wings. They startled me. If you have ever heard Jay’s screech then multiply it by 10. It all happened literally within 3 feet from my head.

I managed to get through this soggy section without slipping and without catching my jacket on the barbed wire fence. 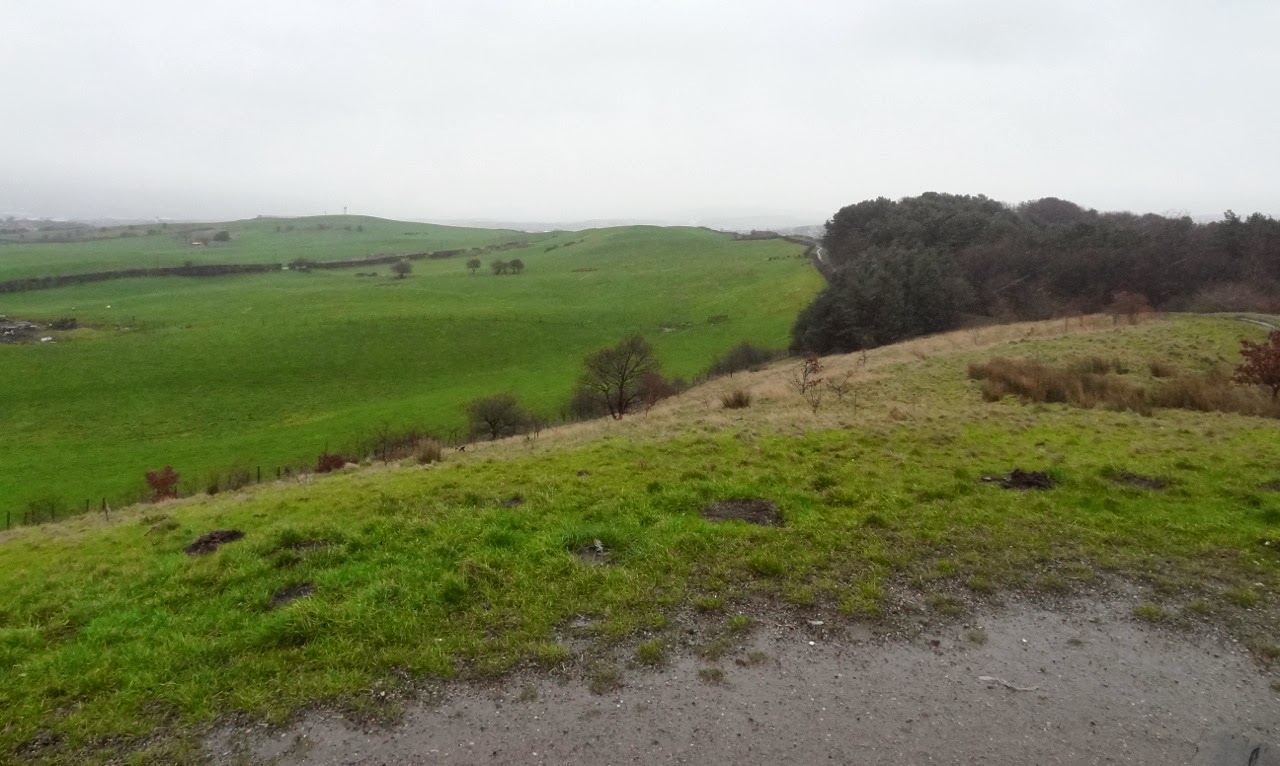 Just before reaching the trig point the rain came down very hard. The surrounding tops of the Pennines, usually clear were only shadows in a grey mist. 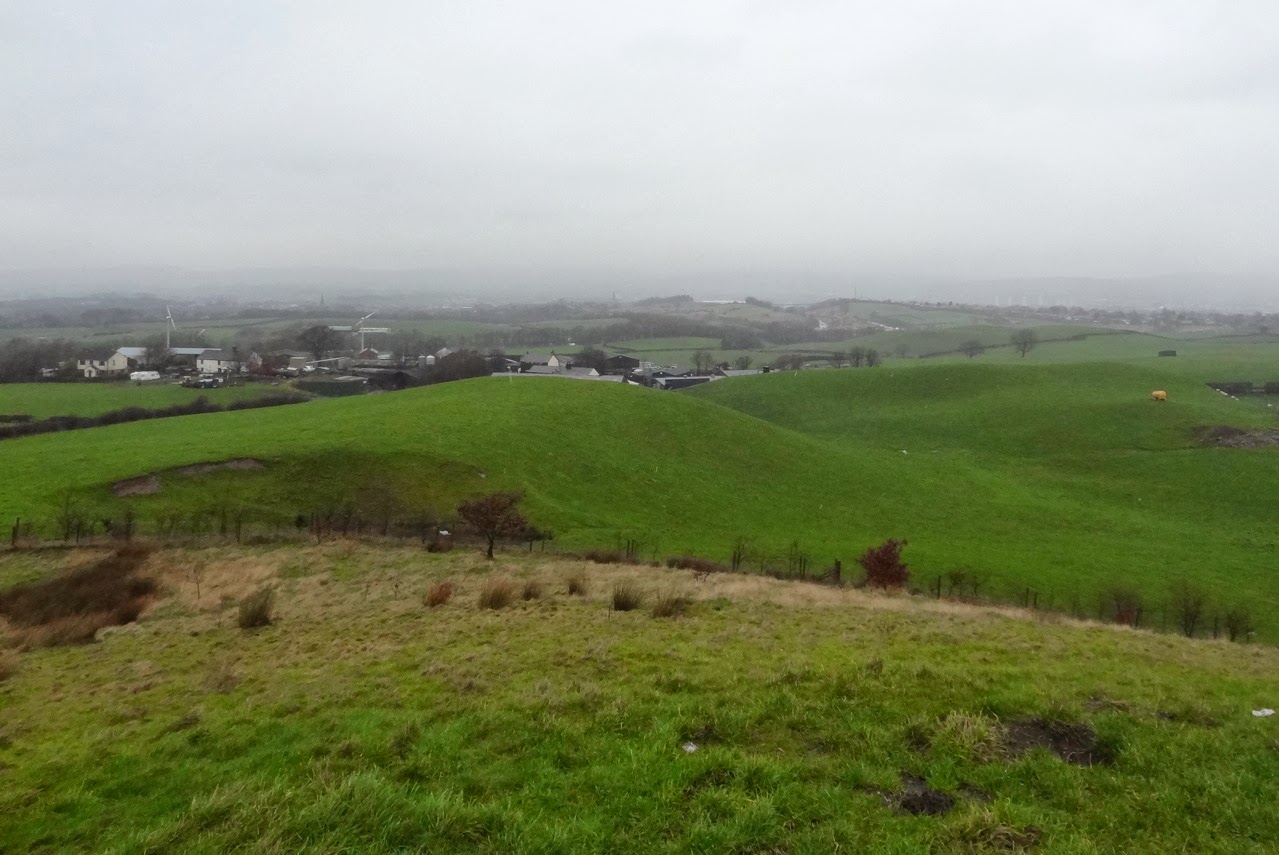 Winter hill is out there. 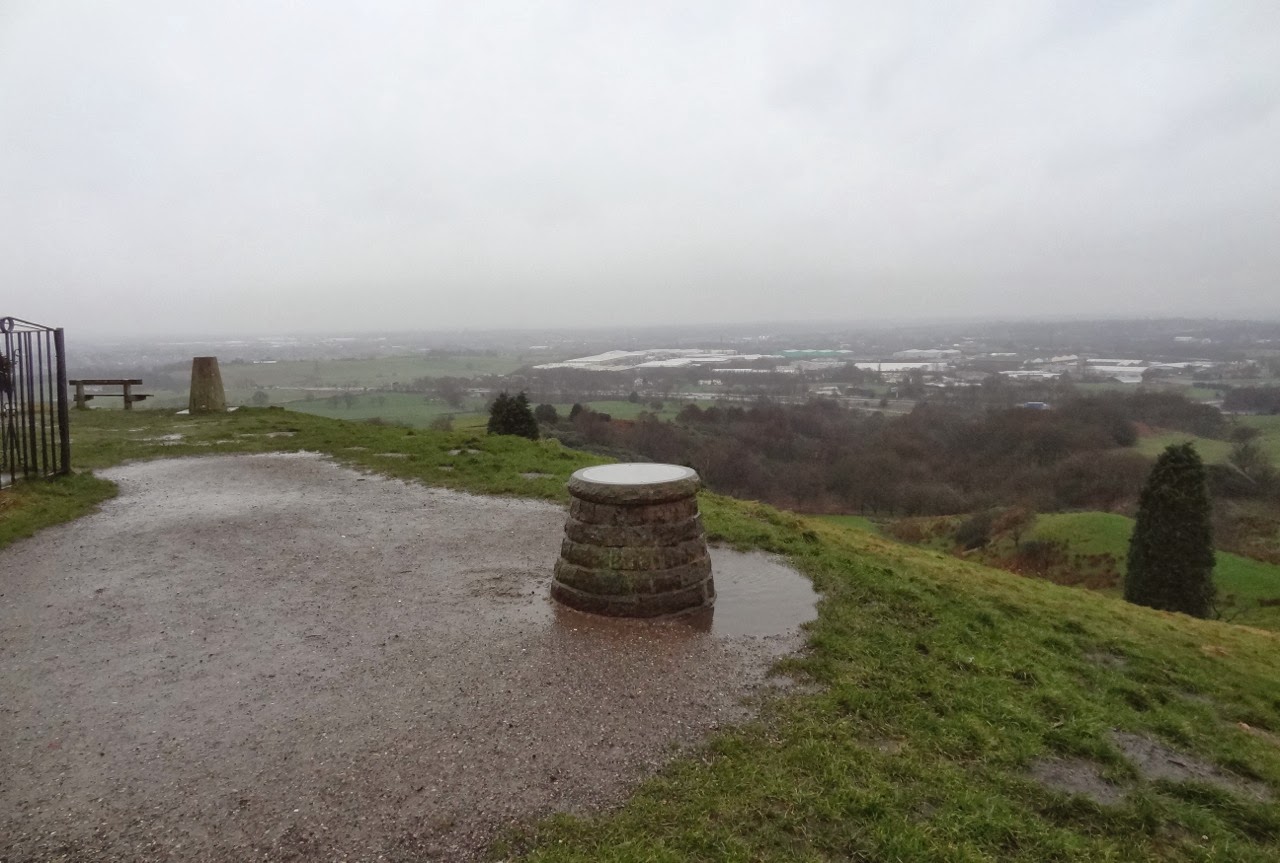 And in the grey murk lies Manchester City centre. I tried to take a timed photo but it was just too windy. It kept blowing the camera over and at one point had a chase down hill to recover my camera bag. 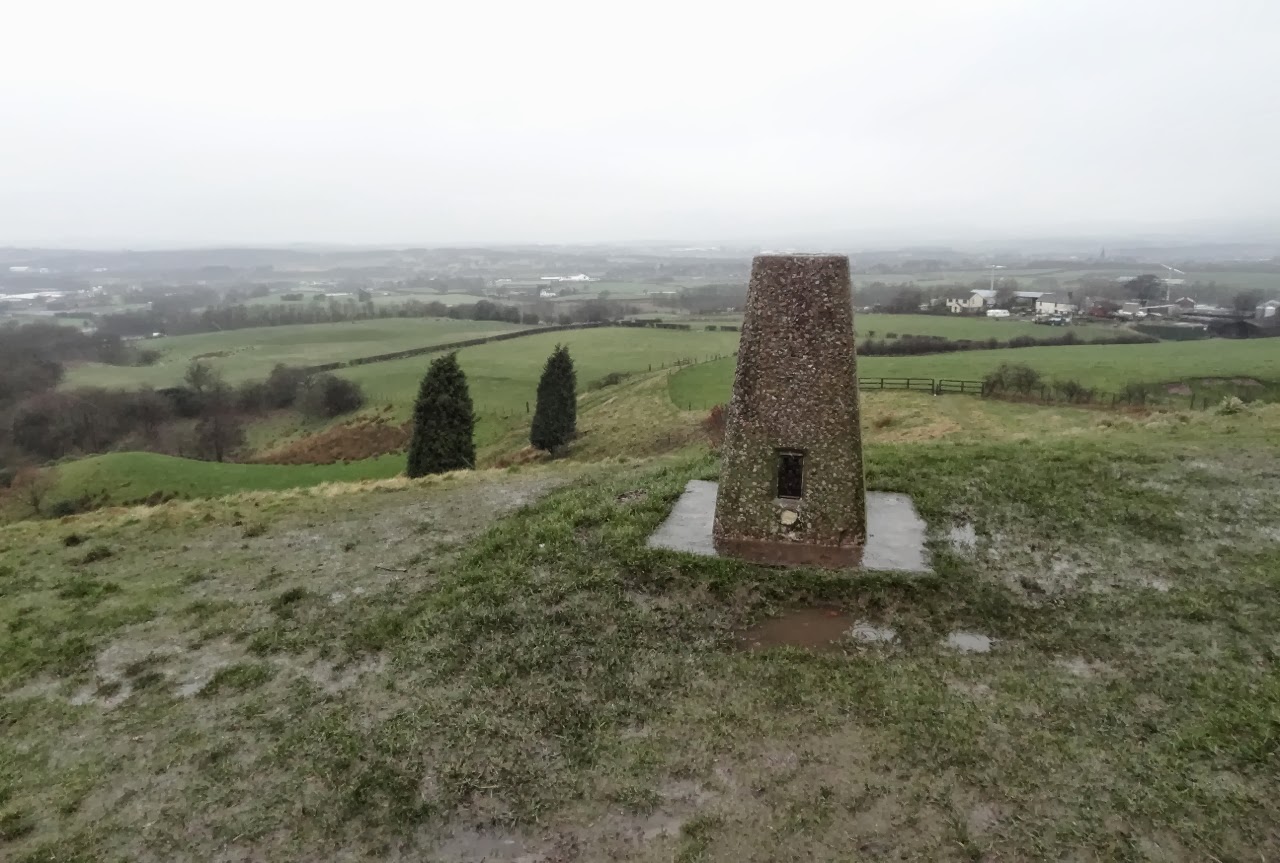 All in all i thoroughly enjoyed my short walk. No problems with the knee, fingers crossed. I was pleased with my new gloves which worked well even though they got socked when i fell over. I will do a separate post on them.
By the time i got back home it was still raining heavily and my trousers looked like i had never worn overtrousers. But it didn’t matter today.
Thanks Martin for sending the email, it spurred me to get out.

That fungi looks like two halves of the non performing over trousers torn apart in a pique and discarded along the way, but then I'm sure you wouldn't be one to scatter litter.

Shucks. Caught in the act! Ha.

Well done on getting out. Looks slaistery, wet and mucky. Taking meds is always a tad scary. Mine have just been increased,the leaflets warns of possible dire side affects. The parkinson's specialist has warned me of a strong chance of impulsive behaviour?? Yay, I shall become a radical wrinkly!!!!!!!!!!!!

Good word that Slaistery Dawn. Never come across it before. I had to look up what it meant. You will have to channel that impulsive behaviour into hiking.

I’m not good at taking pills and especially when i read the side effects. Take a look at the link. Its frighteningly long. http://www.drugs.com/sfx/naproxen-side-effects.html

Thanks Louise you are a star. From your suggestions I will see if I can narrow it down and then I will add it to the post. Cheers.

How is it possible to have a schedule for evening walks for the rest of the year? It's good there are different kinds of people, I could never plan my life so well in advance!

Our green winter with rain is only a memory now, it's all white here.

Happy to hear the knee is ok.

Hi Maria, Martin does organise some great walks throughout the year. It's unfortunate that Sheila works late and that means we miss lots. He's very much driven by being out and about not just walking but mountain biking and running too. He published a book this year about his walk across the Pyrennes which is worth getting hold of if you fancy getting a copy. Check out his website Postcard from Timperley. He has the grand accolade of having won an award for his route on the TGO Challenge and last no mean feat.
Yes. The knee is fine thanks. Been out today for our local 10k but did 12k just to make sure all was good.

Auld age doesn't come itself, right enough.
However.
I was in Tiso's in Stirling today with a technical question for the young assistant. (Damn. There goes my carefully cultivated gear-o-phobe reputation !) He flashed up the behind-the-counter computer and as the screen lit up there was the familiar title page of "Blog on the Landscape". Obviously they are using your blog for technical research - I hope you are getting a fee !!

You know it never ceases to amaze me just who reads our writing. But i find blogs far more honest than marketing blurb when it comes to gear. Walking posts of long or short hikes are just as interesting as what the outdoor mags release and many are inspirational.
Maybe they will like my next post coming up soon. If they are using my blog for tech research they must be desperate. Ha. But i’m pleased they find it fit to read. No money has changed hands. Guaranteed.

Good on you, Alan, for getting out, and for your enthusiasm re our evening walks. In response to Maria, these walks are fitted around other bigger trips that have to be planned well in advance to get cheap flights and companions, etc. They are an alternative to slumping on a settee, and planning them encourages us to actually attend them! Anyway, I see you have branched out with an innovative way of developing your pension fund to encompass a museum of sleeping mats and trousers. Personally, I think drying time can depend on the absorption qualities of the hand towel in which the trousers are repeatedly wrapped in order to dry them!
Have fun in the rain...
M

I think it’s more diminishing my pension fund Martin. For what its worth that is.
I didn’t actually buy this mat as i have the Exped UL7 full length and that will do me for now. But if i was looking to change mats i would seriously consider it as it’s well worth the money. I just thought i would pass on the info for others to check out.

Sue says "older people are more susceptible to gastrointestinal bleeding".
Mind you, I was on a hefty dose of Naproxen for my muscle problem in September and didn't notice (or even look for) any side effects.
That mat actually looks very good for the money. It might secure a prominent place in a few years time in your museum of outdoor equipment, entry to which will finally provide you with sufficient income to release Sheila from the workhouse. So perhaps you had better buy it!

And Sue should know. Ha.
I doubt people would pay to see my old gear. Ha again.