The weekend didn’t start too well. My fault, i packed the car up and we headed off, just as we hit Bradford area one of my brain cells kicked in asked “did you put your walking shoes in the boot”. Answer no, i left them in the porch.
So it meant i had to buy something to walk in that didn’t cost a great deal. I managed to pick up a pair of Saucony fell runners for £25, i was ok with that.
I had never been to Otley before, it has a nice river, The Wharfe, with a footpath along both banks. lots of interesting alley ways, corbled streets and squares, loads of pubs and cafe’s, a camp site and well, almost every other shop you can think of. 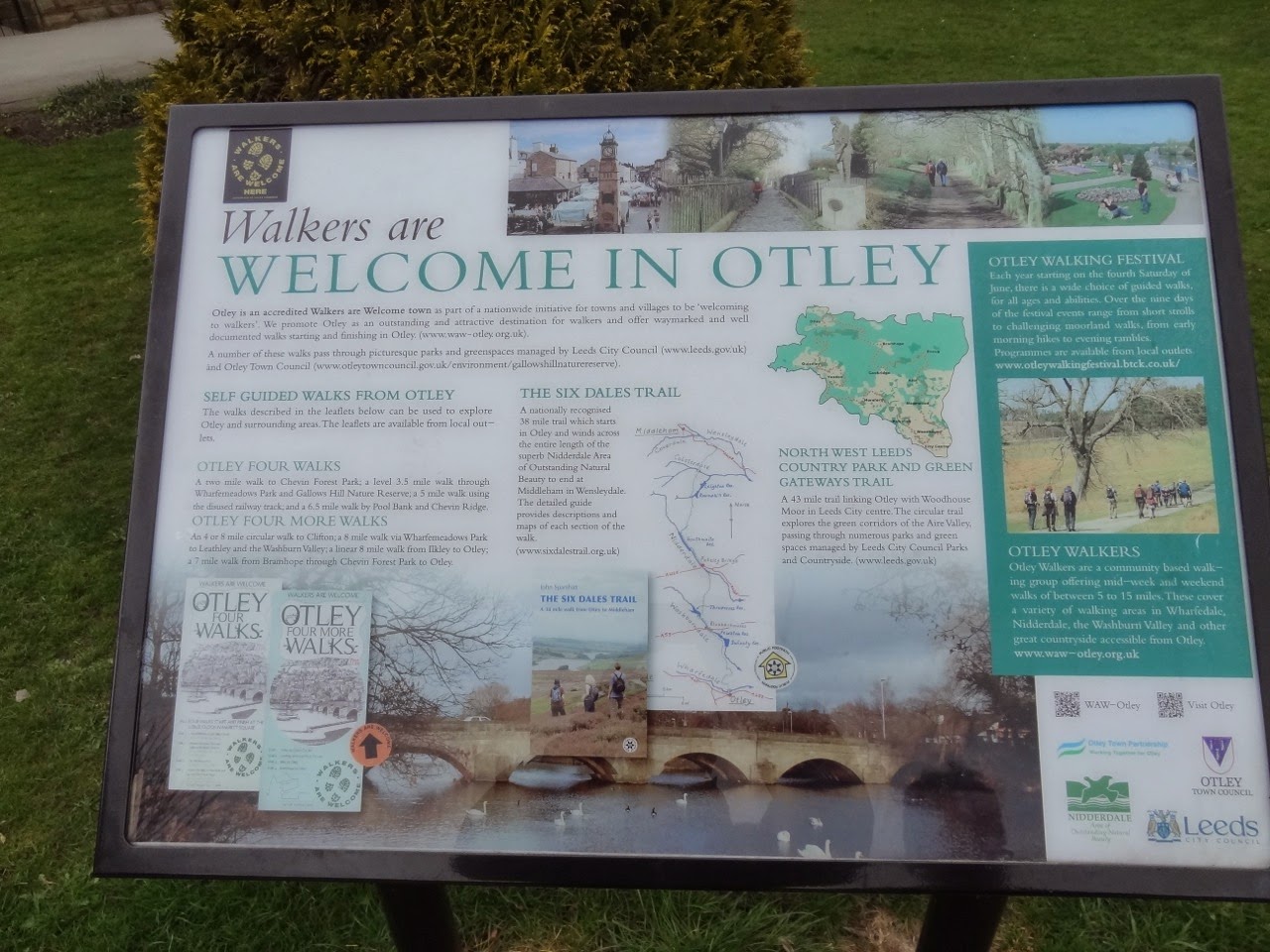 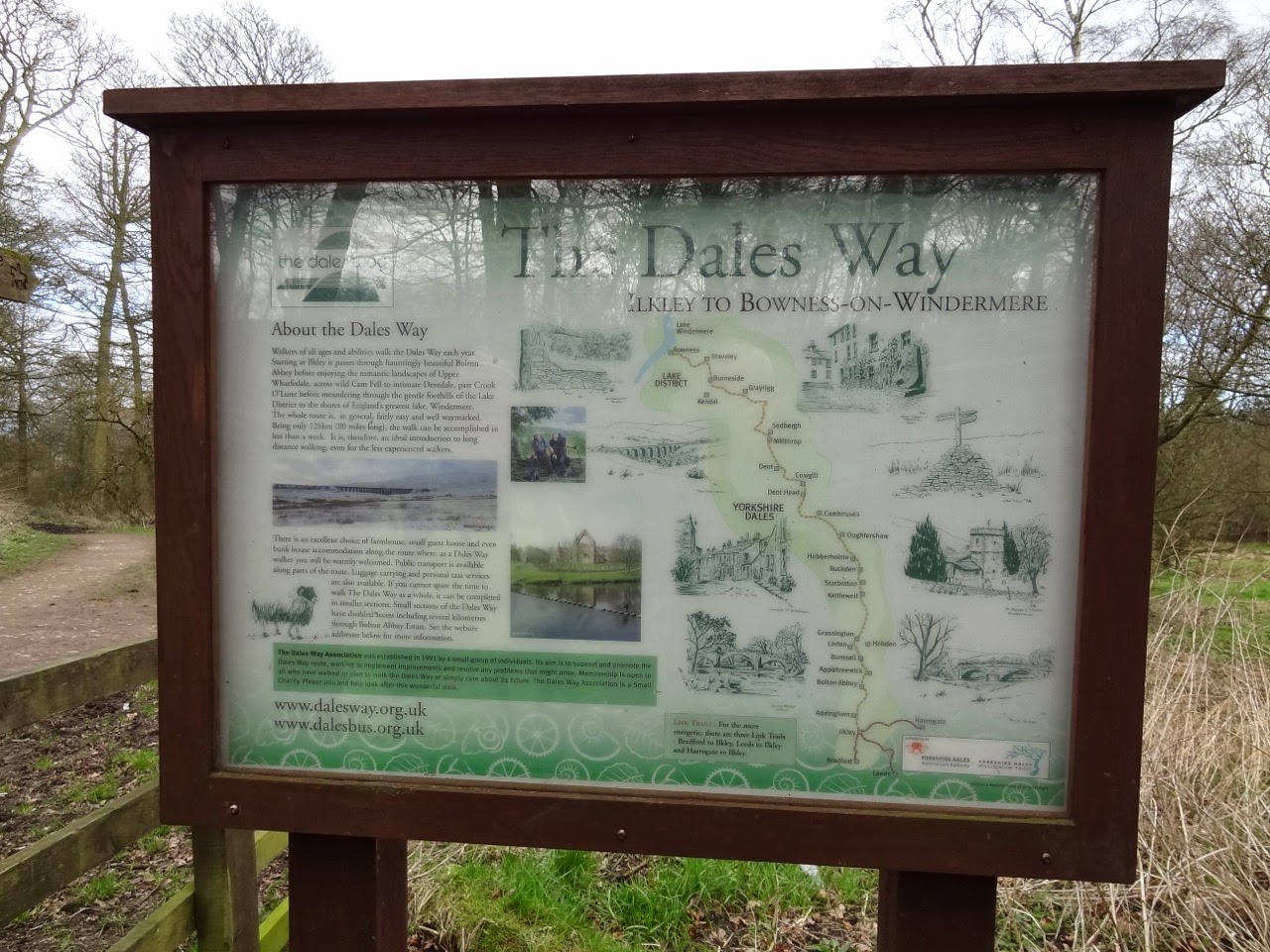 Many information boards can be found showing Otleys history and especially the paper and printing trades. Otley is also on a link route for the Dales Way. 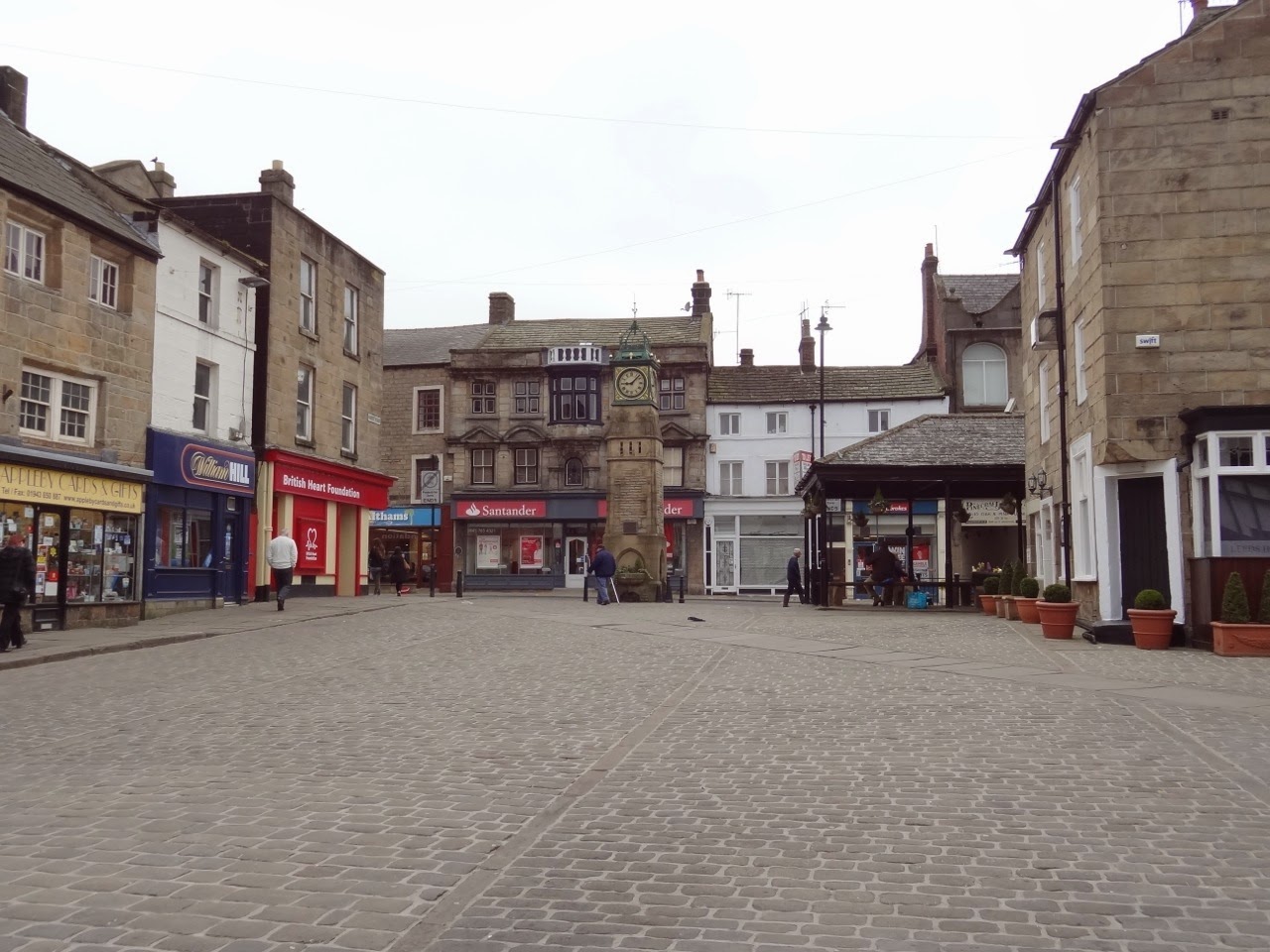 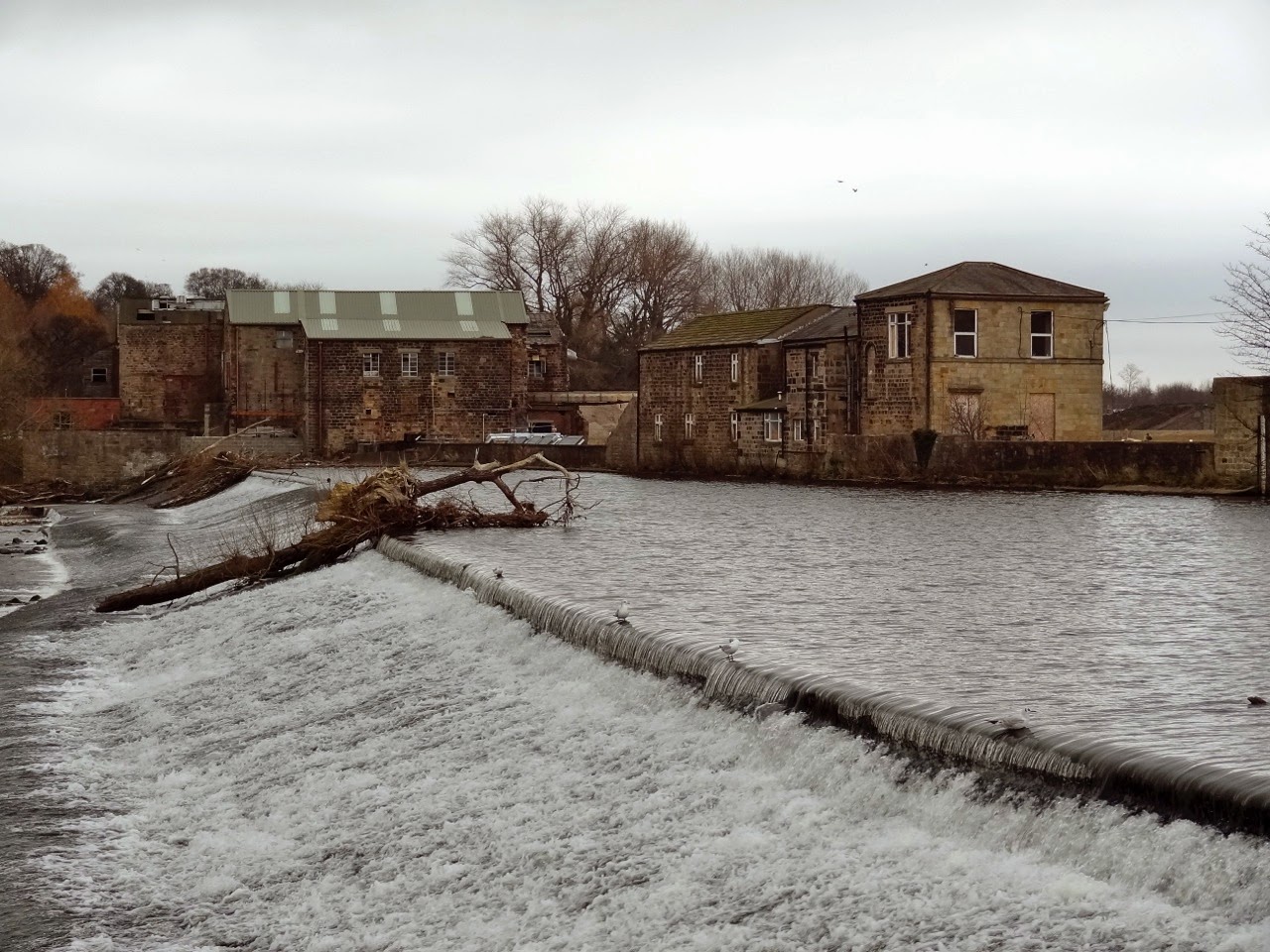 The River Wharfe with storm swept tree. The building behind is part of the old paper mill. Now demolished. These buildings have been Gr.2 listed and so have to be kept. Paper making in Otley goes back around 300 years.
Our plan for Saturday was to do some short walks along the Chevin Tops and basically just walk wherever paths went for as long as time allowed. Its a good idea not to have a fixed route some times.
It turned out to be a very nice day with great views but my it was windy.
The Chevin escarpment is really steep from Otley and although this wasn’t a problem we wanted a centrally located car park so that we didn’t have to use public transport.

We parked up at Surprise View car park across the road from the Royalty pub which has just re-opened after a couple of years closed. Grid Ref: SE 205 440. Wow it saved us some up’s. Many people were out with or without dogs and lots of runners were using the fine open ridge for exercise. The views were superb in all directions but it was a shame the wind was so fierce. 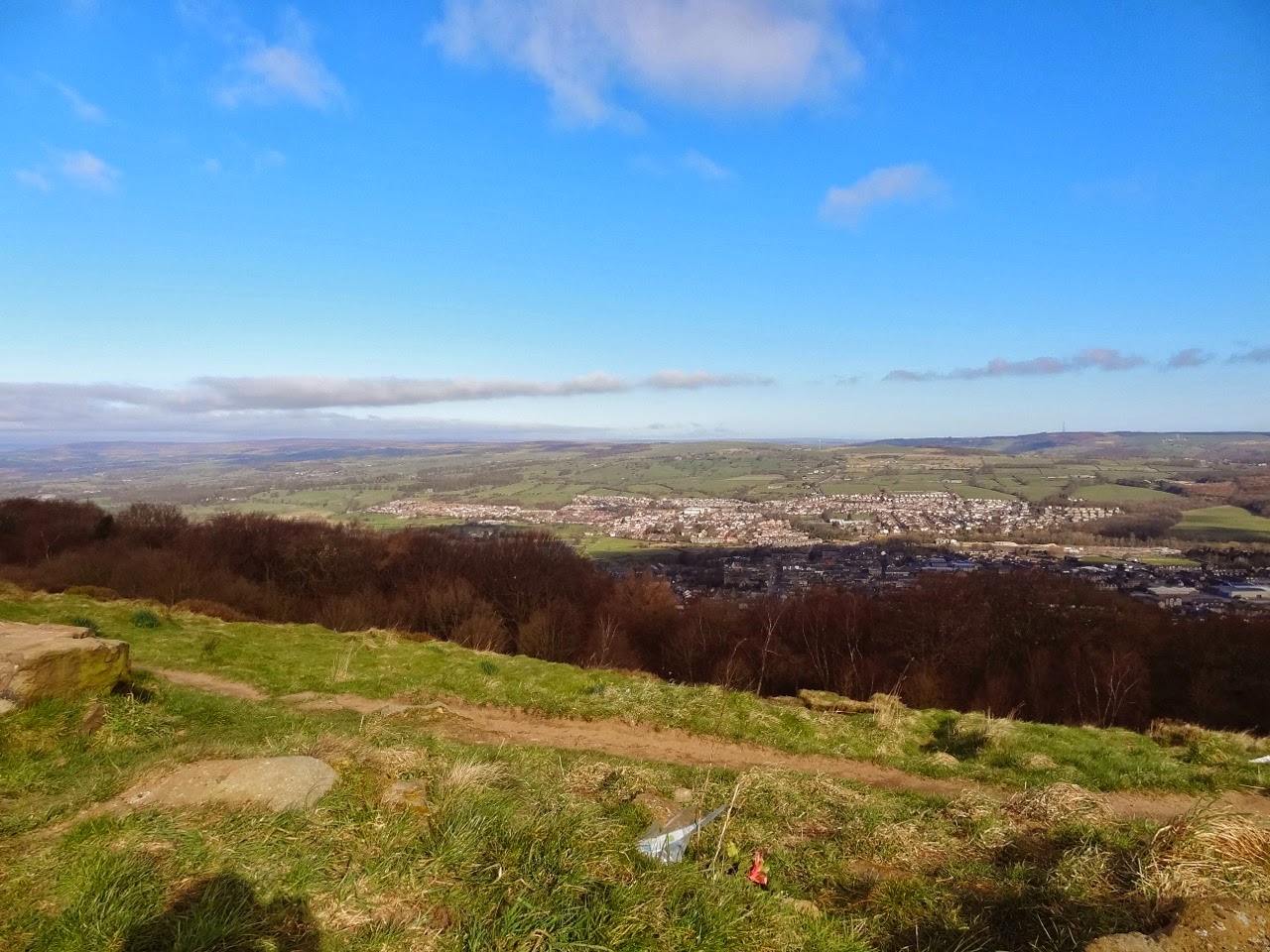 View from Chevin ridge across Otley and Wharfedale. 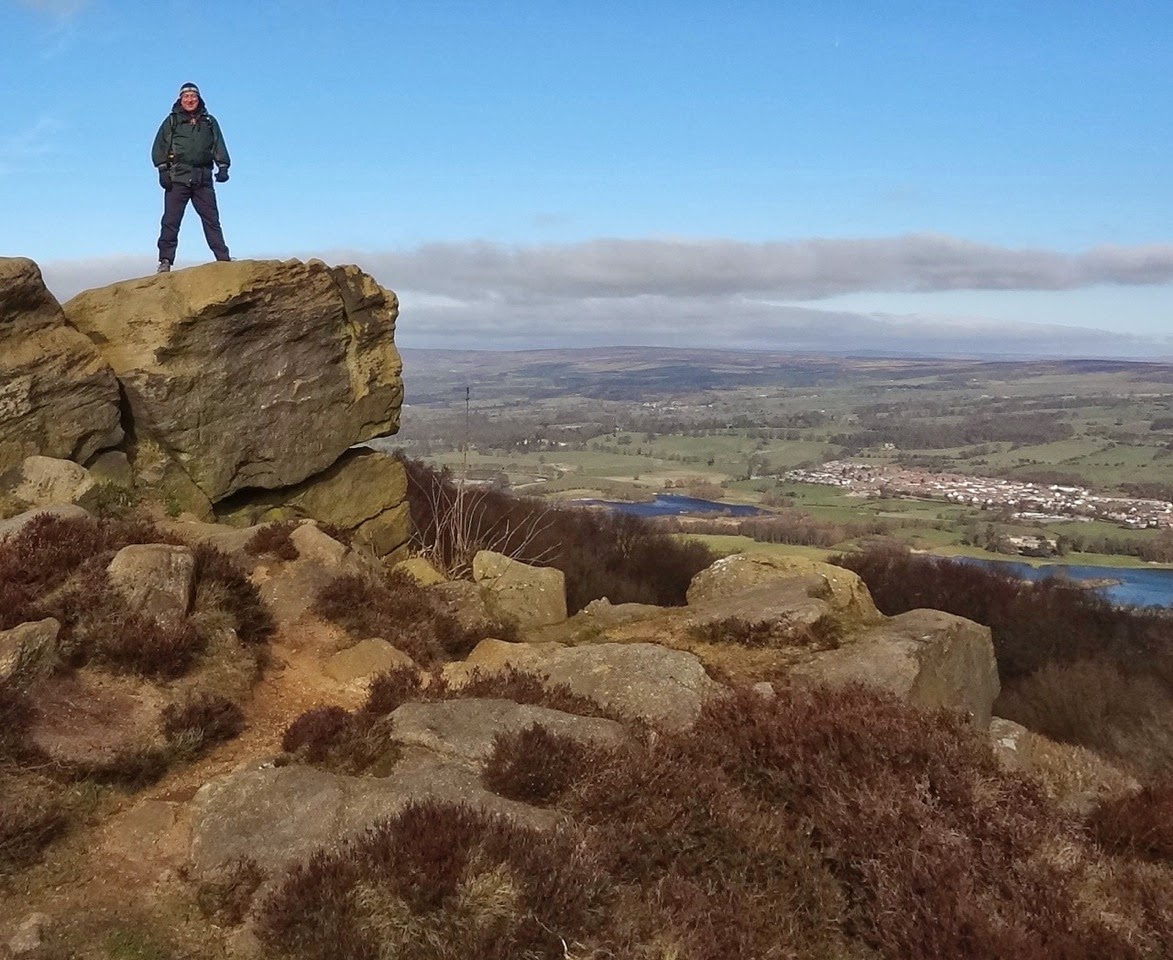 At the high point of 282 metres on the Dales Way and Ebor Way. 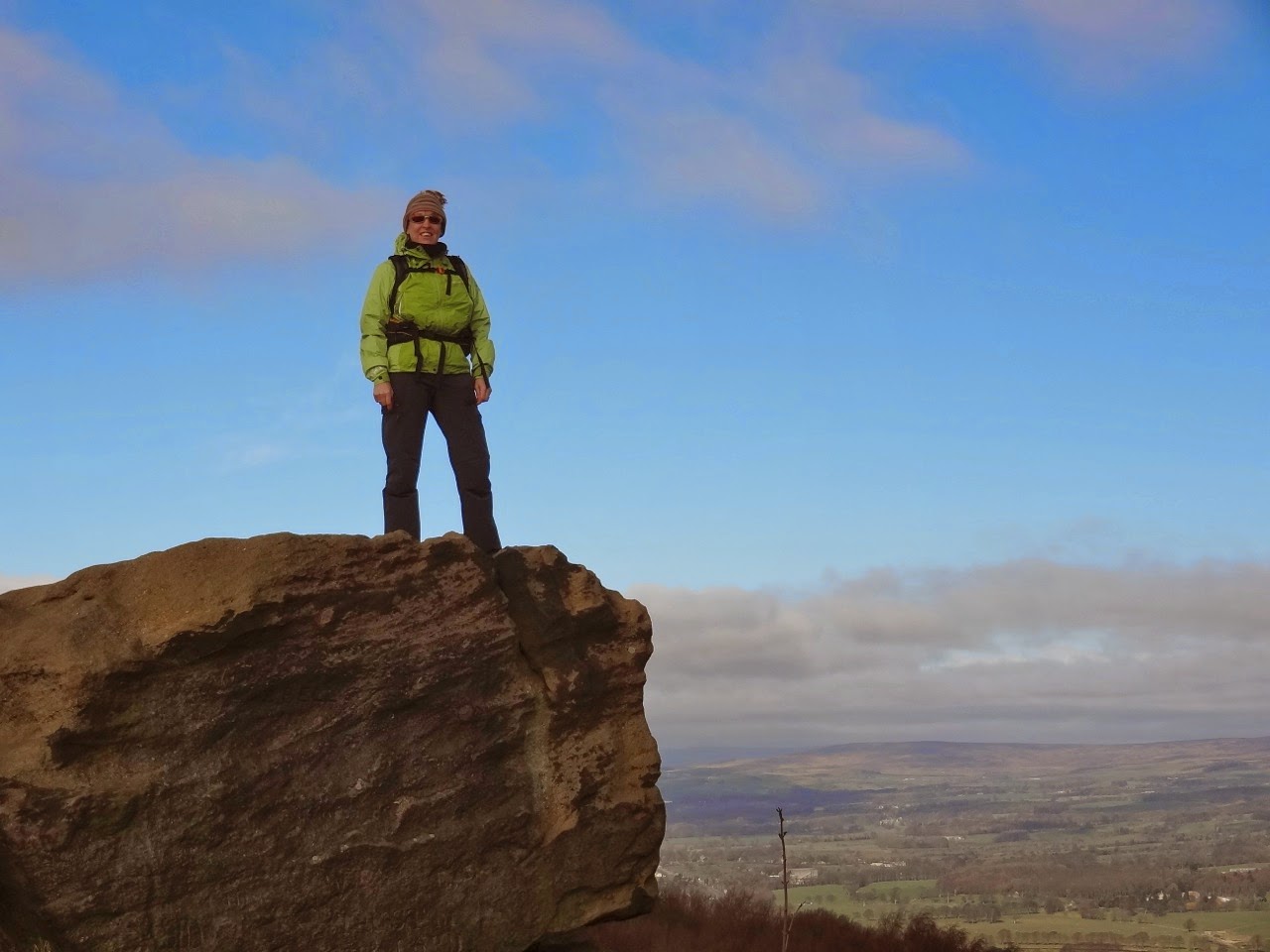 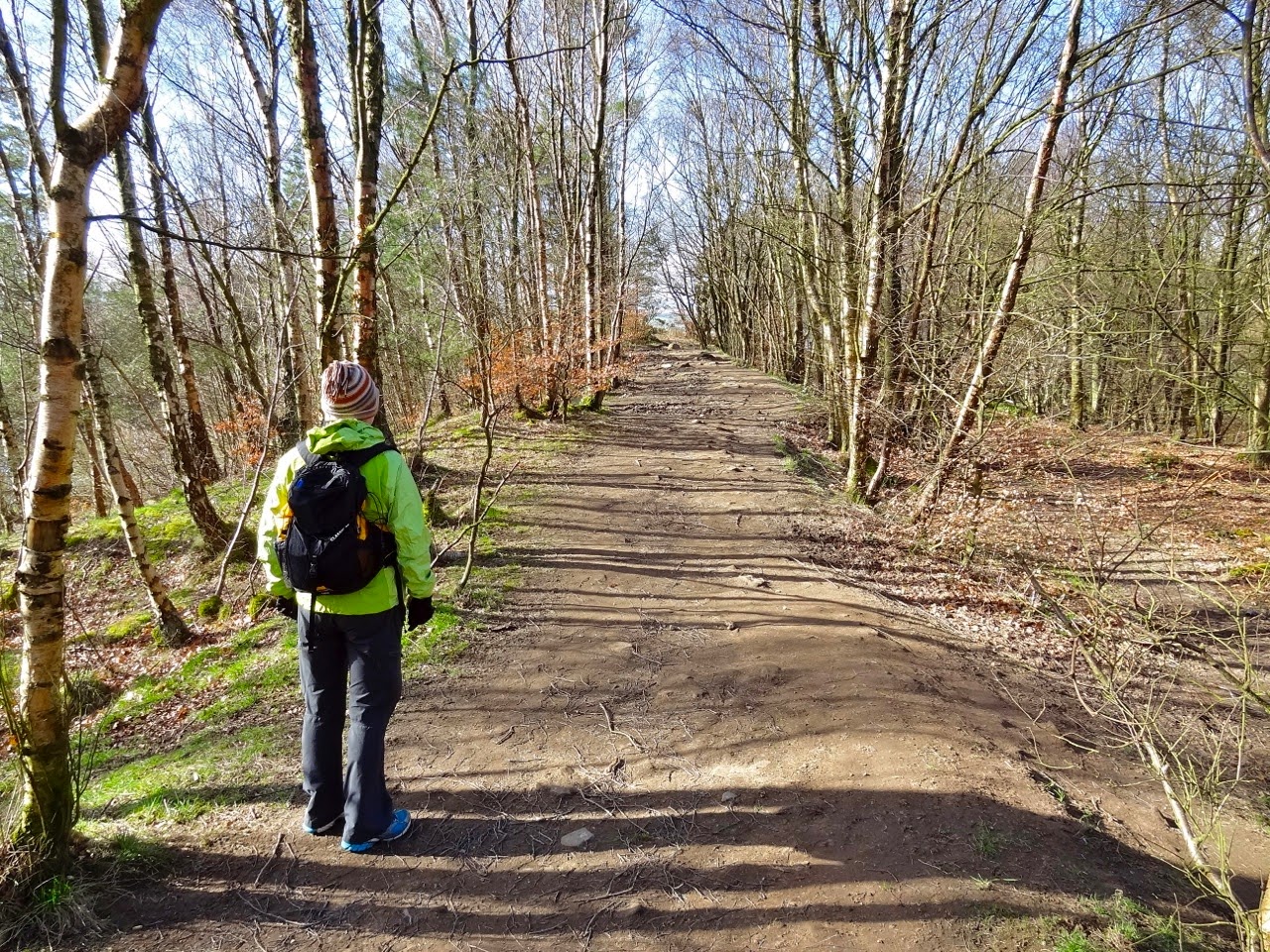 We headed off west in the direction of West Chevin Farm where we turned onto a lower path that skirted the ridge line. There were lots of paths that were not on the map and we had to be a bit careful because we didn’t want to loose too much height. Glaciation or the remnants of glaciation were everywhere with huge erratic boulders waiting to be inspected. 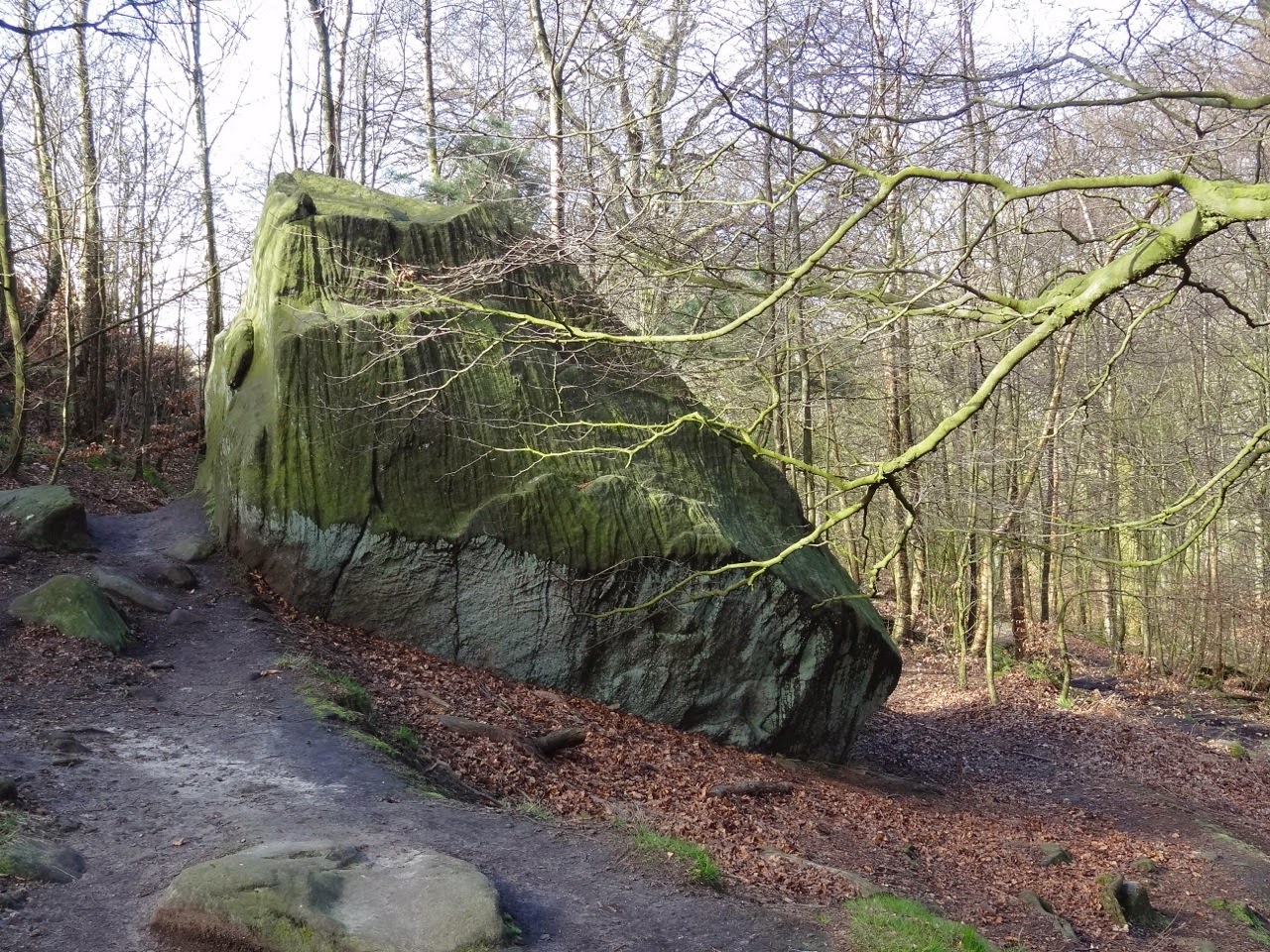 One of many erratic boulders 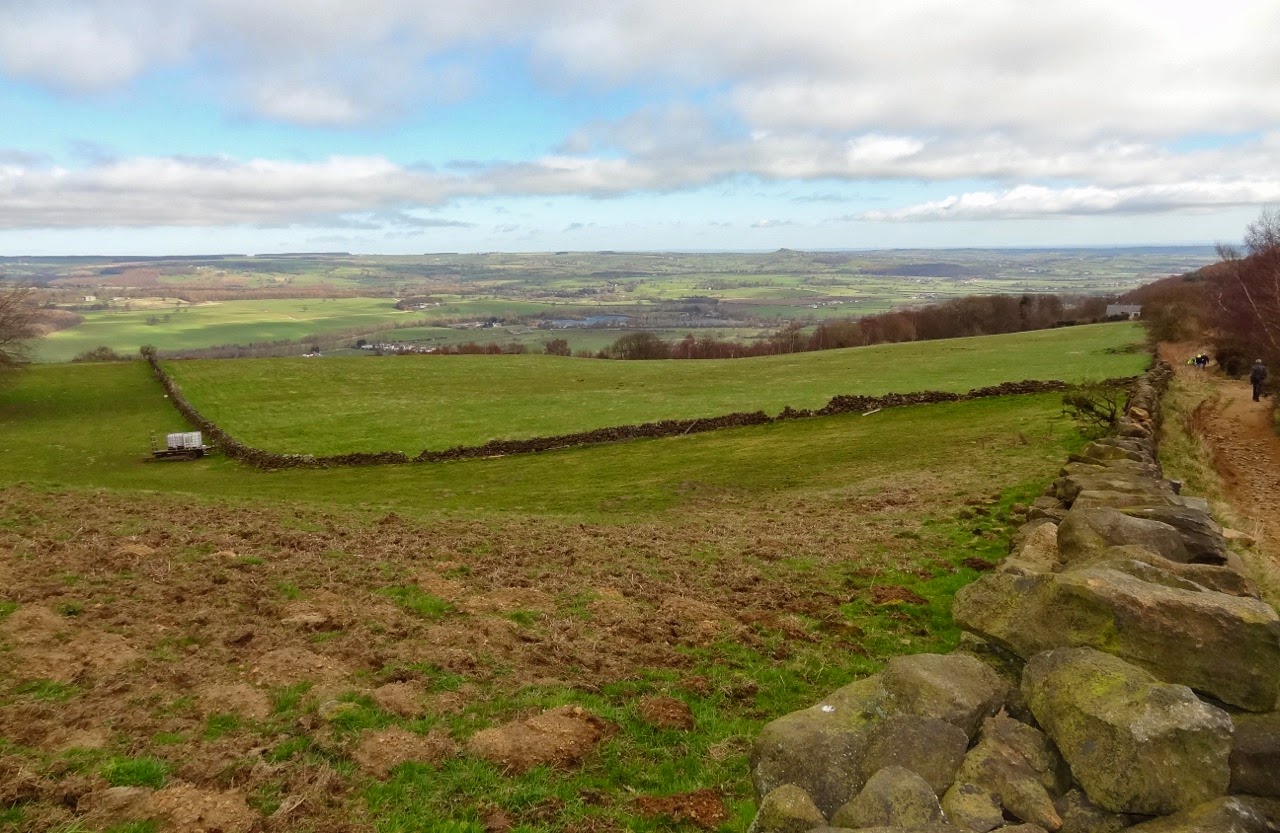 Following the escarpment now in an easterly direction it wasn’t long before all the tracks headed back up towards the ridge again and the wind was really getting strong. Sheila spotted a common lizard scurrying away and it disappeared into a crack way before i managed to get a photo.
Our route still with good views across to Almscliffe Crags and further towards Harrogate eventually became Millers Lane i think it was called and crossed the main road at Danefield House. 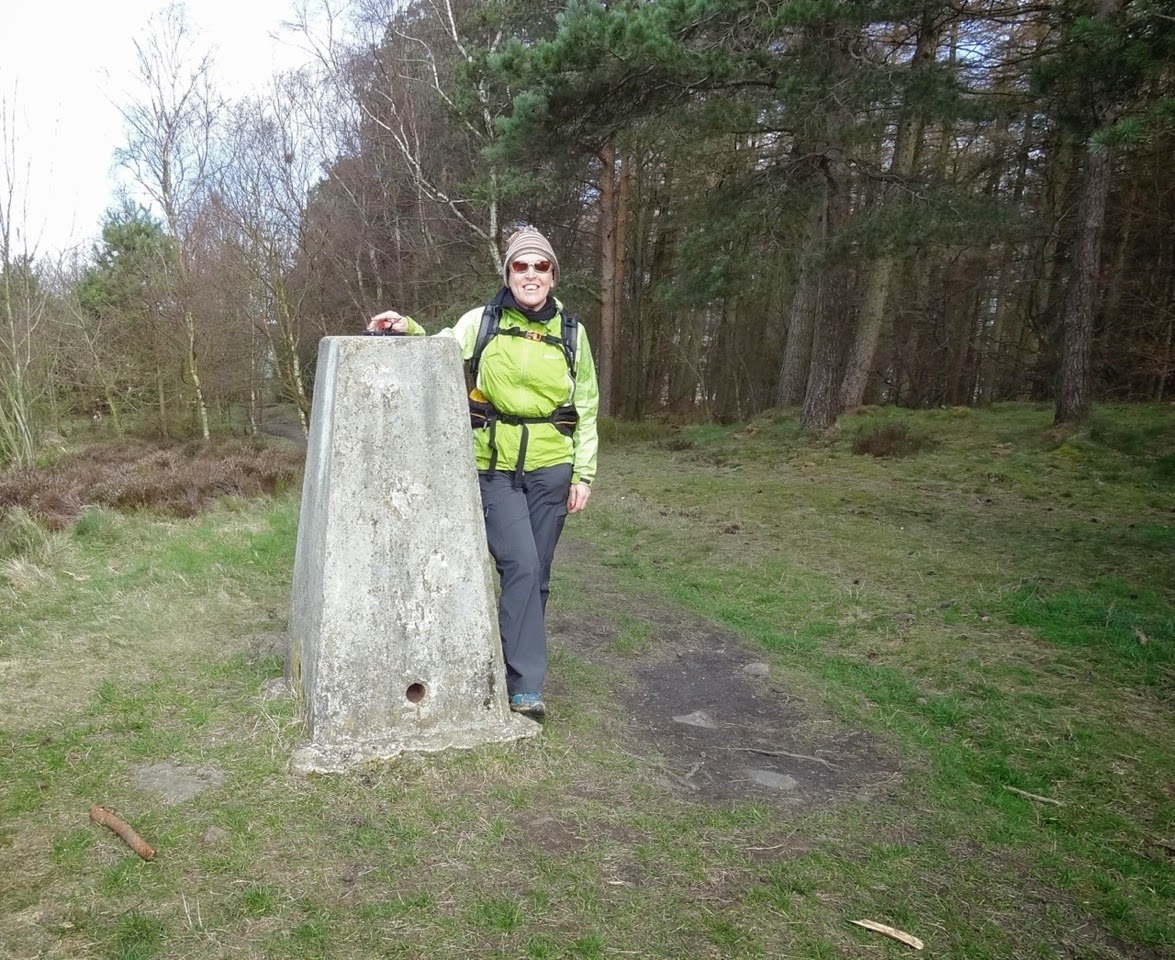 We now entered a very popular park circuit. Lots of people about. Many runners and marshals too.
Somebody had been very busy doing sculptures, there were numerous. I will put them all on a slideshow at the end of the post. At the trig point we stopped for a coffee and to review our options of  a route back to the car.  The trig point is now completely surrounded by trees with no view to any other hill possible. 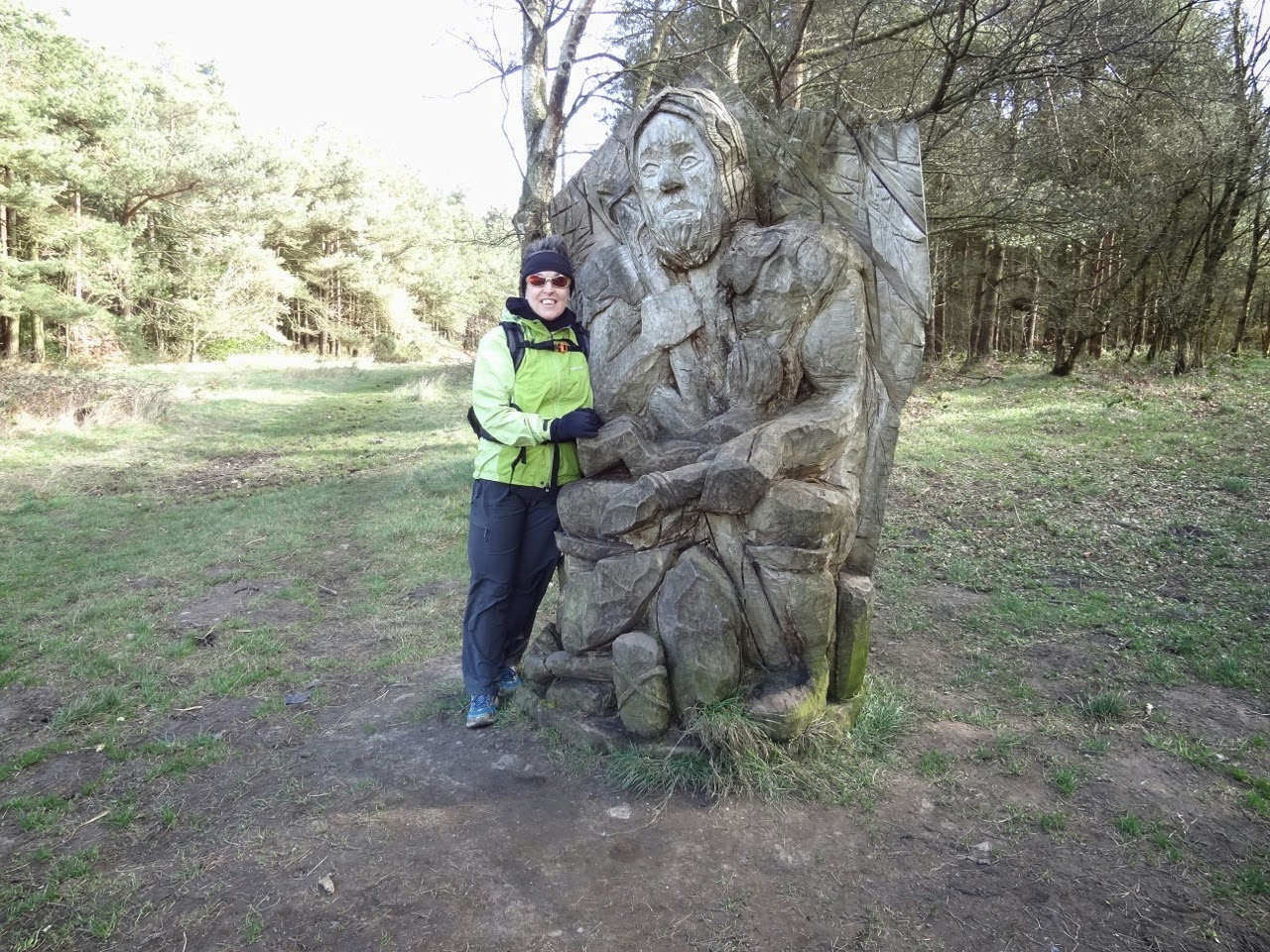 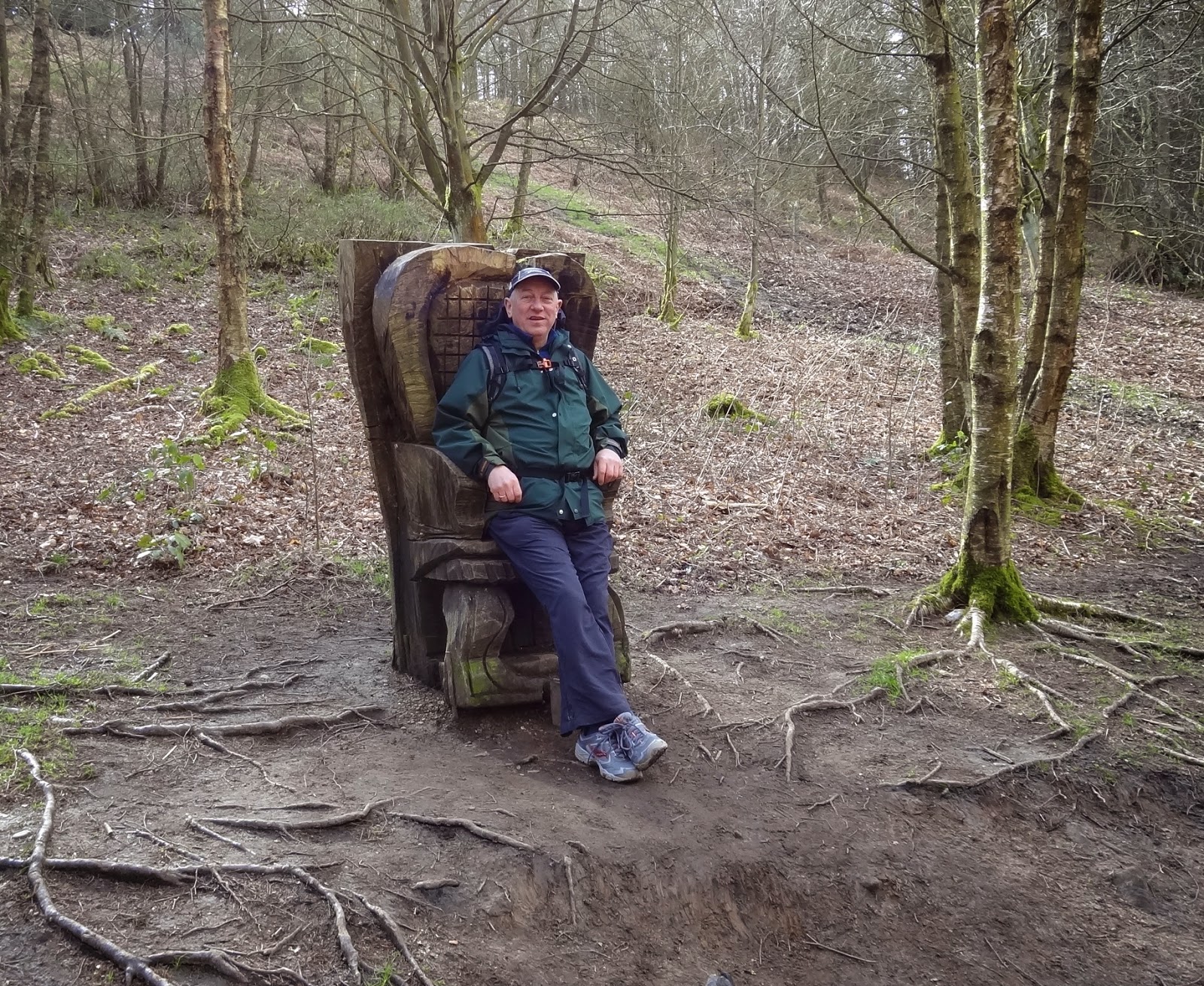 Me, sporting a new Osprey jacket kindly supplied FOC by Aclimatise. I will do a review on it when i have had the chance of some wet weather. First impressions are that this is a general purpose, everyday type of waterproof. Not a backpacking jacket, although it could be used in the colder months. A little on the heavy side but not ridiculously so. 750 grams. Its comfortable with the soft lining that resembles Paramo linings in some way. Waterproof zips, double storm flaps over the main zip and an excellent hood. More to come.

We headed back towards Chevin Rd East through Caley Deer park and Chevin Forest park on good well used paths. Once at the road we crossed a stile and across open fields where the views opened up again eventually exiting onto York Gate. Walking along York Gate can be quite dangerous, its a narrow road and very fast in parts it doesn’t leave much room for any driver error.
The pull of the Royalty pub was too much and we called in to see what it was like. Unfortunately most decent drinks were off leaving only keg lager and bottled beers. The service from a young lad was at best rude and if this is what it used to be like then i’m not surprised it shut down.

So it was back to our log cabin in the woods and a chilling night. 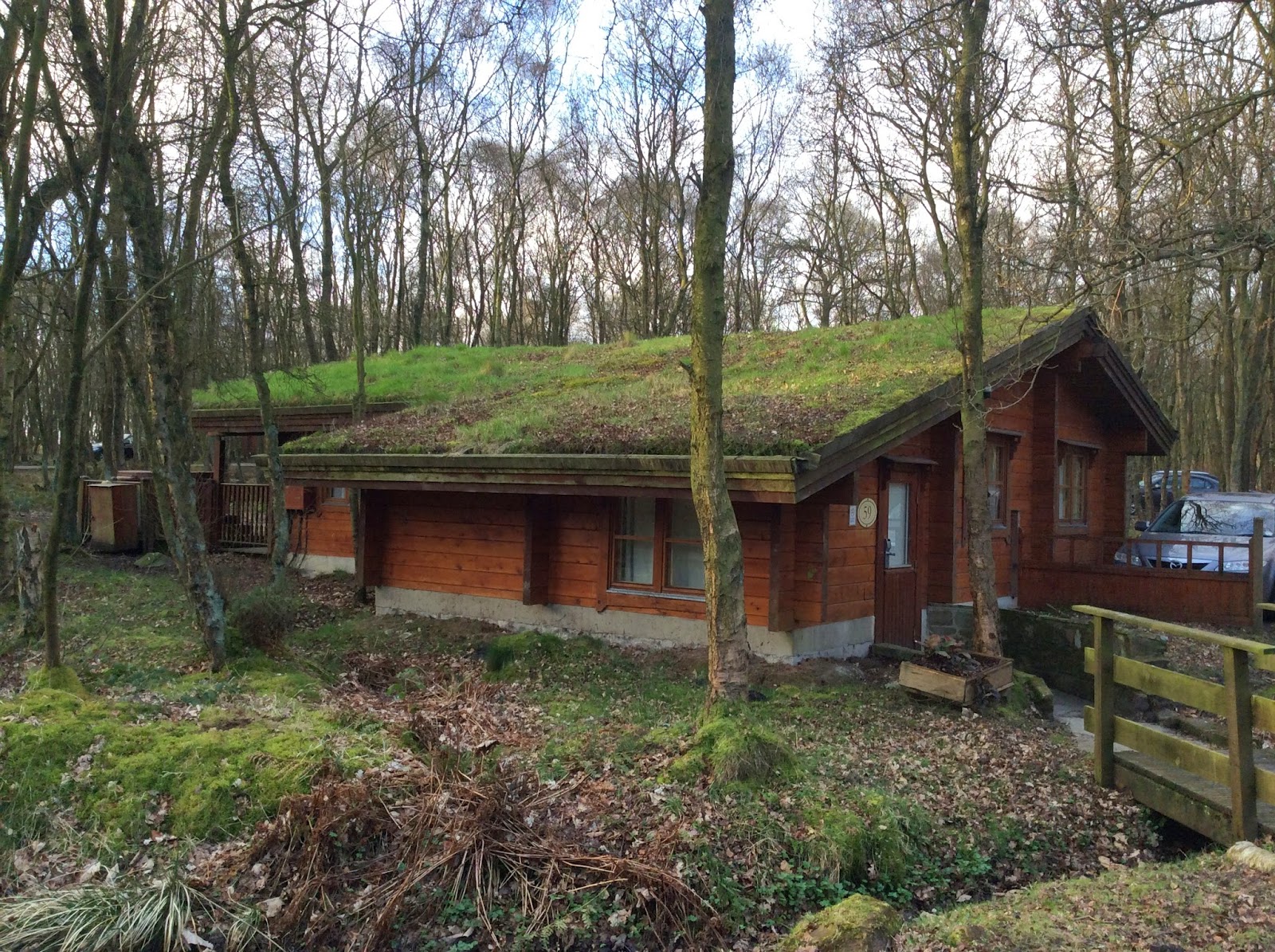 The route map.
We started at the “P” to the right of Your Route legend. The distance was just under 10km but the Naismith’s time is only calculated. We were out for just over 4 hours and enjoyed the walk.

One thing which was brilliant was that not a single wind turbine could be seen. Long may this remain. Well done Yorkshire.

Yes chilled to bits thanks Martin. See you Wednesday?

Not fair! I'm becoming convinced that our fog and drizzle of this weekend was personal to us; everyone else seems to have had blue skies feature for at least some of the weekend!

We had good weather Gayle, especially Sunday. This morning started grey but improved. Sorry to read you had fog and mizzle.

Lovely walk, you are certainly starting to put the miles in. Fantastic

My father, being deaf, served in The Royal Observer Corps during the war at a post on Otley Chevin. It was manned on a rota basis, and the task was to look out for enemy planes. I'm not sure of the exact location of the post, but I suspect it's long gone.

Thanks Dawn. I wouldn't call it training exactly but its better than nothing.

There are some odd shaped old buildings on the ridge line which are now used by farmers. One of these could have been an observation post I suspect. Worth delving a bit I think. I bet he enjoyed his time in Otley.

Hi Maria, no, no blisters, the shoes are very supple unlike my knees.