Clear skies, chilly morning and a busy journey for me on the motorway brought 9 male plodders together at the car park at the southern end of Rivington reservoir in Lancashire.
The route was put together by John Pickton and had replaced a previously organised route around Appley Bridge. The latter cancelled i believe due to the vast amount of mud.

Dead on 10.00am we set off and headed for the folly, a scale replica of Liverpool Castle built by William Lever, Lord Leverhulme. 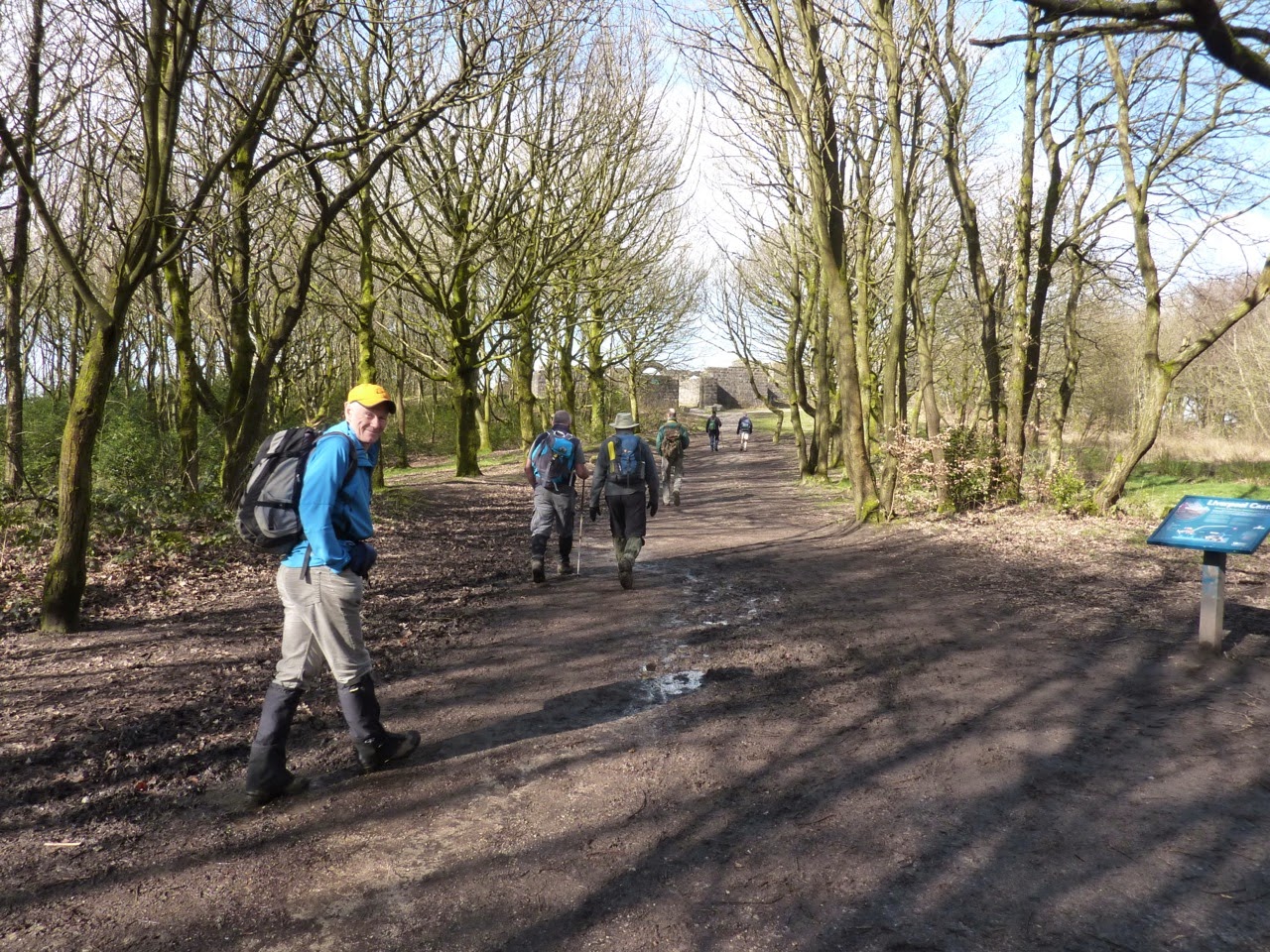 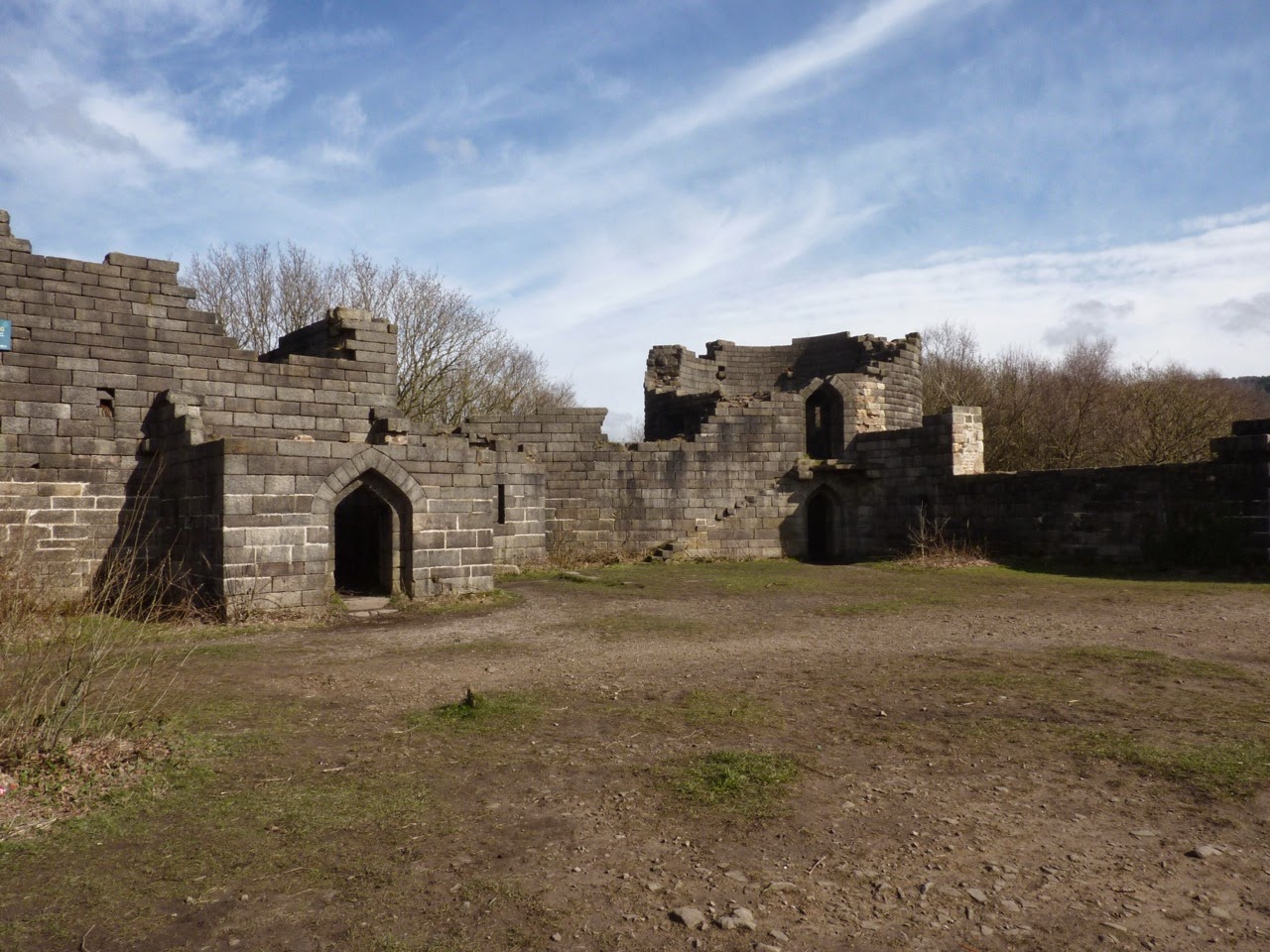 Rivington Castle folly.
The path heading north following the shoreline was quite busy with dog walkers. The road bridge, the  Horrobin Causway between Rivington’s upper and lower reservoirs is a lovely spot with views up and down the waterways. Depending on the light you can get some lovely photo’s here. 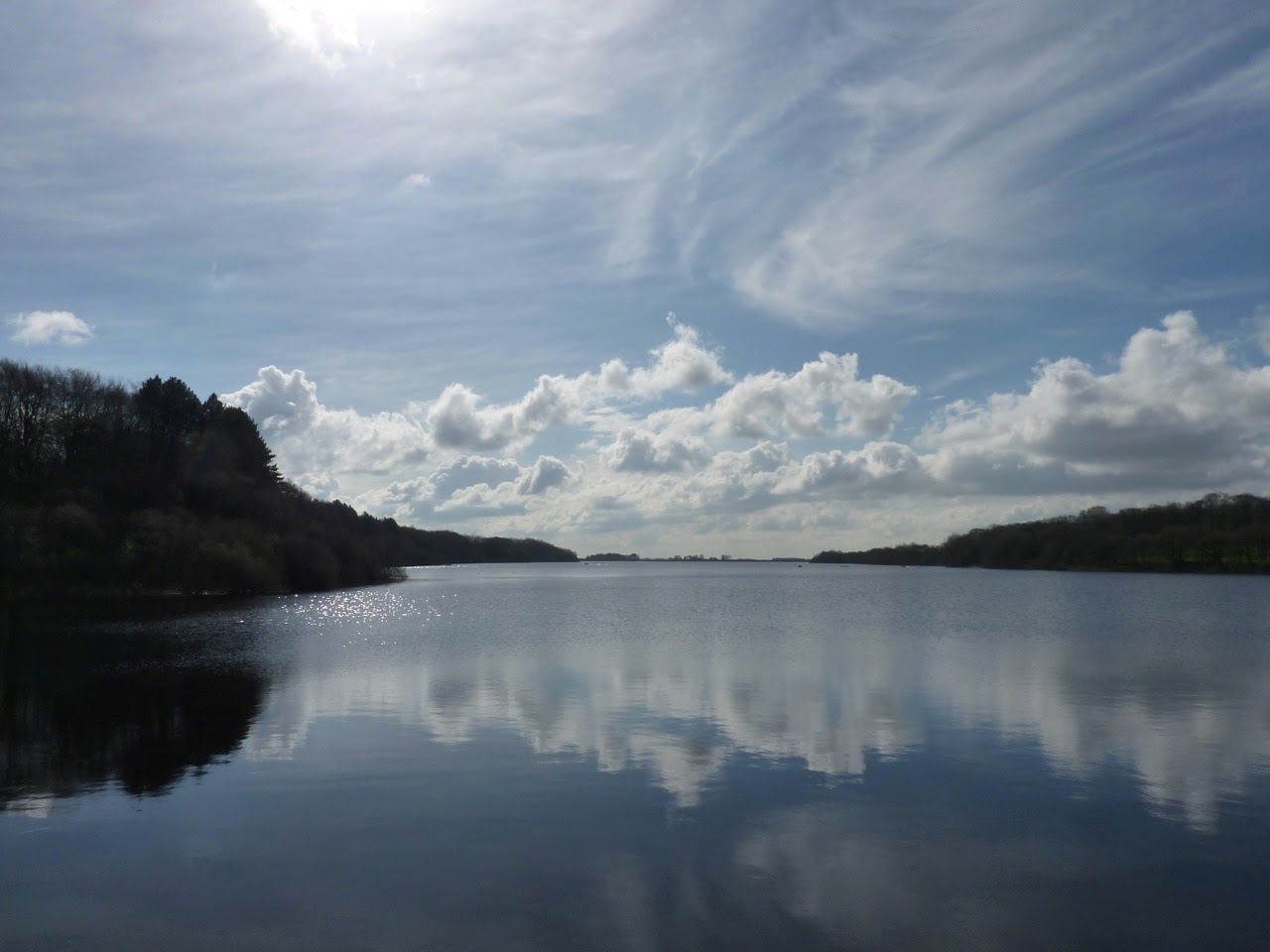 Looking south down Rivington reservoir.
As is usual with the plodders walks as apposed to the LDWA weekend walks there was time to take photo’s and chat about the scenery without being left behind. At the end of the causeway a smart house has the Liverbird on the chimney wall. 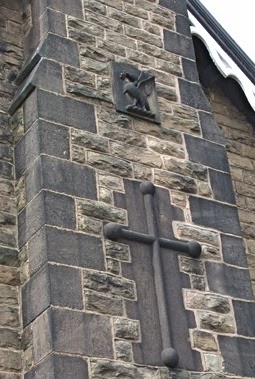 John stopped at a very grand house on the west shore of the Upper reservoir and told a bit of a story about it being owned by a member of the Warburton family, the bread people. Obviously sarcasm was rife about needing plenty of dough, a large slice and a crust above the rest being just a few comments. We moved on quickly. 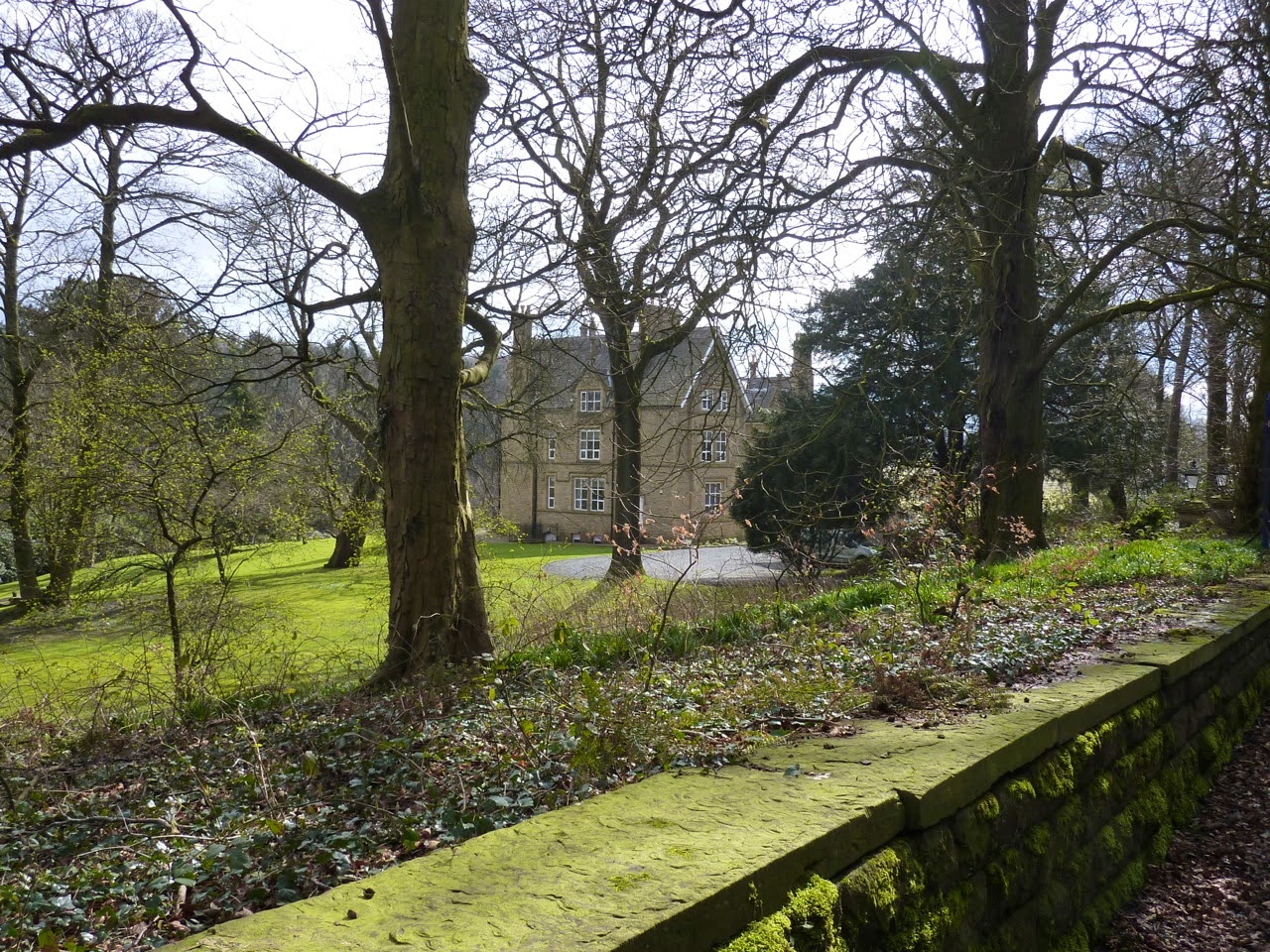 "The Street”, owned by the Warburton family we were told.

Further along on Heapy Fold lane offered a good place for a tea break on a dry grassy bank where Martin shared the renowned delightful fudge brownies.

We were heading for White Coppice, i had been there a couple of times before and its a well kept village with a cricket pitch on the village green. All very English. However there was a few obstacles on the way as you can see in the images below. 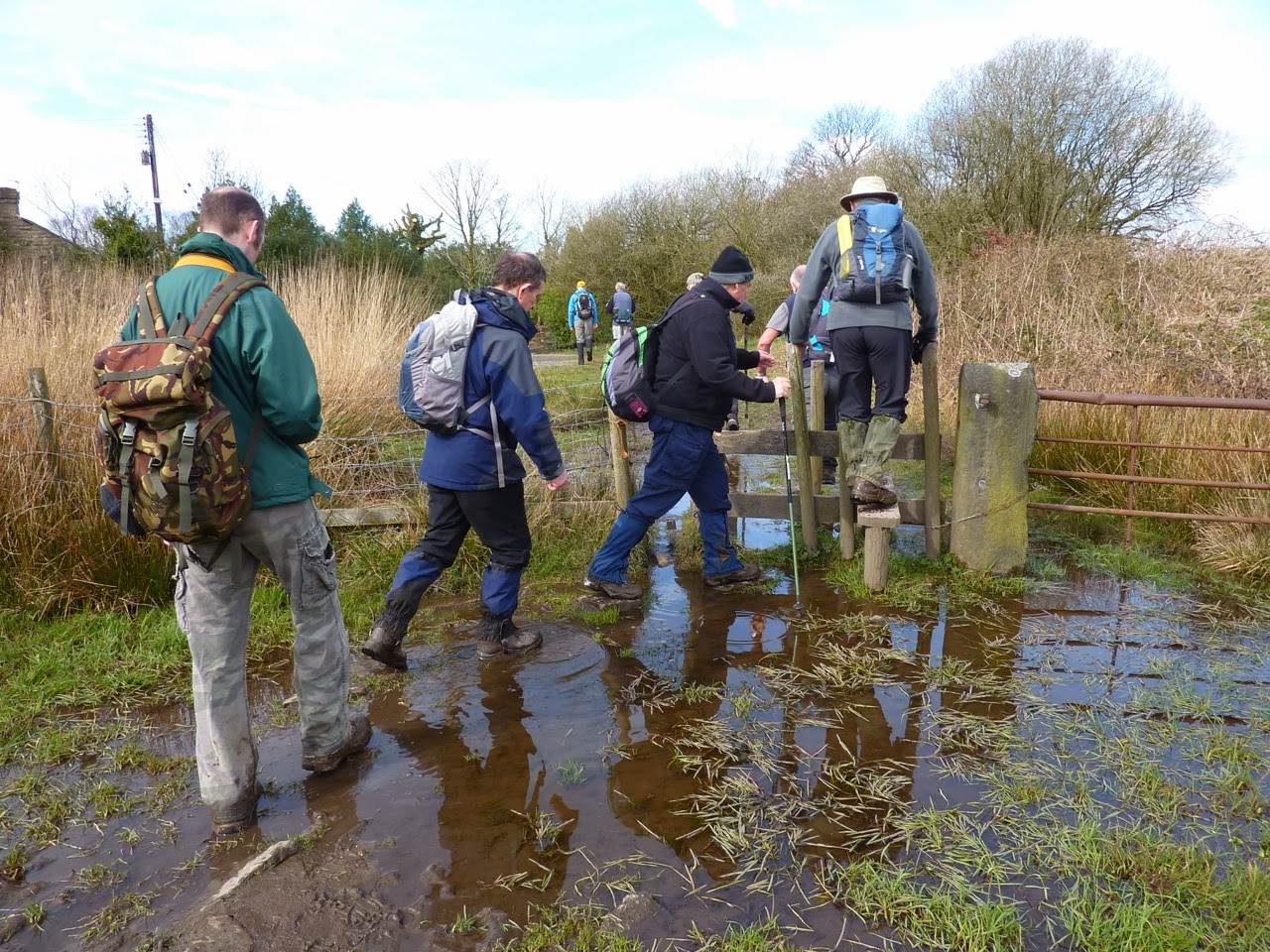 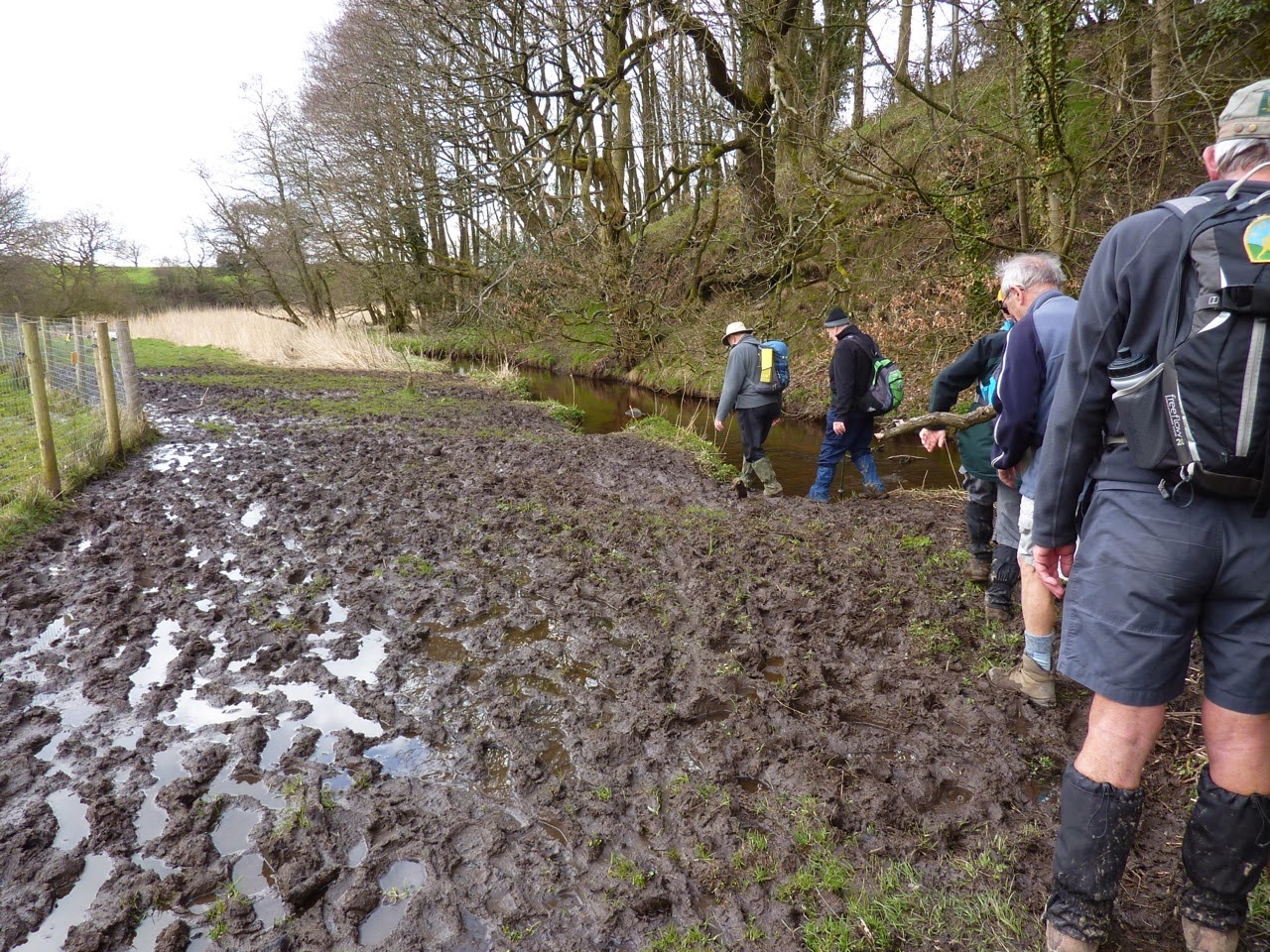 At this point my trail shoes were full of the stuff, and i could feel muddy water between my toes. I reiterate that once again Sealskinz socks are not waterproof for long. This was only my 3rd time of wearing them. (Cleaning them out at home later i found 2 leak points)
Considering White Coppice won the best kept village a few years ago it shows that things have “slipped.” 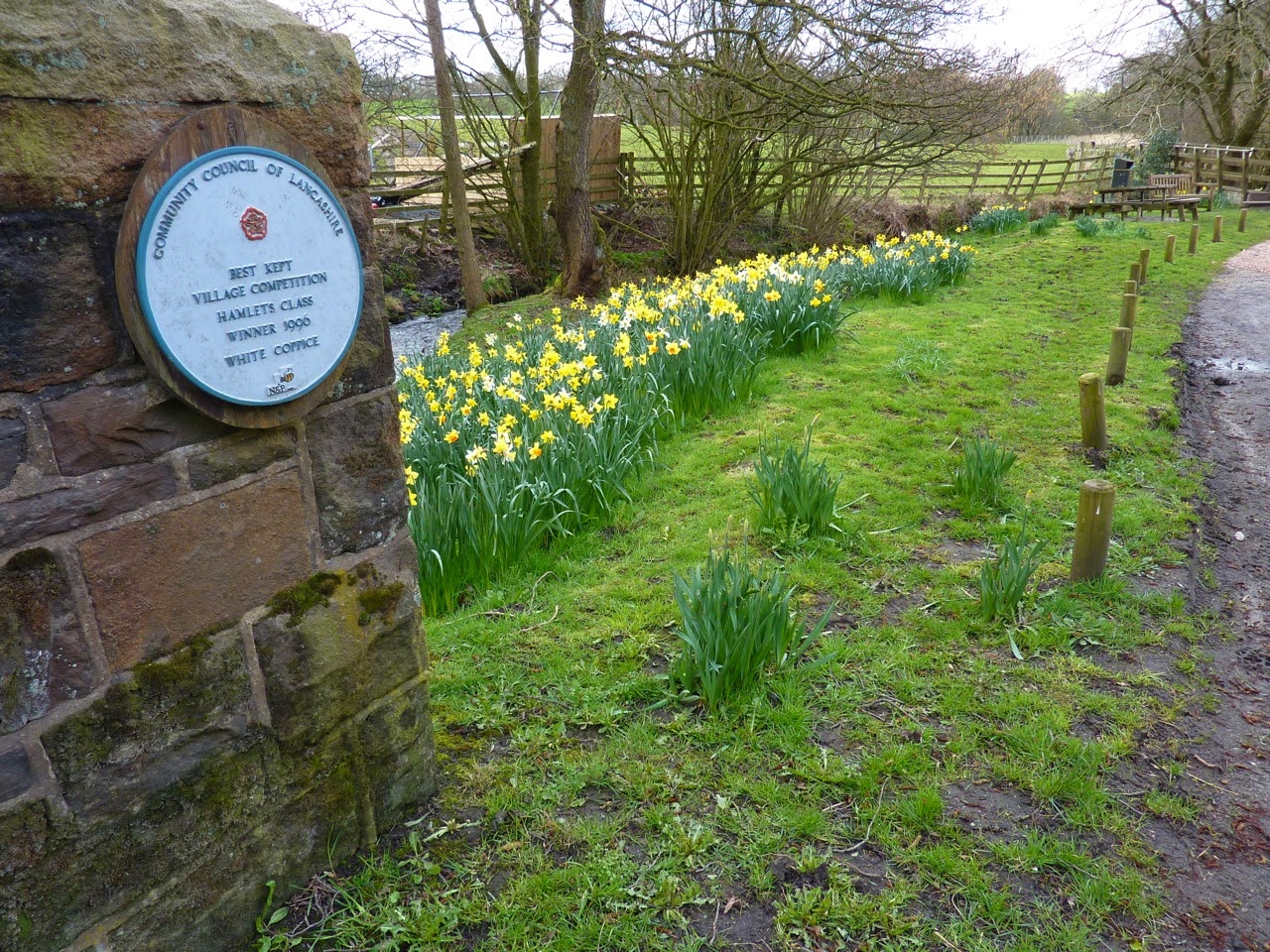 Passing a farm on route we were surprised to see Emu’s and goats and lots of chickens, rabbits and probably other species which went unnoticed. I liked this sign below. 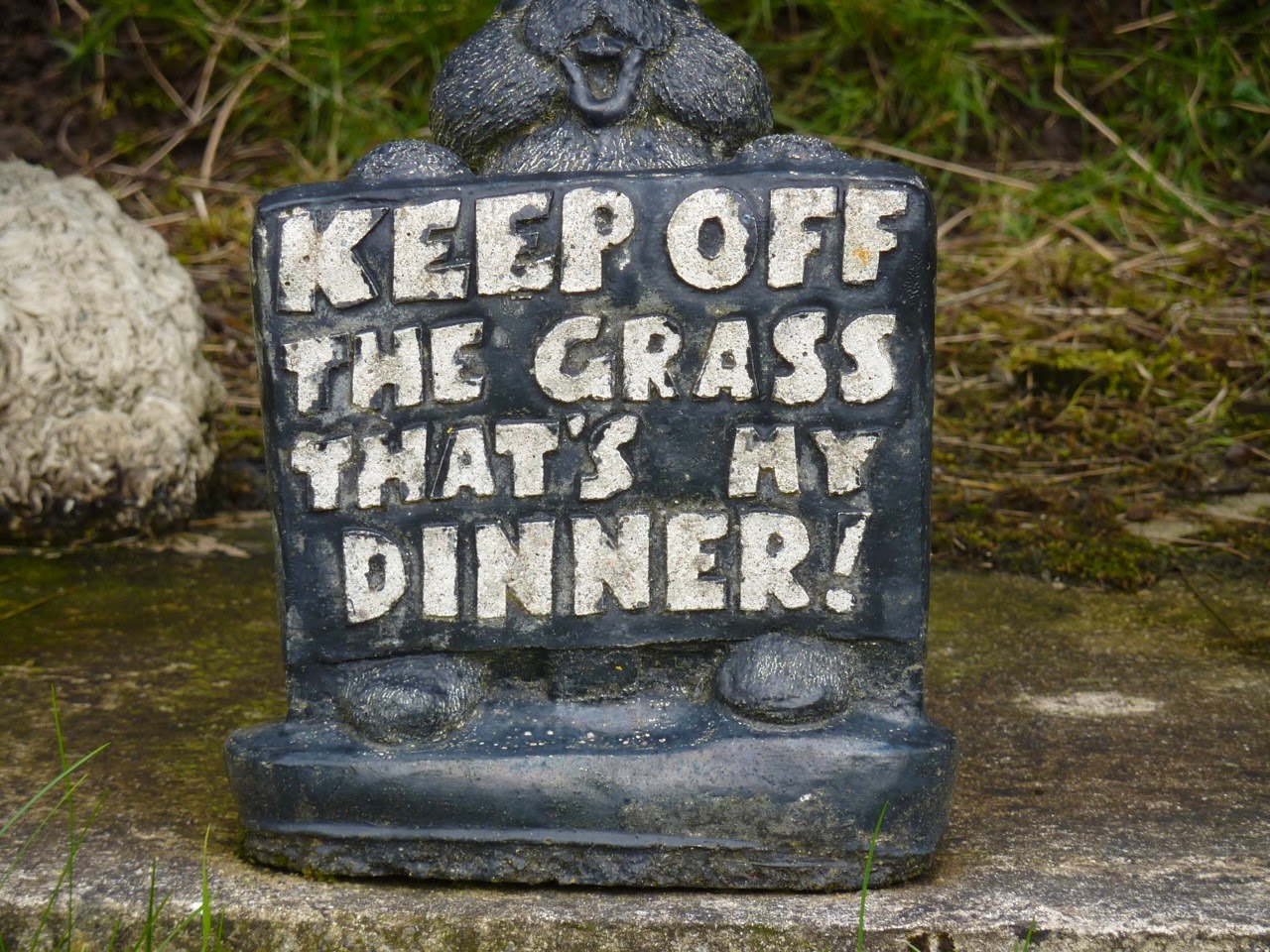 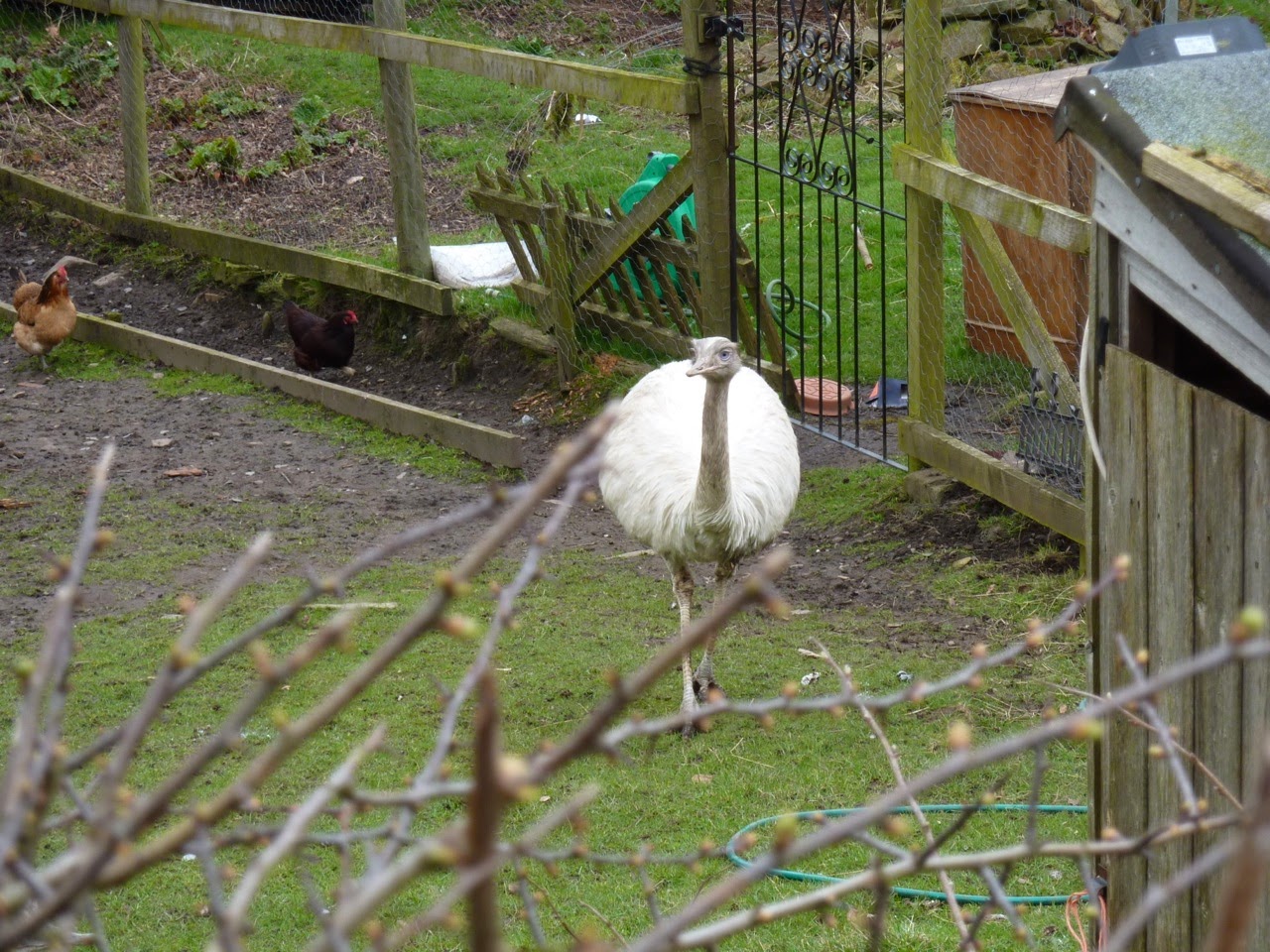 A fine Christmas lunch. Do we have a big enough oven?

Lunch called and so we stopped at the cricket pavilion which was closed, as was the loo. But Martin produced even more fudge brownie to keep us going for the long talk back.
The opposite bank gave delightful views of Rivington Pike and Winter Hill as we made progress south.
We spotted White Mallard which Martin convinced us were albino, i still have my doubts. 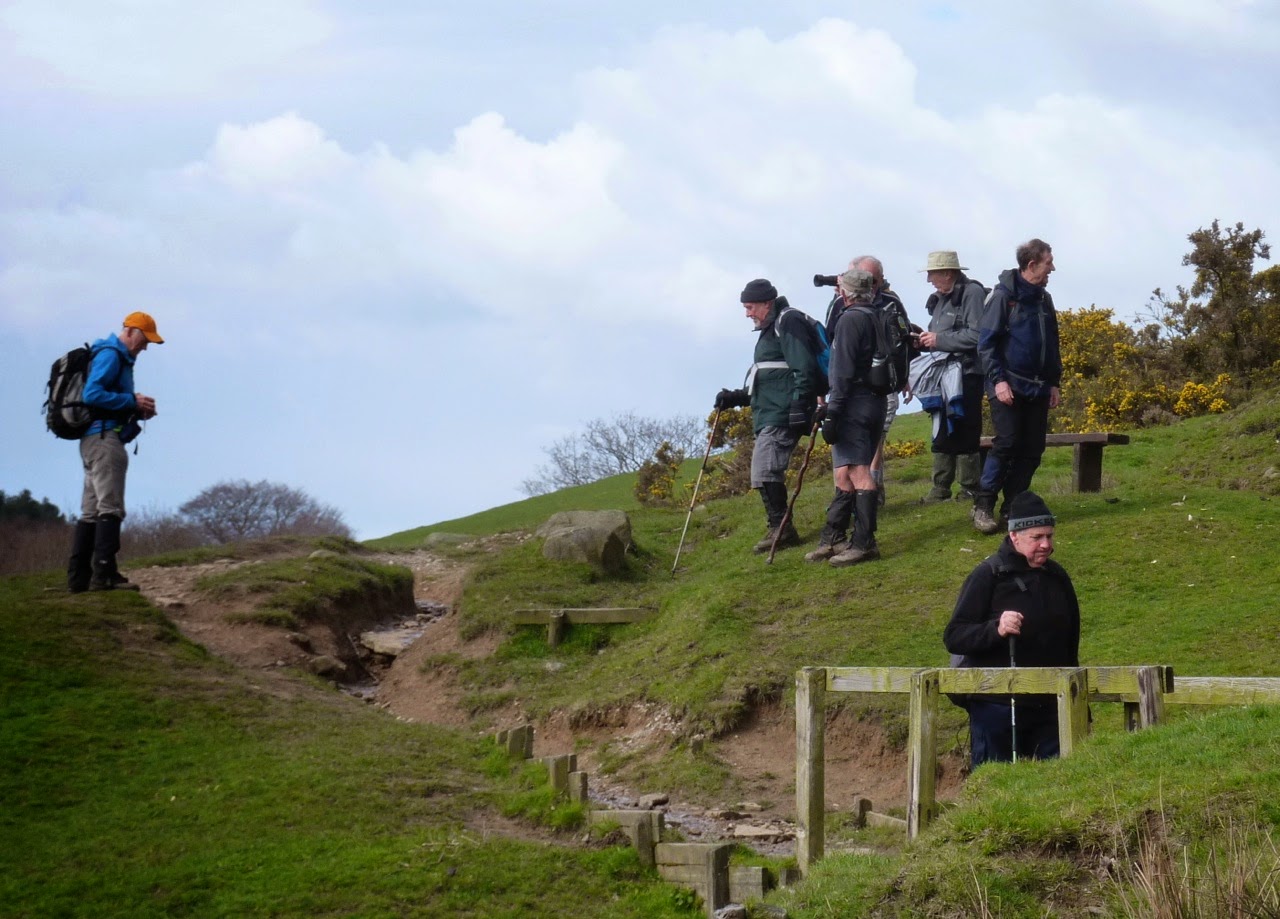 It had been quite a day for spotting species and i’m sure Martin will have kept a list. There will be an account on his blog at some point.

Just before we reached the final 1/2 mile we passed a tea shop that just invited us in. Whilst we queued, our leader John, burst through the swing doors like John Wayne and said there was a revolt outside as some of the party wanted non of this nanby pamby tea drinking malarky and much preferred the cold stewed tea and coffee that they had brought with them in their flasks. John said that a vote had been taken to move ‘em on.
Well Martin was going ape when he found out that we had not been added into the vote numbers and wooden’ move till ‘eed had his tea. It was all good fun. thanks to John for organising the day. It was 18.5km and no rain. I will put a route map up when i pinch it.
There are some pictures of the walk here. 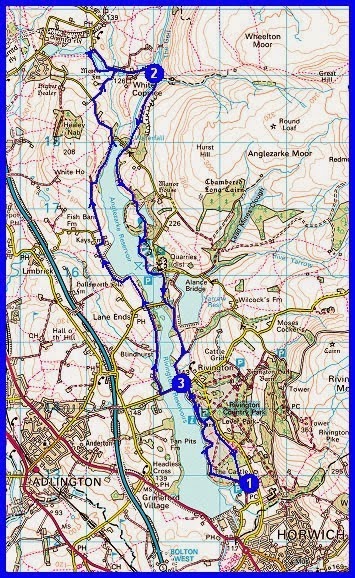 Thanks to Martin B for allowing me to pinch the map from his blog!
Royalties are in the post.

Sloppy looking Alan, nice one though. Not long now until May.

Very good Alan. I'm just processing my photos. May steal some of your words...

That was some mud you had there at one point. Must have been a tad wetter up there of late. I've been very pleased to find that our mud and water obstacles have dried remarkably over the last couple of weeks. It makes for easier going and cleaner trousers!

As a mud avoidance walk it was a complete failure. Nice day though.

Thanks Martin, You can have Mud and map. Ha

Tuesday was a wash out here Gayle but i won’t wallow in it.

Nice map, Alan - the royalties must cost a fortune. All that mud was actually avoidable, you know - I drove home in my boots and just put them back into their storage bag - they were clean...
Take care
M

The effort i went to doing that map! Yes Thanks Martin, i am still waiting for Satmap to come up with a solution so that i can use the GPS with the Mac. Even the latest update doesn’t resolve the issue. I could use another Co. like WalkLakes for example but seeing that you had already done it i thought i would pinch it.
I can’t believe your boots were that clean unless you walked in puddles on the way to the car. My trail shoes took 3 washes like yours last week and my socks were just as bad.