I slept reasonably well. So well that I didn't hear the snoring coming from the other 2 guys in the dorm. JJ said it was not me so that was a nice surprise.
I sorted out my bag, breakfasted, bought a banana, had a chat with Martin Angell, signed out and off we went.
It was a still, lovely morning. We followed 3 Dutch chaps along the road but they somehow found a short cut up to our path which we picked up at Annat. I'm still not sure how they found a way up but i think it was behind the comms mast. Anyway, we passed each other regularly for a while. We also bumped into Nigel, Roger and Mike.

Once more, back across the stepping stones where we were caught up by Graham and Marion Dunsire who were moving much faster than us. Then around numerous lochans and up to Bealach Na Lice. The weather was holding out as we made good progress to Bealach nan ban. On the way up i managed to catch a Geko. 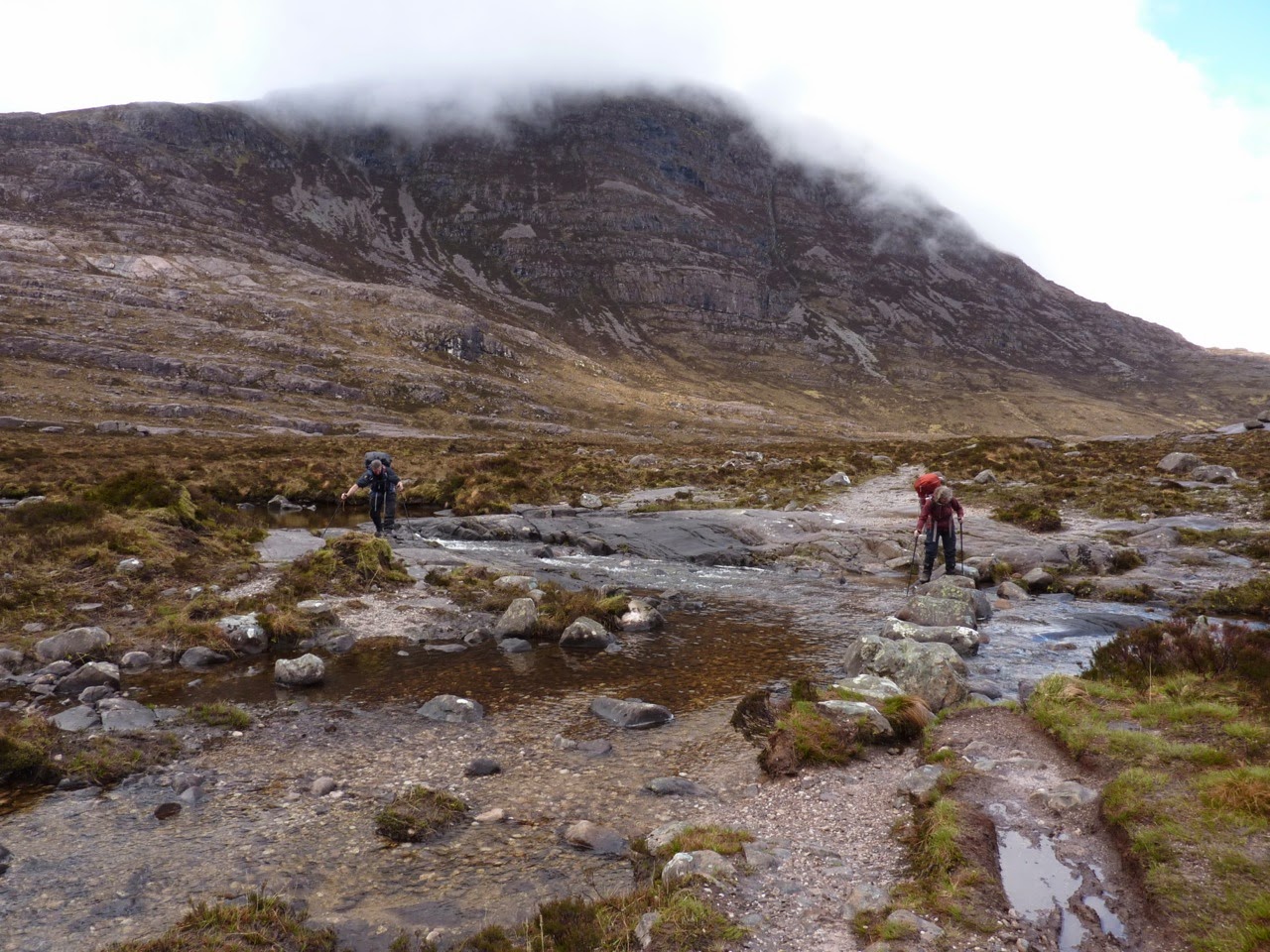 Viv takes on the stepping stones but JJ tries a short cut. 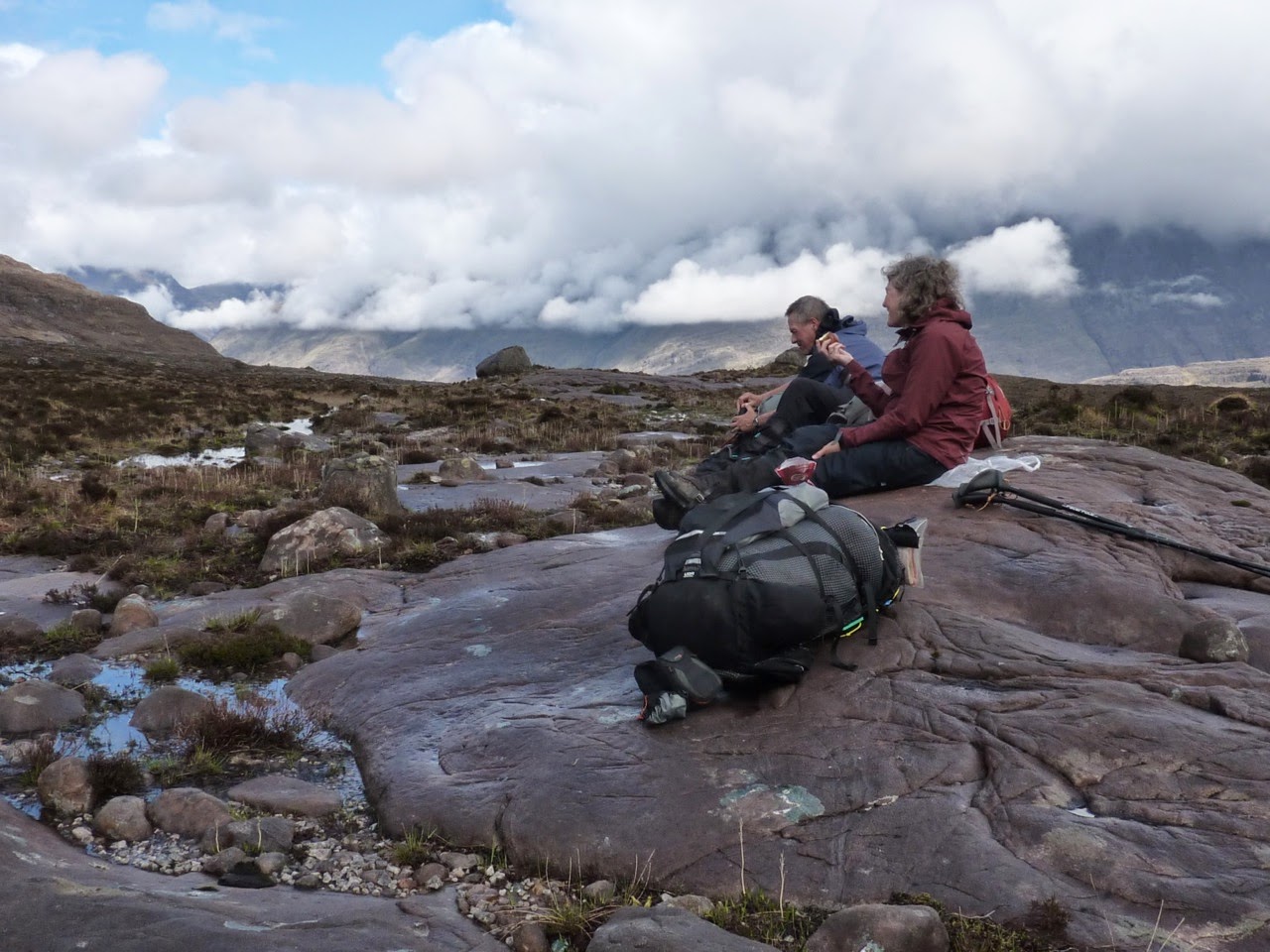 1st break of the day with Liathach cloaked in cloud behind.

Our first navigational error occurred at the top of Bealach Nan Ban. (Future challengers beware of this). We made the error in good weather so it needs careful attention in bad. 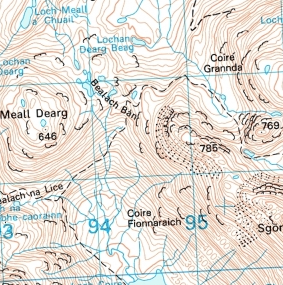 You will notice that the path marked on the map goes through the “B” in Bealach Ban. Just above the "B "the Northerly path takes a serious direction change to the SE. On the ground this is marked by a small cairn. However, we missed this and carried on between the two small lochans whilst looking for a path that didn’t exist. We knew we had gone wrong but instead of backtracking we decided to take a hypotenuse compass bearing that would intersect the path. This was a mistake too as the terrain is quite craggy and the easiest route would have been to backtrack and pick up the correct path.
So be aware of this please as we found out we were not alone in making this error.

Once back on track the going was good and we enjoyed lunch just before the pull up to the next bealach at the top of the Coire Lair. Just as i reached the loch the heavens opened and it poured down. Visibility was still good but the wind was quite strong. I slowly advanced while the others caught me up.
Numerous burns had to be crossed down Coire Lair but nothing of any substance. White water was pouring off the hill sides and made for a wonderful scene, especially Sgorr Ruadh 962M and Fuar Tholl 907M.
On occasions the rain did let up allowing me to take the odd photo but the majority of the time the camera was kept in the bag. 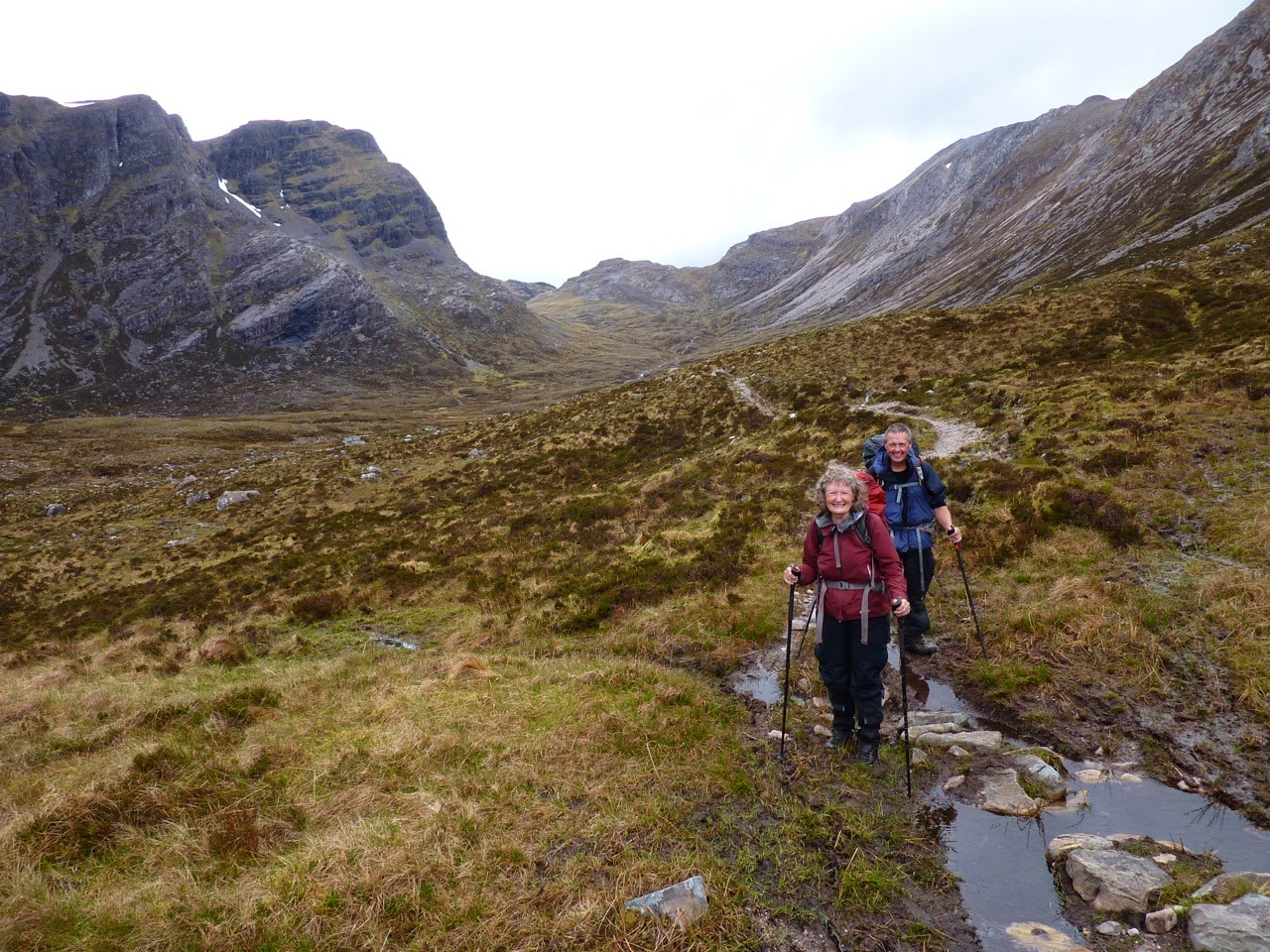 A bright spell, coming down Coire Lair.
Soon Loch Dughaill came into view and the expanse of forestry which encloses Achnashellach and its small railway station. The map shows a path following a deer fence down to the railway line. Although this path does exist it is widely overgrown and although work is taking place to upgrade and cut back the foliage it is still work in progress. We continued. We got wet, very wet.
The easier route would have been to go through the gated deer fence and then pick up the LRT through the forestry and to the station. Hindsight is wonderful as they say.
As it was, we ended up next to the railway line and more or less in the back garden of Station House.
The owner kindly let us exit his property and told us that this “Old” path was the original route but now the LRT is used. At least until the path revisions are complete.

We carried on east along the LRT until we met the “A" road where it seemed to take us ages to get to Gerry’s Hostel at Craig. Fortunately the traffic was very light and the rain was too.
Now we, like lots of other challengers have heard tales of Gerry’s Hostel. We arrived at 6.15pm and he was expecting us. We were told to take our boots off and hang our dripping clothes in the drying room. Then our bunks were shown to us.
A number of challengers were already in residence. Bert Hendrikse, Suus Hubregtse, Martin Angell, Brian Aspinall and son i think and others who’s names i either didn’t ask or forgot to write down.(Sorry).

Gerry explained how the showers worked and said he would catch up later. A shower was nice and it was good to get the wet gear off. We said our hello’s and made a brew which was very welcome.
Gerry was checking in new arrivals and making sure that he had enough places left for those who had already booked a bed. He made sure everyone was comfortable and had everything they needed.
I have to say i don’t understand what people expect and why in certain quarters this hostel has what i can only describe as a dodgy reputation. We 3 said yes the place is a bit querky but treat it as you would like your own home to be treated and everything will be fine. In the morning Gerry asked us if everything had been ok and please call again if in the area. 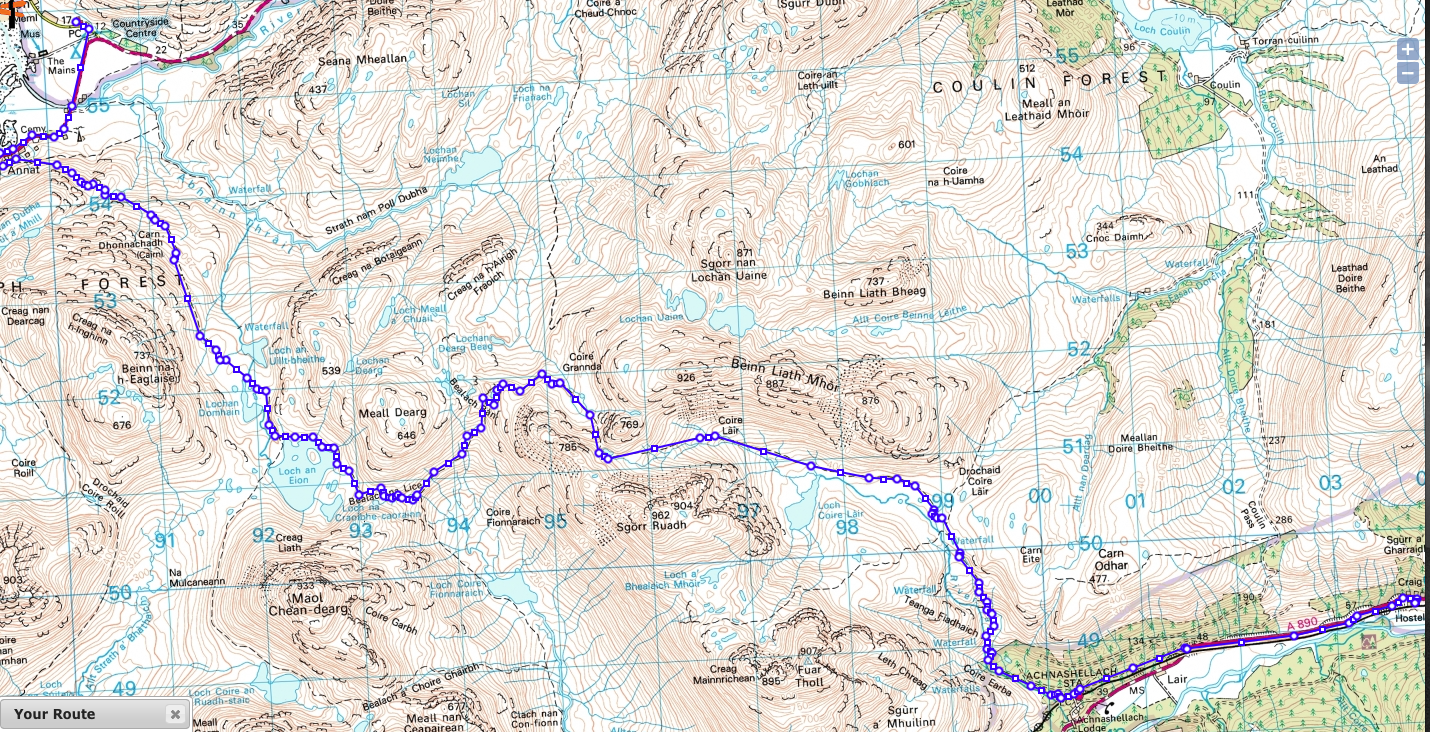 That pass was simply stunning. I am yet to find a better one to walk in Scotland. I kept going past that bunkhouse. Tales of what it's like was the talk of the group I was with last year.

That is a tricky path in places. It is a few years since I last walked that area, fantastic though, in even in poor conditions. Gerry's is everything one would want in a hostel. Yes, it has had a bad press in some quarters; however, having used it a time or two, once coming in after being out in foul conditions and being welcomed with a hot cup of tea, I would say, never knock it.

Hi Martin, We were lucky to walk the route in mainly good visibility. It would have been a shame to miss such a delightful scene. Gerry’s is a good place to stay. Don’t listen to bad press, stay once and make your own mind up.

Hi Dawn, Generally the route is good on the ground. Just that one spot that we missed needs you to be wide awake and not chatting.
I have no problem at all with my stay at Gerry’s.

Looks a good start. I shall try to remember the wrinkle in the route, should I go that way :-)

Its a wonderful start in good weather. It would seem that folk leave Torridon for their 10th crossing, something special, but i think its probably got more to do with accessibility.

Alan I am looking forward to reading all your installments and then commenting at the end rather than after each post, but great looking scenery to start off in.

I’d say that sums it up.