A still night and one of only 2 nights that i had real condensation on the inner tent.
I was half awake when Croydon’s voice pierced the serenity. “Al, do you want your wet stuff washing”? It was 6.30am.
I replied “Yes thanks”. There’s a queue already he said, so i thought better get it done.

At 7.00am i got up and wiped down the tent. It was a lovely calm morning. I didn’t make a brew as we had decided to take up the early breakfast in the cafe. Sheila was opening at 7.00am.
I had put my boots in the drying room/boiler room but they weren’t much dryer to be honest.

Somebody woke me during the night, packing up at 3.00am! It was a Scarp 1 if i remember correctly. 3.00am, for Gods sake.

By 7.30 most folk were up and about and my gear was packed. I walked to the cafe and dropped my bag and waited for the others. JJ and Croydon hung their wet flysheets over the cafe balcony to air out.
Breakfast, full Scottish, was wonderful and nothing too much trouble. Seconds of tea, coffee, green tea, toast and marmalade kept coming. FOC. I asked if i could buy a couple of green tea bags for later and the reply i got was “Do you realise you have had 5 already”. But go on here is another couple.
Thanks Sheila for going that extra mile.

Post breakfast, Croydon was away. Not sure which route he took as we never caught him on the way to Drumnadrochit.
We set off down the road with Dennis Pidgeon. It had been hinted that around Bearnock there was a cafe. We saw the road signs but no cafe exists anymore. At the very nice Loch Ness hostel we thought they may do some food but alas no. Kindly though, the warden let us use the kitchen to make ourselves a drink. The hostel was a nice place.

We planned to take the LRT (Land rover track) behind the house at Shewglie. Dennis said he had done it before. We passed the beautiful house and approached the outbuildings. At this point we hit a bit of a dilemma. There were numerous tracks going in all directions. We started off on one and Dennis said he thought it was the wrong one. Then another one he thought ended at a high wall. 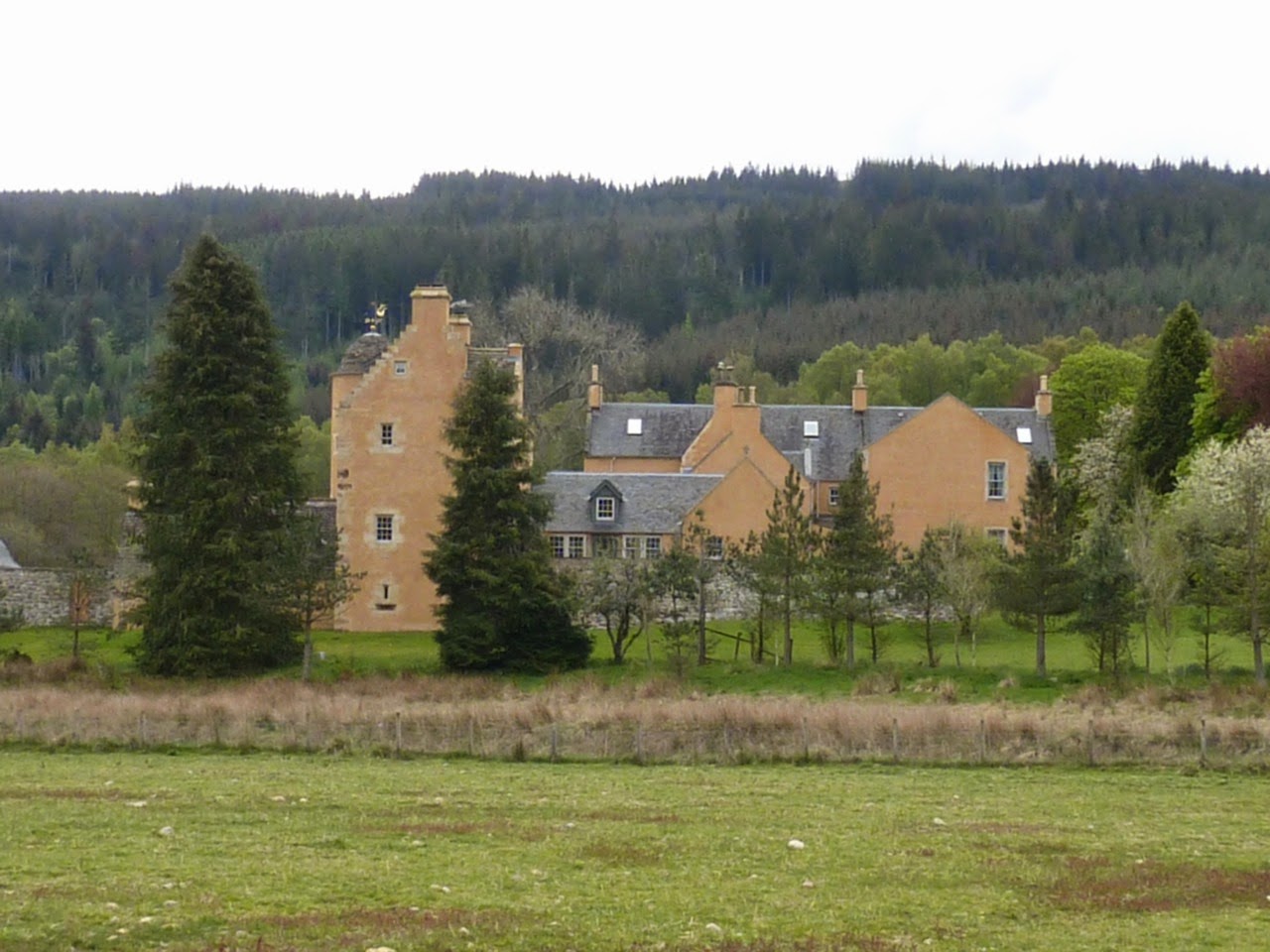 The fantastic house at Shewglie

We looked at the map and Martin fired up Viewranger on the Apple smart phone. “We are here and we want that track there, etc etc. He said.
So off we went and it wasn’t good. After about 3-400 hundred yards the path narrowed and became enclosed with fallen trees. We worked around them catching our sacks on the myriad of branches. Another 2-300 hundred yards and we were at a dead end in thick forest. A stream to our right looked a good option to get us onto our LRT so Martin, Viv and I set off up stream to investigate. Again it was a dead end.
Upon returning to where we started the stream JJ and Dennis had completely vanished. We shouted, but nothing was returned. Viv was a bit annoyed that JJ had not waited. We had no idea which way they went but we guess they went back.

We decided that the easiest escape route would be to head down to Loch Meiklie. We found a loch side green lane, gated in sections, and we exited at Lochletter.  We shocked the couple in Lochletter Lodge as we approached from the rear of the buildings. However they were lovely about us trespassers and told us the easiest way to get to the bridge over the River Enrick. They also told us that the green lane we had come on was actually the old road.

I rang JJ to see where they were and they had managed to find the LRT, so all was at least safe. Looking at the map the reason we went wrong was that when we approached the outbuildings at Shewglie we should have gone west in a big curve around the back of the buildings and there we would have found the LRT. Ho hum.

So, we were 3 and back on the road to Drum. A lovely afternoon but again road walking. JJ and Dennis would catch us up later. 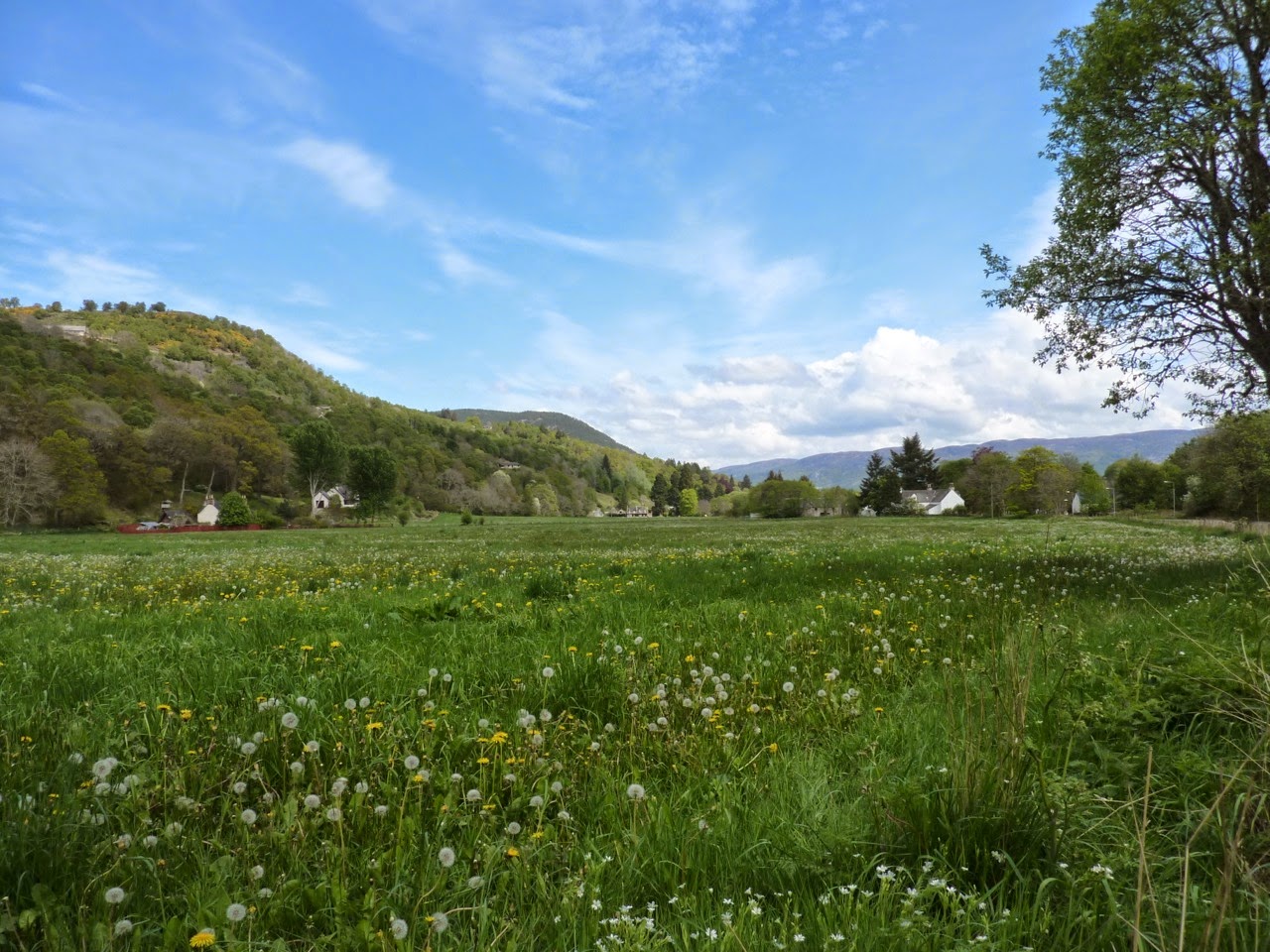 In Drum i had pre ordered a 500ml bottle of Methalated Spirit from the Pharmacy so went to pick it up. It was there waiting. Thanks Donal, very much appreciated.
Sitting on the wall opposite, Viv stayed with the rucksacks while me and another challenger, who’s name we forgot to ask were robbed without a mask at the Post Office grocery store. They must have prices for locals and day light robbery prices for challengers and tourists.

I got back to Viv just as JJ arrived. Dennis was well behind but on his way. Here we met Croydon who was quite angry that his food parcel which he had posted using the Post Offices own Poste Restante service had not arrived, or as Croydon thought, had been returned. In any case it’s not on. Fortunately he was able to re-supply at the Co-op, but future challengers be aware of Drumnadrochit.

A few challengers were milling around the pub beer garden but soon we all had to make a move to get the 5.30 Gordon Menzie ferry across Loch Ness. It was good to meet up with Laura and Louise again.
13 of us got the ferry from Temple Pier to Inverfarigaig. Both the walk to Temple pier and the trip across the loch took longer than i had envisaged. Andy Howell lost a walking pole in the loch and it was quite choppy trying to off the ferry.
Our route onward was to spend the night at Ault na goire. The lovely home of Janet and Alex Sutherland. Its a steep pull up the Pass of Inverfarigaig and it was a warm ascent too. Not everyone getting off the ferry was going to our destination. Others headed SW off the ferry. 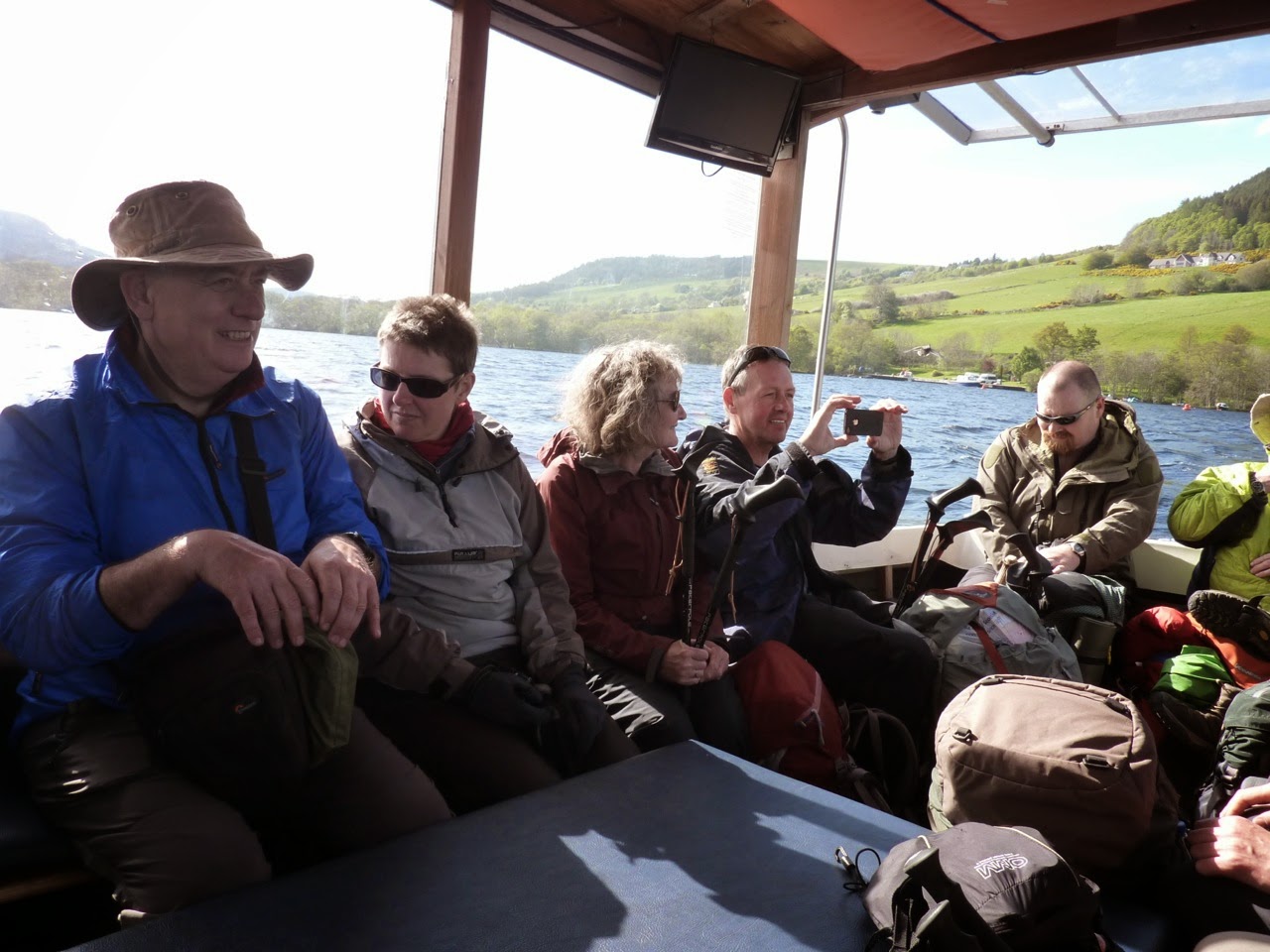 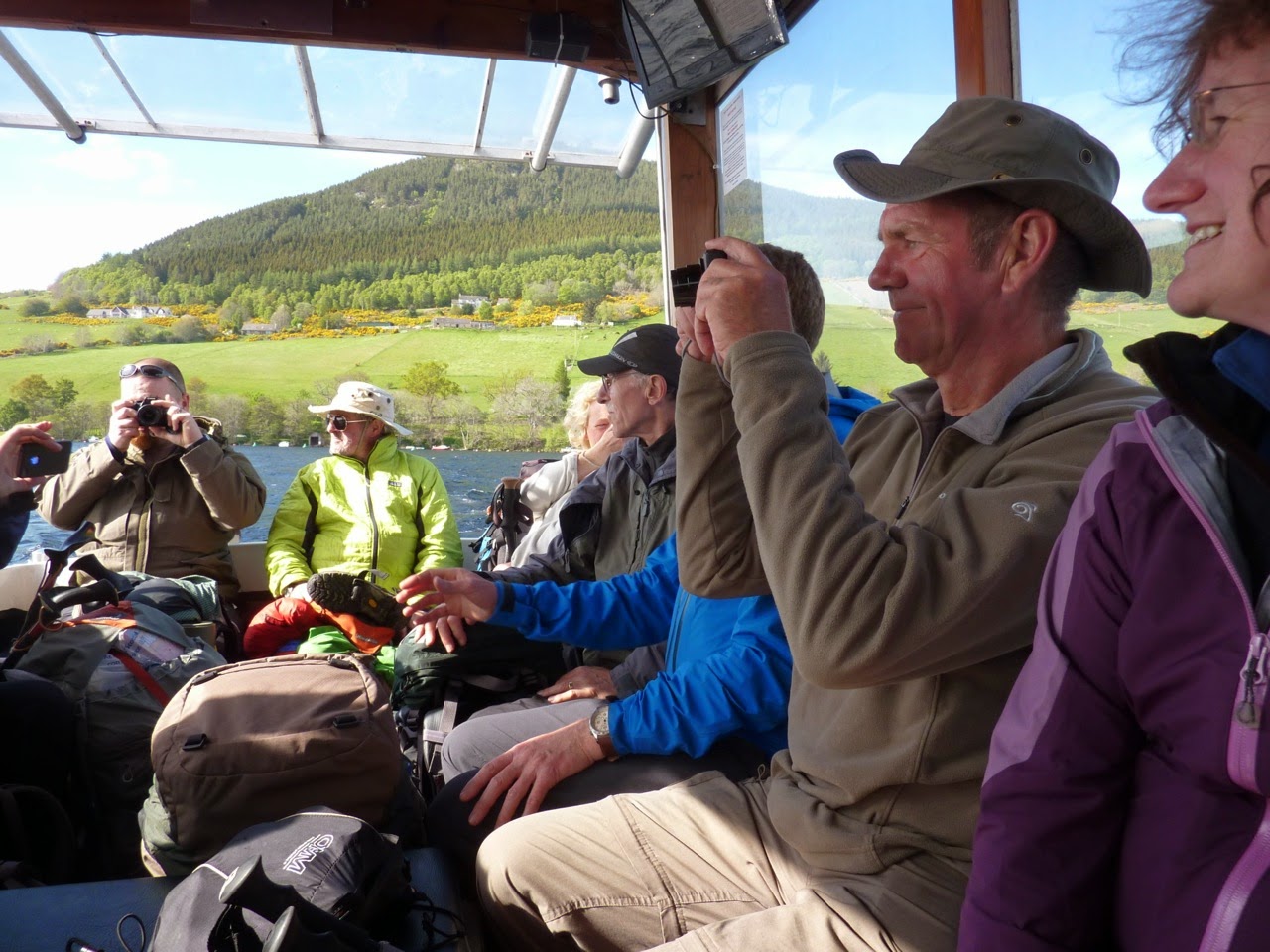 I had been told of the fantastic welcome at the Sutherlands and it wasn’t exaggerated. Tea and cake met us upon arrival, as much as we could drink. We had booked evening meal and breakfast and we had a fantastic night of good food, conversation and music. At 10.15pm i could feel my eyes closing and thought i would be the spoil sport and say good night. I think others were feeling the same way.

I fell asleep more or less straight away to a fantastic starry night and with the sounds of Sitka deer in the woods. 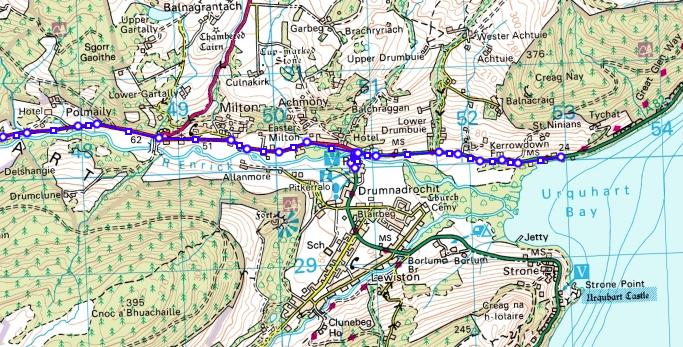 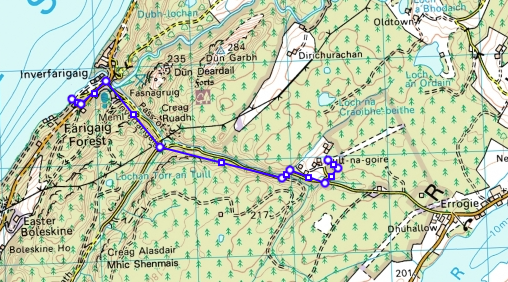 That 3am starter out of Cannich will have been Oliver. He does like an early start (usually up at 3, walking by 4). We caught him (just before he went to bed) when we arrived in Torridon this year, but missed him by about 10 minutes at Montrose - a pity as he's always a fun chap to chat with.

Not at 3am Gayle. Ha. Is he a bit pale in complexion?

It's easy if you get up early, Alan, though Oliver is considered by some to be a tad eccentric.
Am enjoying the story so far. I hope it has as happy an ending as in real life!

He probably went over a few hills on the way too.

No swearing please Gayle. Leave that 4 letter word HILL out of it. JJ will be sweating.

Now then Martin. Nobody in their right mind gets up before 6am let alone 3am. (Mmm, although Sheila does get up at 5am).
This is no fairy tale, i’ve had a word with my psychiatrist and she has confirmed it to be 100% true. Every troll knows that.

Tut tut - it's a brave man who accuses his better half of being of unsound mind!

brilliant Alan, as you can see, I am playing catch up on all the blogs. Wonderful stuff.

It's good to know that I wasn't the only one who failed to find the path at Shewglie. I had exactly the same experience as you.

Hi Ian, We should have found it easy but we did our usual trick of not paying enough attention to the map and just going by the seat of our pants. And of course the path goes west first and so our internal compass didn't compute. It was all our own fault.