It seems an awful long time ago that i was initially involved in this new waterproof smock.

This post is not a review as i did reviews on the prototype some time ago and i took a version on the 2014 TGO Challenge with great success. In fact i thought that it would have been released in May but it didn’t happen due to further trials.
The only noticeable difference from the prototype is the addition of the 2 Napoleon pockets and the coloured zips.

A link to the web site is here LINK which gives all the details for any readers interested and going off the comments on the earlier review i guess there are quite a few. 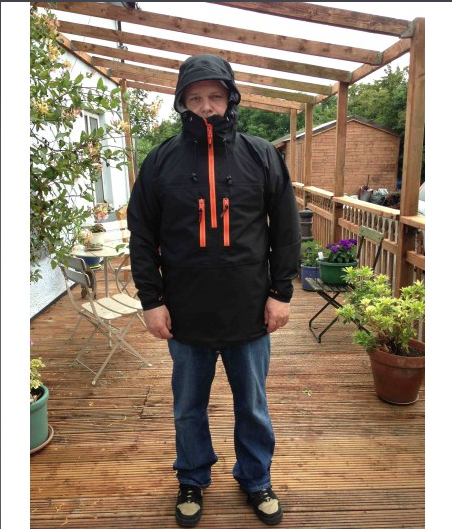 A discount of £40 is offered to purchasers for a limited time. Just put itsmagic14 into the relevant box when ordering.

Looks interesting Alan, unsure about the orange zips though!

Hi Dawn, If you have a look at “The Trend” in outdoor gear then contrasting zips seem to be very popular. Don’t worry, i did also comment to Stanley a while ago about it as i prefer the same colour zip as the outer shell. However, would it be enough to put me off, i don’t think it would. On the red shell the zip colour is blue and it may be a possibility to have a blue zip on a black shell and an orange zip on a red shell. It would make sense to have this option as you double the chance of satisfying peoples likes and dislikes.

I've just bought at discounted softshell jacket, which was entirely black except for red zips. In the end it didn't stop me from buying (although at full price it might have done) but it did cause me to hesitate.

Like you say though, Alan, highlighted zips seem to be something of a fashion at the moment.

Some folk like contrast as much as others don’t. But if the price is ok and it does the job you want then what the hell.

True enough. I'm very much a black/dark grey kind of bloke, but I do see plenty out and about who are more adventurous. I'm definitely the wrong age and shape to carry off anything tight-fitting or fluorescent though.

Same here. I like to wear darker colours rather than the reds we used to wear in the 1960 and 70’s. Although red is the colour for 2015 i am led to believe. What goes around comes around.

I have been reading with interest your comments, the initial launch was with black fabric and orange RIRI Zips, and red fabric with Blue RIRI Zips ....if required the garments can be made with Black RIRI zips as we now have them in stock ( my manufacturer prefers black zips ) and also there will be a mud brown/olive colour coming out in this style pre xmas

Comments are always welcome and a valuable window. I think the black zips will go down well with the less trendy outdoors folk. I put myself in that category BTW. Thanks for making the option available.

I think this will fly off the shelves regardless of colourway. I used to be the "man in black" but then started adding accent colours and in the last few years have been seen strutting around like a peacock.
I'm currently searching for good quality plum walking trousers.
Any ideas?
:-)

I know where you can get some good Plum-bers walking trousers! Ha.
If you want things in plum colours you might have a word with Laura who seems to have a monopoly on that kind of shade. Mind you plum is a ladies colour isn’t it? I will leave it at that.

Well i’ll be plum tuckered. Or you will be when you find/wear plum coloured trews.

I am after some good waterproof trousers.
Maybe not plum.
Hoping Stanley will make some soon, I am going to need a pair for next year if not before.
Bit late on the Jacket for me until mine wears out.
I think the orange is a fine contrast.
Never understood these old fuddy duddy stealth dressers. ;-)

That PHD waterproof should last you quite some time. That was a loud colour if i remember rightly. Stanley is on with some OT’s, so with a bit of luck you should be able to buy some before too long.

I endlessly am waiting on forthcoming to your posts again because I have impressed through your writing. website